We have three main ways to get television.

The simplest is to get over the air broadcasts. We have a crank up bat wing antenna on the roof that via coax cable and a splitter goes to each of the TVs in the RV. The batwing is somewhat directional so you can rotate it from inside the RV to try and get the best signal. This doesn’t work very well for the new digital broadcasts where you tend to either get them well or not at all.

Whenever the batwing is up I put a clothes pin on the gear shift by the steering wheel. Many people have lost their antennas when they drive away with them up. 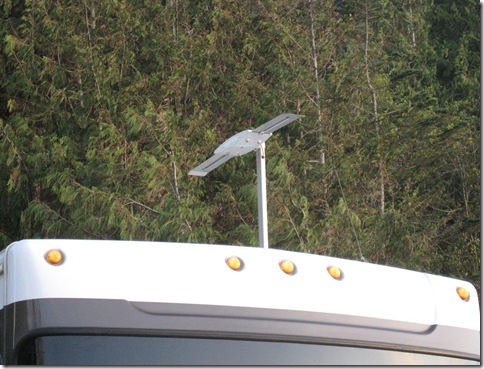 Some campground have cable connections at each site. They usually offer the basic cable channels and sometimes the premium pay channels.

I think we have only been reduced to this one night when we just couldn’t find a hole in the trees for the satellite.

We like to watch our local TV stations from home with local news so we much prefer the satellite connection.

We have only two choices in Canada; Bell or Shaw Direct.

I have heard that Bell customer service can get very rude if they discover that you are not using the system at home. They have even cut people off. I have heard that they are also trying to limit the footprint of their satellite signal to be mostly in Canada.

All the online forums and even the company I bought the setup from said to use Shaw Direct. They are much more RV friendly and they even sell RV rooftop antennas on their own website. It also seems that you can get a strong signal from their satellite even in Mexico.

Jennie has a two tuner HD PVR on her TV and I have a regular HD box on mine. With the Shaw dish this means I have to run three separate coax cables all the way out to the dish.

Shaw offers two sizes of dish. I chose the larger one because I wanted the best signal possible even if I was on the fringes of the reception area.

The are many mounting systems for the dish. I chose the cheapest which is a tripod you stake into the ground.

The other easier to use options are usually mounted on the roof of the RV. The simplest just crank up and must be aimed manually. Most people these days buy the automatic ones that use a GPS to determine your location and automatically lock on to the satellite. Some are even inside domes and can be used while driving down the highway.

They also now make little carry out version of the domes that don’t have to be roof mounted.

If I had gone with Bell, the advantage is that they use the same system as DirectTv and DishNetwork in the US so that you can use the same dishes and therefore get the automatic ones much cheaper.

Shaw uses its own system so the dishes are specific to Shaw. They are also much larger than the Bell dish and would not fit in a dome or carryout box.

I don’t think I will ever get a roof mounted antenna. We have been in too many tree’d campsites where no matter where I parked the antenna would be blocked. Even if I did get one I would still carry the tripod around.

I have a program on my laptop that tells me the azimuth/direction and altitude/height to find the satellites based on the nearest city.

I take my compass and first find a location where there is clear sky in the direction needed. If there are trees I use the compass as a protractor to see if the satellite is over the trees.

I take the tripod, set it up and put a magnetic two direction level on the post. Finding the satellite is much easier if the post is absolutely vertical. As the tripod legs are fixed length I use some wooden wedges I made to level it.

To hold the tripod down I use one of the giant screw in pegs people use to tie their pet leashes to in the backyard. I use a ratcheting cargo strap from the peg to the tripod and really crank it down. 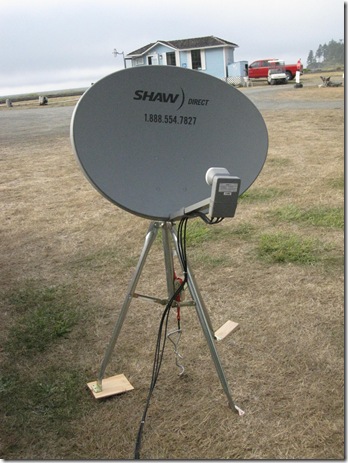 At first I had tried to use tent pegs and bungee cords to hold it down. The first big wind storm blew it over and broke the arm off the dish. I have seen other people use hanging gallon jugs of water. I would never trust that.

As I said I need three coax cables out to the dish. I have three 100 foot RG6 cables tie wrapped together wound onto a garden hose reel. I just lay the reel on the ground by the RV and unwind what I need to get to the dish. 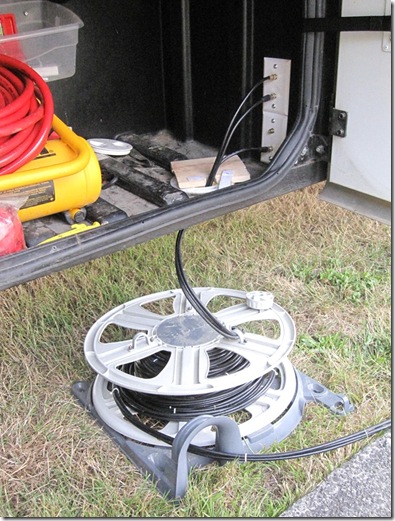 The dish and the arm won’t fit in the bay when attached so I have to put the arm back on each time I use the dish. I also set the correct elevation before I set the dish on the tripod. I swapped out all the nuts that came with the dish for wingnuts so that I don’t need tools to make the adjustments.

Once the dish is on the post I use the compass to point it as close to the correct direction as possible.

Then on go the TV and PVR to the installation screen. Jennie stands by the TV as I move the dish is small increments until we get a signal. If we are out of shouting range we use the walkie talkies.

While this sounds time consuming, from the time I walk out the door we are usually completely set up in under 5 minutes.

Even with the system I have, in a really strong wind the dish acts like a big sail and can spin the post off alignment. All it takes is a degree or two we lose the satellite. The post is only held in place by 3 bolts top and bottom just pressed up against the pipe. When this happens I just have to go out and tweak it a bit back in place. When I can, I place the dish out of the prevailing wind. I need to come up with a way of preventing the pipe from twisting.