I picked this hike from my guide book because it said the views were “The best in the Poconos”. Well, the best views were from the parking lot and even then you just looked down onto a sea of green trees. The hike turned into being just exercise, which is not bad, but we always hope for more.

The day had a bit of a worrying start. As we got close to the exit off of the interstate for the park, traffic to exit was backed up onto the highway. I could see that there was an outlet mall near the exit so I hoped that was where everyone was going. As we inched along everyone went right by. Then I remembered that there was a water park near the state park. We passed by a huge hotel with water slide pipes sticking out the side but everyone still went by. Surely everyone wasn’t going to the state park. Finally we got to a massive outdoor water park and we lost everyone. There were 4 other cars in the parking lot in the state park.

Big Pocono State park is on top of Camelback Mountain. Mountain is a bit of an overstatement as the top is only 1500 feet above sea level. It is the highest point for a long way around and since it has a ski resort on the side I guess they had to call it a mountain.

We did a 4 mile, fairly flat,  looping trail around the top.

We parked in Lot 2 right at the top. The view was open to the north and south but there was not a lot to look at. 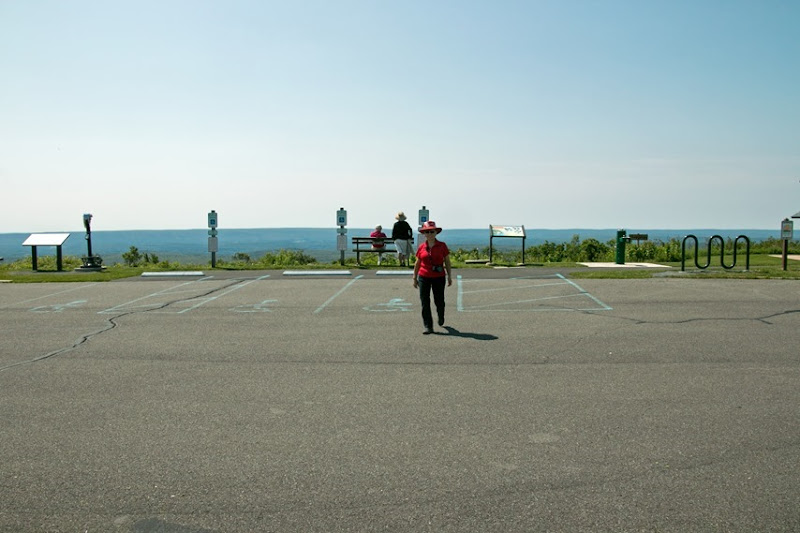 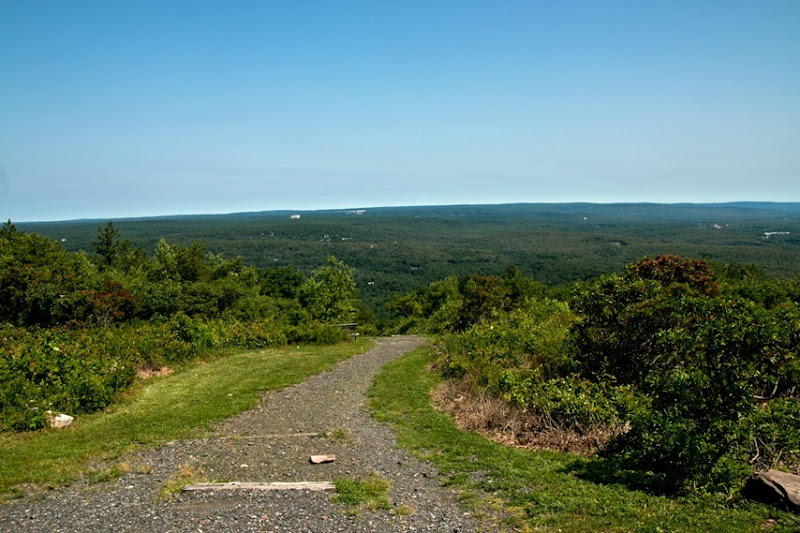 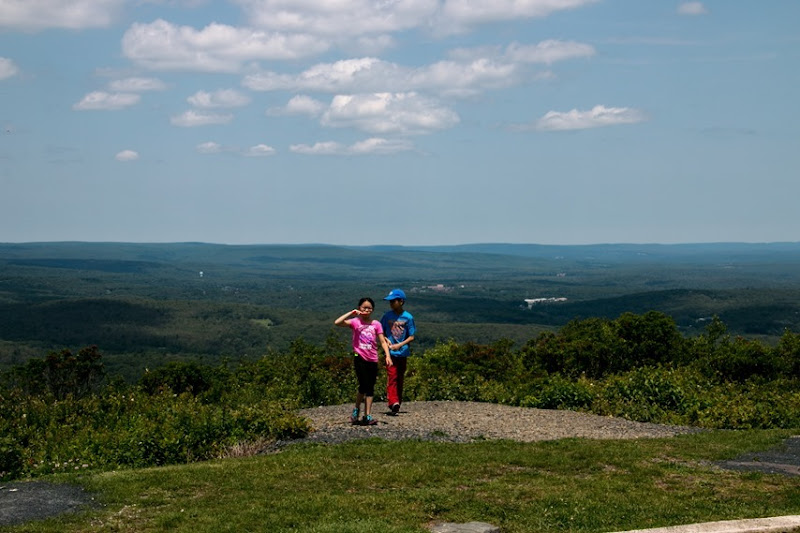 To reach the trailhead you first have to walk back down the access road for almost a mile.

At parking lot 1 there was an observation tower but it had a small sign saying that it was illegal to climb it. It was tempting. 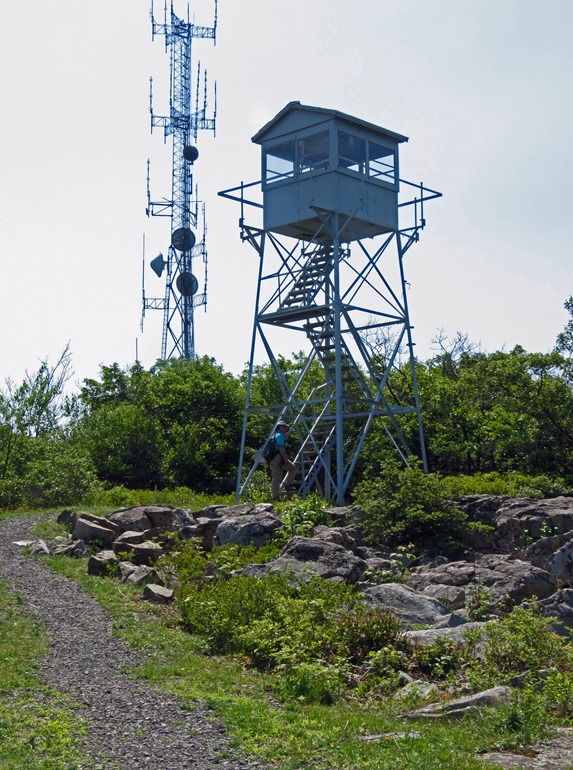 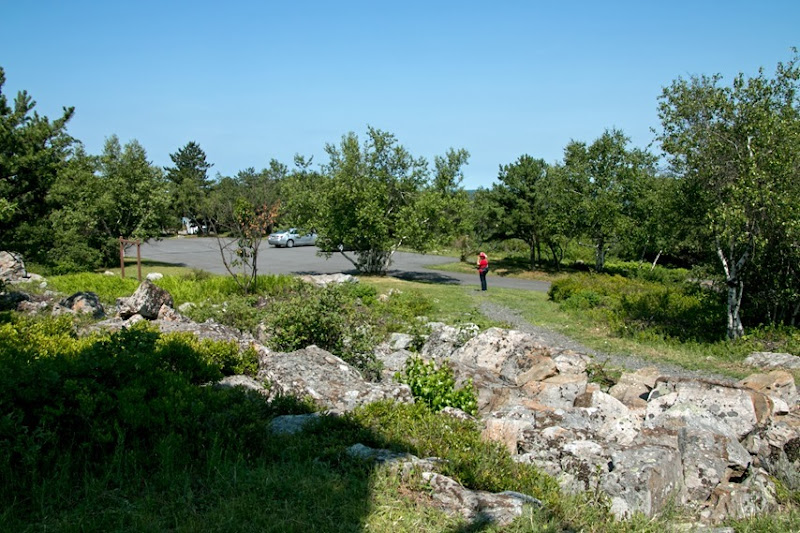 A little father down the road there was a helipad. I am not sure how much use it would get so far from everything. 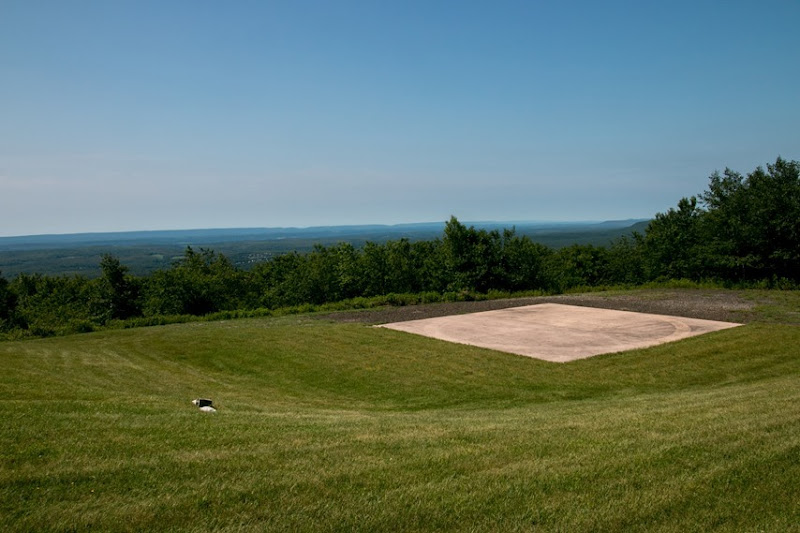 There was s small garden by the helipad. 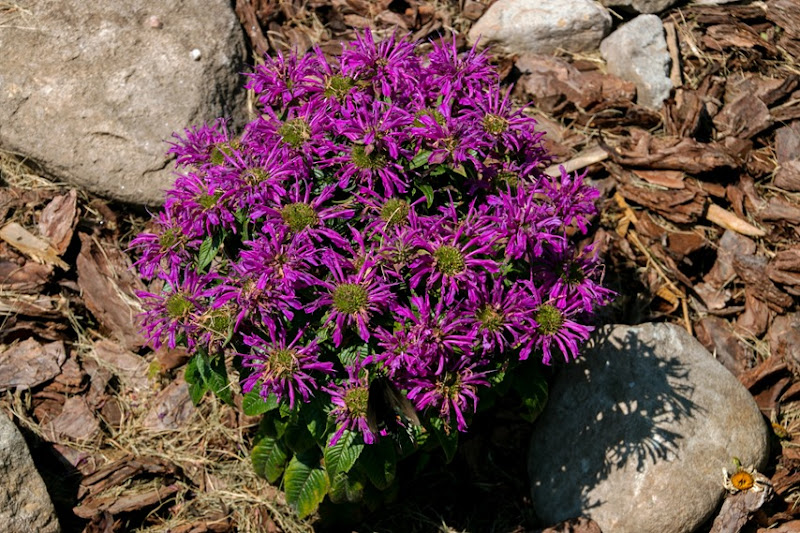 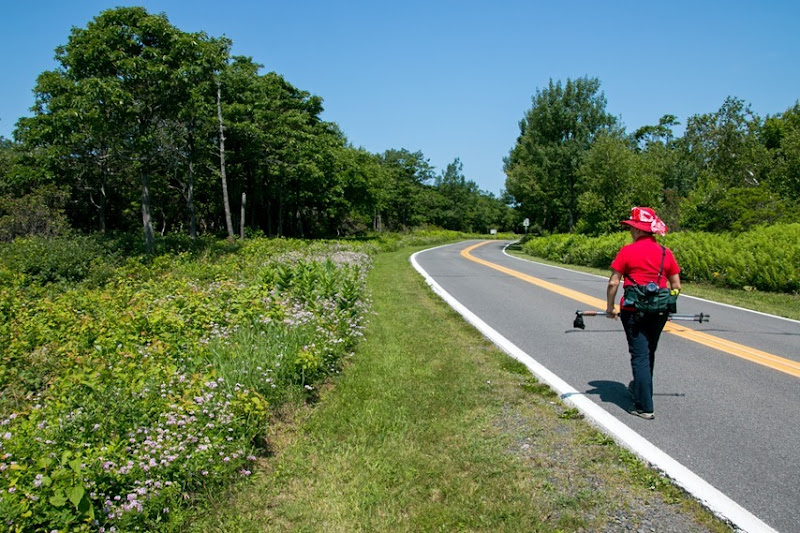 It was pretty hot out in the open so Jennie found what shade she could. 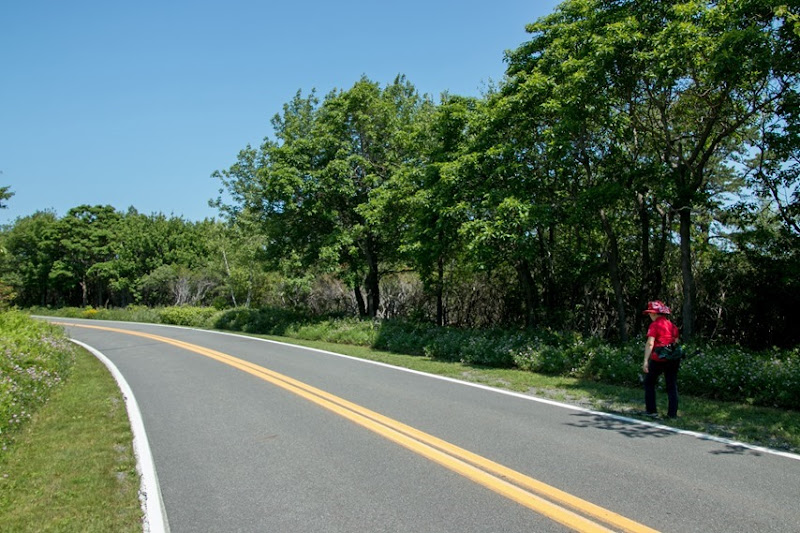 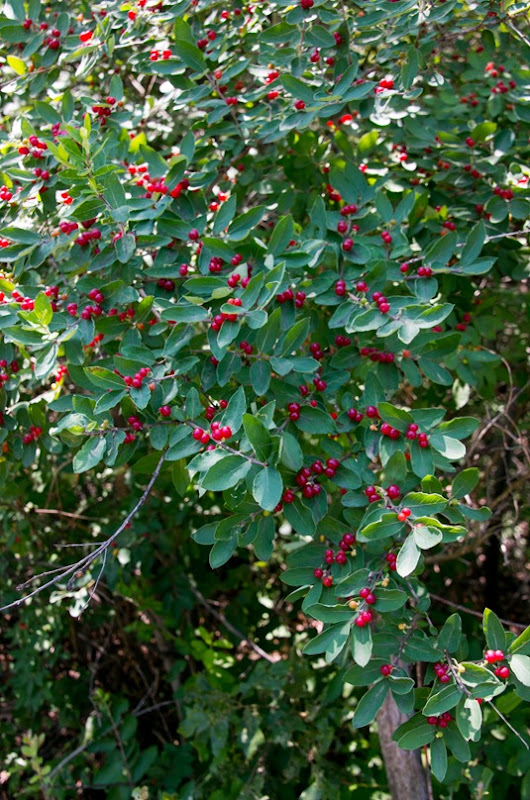 This was the start of the trail. It is marked for hiking, biking and horseback riding but it look like no bike or horse and very few people had ever used it. 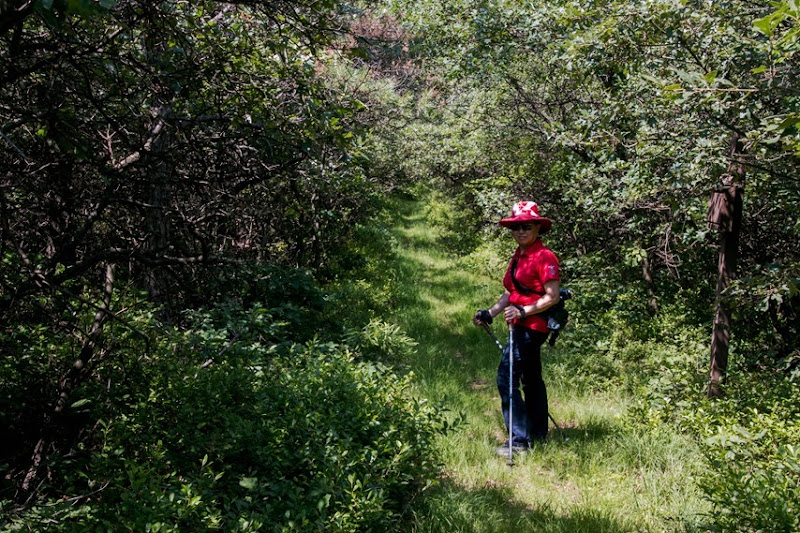 A nice forest walk but no views. 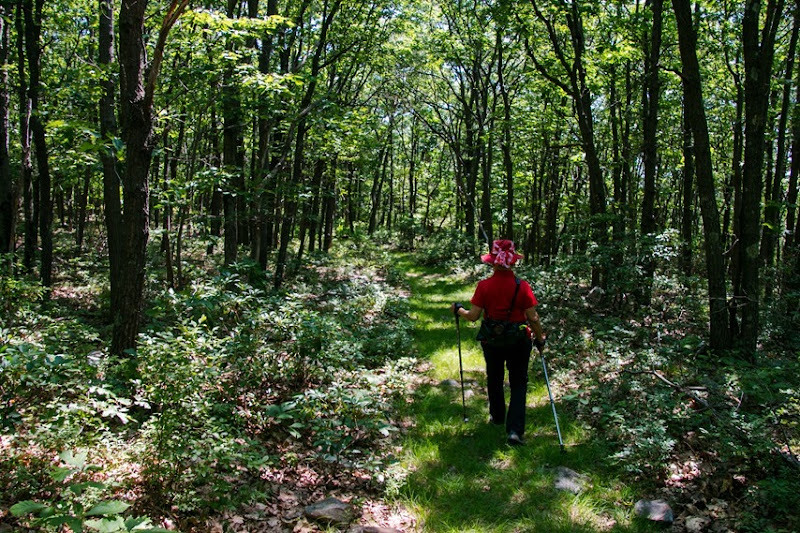 The only times during the entire 4 miles that we could see anything but forest were the three spots marked with cameras on the map.

I almost forgot to take a picture at the first one. I did forget at the second. 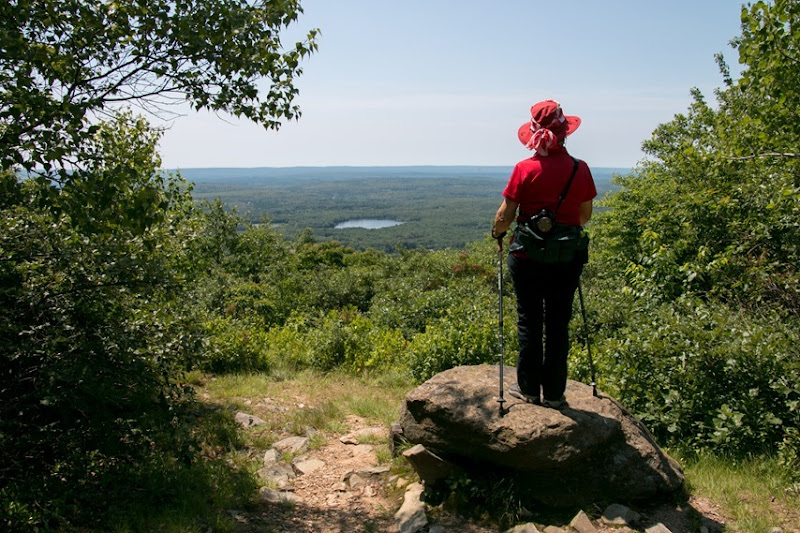 The 1.3 mile loop at the east end, call the Indian Trail, was very rocky. This was the worst spot. 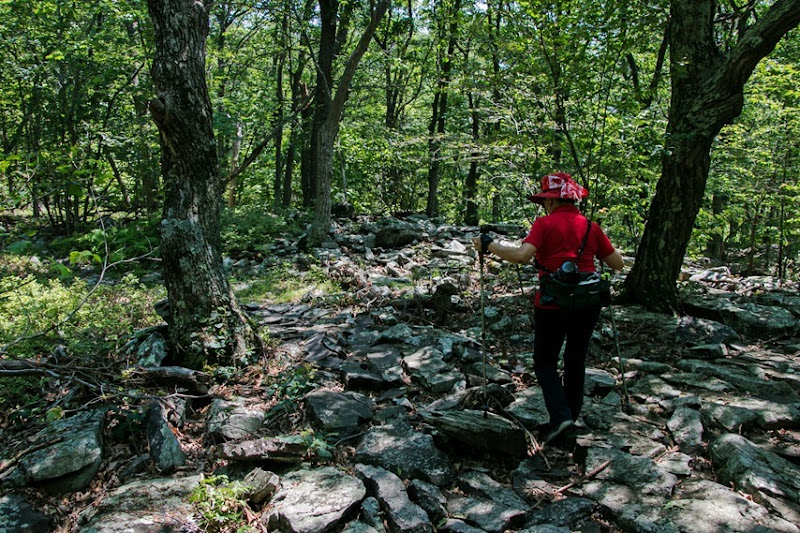 Whereas the other section had been almost flat, this one dropped down to the viewpoint, which meant a climb at the end. 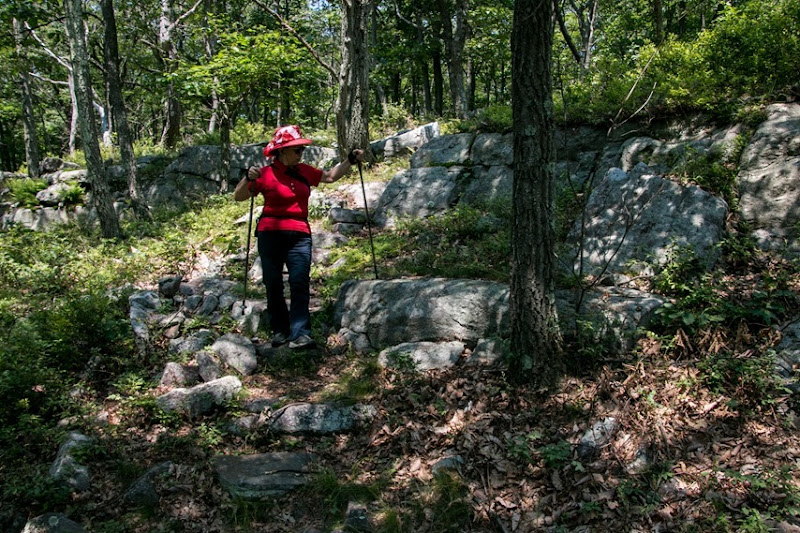 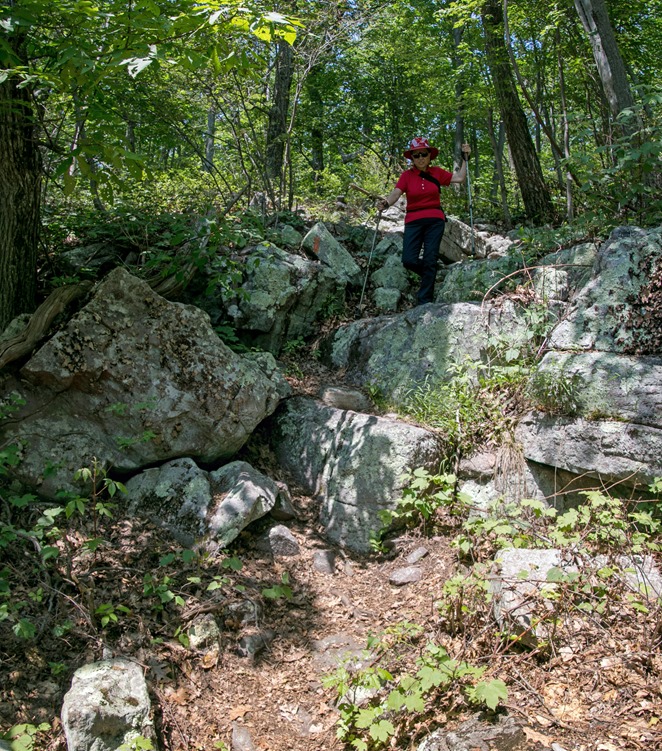 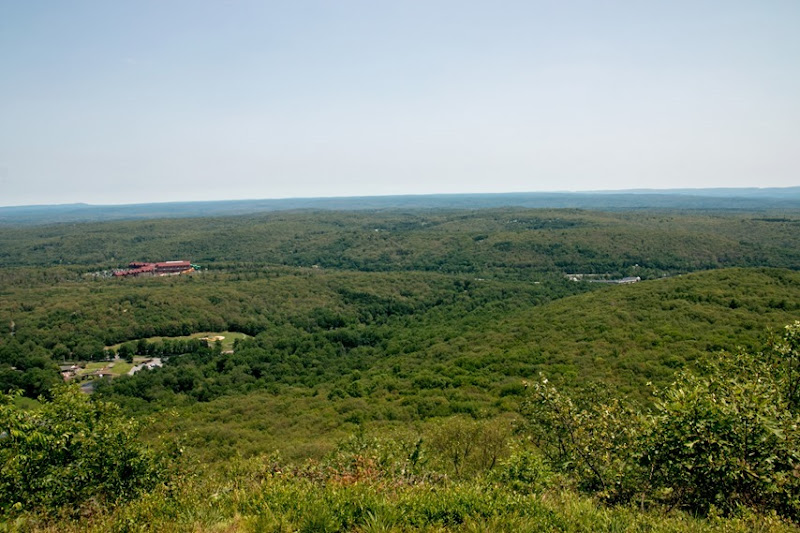 We could see the first lodge and water park we had passed. 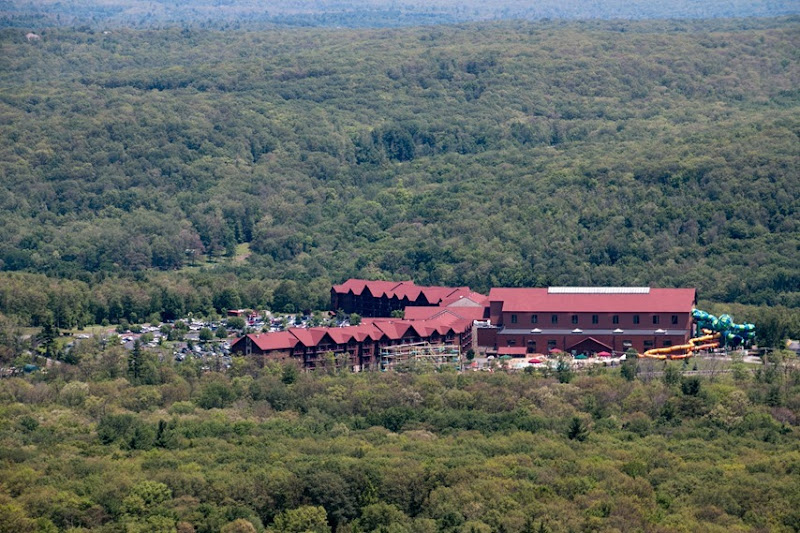 We were going to have lunch here but there was no where to sit that was in the shade but still had a view. Onwards. 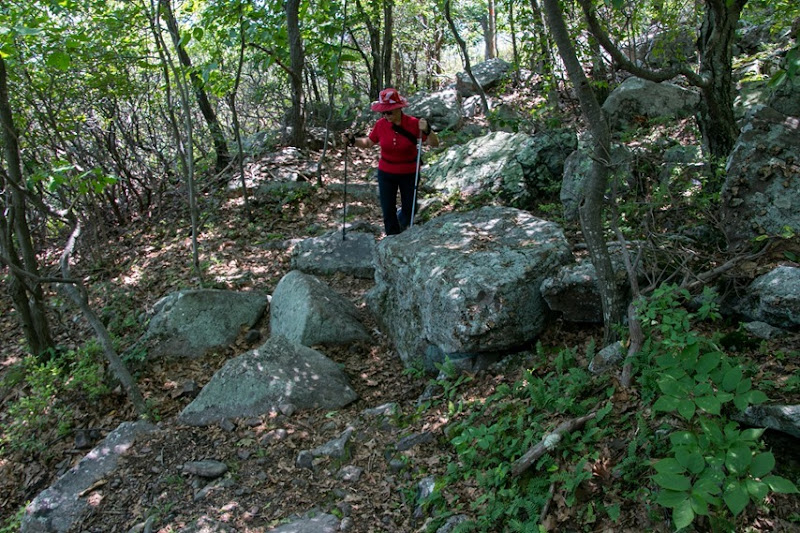 Back up to the car. 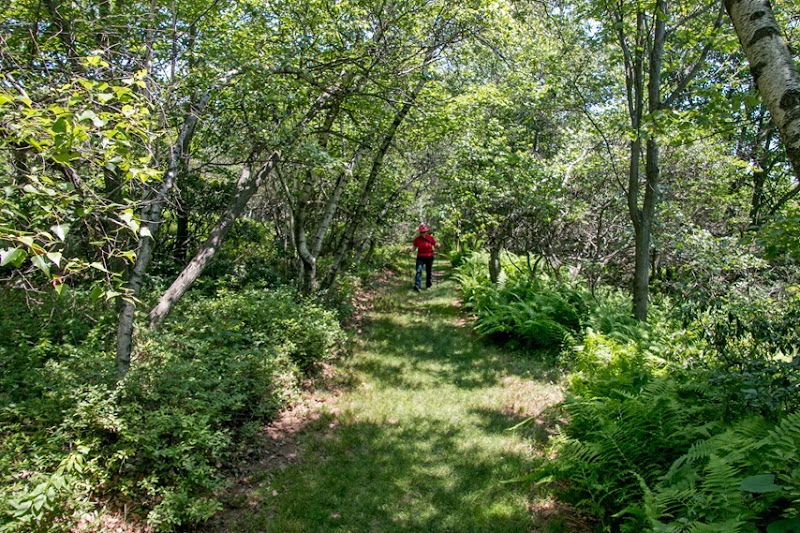 We found a nice shady table. 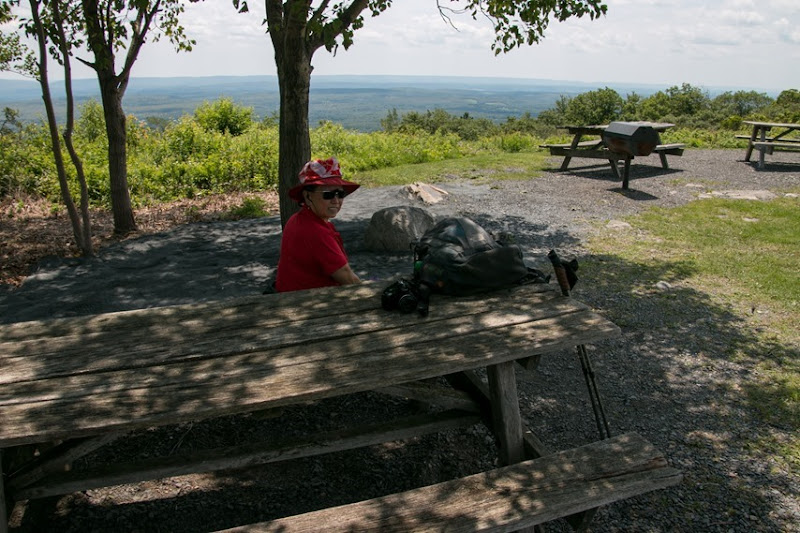 Just a short way back on the access road you could park at the restaurant at the top of the ski hill and look down on the water park.

It was very large. 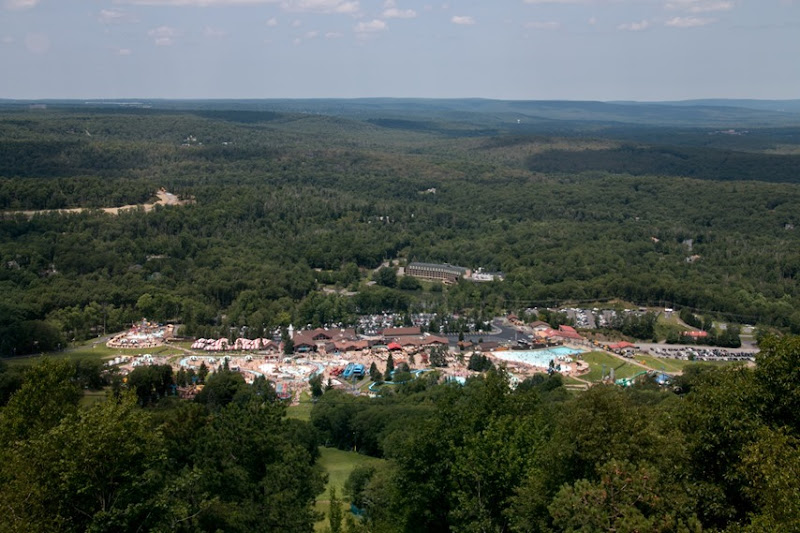 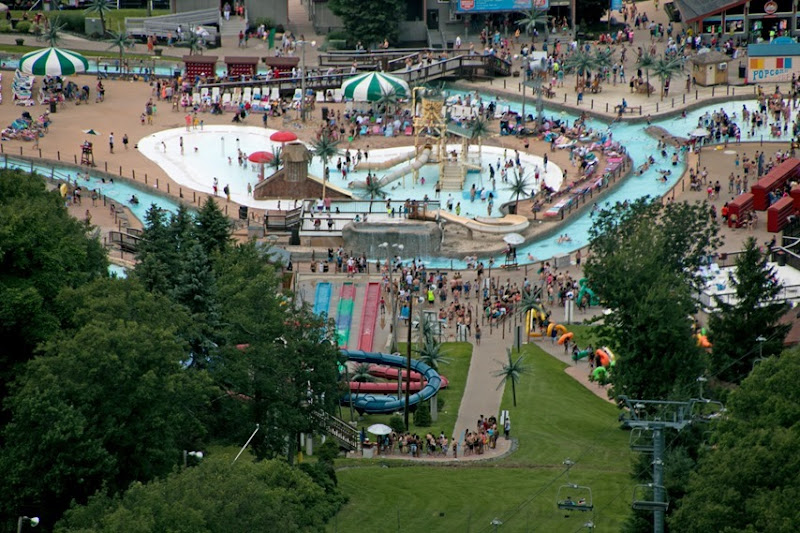 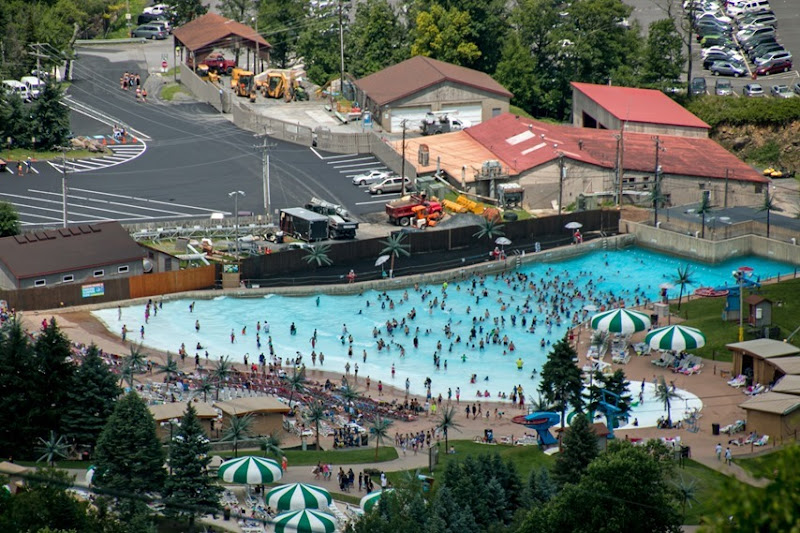 Right beside the restaurant was the top of the zipline. 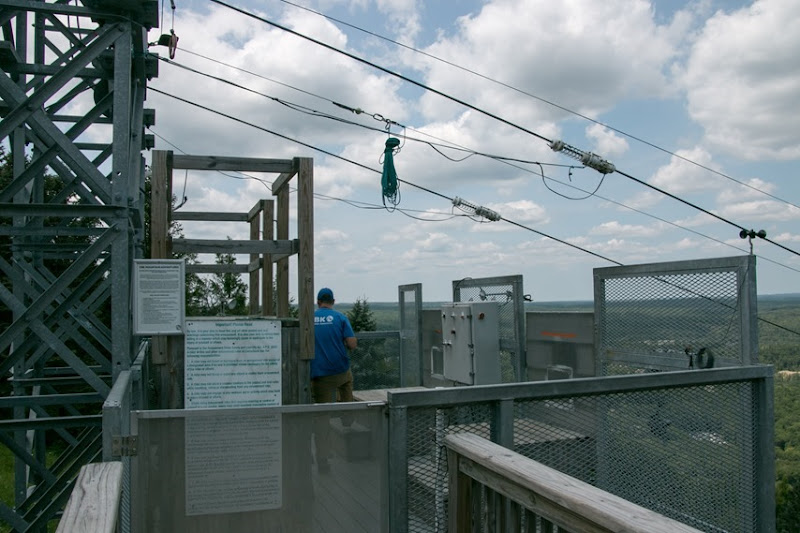 The guy said that it is a 4000 foot ride down to the bottom. 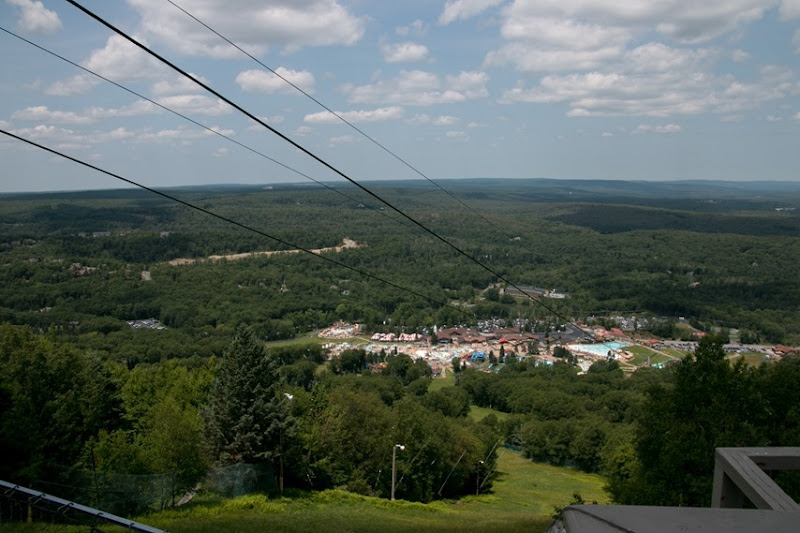 He also said that on what would normally be one of their busiest days of the year, it was broken and they were madly trying to figure out how to fix it.

You could also take the chair lift up from the water park. It was a little weird to see people in bathing suits wandering around up here. 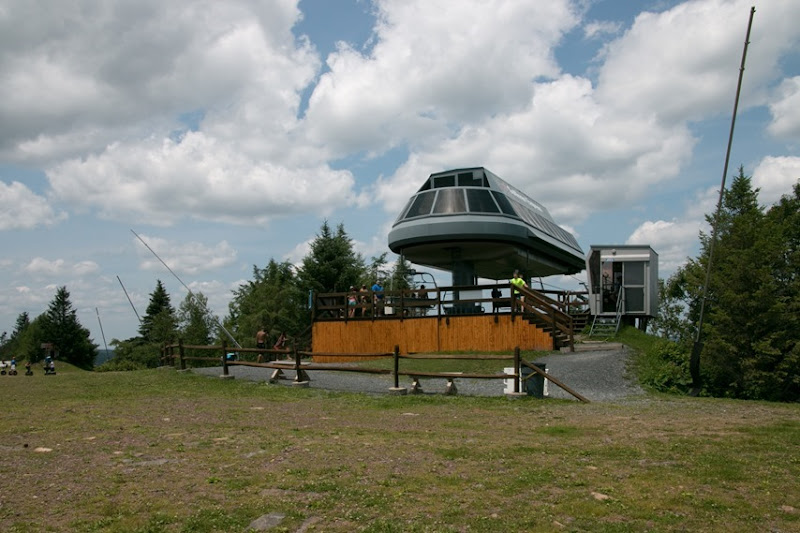 We wondered about this group on the Segways. I guess they get a ride up and then take the Segway down one of the easy ski runs. 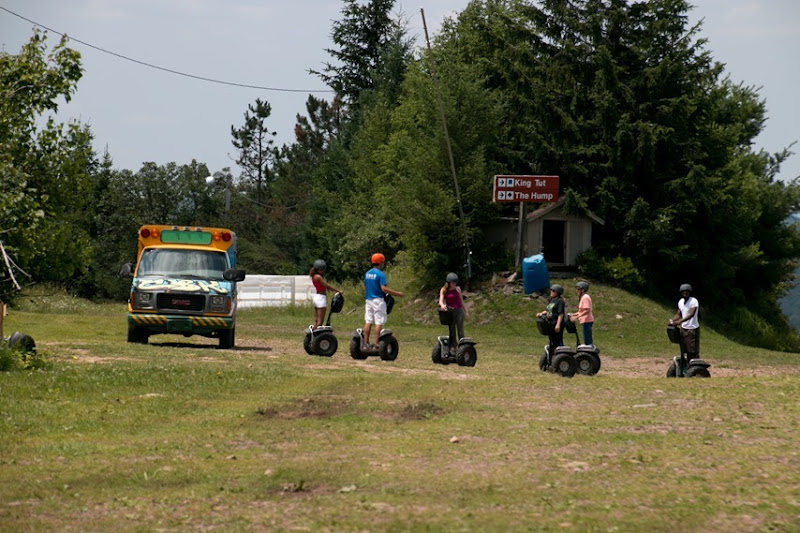 Back at the campground it is really busy. There was a line up at the gate as there were so many people checking in. I think the park is full because there were some people in tents paying the premium price for the full hookup sites. 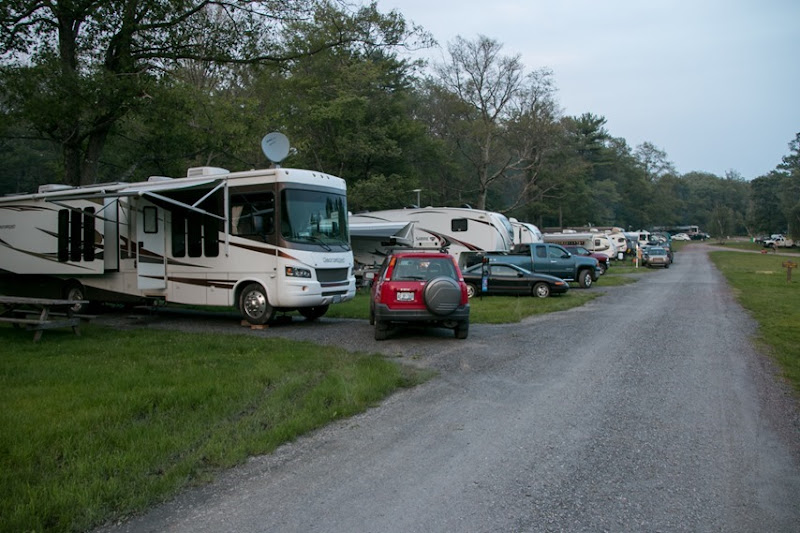 Compared to when we checked in. 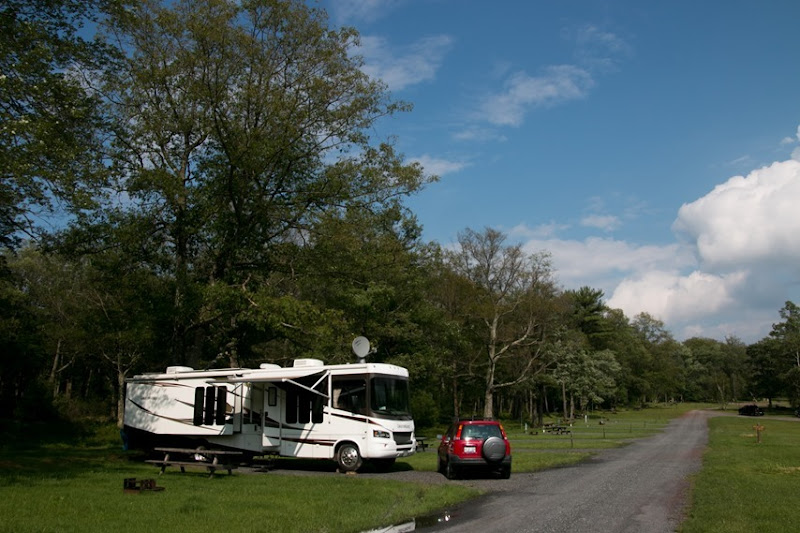