Life in our RV – Part 9 – Heating and Cooling

The RV is fairly well insulated. The floors, walls and ceiling have about 2 or 3 inches of Styrofoam and all the windows, except the windshield, are double panes of glass and have a pretty heavy tint on them.

If it is very hot or very cold, we close the heavy curtains we installed behind the driver and passenger’s seat.  This stops some of the heat loss or gain from those large windows up front and also reduces the interior volume of the RV a bit so it is easier to heat or cool. It does darken the RV quite a bit though. 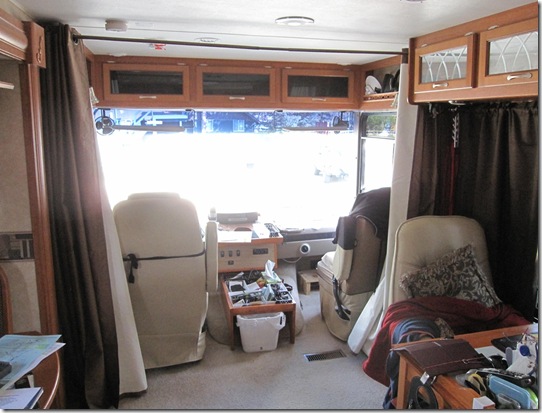 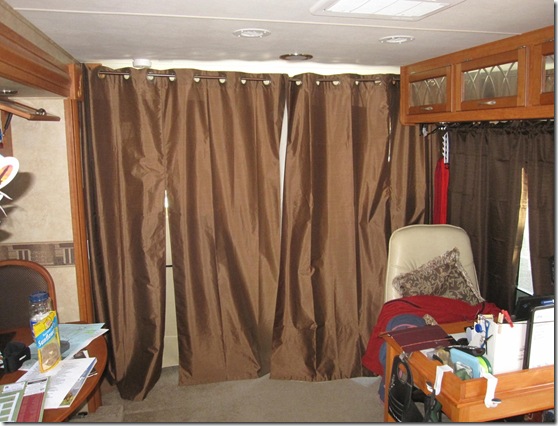 The simplest cooling method is the roof vents. There is one in the bathroom and one in the kitchen. The bathroom fan is a very basic one that doesn’t move much air and is very noisy. 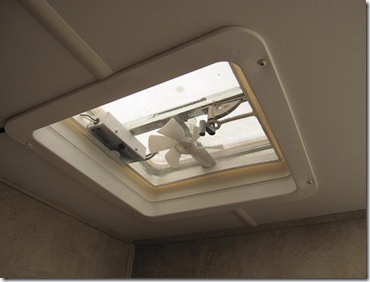 The kitchen  one is an upgrade called a Fantastic Fan. It is very high volume and fairly quiet. It has 3 speeds and can also be set be thermostatically controlled and only go on when it gets hot. You can even optionally get wireless remotes for them. 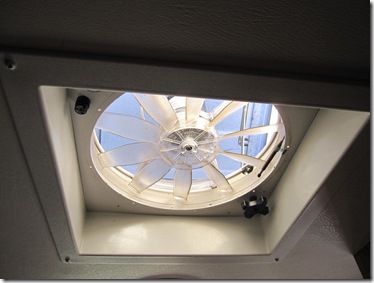 They come with a crank up lid to prevent the rain from coming in when they are not in use. Most people buy extra covers that allow you to leave the lid open and run the fan even in the rain. The Fantastic Fan needs a bigger cover because of the higher air volume. 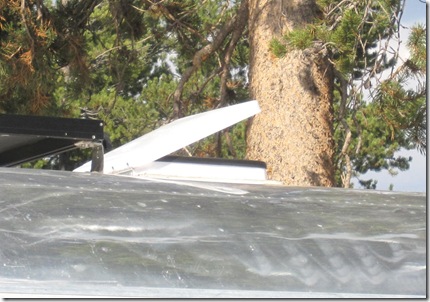 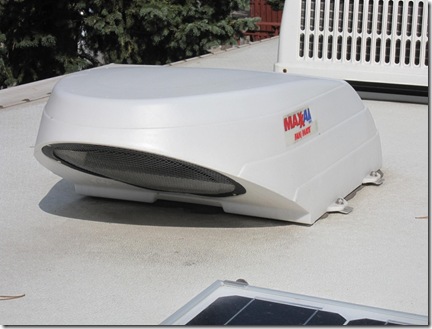 The RV has two roof air conditioners to do the real cooling. A 15000 BTU unit on the front and a 13500 BTU unit in the bedroom. You need two because they don’t make a single one that is large enough for this much interior space. 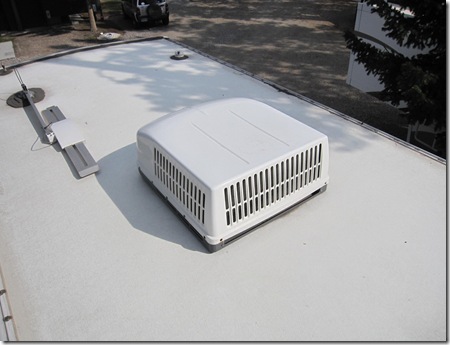 The AC’s can each be set to just blow straight down or to blow through the set of ducted ceiling vents distributed throughout the RV. When you are hot it is wonderful to stand under it blowing straight down! 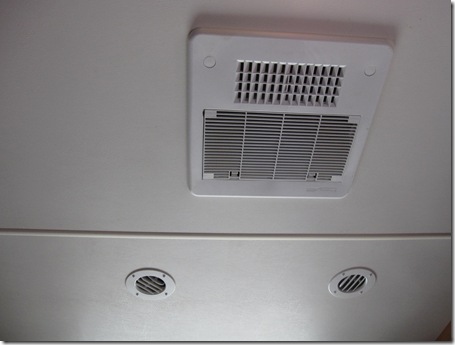 You need to be on a 50 amp electrical hookup to run both at the same time. They have a high startup current and if they both started at the same time they would blow a 30 amp breaker.

Surprisingly, we have not yet been anywhere that we felt we had to run the air conditioners or fans at night. If we had to, we could probably leave the front one on and it wouldn’t be too noisy for sleeping.

We normally don’t spend much of the daytime in the RV so if it is going to be hot, we leave a side window open a bit and the kitchen fan on low, just to circulate the air. I also leave the front AC to come on at 29C so that it doesn’t get too hot. Once we get home the two of them can cool us off pretty fast. Even one does an OK job if we are only on a 30 amp hookup.

We have noticed that, if the side of the RV is facing the sun, having the awning extended greatly reduces the amount of heat coming in the window by Jennie’s desk. I think I am going to have to buy some small awnings for the window by the dining table and for the one by my desk.

We replaced the curtains on most of the windows with insulated, light blocking versions. They help quite a bit with the heat but they make it very dark inside the RV. We will probably switch back once we get the awnings.

The RV comes standard with a 35,000 BTU propane furnace that blows the heated air through ducts in the floor throughout the RV. We almost never use it. For one thing the 12  volt fan used to blow the heat through the ducts is very loud. For another they are very inefficient. The furnace uses a lot of propane and if you feel the outside exhaust vent you can tell that a large percentage of the heat is being blown away.

We bought two 1500 watt electric box heaters ($20) to use as our main source of heat. We can only use these when we have an electrical hookup because they would quickly kill the batteries. Normally we only use one of them and it can maintain a very comfortable temperature even if the outside temperature gets down around 0C. I only use the second one if we want to heat things up quickly and if we are on a 50 amp connection. We also have a small desktop fan that helps distribute the warm air around the RV. 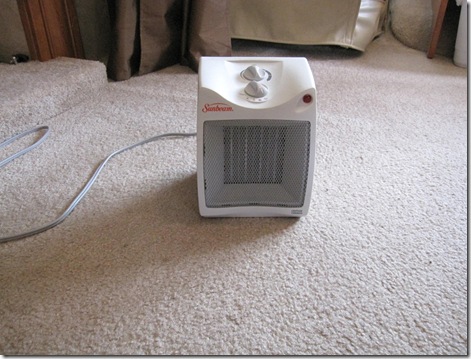 Another advantage of the electric heaters is that we don’t pay extra for the electricity as it is included in the nightly campground fee.

We never heat the RV when we are out or when we are sleeping. We have a thick comforter on the bed and that has kept us warm even on some below 0C nights. Jennie has worn a toque on a few of those nights though. When we first got the RV we bought an electric blanket but we have never actually needed it. The one time we used it we nearly roasted even though it was very cold inside.

If it is really cold out I do leave the furnace to come on if the the inside drops below about 5C to protect things from freezing.

On those cold morning I usually get up about 1/2 hour early, turn on one or both of the electric heaters and then run back to bed. By the time we get up the temperature has usually risen by about 10C to an at least tolerable level for us to get ready before we leave for the day. I have a heavy duty timed outlet at home that I will bring next time to turn the heater on for me in the morning.

The only time we do use the propane furnace is when we are staying without any electrical hookup and even then very sparingly. Maybe first thing in the morning or a few time during the evening. We would rather dress warmly than listen to the racket from the fan. The fan also uses a lot of battery power.

The appliances that can use propane are the cooktop and oven, the refrigerator, the water heater and the furnace.

Normally we run the refrigerator from the 120V AC. If the power goes away it will switch to run on propane. You can also force it to always run on propane even if power is present. We use this setting when we are without hookups because if I turn on the inverter I don’t want to power the frig from the batteries. It draws about 35 amps. When we are on the road I do let it be powered by the inverter because the engine’s alternator is keeping the batteries charged. I also like to turn off the propane when driving for safety’s sake.

Jennie hardly ever uses the oven as you have to manually light it each time and she would rather just use the toaster oven.  She also stores all her pots and pans in there.

I will talk about the water heater in another post on the water system.

The RV comes with a 24 US gallon propane tank. 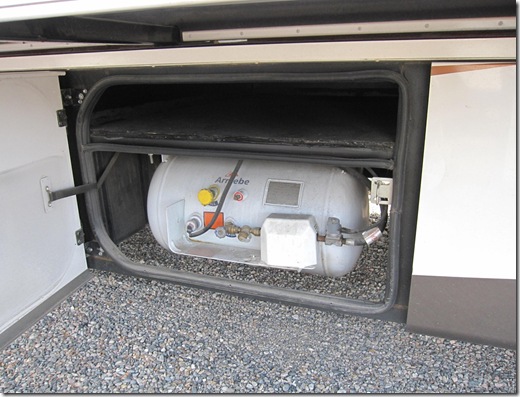 We do have a portable BBQ. I bought a I fitting that allows me to run it off the main propane tank. We don’t seem to use it much though, as it is a pain to take out, use, clean and put back. Also, the tank and the space big enough for the BBQ are on the far side away from the door. If we start staying longer at each place we will use it more often.

The fitting also allows you at add an external propane tank. If you were at a site for a long time and didn’t want to move the RV just to fill the main tank you can just buy a portable tank, connect it up and use it as though it was the main tank. Though from the amount of propane we use and the amount we move around, it will be a while before I need this feature.