On December 21 an ice storm blew through Southern Ontario moving eastward. During the evening the power flickered off and on quickly several times. A little after midnight it went off and didn't immediately come back on. With no TV, internet or lights we just bundled up and went to bed.

In the morning there was still no power. The outside temperature was around 0C and it had dropped to around 15C in the house.

We have a propane catalytic infrared heater that we use in the RV. It is safe to use indoors at it only produces CO2 and water vapour as its products of combustion. I connected it to the propane tank from the BBQ and it kept us toasty warm as long as we kept close. We spent the day in the solarium, where it was nice and bright, just reading books on our iPads. The temperature in the rest of the house dropped down to about 12C. In the evening we brought the heater to the bedroom and continued our reading until our eyes started to blur.

I don’t like leaving the heater on when we are not watching it so we just piled on the blankets and went to sleep. Around 1am our power came back on. Hallelujah! I got up to check that everything was ok and that the furnace and hot tub had restarted properly. I noticed that the houses behind us were still in the dark.

The next morning we were not quite back to normal. The cable TV and internet was not working so even though we had power the place where our cable was fed from did not. Another day of reading but at least we were warm. We found out that we were very lucky as many other parts of the city are still without power.

In the afternoon we decided to go for a walk around the neighbourhood to see what damage had been done. Since it was still very icy out we put on the crampons we had bought when we were hiking in the mountains on one of our RV trips. 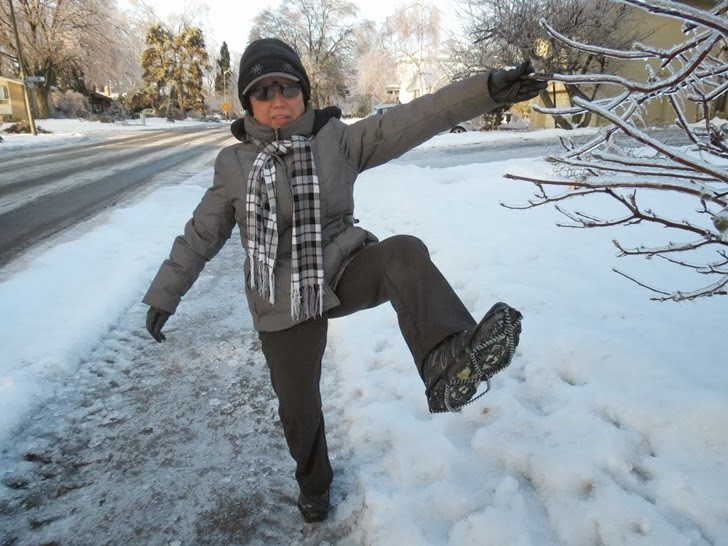 They are just a set of metal springs attached to a rubber frame that goes around your shoes. They worked amazingly well and we didn’t slip once.

If you ignored the damage it caused, the ice looked quite beautiful on the trees. 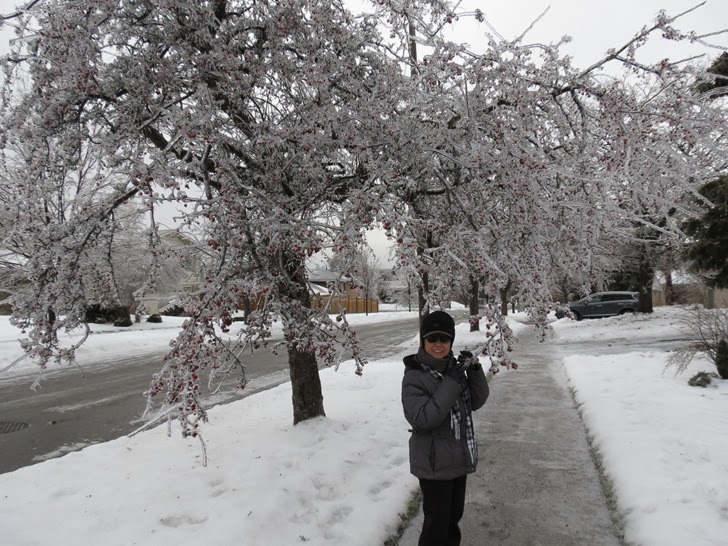 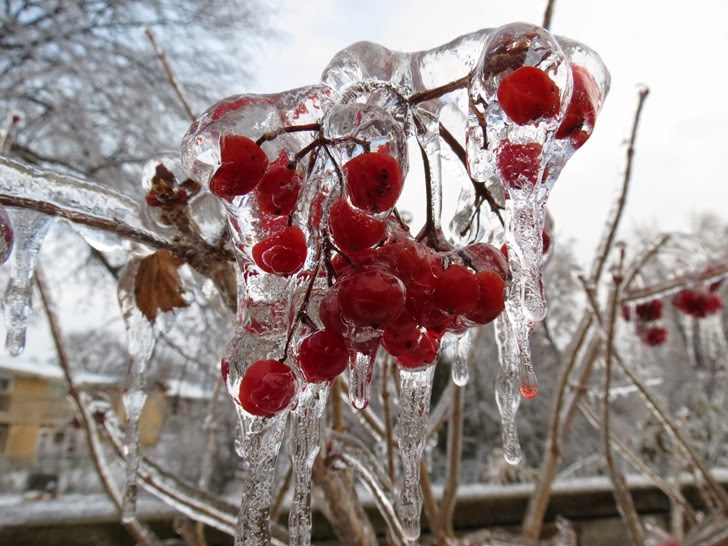 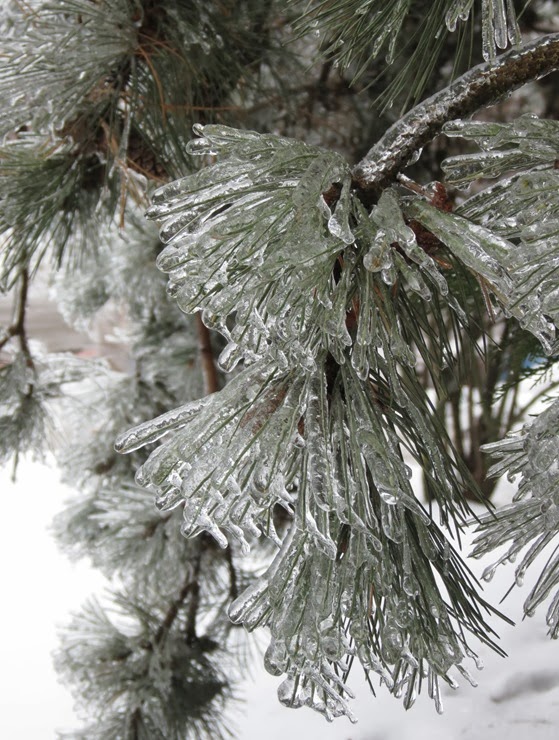 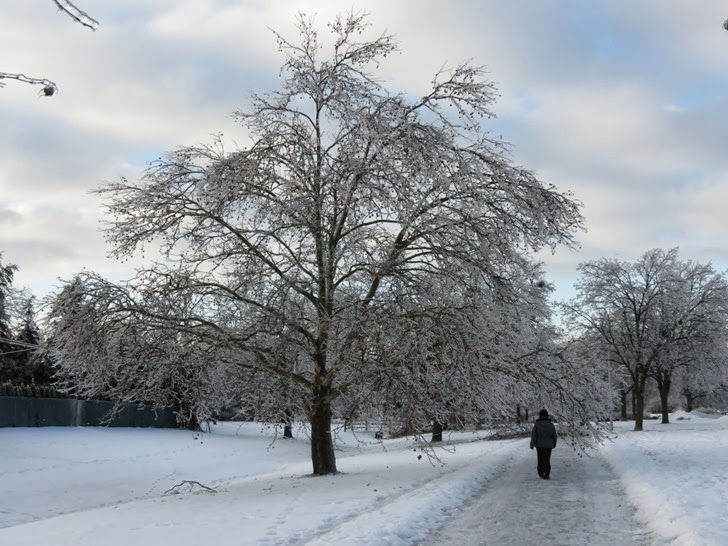 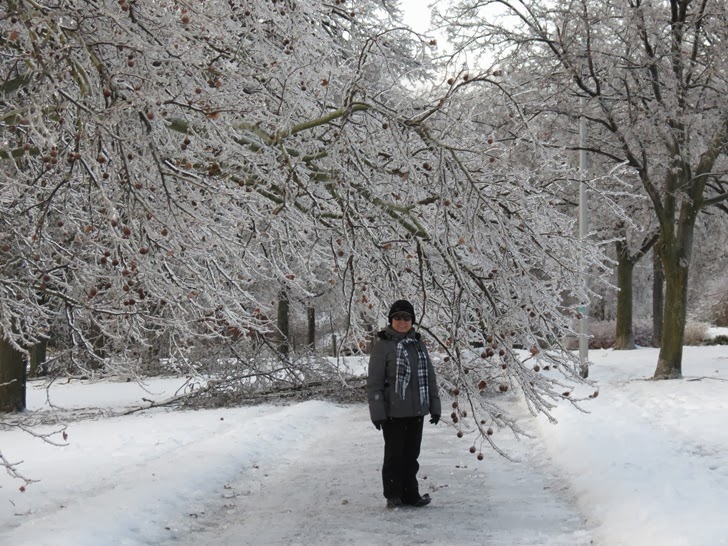 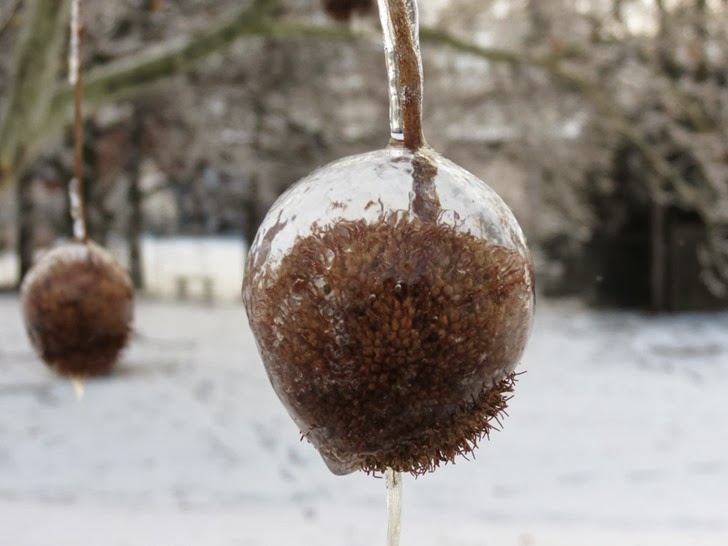 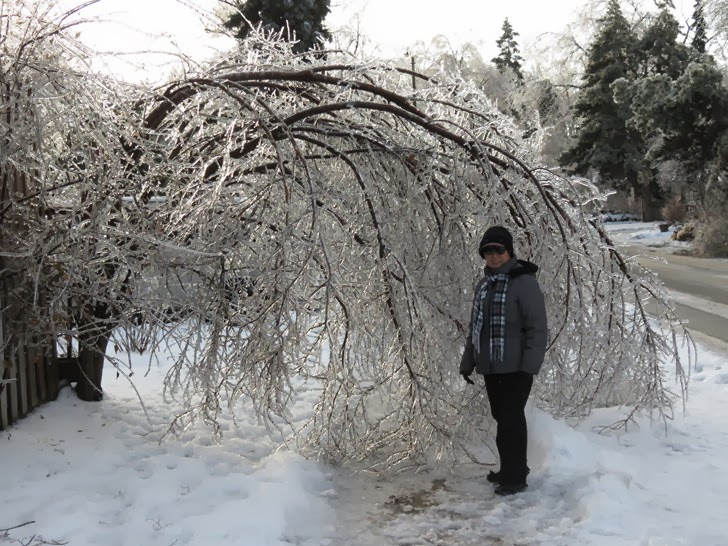 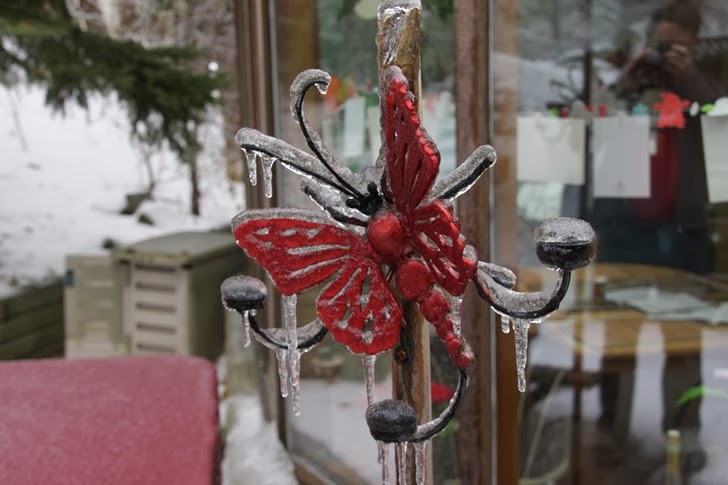 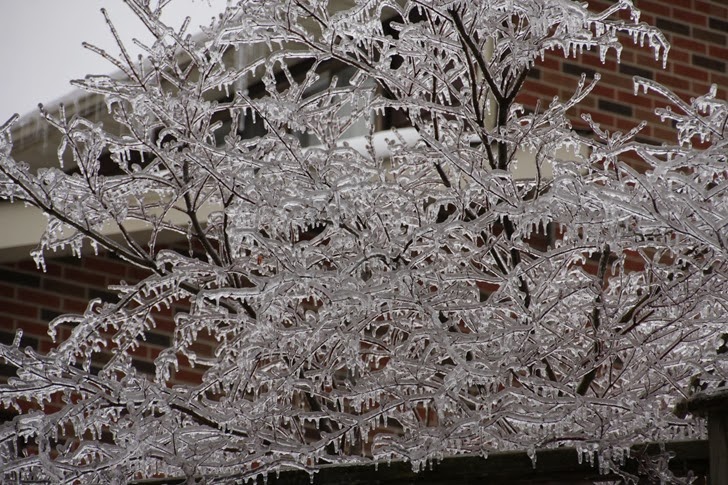 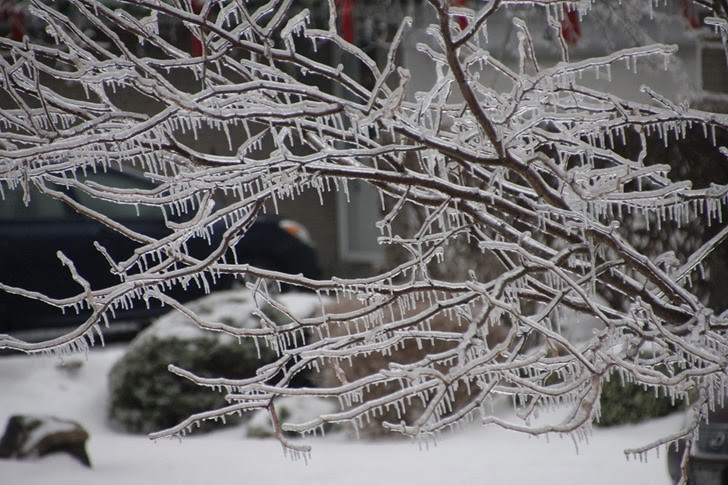 But the damage was hard to miss. The next two pictures are from one person’s back yard. 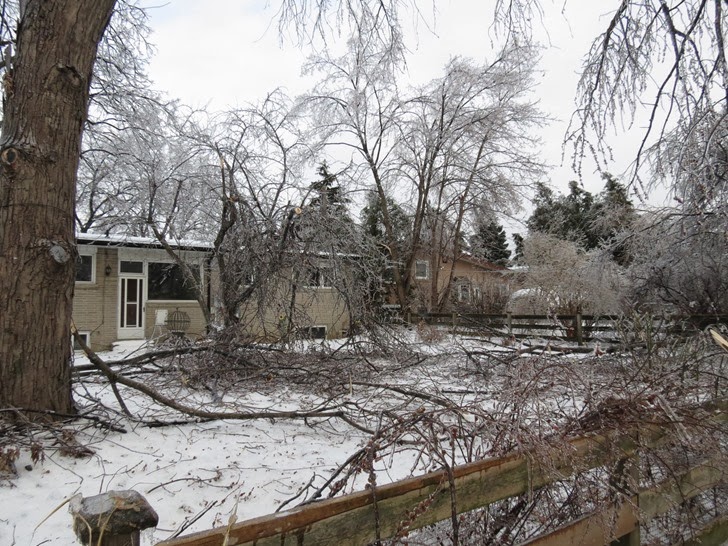 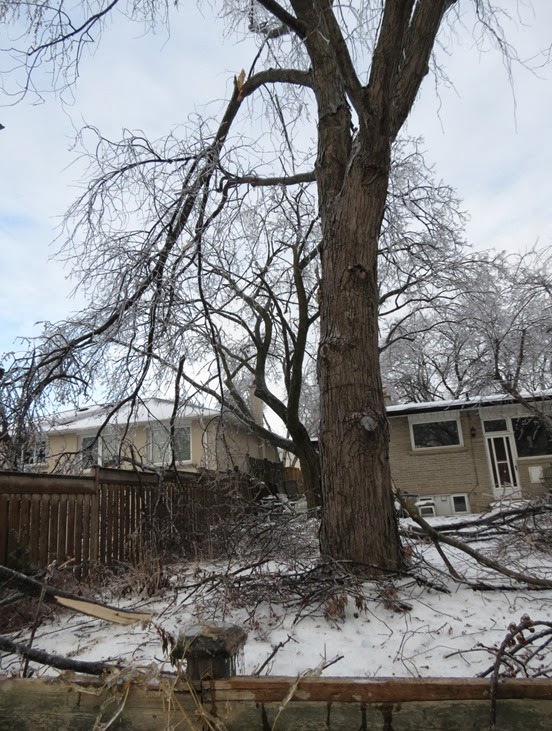 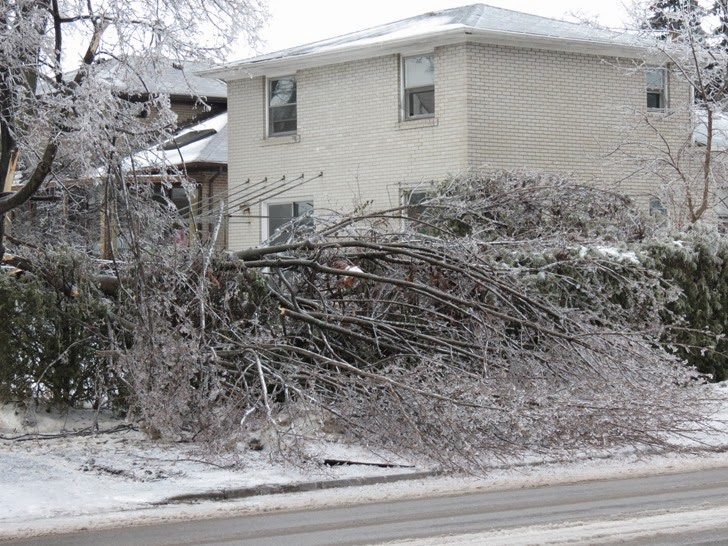 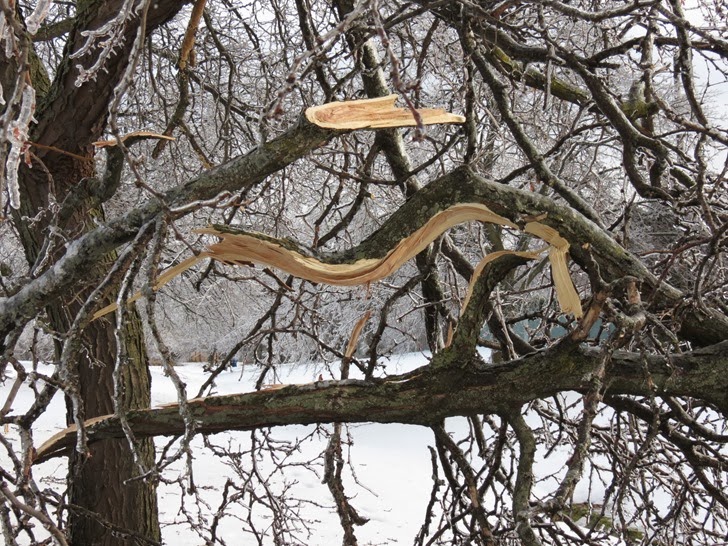 Our house got off pretty easy as only one branch of our birch tree got bent over. I doubt it will spring back so we will probably have to cut it off. 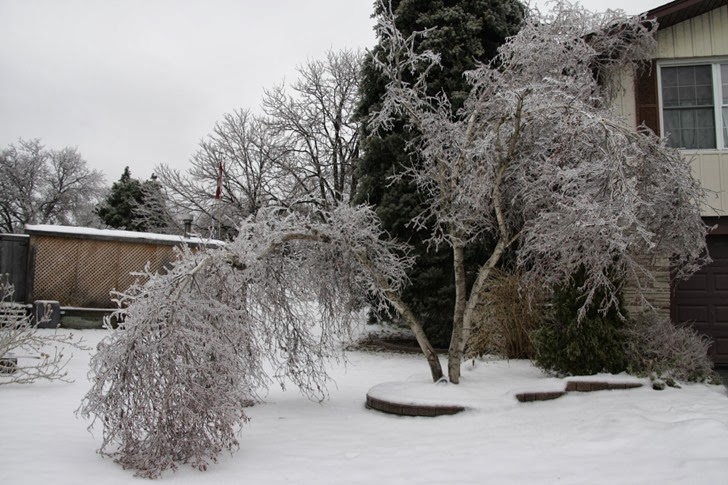 Part way through the walk the sun came out and made the trees sparkle. 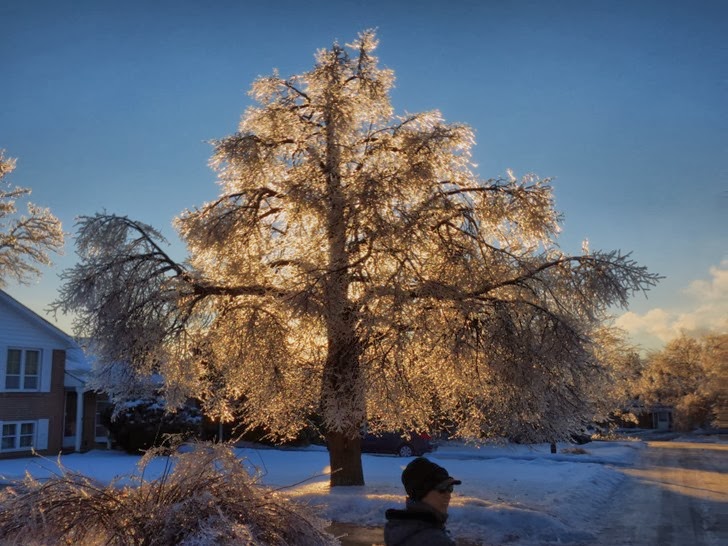 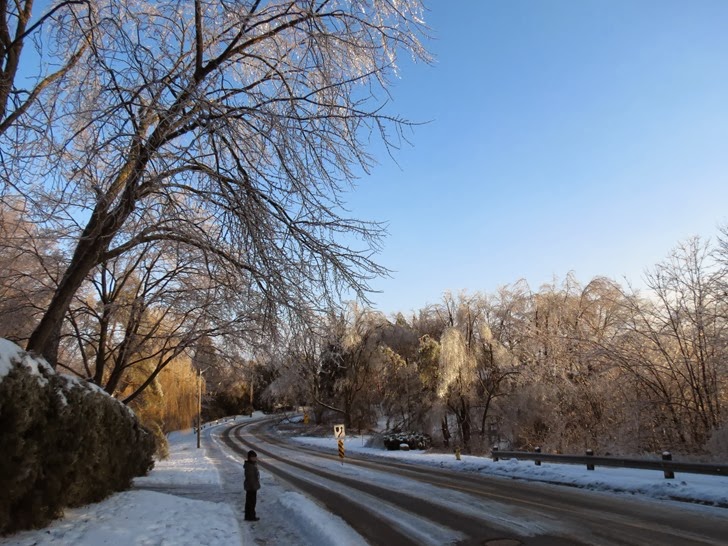 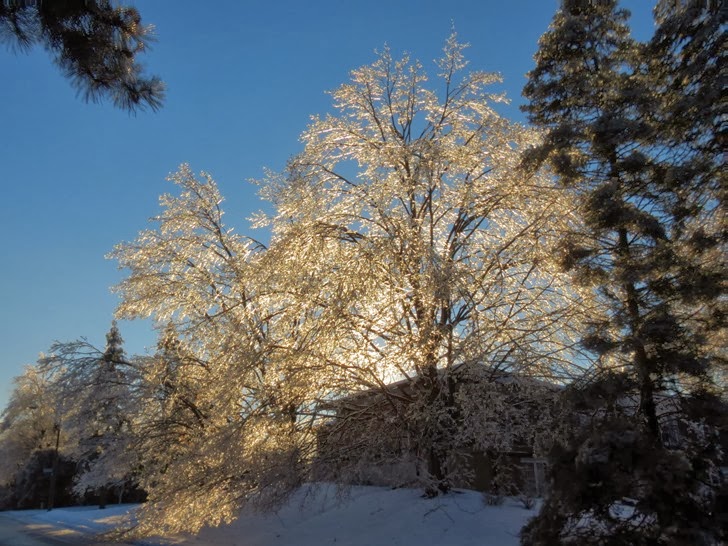 On Christmas eve Jennie’s family usually gathers at her niece’s large house for a huge pot luck dinner. The problem was that even after three full days they still didn’t have any power. They live in an older neighbourhood with lots of large old trees and above ground power lines.

We all decided to go ahead and have the event there anyway. It actually made the dinner much more memorable. Someone with power cooked the roasts and everyone cooked what they could at home, wrapped it up and brought it over.

They have a gas stove so some food could still be prepared there. 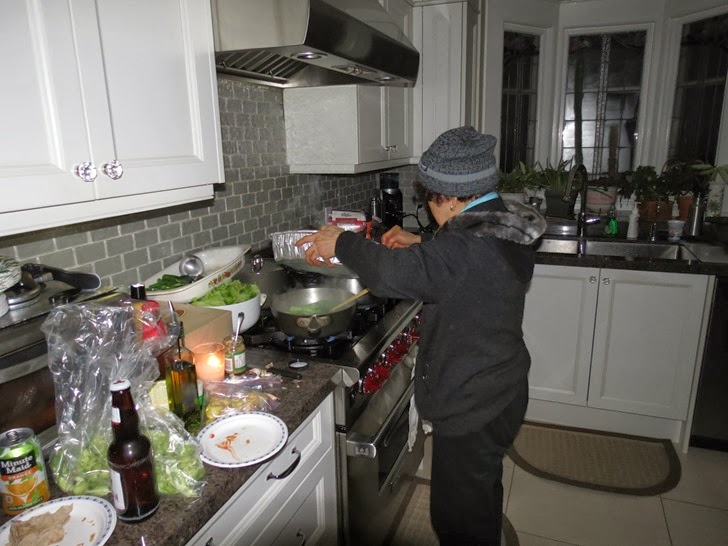 The fireplaces were going and I brought over my propane heater which helped to warm up the kitchen. Lots of flash lights kept the place bright. 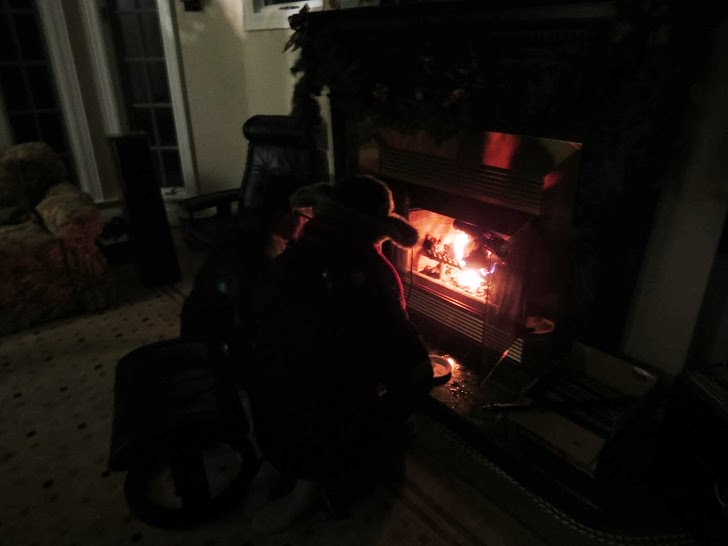 Everyone just kept their coats on and a fun time was had by all. 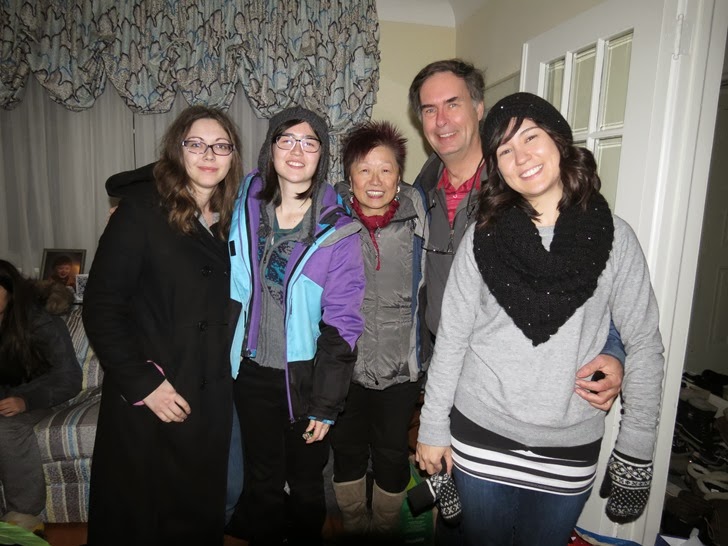 As usual there were huge amounts of food and we all stuffed our faces. 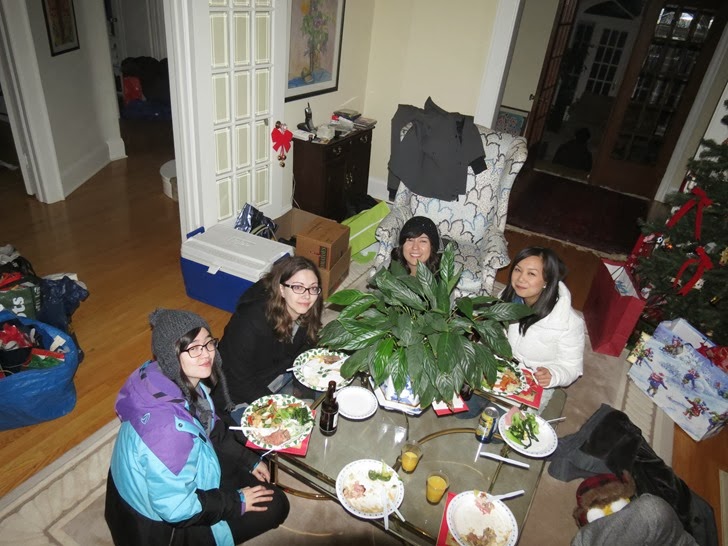 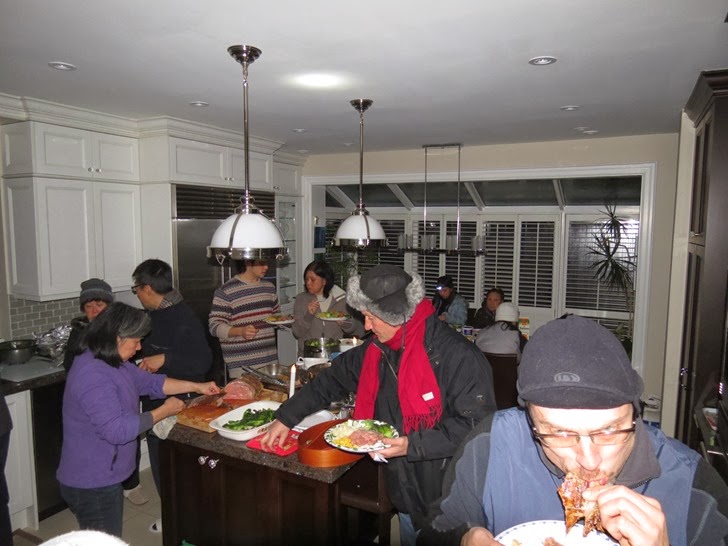 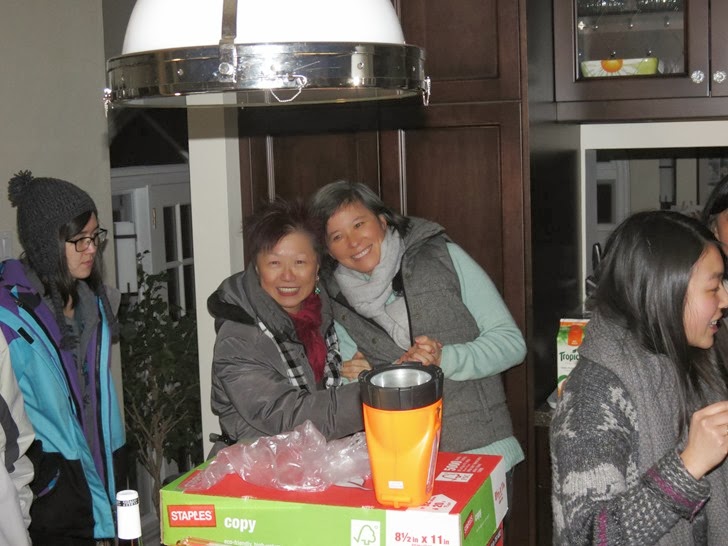 At about 10 pm even their power came back on, to a rousing cheer from everyone.

For what I hear, we got off really easy. Almost a week later there are still some people without power.

Jennie’s niece's brother inlaw had a branch fall on the line into their house. It took out the mast on the side of their house that held the line up. Hydro would not come to fix the line to the house until the mast was fixed because the mast is part of the house and is the home owner’s responsibility to repair. An electrician would not come and fix the mast until all the tree limbs were removed. The tree guys would not come until all the ice was melted and it was safe to go up the tree to prune it. So he waits for warmer weather. To keep fix pipes from freezing he ran an extension cord from his neighbour’s home to power his furnace.