The weather today did not look great. It was mainly cloudy with a few sunny patches and a high chance of rain in the afternoon.

I decided to drive the road up to 10,000 foot Oak Creek Pass. It is rated as an easy drive. I didn’t want to get caught on any of the tougher ones if it rained.

It was an OK drive with a few good scenic vistas but mostly it was a drive through the trees. 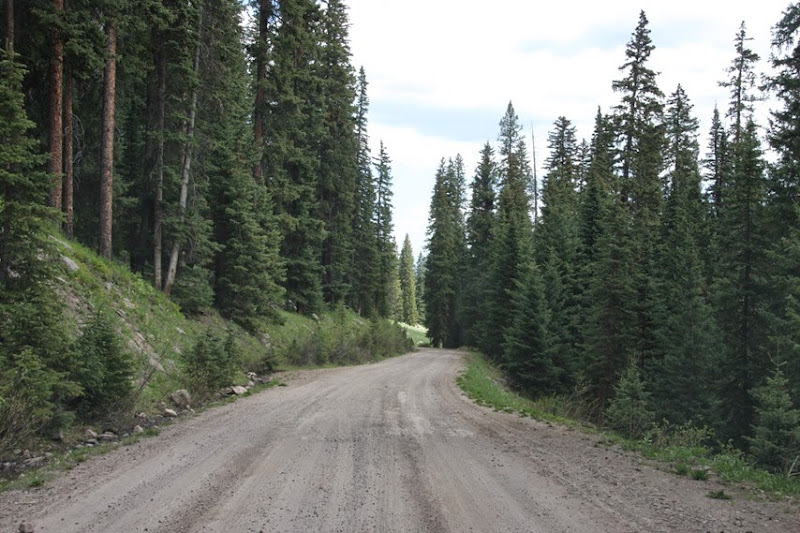 The dark skies also made of the long distance views that we got kind of drab. 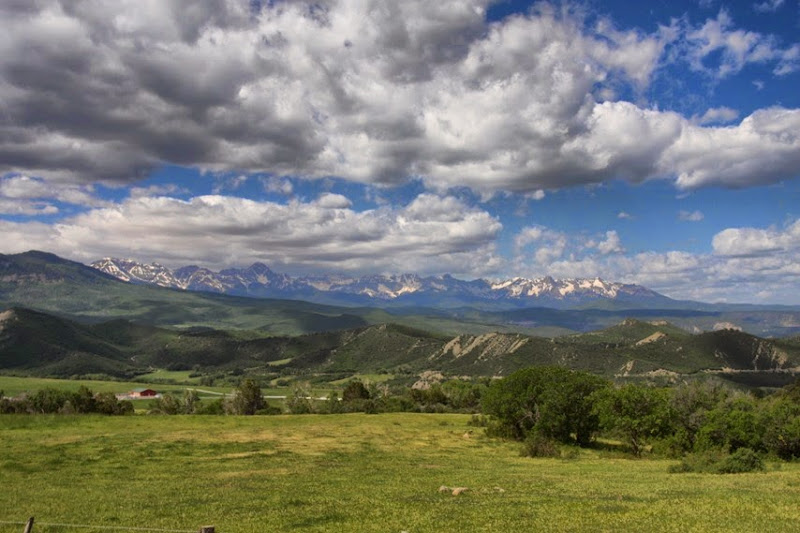 One interesting feature, up near the pass, was called Chimney Rock. 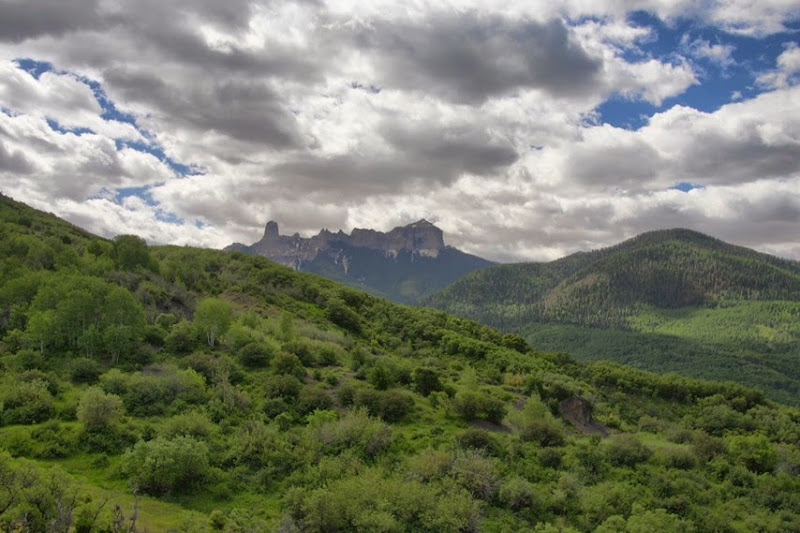 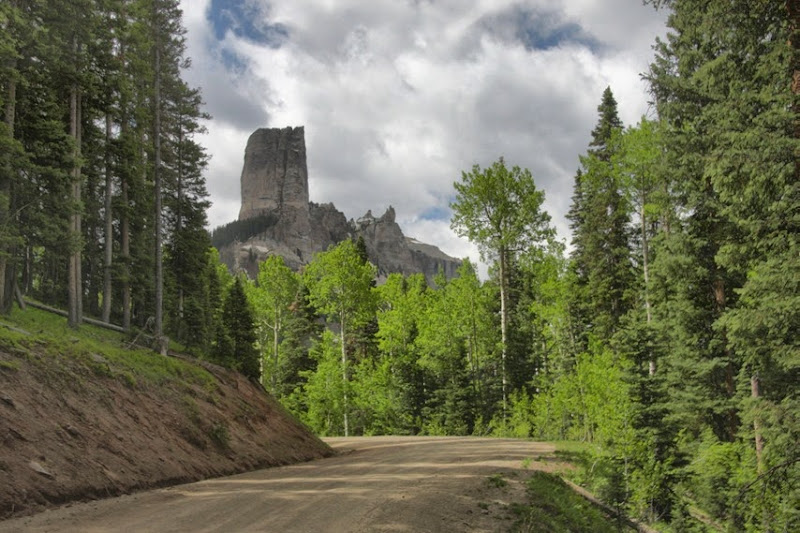 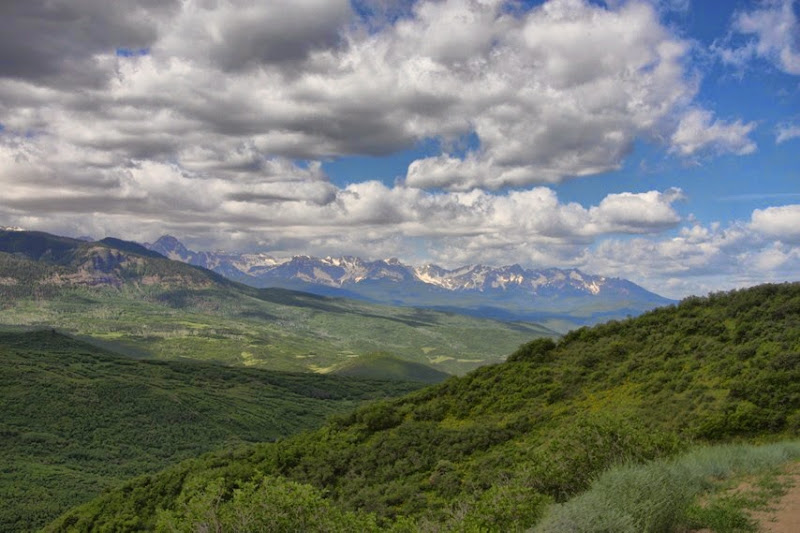 At the top of the pass there was no view at all. The man at the visitor’s center said that we should drive take a short side road that ran across the top of the ridge that did have some good views.

While the main road was in great shape, this one was very narrow and muddy. 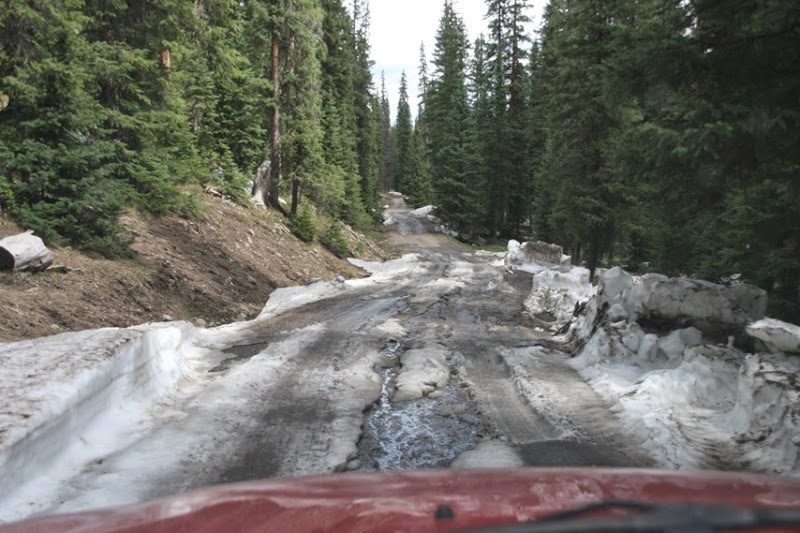 It did give us a closer look at Chimney Rock. 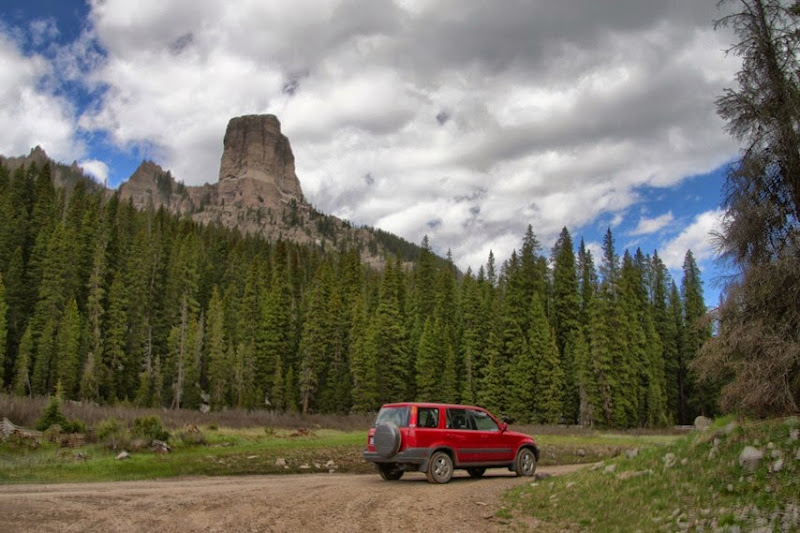 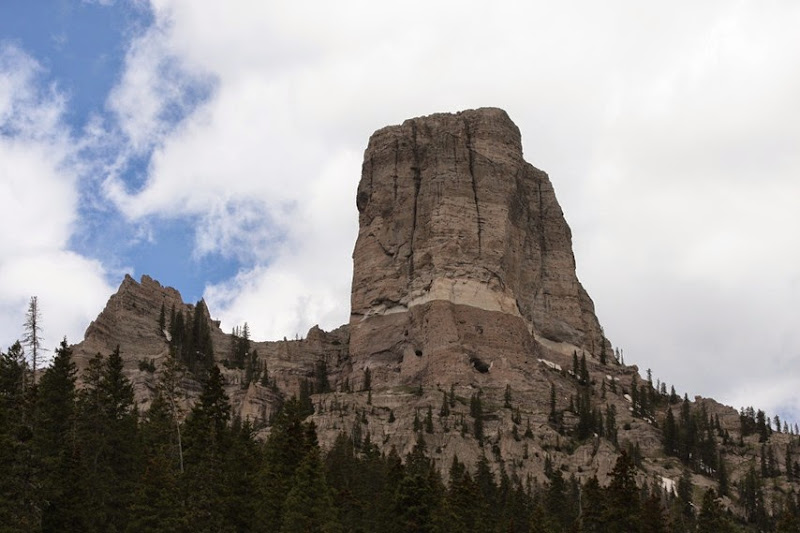 The side road was supposed to be 2.5 miles long. After about a mile we ran into this. 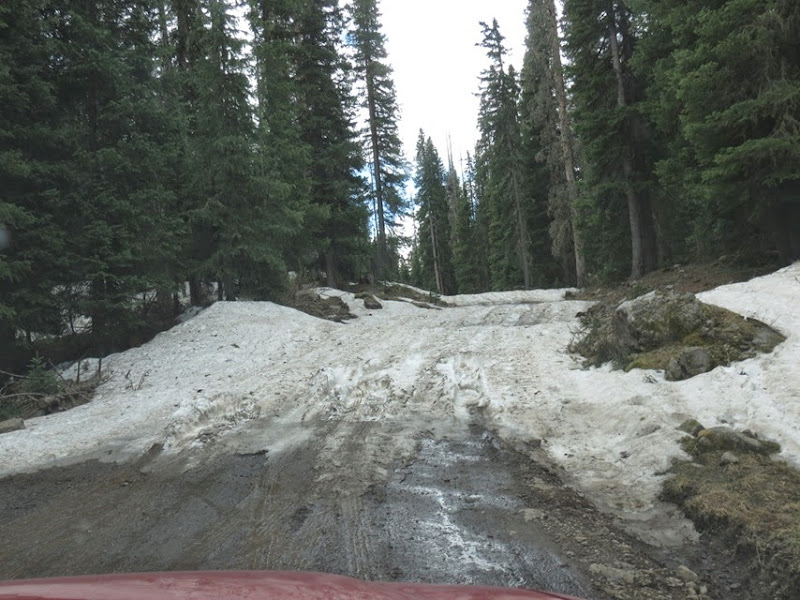 It was a small hill with about 1 foot of snow on it. I walked up and it was kind of soft. Not wanting to give up I gingerly put the front wheels of the CRV in and they just started to spin. Oh well, backup and turn around. It’s too bad because I walked to the top of the hill and it was dry afterwards.

We headed north as we went down the pass. 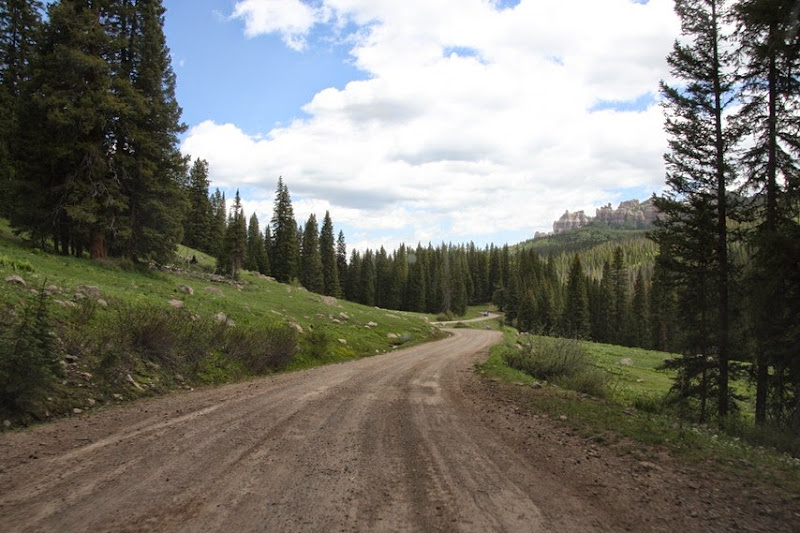 This open area was just covered with these plants. We have no idea what they are. 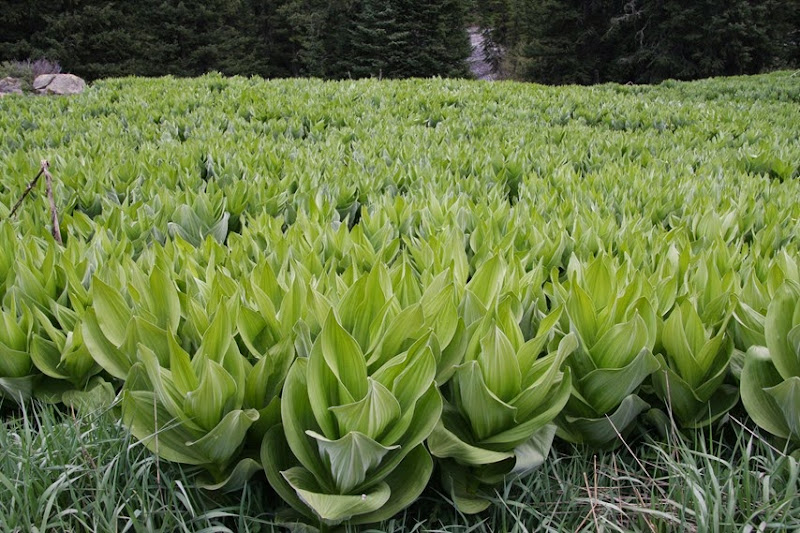 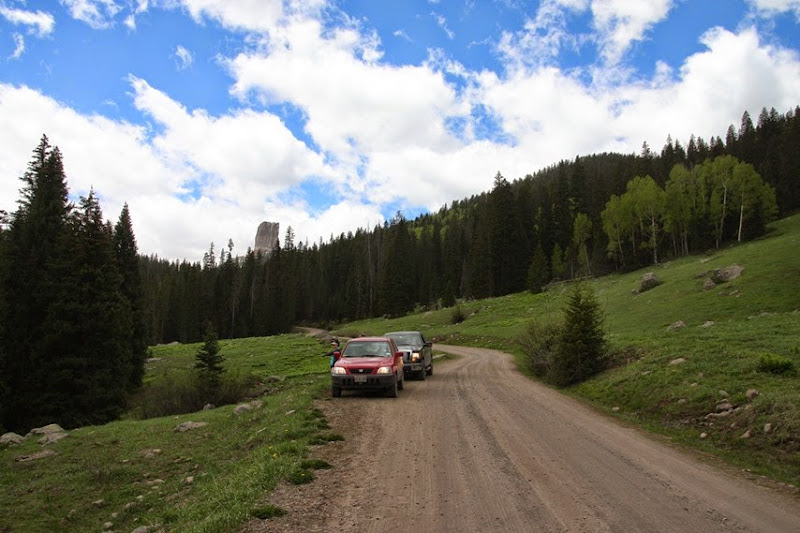 A  nice camping spot. The yellow flowers are all dandelions. 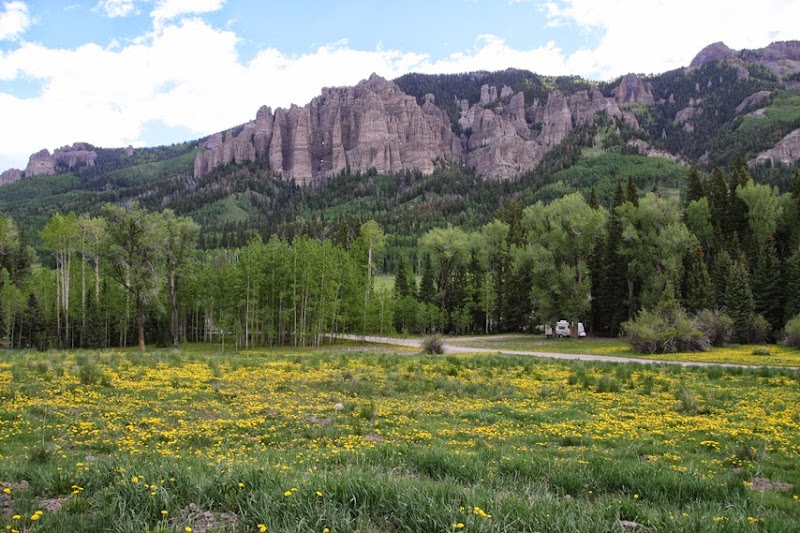 Finally a bit of sun on the mountains. 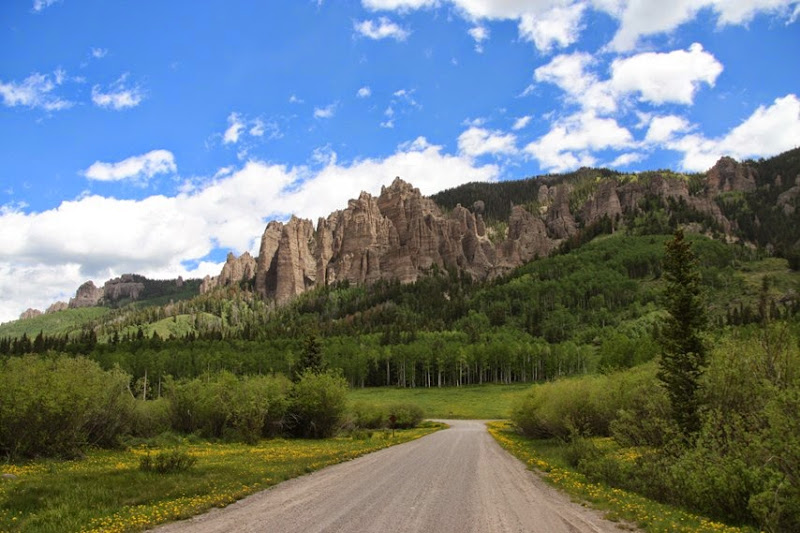 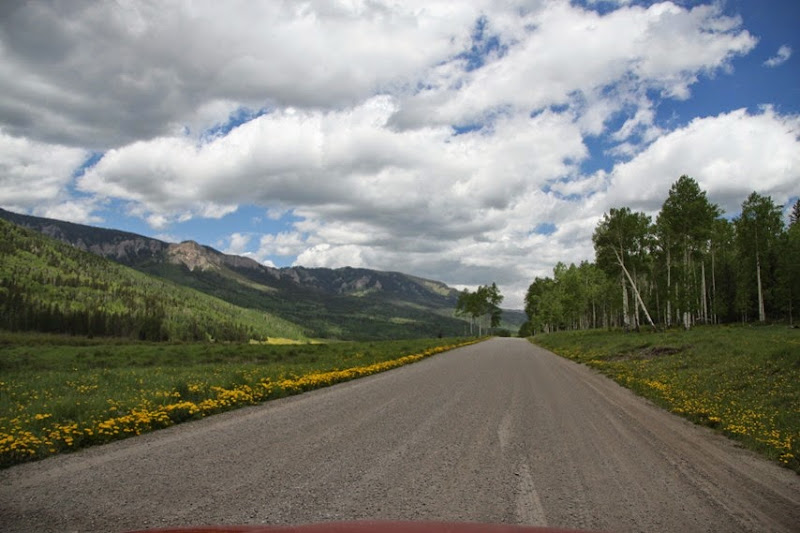 We stopped at the end of Silver Jack Reservoir for a quick look.

We had lunch at a campground in the National Forest. 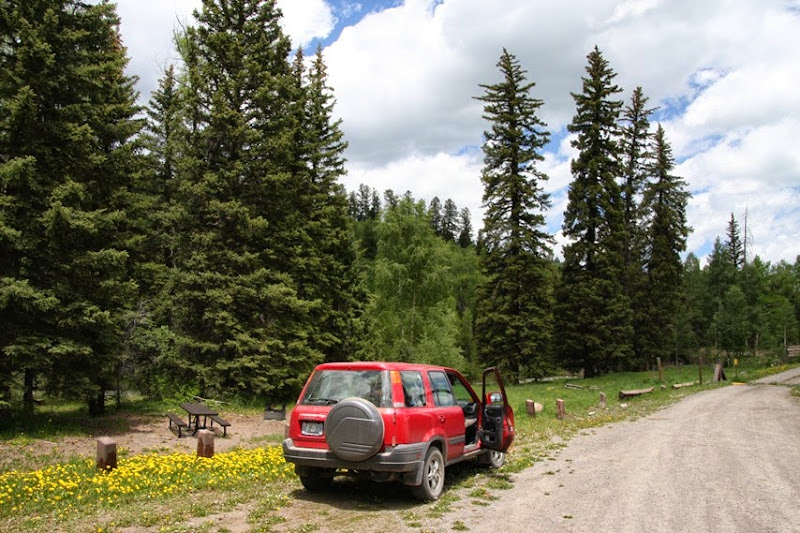 The farther down we went, the more open it became. 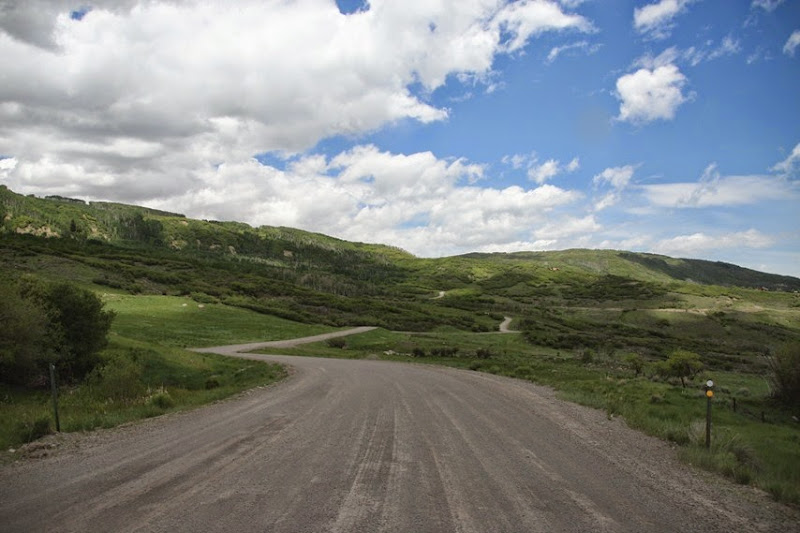 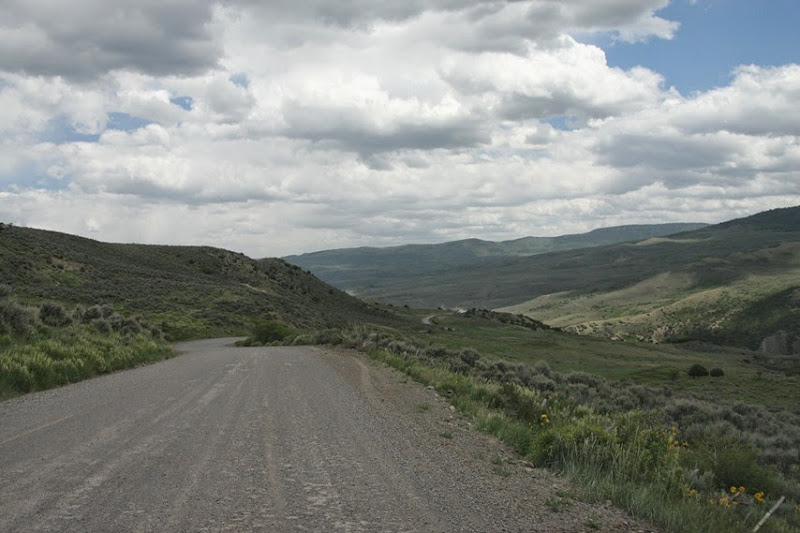 Once we were out on highway 50 we headed back to the west. 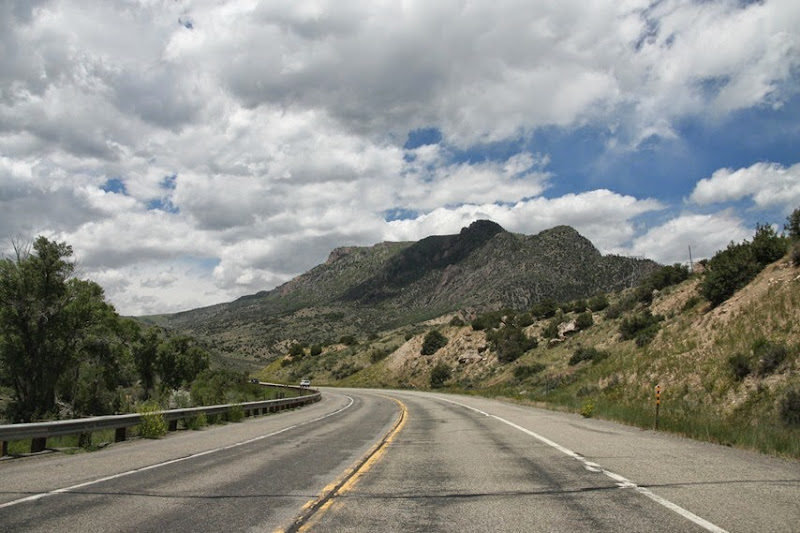 We will eventually be heading east in this highway in the RV. We climbed one pass that goes 1000 feet in elevation in one very steep relatively short climb. As we were doing it I said that I was glad that we would be coming down this in the RV. Then we got to the top for an equally steep downhill on the other side.

Near the town of Cimarron I noticed a sign that said if you took a short side road that you could see Morrow Point Dam. Why not?

It was less than a mile in and you went through a very narrow canyon. I never did get a good picture of it. 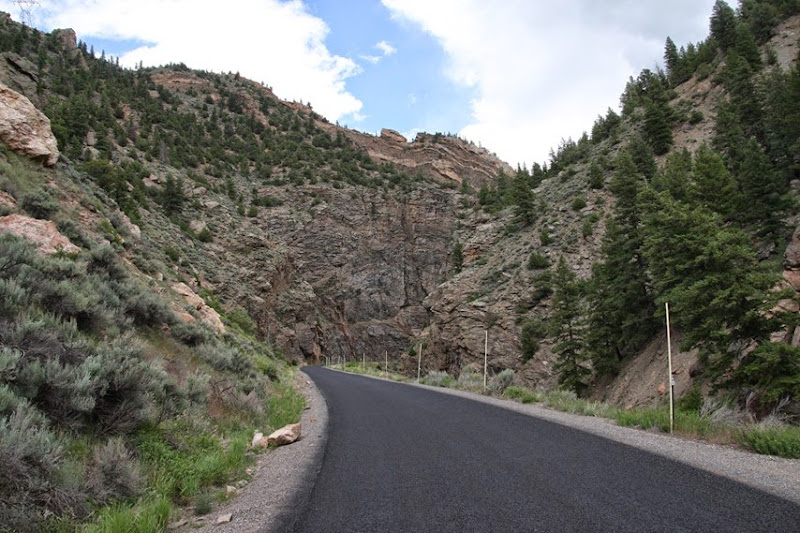 The road split. We could only go to the bottom. Too bad because it looked like the view from the top would be interesting. 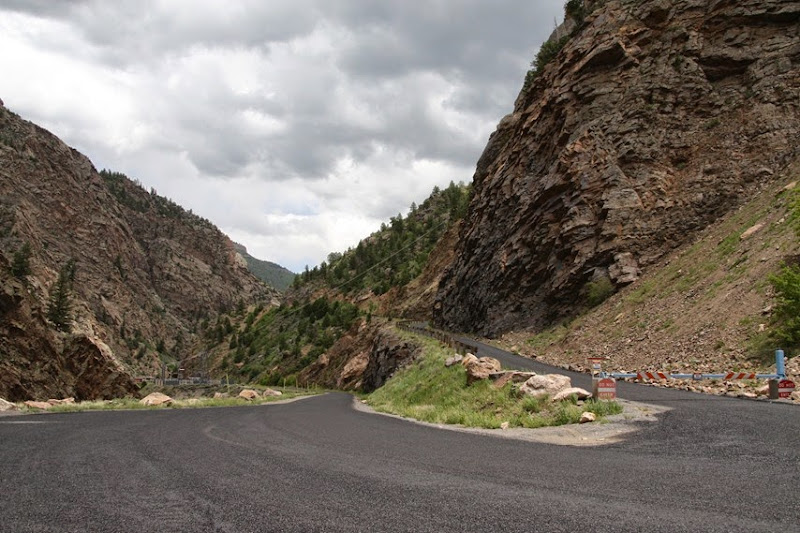 Looking away from the dam. 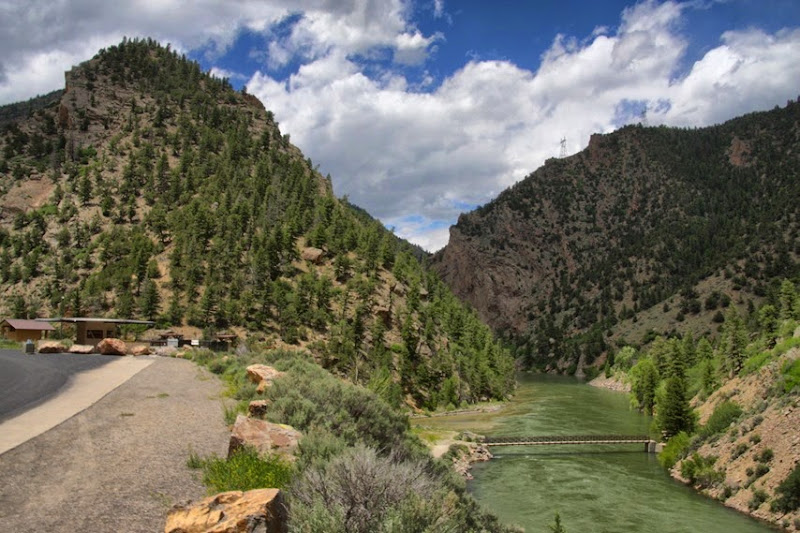 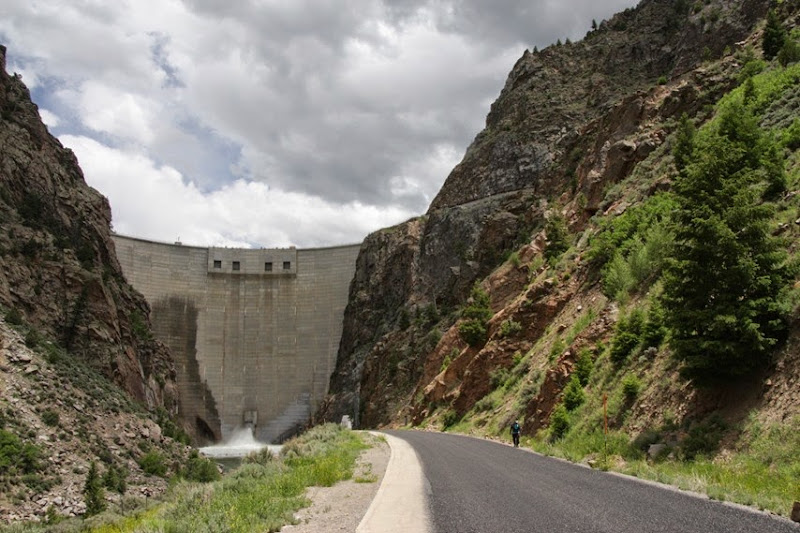 This is as close as we could get. 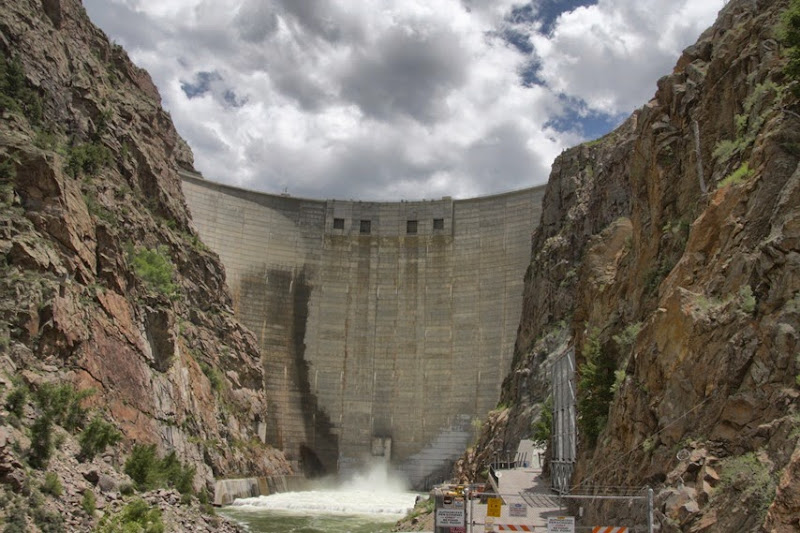 I am not sure what was the purpose of that massive gate that was swung back against the wall. 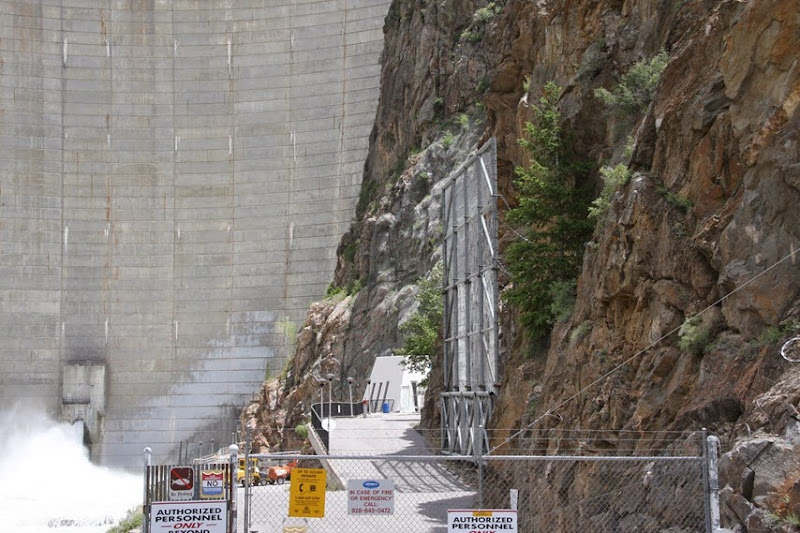 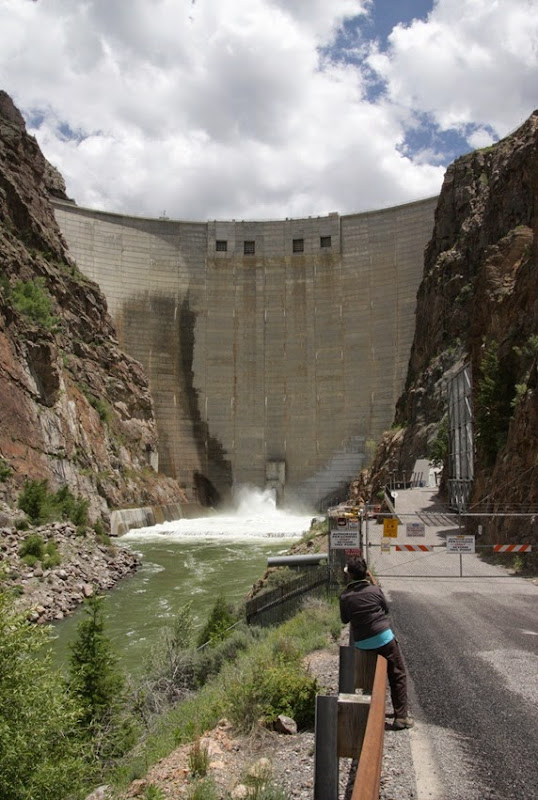 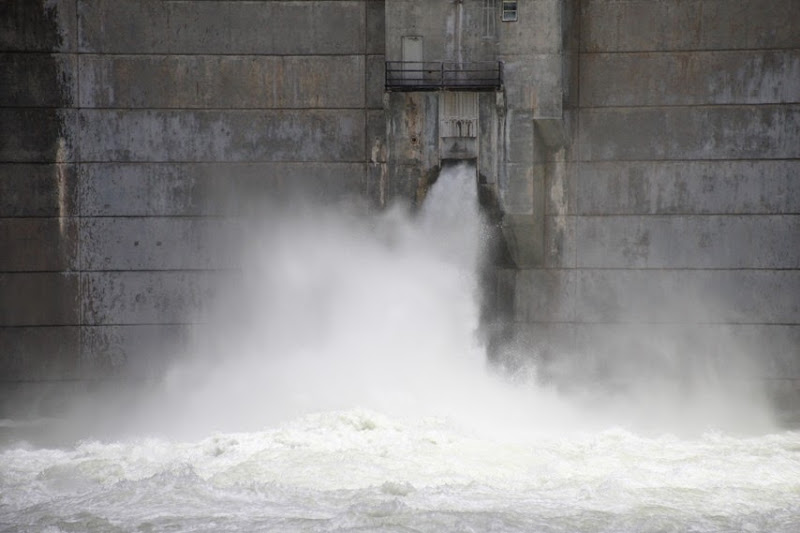 We headed west to Montrose and did some shopping. While we were there it we got a few sprinkles of rain. As we headed south, back to the campground, the sky looked ominous. 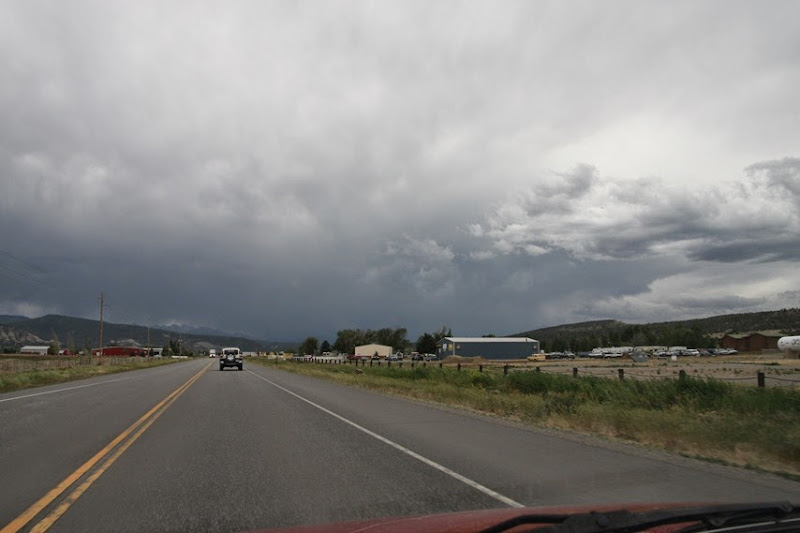 I think Ouray was getting all the rain. The campground was dry when we got there and the sun soon came out.