Today is Monday. On Saturday there were thunderstorms on and off all day so we stayed in. One bolt of lightning hit very close to us and the resulting thunderclap made us both jump out of our chairs. There was less than a second between the light and sound so it was close.

Yesterday it rained in the morning and was a bit cool with temps in the low teens. We had hoped that the rain might take away some of the smoke and haziness but it almost seemed worse. It was such a gloomy day we just couldn’t work up any enthusiasm to go out. Instead I worked on somethings on the RV that had been bugging me for a while.

It was a long drive.and adding to the time was the fact that we had to take a ferry across Arrow Lake just south of Revelstoke. The ferry runs every hour on the hour. We couldn’t have timed it much worse. As we were getting near I could see that we were cutting it close and tried to hurry bit as we pulled up we could see the ferry just leaving the dock. The hour wait went by fairly quickly and it meant that we were first on the next one.

Another smoky and hazy day Strangely we never got the smoky smell..

The ferry just appeared out of the fog. The lake is not that wide so we would normally be able to see right across. 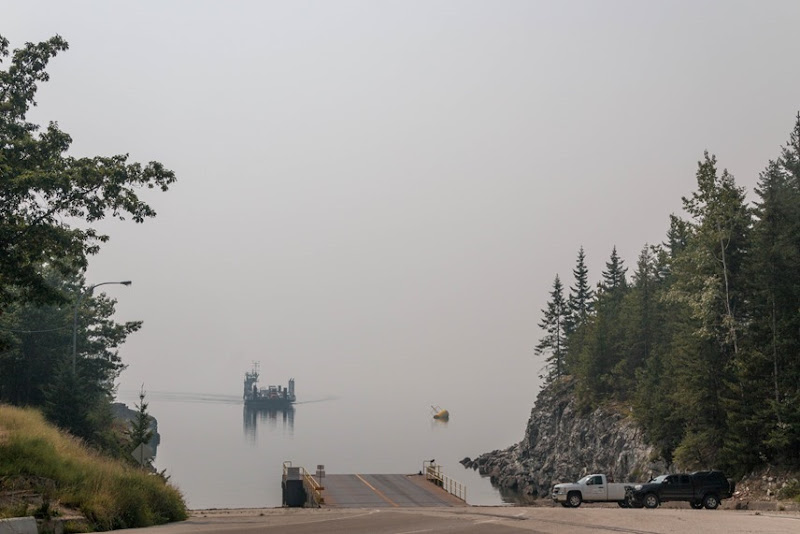 The ferry doesn’t look that big but they pack a lot of cars on it and it is free. 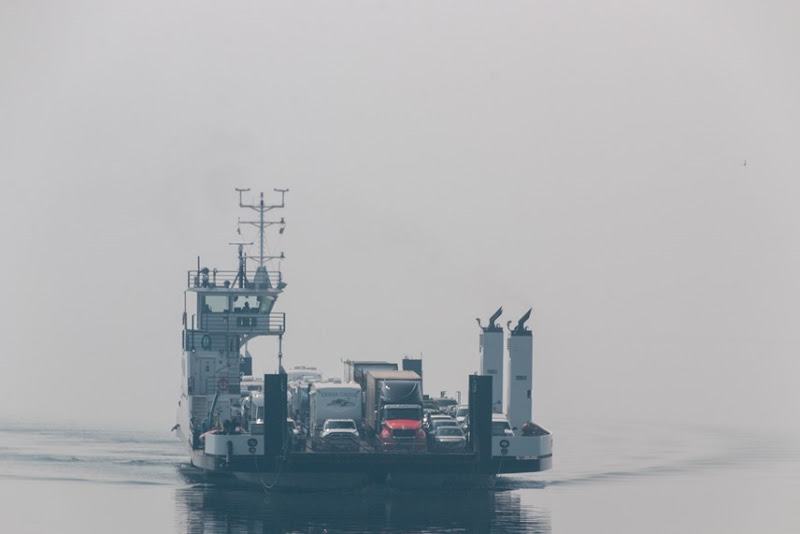 We were parked right up against the front gate but this was our view. 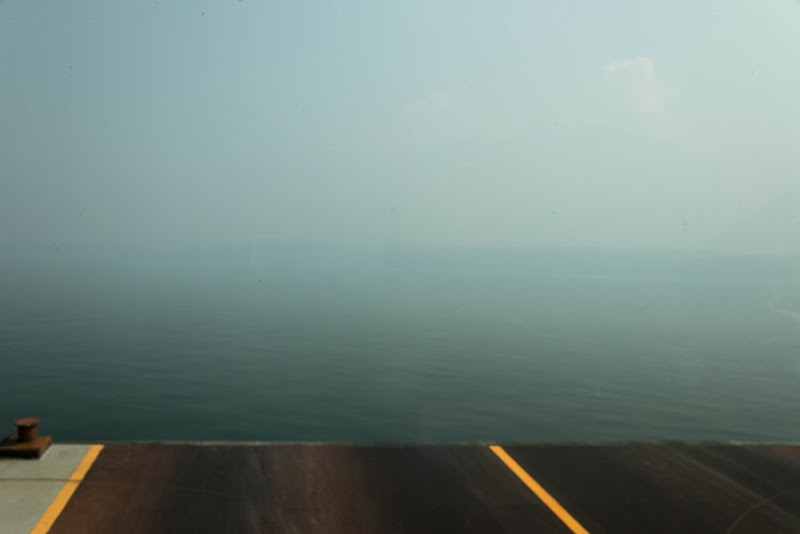 I stuck my head out the window to watch the shore recede into the smoke.

As we got closer to the other side we could see the low dark shape of the shore and just barely see the outline of the mountains above it. 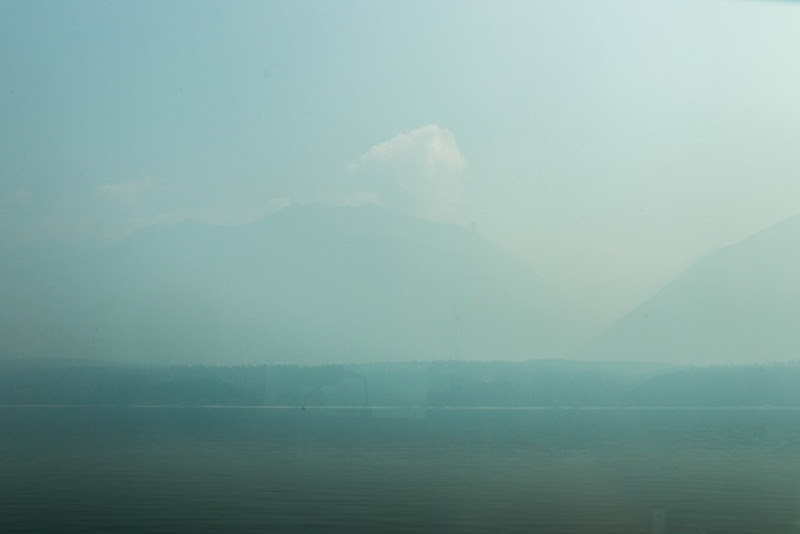 A logging truck and us were the big boys on the trip. We were also the first ones off the ferry. We also both pulled off to the shoulder to let everyone else by before we headed on our way.

We had caught the noon ferry so we soon found another pullout for lunch. It might have a nice view but …

The entire trip was very twisty and turny. There were no big hills but it was a tiring drive because of all the concentration it took.

I am sure the drive down beside Slocan Lake must be very scenic. 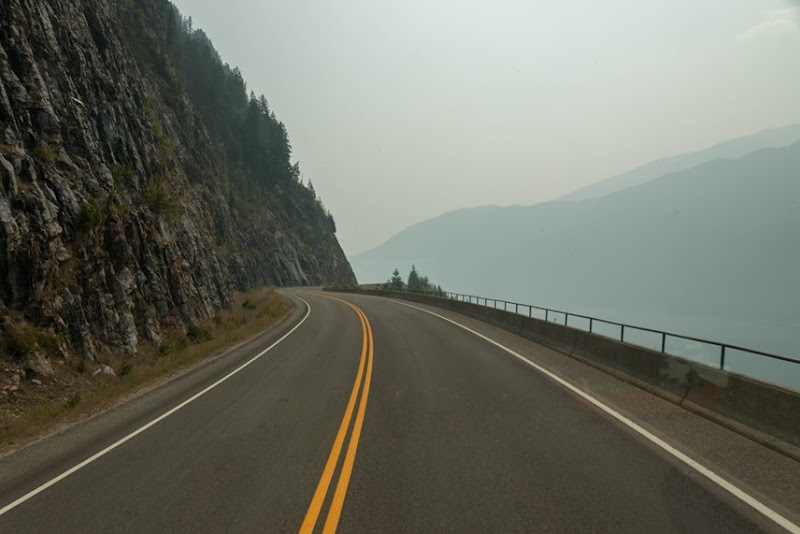 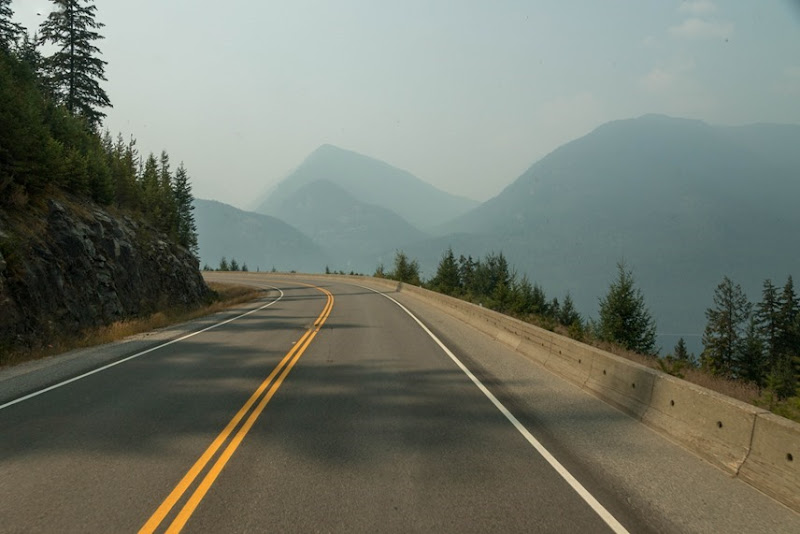 Up until we got to Nelson there was hardly any traffic and if anybody did get behind me there were lots of spots that I could let them by.

From Nelson to the park was all 60 kph, busy and just turn after turn along the lakeshore. I was too busy for any pictures and was very glad to get to the campground.

We are at this provincial park because all of the private campgrounds around Nelson didn’t get very good reviews. As with all the provincial parks it was very hard to get a site here All I could manage to snag was a no hookup one.

You can only book your stay up to 4 months before the first day that you want but this means that people that come earlier and overlap the days I want can book the site before I even get a chance. When I went online 4 months ago at the exact minute today opened up, there were only 2 sites in the 175 in the park that would fit us and were available. One had power but someone beat me to it. At least I managed to get this one. 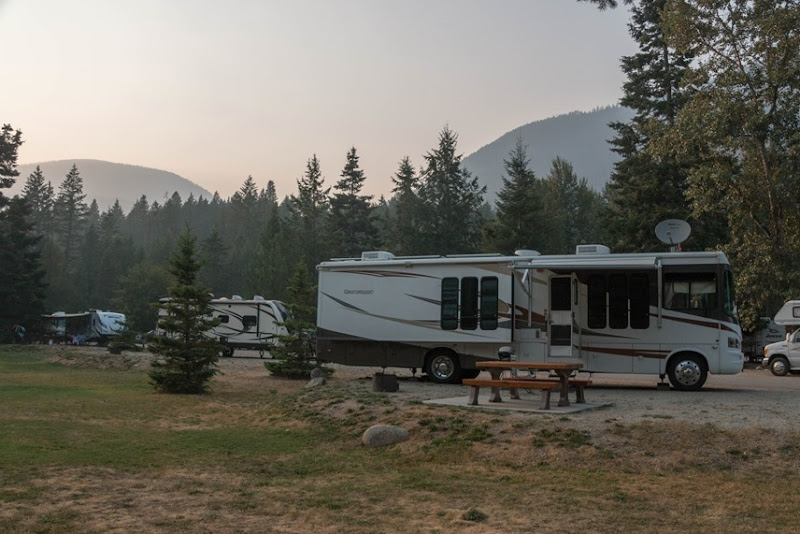 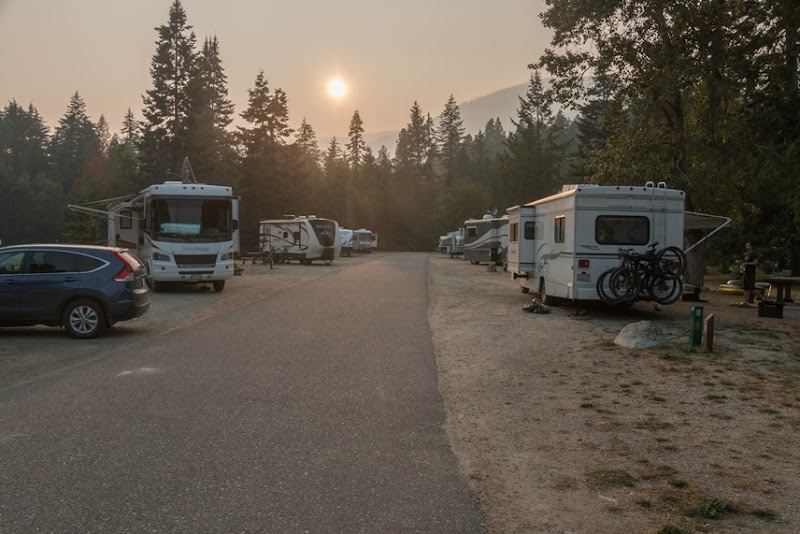 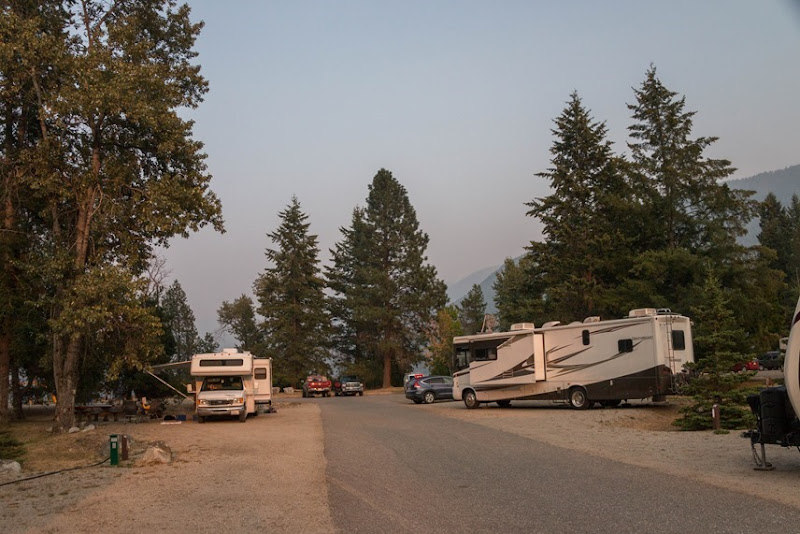 So with no hookups we will try and last a week on 60 gallons of water and our own waste tanks. We can go to the dump station if we have to.

We’ll see how me manage. It’s a tough life!