Another mostly overcast day so it was time to hit the forest to go to a waterfall.

The trailhead to Ammonite falls is only about 10 minutes north of us. On the way there, we saw this lifted house. Are they moving it or adding a lower level? 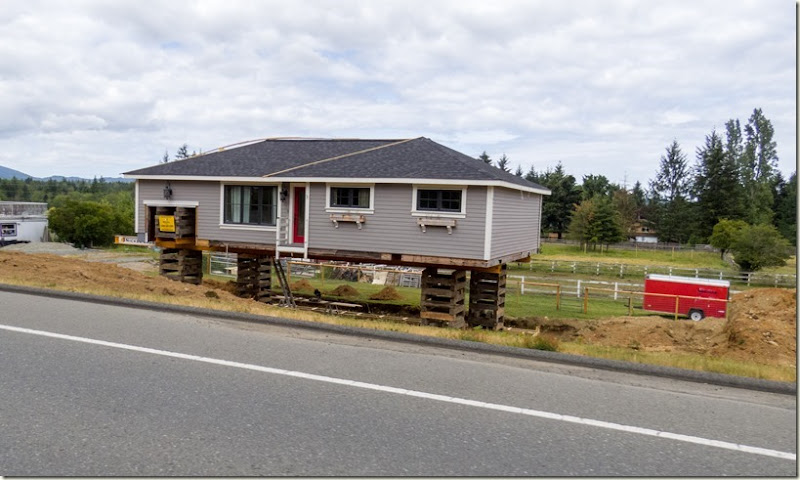 The falls are advertised on the tourism Nanaimo website as one of the local waterfalls to see. The trail is a bit over 3 km each way.

There was no real description of the trail or even how to get there. The only detailed description I could find was in a 7 year old blog post. It turned out to be a bit out of date as I guess the parks and rec people have done some work.

First, the old post said to park in this laneway as long as you don’t block the gate. 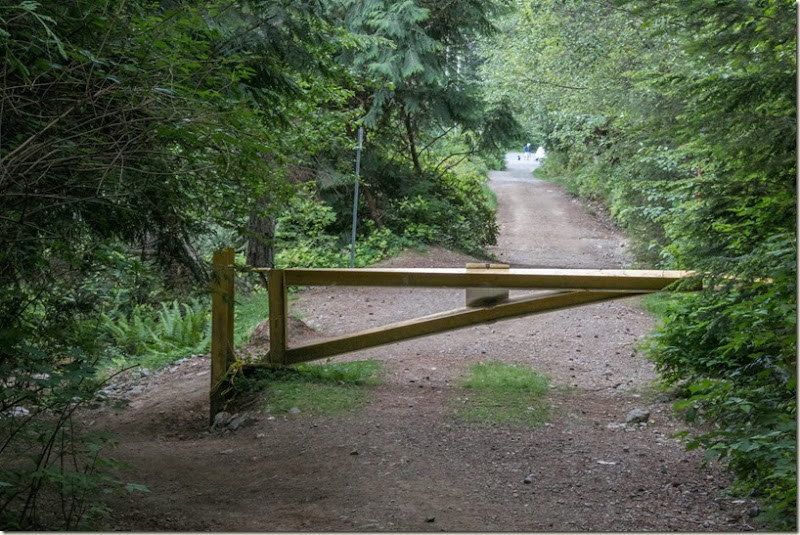 Well that is no longer true. Someone is building a large home here and doesn’t want the lane blocked with cars. There is now an official parking lot just down the road. Amazingly, if you notice the car at the end of the lane, they hired a private security company to post a guard there all day to stop people from parking here. We can still use it as a trail though.

Second, the blog post said you would be following old logging roads with numerous branches and that it was easy to get lost. This area has been and is being logged. Now there is a well marked path through the forest that avoids most of the roads and clear cuts making it very easy to find the falls. A sign at every intersection. 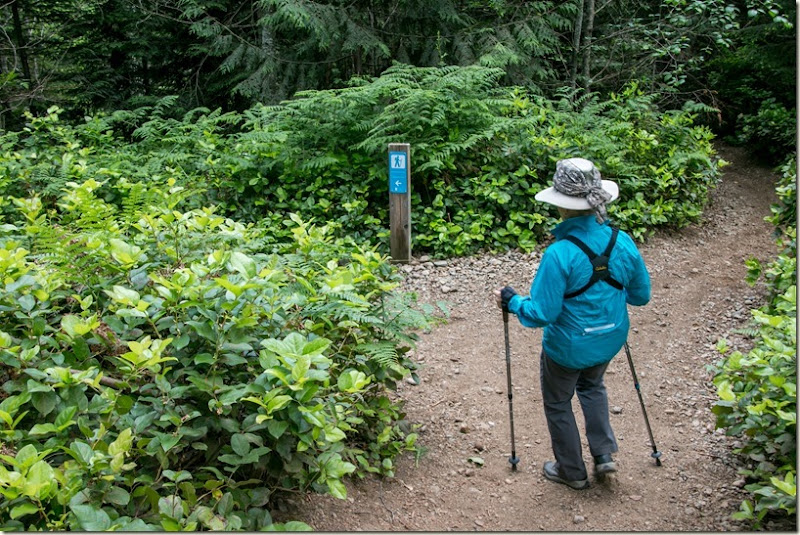 You could tell that the area had been logged because all the trees were the same kind and height. 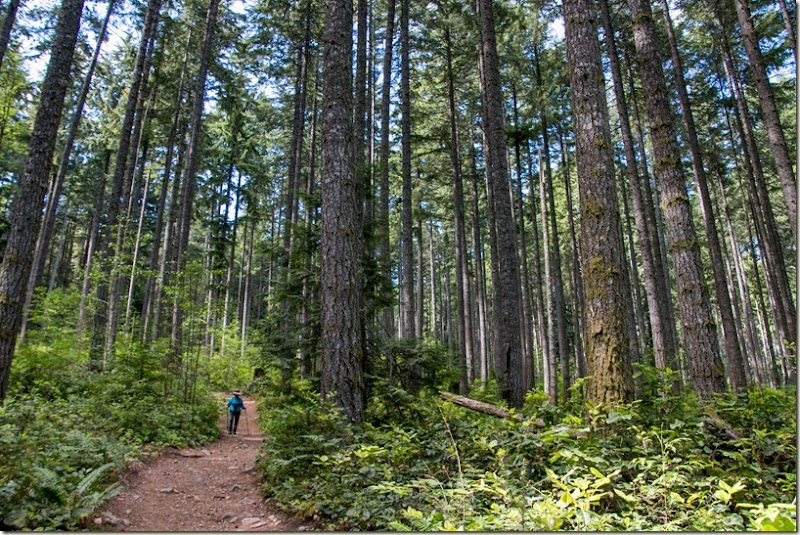 There was not much to look at on the trail except that the salmonberry bushes were starting to ripen. 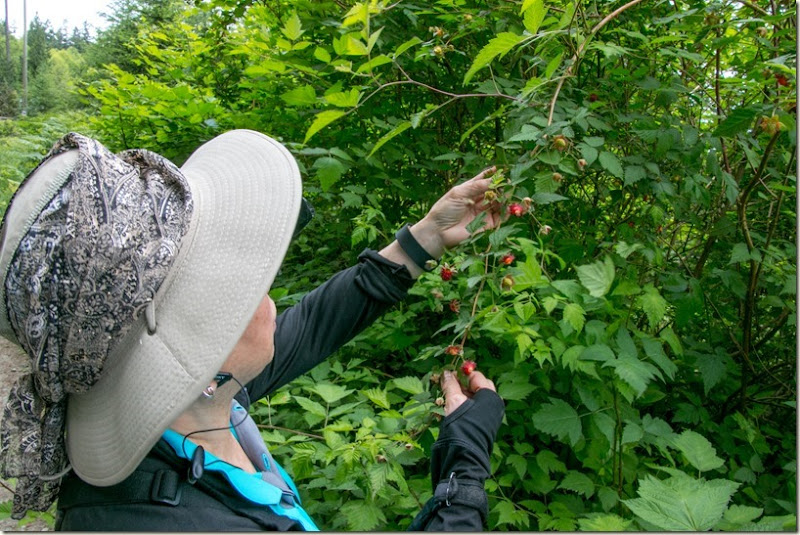 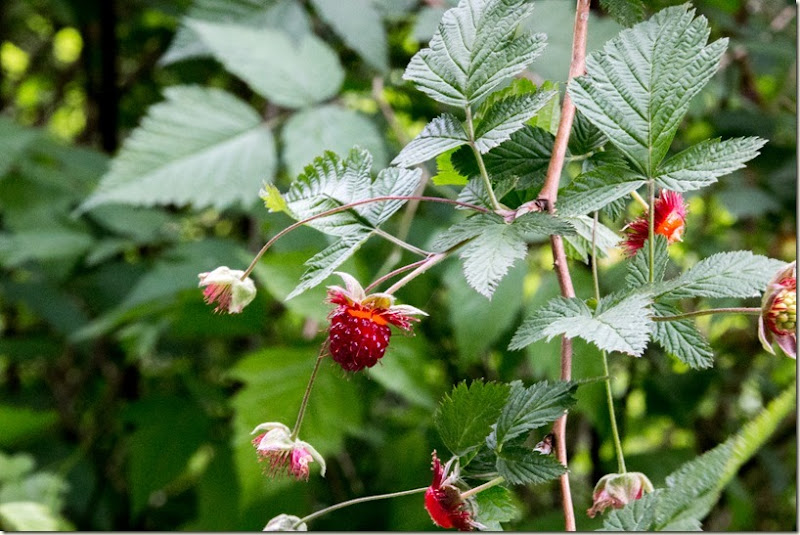 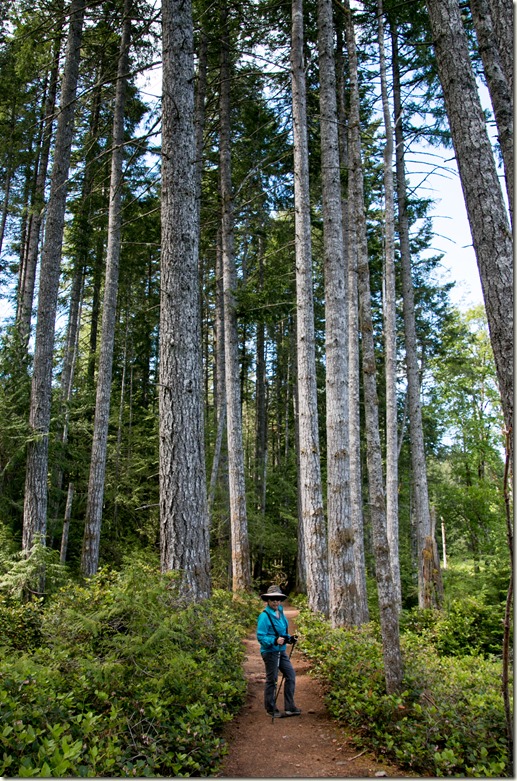 We skirted one clearcut. The trail had a few steep ups and downs but nothing too terrible. 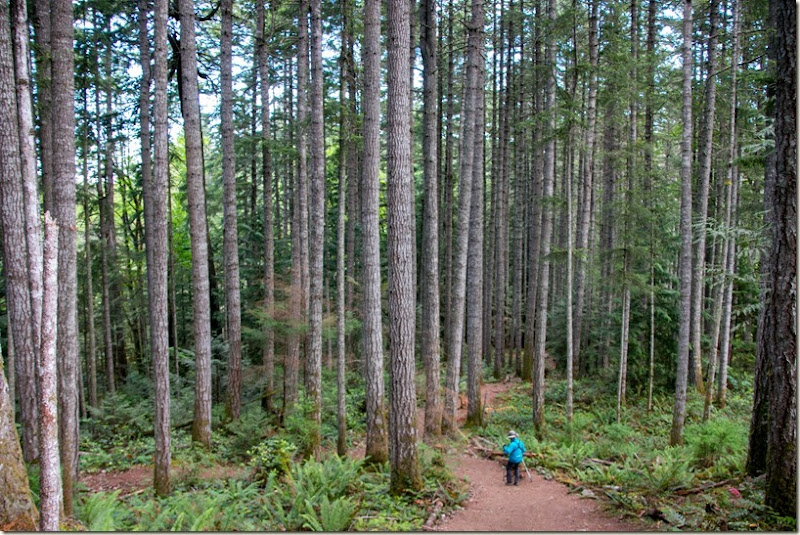 From the official viewpoint you couldn’t even see the waterfall . 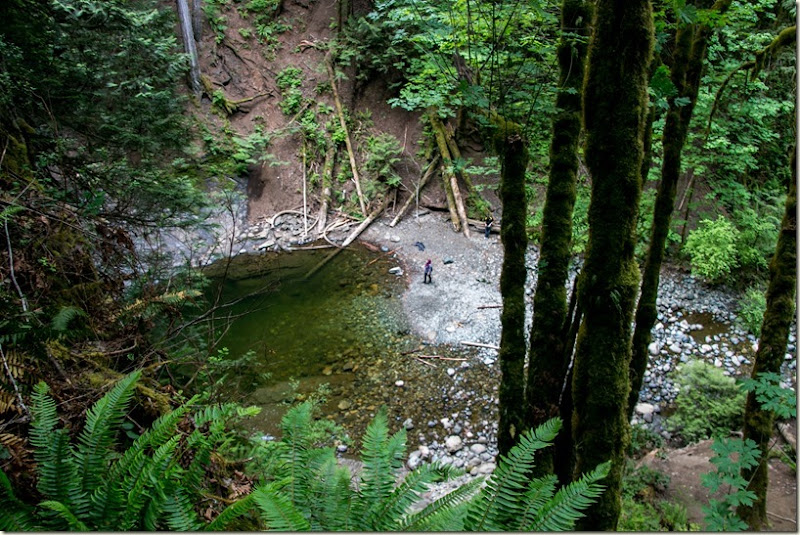 Even though the way down is marked as closed, one of the main claims to fame of this path is that you have to use a rope to climb straight down the embankment to get to the bottom. 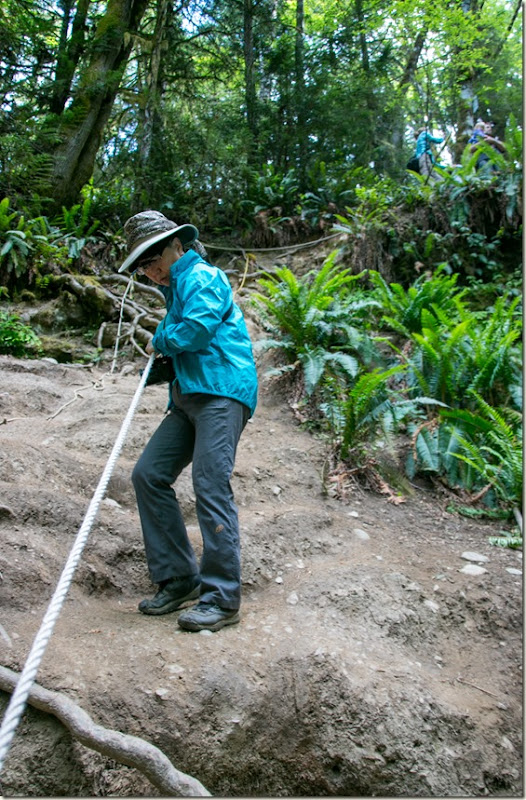 A better view from part way down. 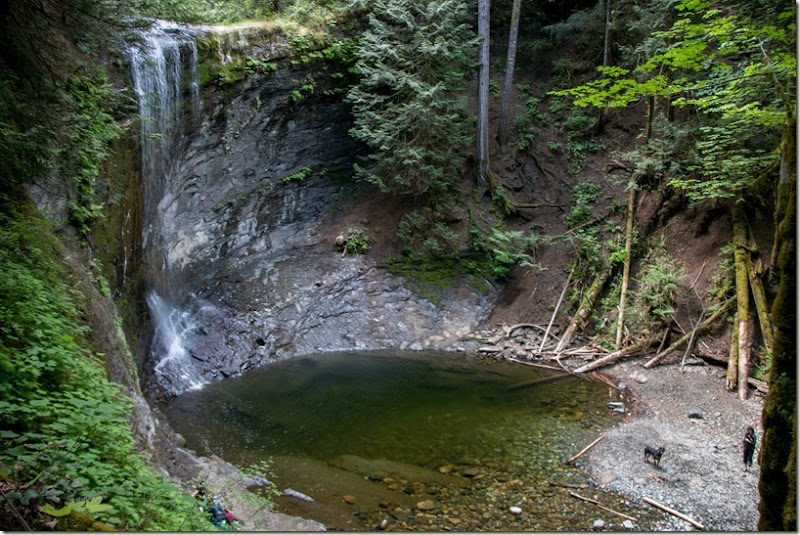 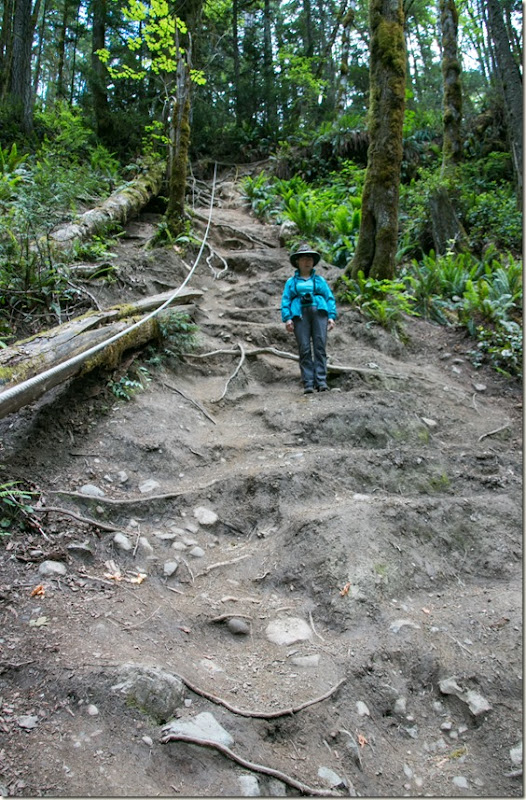 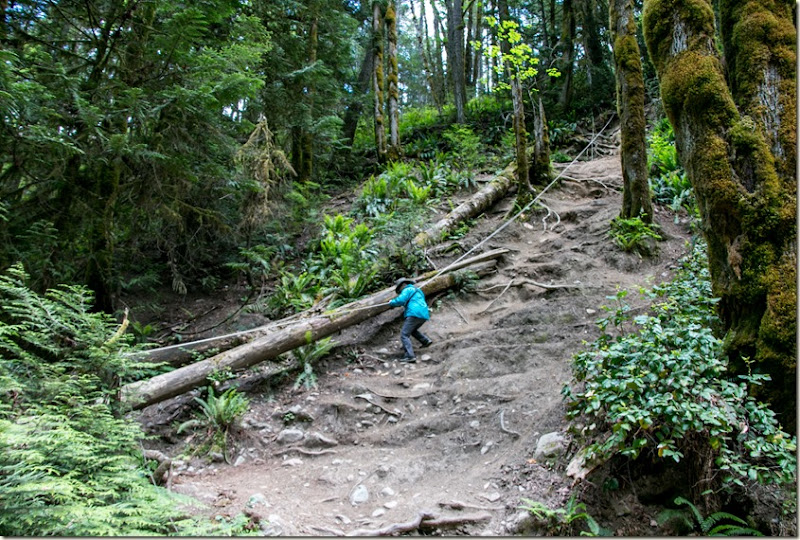 A much better view from down here. 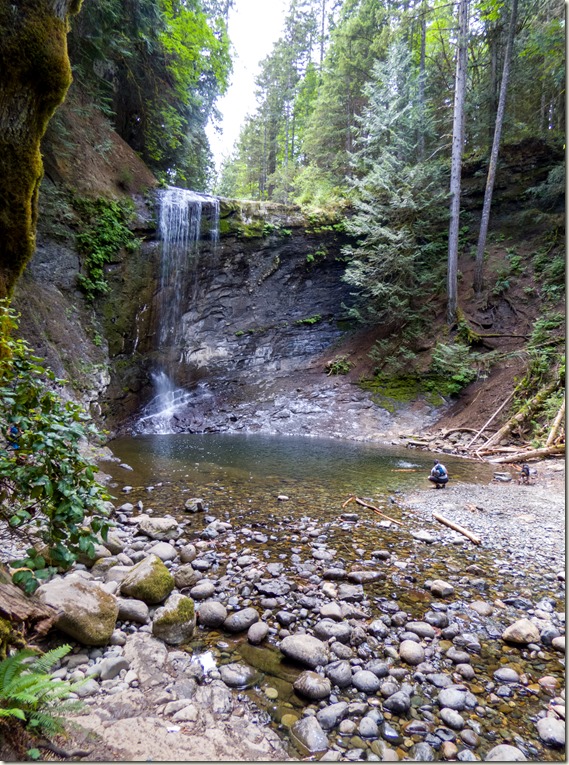 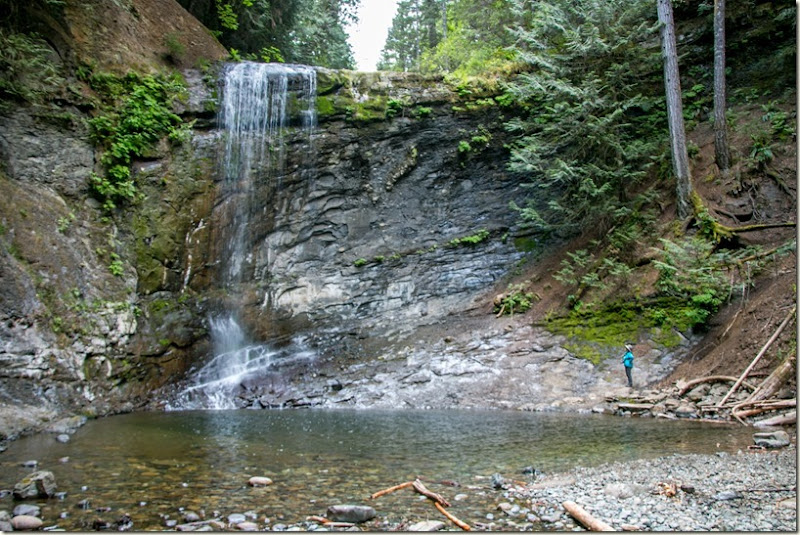 Jennie looking back towards me. 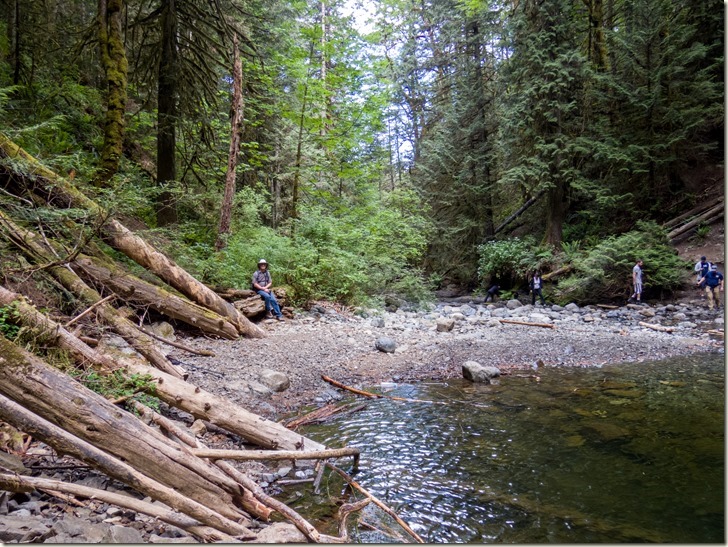 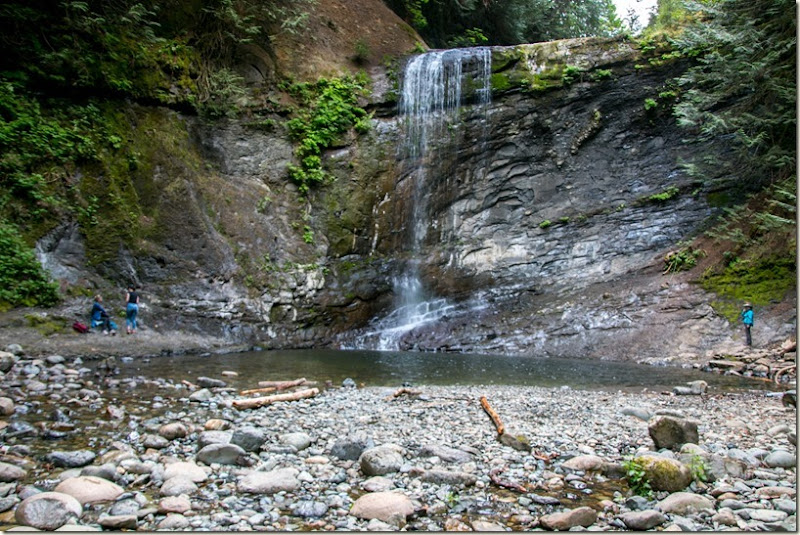 And you had to know that at least one of these was coming.

In a rare burst of sunshine we had lunch sitting on this log. 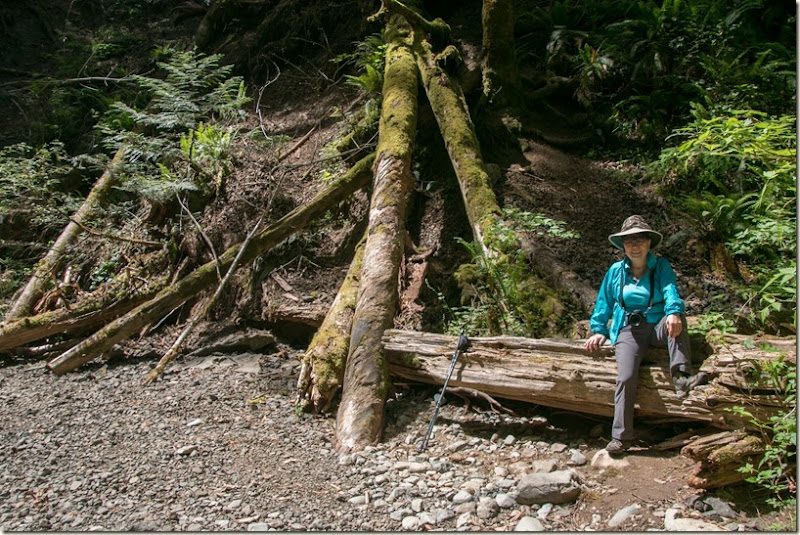 The rope got a bit crowded. 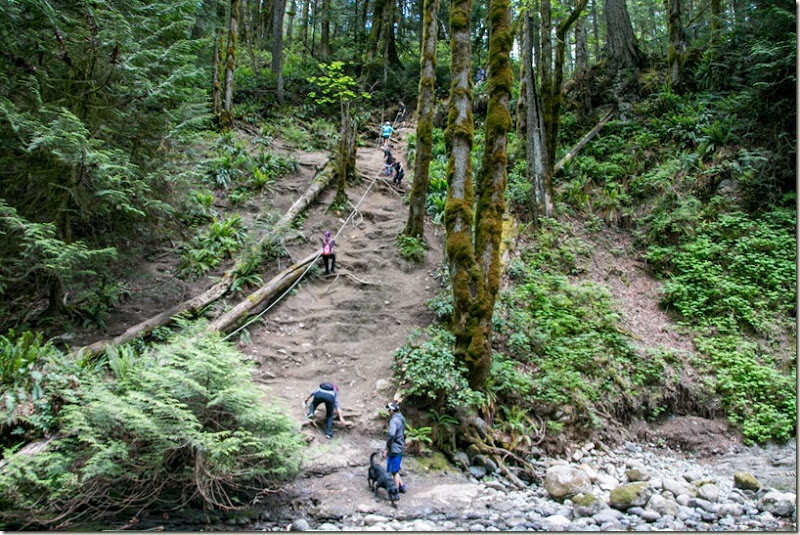 We were surprised that this somewhat elderly middle eastern lady came down. She was ready with thick gloves through. 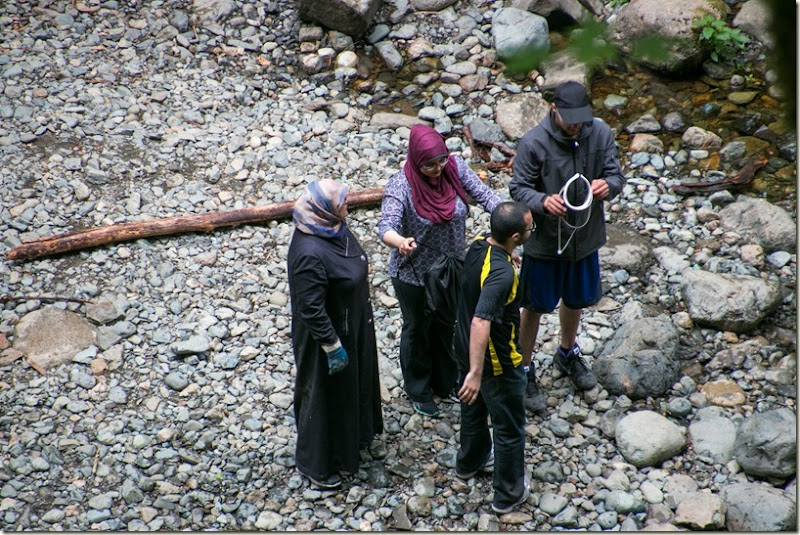 I went off exploring downstream for a short way. 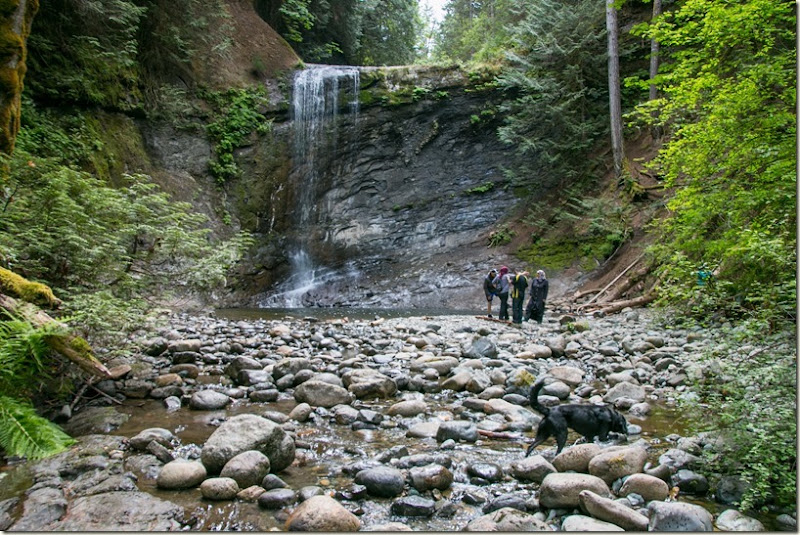 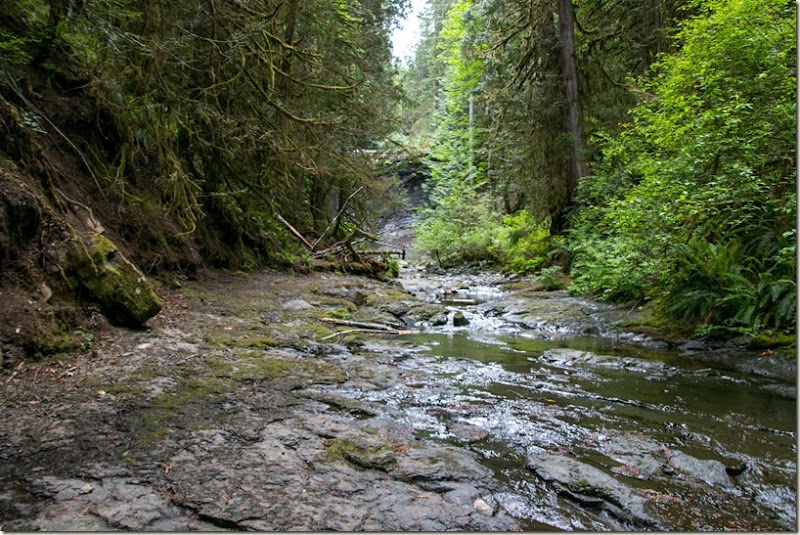 There was a small cascade but there was no way to get around to take a good picture of it. I’ll include this just to remind me. 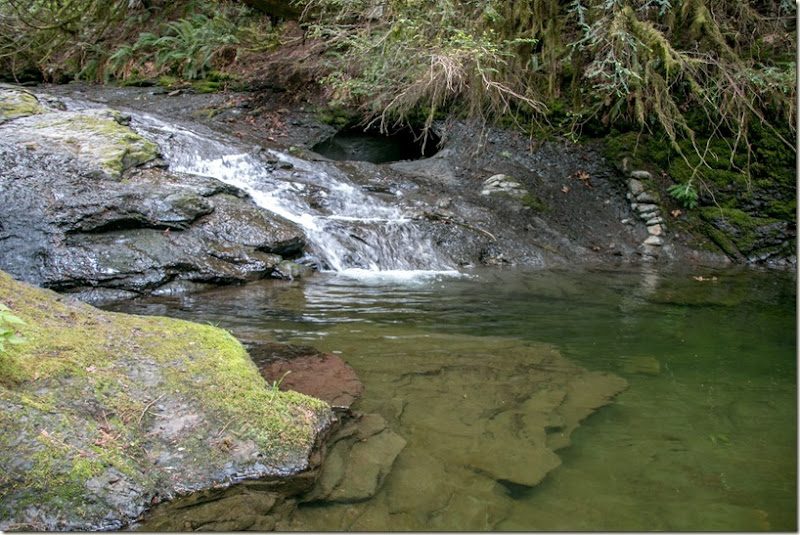 Back at the falls we sat for a while to enjoy the view and then started back up the hill. 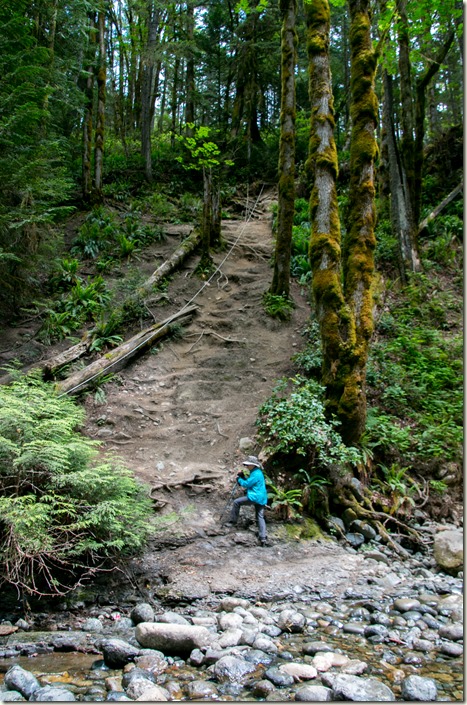 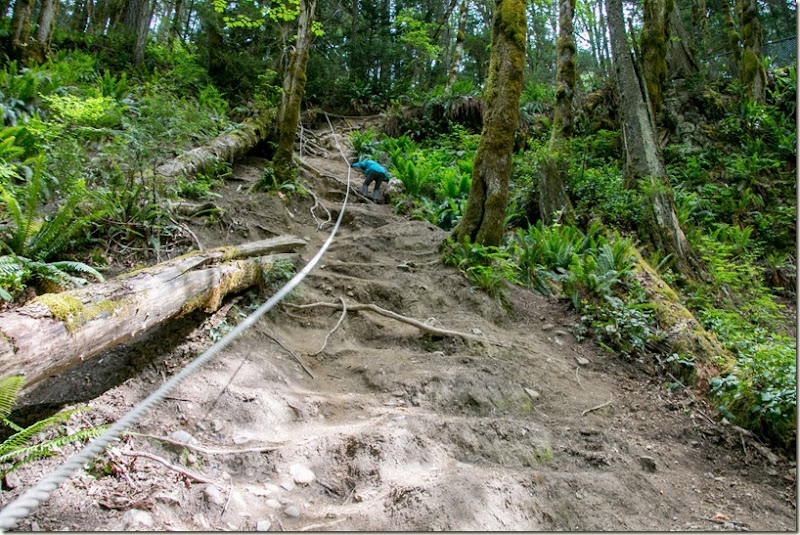 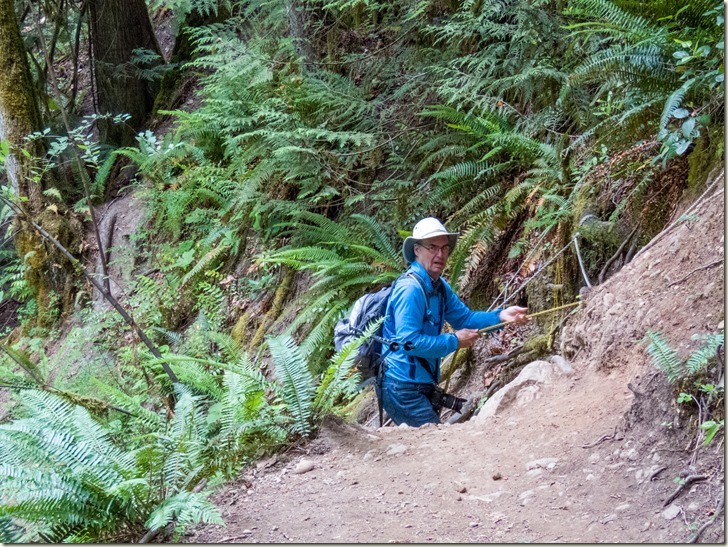 One last look down. 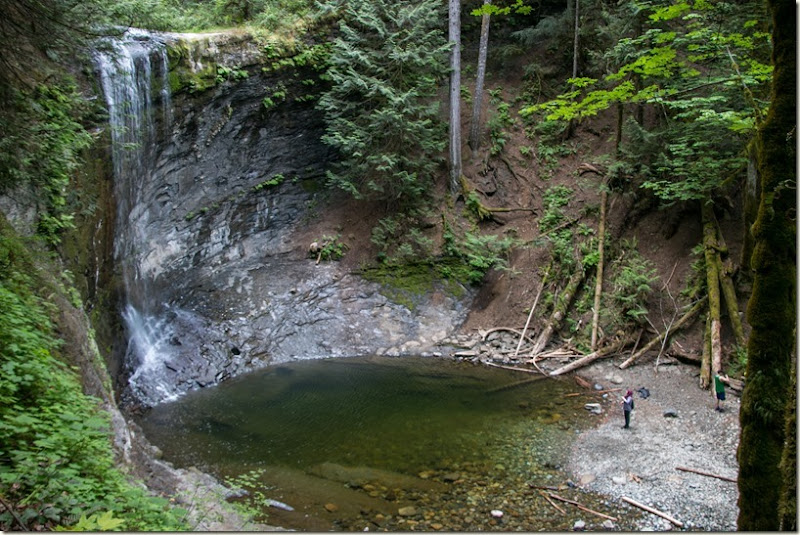 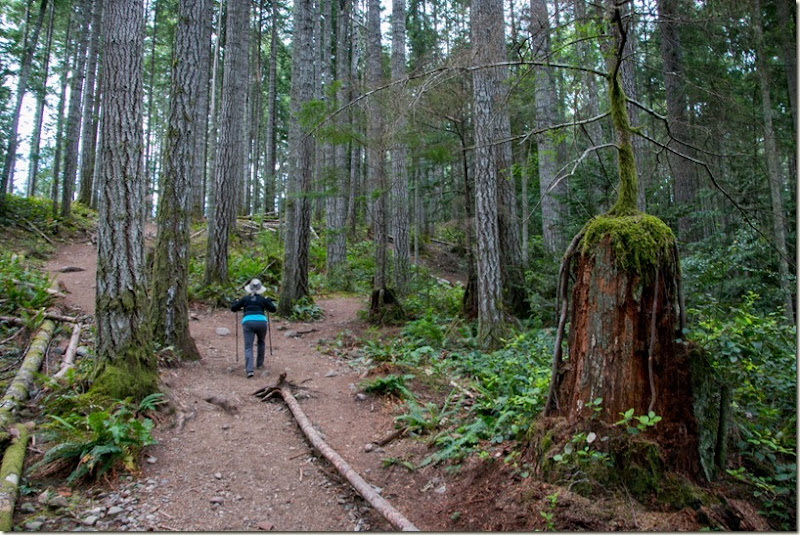 It wasn’t too busy while we were there but now that it was after lunch there were a lot of people heading in. 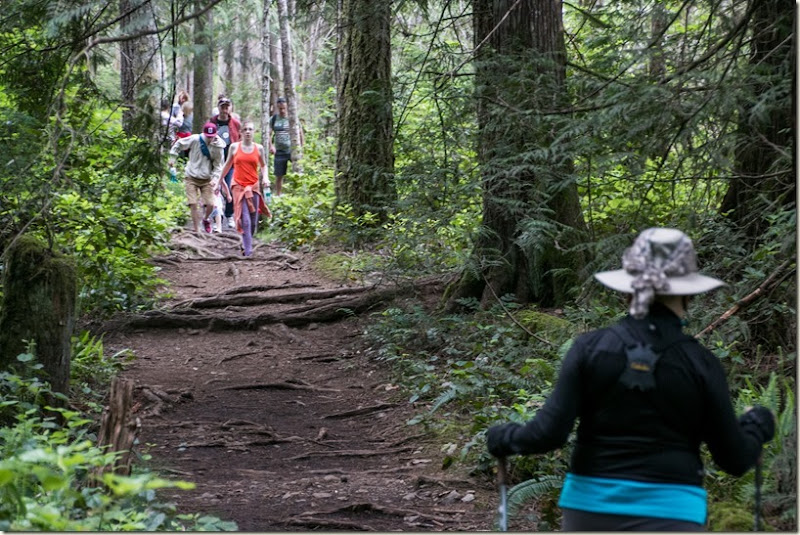 And then home. A great way to spend the midday. We were home around 2 pm and lazed away the rest of the afternoon.