It didn’t freeze last night but the temperature was about 5C in the RV when we arose to another beautiful sunny day. It got up to about 15C when we got to Amarillo.

While I filled up with the daily ration of gas, Jennie went across the road to check out the store. Cherokee country. 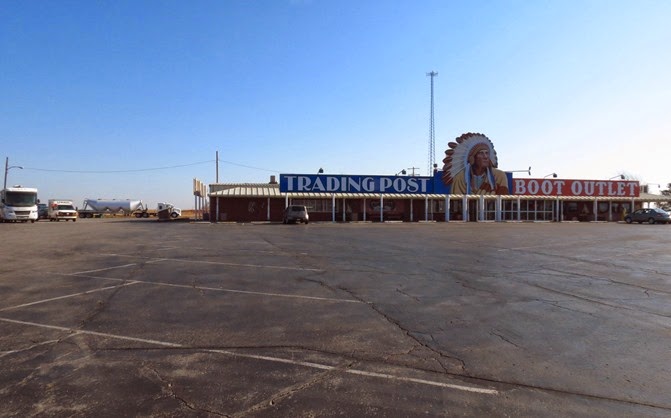 It was a shorter very easy drive. There are no Walmarts between Amarillo and Albuquerque so we stopped after 3 hours in Amarillo and had a leisurely afternoon.

The scenery was all wide open big sky country. There was hardly any traffic. 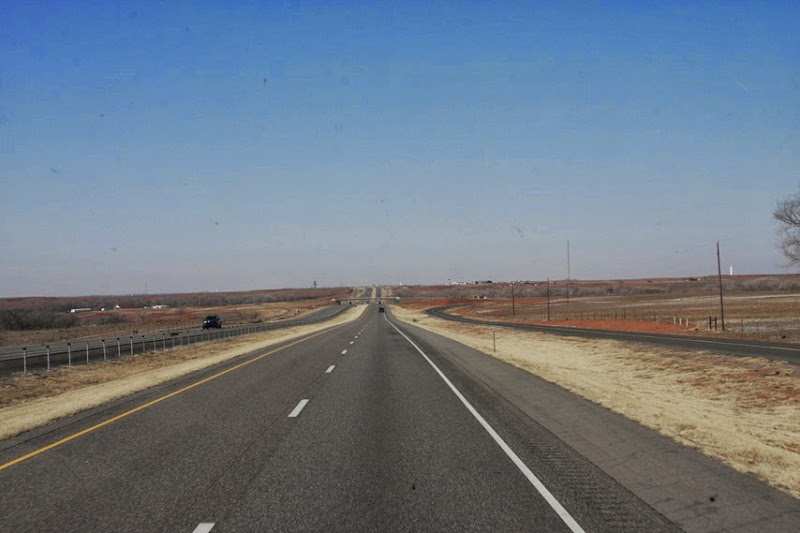 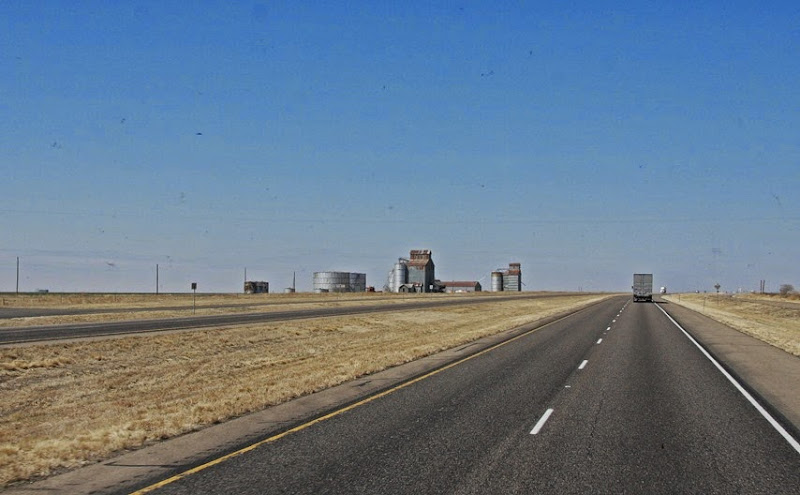 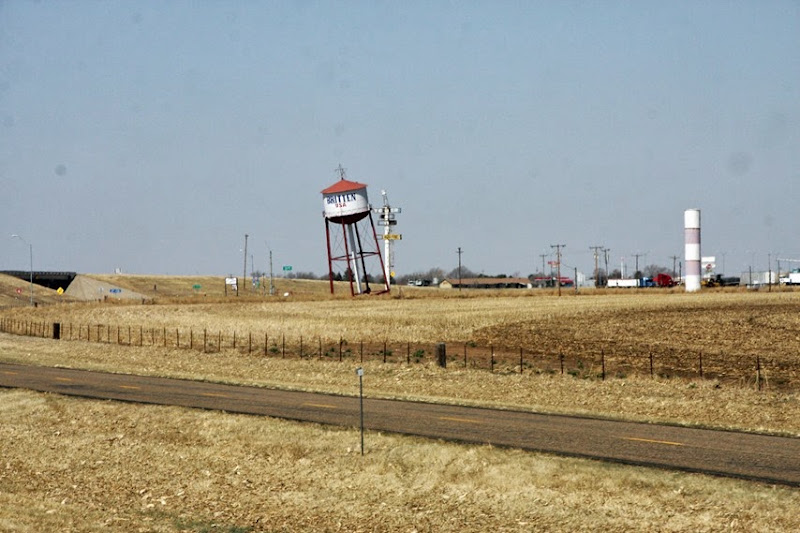 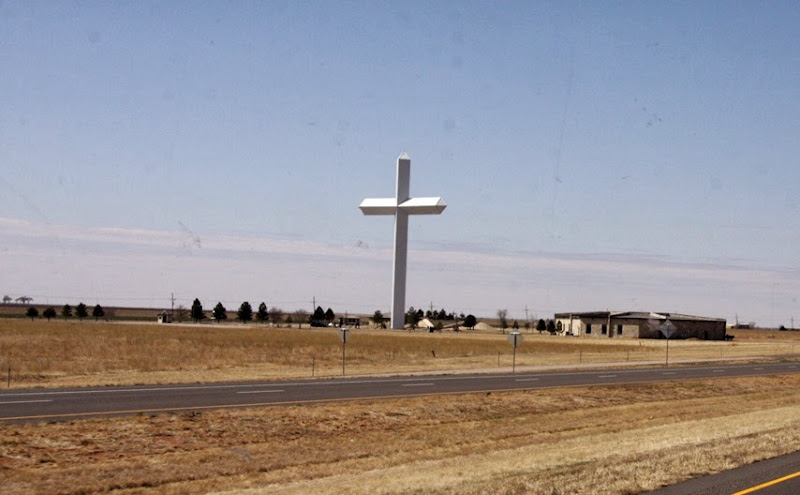 Everything is very dry. 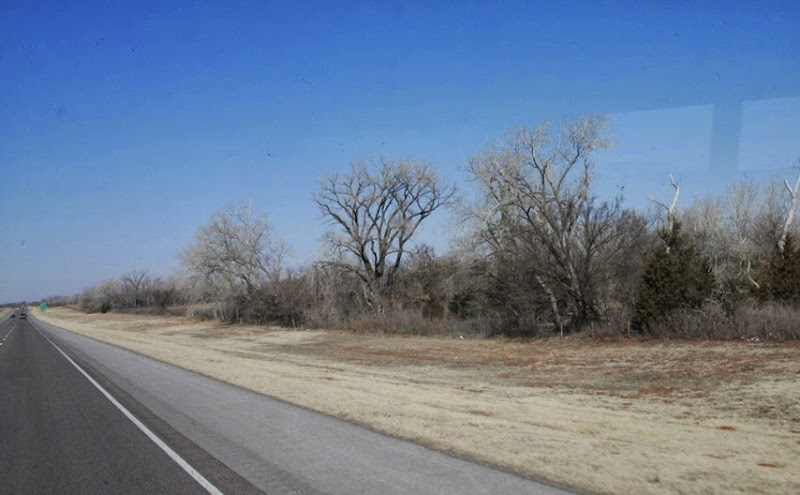 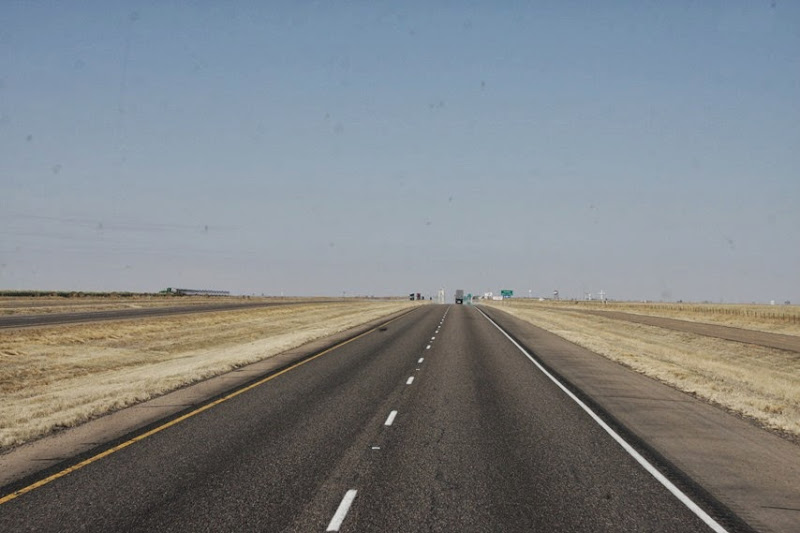 To get our internet fix after a two day drought we went over to a close by MacDonalds. This the only reason you would ever drag me in one of them. Jennie had a coffee and I had a sundae while we sat in a booth with our laptops.

We are not alone in the parking lot tonight. Last night and tonight are the only times that there has been another RVs in the lot and even then it has only been one other. The bus is from a hockey team. They all eventually came back from getting burgers and left.

Last night we got our first rain of the trip. It was hard enough that the sound of it on the roof woke us up a few time. It ended after we had been on the road for only a few minutes. The rest of the morning was just grey and cloudy. 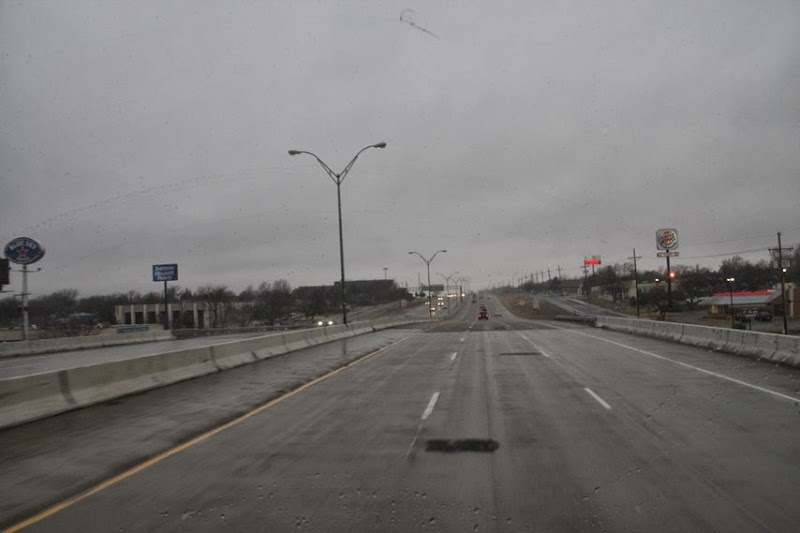 By the afternoon we were back to sunshine.

When I said there were no Wal-Mart's between Amarillo and Albuquerque, there is really nothing at all but wide open spaces and a few gas stations.

In the morning it was just vast cattle ranches. 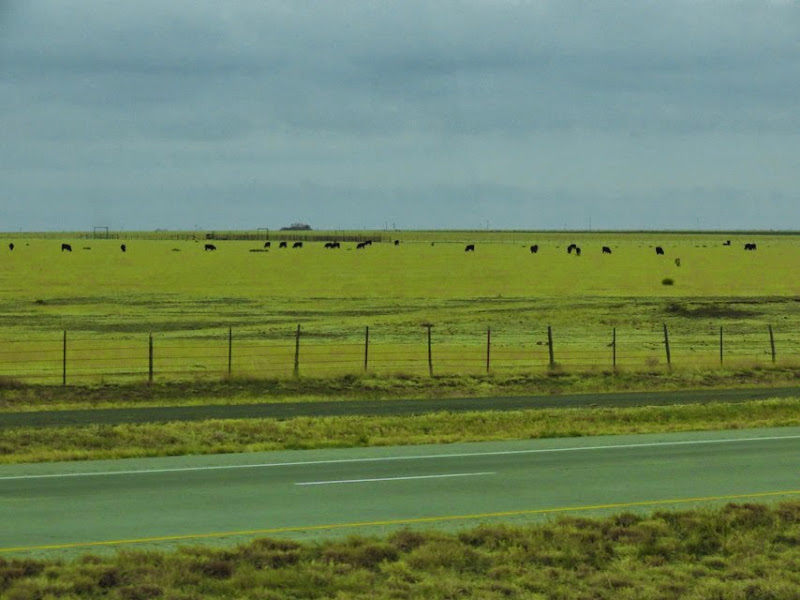 A one point we saw a huge dark splotch of land in the distance. We wondered if it was a massive junkyard. As we got closer it turned out to be a giant feedlot full of cattle. The picture below shows about 1/10th of the size of the place. 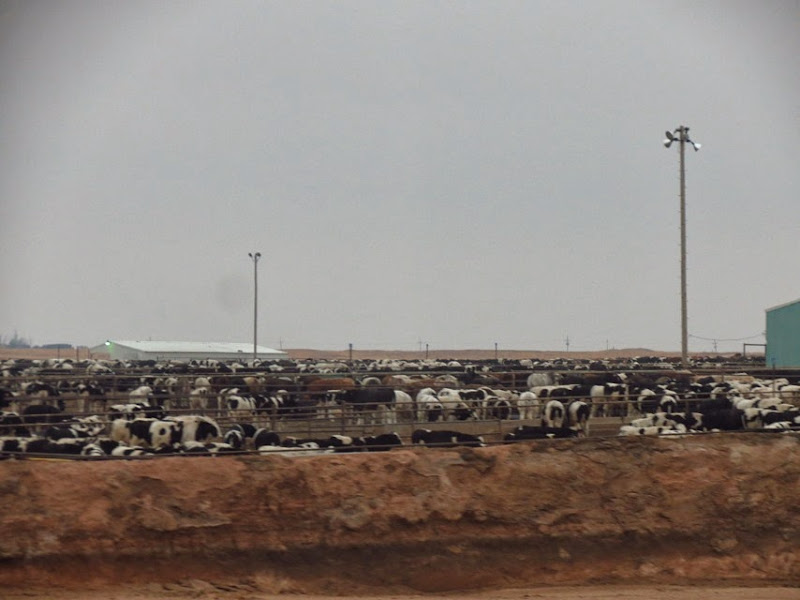 For many kilometres beforehand we had wondered why there was such a strong manure smell. Now we knew.

We stopped near lunch time at a gas station that had a Denny’s. We decided to have a heart attack lunch. I had a turkey grilled cheese and Jennie had a skillet with chicken, mushrooms, onions, cheese and some over sausage meat. Needless to say we had soup for dinner.

After lunch the scenery got more interesting as we entered the mesa lands. 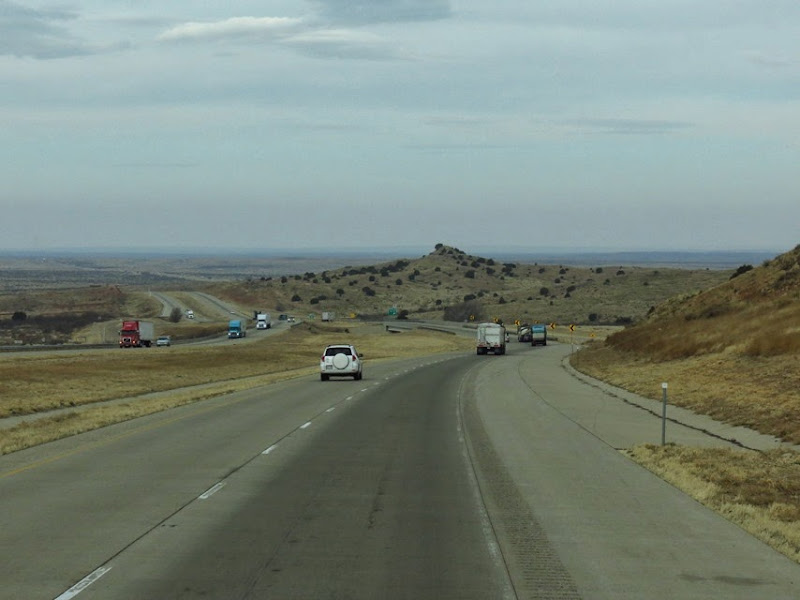 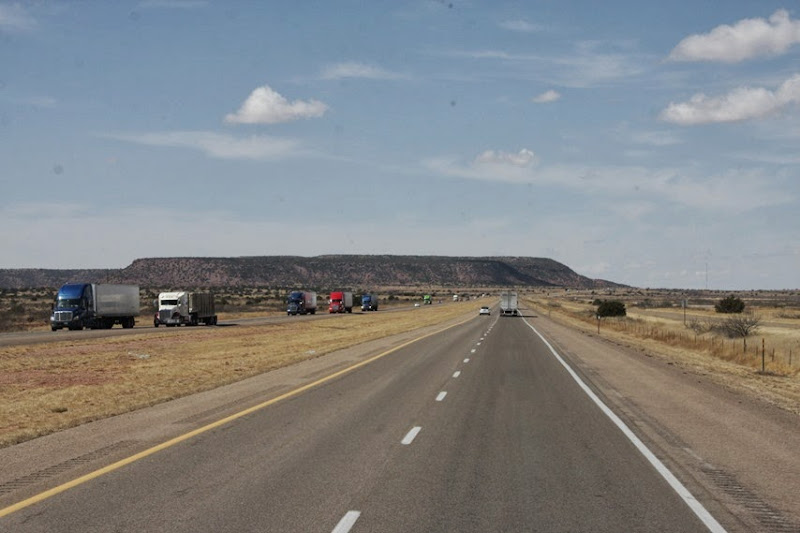 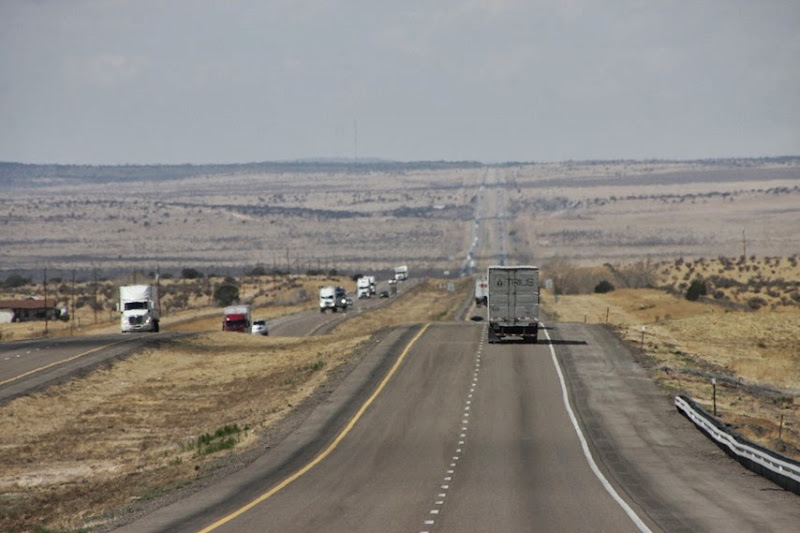 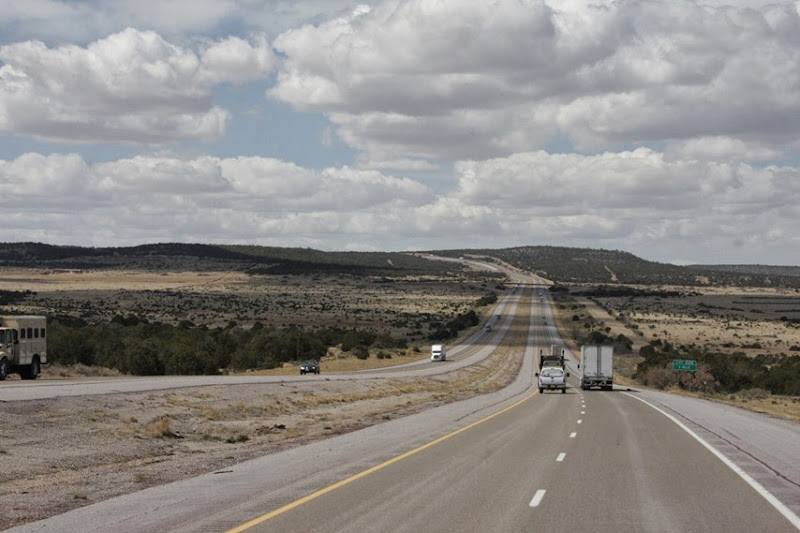 This was a tough day of driving both for me and the RV. With these wide open spaces the wind was fierce. It came from the south and a bit west meaning it was both a cross and head wind. For me it meant constantly fighting the buffeting. For the RV it meant constantly downshifting just to manage even 50 to 55 mph, where the speed limit is 75. I think our gas mileage for the day was around 5.5 mpg vs a normal of about 7.5.

Another challenge was that we were climbing for most of the day. Amarillo is at about 3600 feet. Albuquerque is at about 4900 feet but in between we climbed to 7200 feet. And it was not one steady up then down but an endless number of valleys with higher peaks at the far end.

It was a very tiring 7 hour drive.

One interesting thing was that most of the down into Albuquerque occurred on one approximately 20 mile long steep hill that took us right through town. It was wonderful after the day of struggling to finally be able to keep up with traffic with very little effort. It was especially nice going through downtown and to not annoy anyone. I don’t think I have ever been on that long and that steep a section of highway. It was a great end to the drive.

Jennie liked the colour scheme of the overpasses. Very southwest. 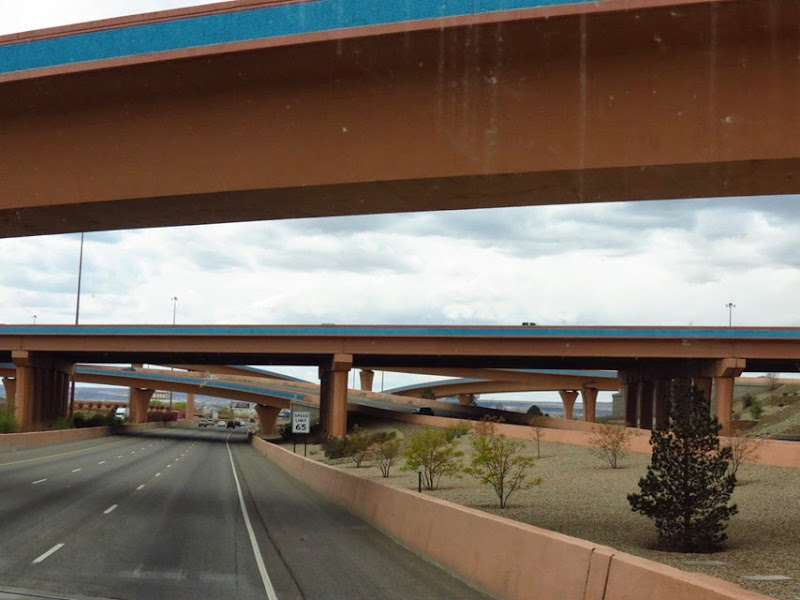 We have been going farther each day than I originally planned because the weather has been nice and we might as well continue on rather than just sit in a Wal-Mart parking lot. That has made us about 2 days ahead of schedule to get to our first booked campground at Zion National Park.

Therefore we are in a commercial campground (horrors) for the next three nights to take a break and explore the area a bit. 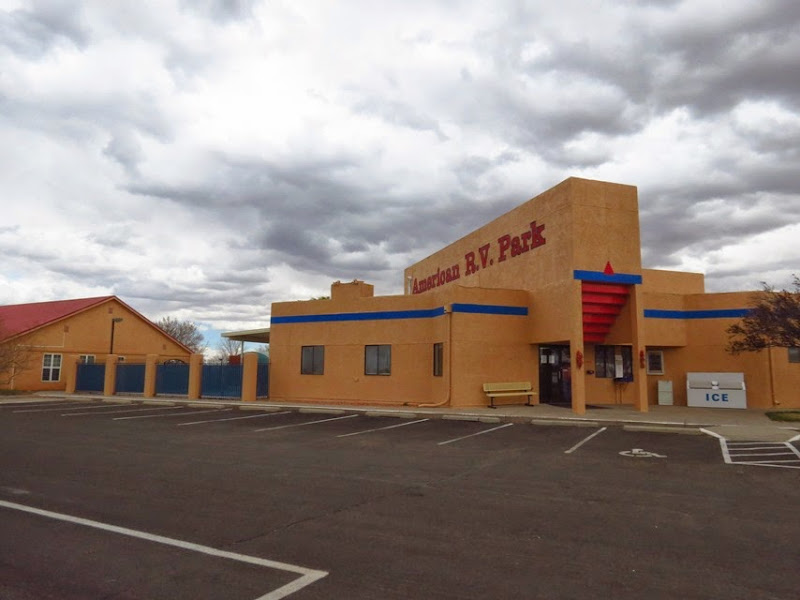 We also managed to complete another task that was a huge load on my mind. The two front tire on the RV have been wearing quite a bit on the passenger side of each tire. I at first thought that the alignment might be bad but I had it checked last fall in Toronto and it was perfect. The only thing I could come up with was that on each our trips out west we have had to battle some severe prolonged crosswinds from the south. To keep the RV going straight I always had to steer into the wind, sometimes so much that I could hear the tires squealing. Heading back east via different routes each time I do not remember the cross winds being a problem. The wear has gotten so bad I was worrying about a blowout.

I had joined an RV club that has a deal with Michelin to give members a discount on tires. Unfortunetely the discount is only valid with US dealers so I had to wait until we were on the trip.  Since I didn’t think RV tires would be that common I planned on calling up a dealer that participated in the discount plan while we were here to give him time to order them.

I went to the Michelin website to find the closest dealer. I called him up and asked if he had the size I needed and he said he has 12 already on back order and it could take 4 weeks to get them (Crap! or words to that effect). He usually expects people to want to change all 6 on their RV. Then he say that he has two that he has kept for emergencies. Can I have them. Yes, When can I come over. How about now.

It turns out his shop was less than a kilometre from the RV park and he is one of the few dealers that will work on RV because there are 3 RV parks close by so he gets a lot of business. He also knew all about the discount program and all the paper work that was needed.