It is still ridiculously expensive when you divide by the purchase price but the things it has allowed us to do are worth every penny.

The previous two days were mostly rainy and cold. On Wednesday it rained all day and night. Except for going out to do the laundry at the park we stayed indoors.

Thursday there was patchy heavy rain, which we always seemed to be inside somewhere when it happened. We took this opportunity to go out and have a restaurant lunch. We went to the Mad Chefs Café in Courtney. I had some curried chicken and Jennie had a grilled tuna burger. Both were excellent and if you are ever in the area I would recommend it. Go early though. It is a reasonably big place but even for lunch on a Thursday they were full at one point. 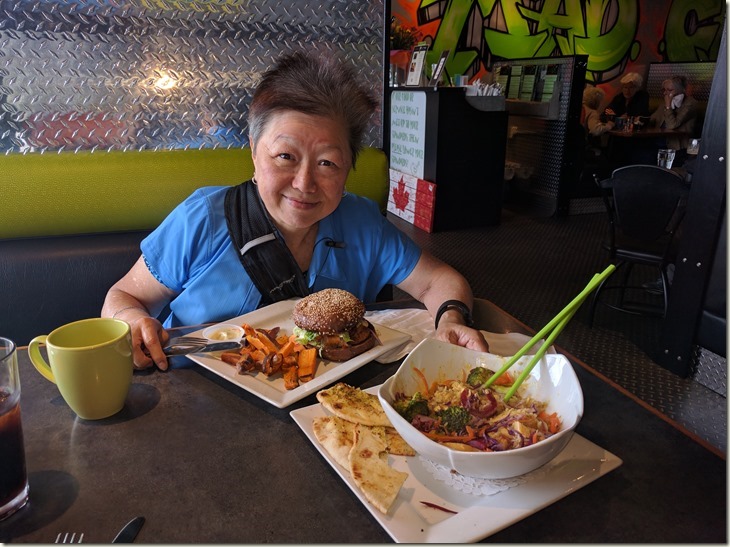 After that we did the boring necessary things like groceries and I got a haircut.

On the way home we made quick stop at Goose Spit, near the RV park in Comox. If the weather had been nicer we might have done a walk but the wind was blowing pretty hard and it was a very rocky beach. So just a few pictures and home.

We can’t go out to the very end of the spit because it is occupied by an Armed Forces base. This is looking back from the gate. 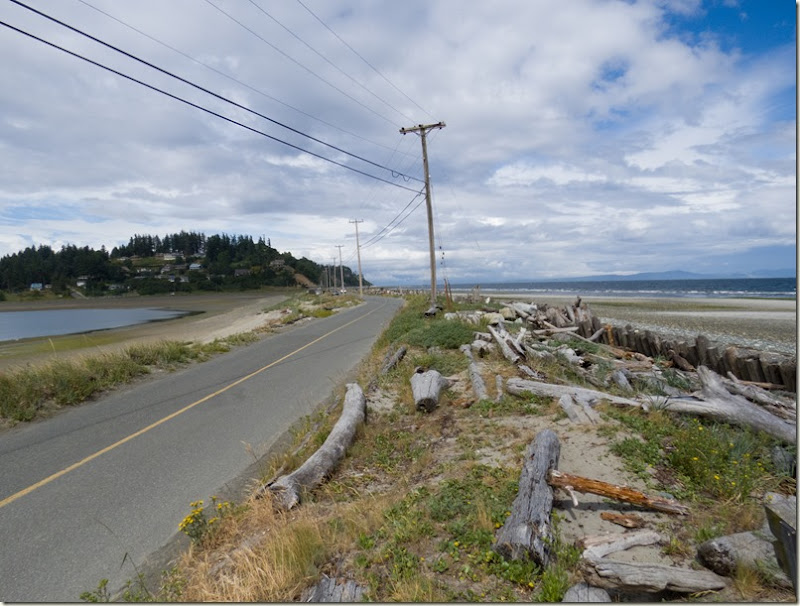 Instead of rocks for breakwater they have lined up a fence of large logs. 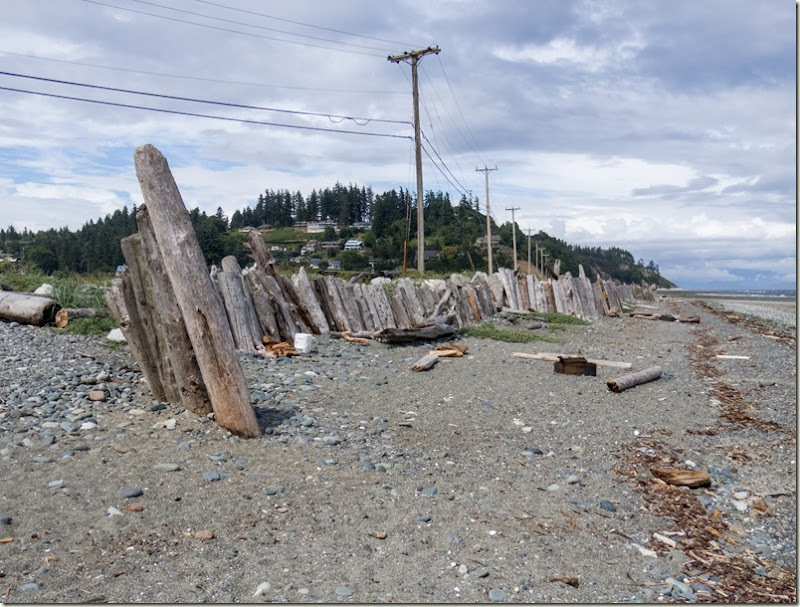 With all the large stones it didn’t look like a great walking beach.

A lone kayaker braving the wind and waves. 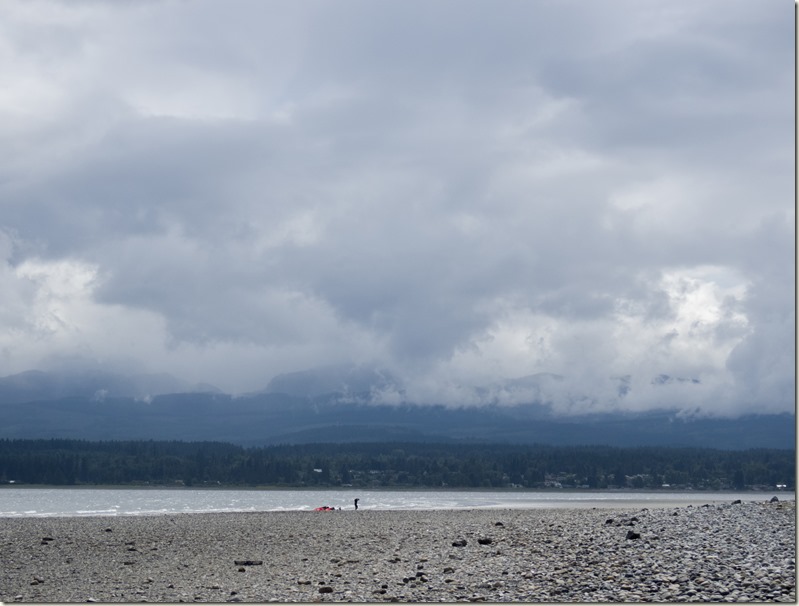 Today we did another short jump up the eastern shore to the Thunderbird Rv Park in Campbell River. 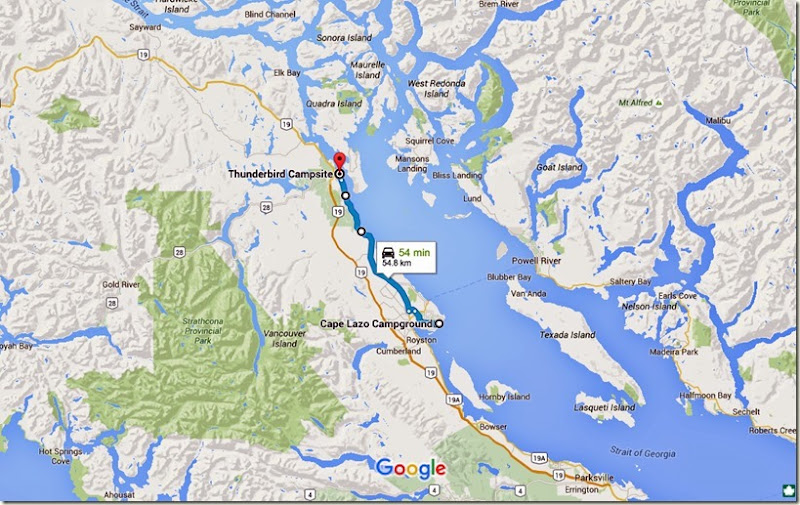 But first we had another swearing session. As I was using the jacks to raise the front wheels to remove the blocks I had put under them, the hydraulic line to the other front jack blew out. I quickly raised up the jacks so that we could at least move but that just spewed more fluid all over the ground.

So there we are with no jacks and the front wheels sitting on top of 5 2x12s.. After I calmed down a bit (not much) I first found a hydraulic repair place not too far away. I decided to remove the line myself as the extra height on the block made it easier. After a LOT more swearing I figured out which line it was and got it removed. I decided to remove one other line as well that looked kind of suspect.

Using the other wood blocks I have, I made some steps so that we could back off the blocks onto the ground. Off to the hydraulic repair place. They do not have a big parking lot so I had to park on the street. I gave them the lines and they quickly built some new ones.

The sand and gravel business next door had a big lot. The owner of the hydraulic place asked the owner of the gravel lot if I could park there to replace the lines rather than having to crawl under the RV on the street with cars whizzing by. The gravel lot owner said sure so I pulled in. He came out to talk and it turns out that he has a big RV as well so he could sympathize.

After a lot more swearing and crawling around underneath the RV, with very dirty pants and a ruined shirt, I finally got the new lines installed. Add 4 liters of hydraulic fluid and miracle upon miracle, the jacks and slides work with no leaks.

We had started to leave the RV park at about 10:30 and it was now 2:30 so it was a rather long process but once again it could have gone much worse so I try to be positive. My body sure hurts though.

Onwards to Campbell River. Thankfully it was a very easy drive.

The RV park is on a spit of land between Vancouver Island and Quadra Island. All of the cruise ships coming from and going to Alaska have to pass through this narrow passage. 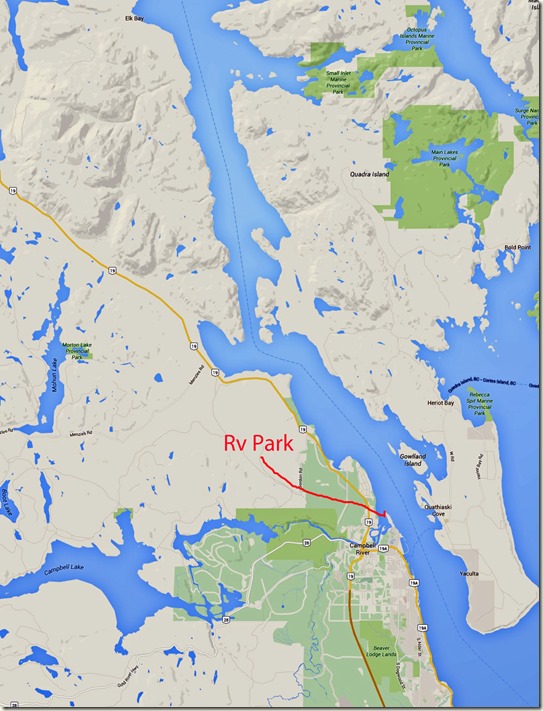 Our site has a front row seat. 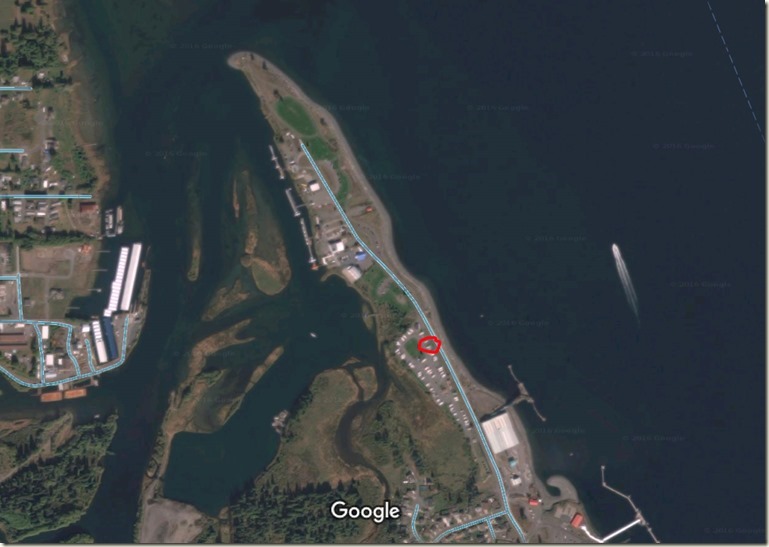 The view out the front window with Quadra Island in the background. 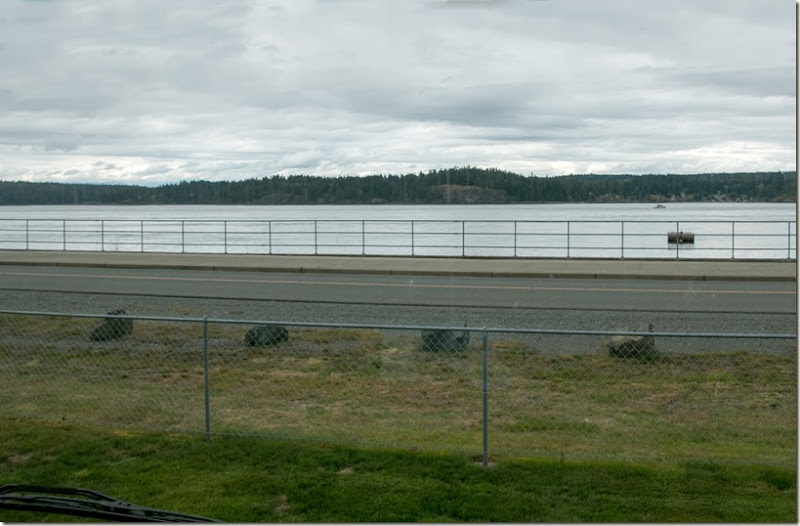 The sites here are kind of cramped but they are really well setup with hookups at both the front and back of each site. This allows 5th wheels, which usually have a big window at the back, to back into a site while Class A’s, with the big windshield at the front, can go in frontwards and each will be near their hookups. 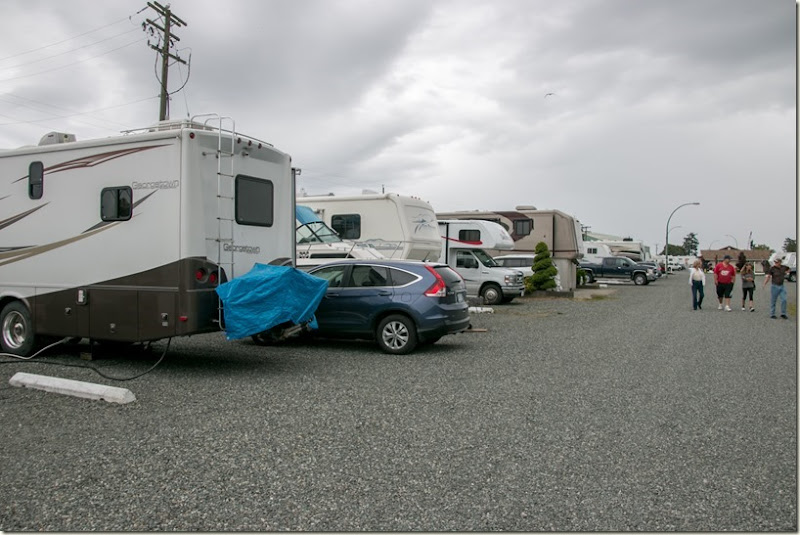 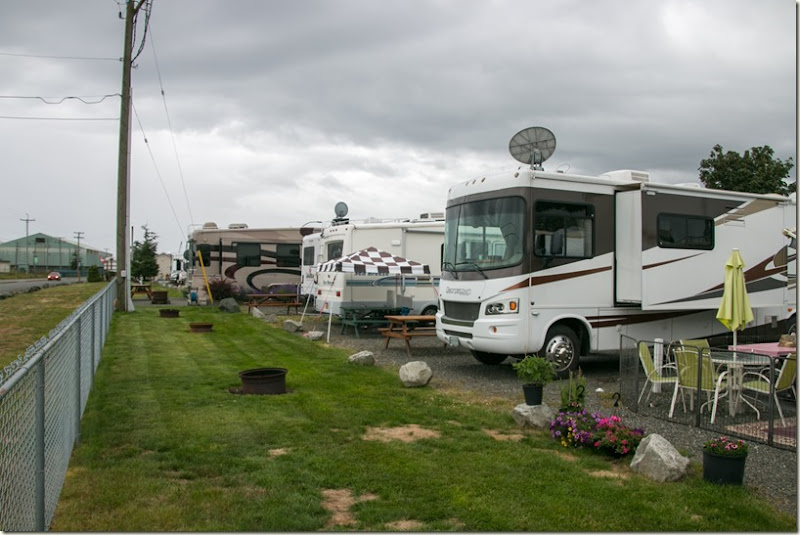 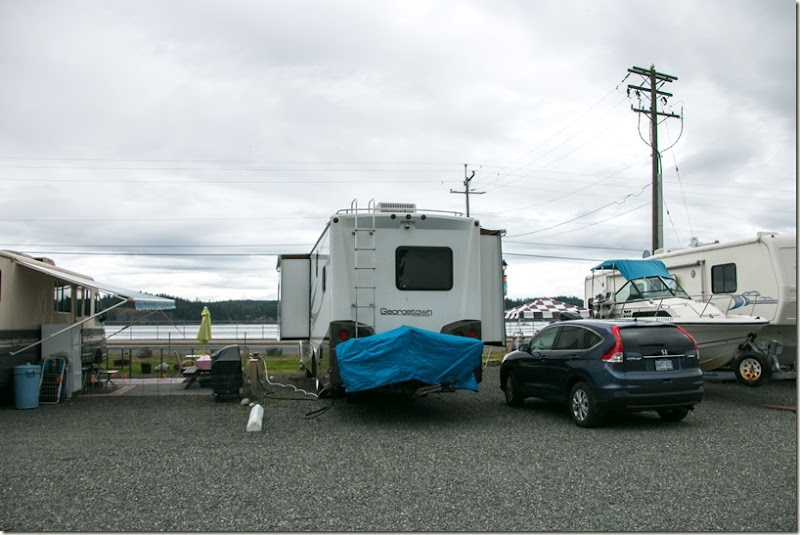 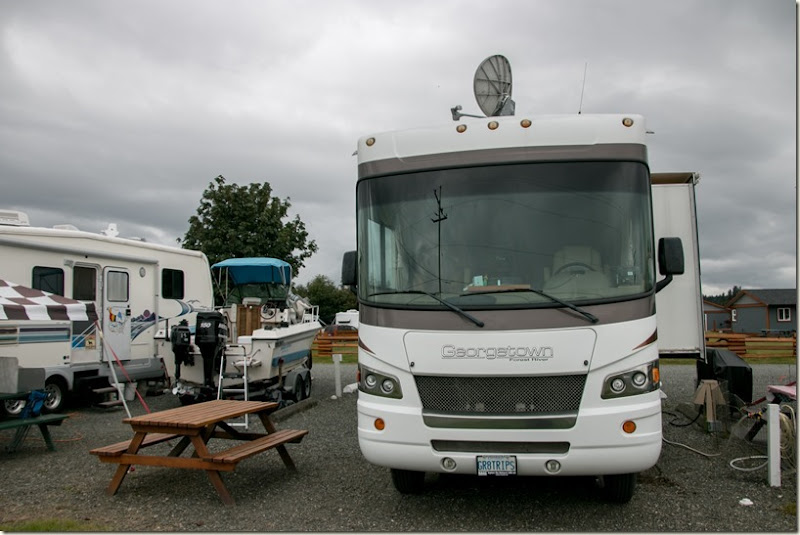 I had wandered out to the fence in front of the site and not 5 seconds after I moved back to the gravel these popped up. 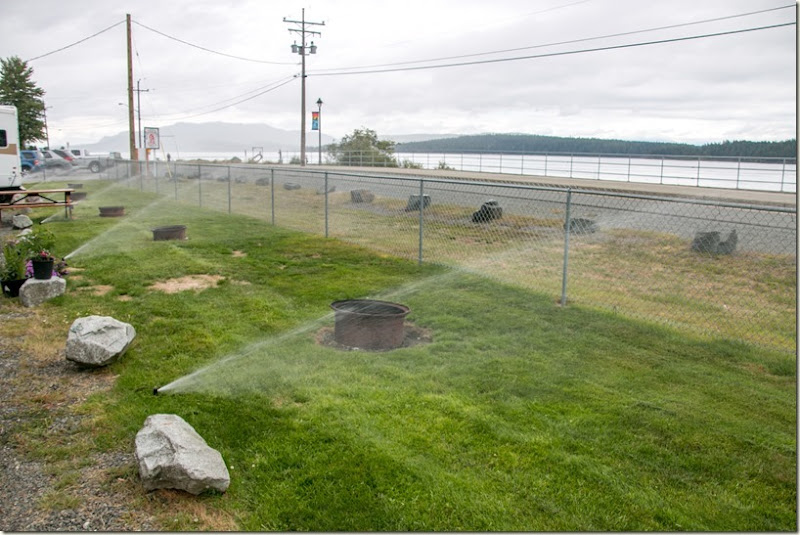 The weather is rather grey and it actually started raining just after this but the forecast for the rest of the week looks great.

Two big ones went by tonight. I’ll include pictures because they are the first but I will try and resist on the other nights we are here. This is zoomed into approximately what I could see by eye out the windshield. 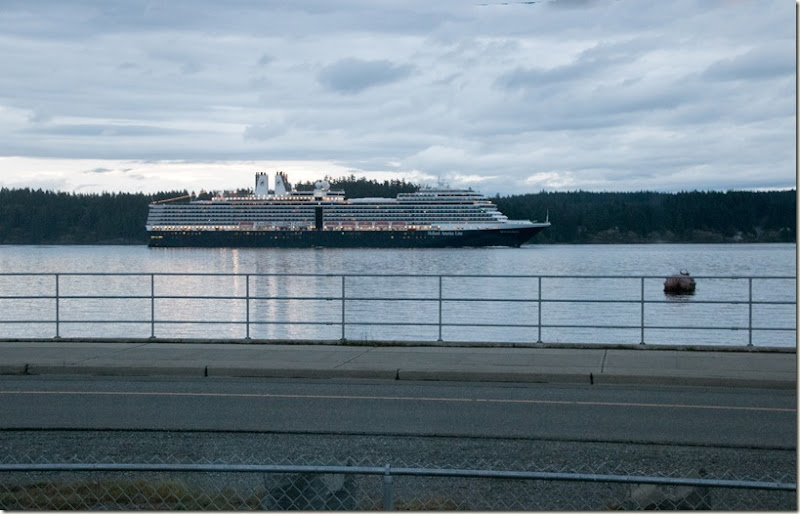 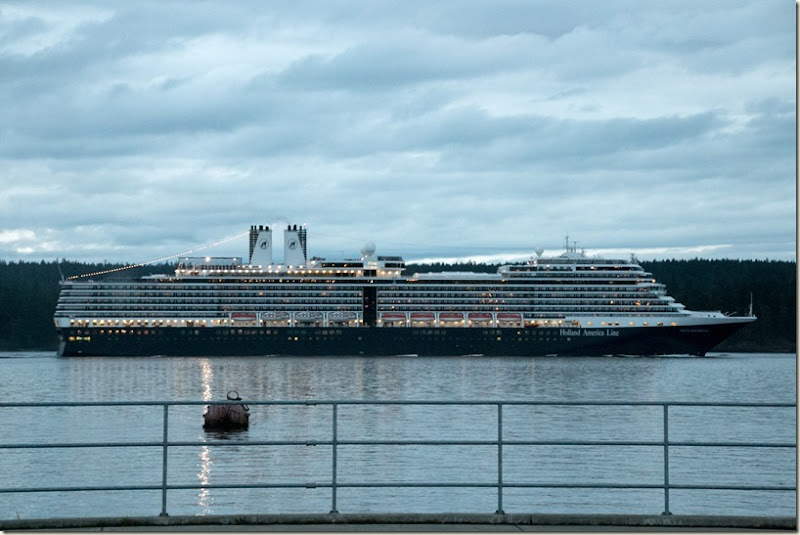 And the Coral Princess. 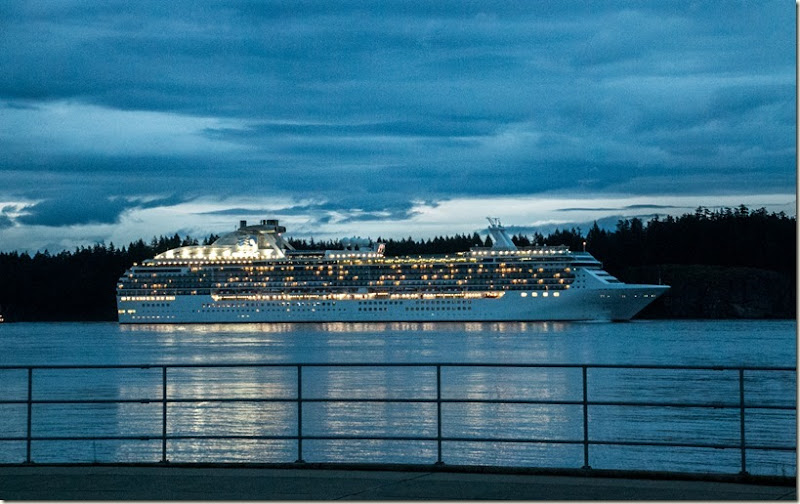