We have a get together with friends next weekend near home. Rather than staying in the RV, parked in front of the house for the week, on Monday we moved to a campground near Hamilton.

The reasons for the move are, first to visit more with our daughter Annie who lives in Hamilton. Second, to go somewhere with a power hookup so that we could run the air conditioners in the heat.  And third, Hamilton has literally around a hundred waterfalls dropping off the Niagara Escarpment as it cuts through the city.

There aren’t a lot of choices for a campground around here. Fifty Point Conservation Area has full hookup sites for large RV but is not much more that a parking lot in a field. It does have free, reasonable speed, WIFI as a bonus though.

We spent the afternoon relaxing and then took a quick look at the beach in the conservation area after dinner. 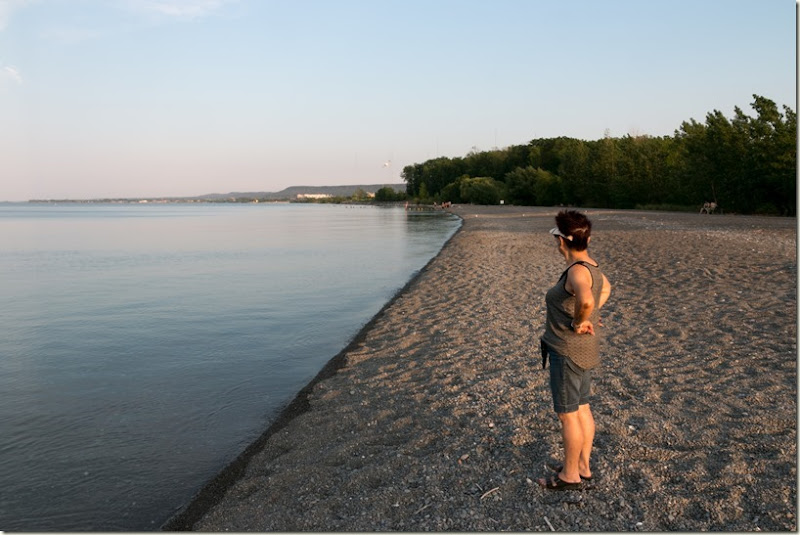 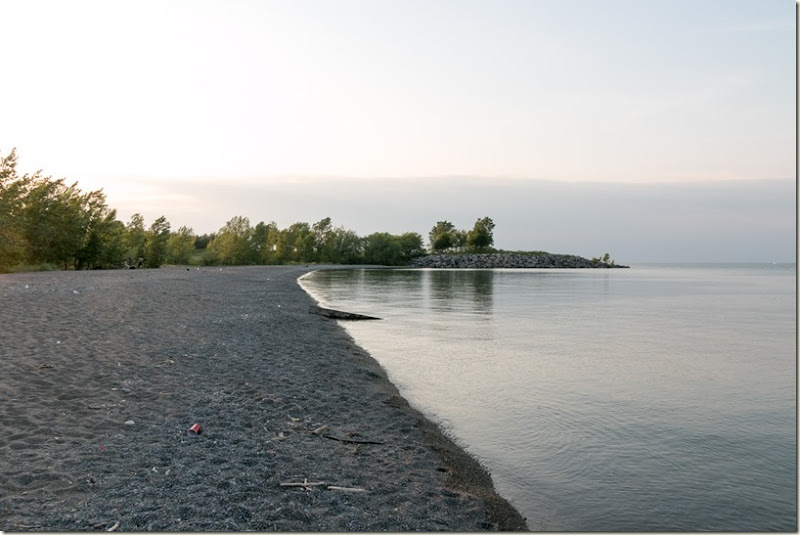 The beach is made up of small rounded rocks. No shells to collect here. 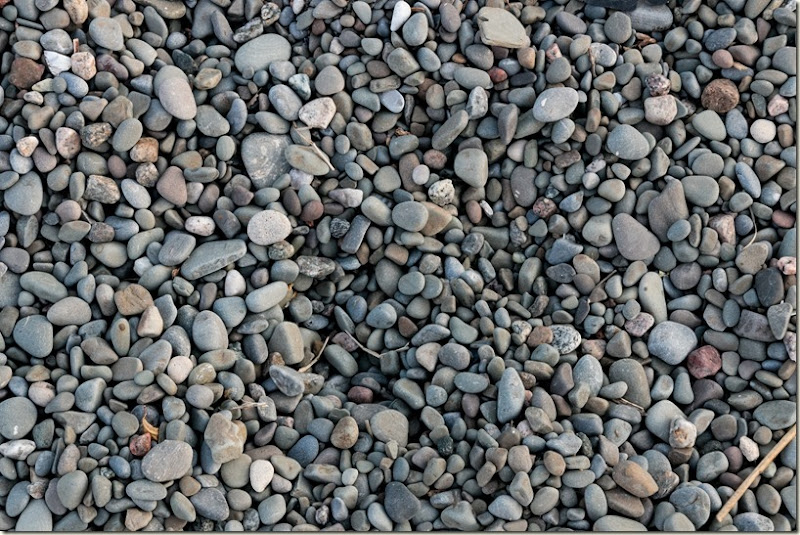 I felt the water and it was way too cold for me. These guys playing on the pilings down the beach wouldn’t go in either. 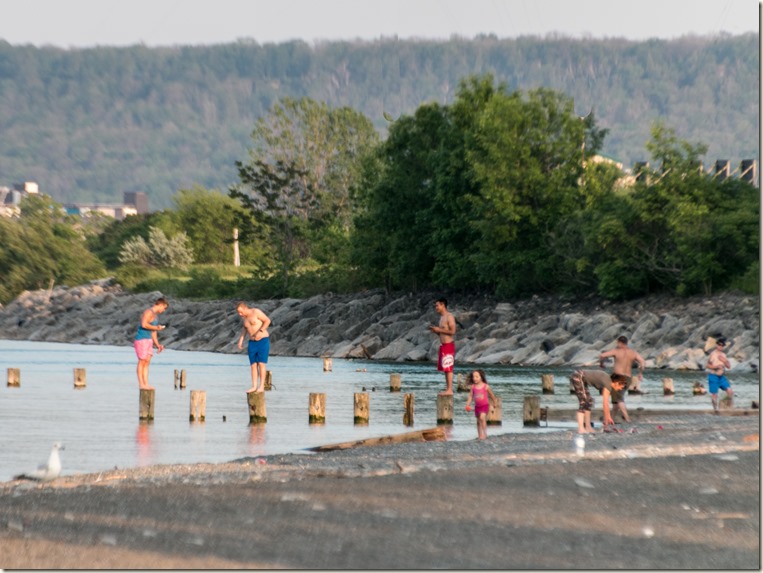 Our daughter Annie’s day job is to take care of Danielle’s two sister’s four kids. The oldest has just started school so she “only” has three during most of the day. The youngest just turned one. Yesterday we went along as they went to the community center to use the gym and all its toys.

The kids know us well enough by now that we gave Annie a break from having to herd all three. The youngest is just so easy going. She will let anybody hold her and always seems to have a smile. 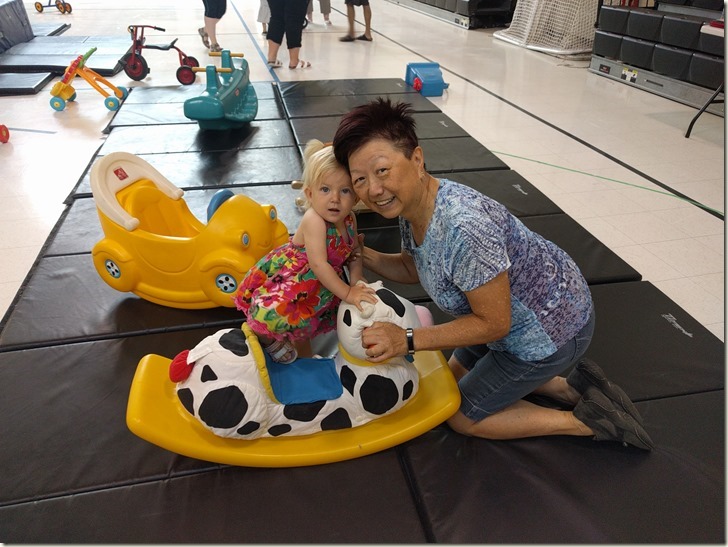 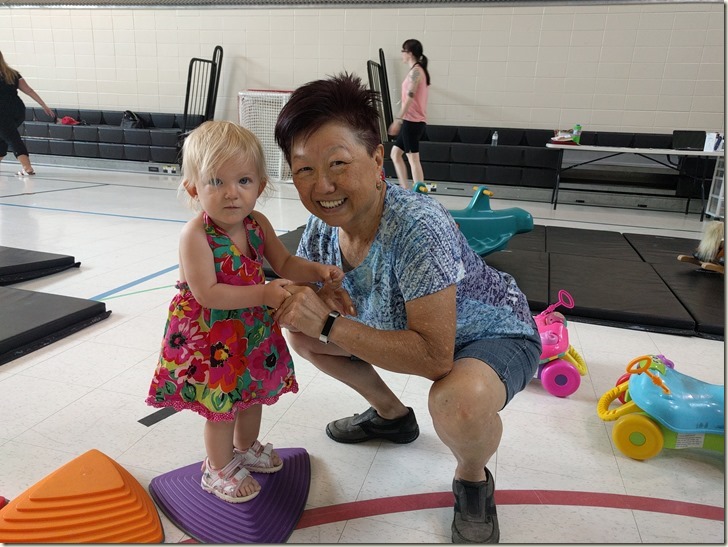 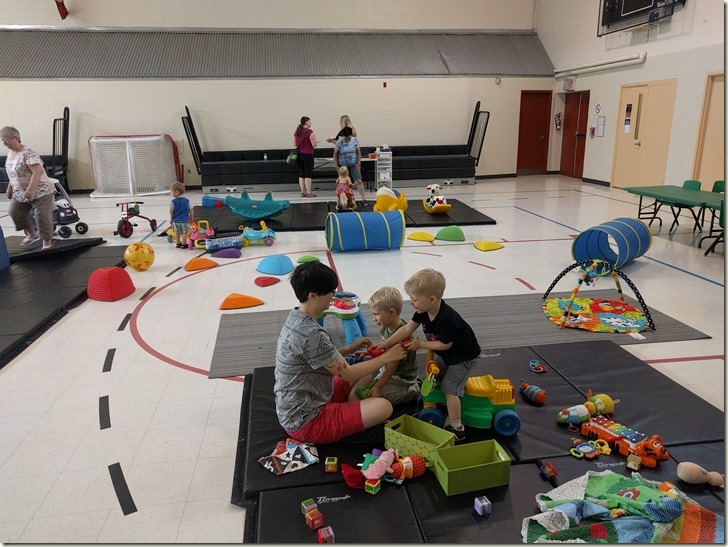 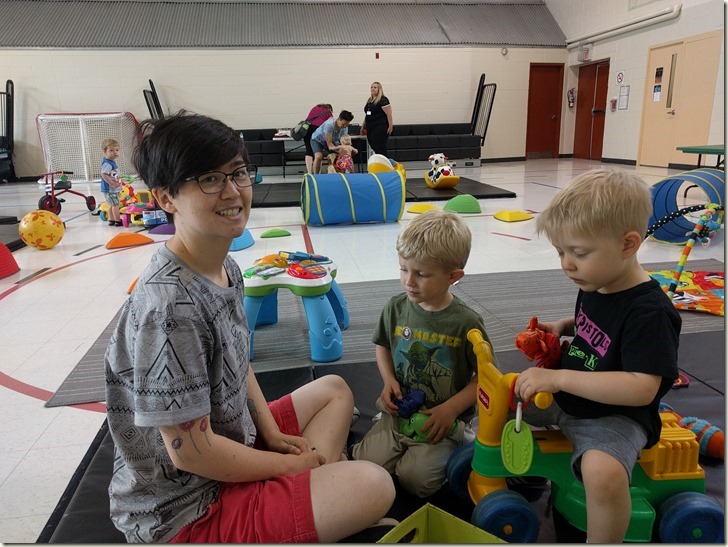 Time for a snack of raspberries and peanut butter bread. 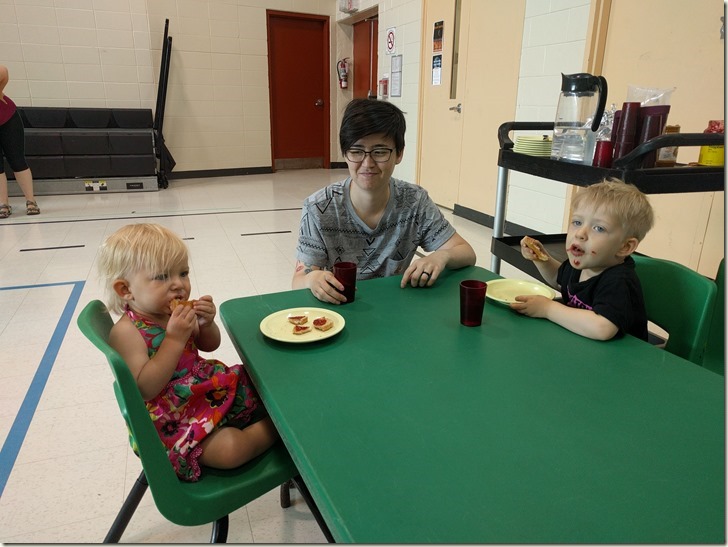 She can really pack it in. She had seconds and thirds. 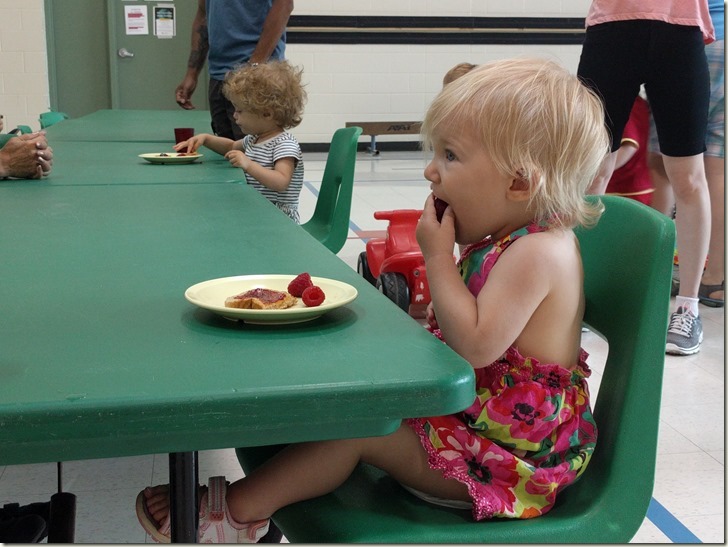 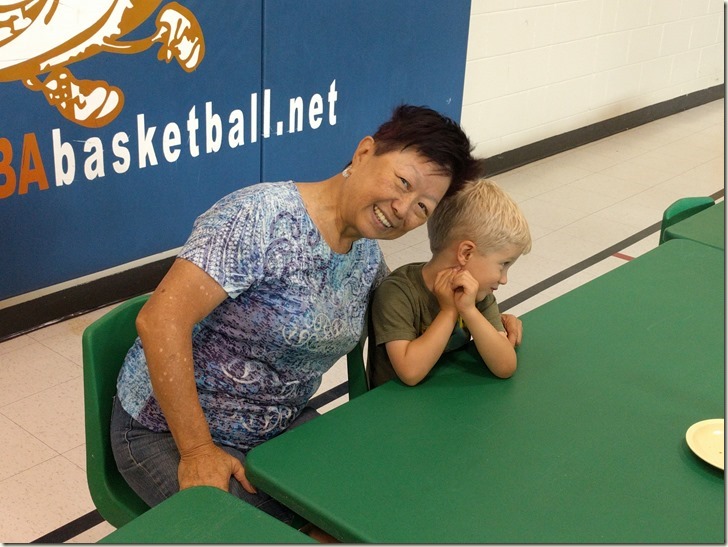 Annie and Danielle took us and Nikki out for a pizza lunch. Afterwards we just went back to the RV. We are still a little burnt out from the wedding.

Today was waterfall day. Just to give you an idea of how many there are, the city produced a map with each waterfall that has a name shown in blue. The red line is the escarpment. 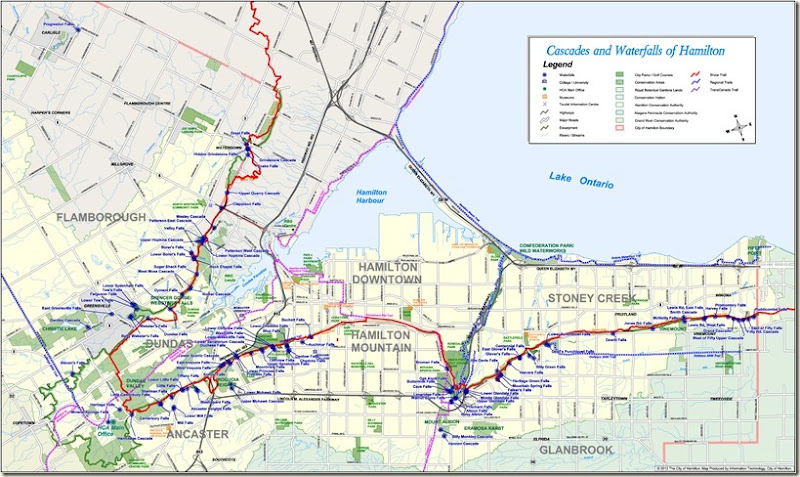 They have a website that describes the major ones but with so many it was hard to choose just a few. I should have stuck with the ones in conservation areas because our batting average for good ones today was not great. I picked some of the taller ones. Of the 6 we went to, 3 were rather unimpressive and very hard to see from the only accessible viewpoints. They also had very little water going over them, which surprised us given all the rain this spring. One was very good. Another was good for me but Jennie couldn’t get close because the trail was way too steep. The last was impressive but you could only see it from far away.

Note that all of the ones we went to were in the list of Top Waterfalls on the website.

On the way to our first stop we drove across Ridge Road, which skirts the edge of the escarpment. There was a mix of older normal sized homes and newer monsters, all with a great view of lower Hamilton. There were a few viewpoints where we could park and look. 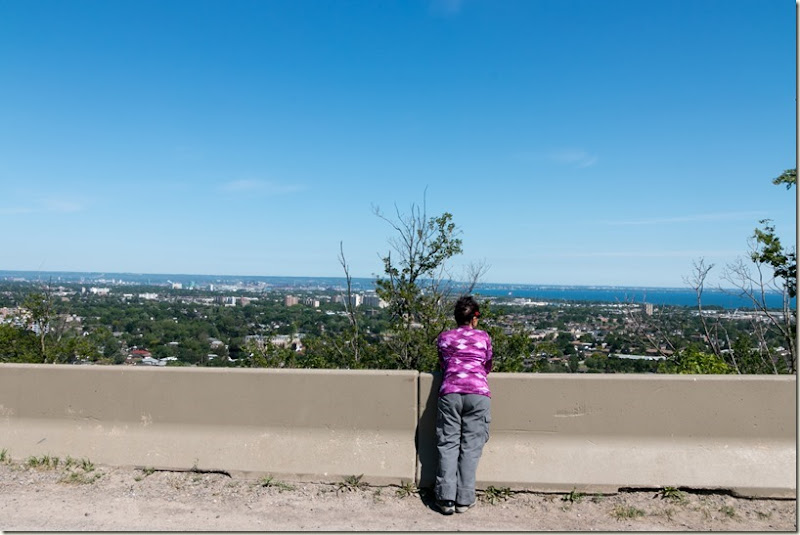 All the way from the Skyway bridge over Hamilton Harbour, on the left. 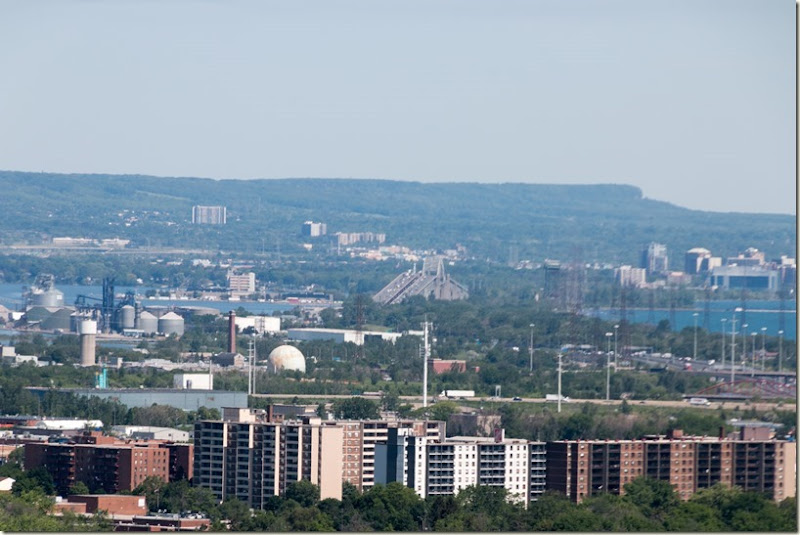 To the skyline of Toronto on the far right. 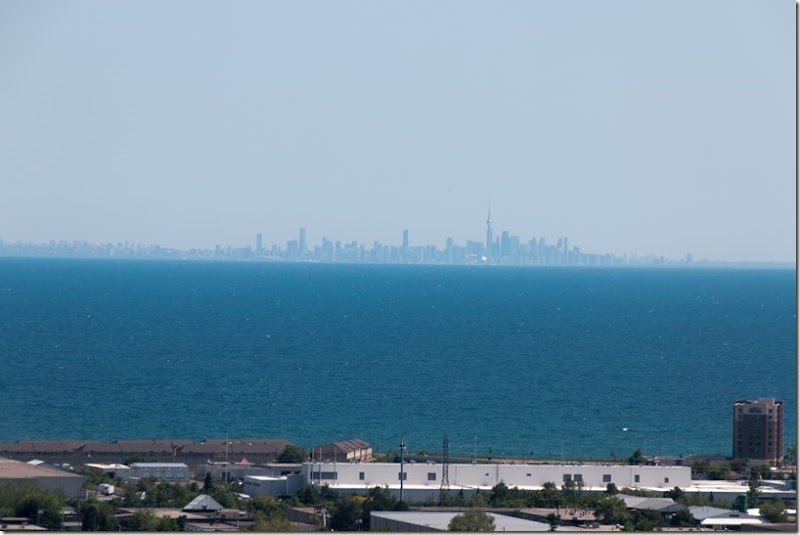 We first tried to go to the Devils Punchbowl but its parking lot was filled by a Mazda Miata car club. There was nowhere else to park so we came back to it at the end.

Next was our first strike. Felker’s Falls was just next to a small parking lot in a residential neighbourhood. This was the best view. Thankfully it was only a short way from the car. 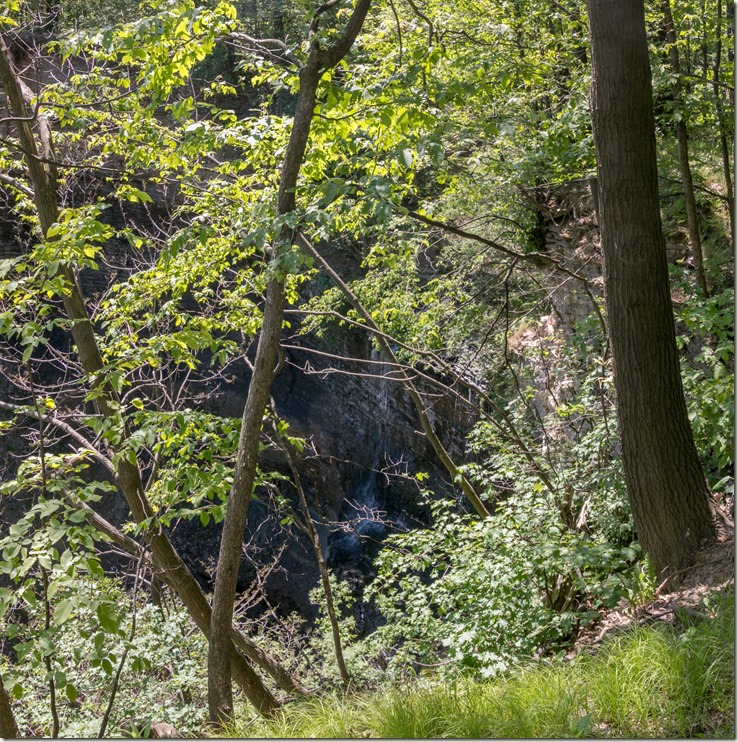 Albion Falls was the best one of the day.  It was very close to the parking lot but the trail down to the bottom was quite steep and rocky. 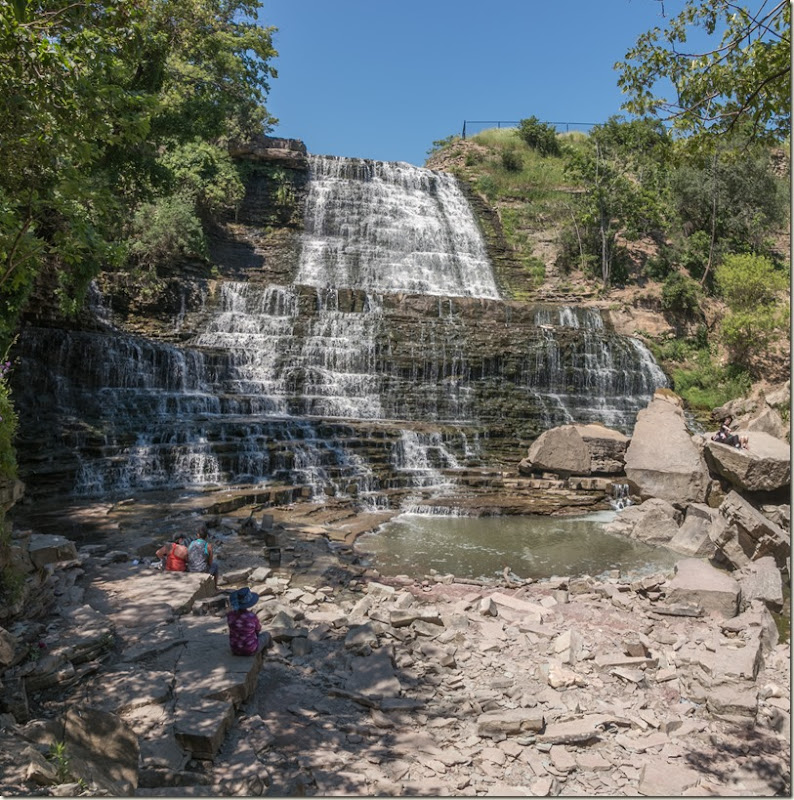 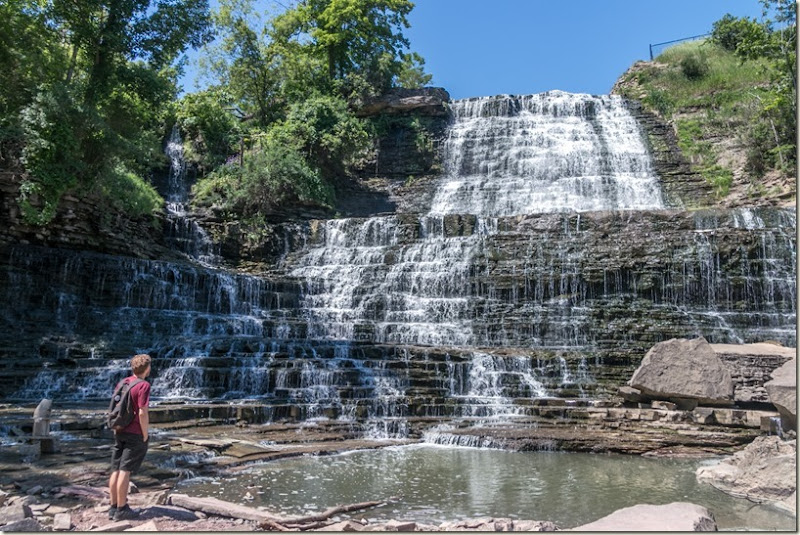 Working our way back up to the car. 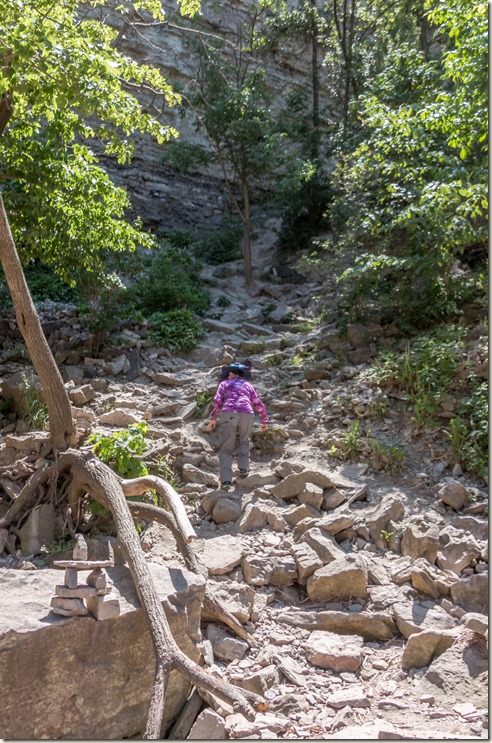 The next strike was Buttermilk Falls. It was just a short way up the road from Albion Falls. This was the viewpoint. I guess the road used to be here because I could see no other reason for the auto guardrail. 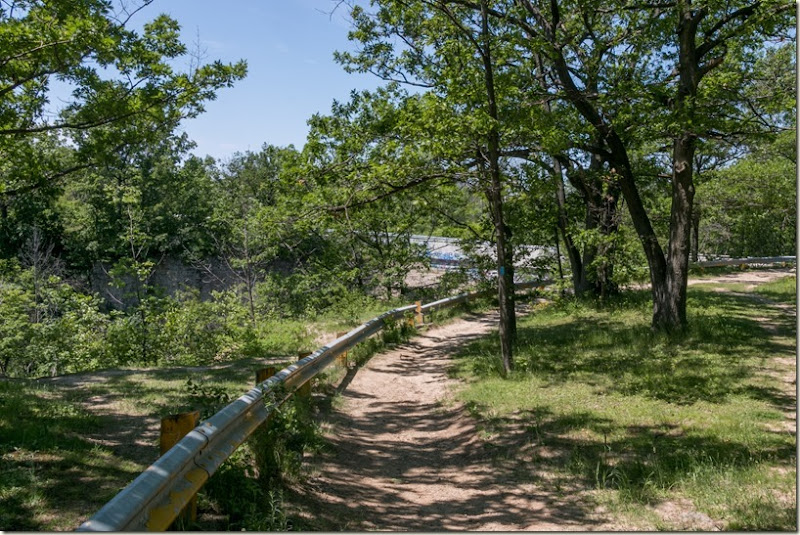 If you didn’t hop the guardrail and go right to the edge you couldn’t see anything. This was the best I could do. An obstructed view of a trickle coming out of a culvert. 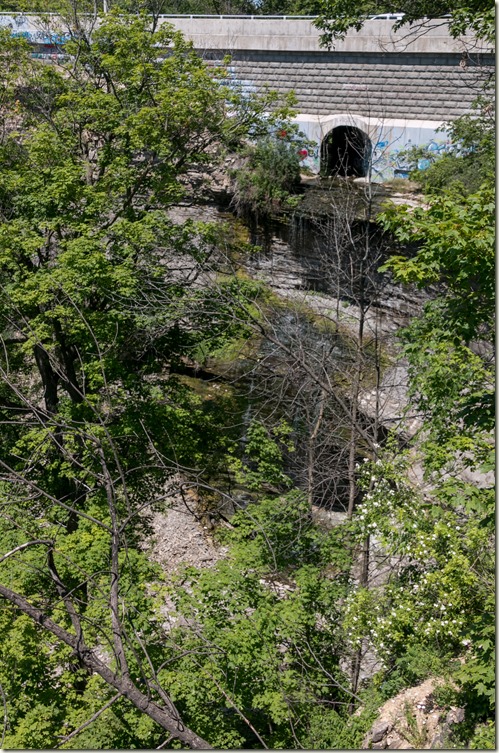 Next was Lower Chedoke Falls. Here we had to park at a golf course and then walk a short way along a rail trail. The instructions said to then climb some stairs on the Bruce Trail. At the first landing take the trail along the creek to the stairs down to the falls.

Well the trail along the creek was so steep, rooted and right along the edge, high above the gorge that we almost turned back. There were also no stairs at the end.  There was about a 5 foot drop where you had to hang onto some roots to get down. I managed to get down but Jennie could not with that large a drop.

The falls were quite pretty. 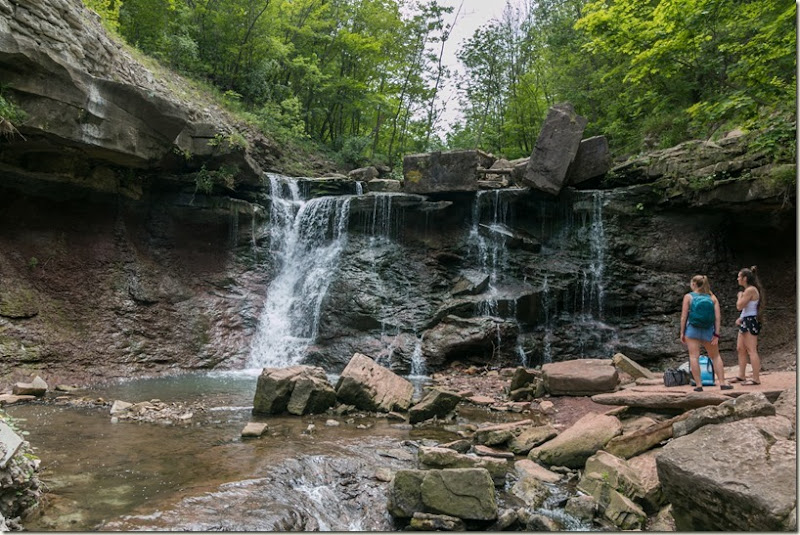 You can see Jennie in the far upper right in the picture below. The two girls are climbing up the “stairs”. 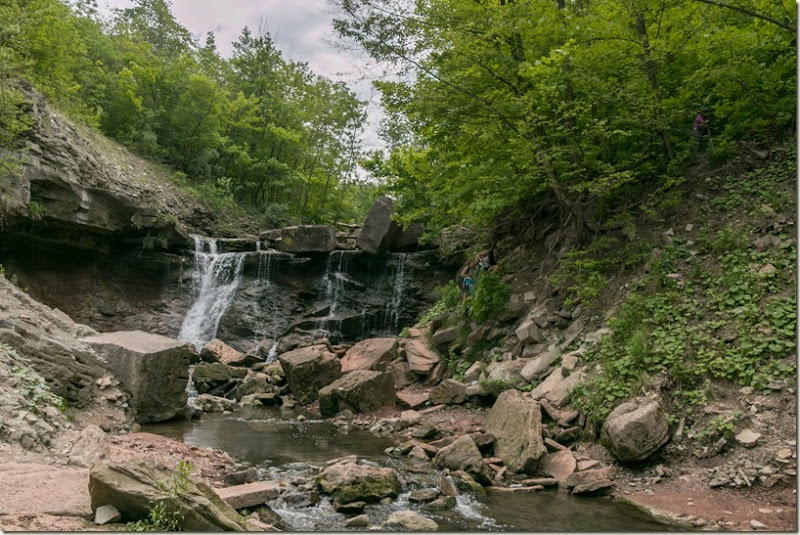 It turned out we could have skipped the side trail. From the rail trail you could climb through a hole in a fence and just make your way up the creek bottom. We would have gone back that way if Jennie could have made it down. 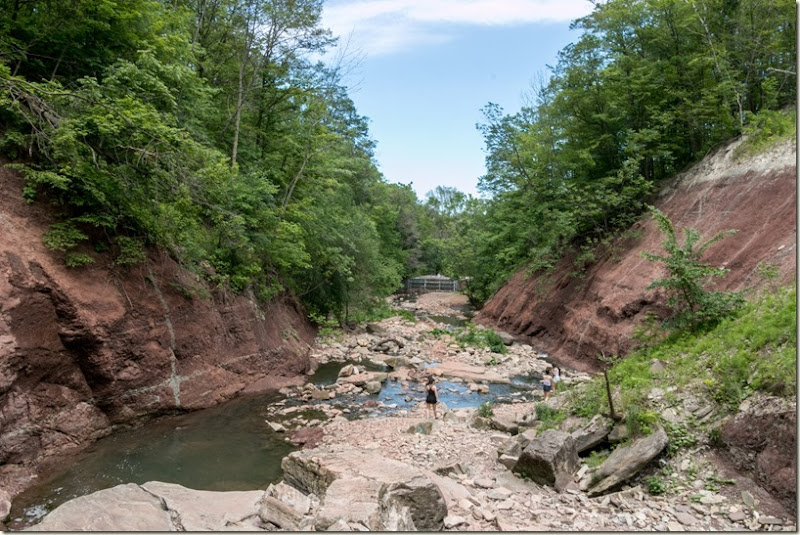 Our third strike was Scenic Falls. Again they were only a short distance from the car but… As we were walking the trail we asked a lady if the falls were just ahead. “Yes, ahead on the right”. As we got there we asked a another hiker where they were. He said, “There aren’t any falls here. The only ones I know of are back past the parking lot”. Bad sign.

We eventually did find them. Can you see them? 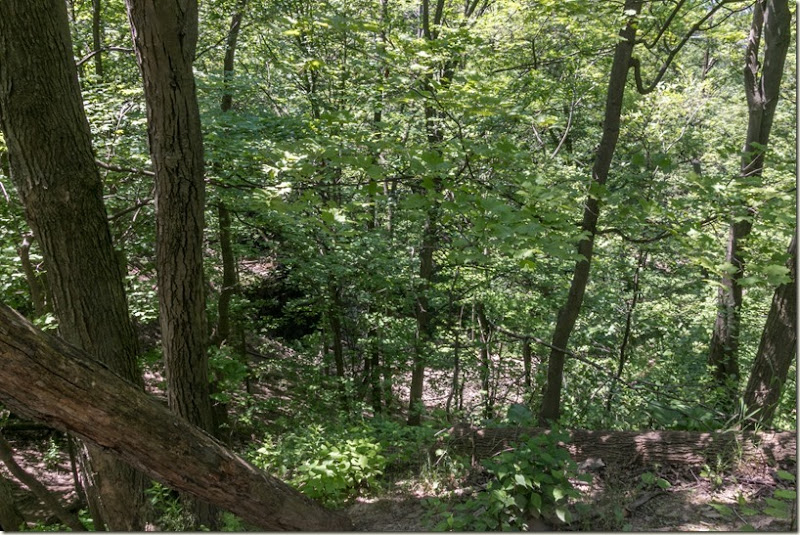 The little black splotch just left of center. Another trickle of water over a ledge with no obvious trail to get closer. 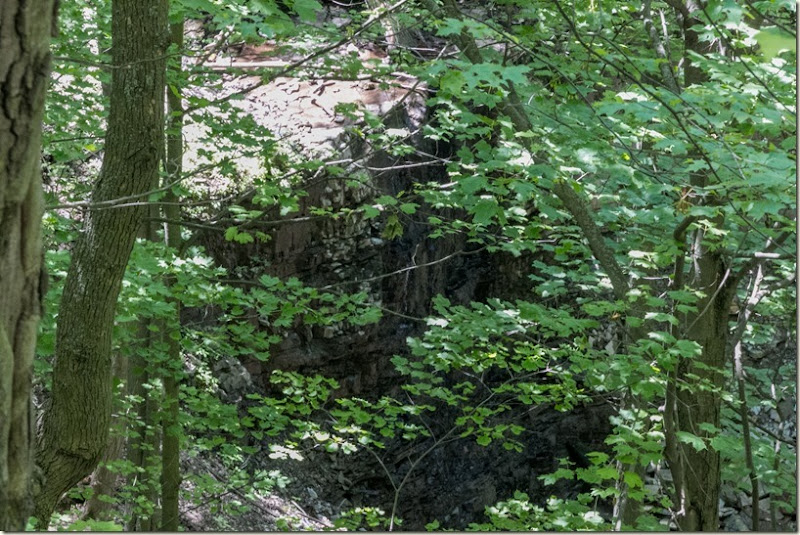 I had some more falls on the list but we gave up and went back to the Devil’s Punchbowl. This was an actual conservation area. There was a railing around the gorge but the only indentation that looked like a viewing area was completely blocked by trees. We could see all kinds of spots where people had ducked under the railing to get to the gorge edge. Even most of these were somewhat obstructed. 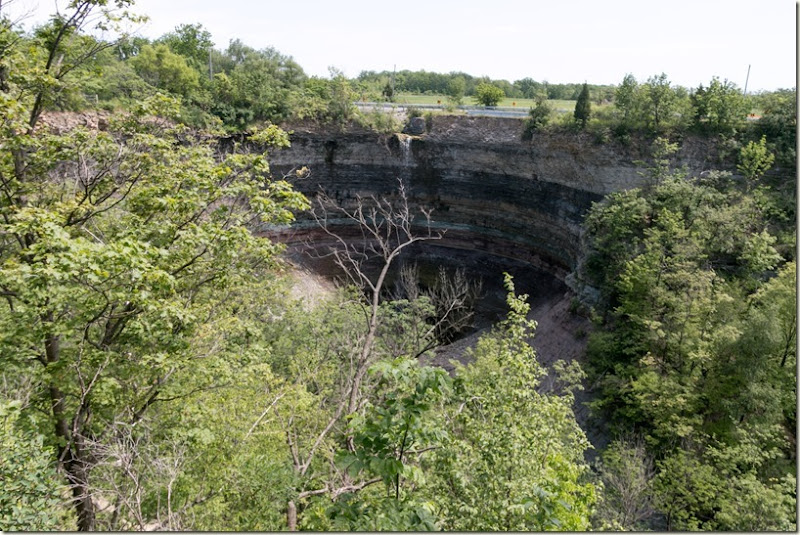 At one it looked like people had actually tried to climb down the gorge. Way too steep and crumbly. 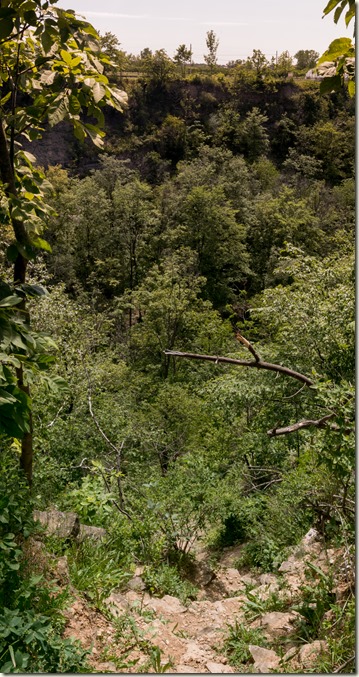 This was the best view. 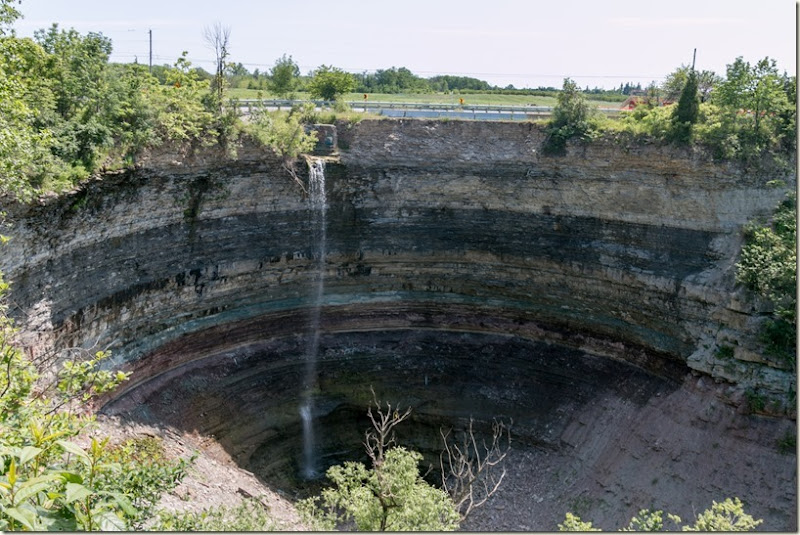 Sorry that this was kind of a negative post but it was rather disappointing. I am glad we had a least one good one.

We had even talked with Annie about possibly taking the kids to a waterfall. I sure am glad they didn’t come today.