We will be in Utah for April and May while the temperature there is bearable. On the itinerary are all the nation parks in this area. We will go to Zion Canyon, Arches, Canyonlands, Capital Reef, Bryce Canyon, and Grand Canyon.

Once it gets too hot we will move to the higher elevation of Colorado in June and July, ending in Rocky Mountain National Park before we head home.

To get ready, our first problem was to get the RV out of the snow bank it was parked in at the storage lot. The December ice storm had left a thick coating of ice on the roof. Since we have not had any warm weather since then it was still there. I had to remove the ice because if any of it came off while I was driving, it could kill someone.

A few weeks a ago I went up and shovelled all the snow and some of the ice off. On Monday I went up again and most of it was melted and the rest was easy to remove.

The big problem was the vinyl covers I put over the tires to protect them from the UV rays over the winter. Since the bottom edge was resting on ground they were firmly frozen on the ice. I tried bashing at it with a hammer and a screw driver but it was no use. I did manage to loosen them enough that I could pull the over off of the top of the tire and lay them on the ground. I started up the RV and moved it a few feet forward (I was amazed that the engine started so easily). Then I managed to hack all the ice away without the tires in the way. The covers are a bit damaged but what can you do.

The next problem was that all the tires seemed to have lost a lot of pressure over the winter. I have not seen this in previous year so I am not sure if the extreme cold had anything to do with it. Each tire was down around 55 psi when then should be at 90 psi. I have a small compressor that I bought for this purpose so on went the generator to power the compressor. It doesn’t have much capacity so it took about 3/4 of an hour to get all six tires back up.

Today I went up and brought the RV down to the house. It looks a bit weird to see in parked next to the snow banks. 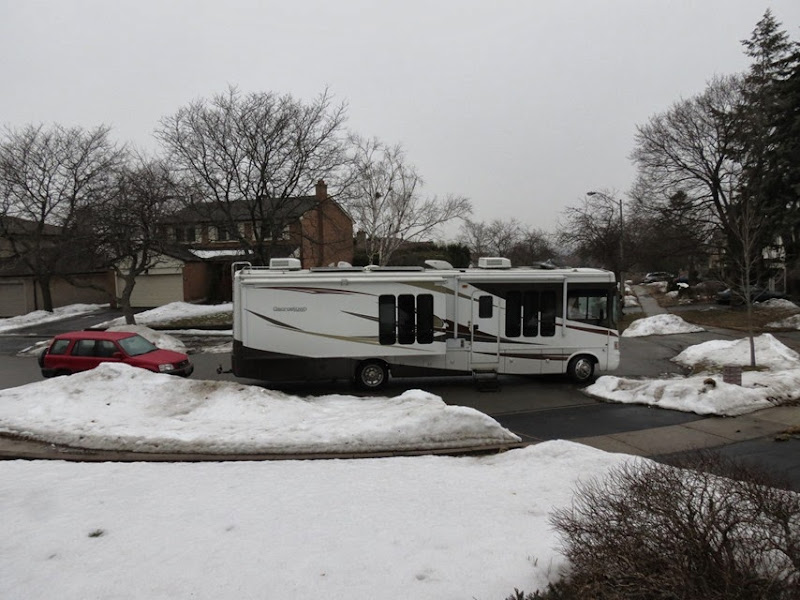 I didn’t want to spend too many days packing because winter parking rules are still in effect in Toronto. There is no parking on the street from 2 am to 6 am and they are pretty strict about ticketing. Each night I will take the RV and park it at the local shopping plaza. I hope I don’t get a ticket there.

Here is our projected route to Utah

It is not the most direct route but that would take us through Denver and the mountain passes around there can still have a lot of snow this time of year. We may change the route depending on the weather as we go.

Also, since there won’t be a lot of campgrounds open we will be staying in Walmart parking lots each night.

I also don’t have a US cell data plan yet so will be relying on whatever free WIFI we can find to keep in touch enroute, although I don’t imagine there will be much interesting happening that is worthy of a blog post.