For those of you getting this by email, the maps I am including don’t seem to show up. Go to the website if you want to see them.

A multi day report because not much happened.

We had another sunny, easy drive to Terre Haute. Wide open spaces and miles and miles of corn fields. Not even worth a picture. It was busier than I thought it would be going through Indianapolis but I forgot it was the weekend.

Another scenic Walmart parking lot. No snow here though. 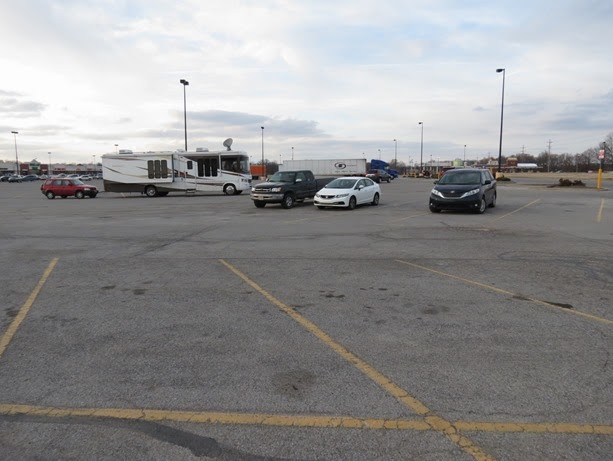 Yesterday our Internet was courtesy the free WIFI from a Lowes store. I had assumed it was the big box store that was nearby but facing away from us. When we left in the morning I realized the Lowes was at least 1/2 km away. This little directional antenna I have for our router is quite amazing. 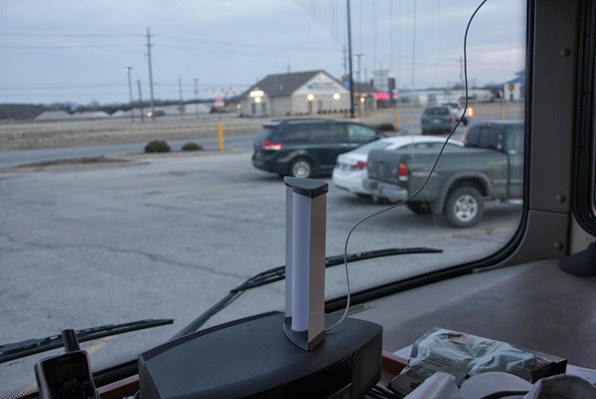 Tonight’s internet was courtesy of a Sonic Drive-In way down at the far end of the parking lot, off in the distance in the picture below. When we got here the temperature was around 10C. The forecast says is supposed to go down to –5C. I hope not.

It was another sunny and cold day. We have had great driving weather at least. Our destination was another Walmart.

This morning our first hiccup happened as we were getting ready to leave the gas station after our morning fill up. The automatic steps into the RV jammed.  As you can see it is quite a distance up inside. 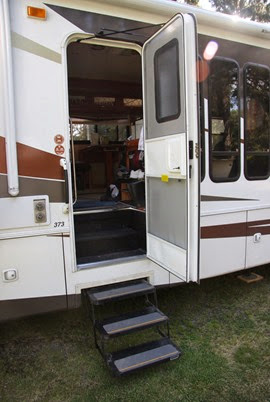 Thankfully they jammed most of the way retracted so we could at least continue on our way and worry about it later. If they had been down we could not move the RV.

I can barely get in without the steps but Jennie cannot at all so this would be a big problem. Once we were parked for the night I followed the trouble shooting guide in the manual but I could not isolate the problem. I guess we are going to have to find a place to get them serviced.

Our second hiccup happened as we tried to go through / around St. Louis. the maps on one of the GPS programs didn’t match reality (that’s my story) so we took a wrong turn and ended up driving along the St. Louis waterfront.

According to the GPS this bridge that we crossed did not exist. 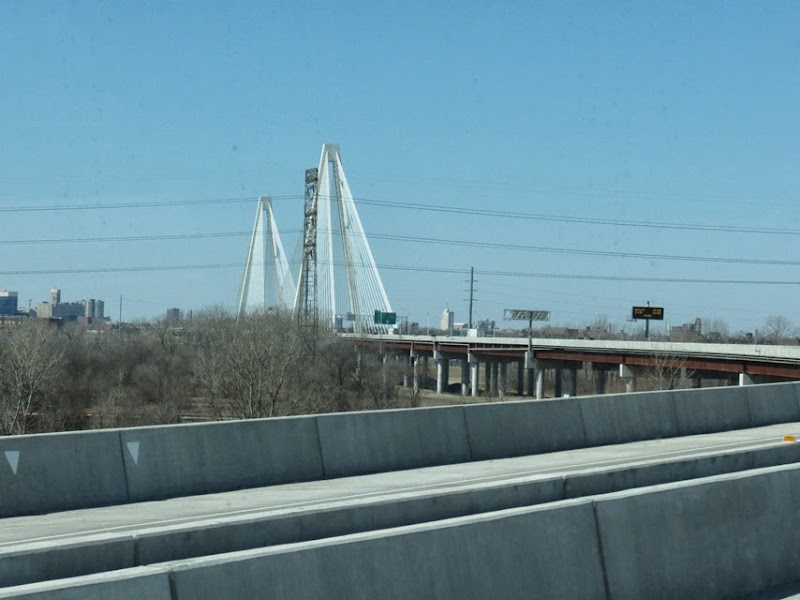 Once we were on the city streets, of course it turned out that the route the GPS wanted us to take to escape was under construction. Needless to say the air got a little blue. 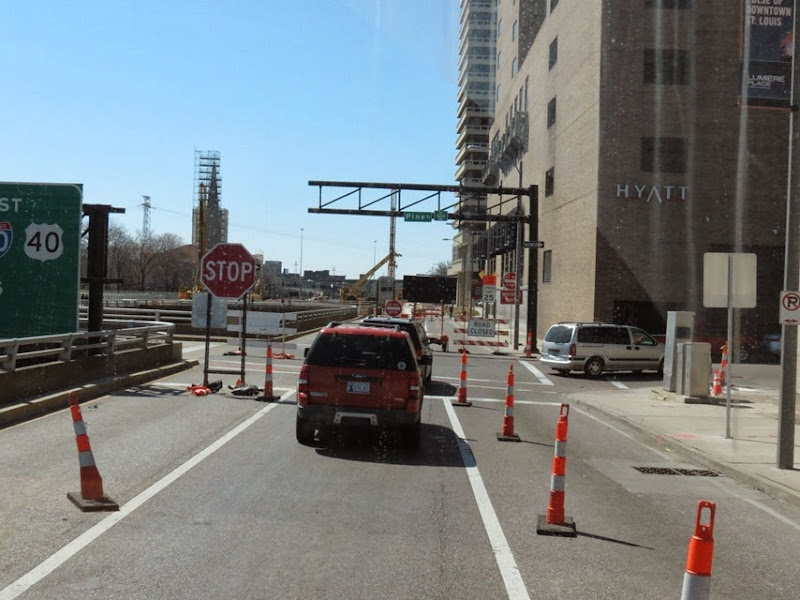 Jennie on the other hand said she rather enjoyed looking at all the old buildings,

We never did get a good picture of the arch.  We got closer than this one but by then it wouldn’t fit. 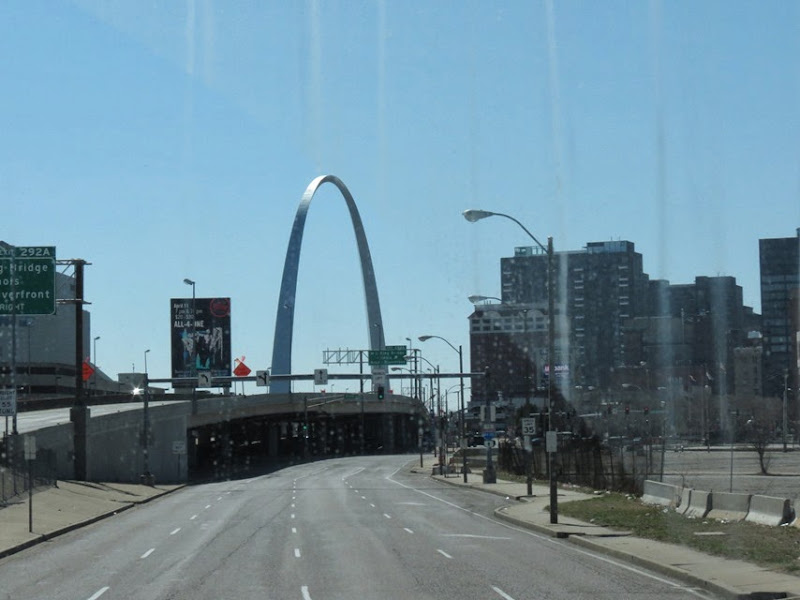 Up to now the roads had been cruise control flat. Now we were in the Ozark Mountains. There we nothing very big but we were constantly going up and down. Everything is still kind of brown so it was not terribly pretty either.

Also up to now we have hardly seen any other crazy RVer’s braving the freeing temps. Today we saw a whole string of them heading east. I can’t imagine where they could be headed.

Since the forecast for tonight is again calling for freezing temperatures we cannot use the RV’s water system. Up to now we have been relying in a 5 gallon jug of water than we keep inside the cabin.

No internet here to leach off of either.

It was a cold night. When we got up in  the morning is was 3C inside the RV. To top it off sometime during the night the battery in the smoke detector decided to die so it started chirping, meaning I had to get up to remove it.

We fill up the gas tank once a day usually in the morning as we leave. We use about 1/2 a tank each day and the fill ups cost around $150 US. Today was the cheapest gas yet at US $3.21 a gallon which works out to around Cdn $0.90 a litre.

Our weather luck is holding up. It was a another sunny clear day.

More hilly country in the morning. 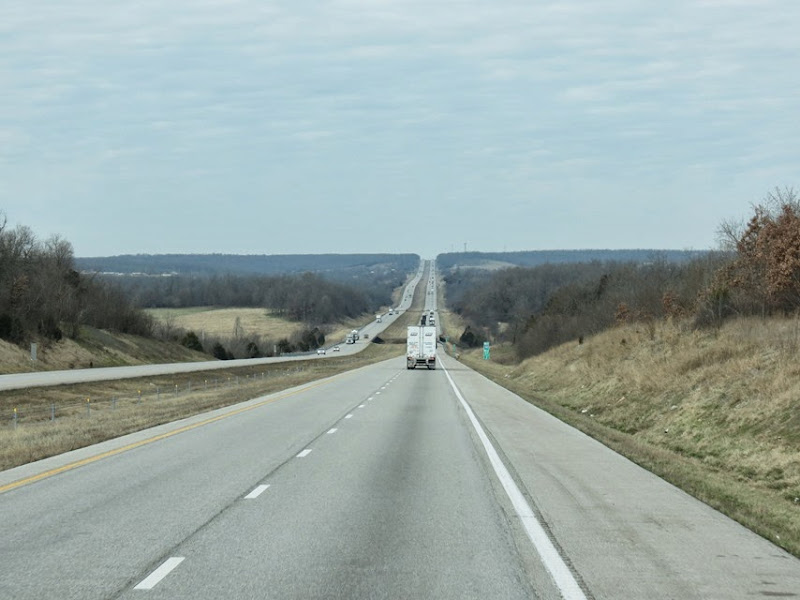 Once we got past Oklahoma City we were into the big skies of cattle country. 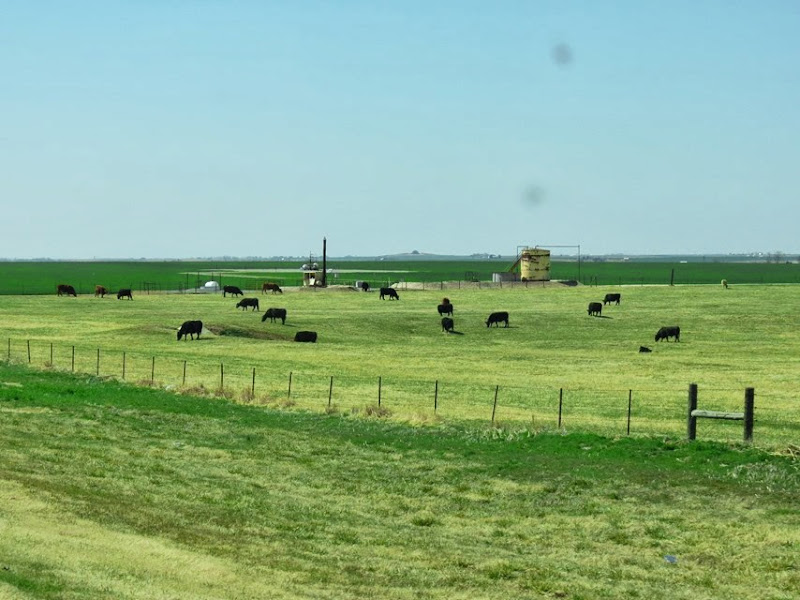 One thing that surprised us was how red the earth is, much like that in PEI. 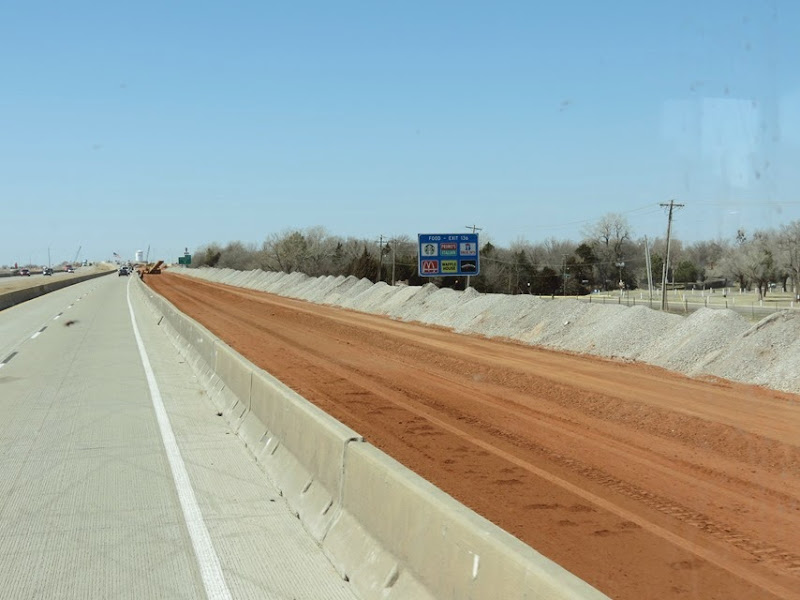 Another was that they must get a lot of brush fires here. There were signs all along the highway saying “Do Not Drive Into Smoke” 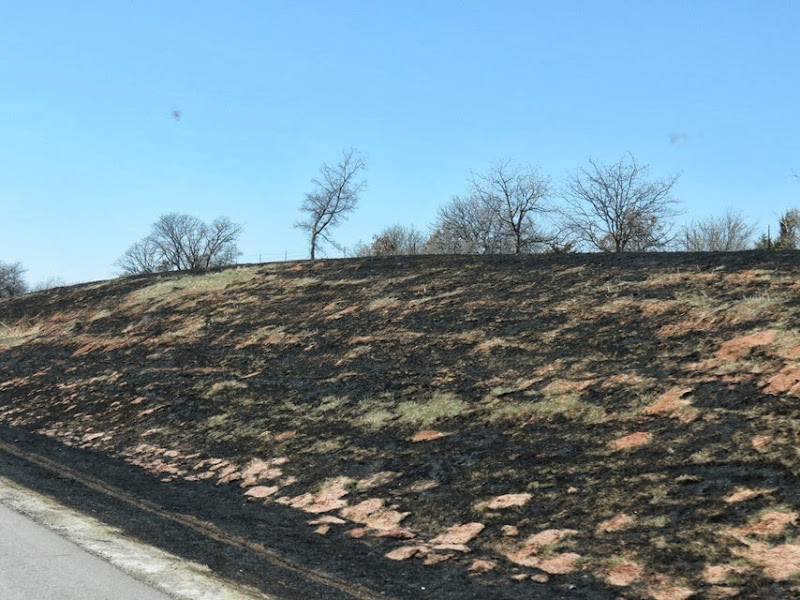 Oklahoma really likes their toll roads. Interstate 44 is a toll road the whole way. The section from the border to Tulsa cost us $9.95. From Tulsa to Oklahoma City again cost is $9.95 and to just go around Oklahoma City cost us $5.15. There were also no rest stops or places to pull over for lunch. You could exit the turnpike at the towns along the way but that meant going through a booth on the way out to get a refund of your unused toll and then going through another booth to get back on. We ended up just pulling over to the roadside at one of the toll booths because it was nice and wide and everybody was going slow anyway.

And we are at yet another Walmart Weatherford, Oklahoma. It is VERY windy here and we are quite exposed. I don’t even want to put the satellite dish up for fear it would get blown off. No internet, here again.

One good thing is that the temperature is supposed to stay above zero, not by much, but I have decided to chance it and start using the RV water system. It is nice to have taps again.

I was also very proud of myself tonight. I managed to fix the RV steps. I took the motor and drive assembly completely apart. A post that the one of the gears sat on had a rough spot that caused it to bind. A bit of filing and it works as good as new. I even managed to put it all back together properly. Kudos to the manufacturer for building it so that it could be taken apart. No rivets or welds. All screws and bolts. What a relief!