Lying in bed this morning I heard a loud bang from the roof of the RV. I ran outside to find that a 6 foot long, 4 inch thick piece of dead branch and fallen from a tree above the RV. Surprisingly there was no wind to cause it to happen. Thankfully It just grazed the side and didn’t do any damage. It would have hurt someone very badly if it had fallen on them. I told the rangers about it because there is still more of the dead limb up there but I haven’t seen any action yet.

We stayed local today and did a few of the trails inside the state park. We first walked from the campground to do the short loop called the flytrap trail. Then we did a longer loop to the Sugarloaf Dune to have lunch before heading back. 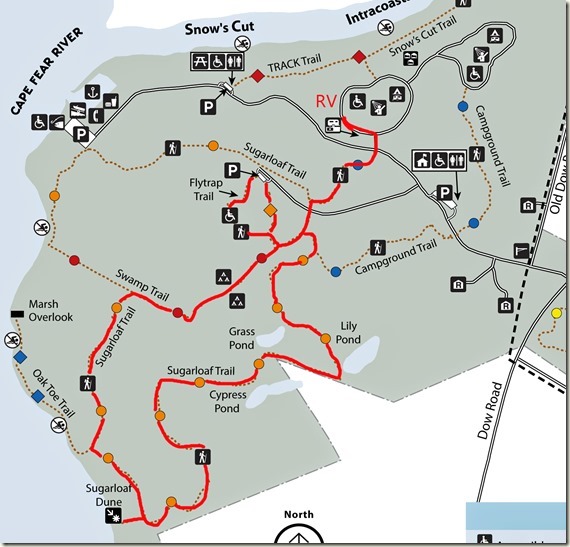 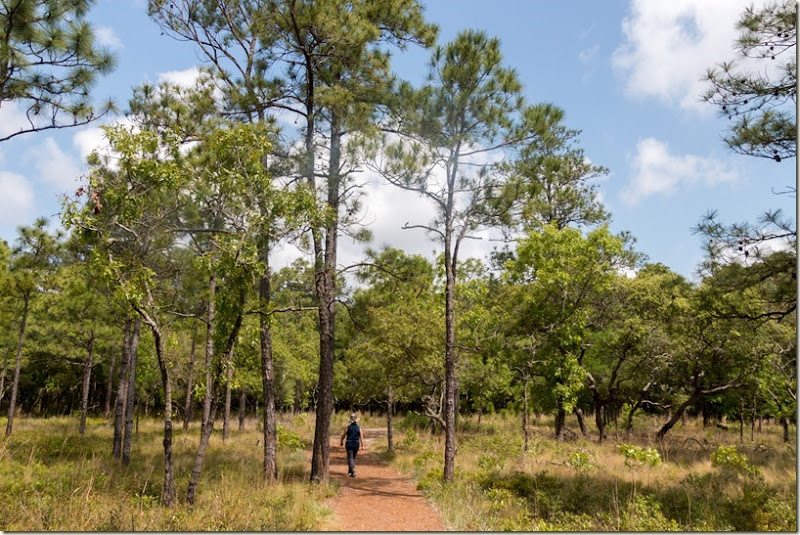 A few flower pictures to start.  The Spiderwort, or Widow’s Tears. 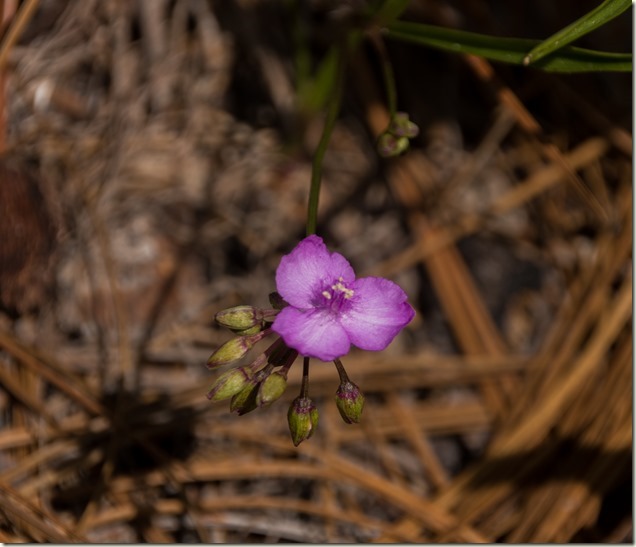 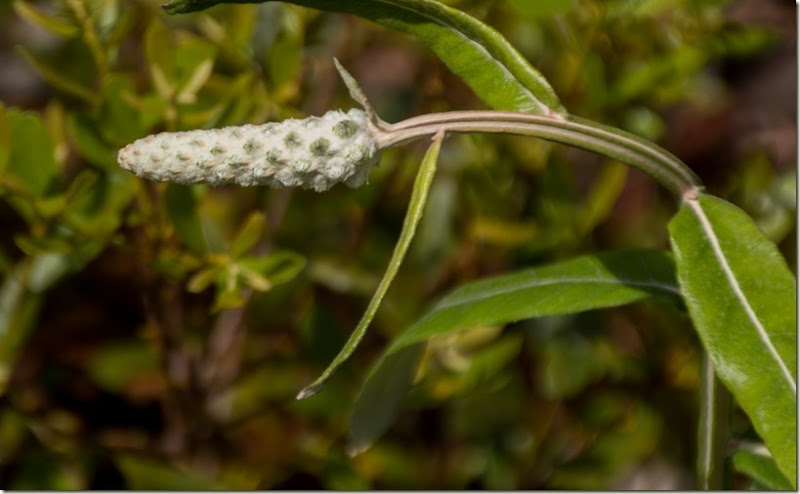 They grow some seriously large pine cones around here. 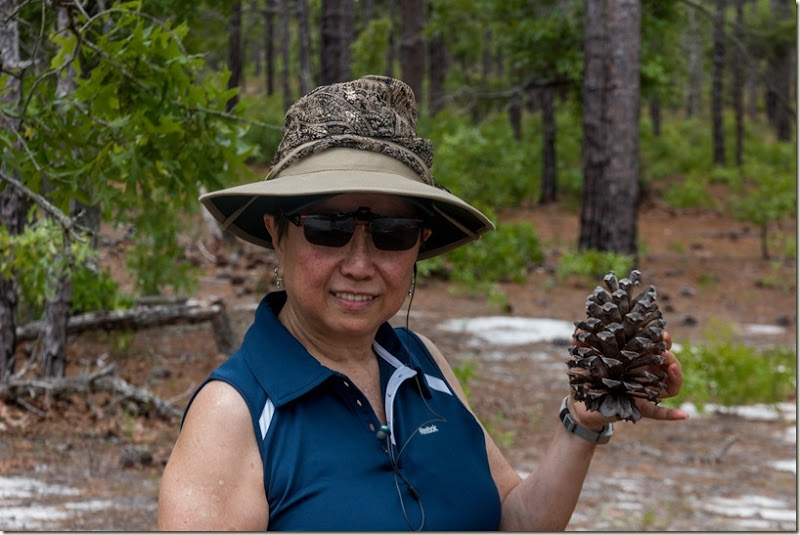 We did not expect to see Eastern Prickly Pear cactus. 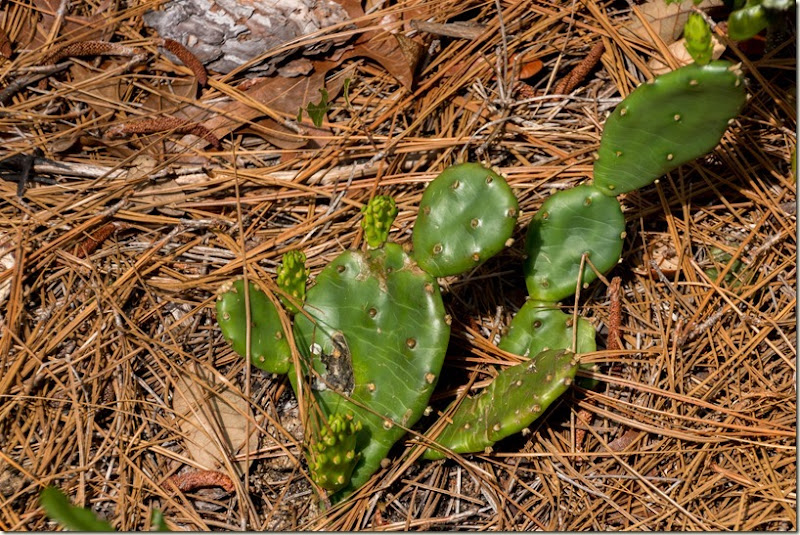 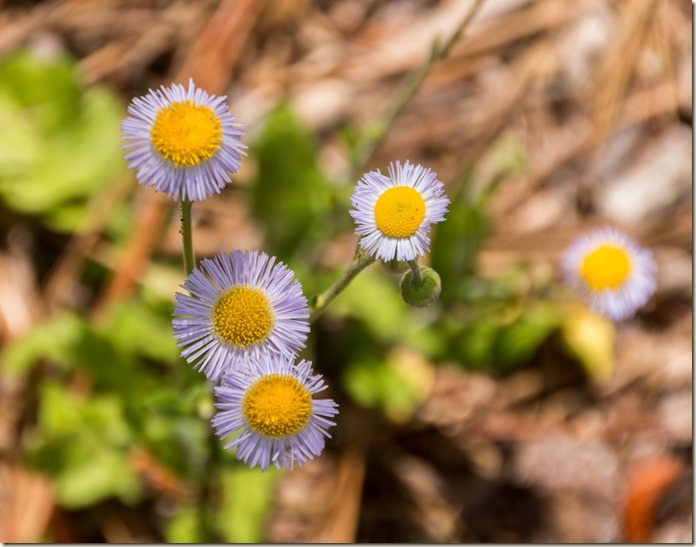 You are supposed to be able to see some carnivorous plants such as Pitcher plants, Sundews and Venus Flytraps on the Flytrap Trail. We walked around it once and did not see any of them.

As we were about to head to the second loop we saw a ranger talking to a group of people. We joined them and sure enough he was giving a tour. It turns out that the plants are all on unmarked side trails, for some unknown reason.

First the pitcher plant. We only saw this one clump. 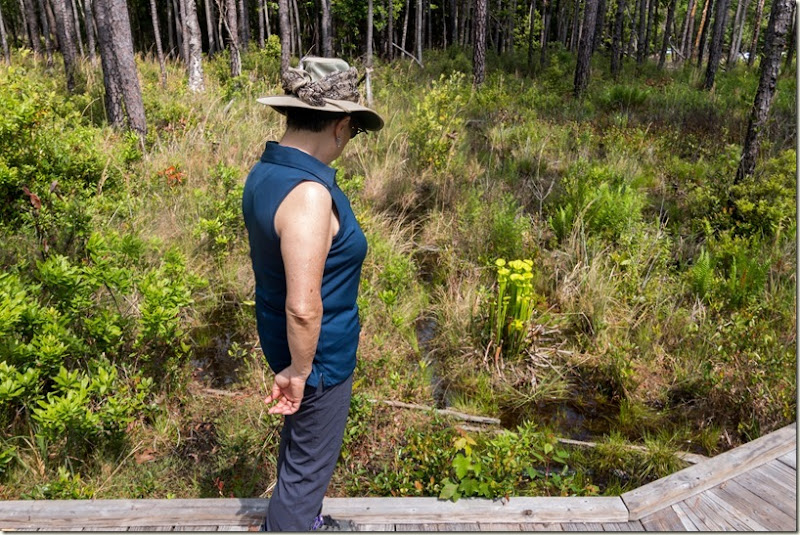 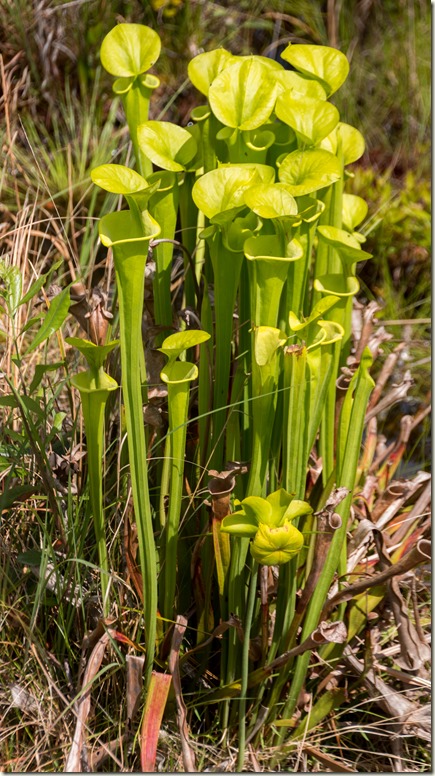 Then to the Venus Flytraps. The area in about a 70 mile radius circle around here is the only place in the world where they are native. In every other place people have grown them, they taken them from here, usually illegally.

Everyone thinks are large because of the movie A Little Shop of Horrors but they are tiny. Can you see them inside the red circles. 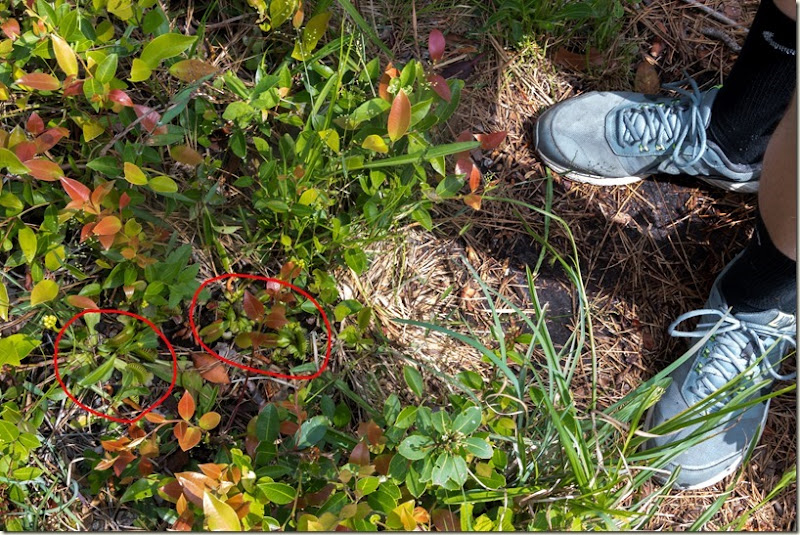 There are three hairs inside the trap. If two of them move then the trap will close. The ranger said that each trap will only close 3 times before it dies so you should never touch them. 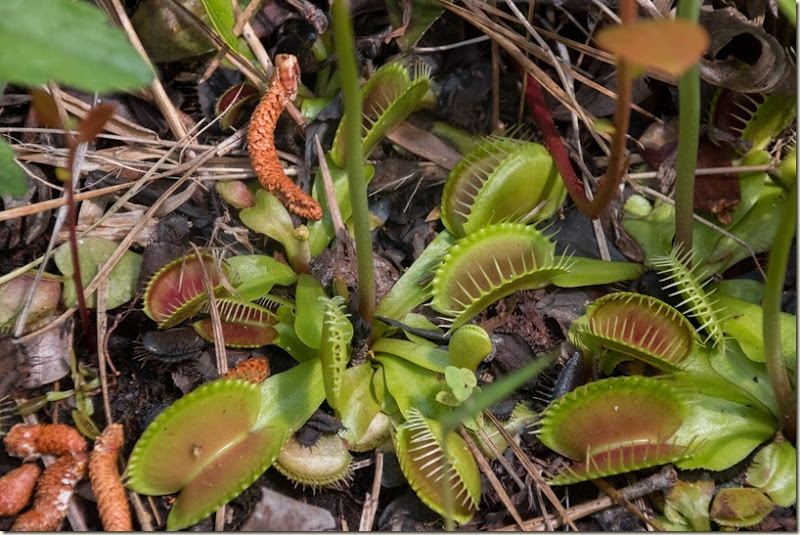 This one was even tinier. 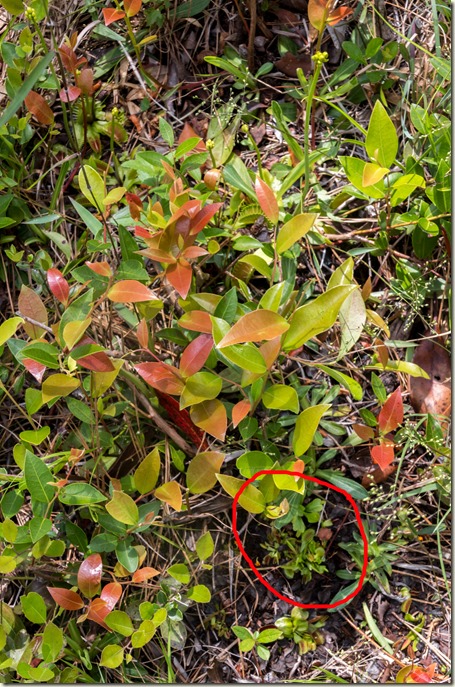 You can see all the dead traps on the ground. 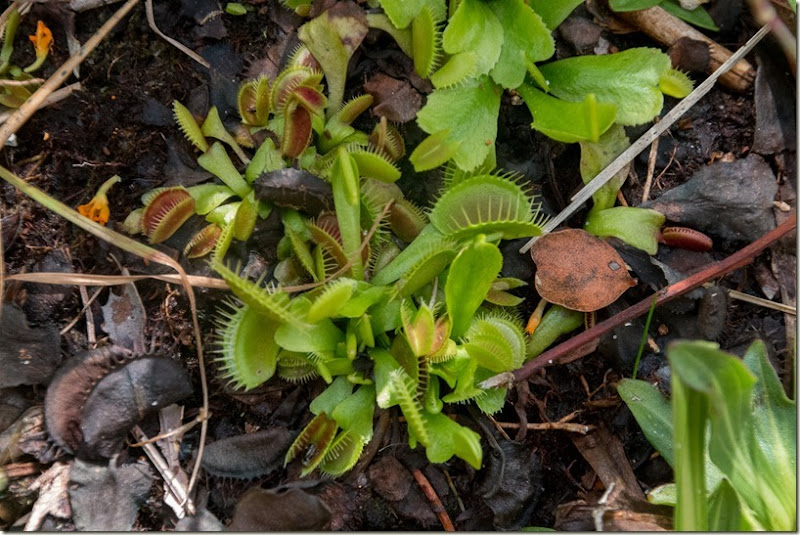 This one had a bunch of insect digestion in progress. 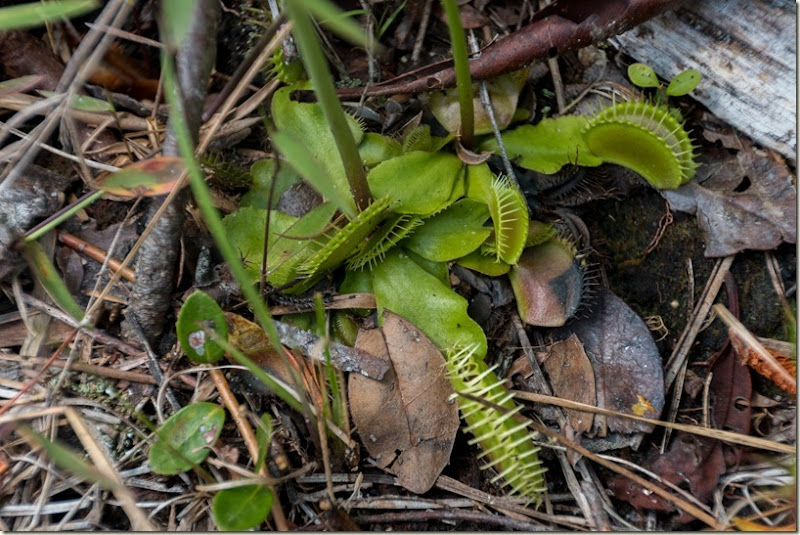 Most of the area is very sandy but there is some swampy sections. The flytraps like to grow in between the two areas to get just the right amount of moisture.

The ranger said there are lots of snakes and turtles here but we didn’t see any. 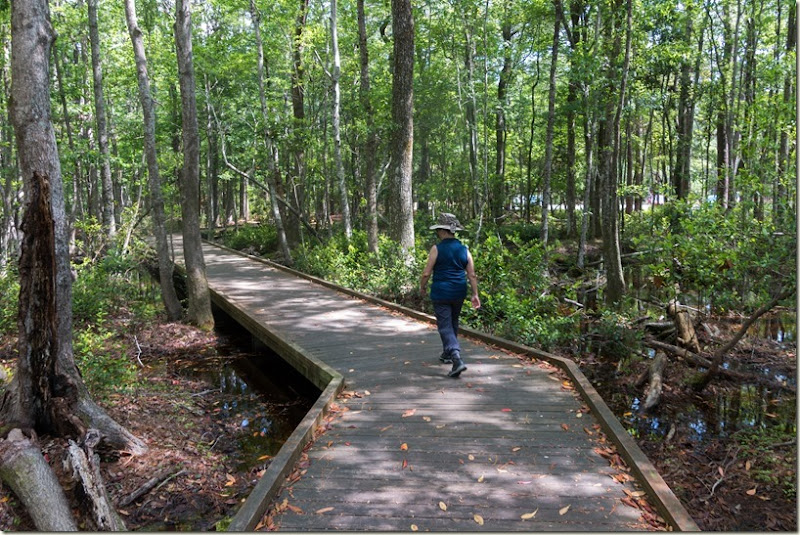 They start out looking like tufts of long grass, like the bunch on the right, then sprout up with pom poms on the end of a spindly trunk. eventually they grown into full sized, somewhat normal looking, trees. 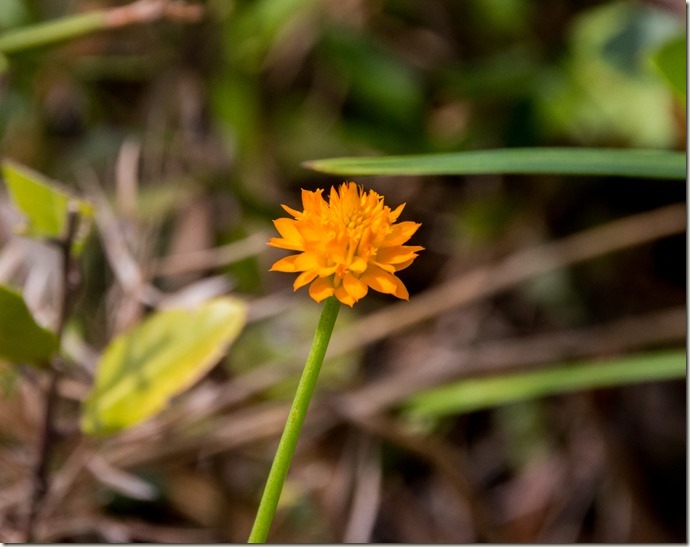 The lower loop was open, sandy and very hot. We were tempted to turn back a few times. 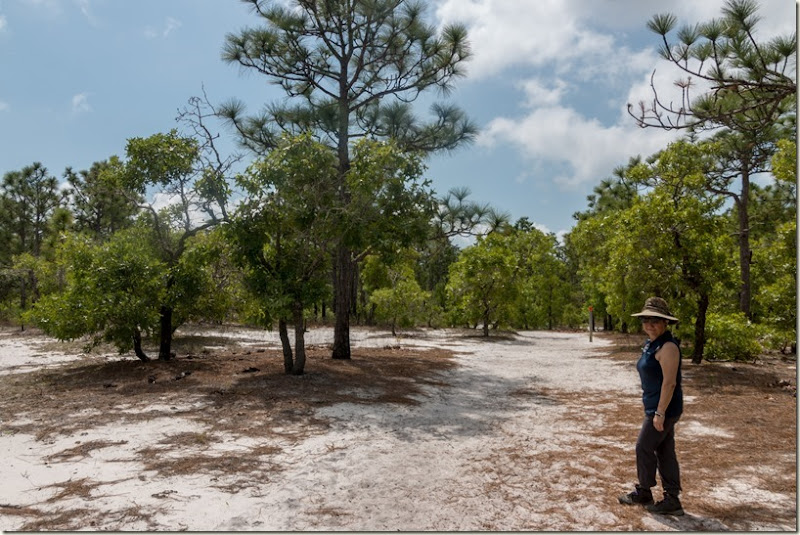 We passed by three ponds. I only took a picture of Lily Pond. 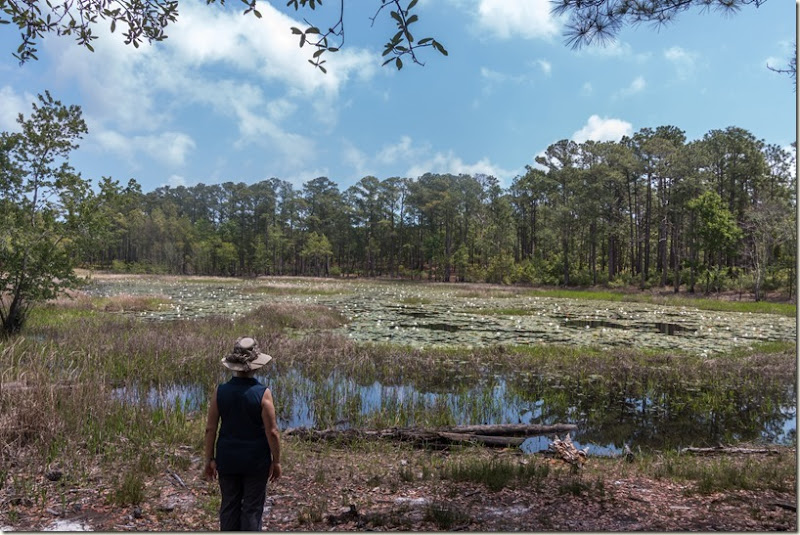 We finally made it to Sugarloaf Dune to lookout over the Cape Fear River. 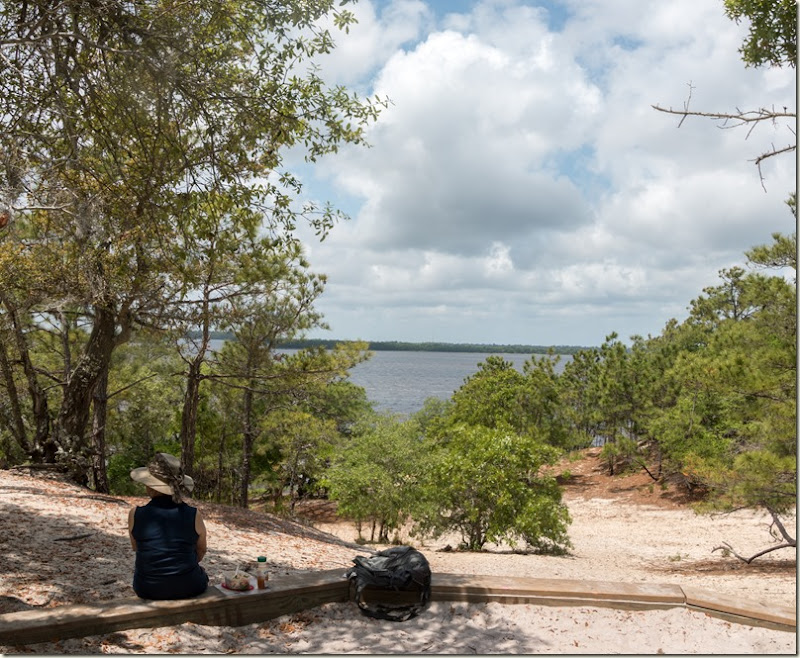 It was a steep climb down to the river and we didn’t relish the thought of the hot climb back up so we had lunch up here. After lunch we decided that we couldn’t come this close and not go down. 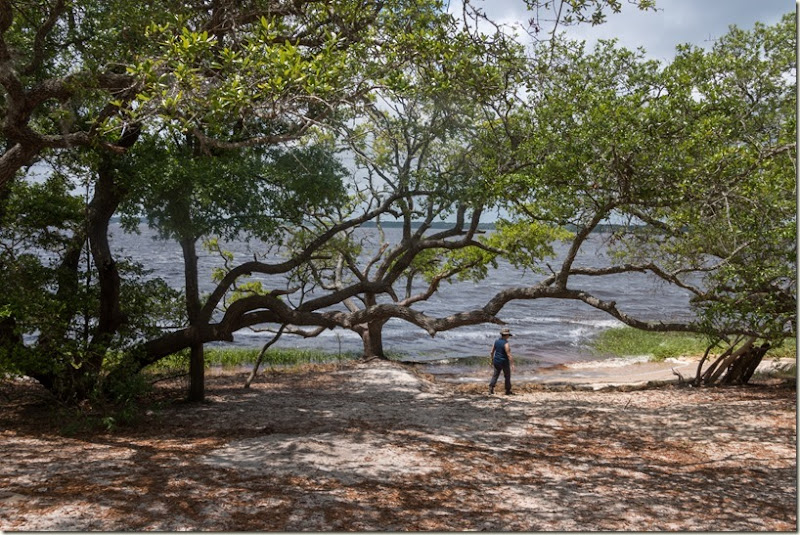 We should have had lunch here. There was a strong breeze and it was much cooler. 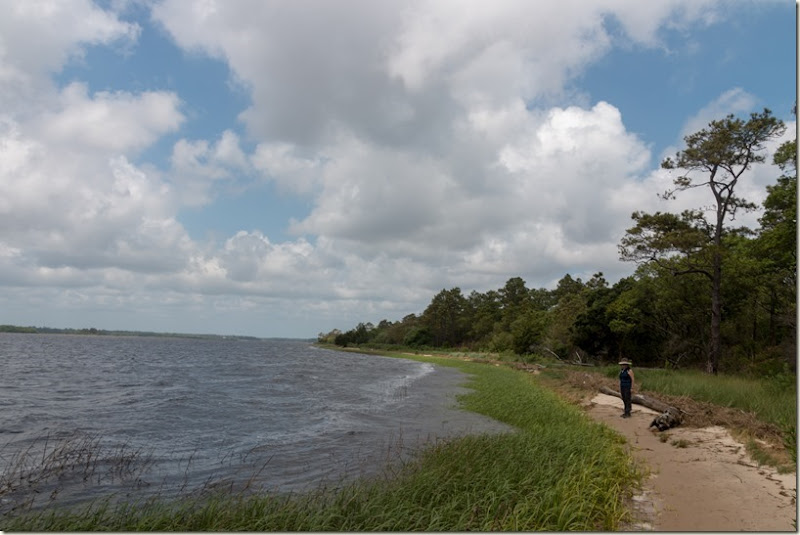 Up at the lookout we had heard some clanging noises. Once we got down we saw this old barge. 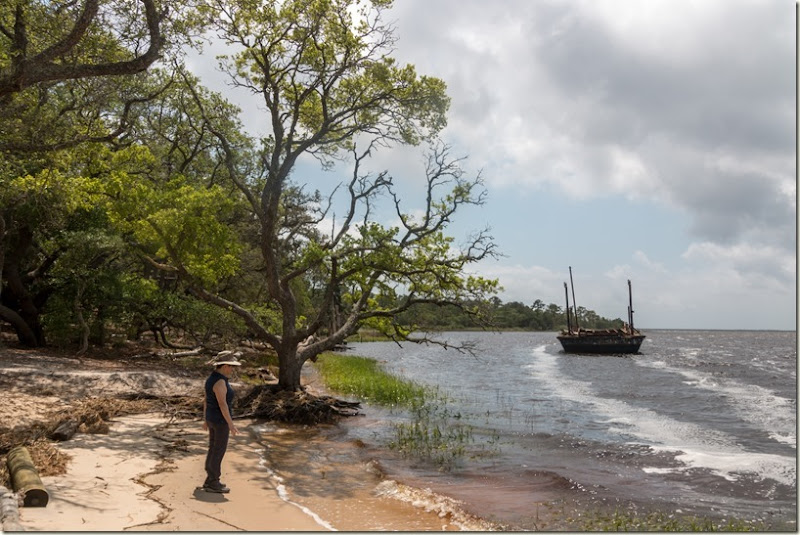 It must still be in use because there was a new looking pressure treated pole on it. 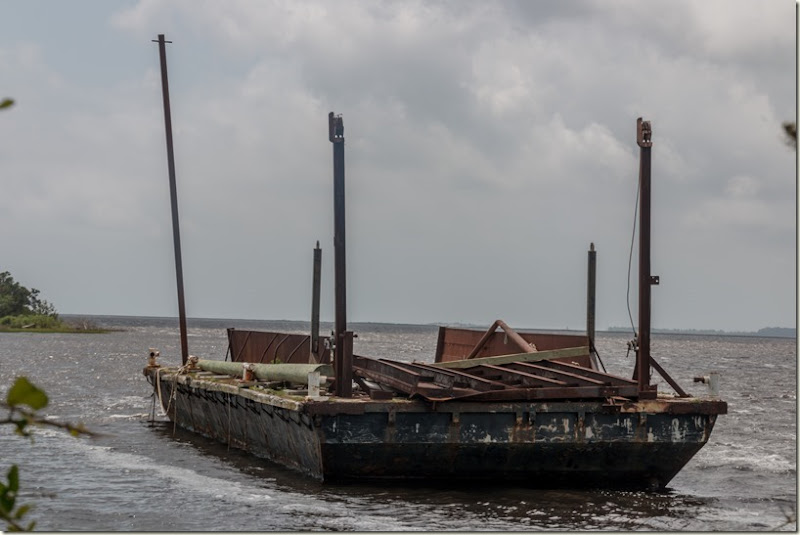 Jennie saw a shell she just had to have. 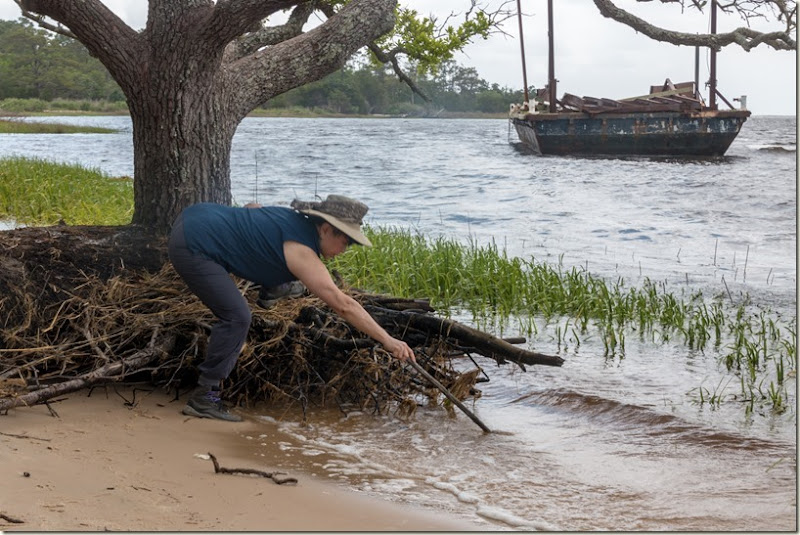 After a while we headed back up the dune. You can see the lookout on the right. 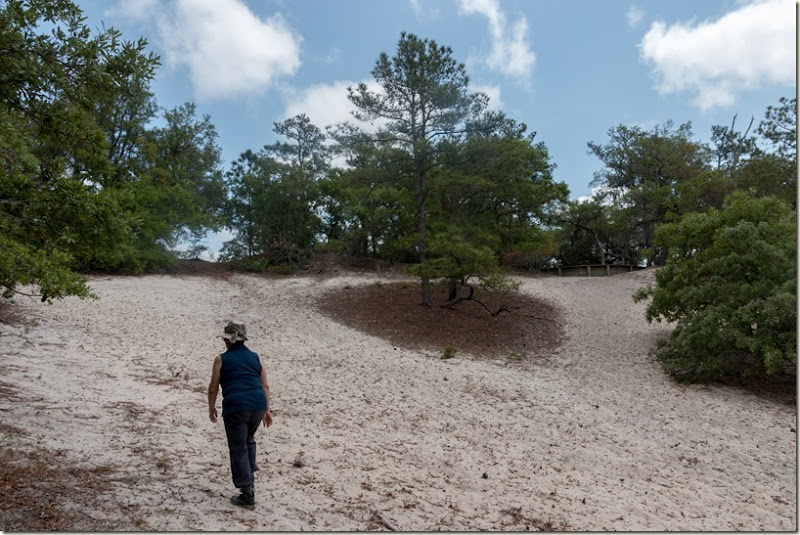 Part way up we saw a side trail that took us to this swing that I just had to try. Jennie declined. 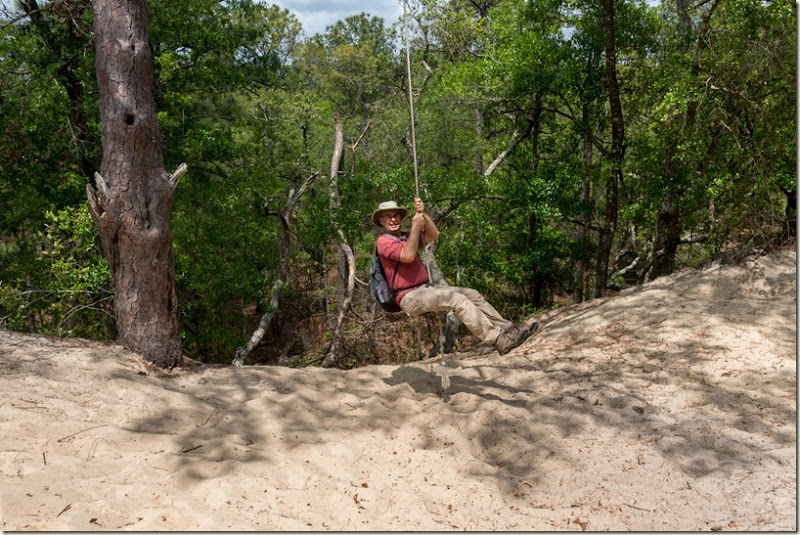 I took a run at it and then jumped on to swing out over the edge. 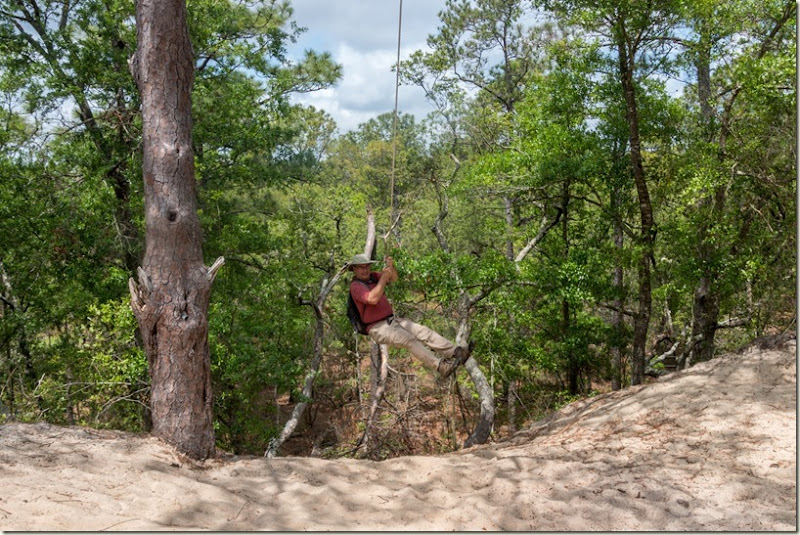 And then the seemingly endless long, hot trek back to the RV. 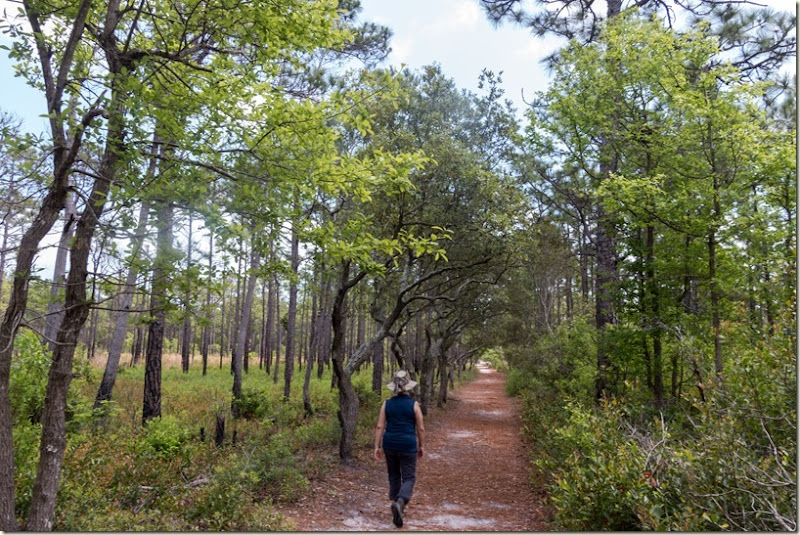 Altogether we did about 7.5 km which was a bit too long in this heat and our being out of hiking practise.