We were going to just take yesterday off after a late night at the wedding and drive to Niagara today but then Jennie found out that her favourite little person, her nephew’s son, would be back in town that night. They live in Oakville and she was going to drive over for a visit and then drive home.

Bronte Creek Provincial Park just happens to be a few minutes from their house so I figured we might as well just move the motorhome there for the night since it is on our route to Niagara. We decided to do the move at about 4 pm and were packed up and on the road a little after 4:30.

We pulled into the campground at about 5:15 and there was nobody in the gatehouse but a security guard. He said to just pick a campsite and to come and pay in the morning. The campground was really empty. I could see why the parks people had left. In the loop we were on there were about 40 sites of which 5 were occupied.

The section for big RV’s was just an open field with nice big sites. This is actually the first place we came to when we got the RV to have a short try out trip before we headed to Newfoundland. Back then it there was nothing taller than grass. Now it is covered in tall thistles and goldenrod. 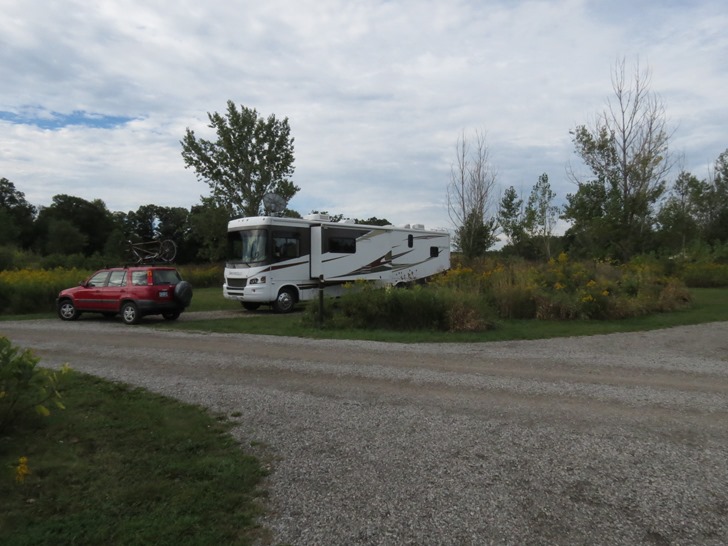 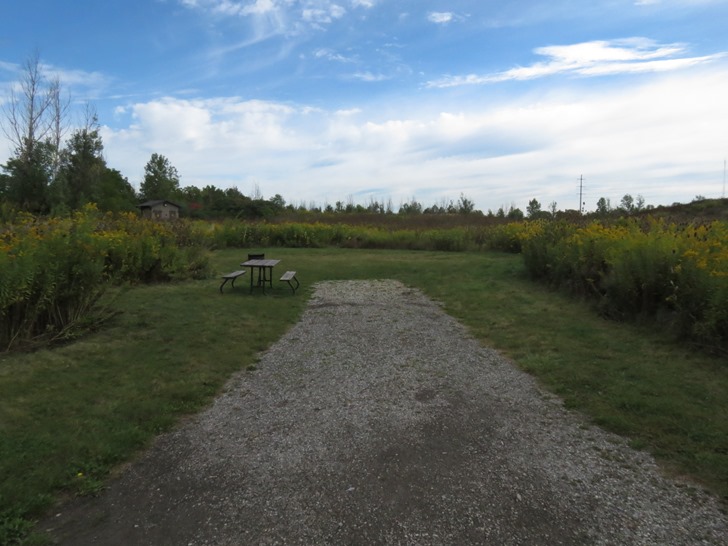 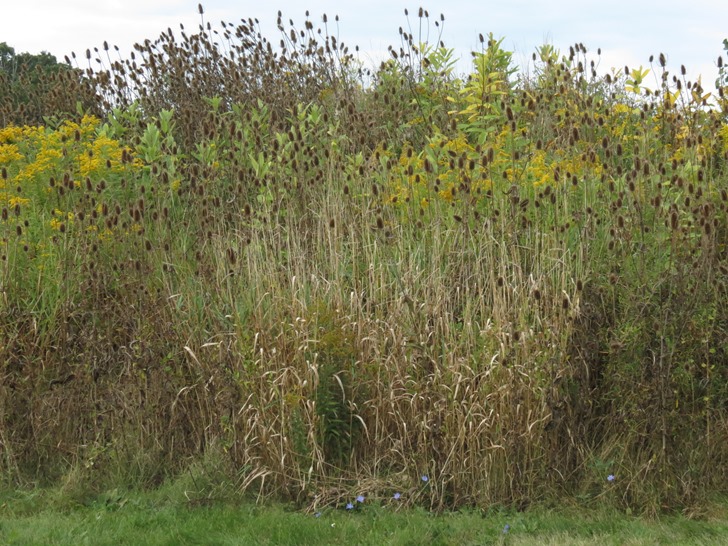 There would be no bushwhacking through the fields here. Established and mowed paths only. 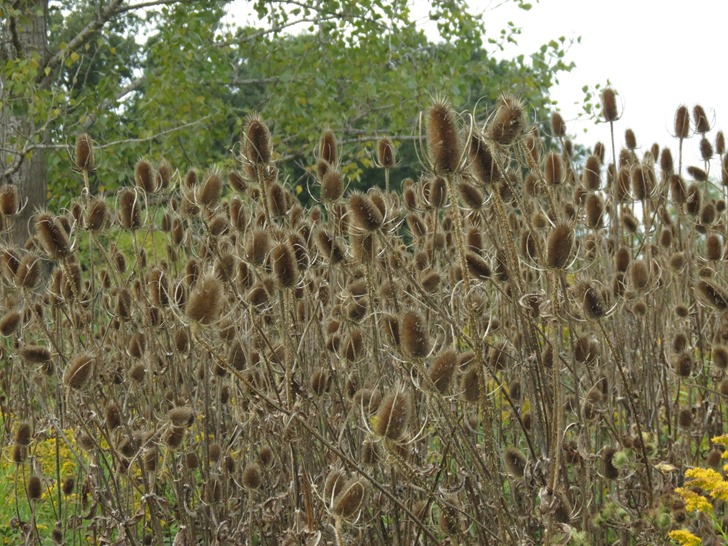 We got set up and headed over for our visit. We ordered in pizza and Jennie got her kid fix. At their bed time we headed back to the RV.

This morning I was tempted to just drive out but my conscience got the better of me and I went to the gatehouse to pay. By now it was around 10:30 and there was still no one there so we got a guilt free, free night of camping.

Onwards to Niagara taking the bridge over the Welland Canal. There was not very much traffic so it was an easy trip. 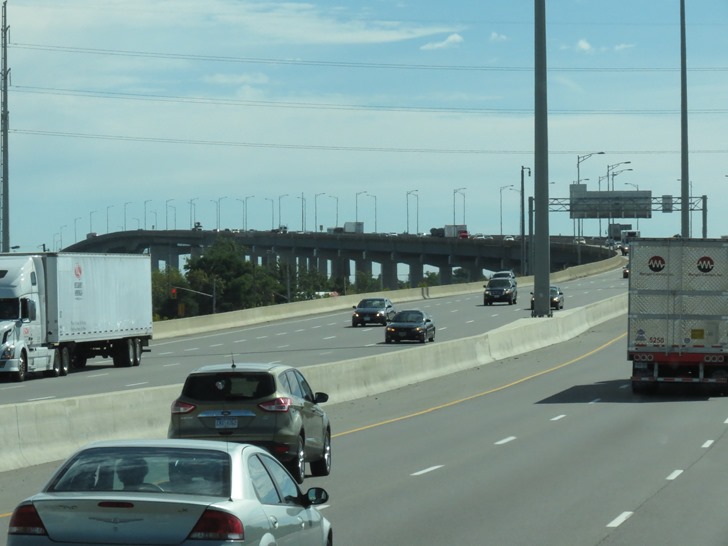 Our new home for at least 4 nights is a small campground behind a motel right on the Niagara Parkway. I can see the river from my window. 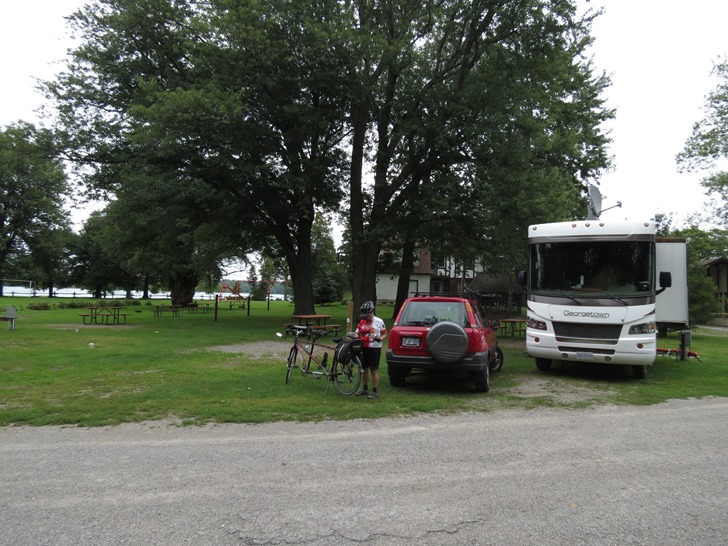 It sure is a good thing I reserved a site. The lady must have laughed when I did. The only other vehicles here are those left on the seasonal sites, of which only two have people at them today. 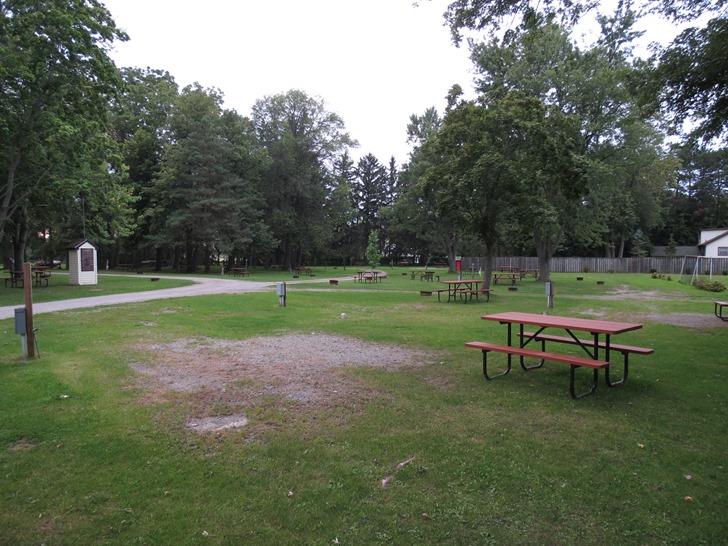 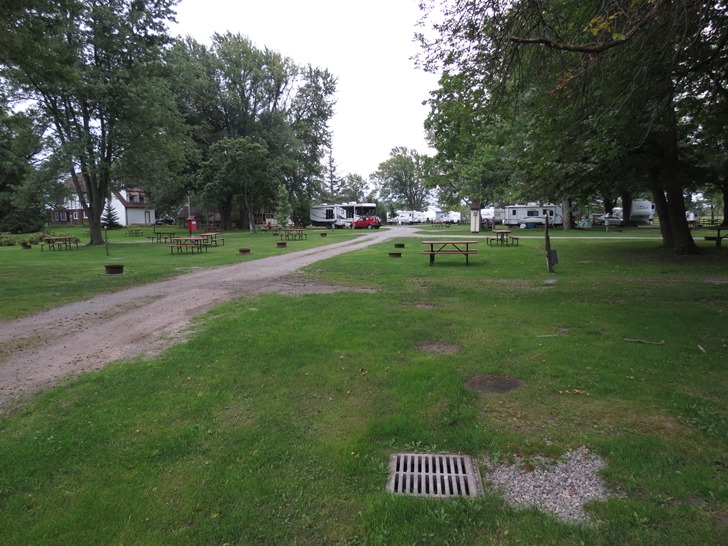 It looks like a great little place. They have a playground, pool, mini putt and a soccer field. 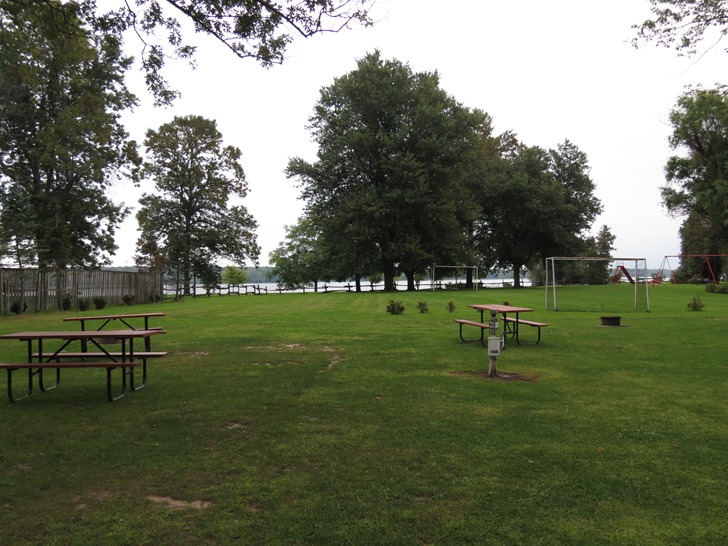 They even have one of these ancient pieces of equipment. 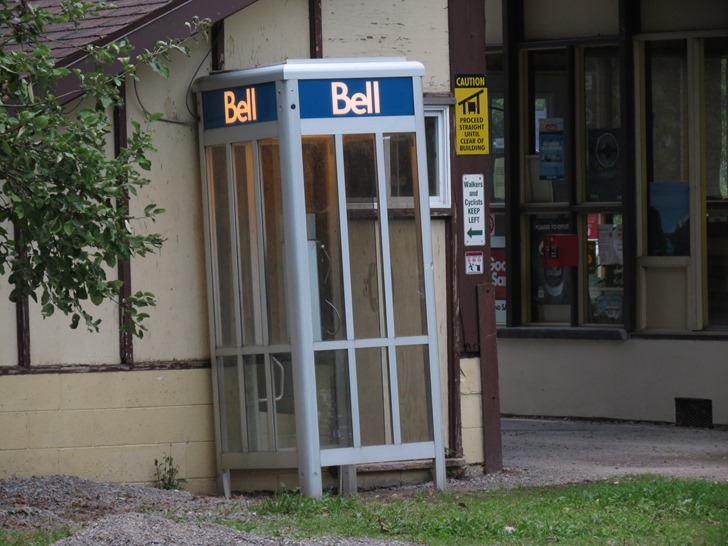 It is also our first full hookup site in a very long time. Unlimited showers in the RV. Yay! Also, for the last 3 weeks we have been at our or our friend’s houses and our only power has been from plugging into a regular household 15 amp outlet. Powering the entire RV this way has been a bit of a juggling match, always trying to figure what we have to turn off to, say, use the microwave.

But free camping is good. This is the first night of camping we have had to pay for since we left the Gaspe, a month and a half ago.

The internet however is lousy. It isn’t much better than dialup. We have reverted to using our Bell broadband stick.

We were setup and had lunch by 1 pm. We decided to do a bike ride on the Niagara Parkway bike path which crosses the end of the driveway. It goes from Niagara-on-the-Lake to Fort Erie and is part of the Waterfront Trail.

We did the 35 km round trip from the campground down to Fort Erie and back. 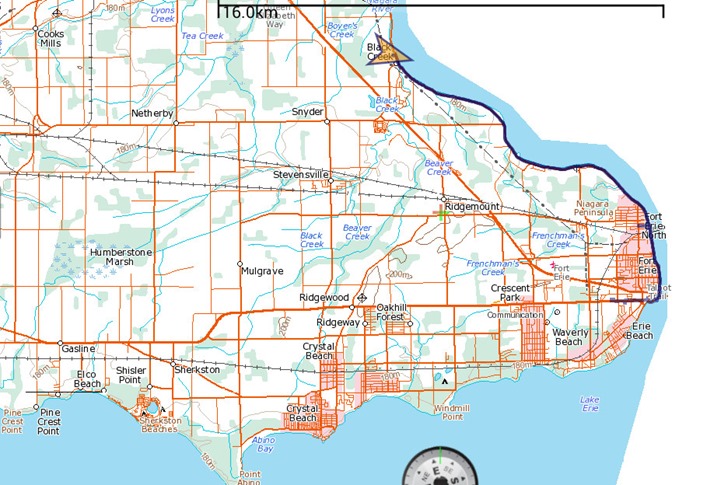 There is a dedicated bike path beside the road but there was so little traffic, maybe one car every 3 or 4 minutes, that we just stayed on the much smoother road. 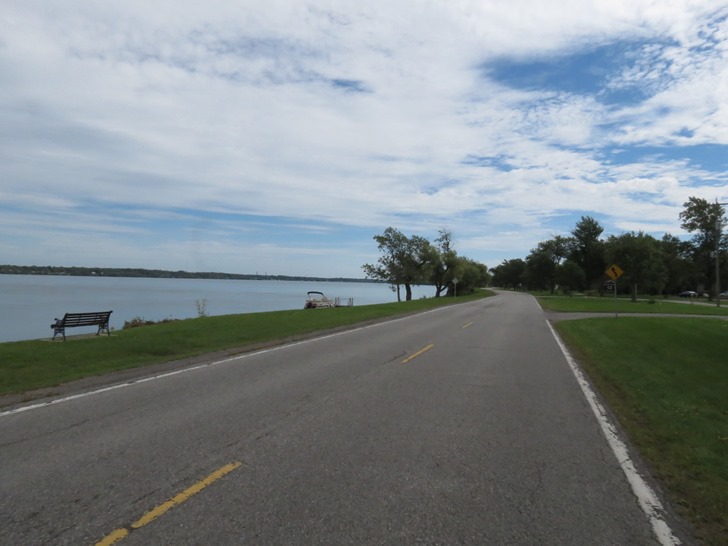 There is not a huge amount to see on this section. The Parkway is lined with homes, some small and some very large, that are set back on service roads from the main road. 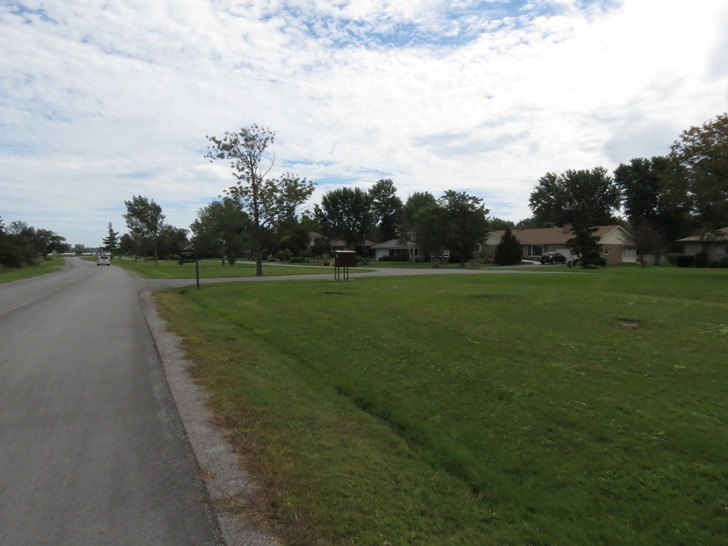 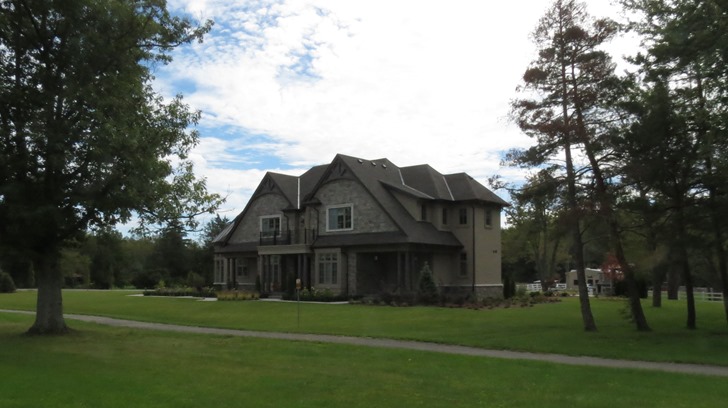 A lot of people have docks and boats just across the Parkway on the river side. 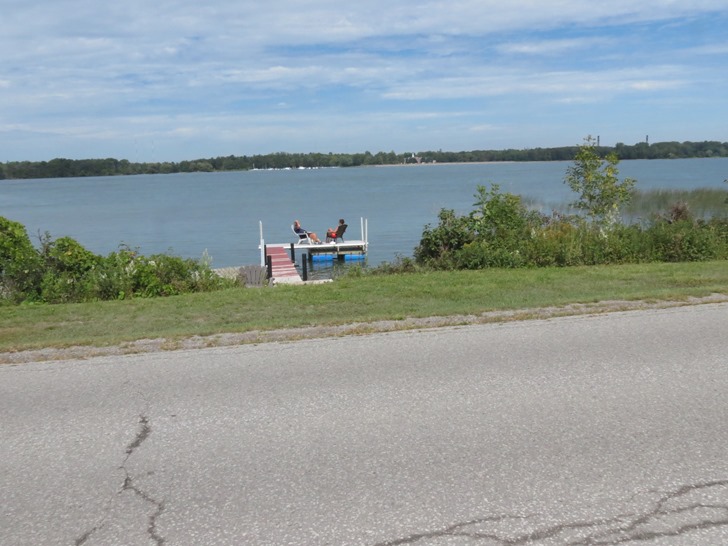 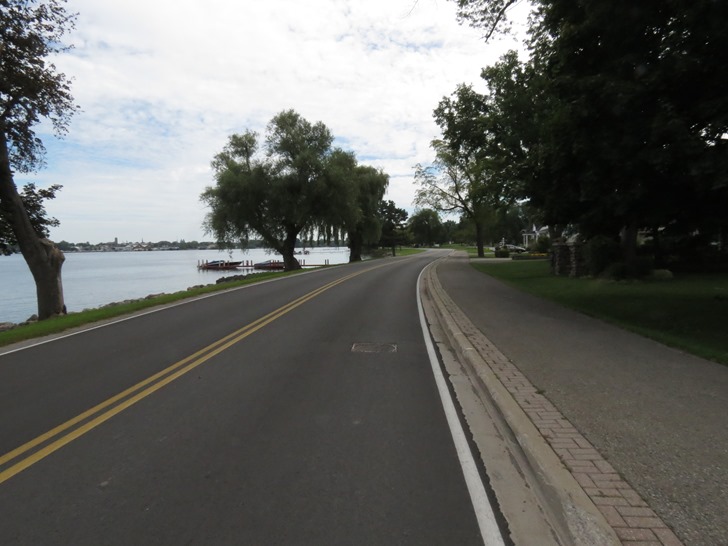 The RV at about 3.8 meters high would not have fit under this railway bridge. 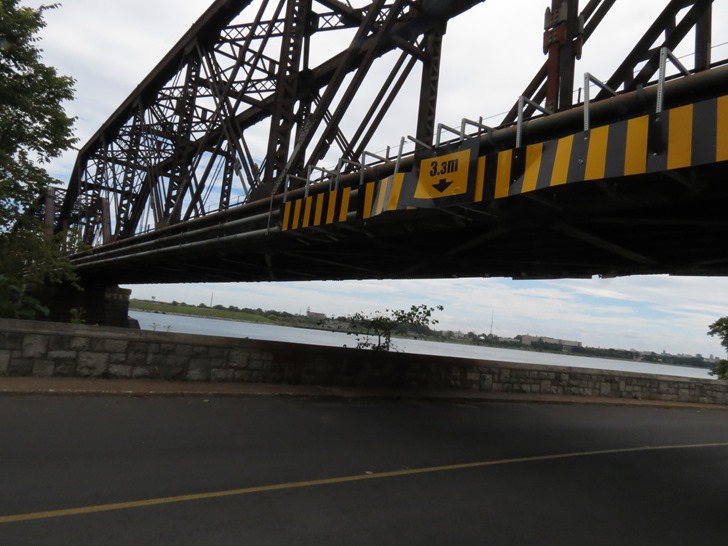 We passed under the Peace bridge to Buffalo. These pictures were taken heading back. 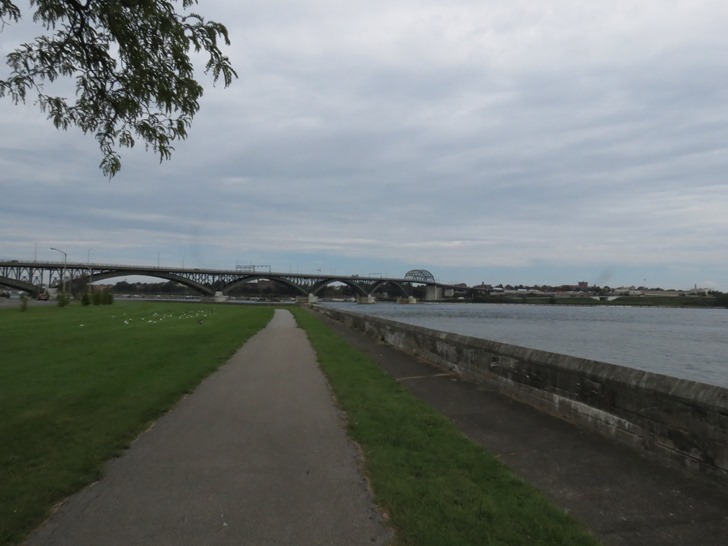 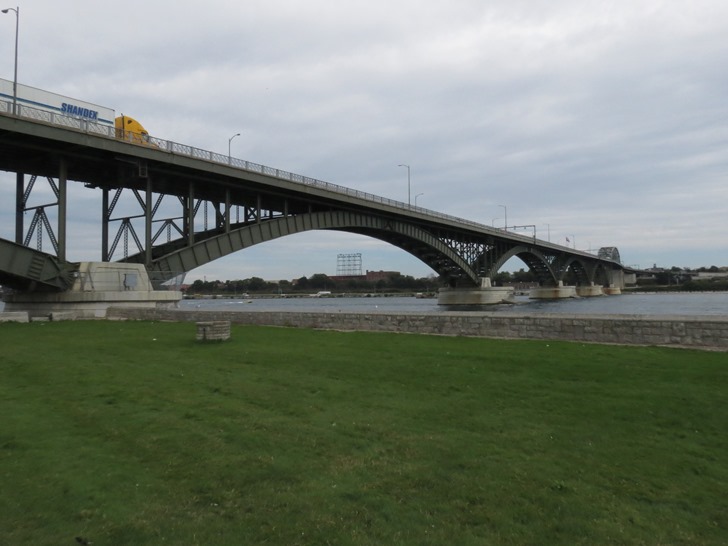 Fort Erie, along the waterfront, was kind of depressing with lots of abandoned building and other somewhat seedy businesses. 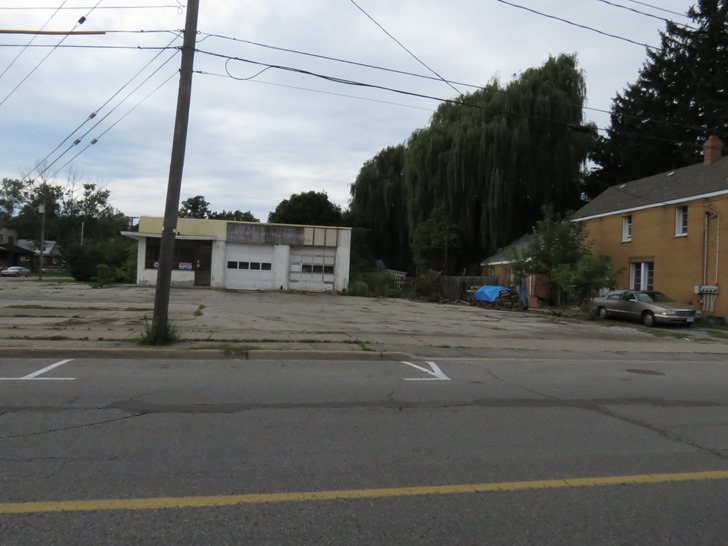 Away from the water we found a shopping area. We hit an ATM , Shoppers and Canadian Tire. 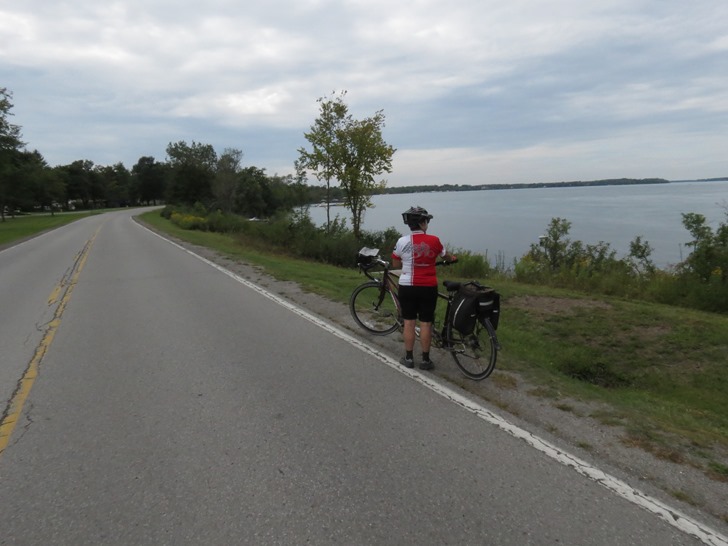 It is supposed to be a scorcher tomorrow. We will probably head up near the Falls.