No internet for 3 days so these are delayed.

It was a nice day for a drive as we headed south. Just outside of Fairbanks we climbed and climbed to the top of a ridge that gave us some more long distance views. 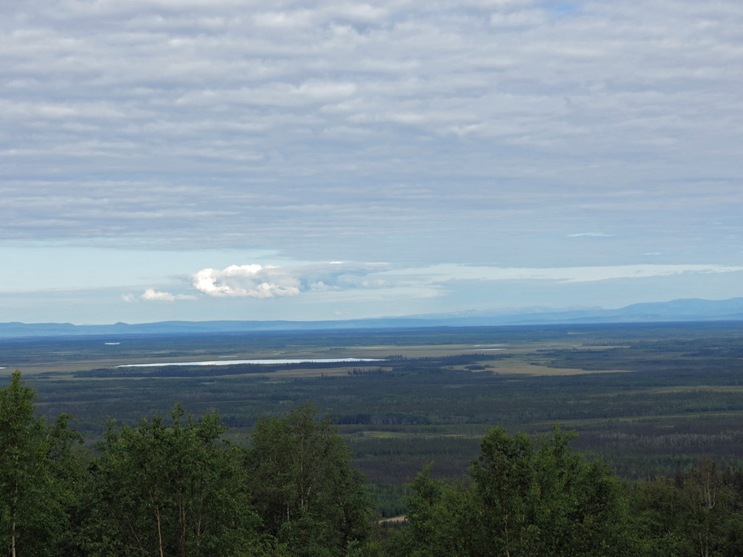 The guide books said you might be able to Mt McKinley / Denali from here but there were just too many clouds on the horizon. The highway went up and down for a while and then we went across a long flat plain as we approached the mountains. 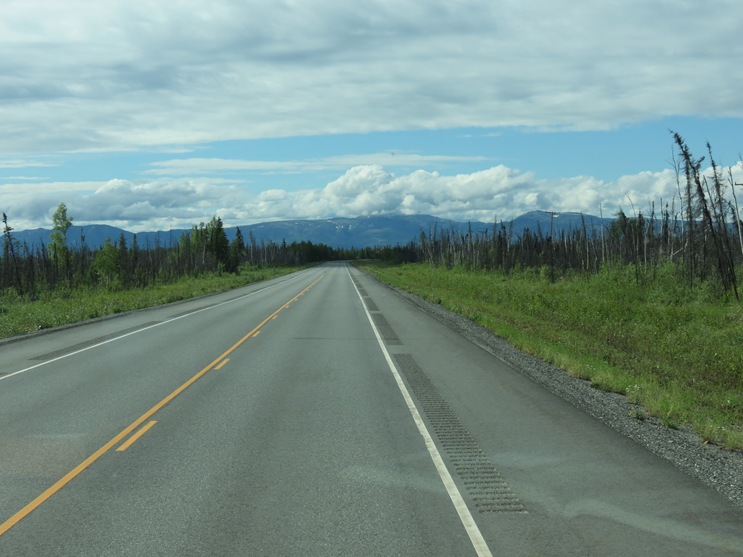 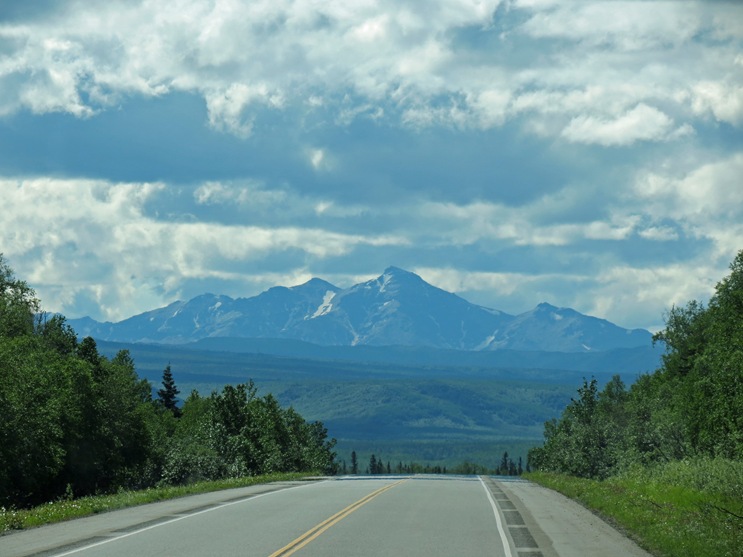 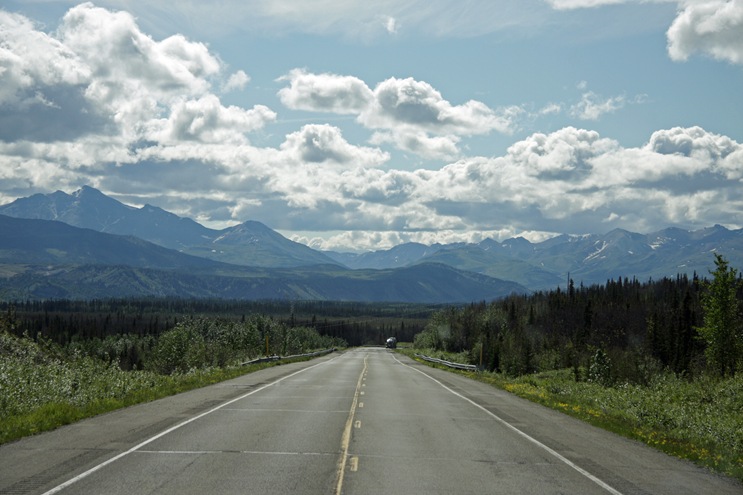 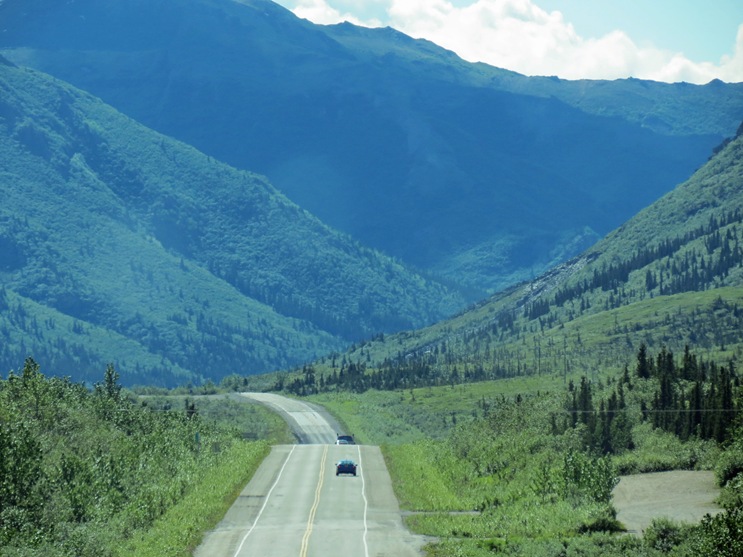 Once we got to the park we first went and registered for our campsites. As I said we are “trapped” in the interior campground for 3 nights. We got our bus tickets for our trips further into the park. I had also booked a night at the campground near the entrance. Online the next night was unavailable. At the registration desk she checked again and one had freed up so we will spend 2 days and nights exploring the entrance areas which had a bunch of hiking trails and ranger talks.

Before we went into the park we dumped our tanks. There are three dump stations and at each one was a rental RV. They were obviously together and also obviously had never done this before. It was fun to watch them try and figure it out, with the added pressure of us parked just behind them watching and waiting. When he seemed lost I got out and offered some tips.

The rental RV are everywhere. 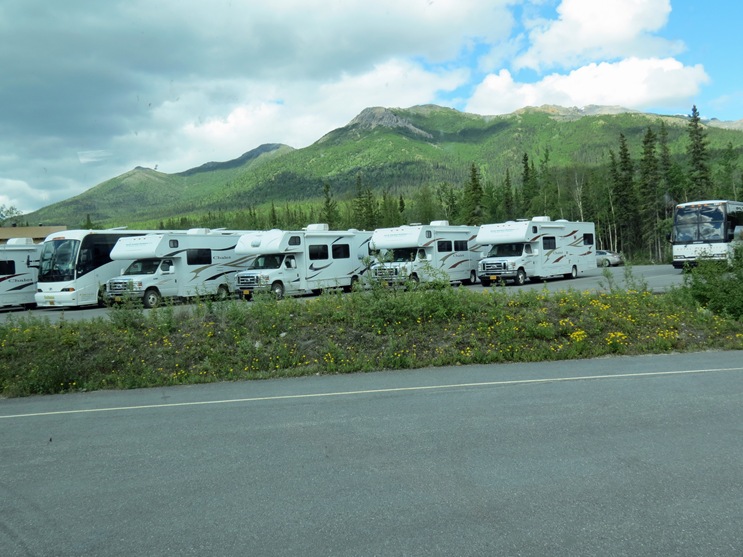 Once we started in it was 15 miles of pavement and then 15 miles of dirt road to the campground. We are up on a rolling plain with mountains surrounding us in the distance. 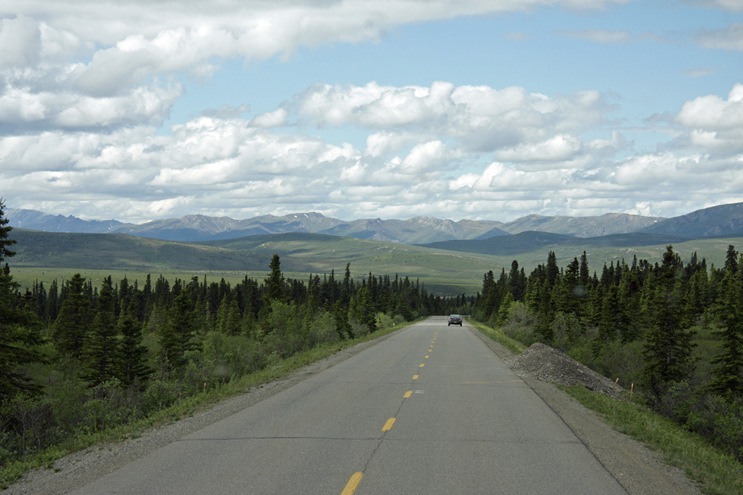 It was very hard to judge distances as you could see so far away. 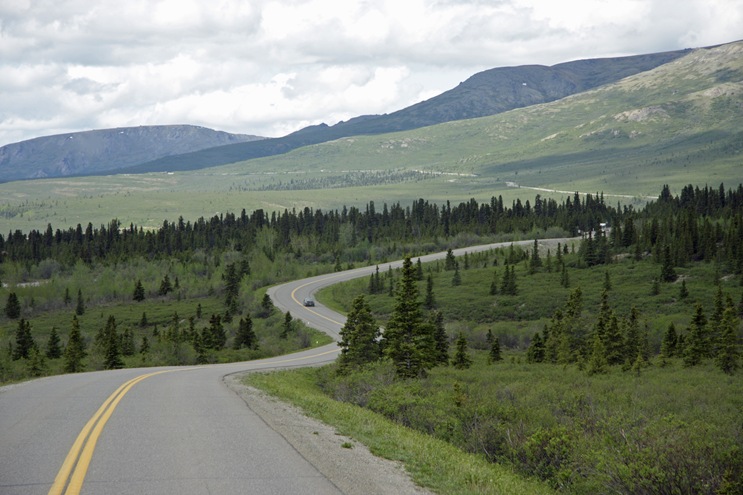 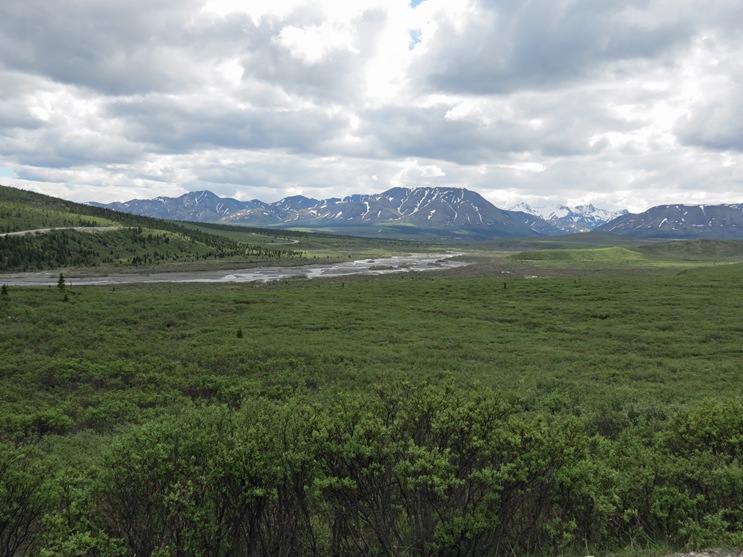 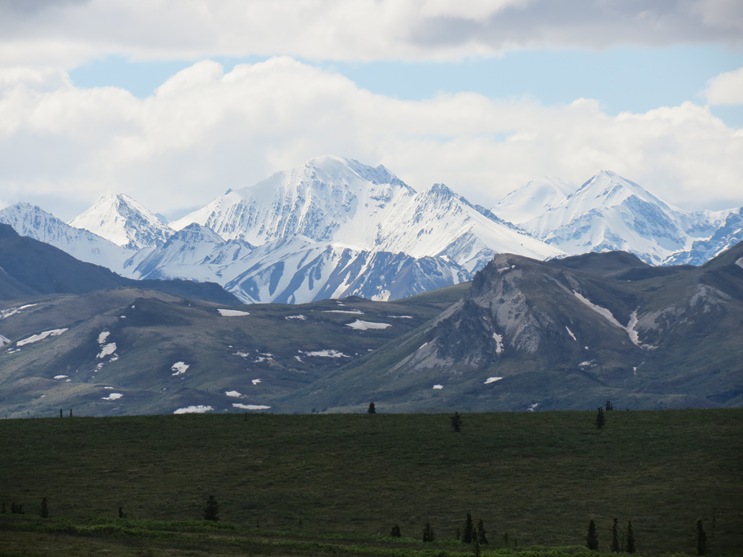 Private cars are only allowed up to the end of the pavement. After that we just had to watch for the shuttle buses. They are very good about slowing down when they pass you so as not to kick up any gravel. 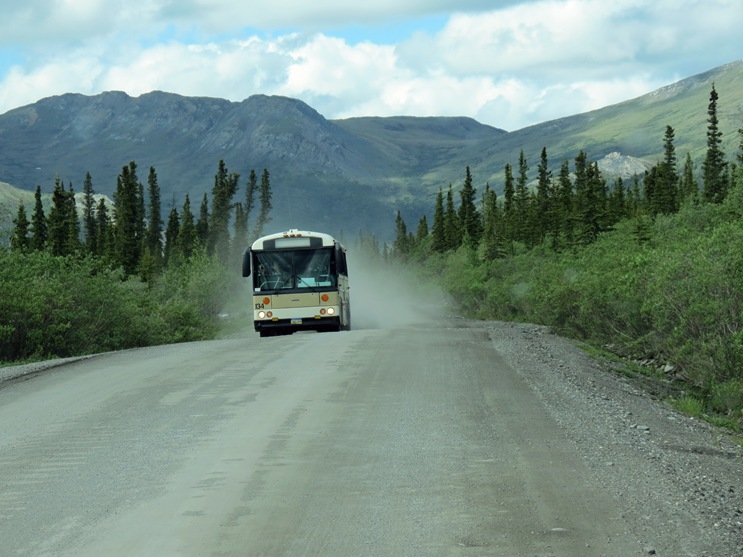 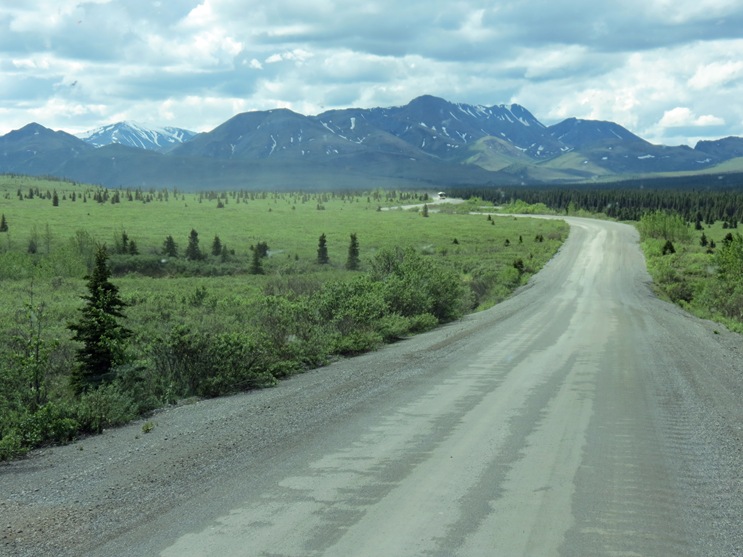 Once you get to the campground you can just pick any open site. They say they are for up to 40 foot RVs and they mean it. We just fit. 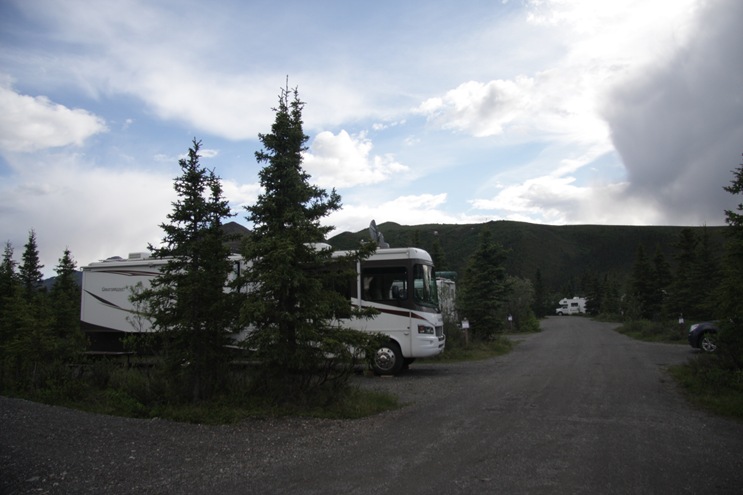 Next to the campground is a wide gravel river bed with great views of the mountains. 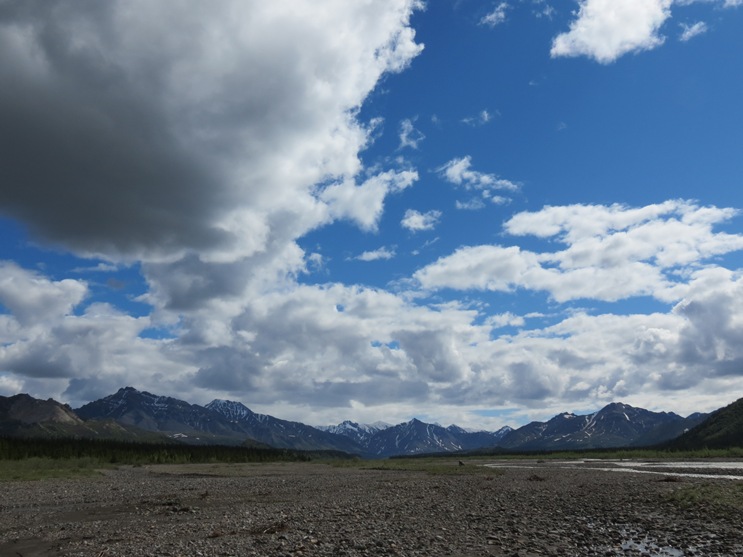 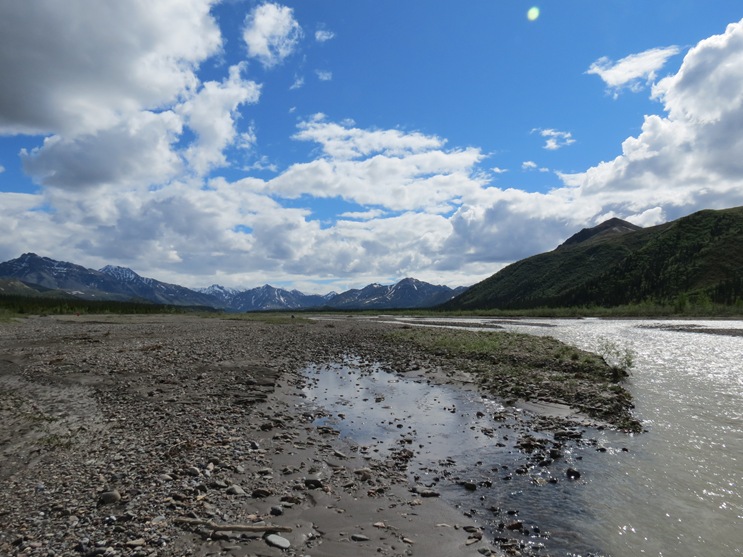 I sat on the ground and just relaxed for quite a while, sharing the view with another couple who had had a little more foresight and brought chairs. You can barely see them in the pictures above. 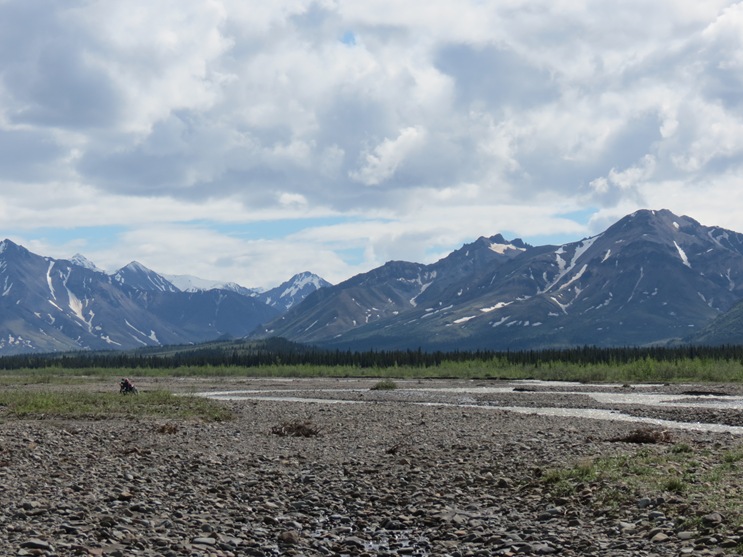 The mosquitoes are fierce here. All of the people tenting have head nets on, with gloves and coats tightly done up. I don’t think Jennie will be joining me at the ranger talk tonight. 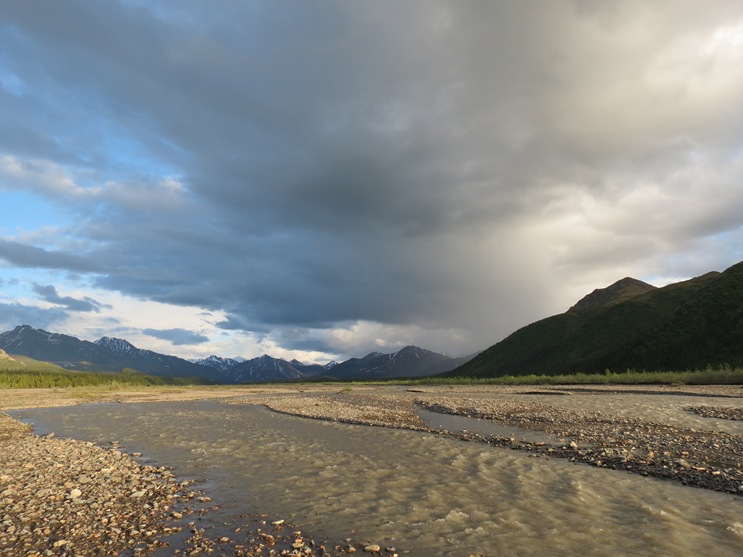