Just a side note first. In some emails and phone calls, it seems that people think we are not enjoying ourselves as much as other years. While there has been none of the truly awe inspiring scenery of our previous trips, I have wanted to explore this area for some time. We have been skiing in Vermont in the winter but I wanted to see the area in the summer. We also wanted to do more biking on this trip and we have found lot of paths that match our fitness level, with more to come, especially in PEI. So, yes, it is a different trip from the others but we are still having a good time. Besides we love sitting by any sea coast.

Yesterday it was raining in the morning so we just rolled over and went back to sleep. It got better in the afternoon but we needed an off day so we did a few chores but mostly just relaxed.

Today was another “Oops I did it again” day. On paper it should have been an easy bike ride. A total of 20 km in two loops, both marked as “easy/family” in the guide book. What I didn’t account for was the heat. It was easily in the mid 30s but on top of that there was absolutely no wind. A lot of sweating happened today. 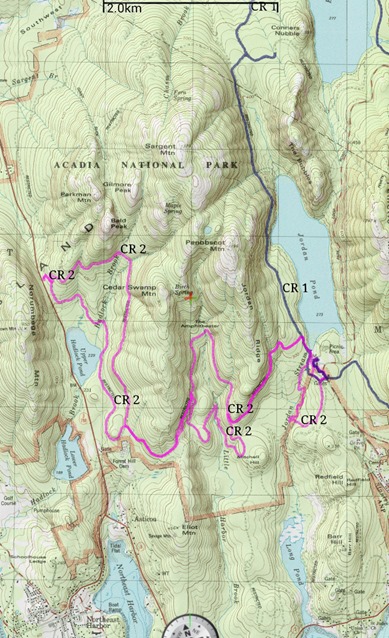 There was also not a lot of flat riding. There were only a few steep pitches but by the end any incline had us walking.

There were however a lot of bridges. I am sure you will get bored with all the pictures but each one is different and interesting and I want to document all the ones we got to.

The first one looked like it had three arches but two were fake. 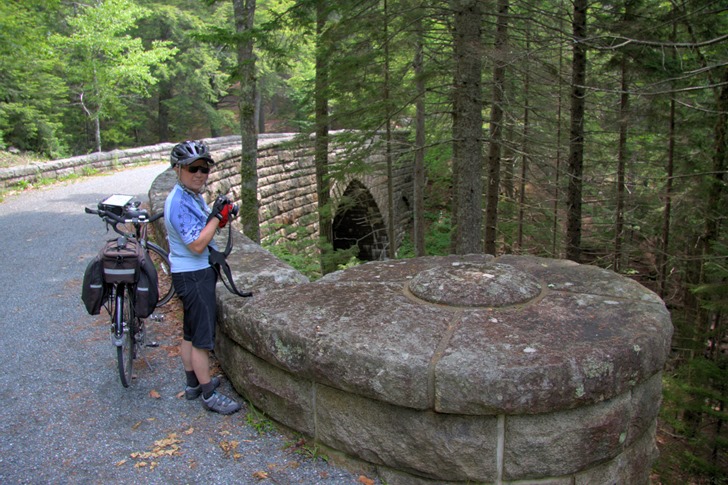 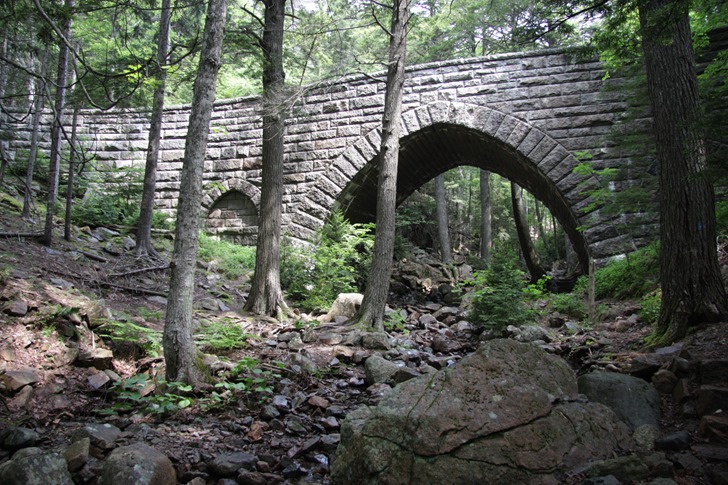 The second was a big one with nice viewing platforms. 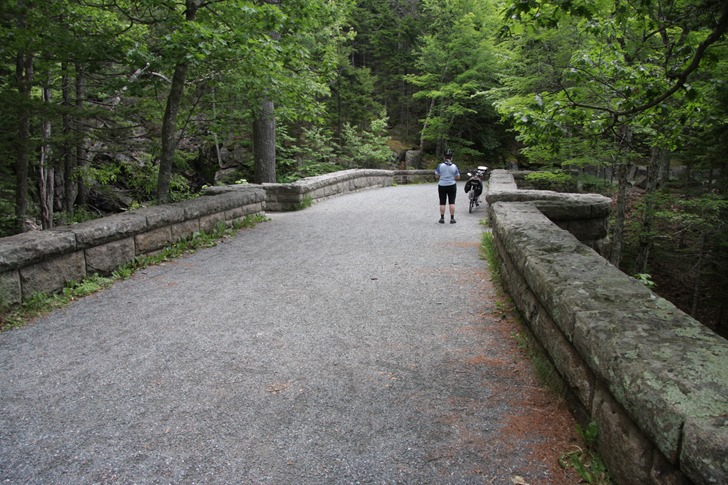 I always tried to get down below them. 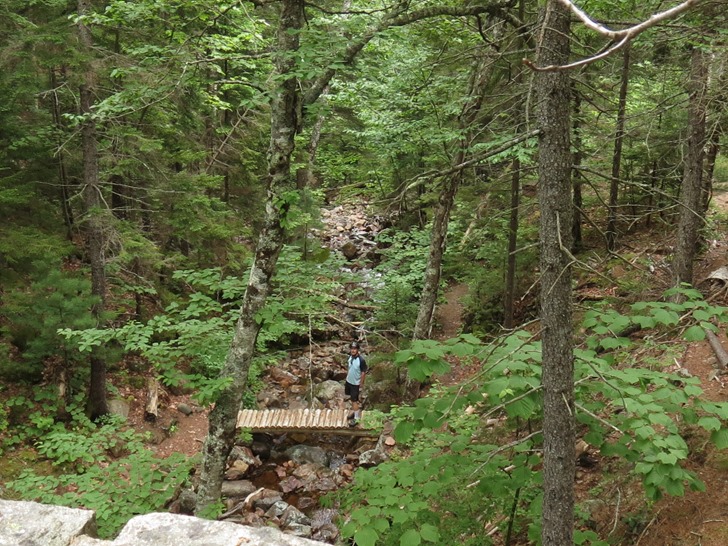 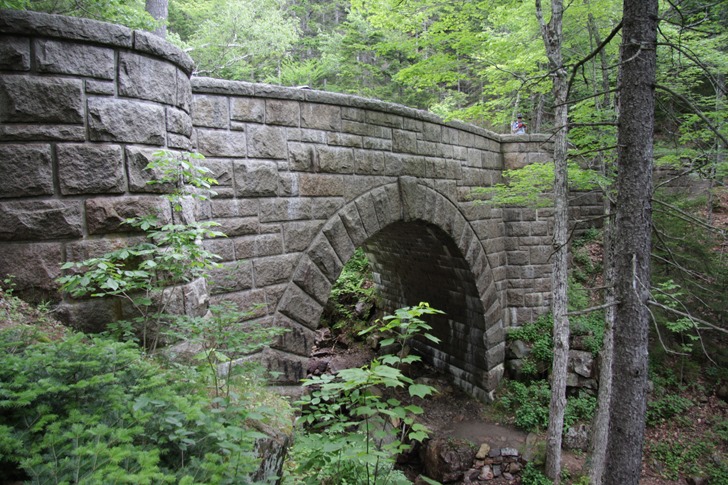 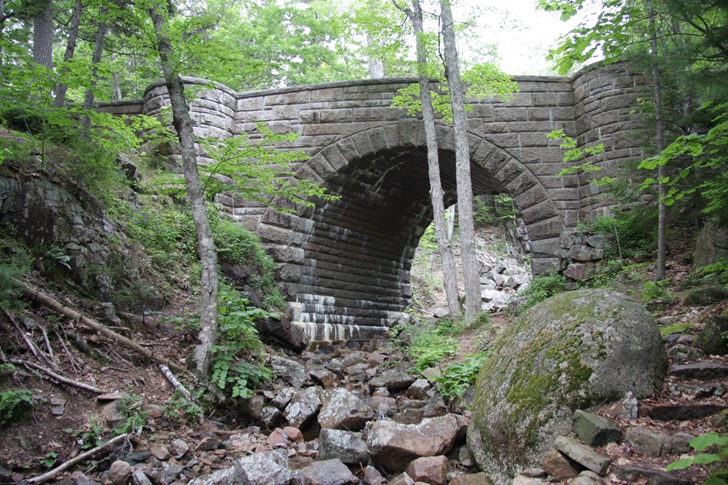 The roads were mostly hemmed in by trees so there were not a lot of long views today. 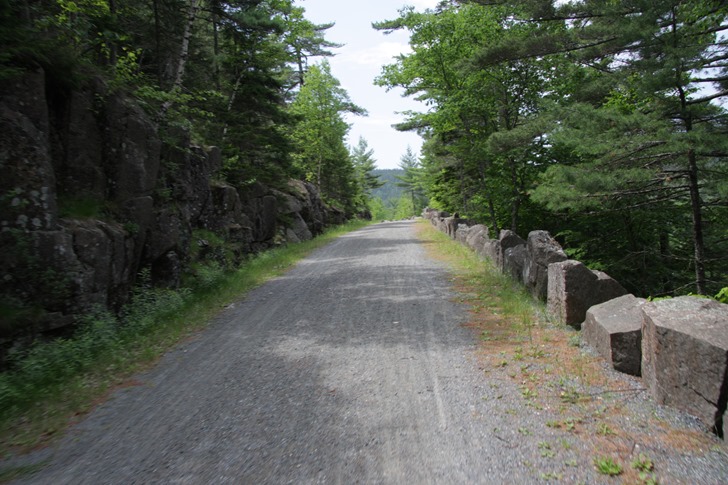 Just the occasional peek south to the ocean. 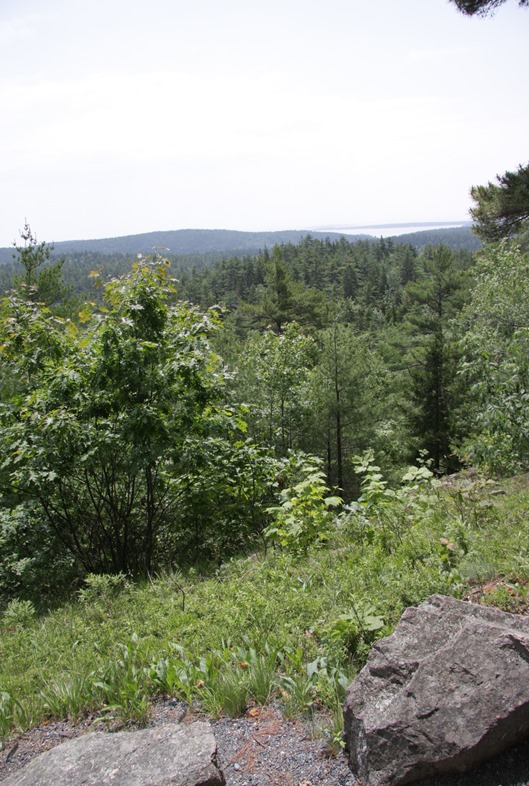 Next was a long curving one. 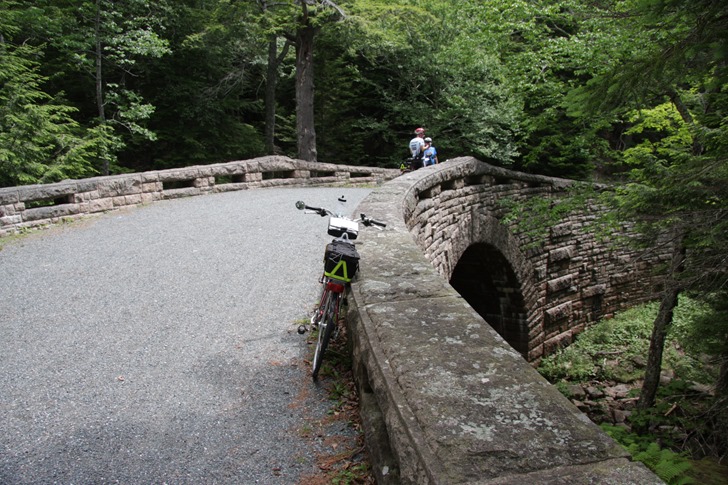 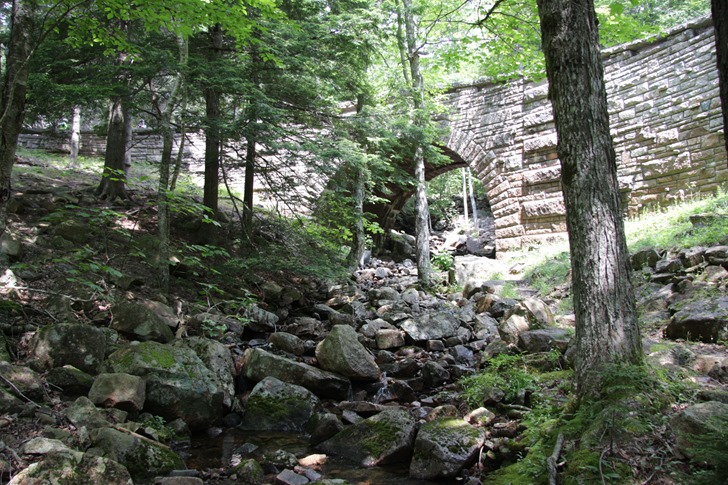 That framed a small waterfall. 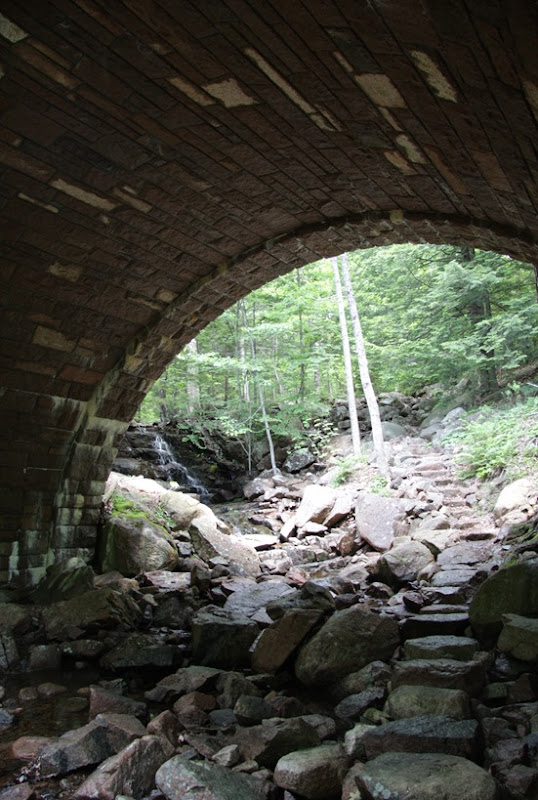 Next was a really long one along the edge of a cliff. 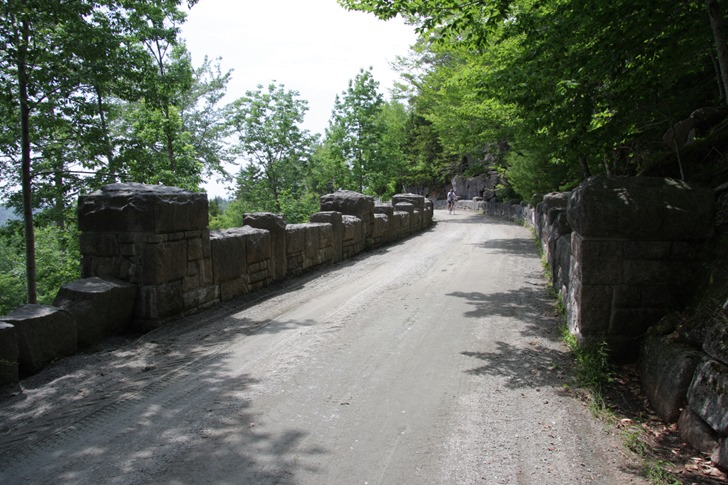 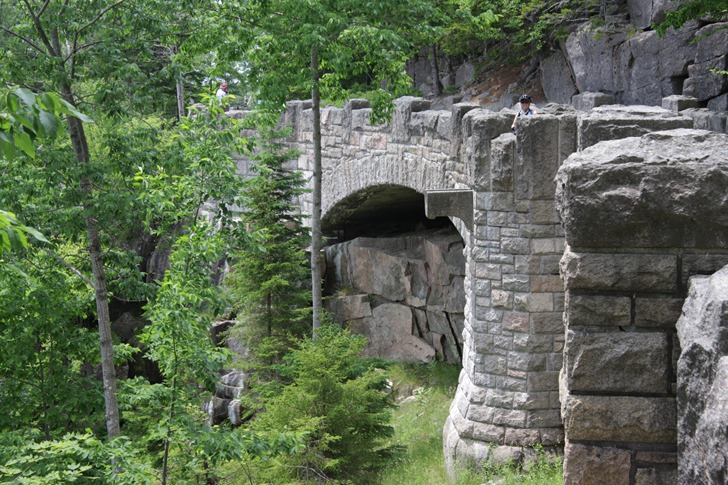 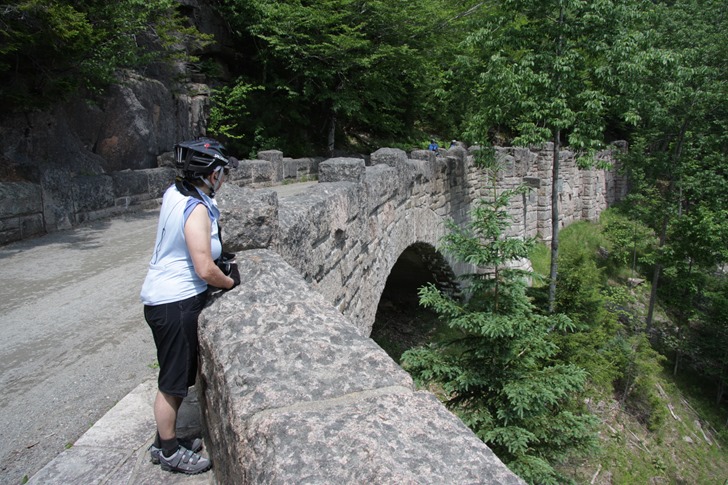 We decided to continue on to the Jordan Pond Restaurant again to have lunch (mainly because of the washrooms). We had our own lunch, not theirs. We got the good seats today. 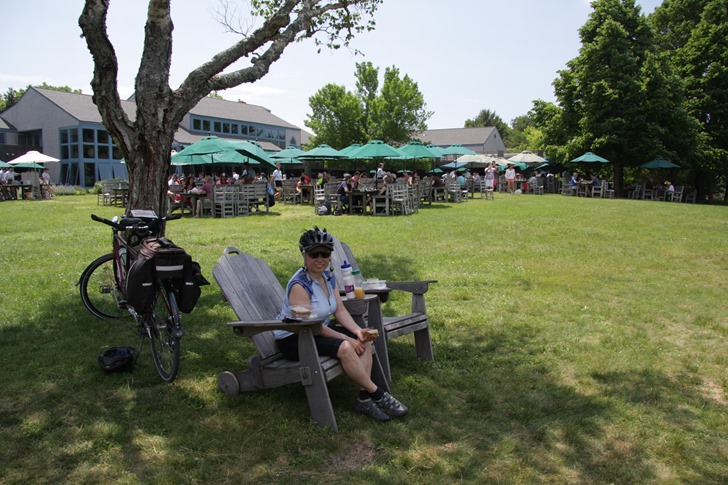 We must have gotten there just before lunch time because all the shady spots on the lawn, including ours, soon filled with bikers. Nobody sat in the sun. 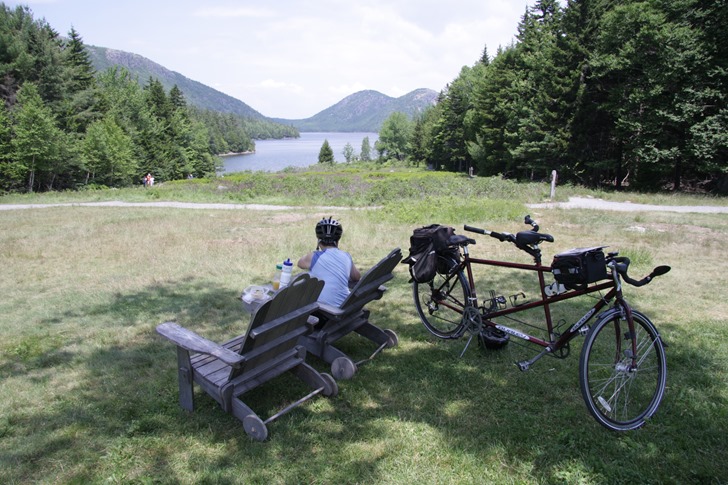 The small loop we did after lunch went steeply down and then followed this stream back up. We walked a lot of the hill just to look at the water (at least that’s what we told ourselves). 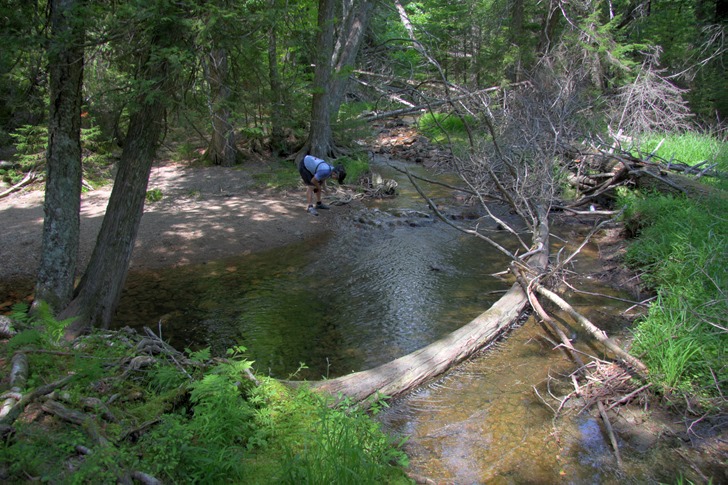 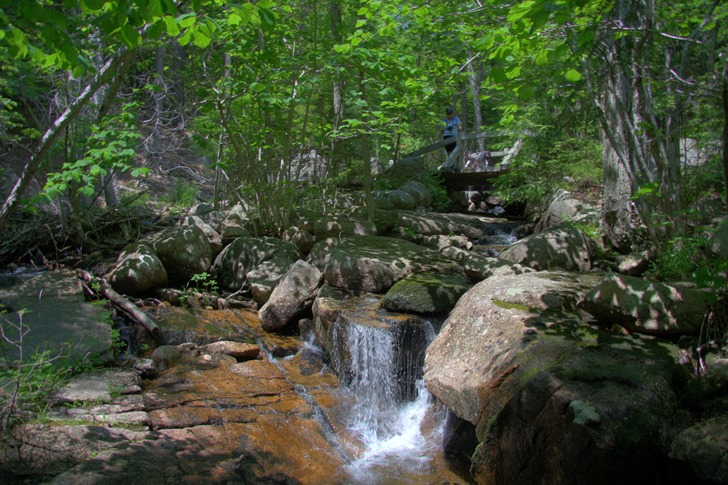 The next bridge was another long curving one with a very narrow opening. 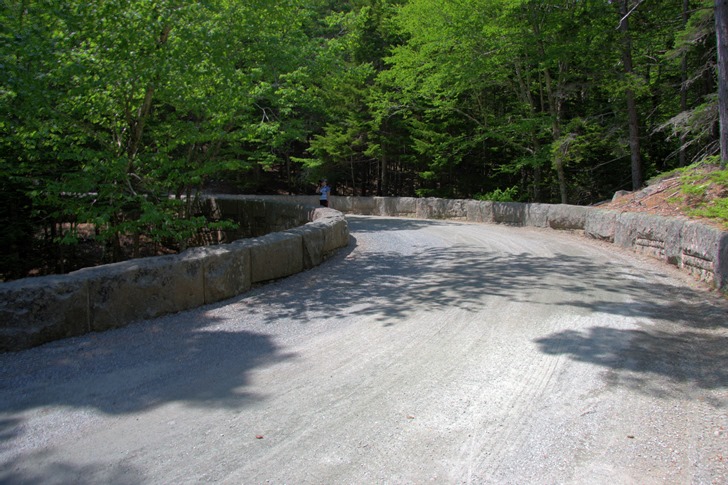 You weren’t allowed to climb below this one. 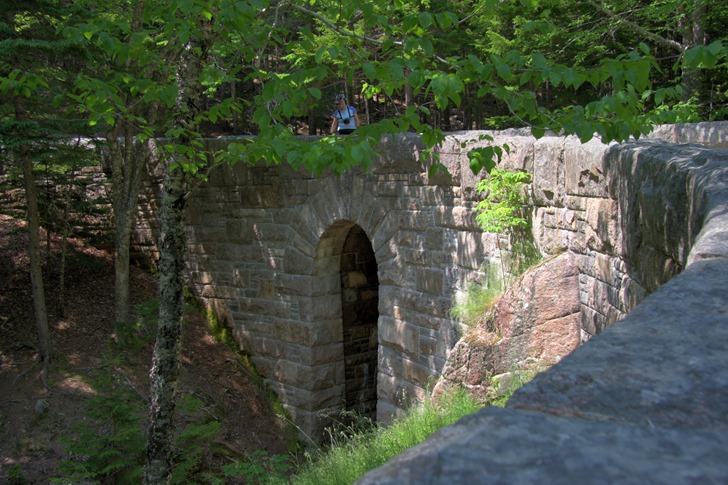 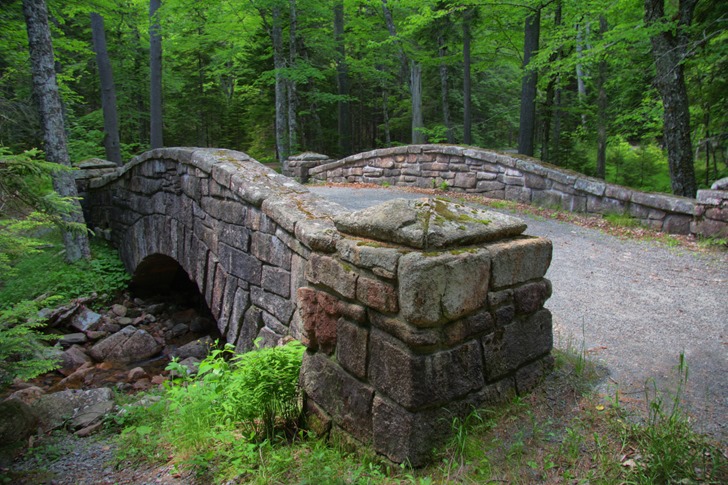 Even though there are a lot of junctions in the roads, they are very well marked. Each post has lots of signs saying what is in each direction and there is a number which you can find on the maps. 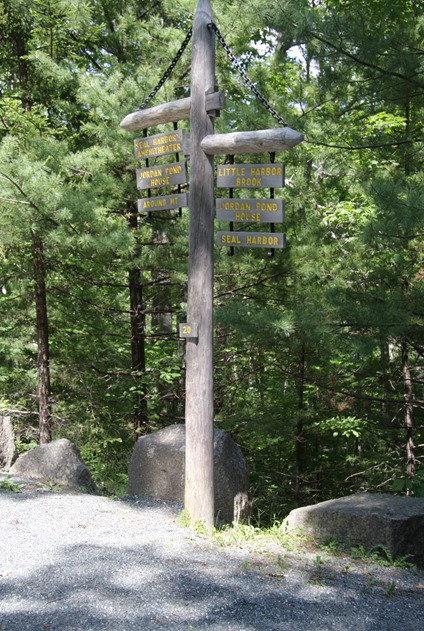 We did a long slow climb, which would have been easy in cooler weather, for our only wide open long distance view. 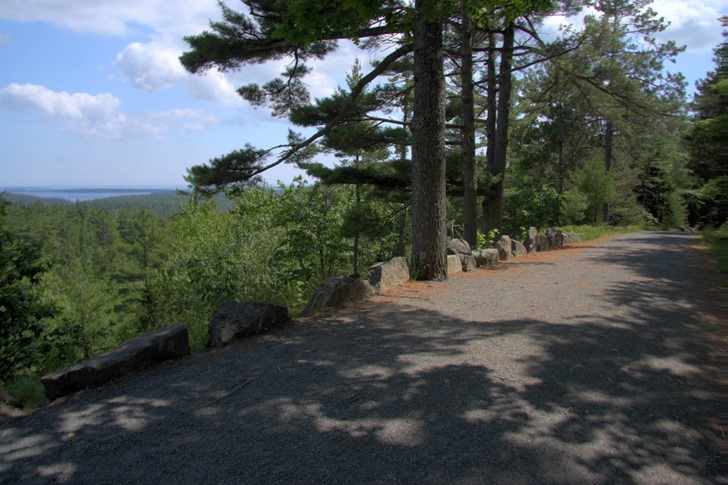 From here it was a wonderful slight downhill almost to the car, producing enough wind to give us some relief.

One last bridge. We sat in the shade to rest. 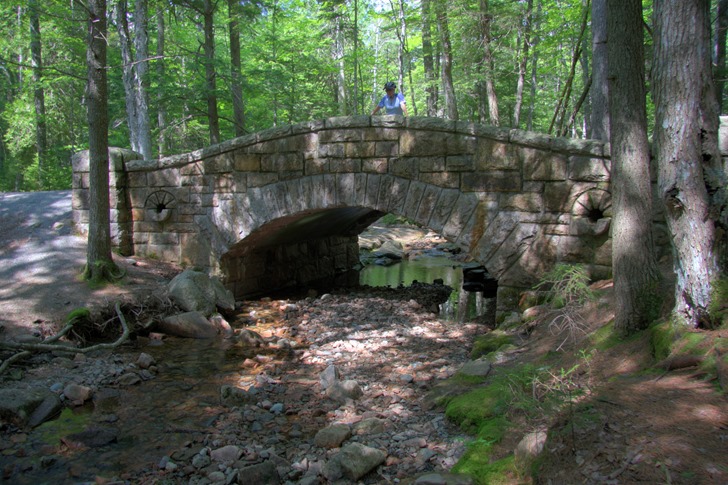 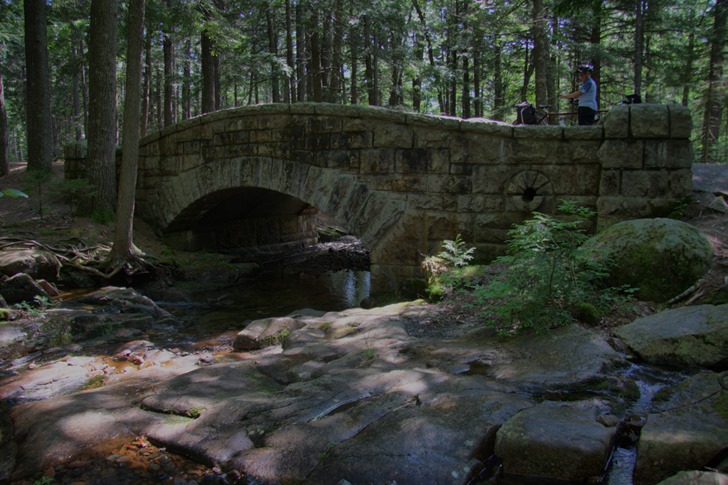 Just before we got to the car the road went steeply up resulting in a last bit of walking until the relief of the car’s air conditioning.

Back at the campground we quickly got into our bathing suits and went to use the pool for the first time. It was cool to get into but once in, felt wonderful.