It turns out that the hike we did on Cottonwood Pass is not part of the Colorado Trail. I was confused because one of the hikers that we met said he was chairman of the committee that maintains the Colorado Trail. Today we really did do a small portion of the trail. 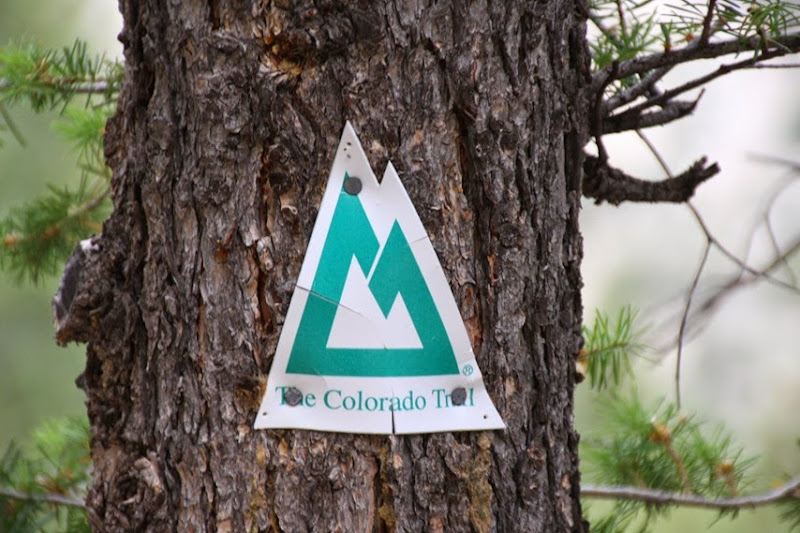 I decided that we would try a lower elevation hike today. I had bought a book called “Mellow Mountain Trails”. It said that this section of the trail made for an “easy family hike”. From the hike’s spec I knew that meant “Colorado easy” because it climbed from 8300 feet in elevation up 900 feet in just under 2 km.

The hike starts at the bottom of Chalk Creek Canyon. It is called Chalk Creek because the cliffs on the northern side are very white and look like they are made of chalk, but they are not. 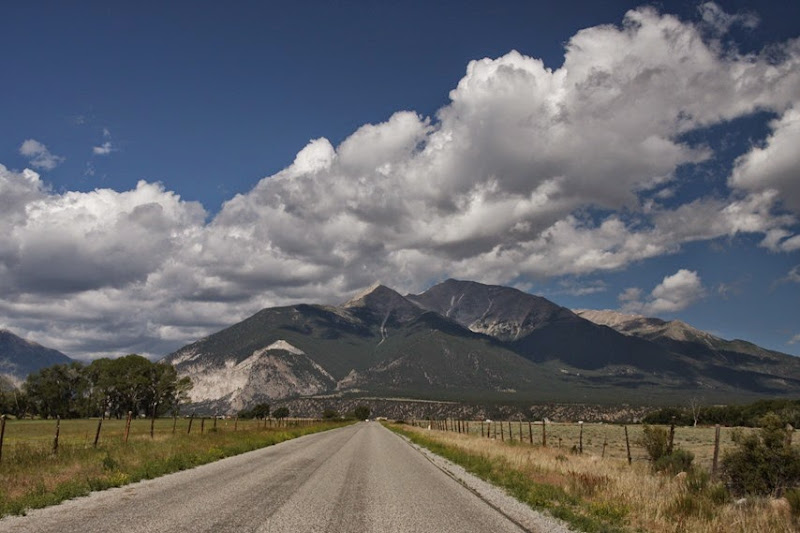 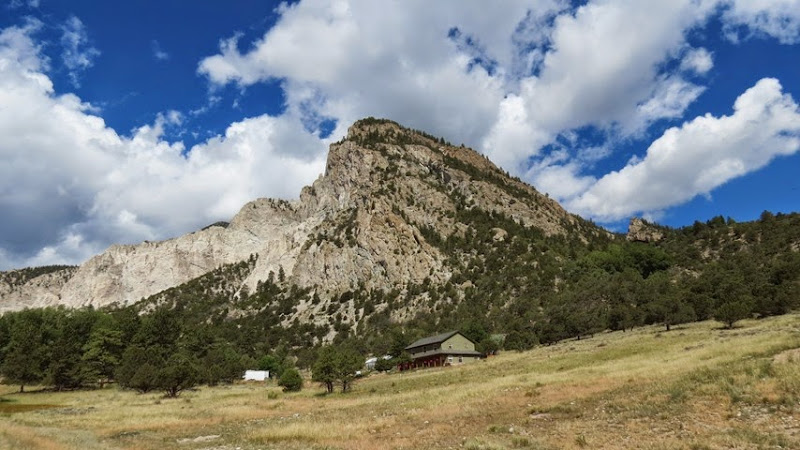 The trail starts at Chalk Creek itself. 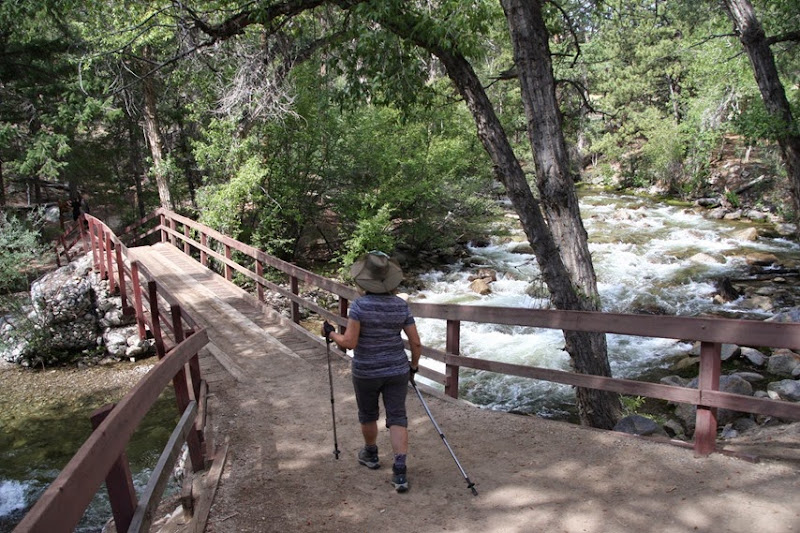 It climbs the southern wall of the canyon. It starts out gently and then gets steeper and steeper until we were doing tight switchbacks up to a ridge and viewpoint. 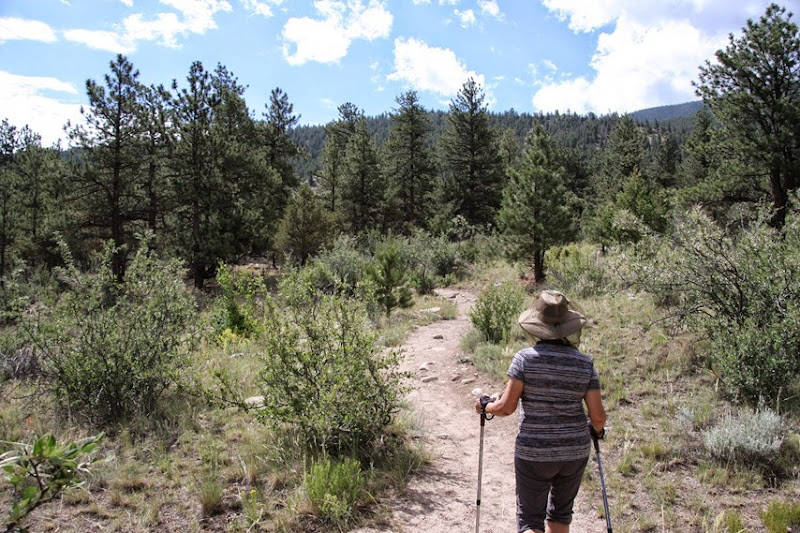 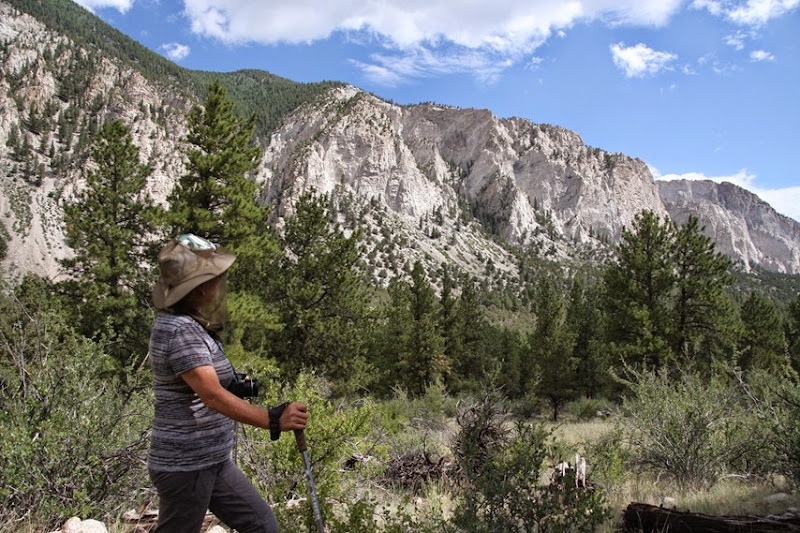 Once we started the serious climbing it was not that scenic. Large trees blocked our view back across the valley. 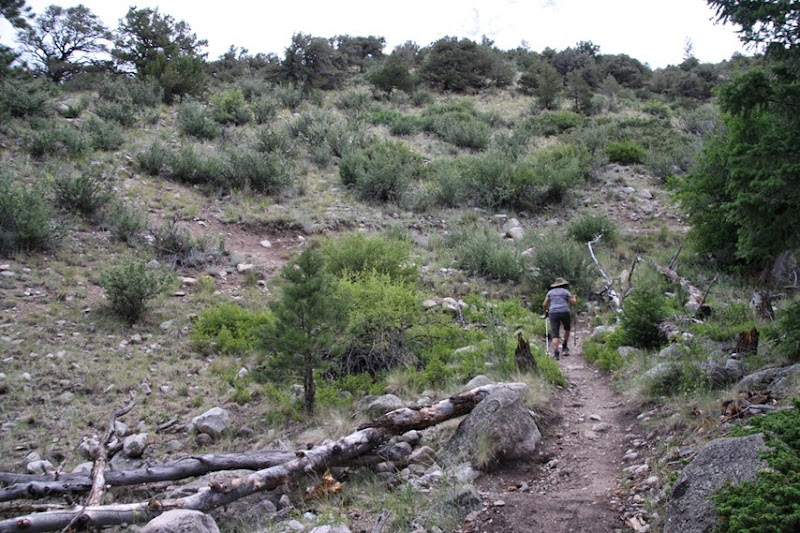 Jennie is in the upper right corner, below. 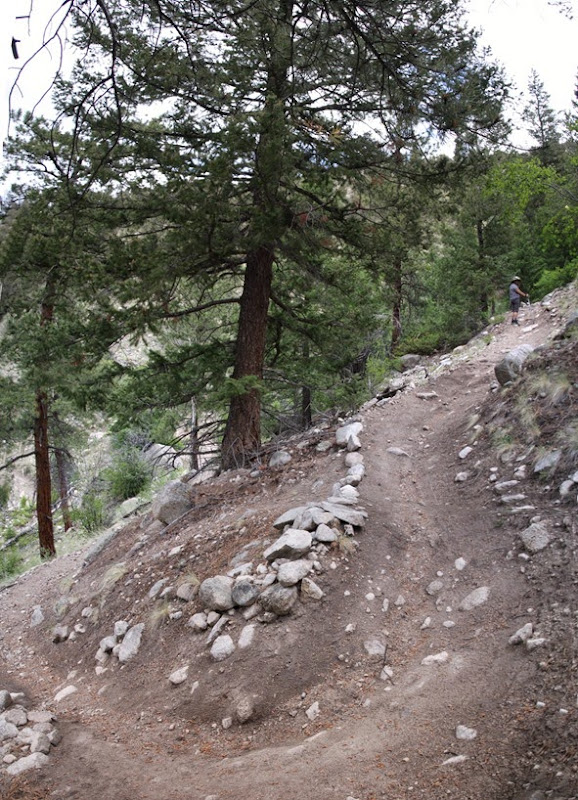 A blooming thistle beside the trail. 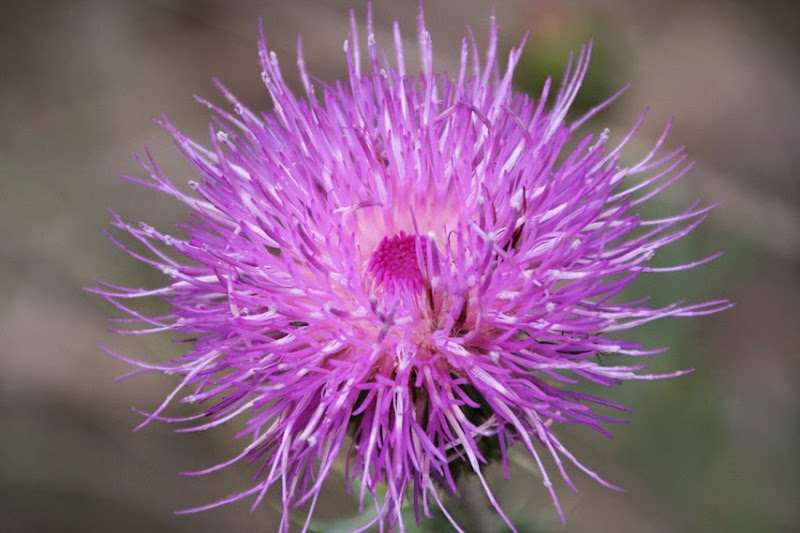 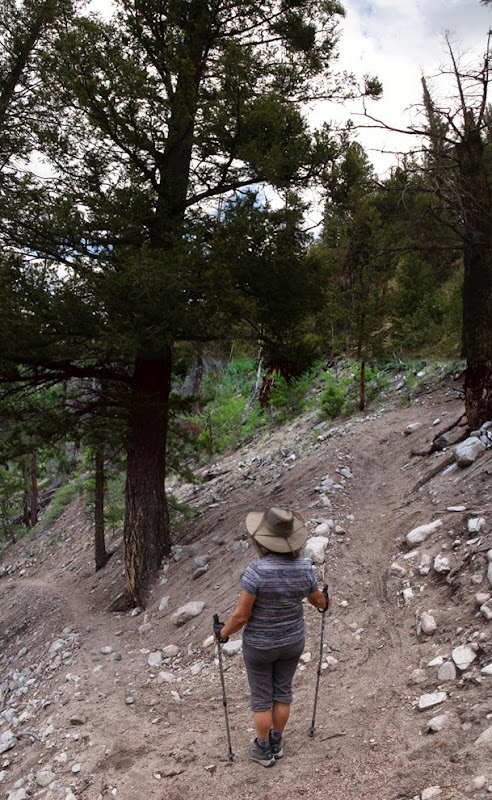 We reached the top of the switchbacks and thought we were at the viewpoint. 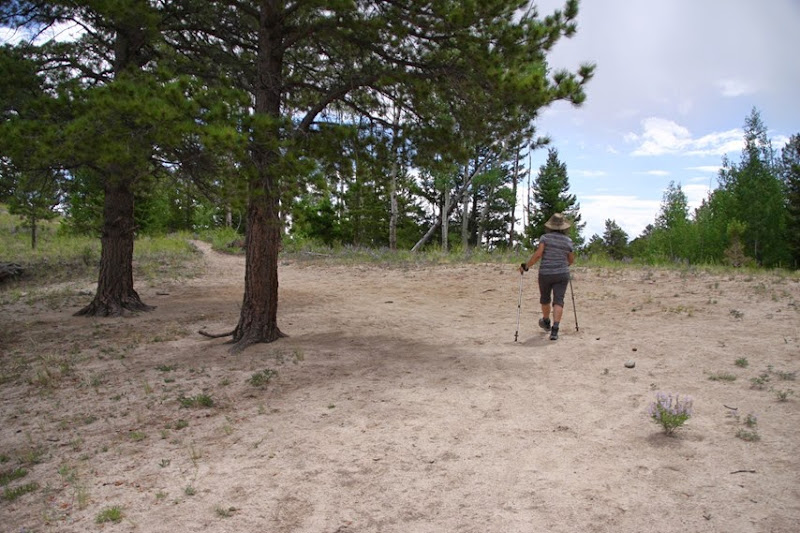 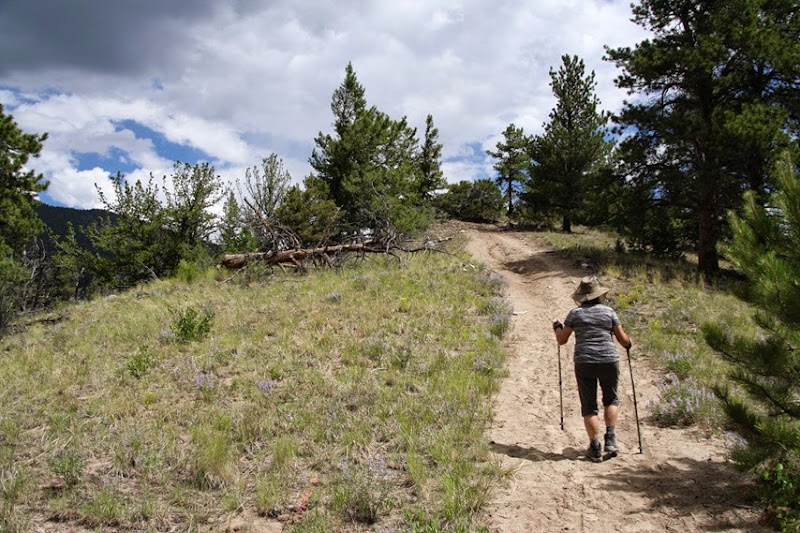 Once we got to the top we said “This is the viewpoint?”. Still more trees in the way. 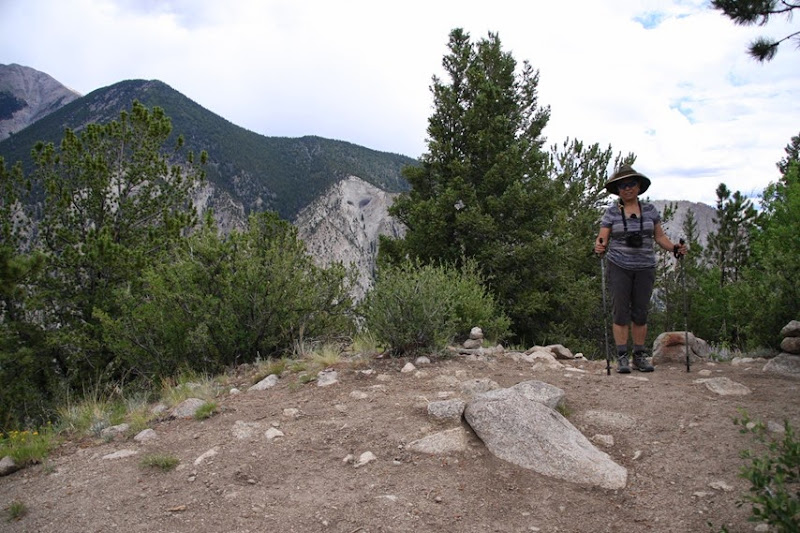 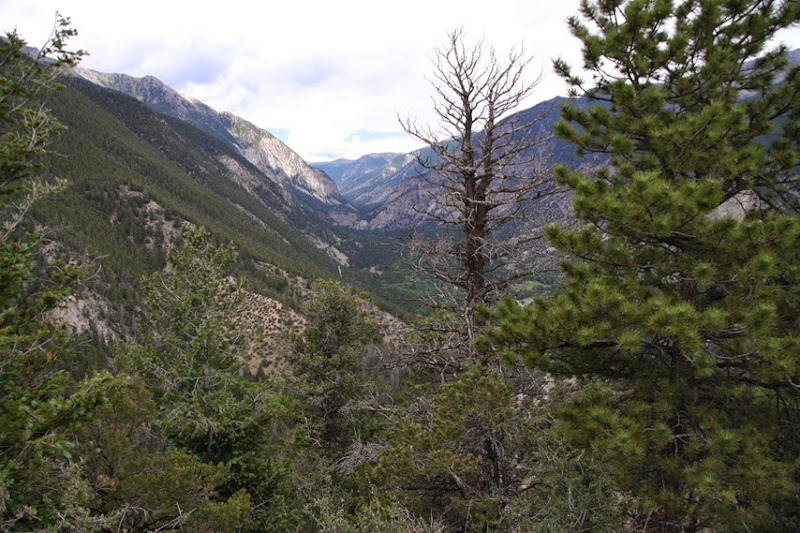 I said that there was no way we had worked this hard to climbed this high and not get a clear view. We walked off the trail through the trees, out on an exposed ridge, for a better view. It looked like other people had had the same idea in the past.

We sat and had our lunch. We are always amazed to look down and see how far we have climbed. 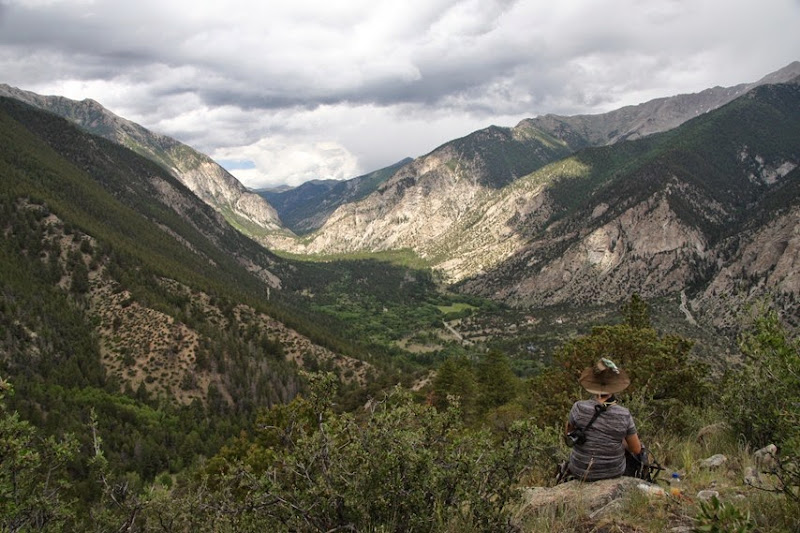 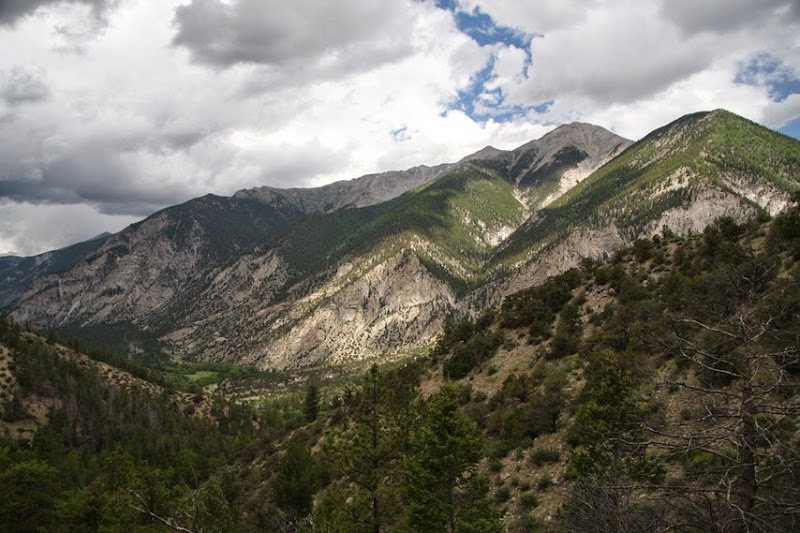 The mountain directly across from us is 14,200 foot Mount Princeton. Too bad the sun went away. 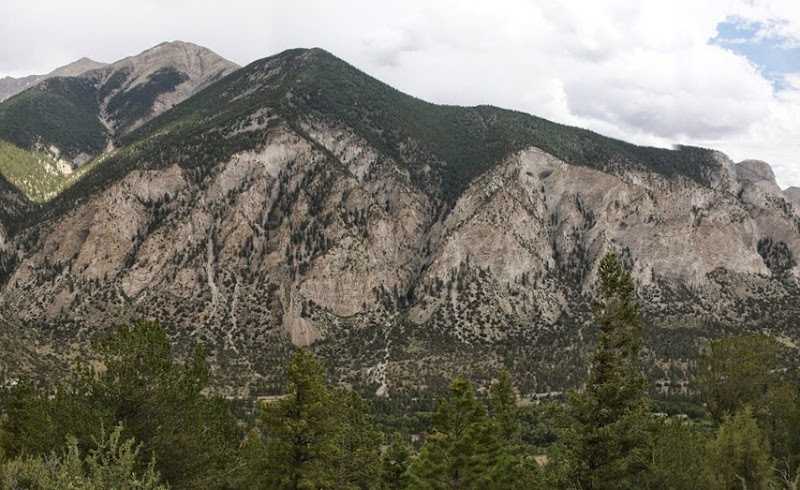 I am going to mention the weather again. It was an even crazier day than usual. We left a little later than other days but it was still bright sunshine. By the time we started the hike we could see the dark clouds over the peaks. We were in and out of the sun the whole time.

The same two planes from yesterday flew over again, in those threatening clouds. 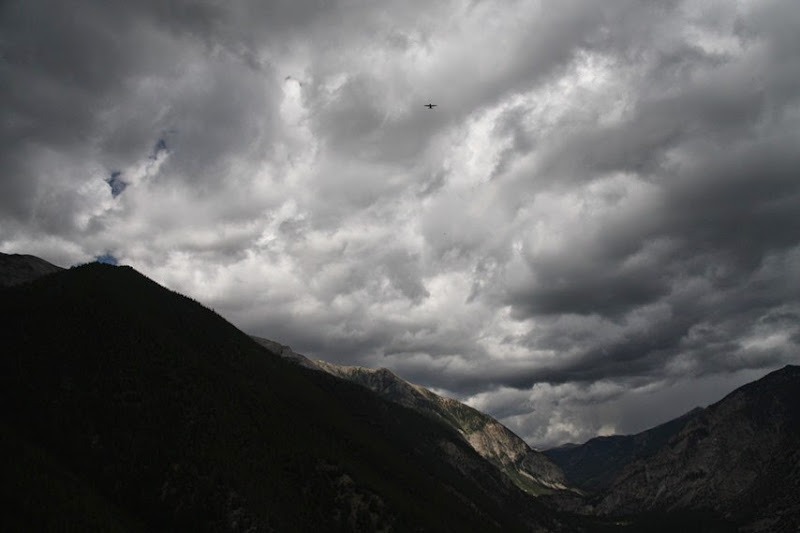 On the way up we even heard some thunder to the south of us. Normally we would have turned around but it was clear above us and we were almost at the top. Near the bottom on the way down we heard more thunder but this time in the north.

With all the dark clouds around we only got a few drops of rain on us the entire time. 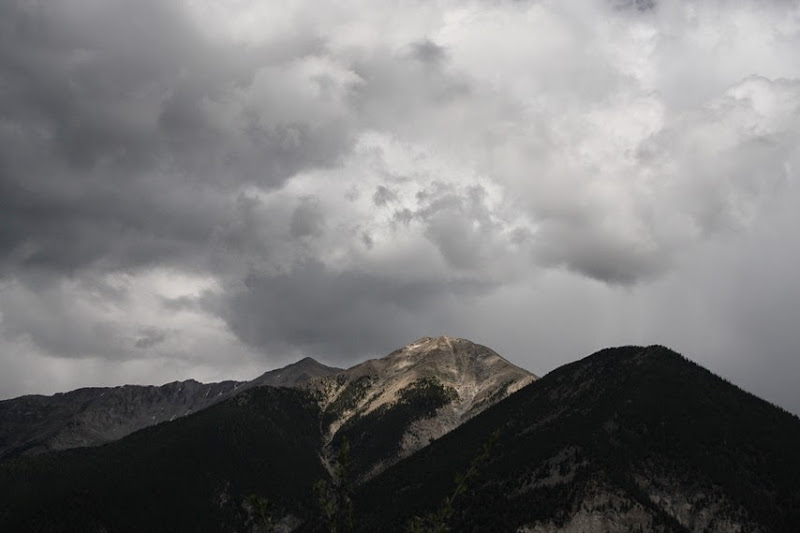 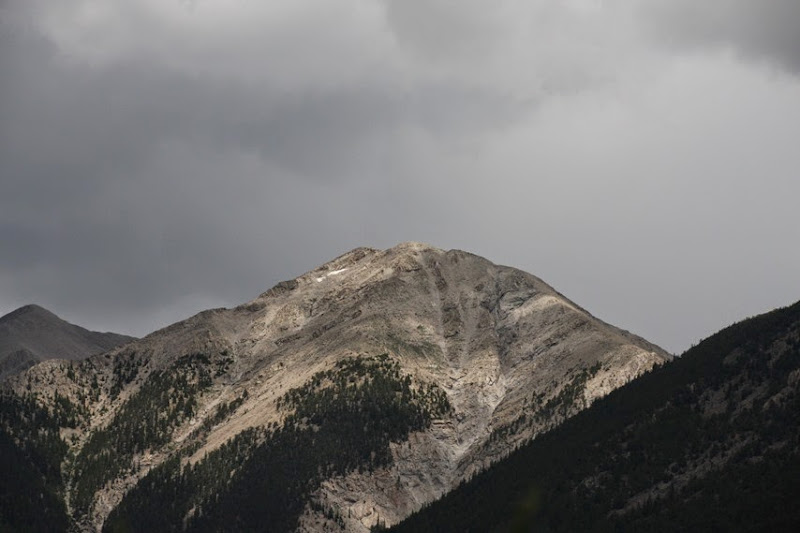 On the chalk cliffs we saw a face with alien looking eyes. At one point the rest of the cliff was dark with only the face lit by the sun. 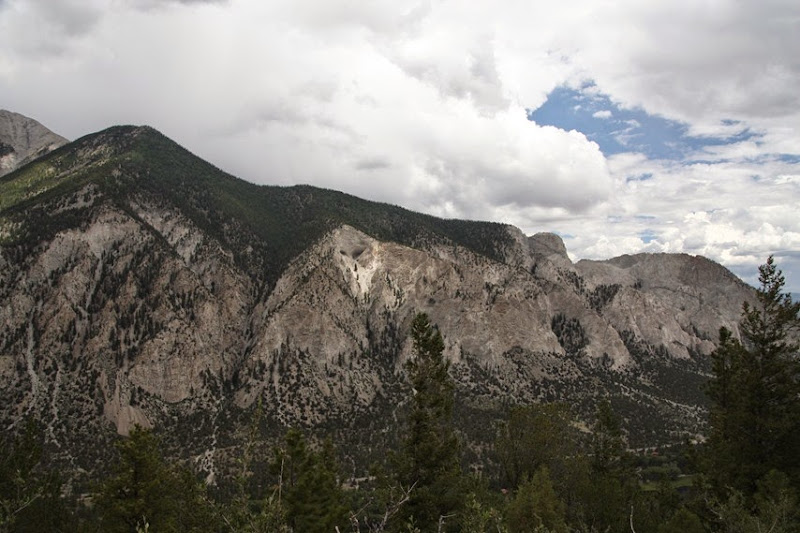 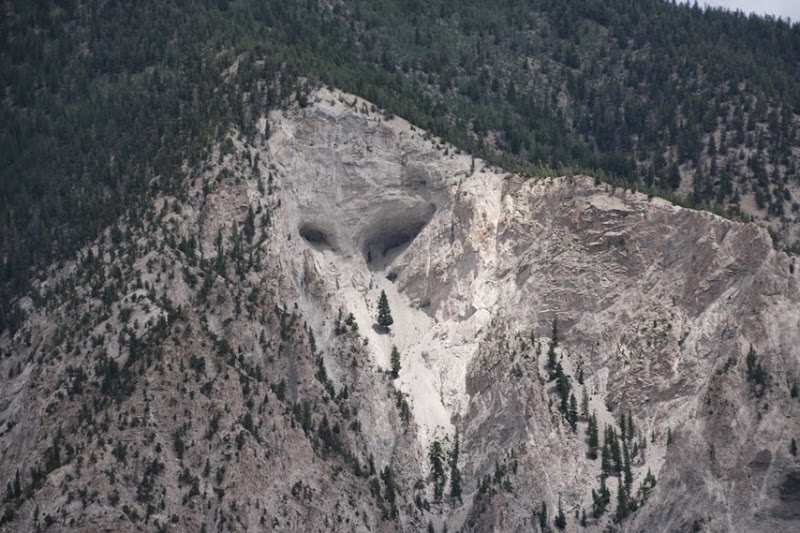 The trail was pretty empty. A middle aged couple passed us on the way up and short while later went passed us again RUNNING down! We also saw a family doing the “family hike” and near the top encountered a couple on horse back. 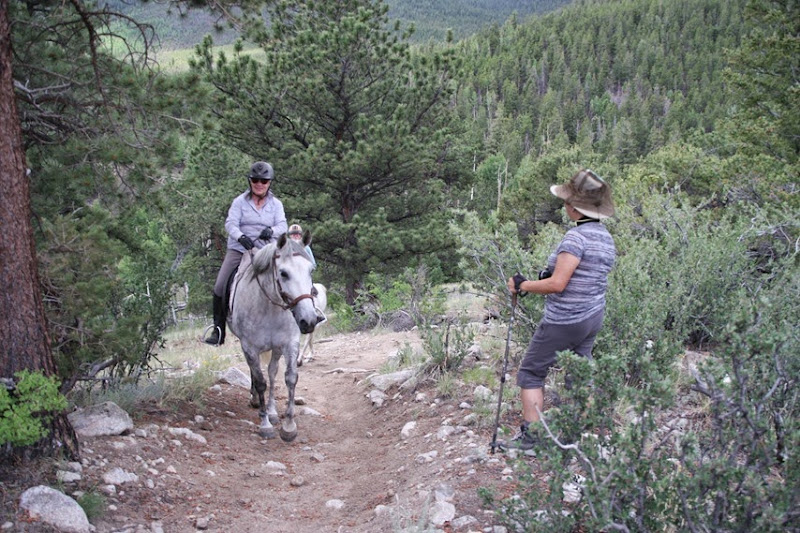 Unfortunately for Jennie that meant fresh deposits on the way down. The hoof prints also chewed up the trail a bit. 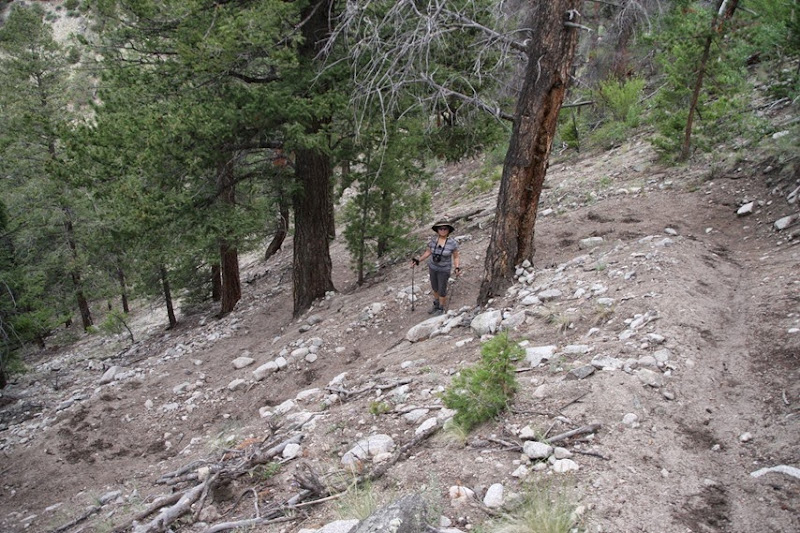 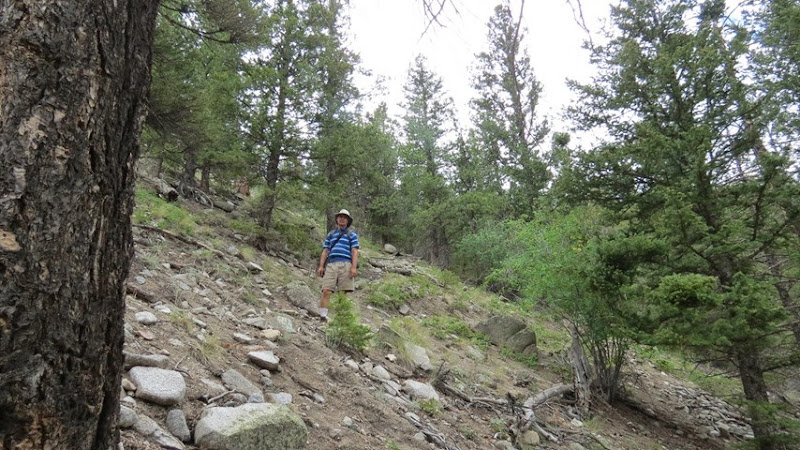 Back down at the bottom it looked sunny and beautiful to the north. 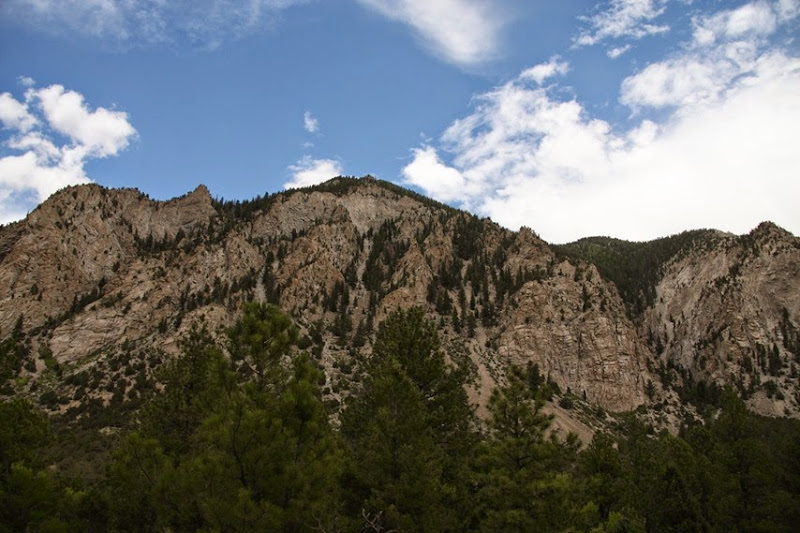 And dark and ominous to the south. 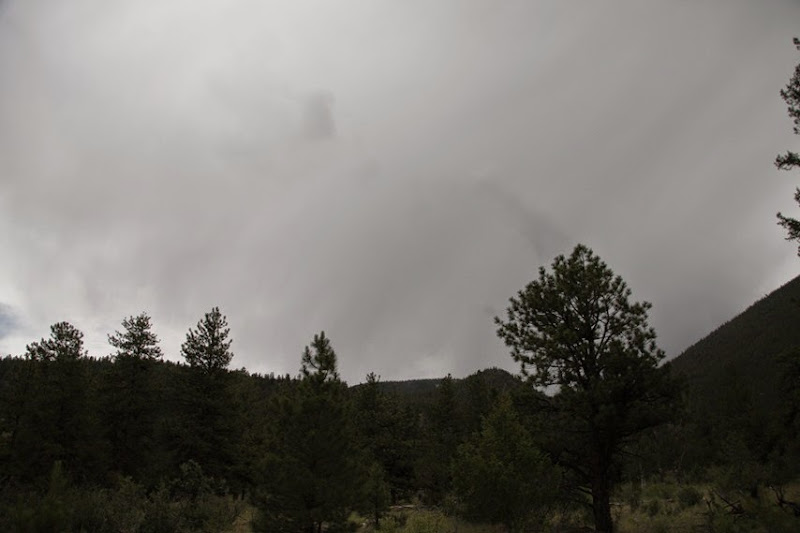 Once we were back at the RV it rained on and off, sometimes quite hard, all afternoon.

The lower elevation made this hike easier for Jennie. We were both huffing and puffing on the way up but that was just because of the steepness. On the way down we were both fine. There are a whole bunch of other hikes to try but all the interesting ones are at high elevation. We will see.