Today we took a national park service boat tour in the Morrow Point Reservoir of the Gunnison Canyon. Whereas a couple of days ago when we drove Highway 92 we had the views down into this reservoir, today we get the reverse.

Normally they start doing this tour in late May or early June. This year, today was the first day it was in operation. Since the rest of the west has been so dry this year, they had commitments to send the water on so the level in the reservoir has been much lower than normal. They couldn’t get the boat to the dock.

When I booked the trip several weeks ago, they said July 2 should be the first day. I booked it for the last day of our stay just to have the best chance. Sure enough…

We start the trip just below the Blue Mesa Dam. You can drive part way down into the canyon but then it is 232 (they counted, not us) steps down to the reservoir. 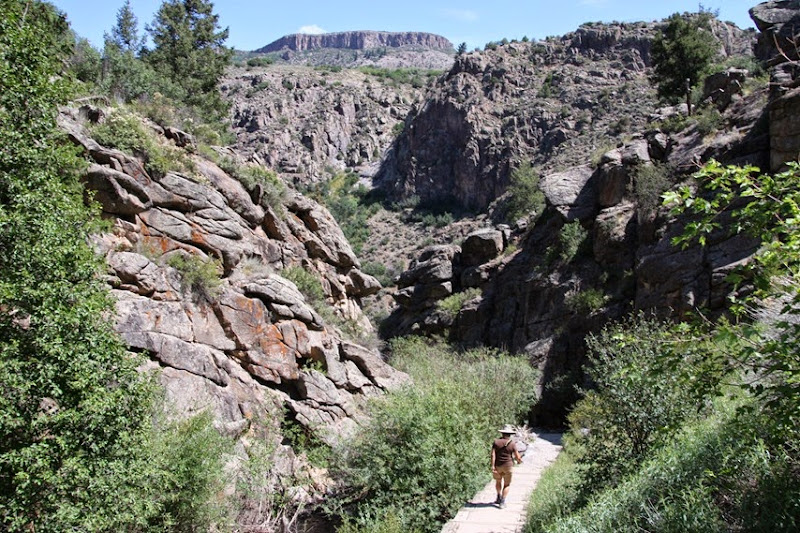 In the picture below the focus on the camera didn’t work quiet right but you get the idea. Going down was easy. 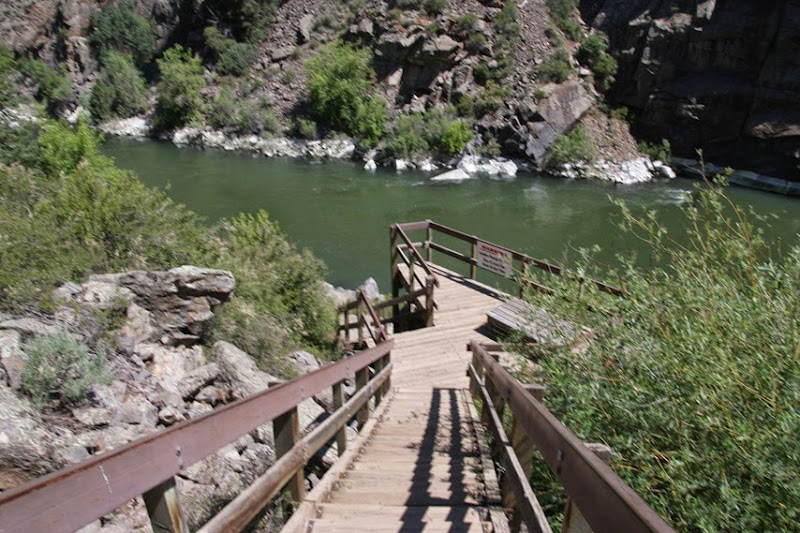 Then you have to walk about 1 km along the canyon wall to get to the dock. There used to be a narrow gauge railway that ran down the canyon. We are walking on the rail bed. Most of the rest of the rail bed is now far under water, after the river was dammed. 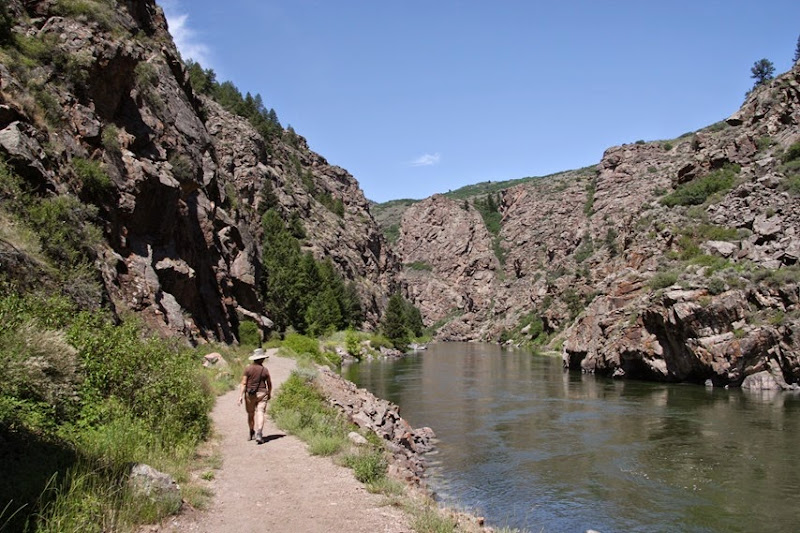 Our chariot arrives from the previous tour. It holds about 40 people.

You must reserve in advance. No walk ins are allowed even if the boat is completely empty. I guess they have no way to process payments down in the canyon. 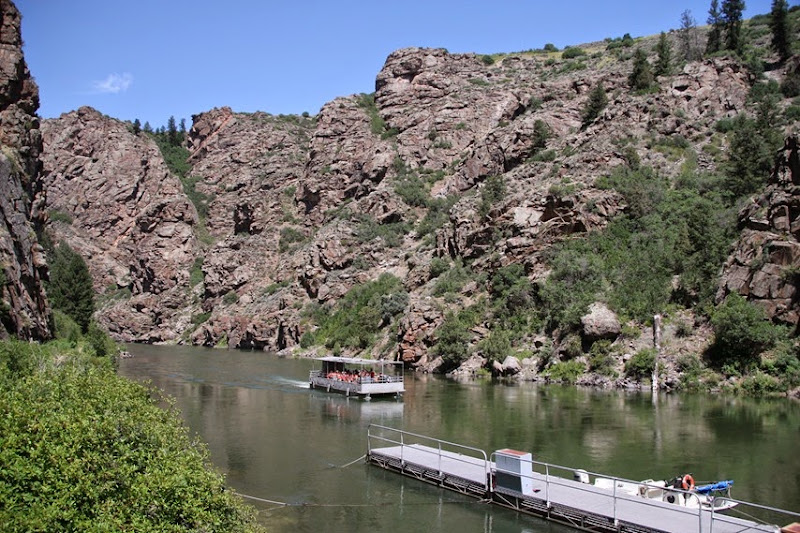 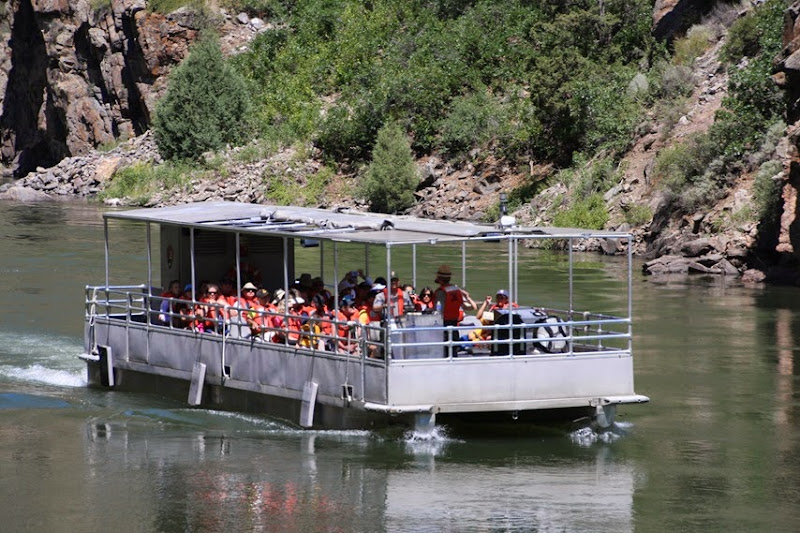 The trip heads about 7 miles up the reservoir. On the way up Ranger Curt gave a talk on the geology of the area, the railway, the cultural impact and the water. He was a pretty good speaker. We had to sit like a good audience for this part of the trip. 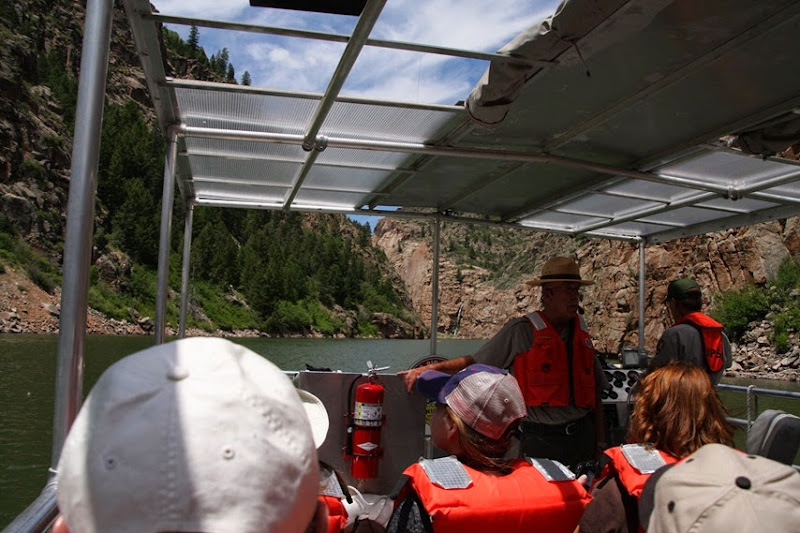 On the way back we could get up and take pictures whenever we wanted. He was just available to answer any questions.

I talked to the captain for a bit. In the winter he works in Florida at a tow boat service that goes out to rescue people whose boats have broken down. For a while he was even the captain of a large private yacht.  This year he almost went up to Alaska to pilot jet boats on some rapids but he had already committed to coming here. 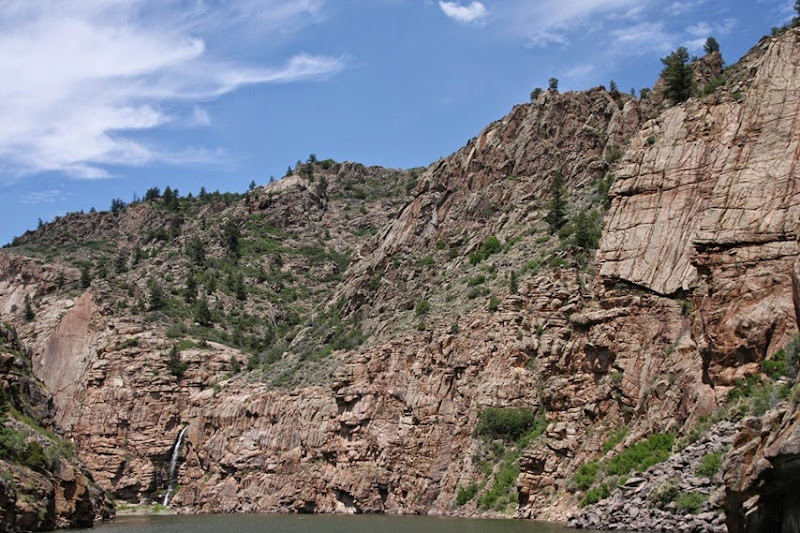 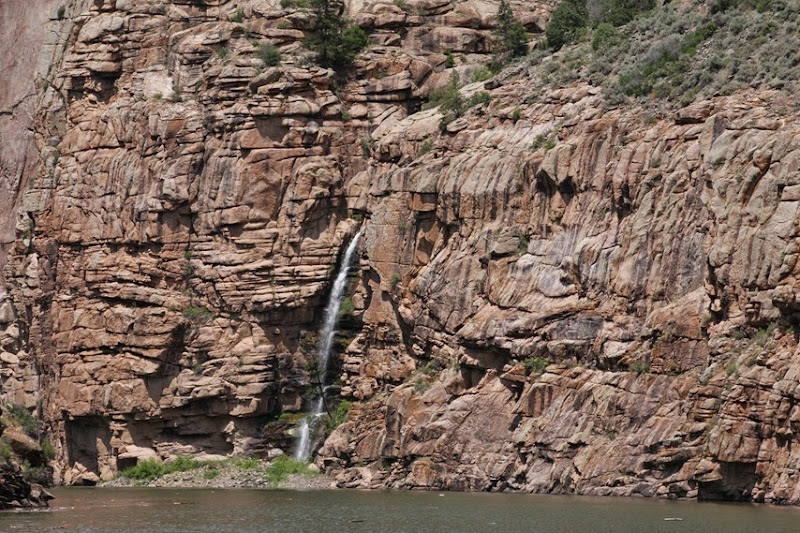 We passed underneath the Pioneer Point viewpoint that we had been to 2 days ago. 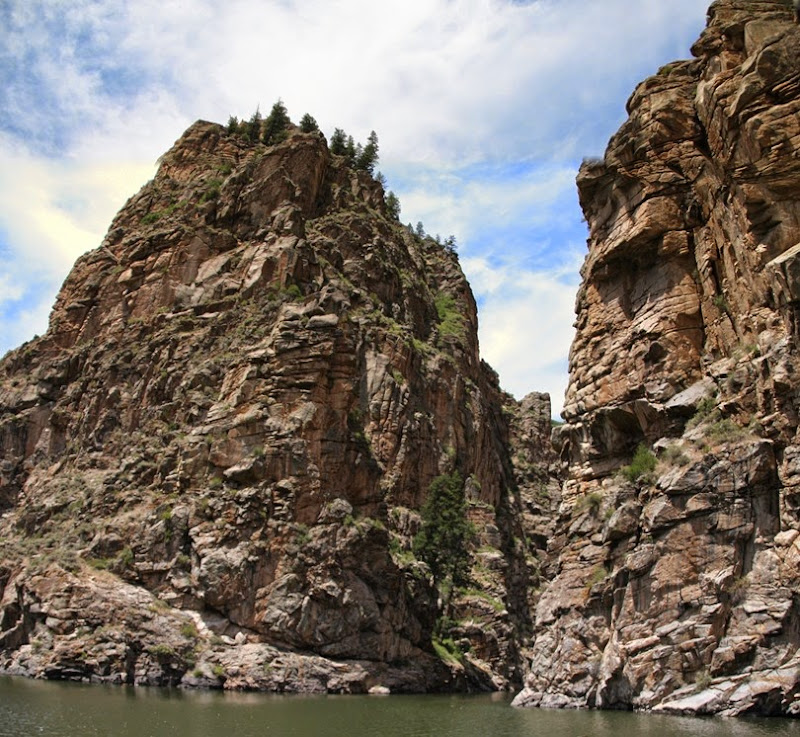 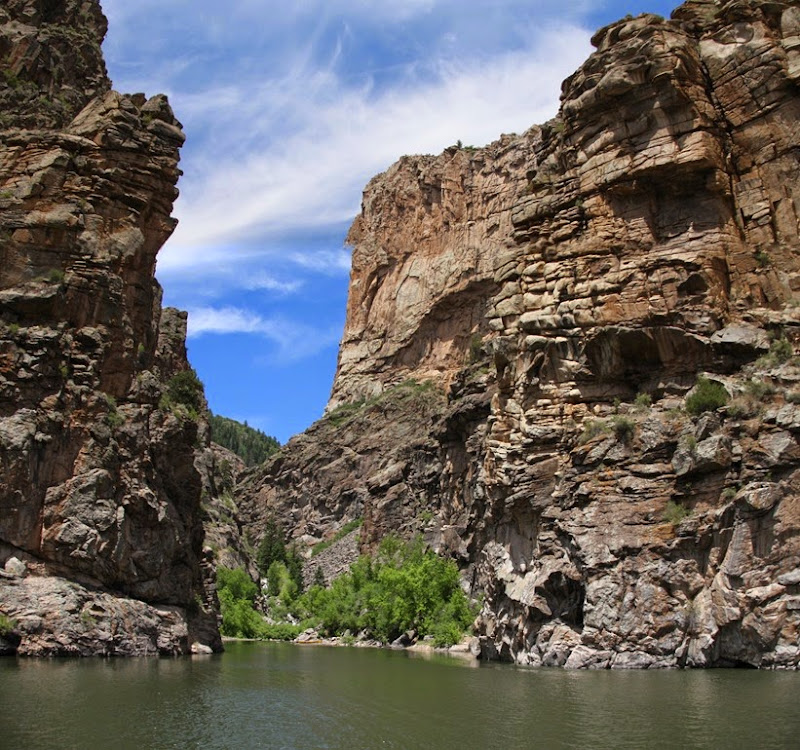 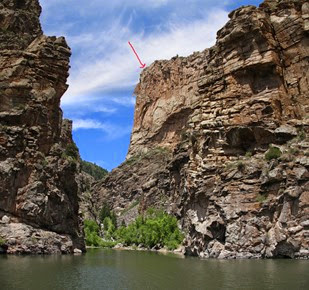 And a view of the Curecanti Needle at the junction of another side canyon. 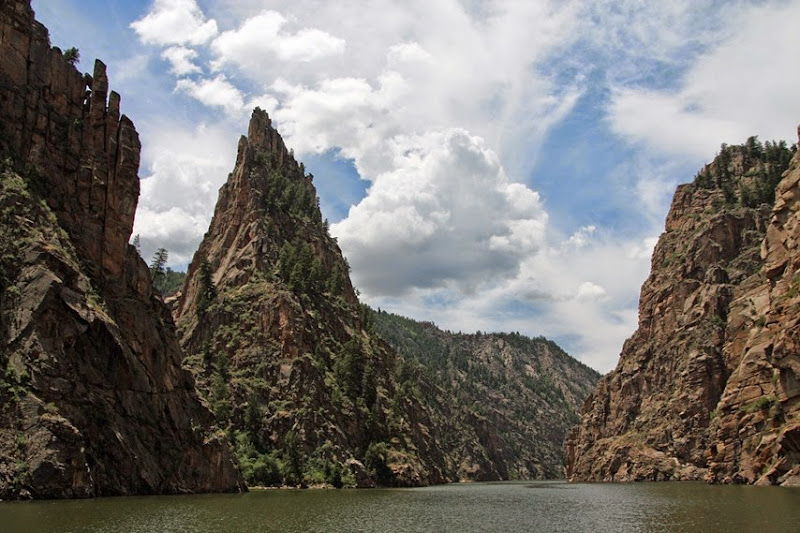 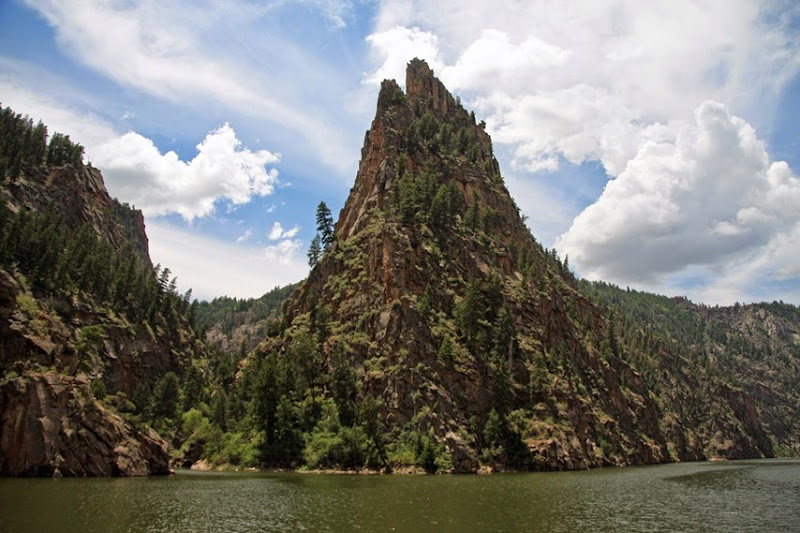 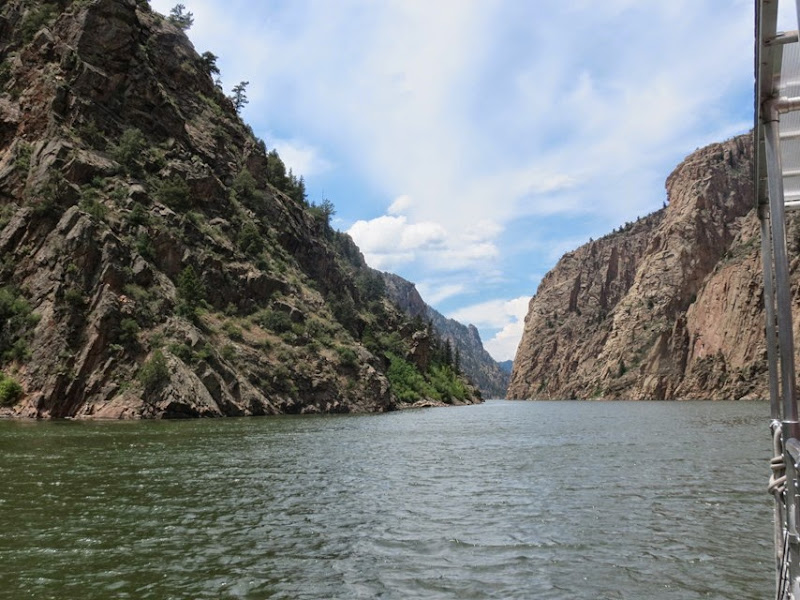 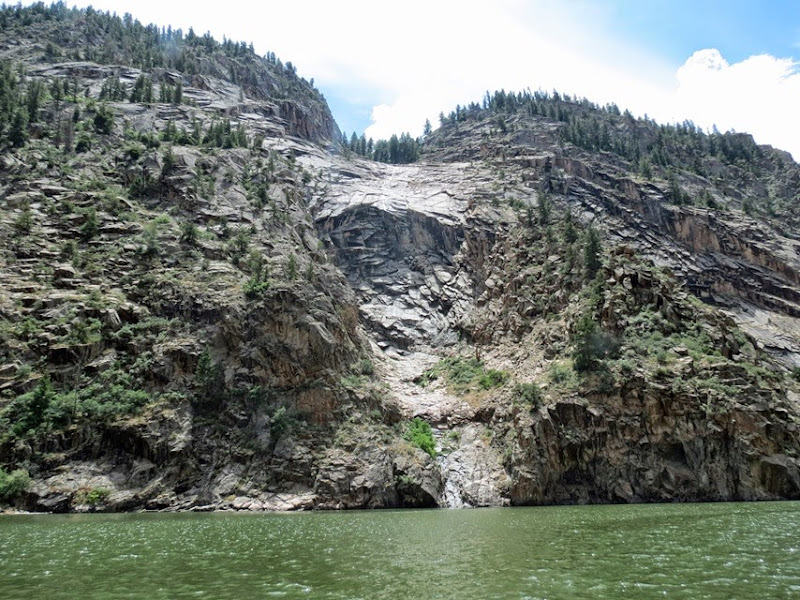 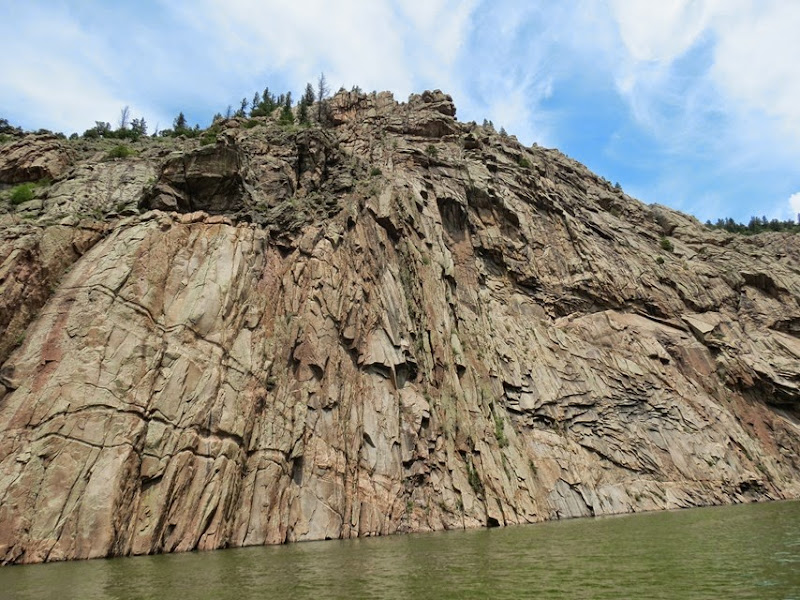 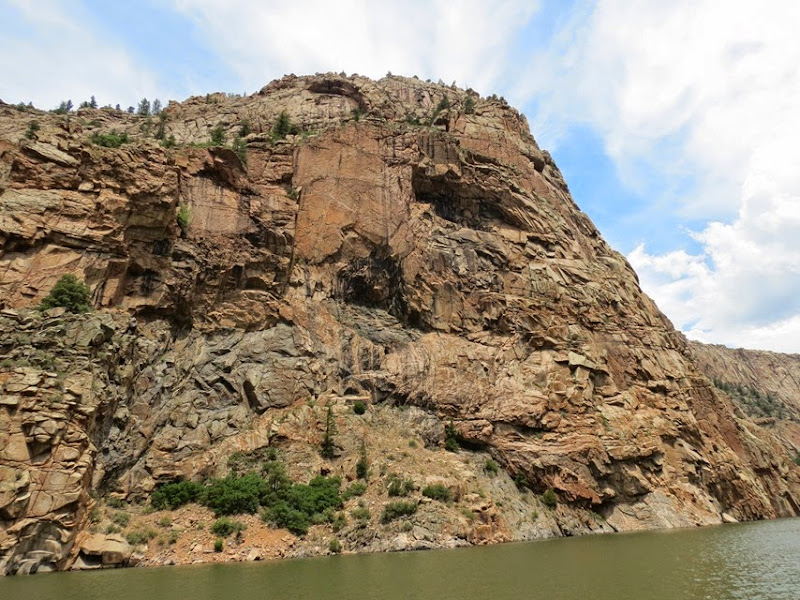 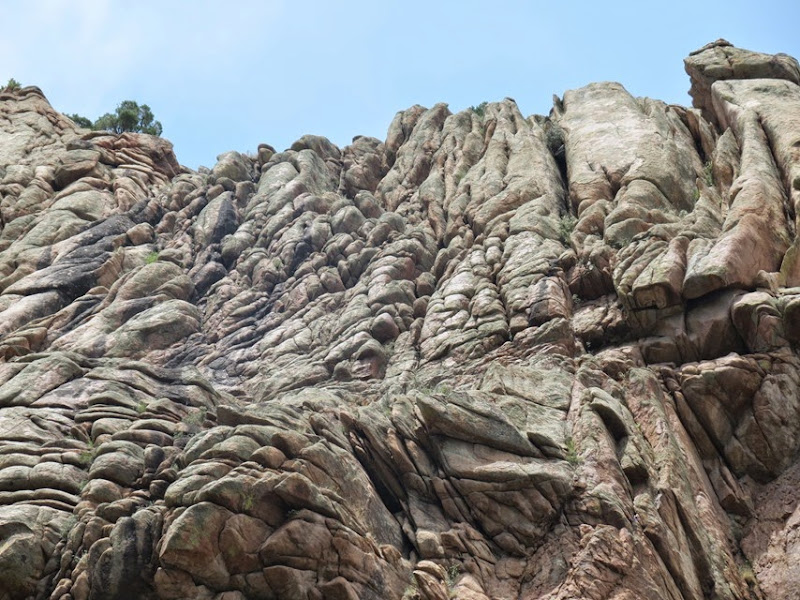 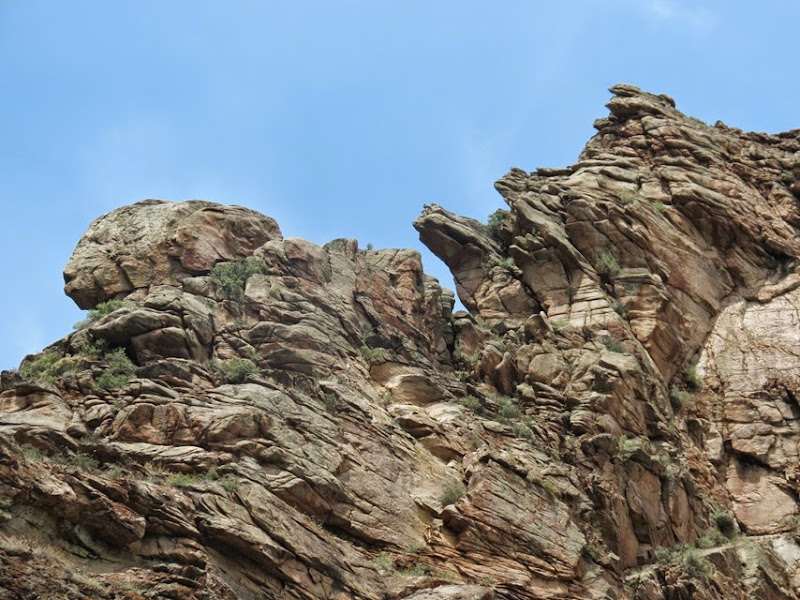 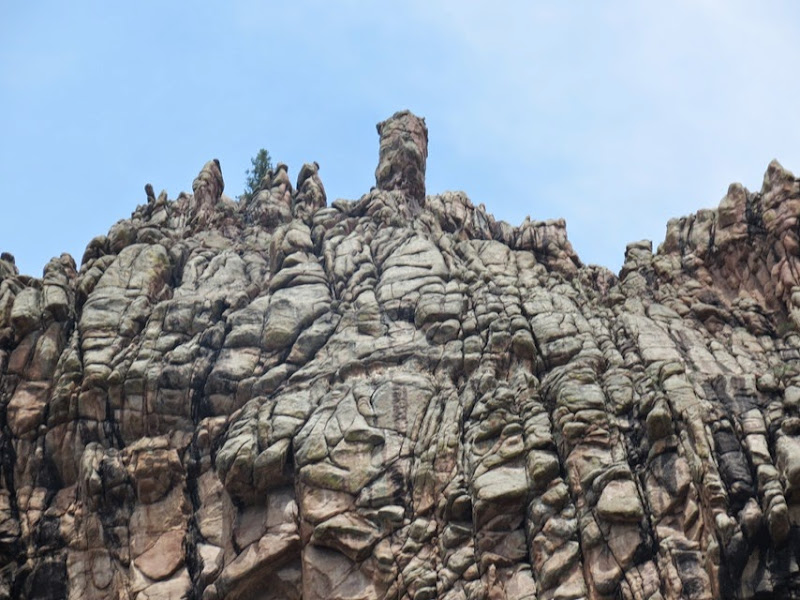 The height of the walls varied from about 800 feet near the start to 1800 feet at Pioneer Point. 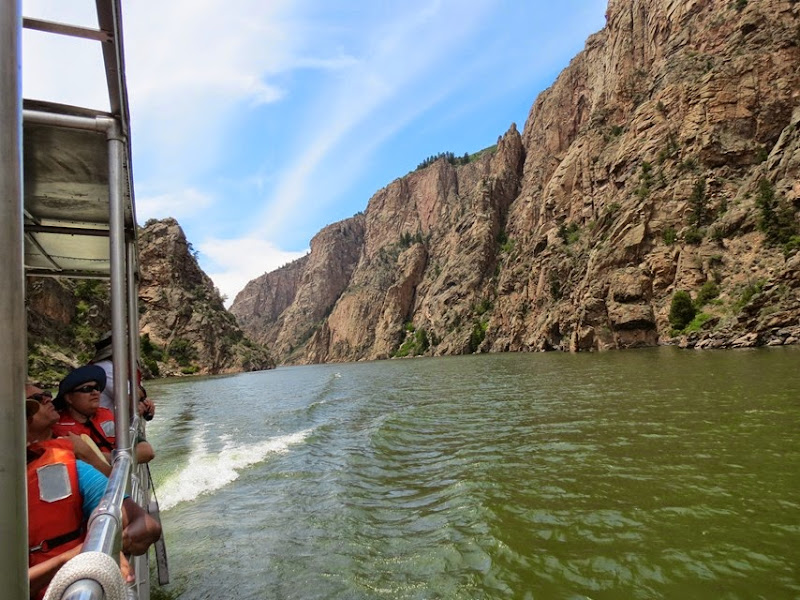 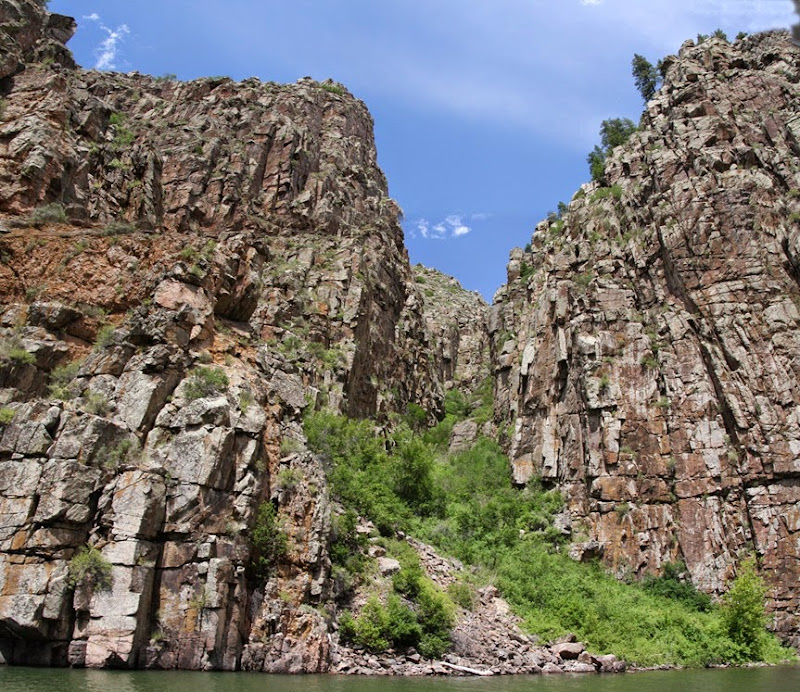 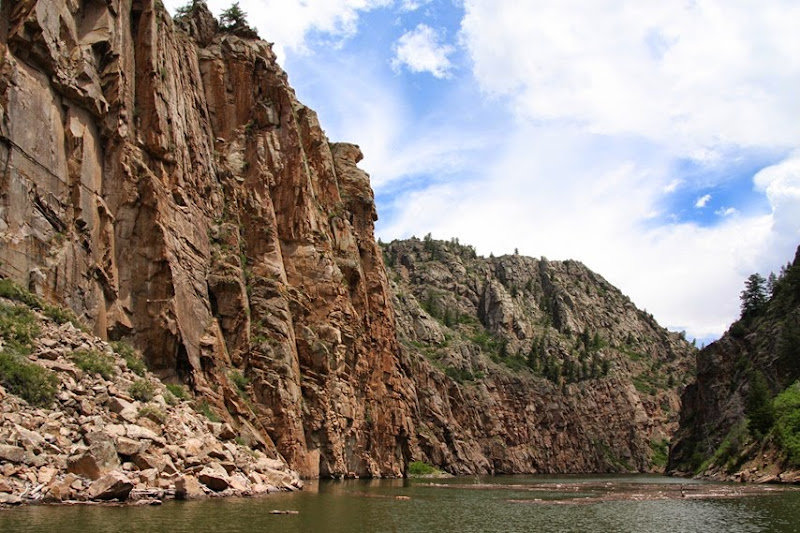 The logo for the railway had a view of the Curecanti Needle. 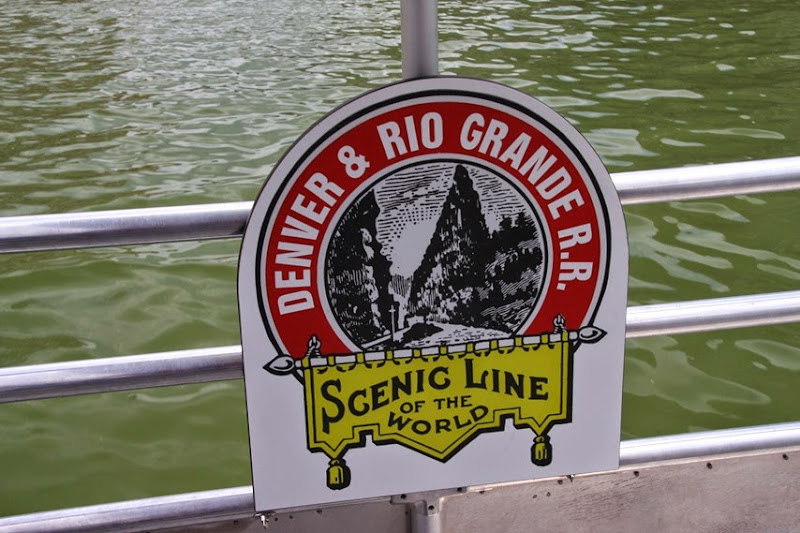 On the way back we got the same view. 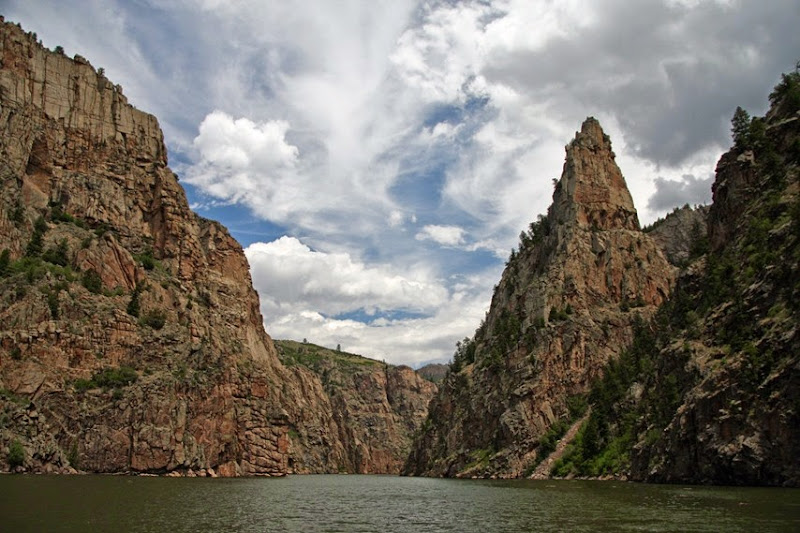 The forecast had called for afternoon thunderstorms. We could see the dark clouds off in the east. 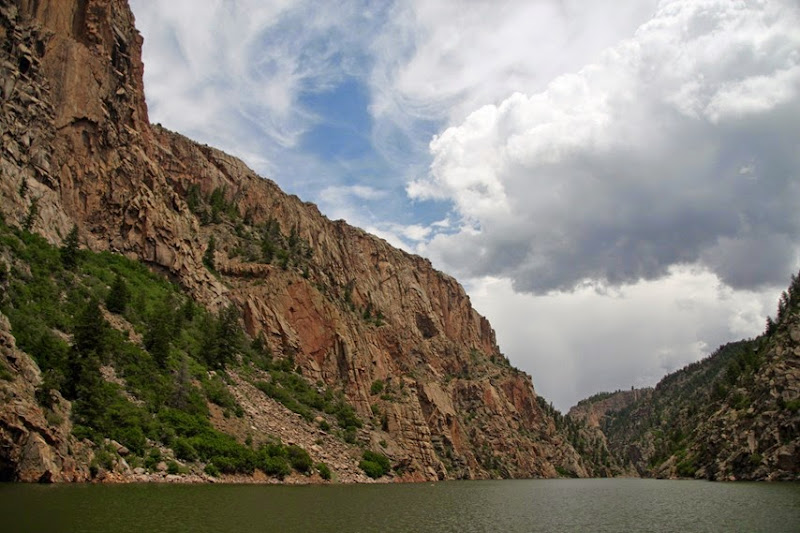 They never hit us until we were back in the RV. Even then it just really really windy for a short while and we got some big drop rain but not even enough to completely wet the RV pad.

I think we are just on the edge of the range of the storms. We are moving farther east tomorrow and the forecast calls for them every afternoon.

After landing at the dock we all trooped back to the stairs. 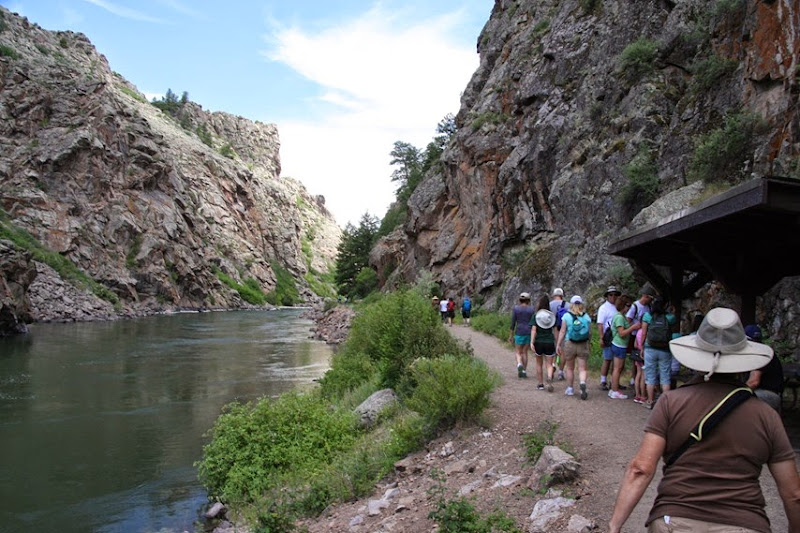 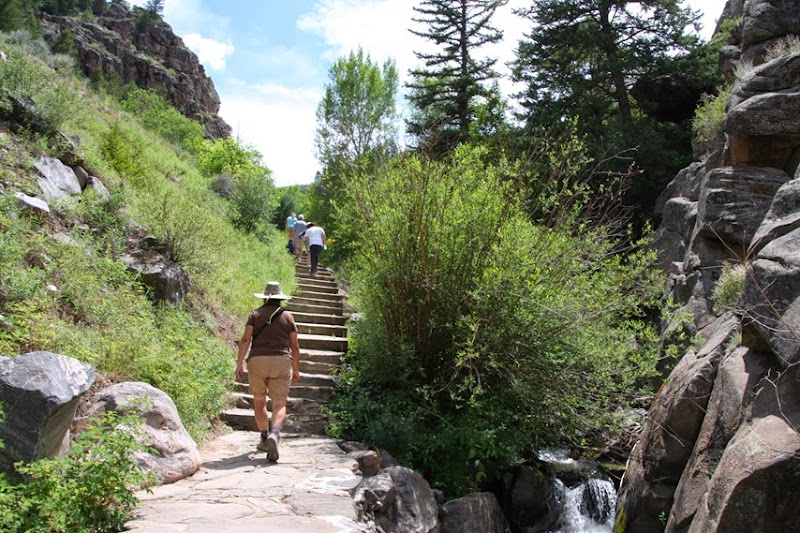 A pretty good deal for only $16 a person.