Originally the plan this year had been to head out to Vancouver Island and southern BC. I actually spent about 3 months gathering information and planning this trip. However due to some family matters that could cause us to have to come home quickly I decided that a 9 day drive back did not qualify as “quickly”. So now I have a head start on planning next year’s trip.

Instead we are going to hit some of the eastern states. From there we should be at most a 1 or 2 day drive from home.

We are going to start in Great Smokey Mountain National Park in North Carolina. Next we will slowly work our way up the Blue Ridge Parkway ending up in Shenandoah National Park in Virginia. Then we will move on to checking out some of the state parks in central and eastern Pennsylvania. Finally we will explore the Finger Lakes area of New York state before heading up to the cottage for the August long weekend to see some of our family. After that the plans are sort of up in the air but I tentatively hope to spend September poking around Michigan.

I had brought the RV down to the house from the storage lot about a week ago. I didn’t really have any major things to do to it but Jennie has had a very busy week so we took our time loading all the non last minute stuff. Yesterday we did our final packing and spent the night in the RV.

It was a great day to be travelling. Sunny and very little wind. After a few last minute hiccups we managed to get away at about 9:30 am. 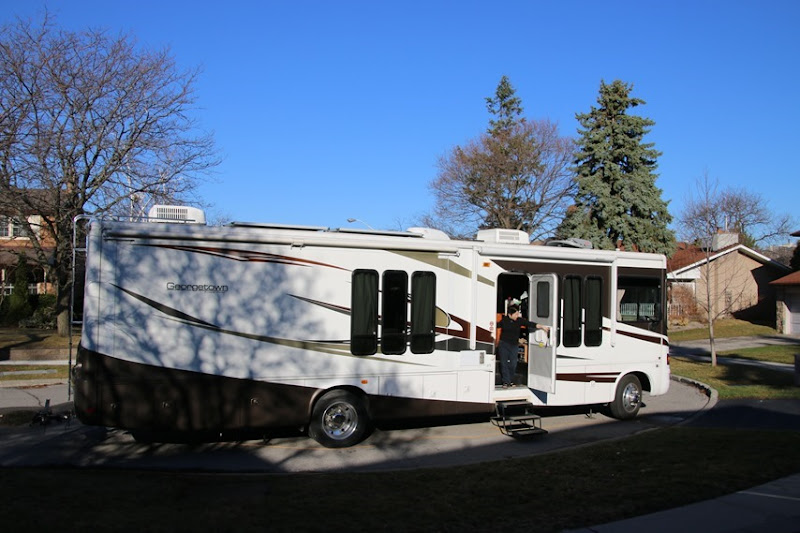 The drive to Sarnia was uneventful. As I have said before I prefer to cross the border at Sarnia rather than Detroit because it is less busy and the officers seem more easy going. It is also really easy to get in and out of in the RV.

The Blue Water Bridge across the river in under repair with one side being closed. There was so little traffic that there was no slow down at all. 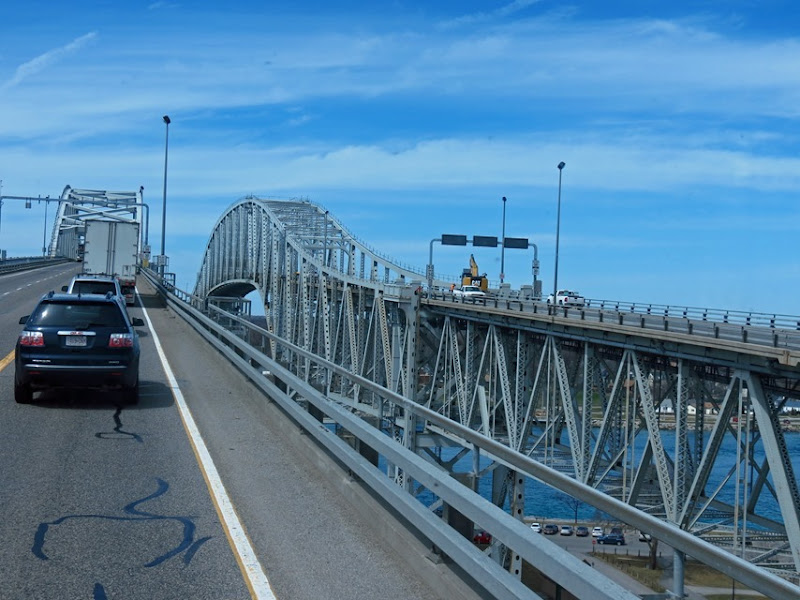 In packing the food in the RV, Jennie decided to try and see what we could get away with taking across the border. We told the officer exactly what we had and he said that the chicken and the bell peppers would be a problem. We were told to pull over so they could go through the RV. We had to wait inside while it was searched. He only took the chicken (possible bird flu) and the bok choy (he said because it was out of season??). He didn’t take the peppers. When we asked why he said that they were worried about bugs in them and since Jennie had already chopped them up “If you had found bugs in them you would have thrown them out yourselves”. From now on we chop up all our veggies.

Heading down through Detroit we saw electronic signs saying that the Ambassador Bridge was closed and that you should take the tunnel. I guess the trucks can’t use the tunnel because they were backed up for miles just parked on the highway waiting for it to open. I would guess that there were several hundred trucks waiting in each direction. There was a police car blocking each off ramp.

I am sure glad we went via Sarnia. 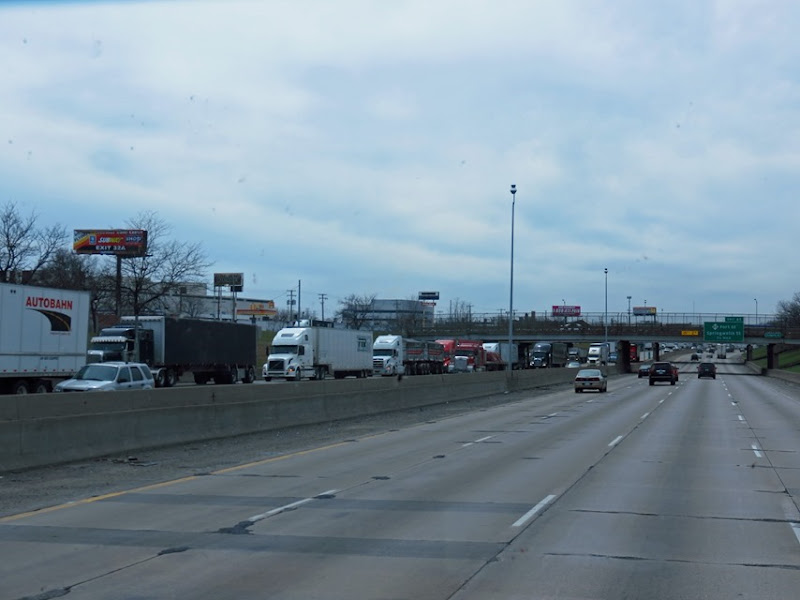 One dangerous thing saw was that the line was so long that the trucks blocked some of the on ramps. They would leave a small gap but it meant that people merging had to stop, poke their nose out between the trucks and somehow get out with cars flying by at 65 mph. Scary.

Other than that there was very little traffic all day.

We are now tucked into the same Wal-Mart that we used on our first night last year. No internet to be found. 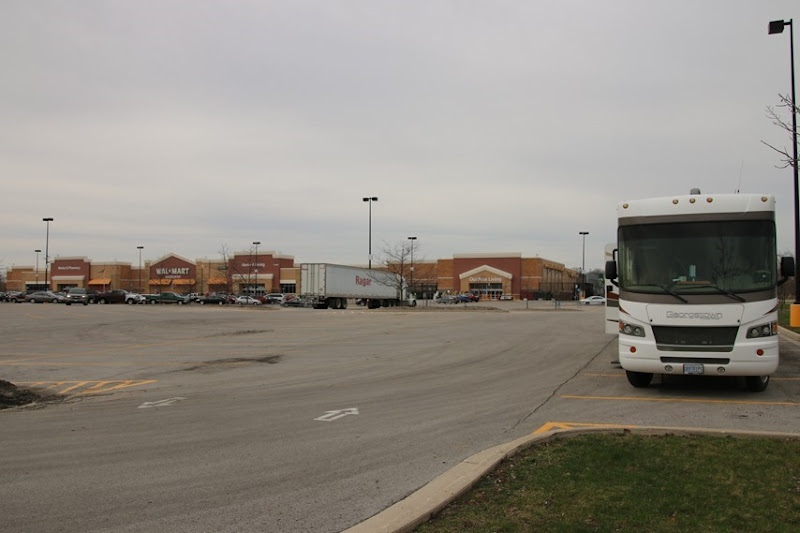 We only saw a few RVs on the highway but there is another one with us tonight.

Ah, the perks of Walmart camping. We got to listen to some trucker run his engine all night. Ear plugs helped but it was not a good night.

When I attempted to pay for our gas fill up this morning my card was declined. Strange since I had just used it in the Walmart the night before. I paid with another card and then called Visa loss prevention. After waiting on hold for 25 minutes, I find out that they have flagged my card as “compromised”. They wouldn’t go into much detail but will have to send me a new one. Once we get to our first real campground I will try and get it sent there. We are staying for 2 weeks so it should get there in time.

I forgot to call Visa about our trip and tell them where we would be. I am not sure if that was the reason or it was the unusually large charge for gas (the RV has a BIG tank).

Moving on, the drive down I-75 through the rest of Ohio was relatively easy but that highway seems to always be busy. In the middle of nowhere, far from any town, on a Wednesday morning the traffic was just constant. 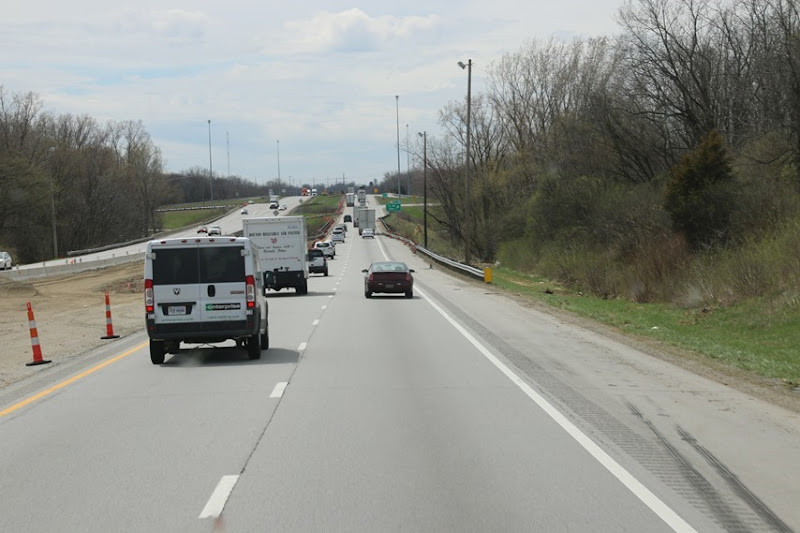 Going through Cincinnati was a bit of fun. I-75 seems to really snake its way through the middle of town. Lots of turns, very narrow lanes, construction and lots of big trucks kept my hands glued to the wheel.

Whereas Ohio is relatively flat, once we got into Kentucky we were constantly climbing up hills and flying down the valleys. The change was very abrupt. 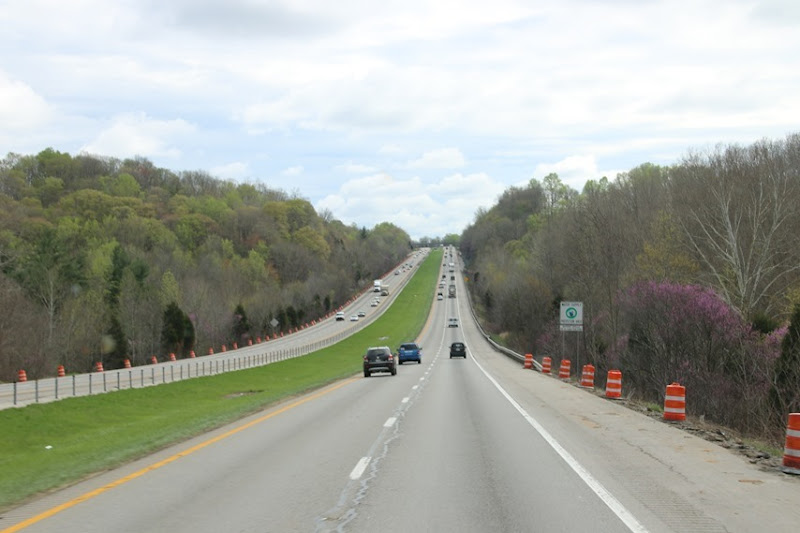 Even though it was a kind of dull day it was nice to see, what we think are, all the cherry trees lining the road full of blossoms. 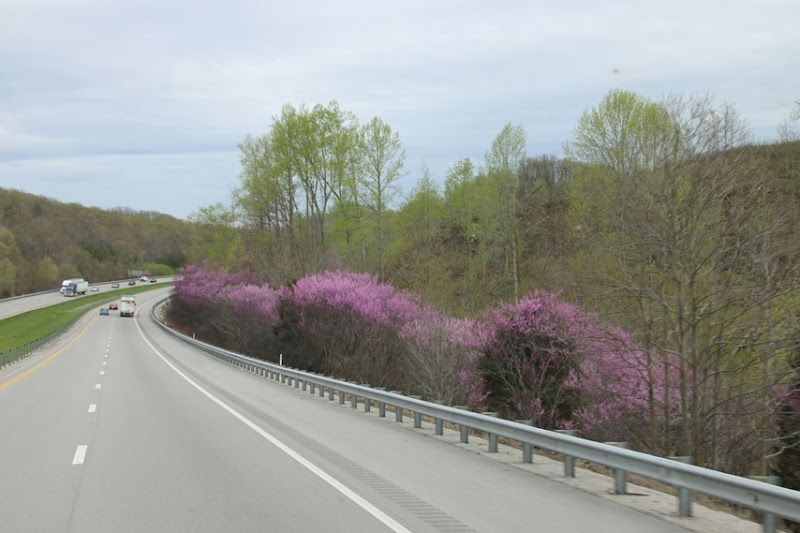 You know you are in red neck country when you get passed by an RV hauling a jet powered school bus. 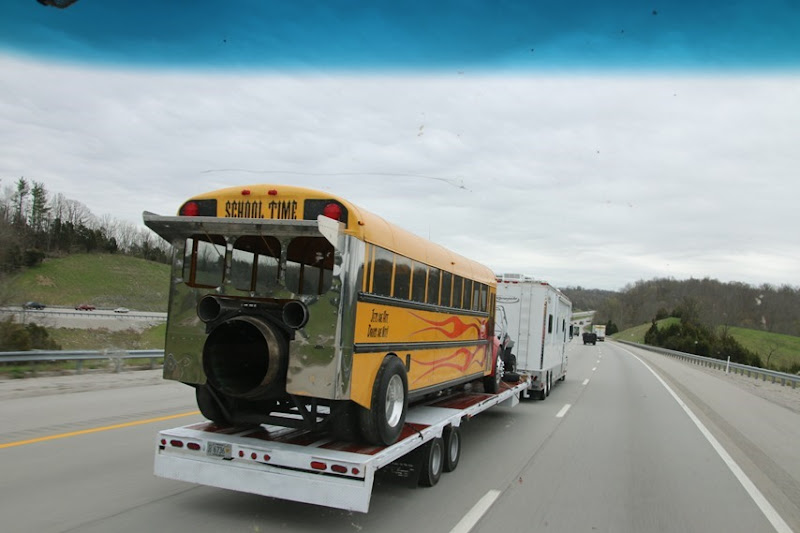 We are at another Wal-Mart in London, Kentucky. This one is in a much more built up area than the last one so we will see how noisy it is. One thing I will say is that a lot of people around here don’t seem to care about using mufflers on their cars. 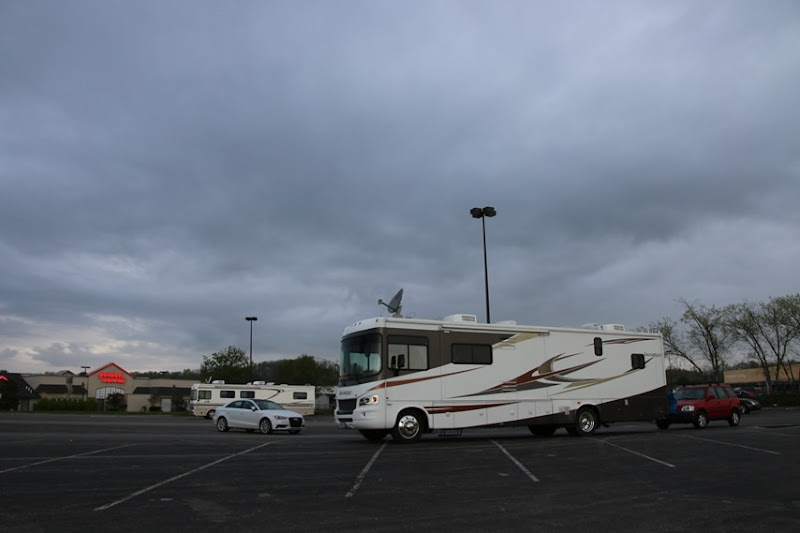 The skies look a bit threatening. The forecast for the next while is not good.

Note to self, always wear ear plugs when parked at a Walmart near a major truck route. We started the night with no trucks and in the morning there were about 7.

A pretty blah day today with on and off rain, sometimes quite heavy. Still lots of deeps valleys and hills to climb as we entered Tennessee. 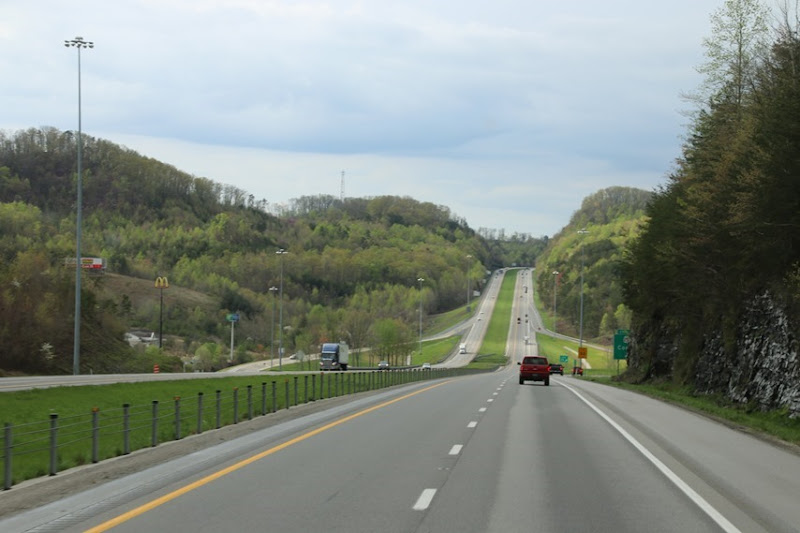 As we got close to our campground we first had to drive through Sevierville and part of Pigeon Forge (home of Dollywood). All I can say is WOW. Tourist trap after tourist trap. We will have to go back in the CRV and take some pictures.

We are now safely planted at the Cove Mountain Resort in a much nicer country setting. The sites are set into a hill side with nice views across the valley. 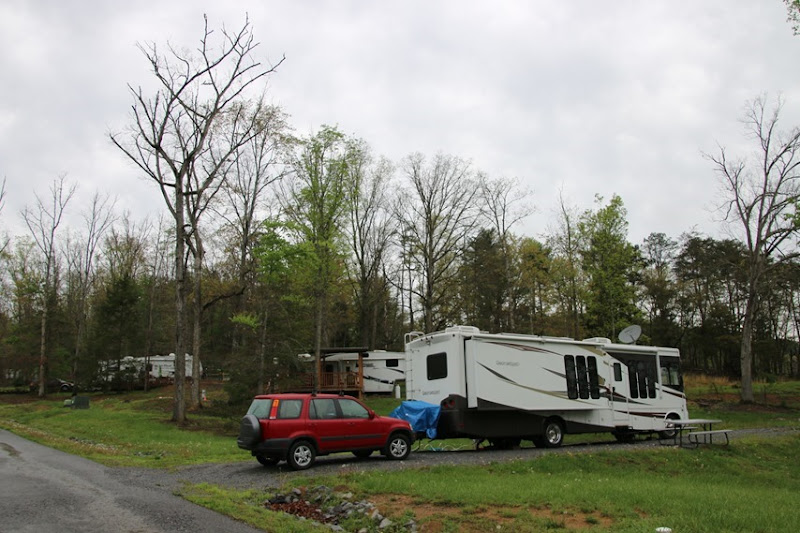 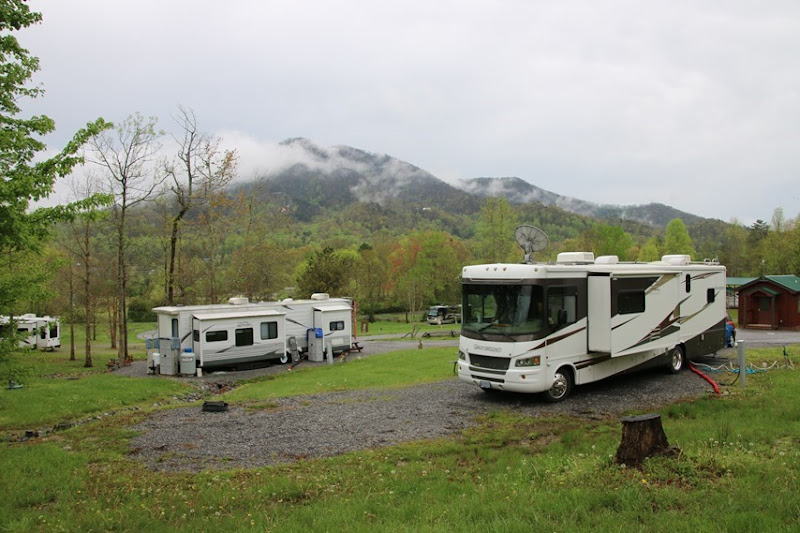 It looks like there are some nice homes with views on the far side of the valley. 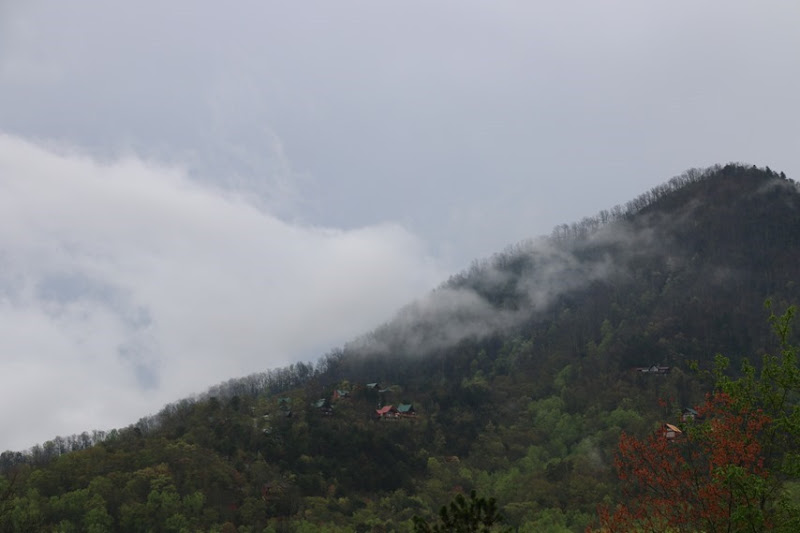 The view from our front window. 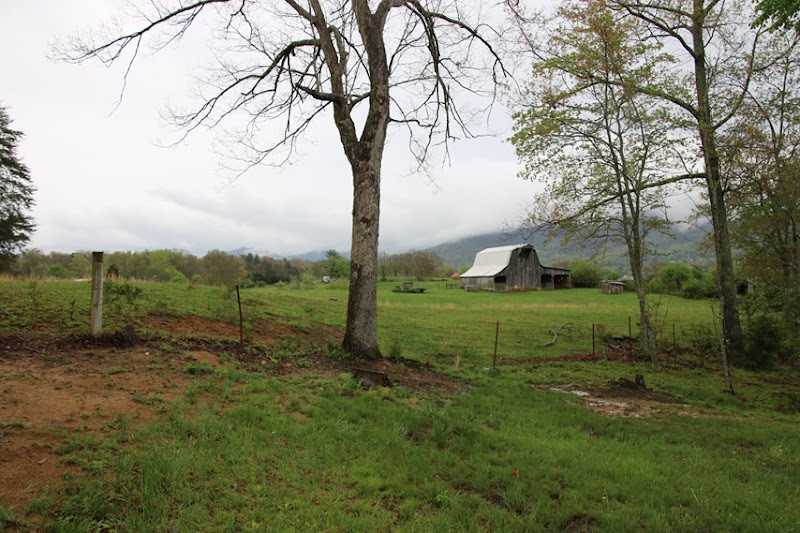 Most of the sites here are occupied year round. There are only a few for transients like us. 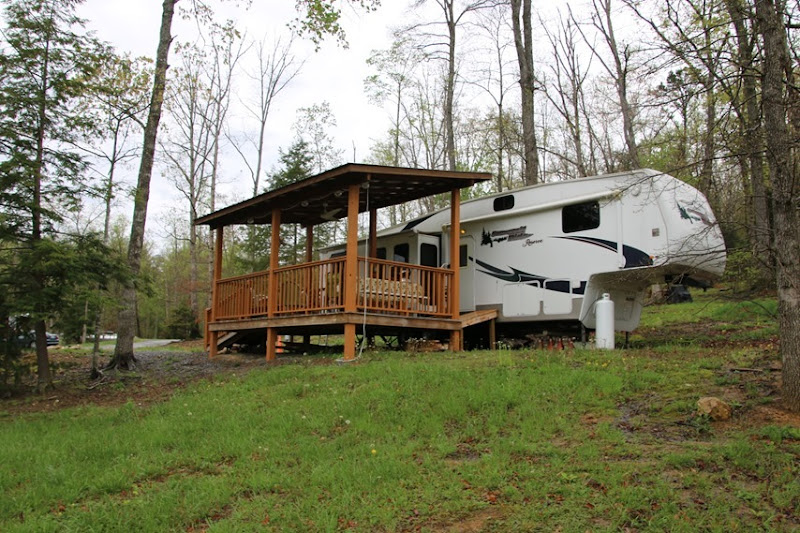 I need one of these shelters at the cottage to stop the acorns from banging on the roof. 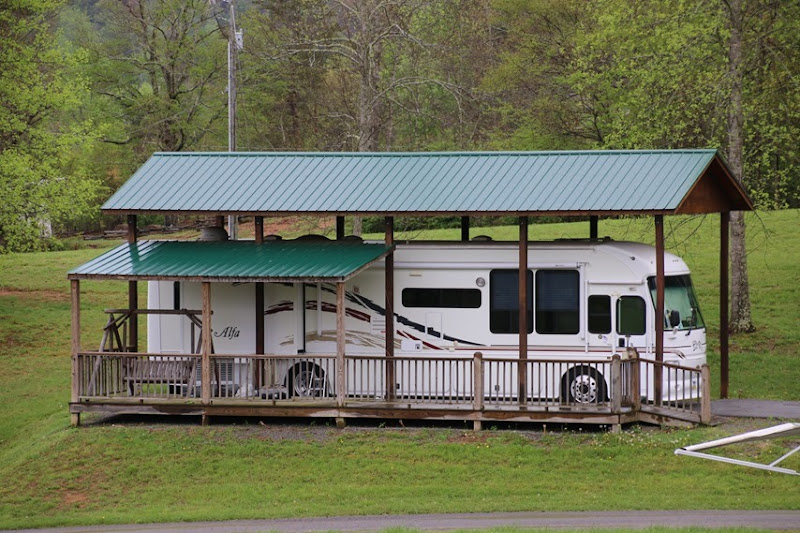 We are here for 2 weeks to explore the western side of Great Smokey Mountain National Park. This is a bit more than necessary but I am sure we will need more than the normal number of days off for weather and just getting back in hiking shape.

The weather for the next few days looks kind of wet but the forecast improves with sunny days with highs in the upper 20’sC.