Today we did the 5 mile round trip hike to Abrams Falls in the south end of the park. The forecast called for the possibility of afternoon showers but it was bright sunshine in the morning. We decided to take a chance and not waste a possibly good day. We sort of blew the timing though. The sun was out on the hike in but it got cloudy and threatened rain while we were at the falls. Then it got sunny and clear again as we hiked out.

The trailhead is off of the 11 mile loop road that runs around the Cades Cove area of the park. A cove here has nothing to do with water but signifies a large flat meadow between the mountains. A lot of pioneer families used this area to settle and farm so there are a lot of old buildings in the area.

The Cades Cove road is rather excruciating to drive. It is one lane, one way with a speed limit of 20 mph however it seems that most people go less than 10 mph. We could never figure out what people were looking at. Mostly it is just wide open old farmers fields. Our only guess is that they hoped to see some wild life. 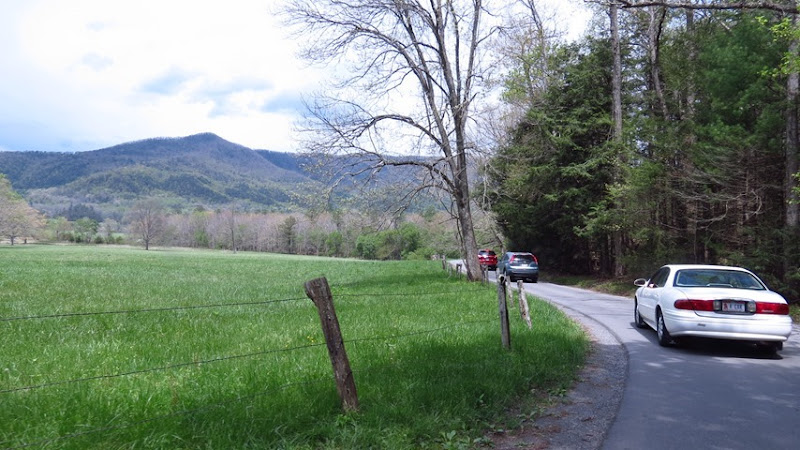 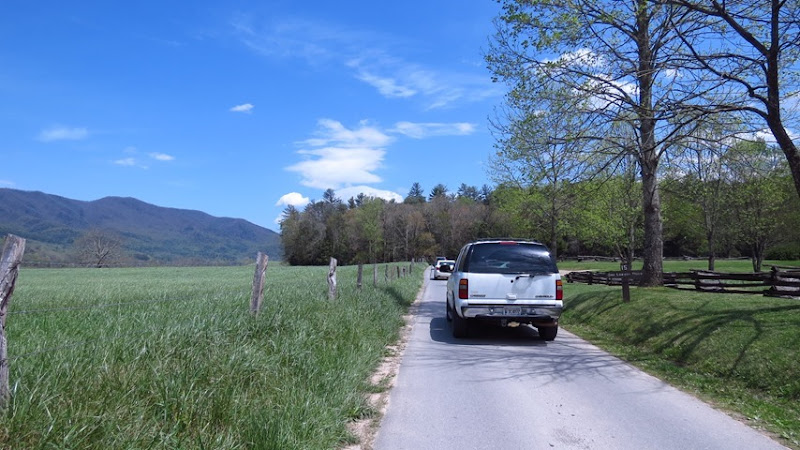 We did see one small deer which of course caused everyone to stop and block the road rather than pull off as they are supposed to. We also had to stop as this guy crossed the road (not a chicken but close). 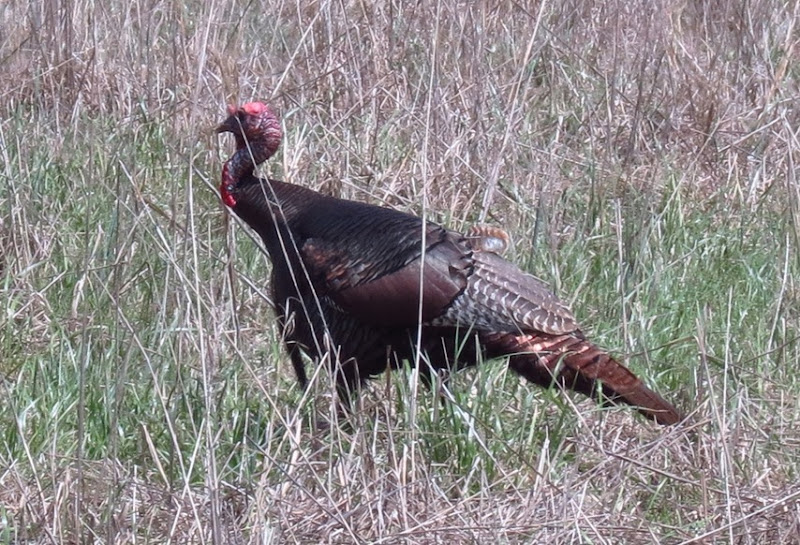 There are pull outs and parking lots at most of the old homesteads but they don’t really interest us.

Here is the GPS trace of the hike. 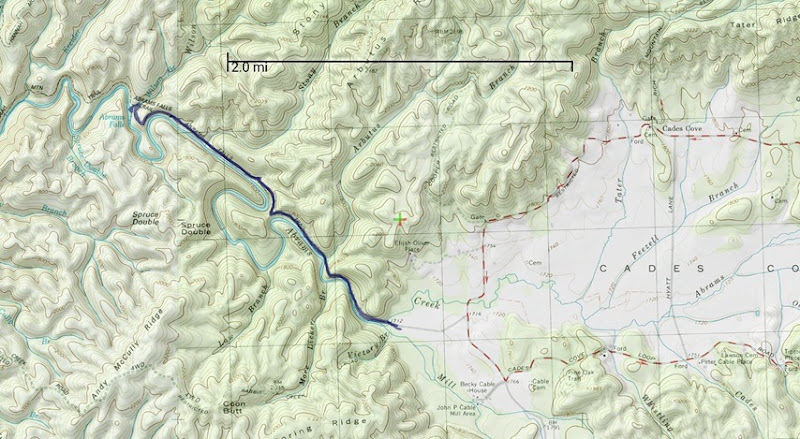 The elevation profile came out a bit weird.

It should be a mirror image but only the way out looks correct. We climbed up from the waterfall to a long flat and then went up and down two hills to get back to the parking lot.

There were only about 10 cars in the parking lot when we got there. The trail never seemed crowded. We got passed a lot as we tend to linger to look at the flowers and scenery along the way. 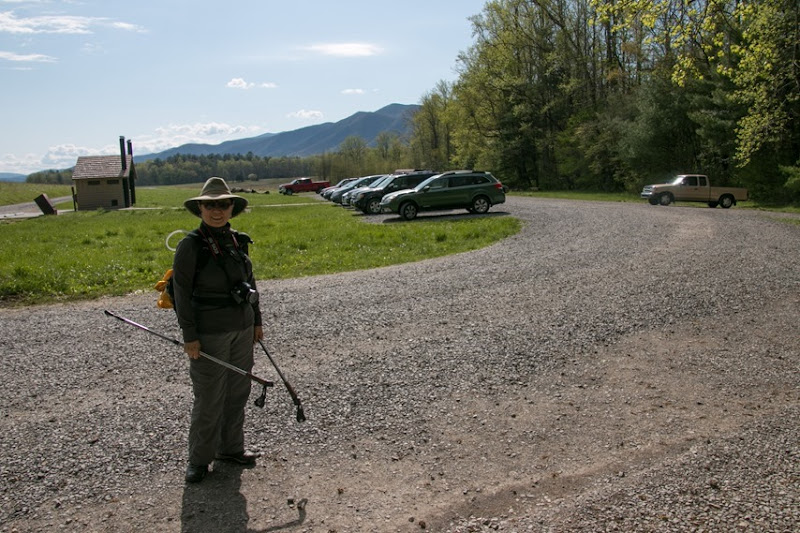 The trail mainly followed along the banks of the river except for the two times it looped away from us as we climbed over some ridges.

The pictures are from both going out and back. 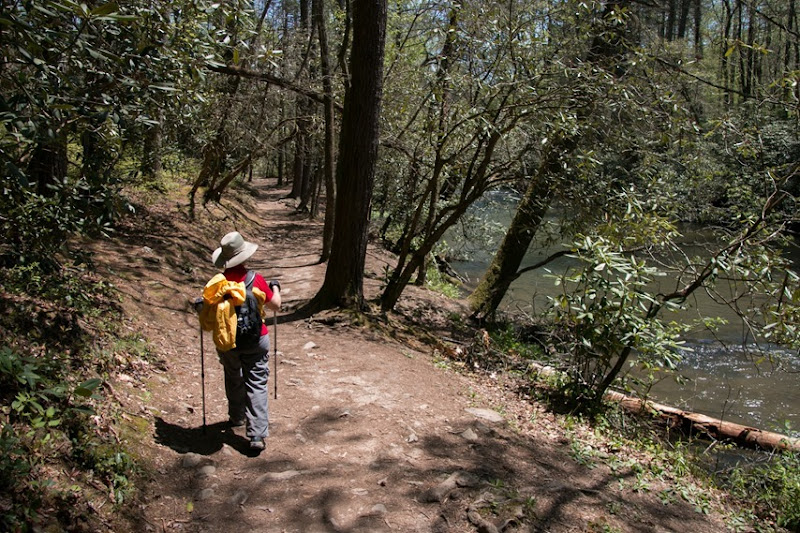 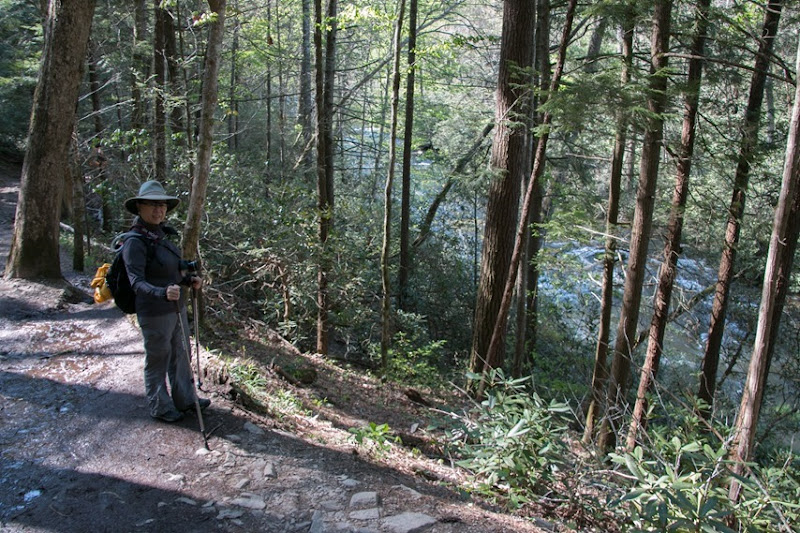 We had to cross a few wobbly bridges to get over some streams flowing into the river. 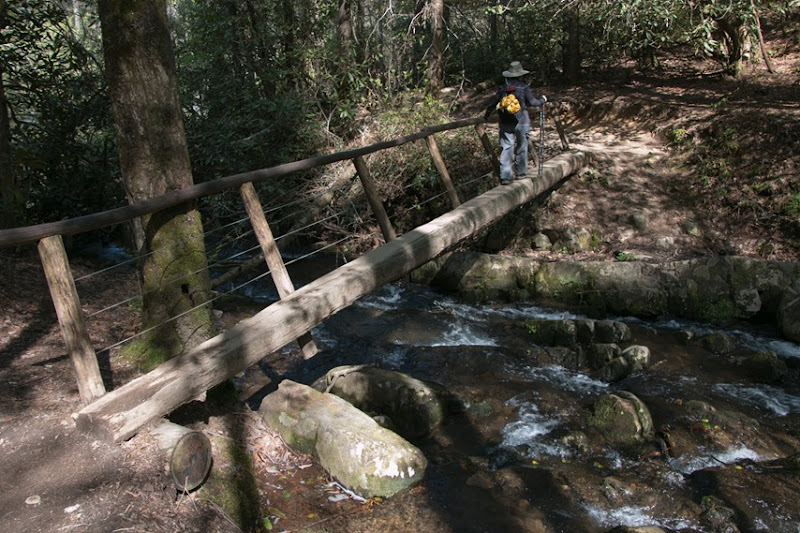 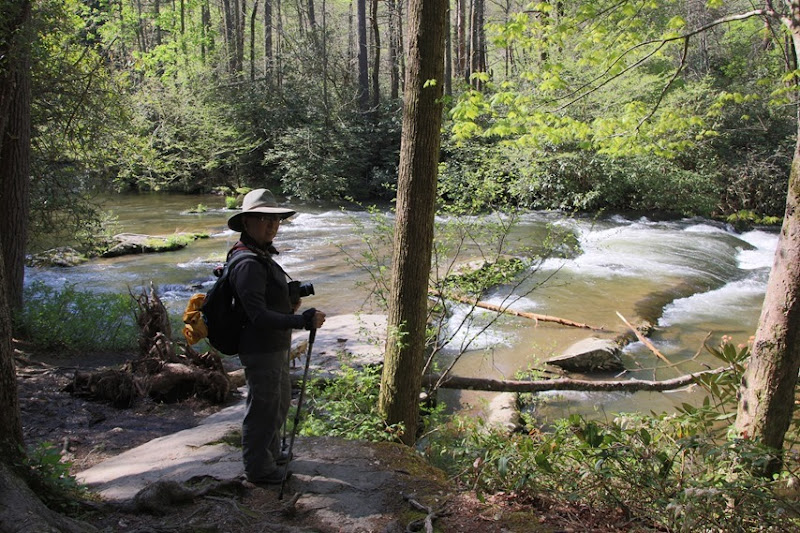 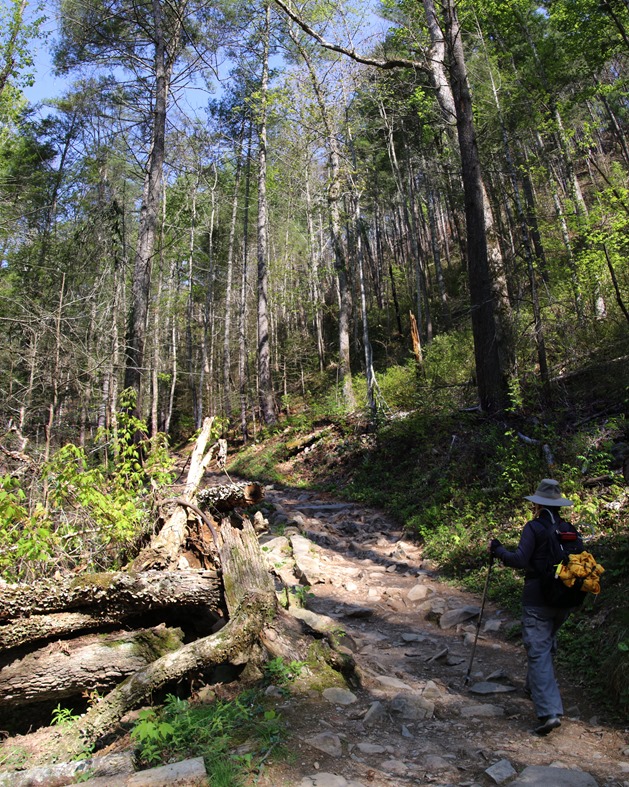 At one point we were a long way above the river. 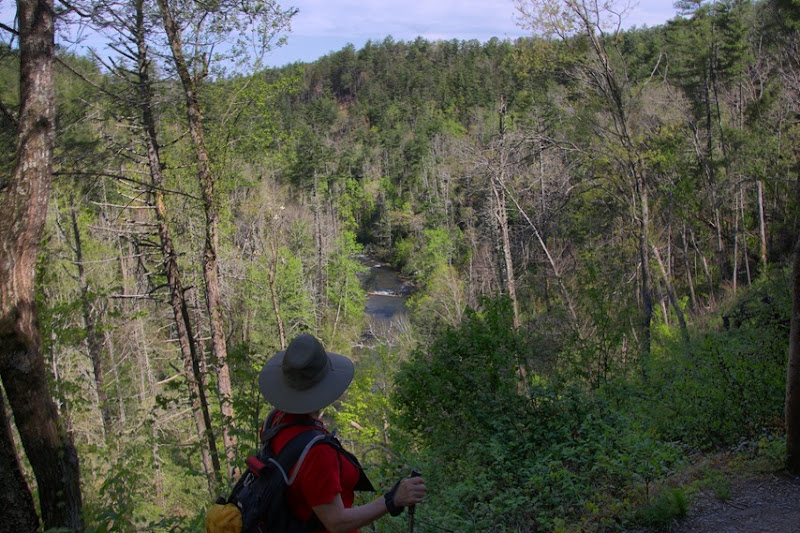 I got a quick shot of this guy before he flew off. 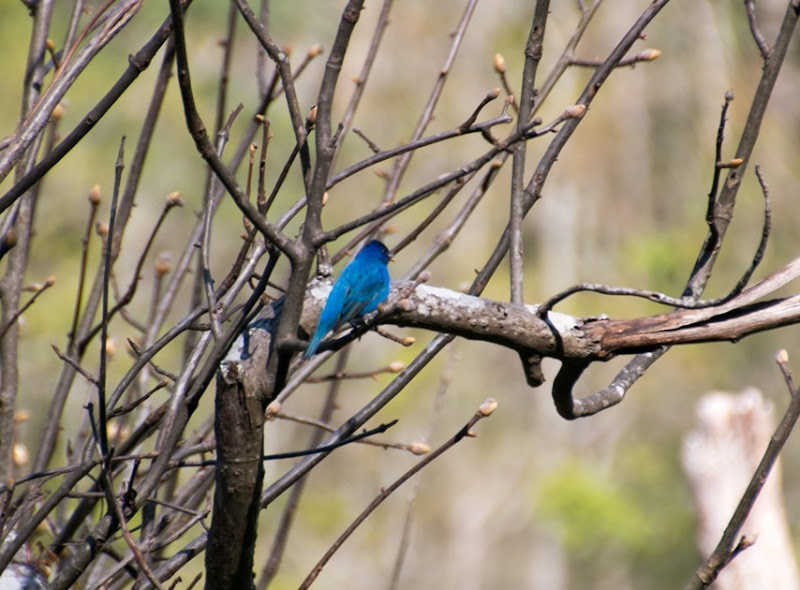 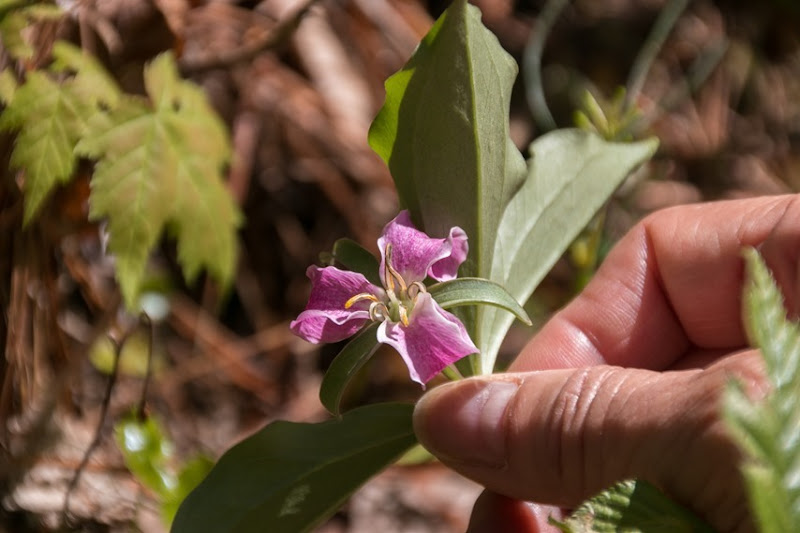 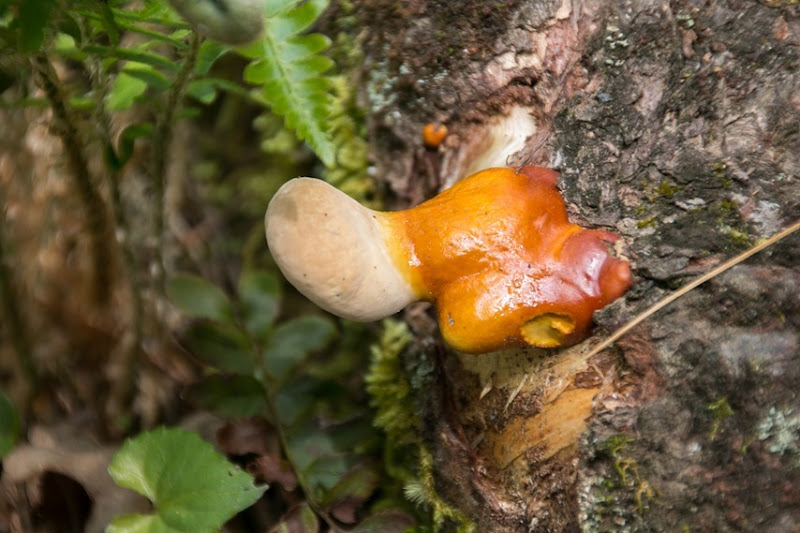 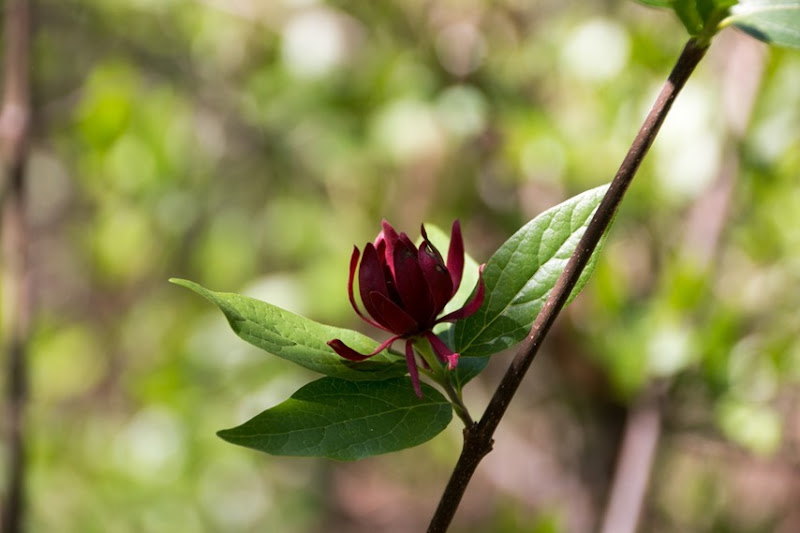 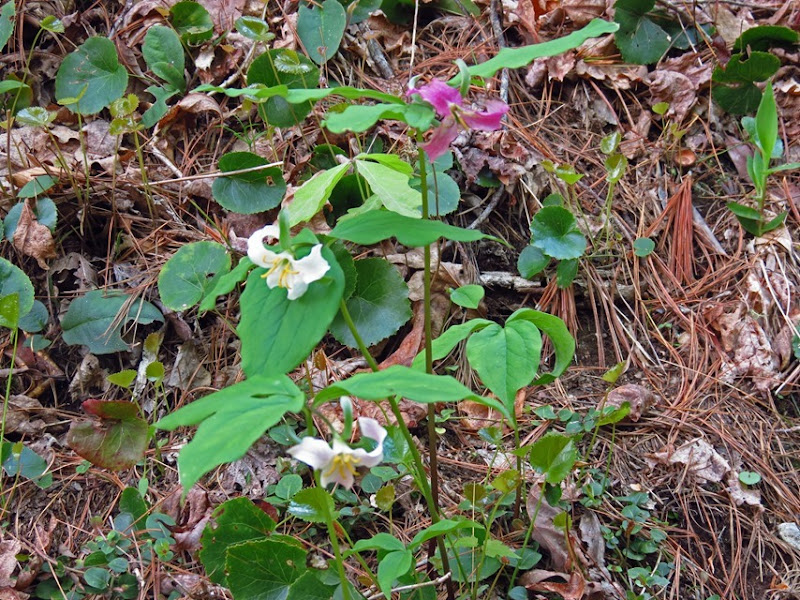 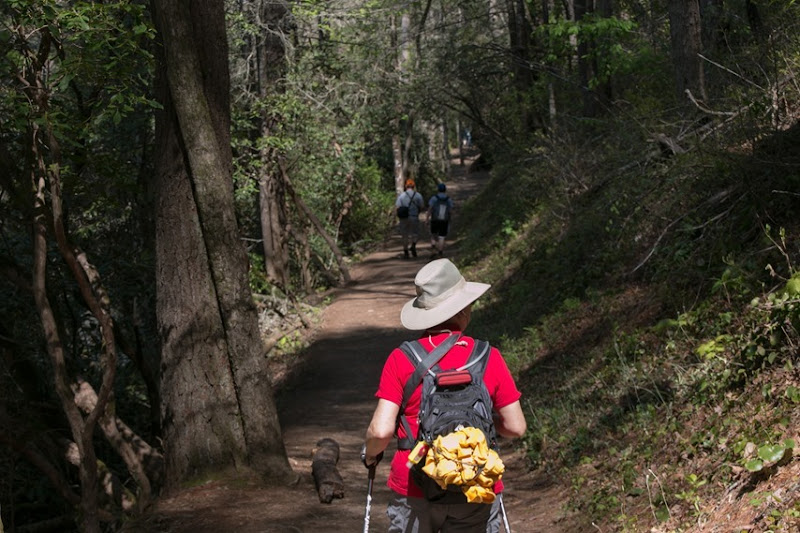 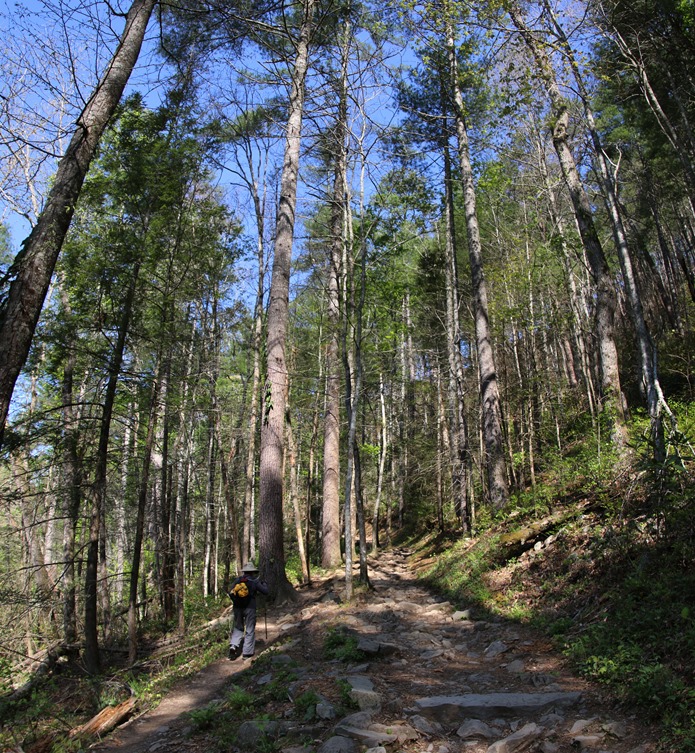 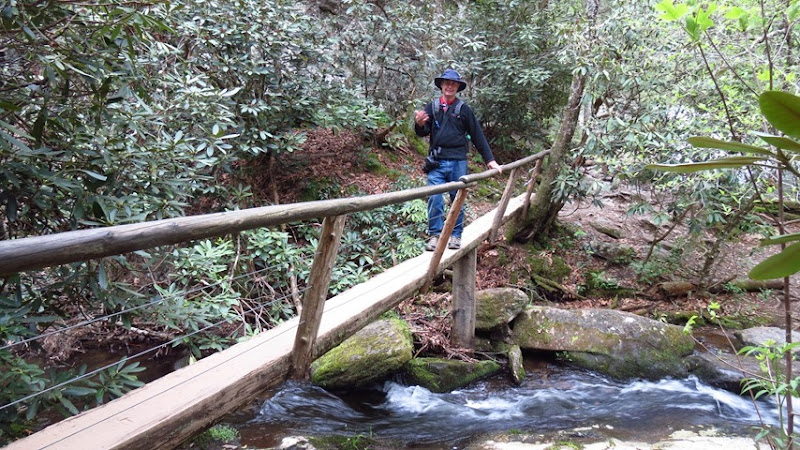 Abrams Falls is only 40 feet high but it has the largest flow of water of any in the park.

Notice how the skies have gone grey. 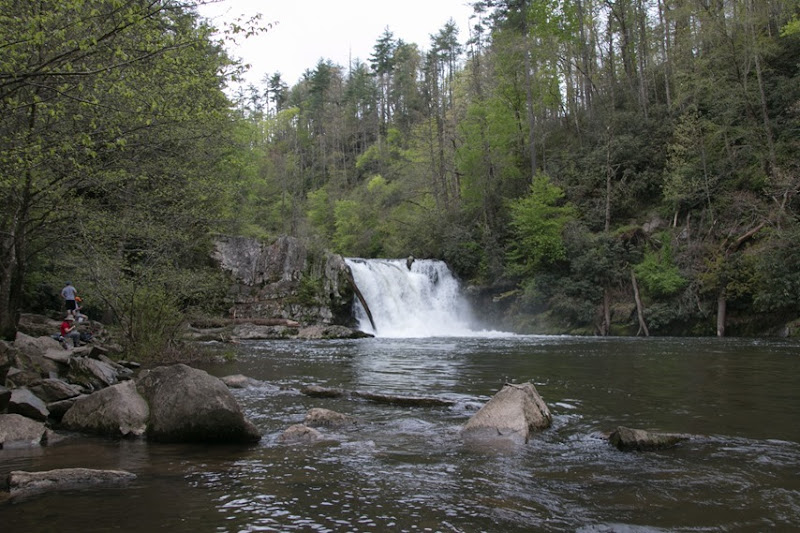 We found some nice flat rocks for our lunch spot. 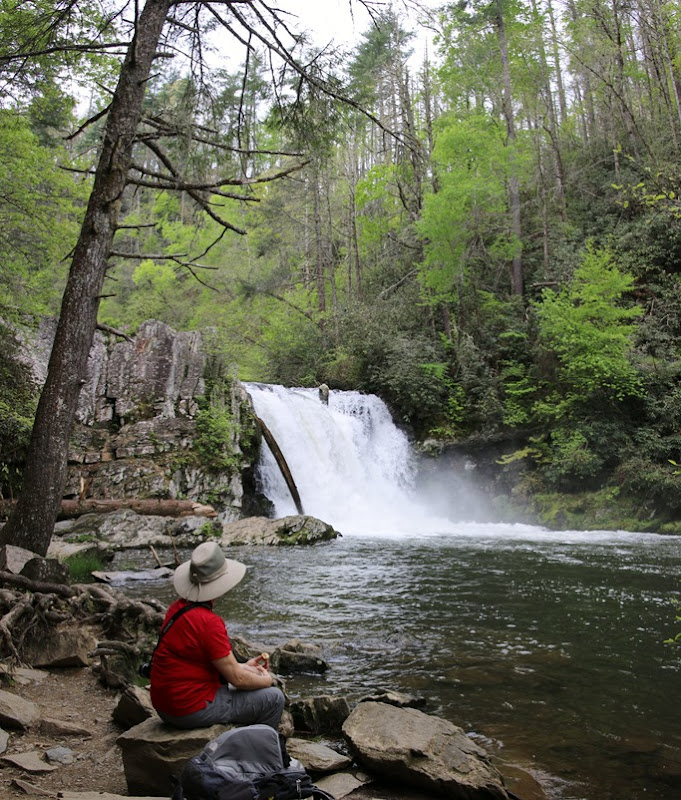 I always have to try and get close. It was quite easy as there were some big, dry rocks. 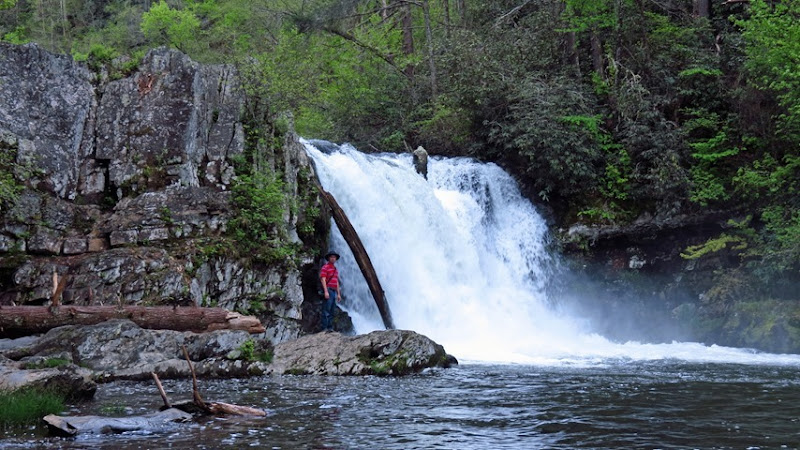 It was a bit cold by the waterfall. We put our jackets on for the walk back as it really did look like it was going to rain. Of course they soon came off for those hill climbs. 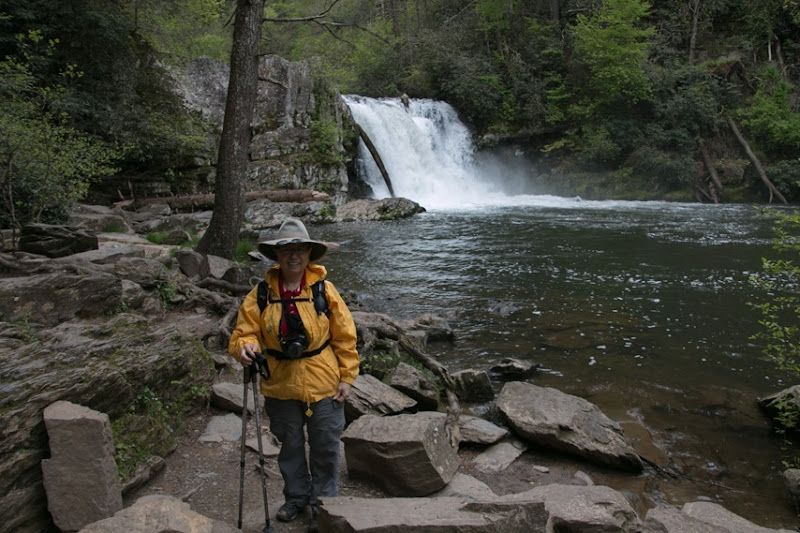 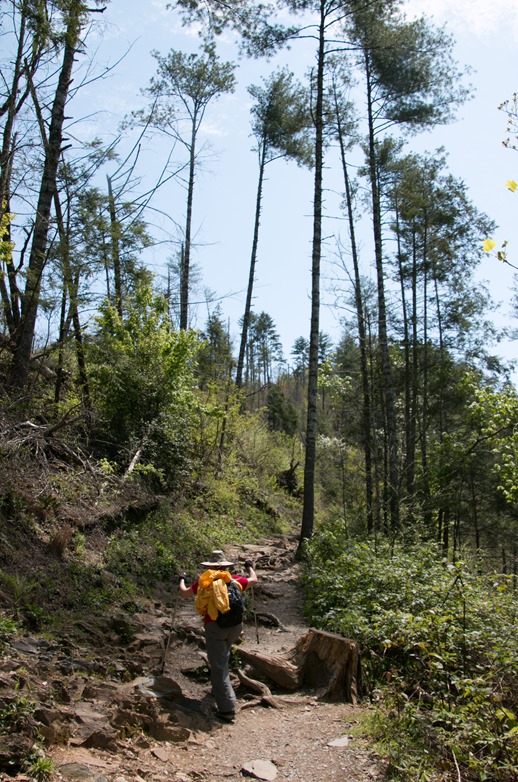 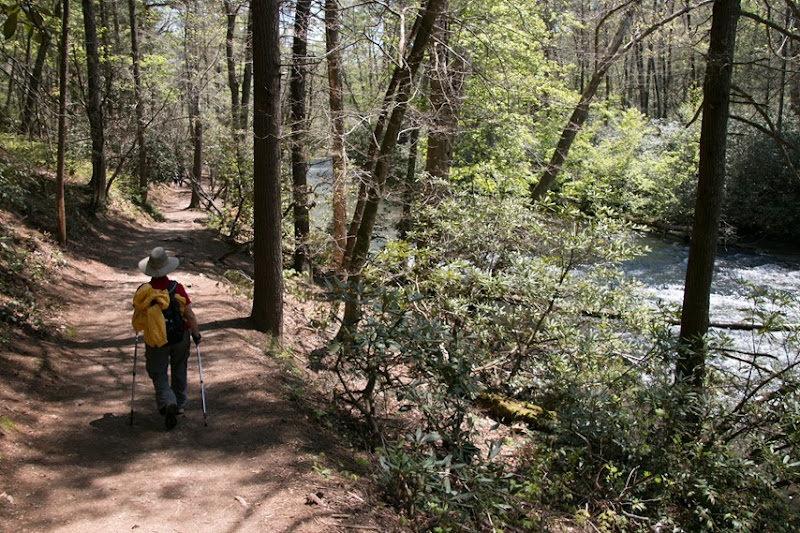 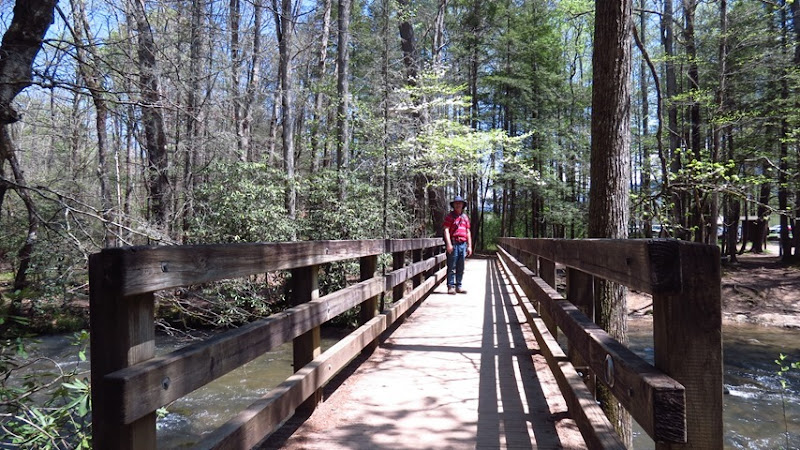 And back to the car. I think right now our limit is about 5 miles. We feel OK during the hike but it sure feels good to sit down at the end. 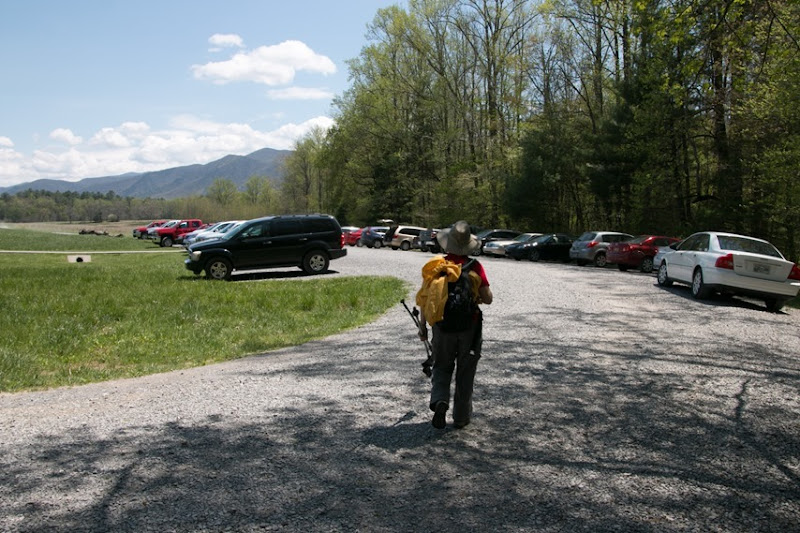 We got a few sprinkles of rain back at the RV around dinner time but I heard and saw some strong thunderstorms in the mountains during the afternoon.