It is time to head off on another adventure. This summer we are heading to Vancouver Island.

We are starting off in Victoria and then working our way up the east coast of the island with stops at Sooke and Tofino on the west coast. We will stay at 10 different campgrounds. Once we reach the top of the island we are going to leave the RV and car and take the ferry up to the Queen Charlotte Islands. There we are taking a 4 day guided tour, via zodiac inflatable boat, of Haida Gwaii National Park. Finally we are heading back to spend at least part of August at the family cottage.

I brought the RV down from the storage lot about a week ago. As everyone around Ontario knows this has been a rather cold time with a couple of snow storms and lots of below zero temperatures. 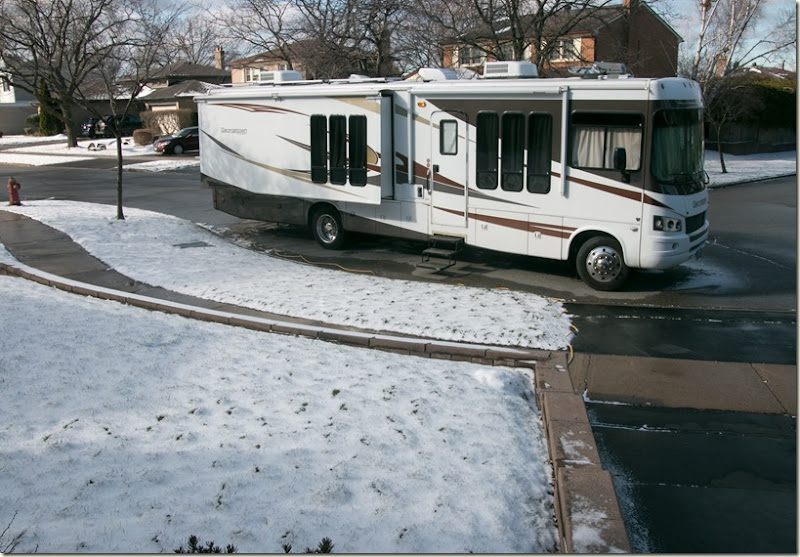 We had to be careful about the order which we put things in the RV. Clothes were OK but any food or liquids that could freeze had to wait until yesterday when the overnight temperature finally stayed above zero.

We got away at about 9:30 with minds straining to think of what we things had forgotten or had forgotten to do to prepare the house to be vacant.

I did have one minor screw up. We have added a bolster to our bed to make it a full length queen size. Before we can put in the bedroom slideout we are supposed to remove the bolster so that the mattress does not hit the far wall when the slide retracts. When I did retract it, I thought the hydraulic jacks sounded funny but didn’t think much about. It was only later, when we were on the road, that Jennie went to the back and asked me why the mattress had bowed up. With nowhere to stop we had to wait until we were out of the city for there to be a shoulder wide enough to stop and fix it. 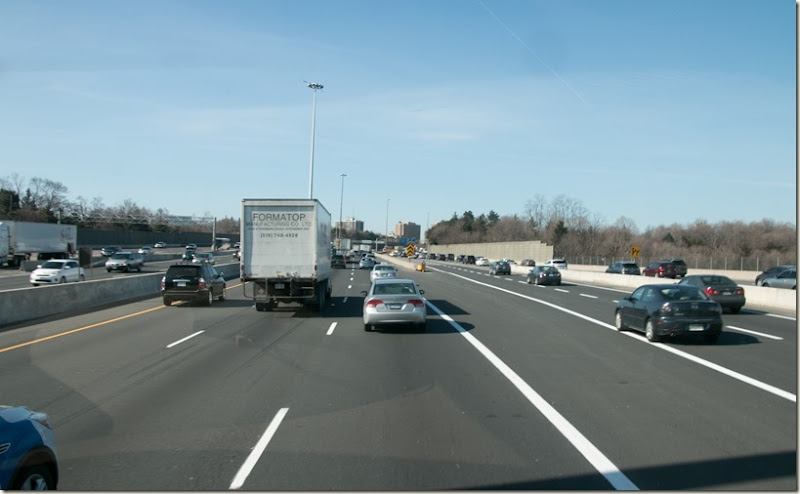 Once we had cleared the city and rush hour traffic we had thought it would be clear sailing but suddenly all the lanes came to a complete stop.

It turned out that a truck, heading east, full of scrap metal had somehow come to rest tipped over the center median. It had spilled a fair portion of its load on our side. It couldn’t have happened much before we got there because it only took us about 15 minutes to reach the accident site. There was lots of sharp metal bits everywhere.

A couple of cars were off the side with shredded tires and the pickup truck, above, looked like it had hit the remains of an engine block.

After that it was clear sailing especially on the long flat section before Sarnia. 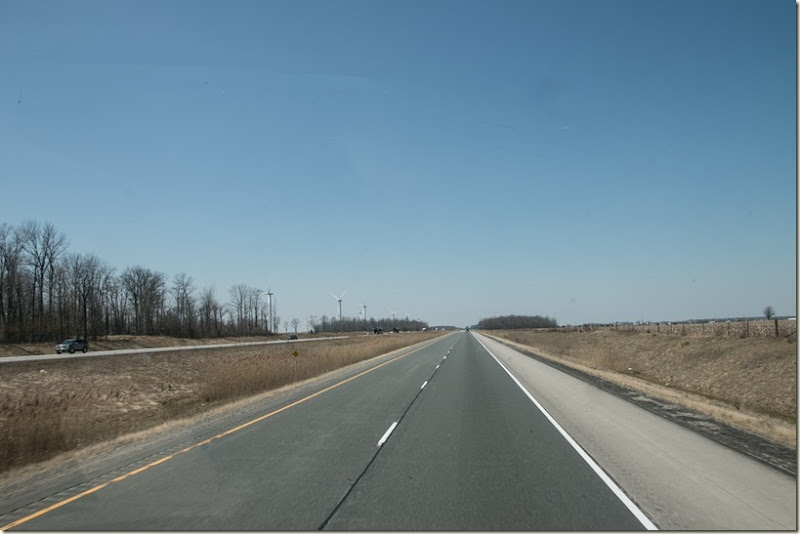 The customs guy at Sarnia asked where we were going and what food we had. We gave him a full list of the meat and veggies we had and told him that we had no fresh fruit or vegetables. He specifically asked about lamb and goat and citrus fruits. Since we didn’t have any we were free to go.

We are in Lansing Michigan, at the first of a succession of Walmarts. Most campgrounds are not open yet so they are our only real choice. 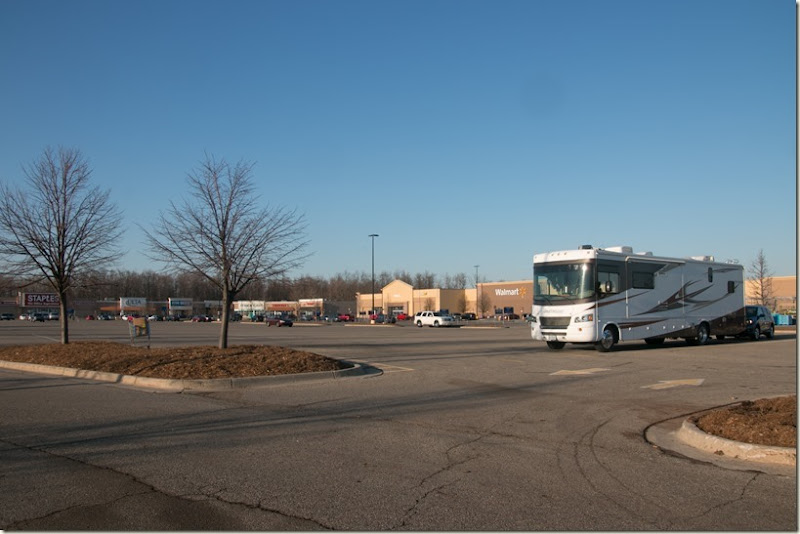 It was quiet warm here with temps in the mid 20sC. We did share the lot with one other RV.

Today we moved on to another one near Madison, Wisconsin.

The major excitement was driving through Chicago. I had told the GPS to avoid toll routes if possible since with the large RV and the towed car they get quite expensive. We did however pay the price in another way. Heavy stop and go traffic. 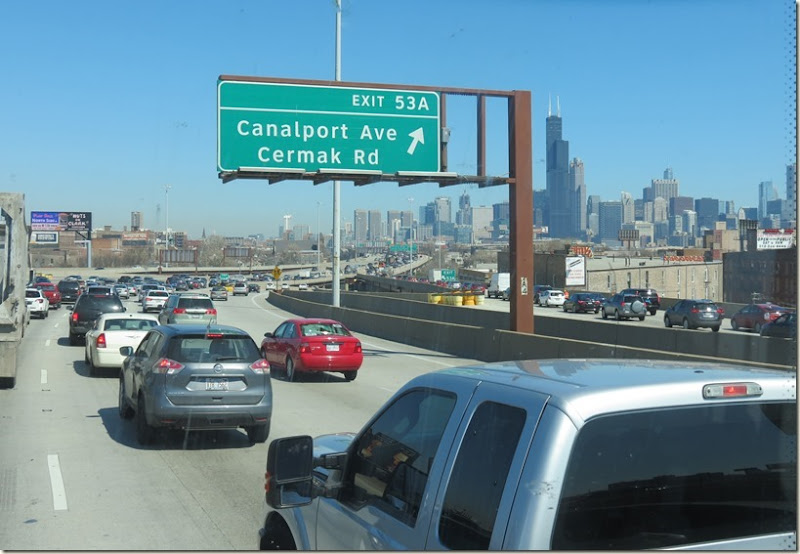 We did however get a LONG and SLOW look at downtown Chicago. 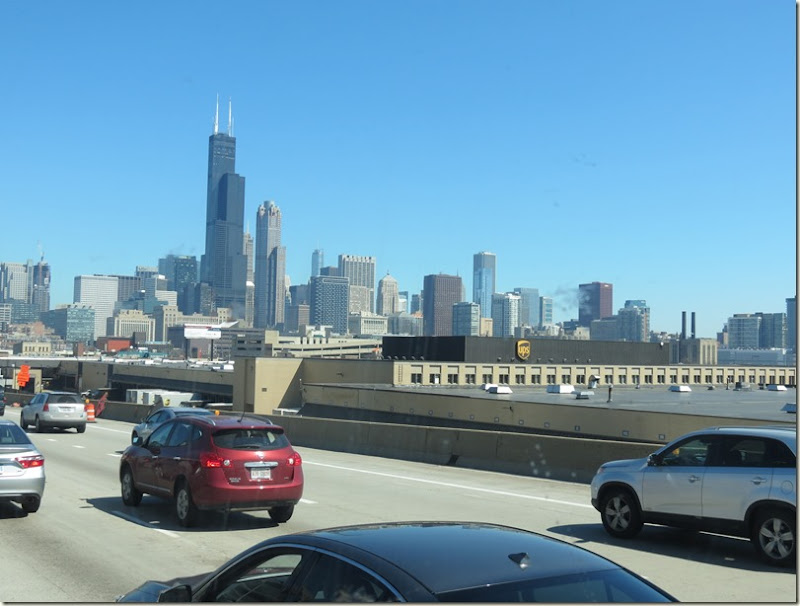 It is always kind of tense in this much traffic. The worst thing is having to change lanes. I have a hard time seeing people right beside me and nobody wants to have a hulking RV in front of them so I don’t get a lot of breaks. Sometimes I just have to signal and if no one moves I just start drifting over. Magically spots usually open up.

We did have one panic moment. Everyone was moving at a slow but decent speed and then around a corner all was at a dead stop. Screaming brakes all around, especially mine, Jennie spent the next half hour cleaning up all the bottles and cans that flew out of the cupboards and the papers from her desk.

I am not sure it was worth the saved money because toll routes would have probably been a lot less busy.

With the extra time spent in Chicago this was a very long day. We left at 8 am and finished at around 3 pm. We didn’t even stop for lunch because everything was so built up it didn’t seem worth it. Jennie just made me a sandwich while on the road.

The Walmart we are at is quite busy. When we arrived the only place with enough free spots was right next to a refrigerated semi trailer. About every half an hour the refrigerator engine would start to keep the trailer cool. After a while some more spots opened up and we moved to the other end of the parking lot. 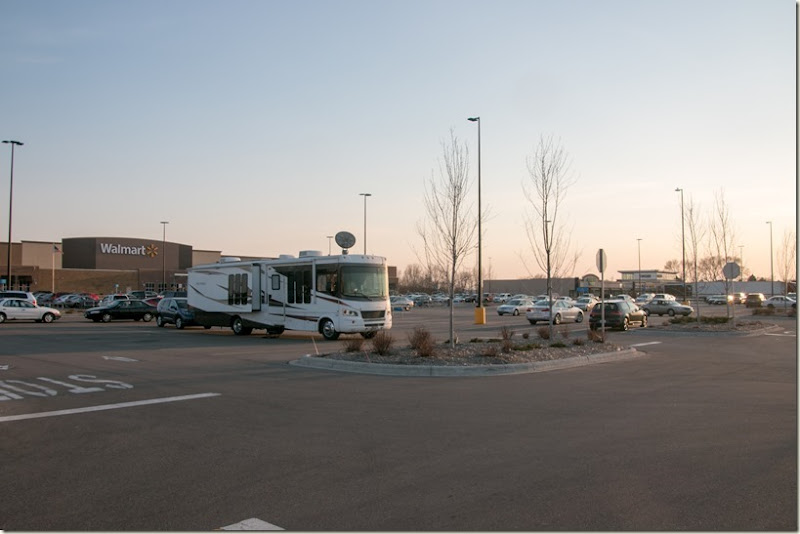 When I went to put the CRV to bed for the night I discovered that its battery was dead. When it is being towed you have to leave the key in the ACC position so that the steering wheel doesn’t lock up and the wheels can follow the turns that the RV takes. With our older CRV and its simple radio it was easy to turn everything off. The new one has a video screen that doesn’t seem to turn off even if the radio is off. The Bluetooth doesn’t seem to turn off either as our phones kept pairing with the car.

The Honda manual says to pull one of the fuses, which in itself is a pain, but this seems to turn off the power sockets as well. I need one active to power the supplemental brake controller that will brake the CRV when I brake the RV hard.

Yesterday we were OK because I restarted the car at lunch which gave the battery a bit of a boost. I am not sure what I will do long term but for now I guess we will be forced to stop more often.

It was another warm evening. When we got here is was 27C outside.

When I was planning our route out west I had assumed that the farther south we went the better the weather would be. Nope!

Last night I was surfing some of my regular internet sites and one of them joked about how Colorado was missing spring and just had 4 feet of snow dumped on them. Our route was going to take us along I-90 and the bottom border of South Dakota which is not that far away from Colorado. On checking the weather reports on some of the places I had planned on stopping showed highs in the long single digits Celsius and lows below zero.

Another possible route is to take I-94 which runs through the middle of North Dakota. The weather forecast along there called for highs in the high teens and lows in the high single digits. It also called for some rain but not much.

Since this northern route is only slightly longer it was a no brainer as to which way to go, so tonight we are in Sauk Center, Minnesota heading to Fargo and Bismarck, North Dakota tomorrow.

Todays drive was quite easy. Lots of this. 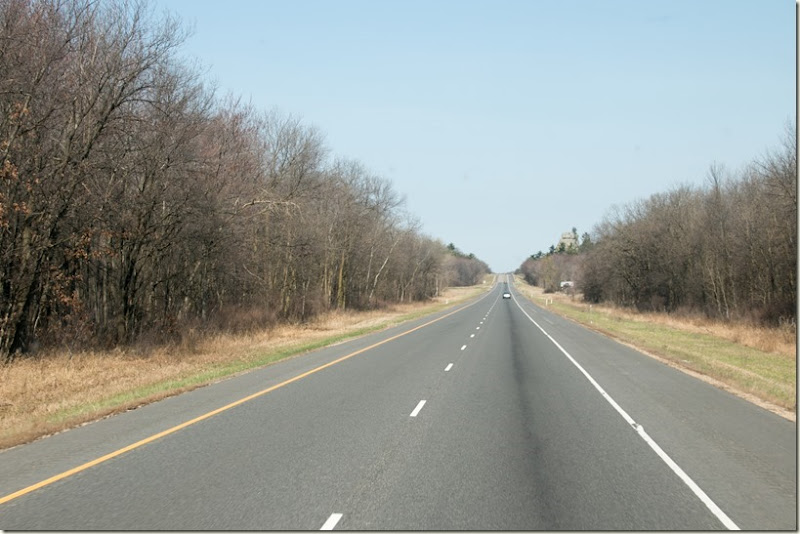 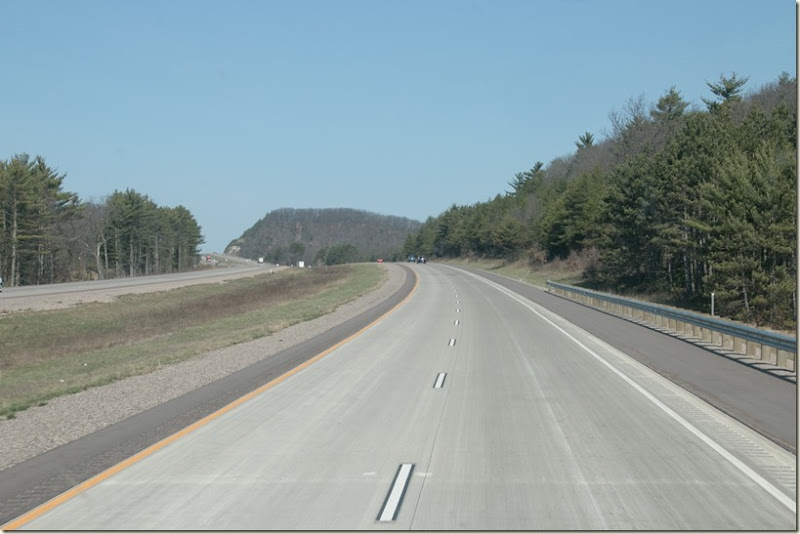 We did have to drive past Minneapolis / St. Paul which was busy but it was a Sunday afternoon so it was not too bad. 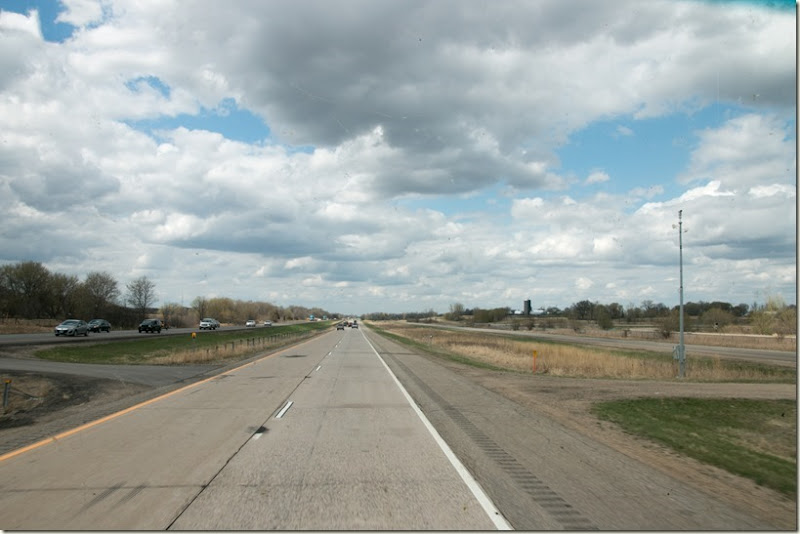 Parked at the Walmart it looks a bit threatening but so we haven’t seen any rain. 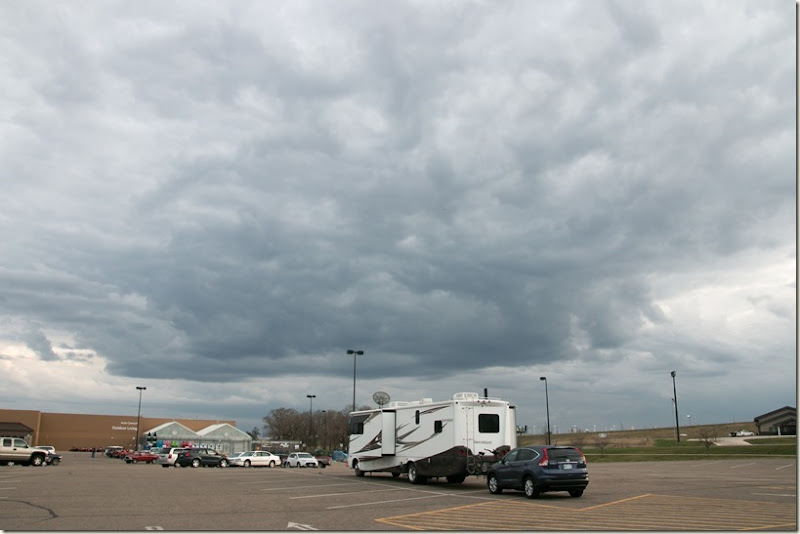 Also everyone is being very civilized about parking. All the trucks are staying down at one end while the RVs are at the other. So far there is another motorhome and a trailer joining us. 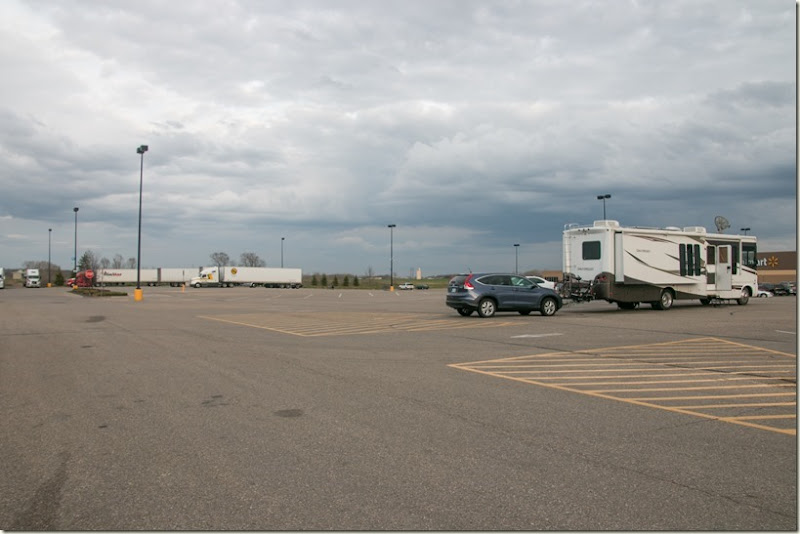 It was a dreary day of driving but the highway was very smooth and there was very little traffic.

The road started out a bit hilly but then opened up to vast flat plain with the highway off to infinity. 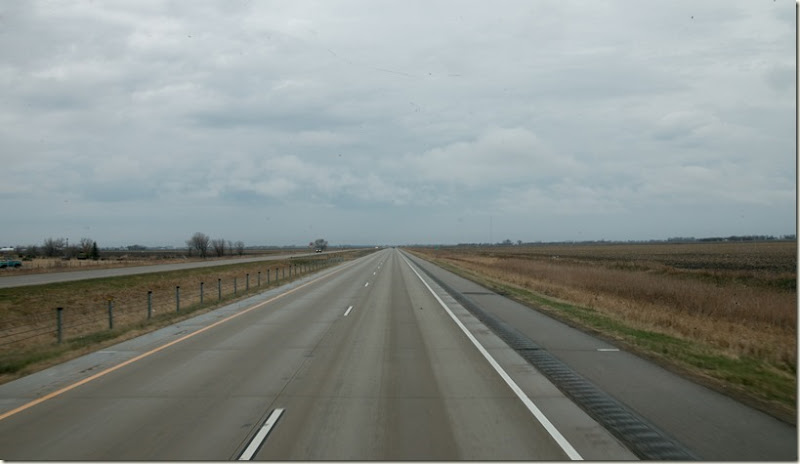 In the morning we faced a headwind from the front right side which made for slow going but after we turned west at Fargo it was from the side and more towards the rear which actually gave us a bit off a push.

However we ran into this. 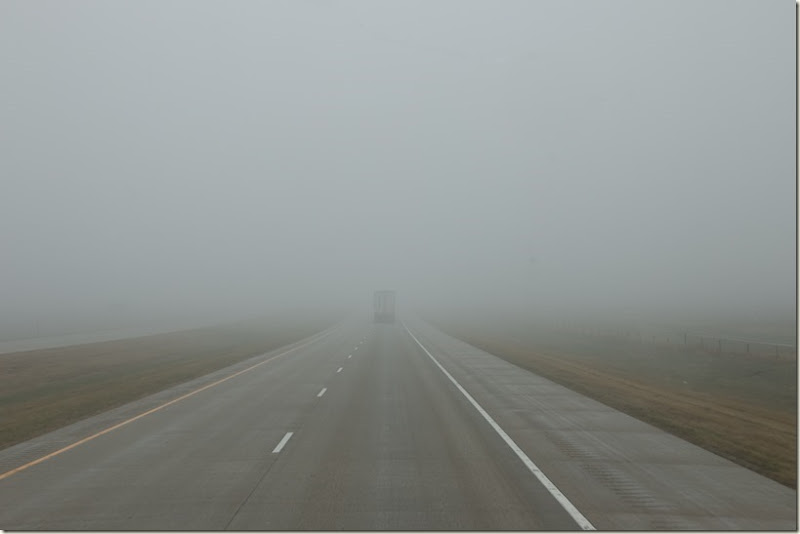 Now there was even less to look at. We could eventually see a bit farther but it rained on and off. 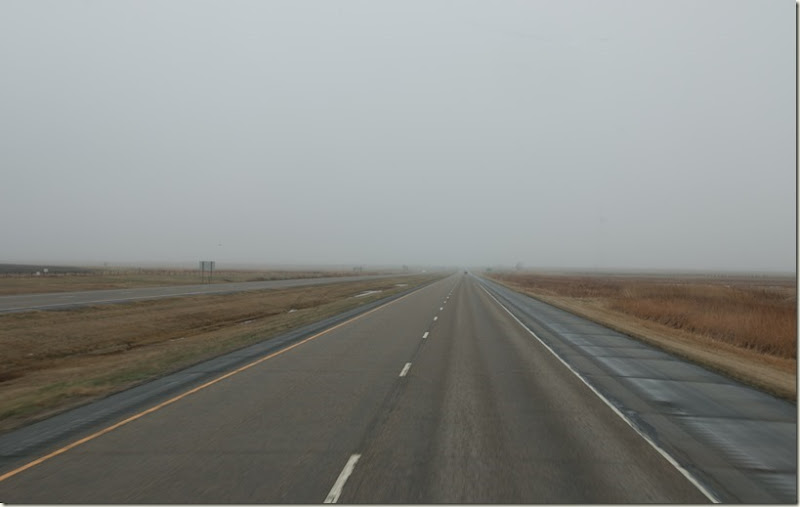 The regulation parking lot picture just for the record. 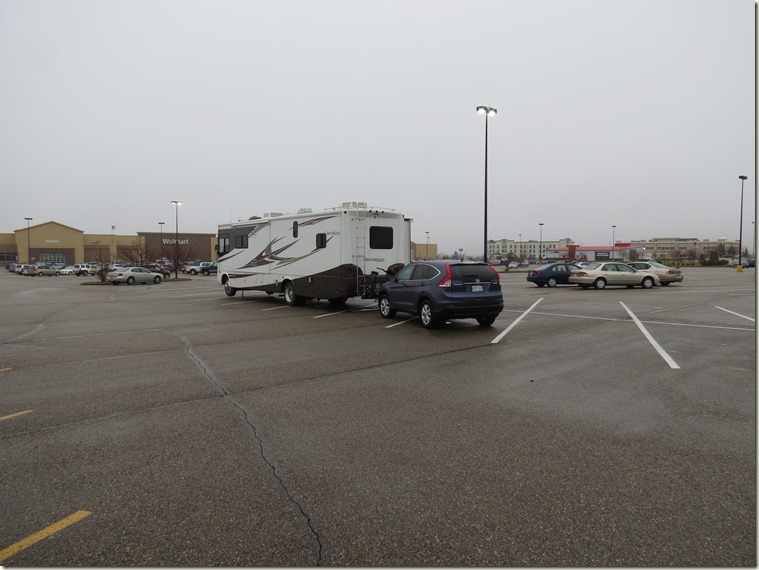 Tonight’s Wifi is actually courtesy of the hotel in the far corner of the parking that you can see just over the top of the CRV.

We have crossed over into the cold front. It is 6C outside right now so on goes the propane heater.

This is also approximately half way in our trip to the coast. It is pretty depressing when you look at the map and see how little you move each day.