Today was a gorgeous clear sunny day and therefore it was time to climb the lighthouse, especially since this is our last day here. 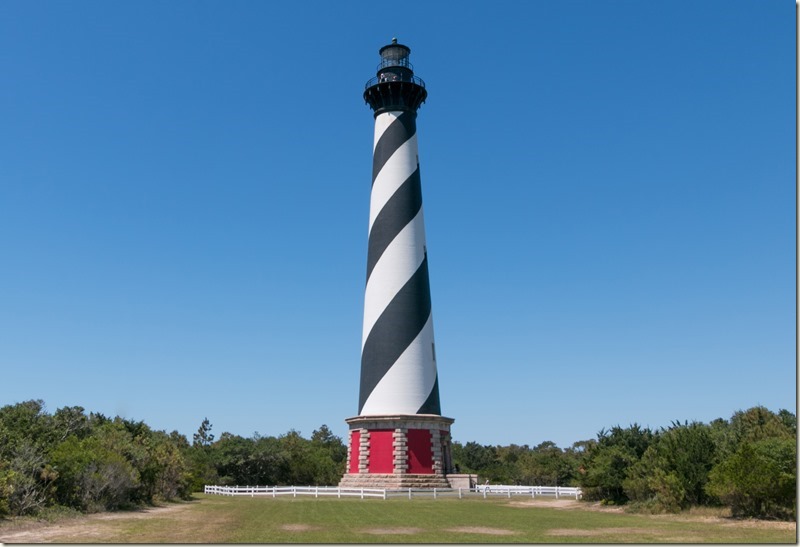 It is 208 feet tall and the tallest brick beacon in the country. There are 248 steps to the top and it is $8 a person. I probably could have faked being 62 and gotten the $4 price.

There was no way Jennie could do it with the open staircase and the height at the top.

They only let groups up every 10 minutes. When it is busy in the summer you could have to wait a while for your 10 minutes to come up but now we walked right up. They give you a talk about taking your time and that it is not a race. Every 31 steps there is a platform to rest if you need it. 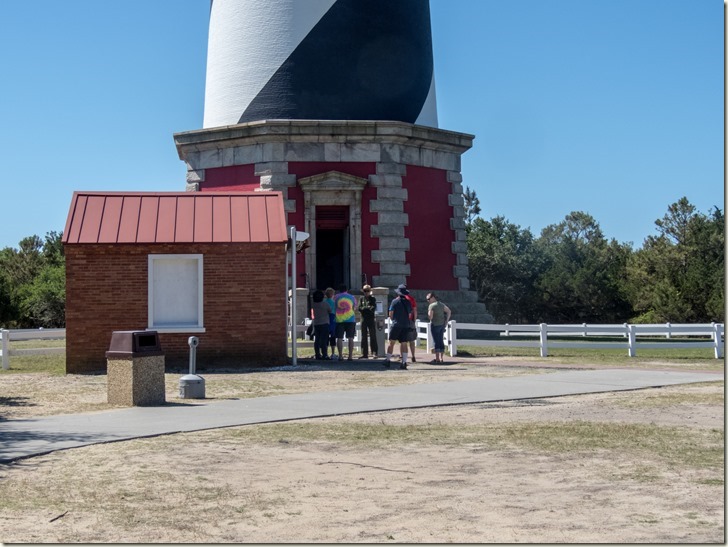 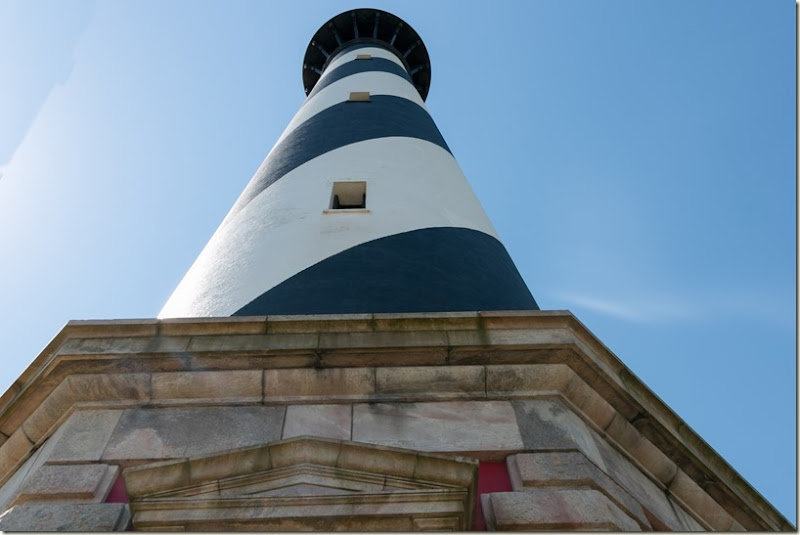 I must admit that there was some (but not too much) huffing and puffing on the way up. 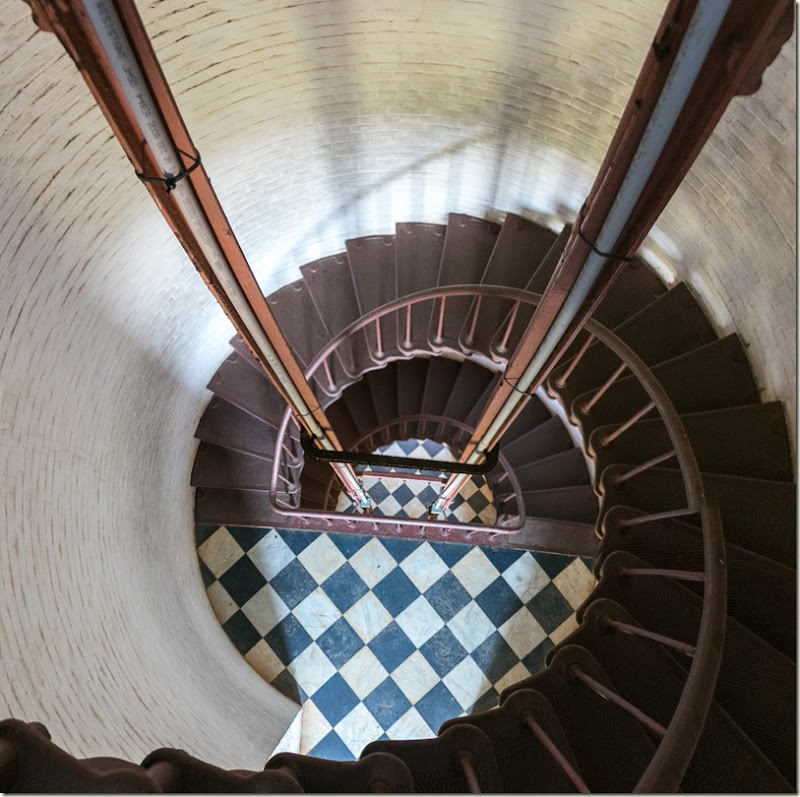 There is no hole through which you can see top to bottom. There is only a small slot which those tracks run through. Back when the light was turned by a clock mechanism the keeper used to have to crank up the weights that ran the clock. Initially they didn’t have the track and sometimes the weights would twist and jam between floors. If the keeper kept cranking the line would break and the weights would go crashing to the bottom where there was sand pit to cushion the blow. I am not sure how long it took before someone decided that maybe the weights should be on a track so they couldn’t jam. 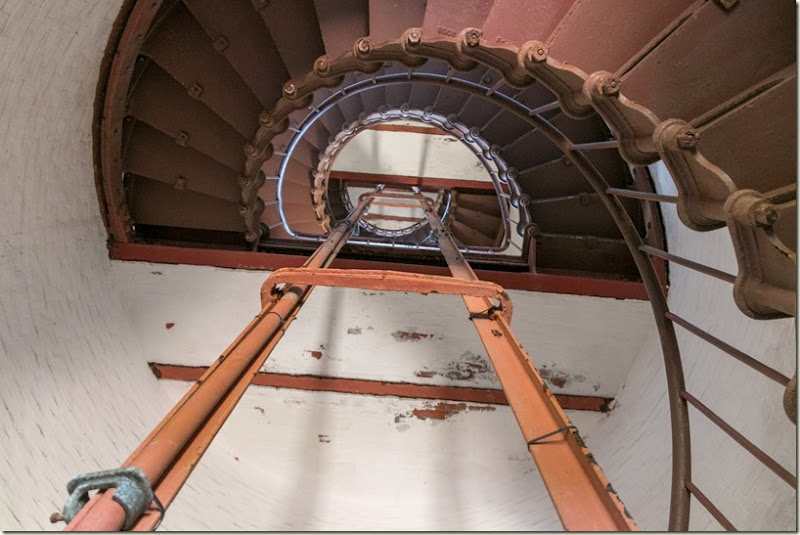 I took a really disjointed photosphere here but it gives you a better idea what it was like climbing. 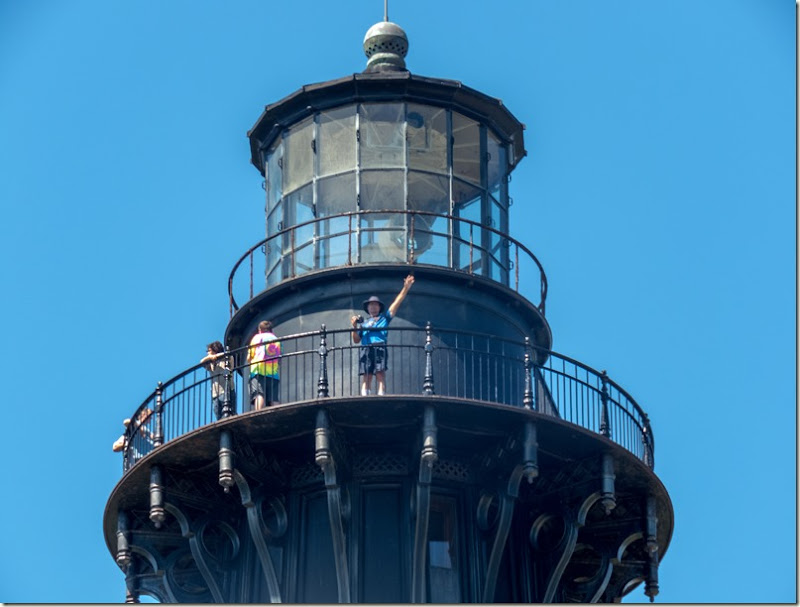 There was a sign at the top saying that you sere supposed to limit your time on the balcony to 5 minutes but because it was not busy the ranger there did not enforce it.

Looking back down to Jennie. 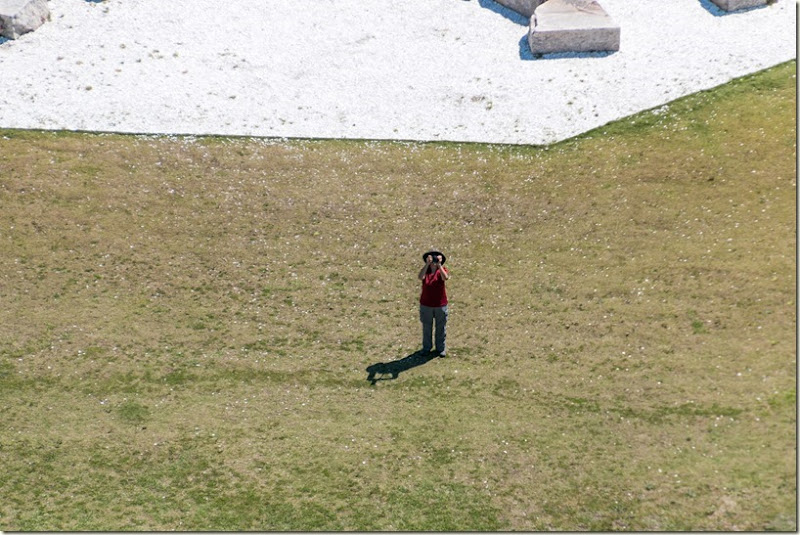 She is almost dead center in the picture below. 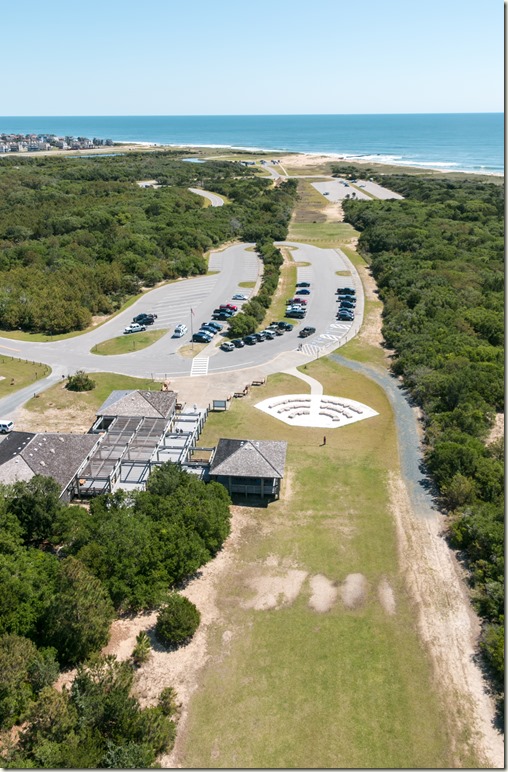 You can also see the path and the distance that they moved the lighthouse. More surfers were out at the beach we were at yesterday. 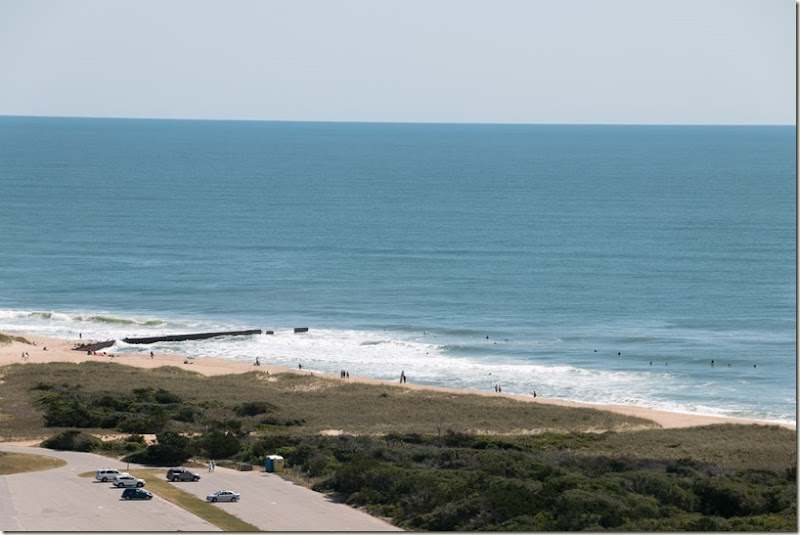 Looking south towards Cape Hatteras. You can see the sandbar at the very tip running of to the left. 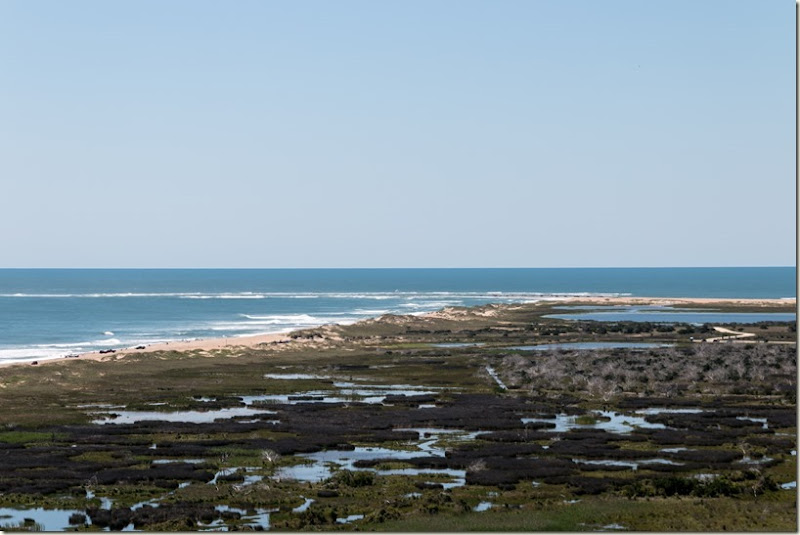 Looking north at the thin strip of sand bar with the highway between Buxton and Avon.

I did two photospheres while I was up there.

This one was the standard one where I stand and spin in one spot.

For this one I moved around the balcony as I went around the sphere. It is a bit disjointed but I like it.

The light used to be a lamp with a huge first order Fresnel lens. Now it is two 1000 watt searchlights.

Another wider look down at the visitors center and Buxton in the background. 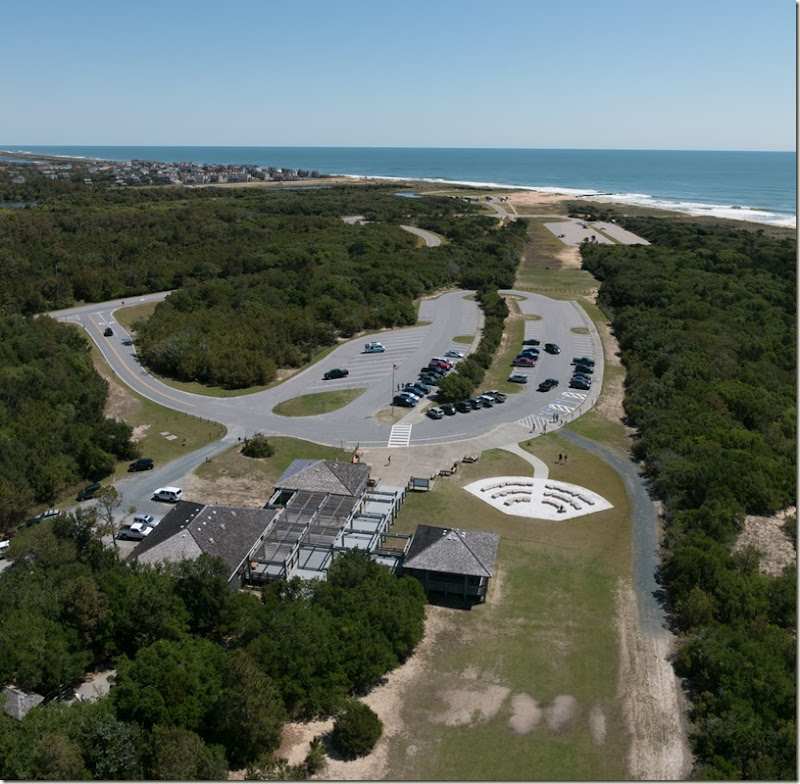 I was up there for a little more than 1/2 hour. Jennie amused herself taking some photos of her own. 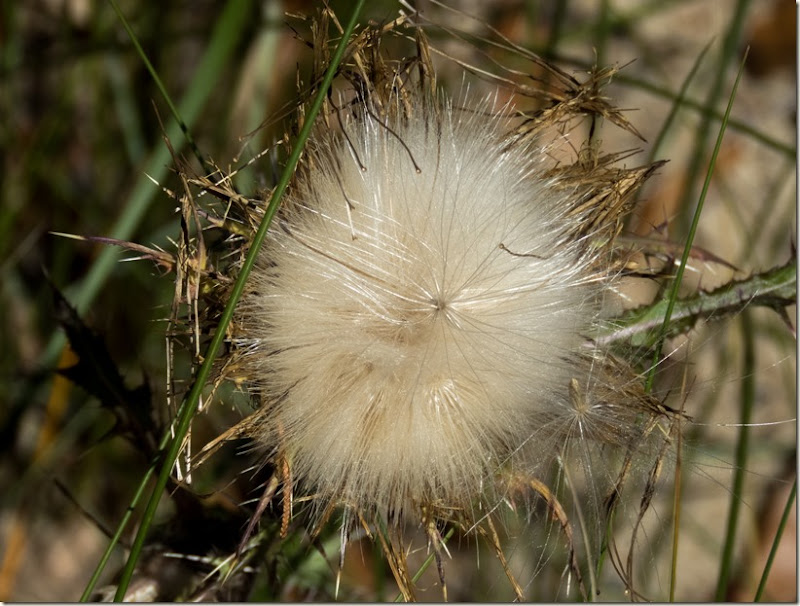 We listened to a ranger talk and then decided to see if we could walk down to the cape. We drove down as far as we could and parked. We could probably have gotten an off road pass (for $50 a week) but I really didn’t think the CRV had the clearance for some of the deep ruts in the sand.

As this is Sunday, the beach was lined with trucks and fishermen. Since it is Mother’s Day, I assume all these fine gentlemen were going to take their mothers out to dinner tonight. 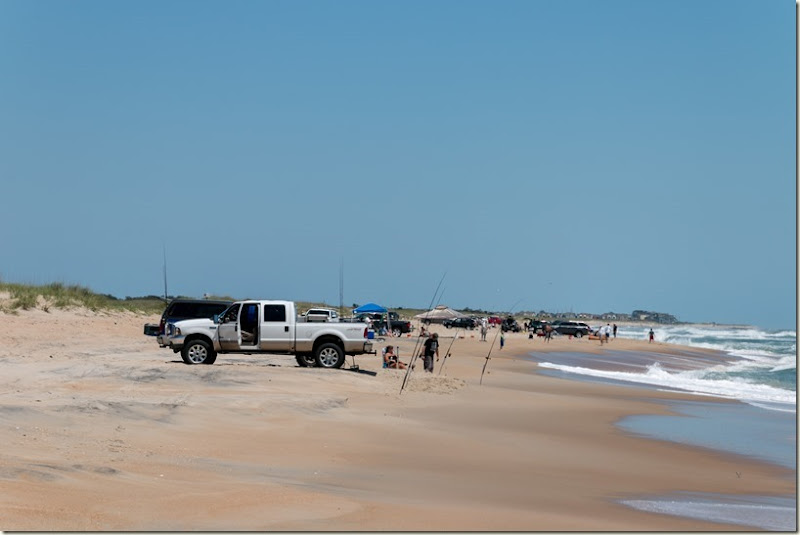 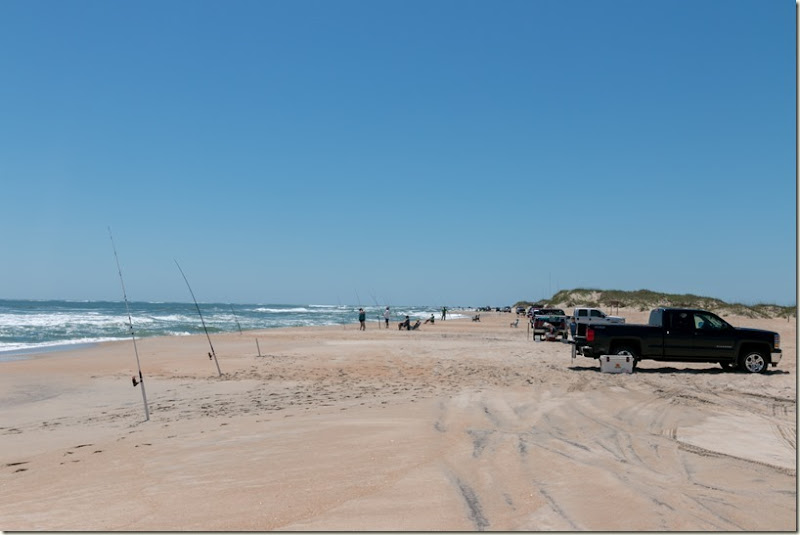 This guy managed to get himself stuck. 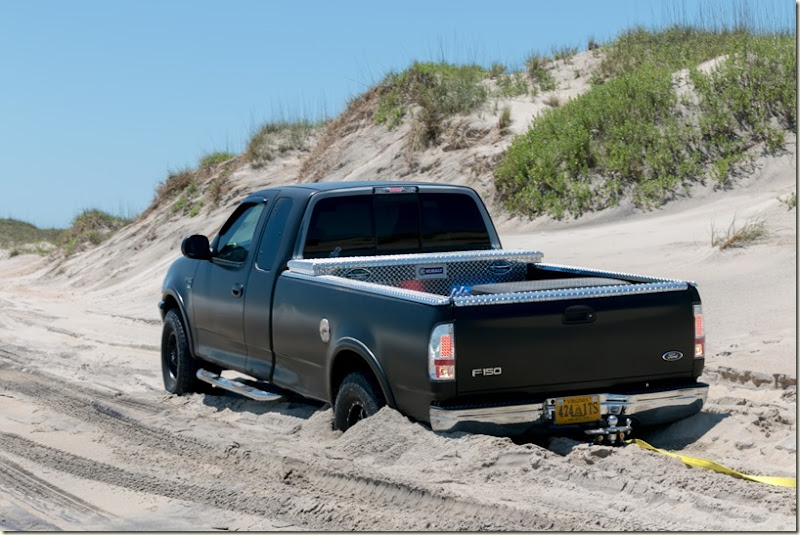 Somebody came to help pull him out. 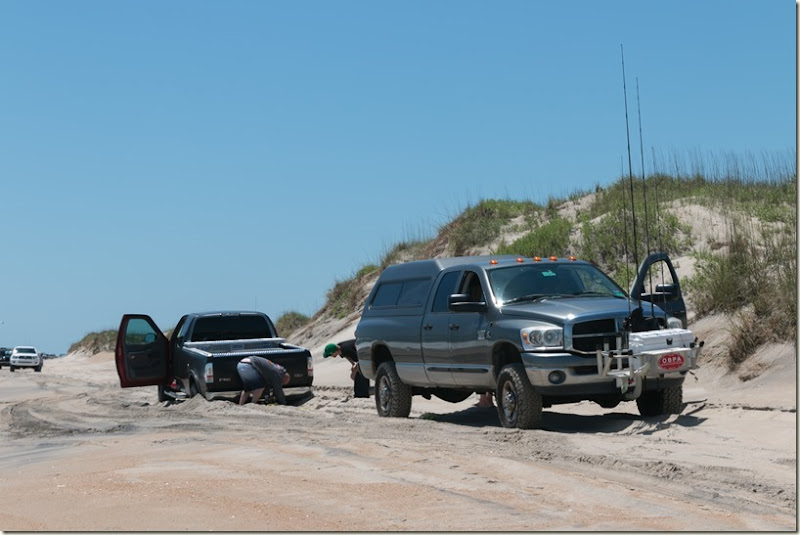 I am pretty sure his problem was that he forgot to switch to locked 4 wheel drive mode. When he was trying to back out with the pull I only saw his back wheels spinning. He eventually figured it out because after he got out he was soon was plowing through deep stuff with all 4 wheel going.

There is not a lot of room between the dunes and the surf. To get around the fishermen we initially walked on the “road”. 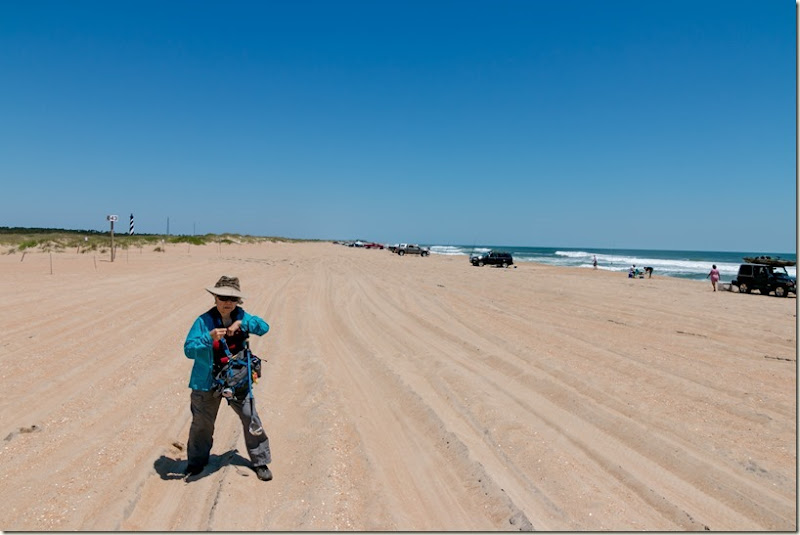 We soon said to heck with that and just walked under everybody's fishing lines along the surf line.

They was a short section with no trucks. I guess it was too narrow to park without blocking the road.

As we got close to the tip of the cape we came to this sign. 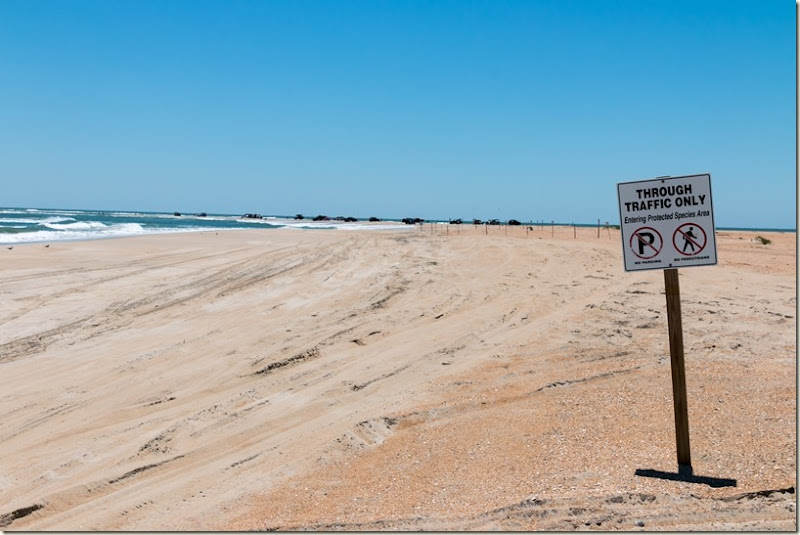 It said “No Pedestrians” on this section of the beach and the rest of the cape was closed due to birds nesting. It just made no sense to us. The trucks could drive through it but for some reason we couldn’t walk through it. It was annoying to see all the trucks down there. 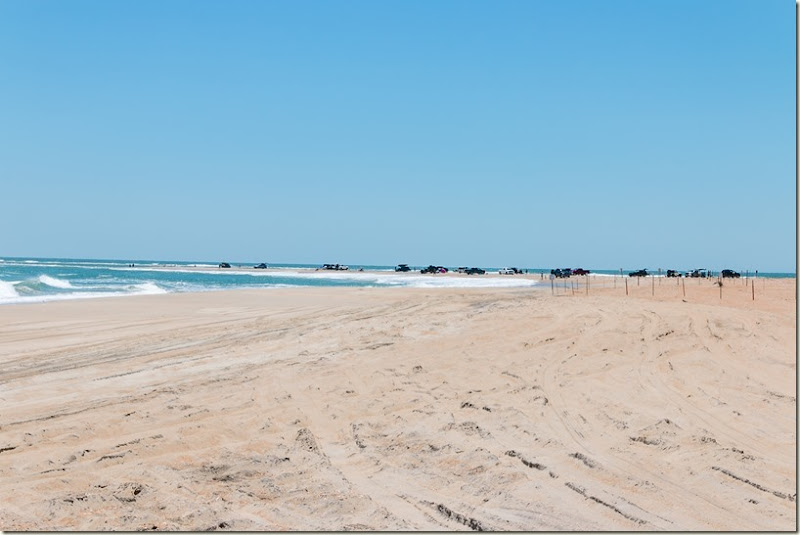 We thought about hitchhiking with a passing truck but just turned around and headed back to our car.

Since it was still early and such a nice day we went to a pedestrian only beach and did a short walk up to the pier in the distance. Much easier walking but still not a lot of shells. 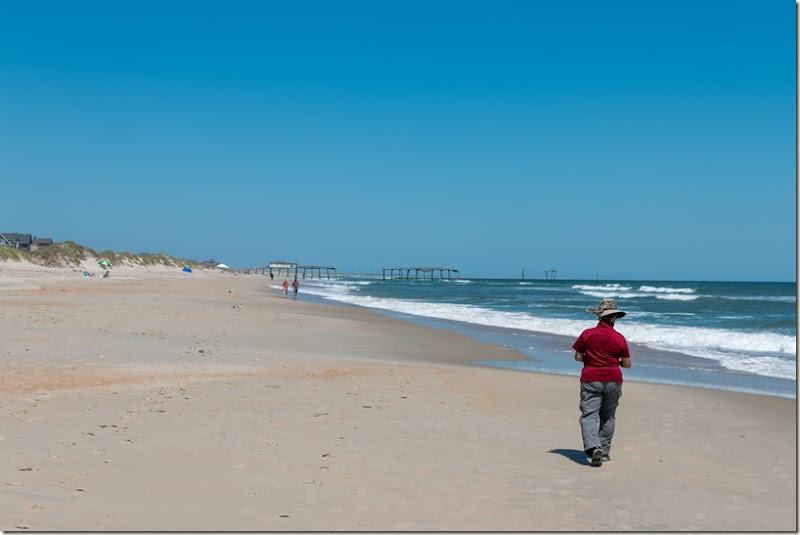 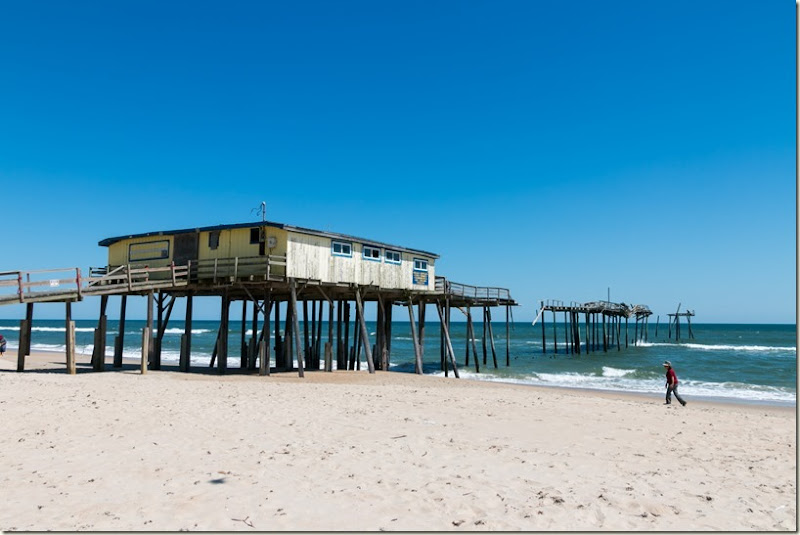 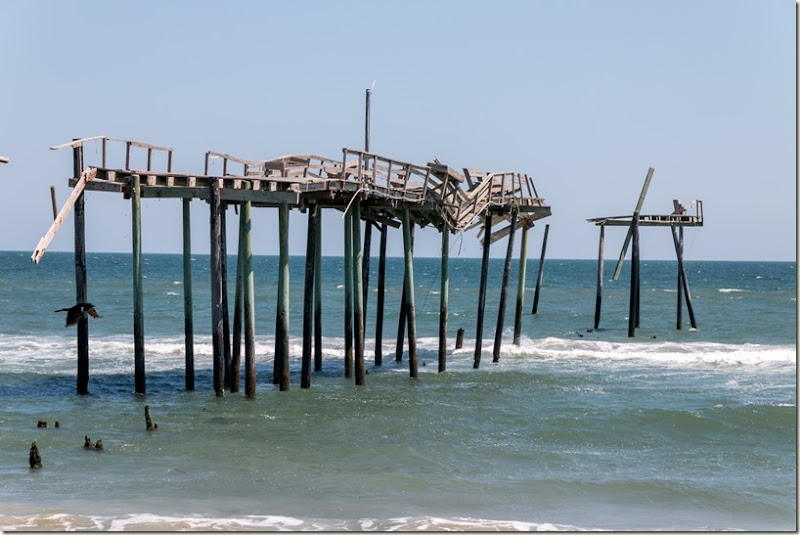