May 8 – Boat trip to Portsmouth Island

A great day for a boat ride. Clear, sunny skies and very little wind so very calm seas. The last few days have been very windy so I had been worried about going across in a small boat.

Walking through town, to get to the boat, we saw this great golf cart. 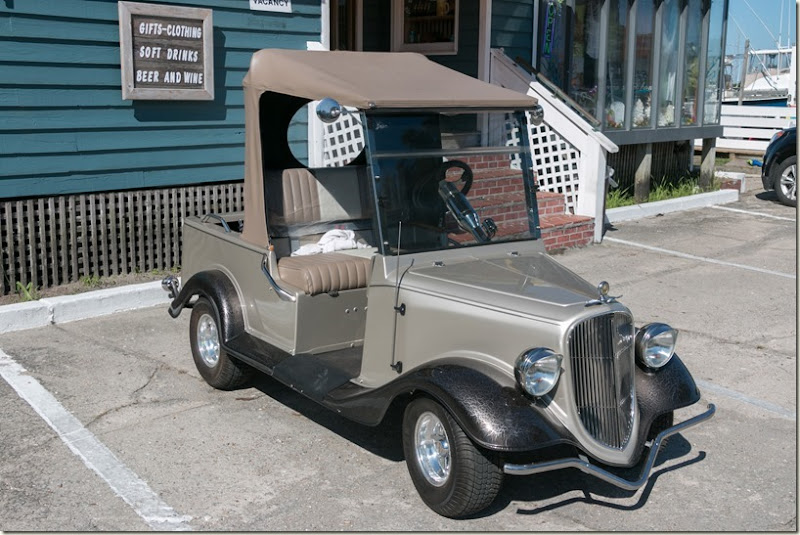 Portsmouth Island is the other end of the bank that has Cape Lookout at the far end, which we were at the other day. It used to have a thriving harbour but got sidelined as the sand banks moved and cut it off. It is also supposed have one of the premier beaches for shells in the country. 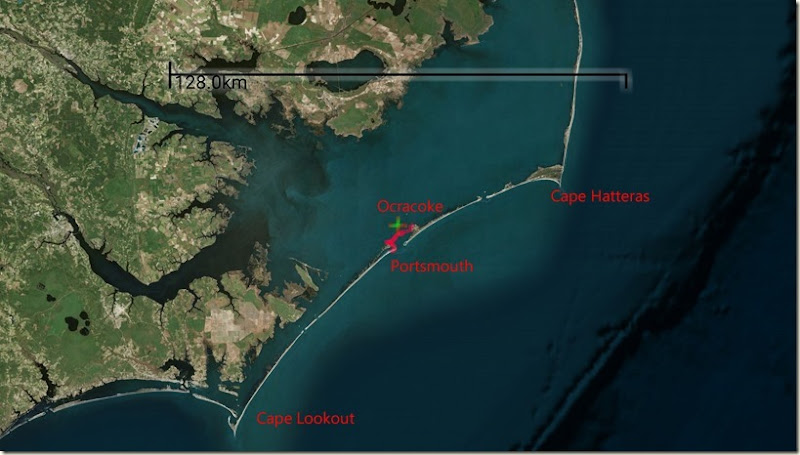 You used to be able to walk between the village and the beach but the changing dunes have made that impossible. Now you have to choose between visiting either the village or the beach. 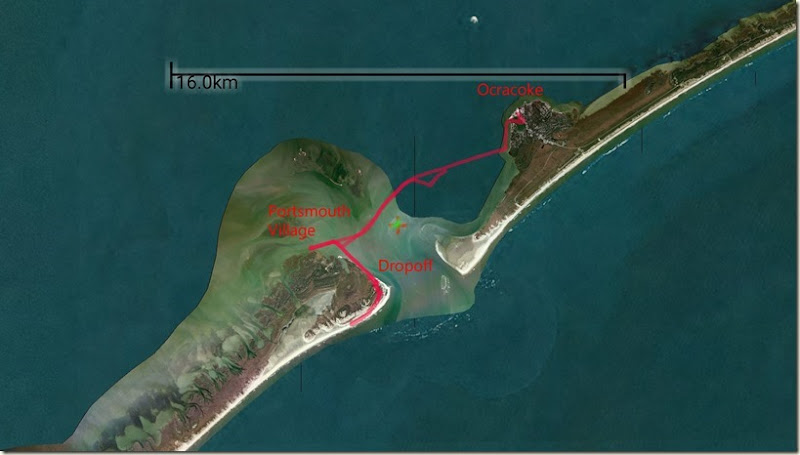 The way to get over there, if you don’t have your own boat, is by this tour company. 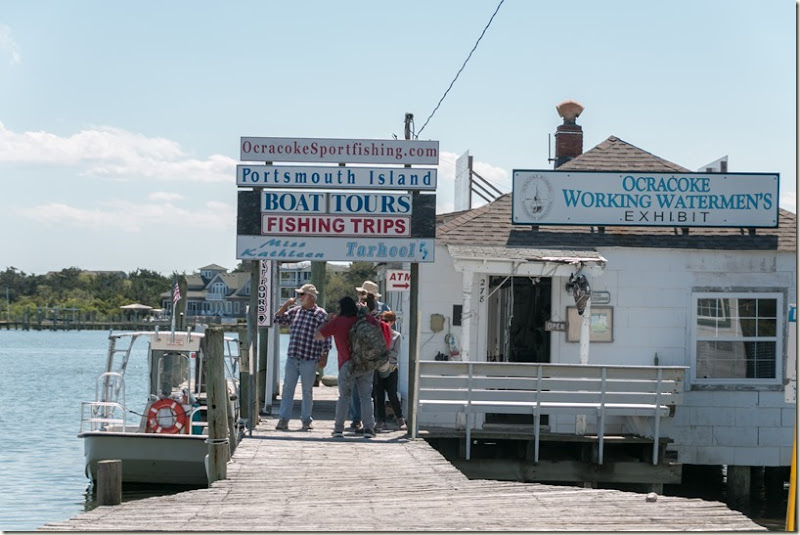 They have no office. You just call a cell number to ask when they are running tours. When I called the wife had to yell for the husband to come with what was happening. We caught the 10 am trip along with 6 others. Four were going to the village and the other two were going to the beach with us. 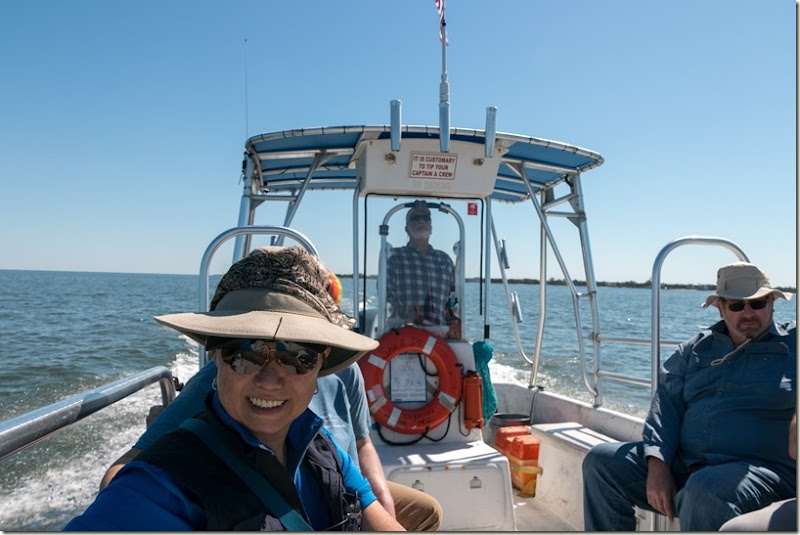 There are some seriously shallow sand bars around here. You really have to follow the marked channels.

I asked what these strange structures were perched on pilings very far from shore. Duck blinds. I guess it is shallow enough around them that it is sometime out of the water for the birds to land. 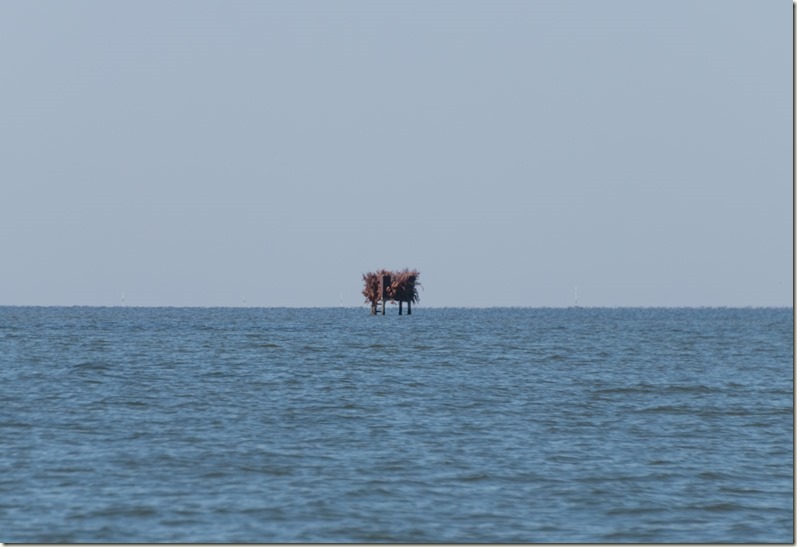 I joked to Jennie that this structure, again far from shore, with a flash of orange looked like a water slide. 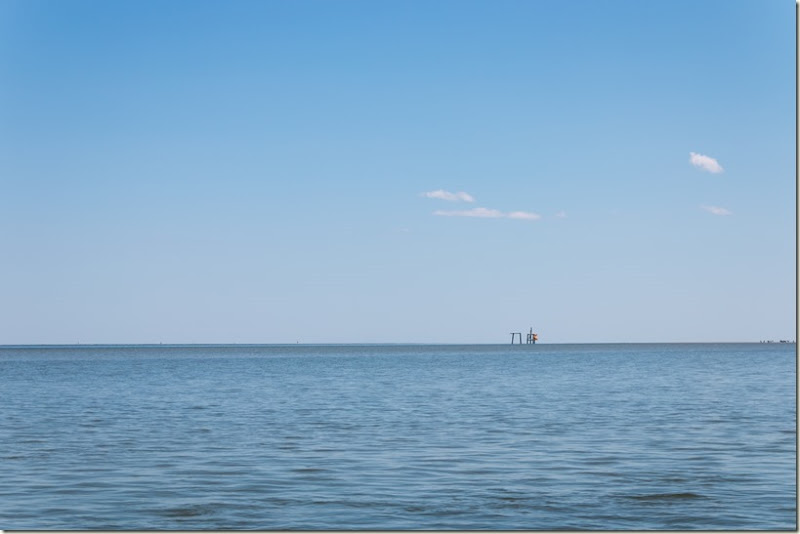 It actually was. The captain said it was the “Ocracoke Water Park”. The water is very shallow around it so that people pile in their boats and bring the kids out to play here. 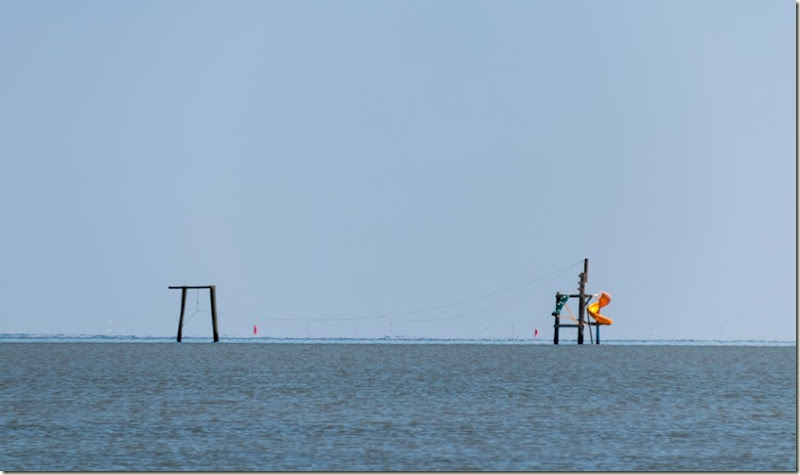 We first dropped the people off at the village dock. 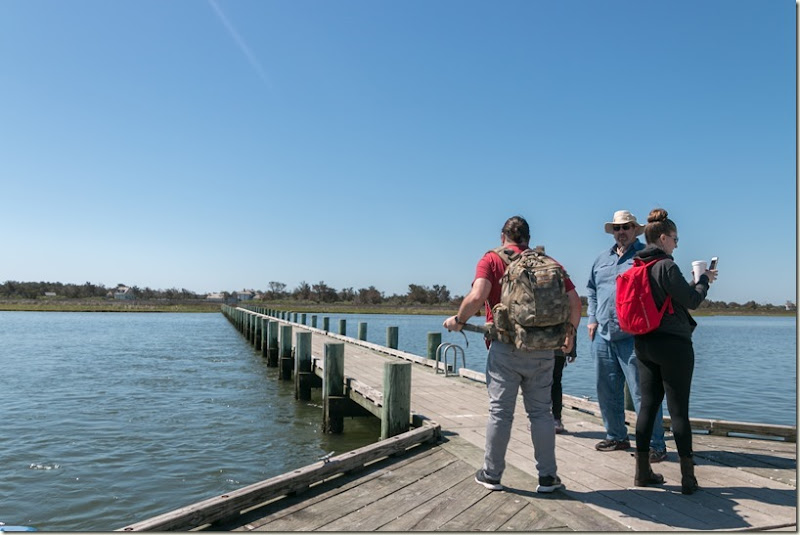 We weren’t terribly interested. It was a bunch of old building with information displays in each one. 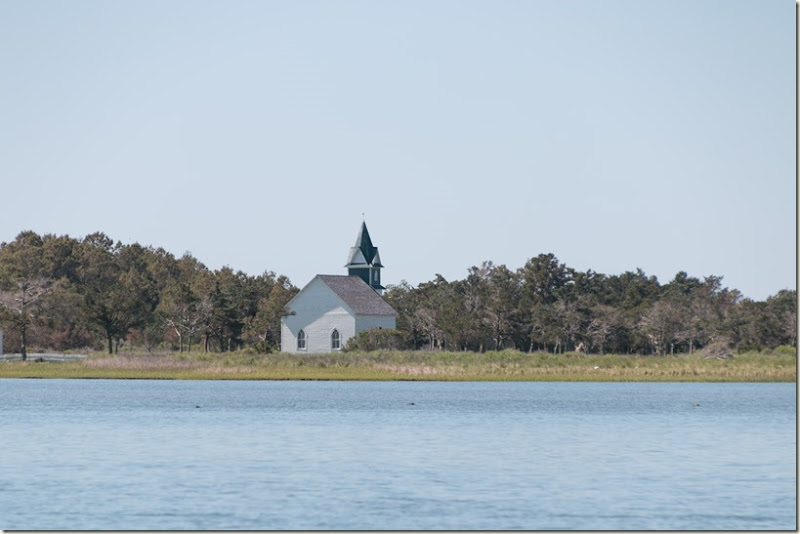 Just off shore from the village is a small grassy island with a building on it. 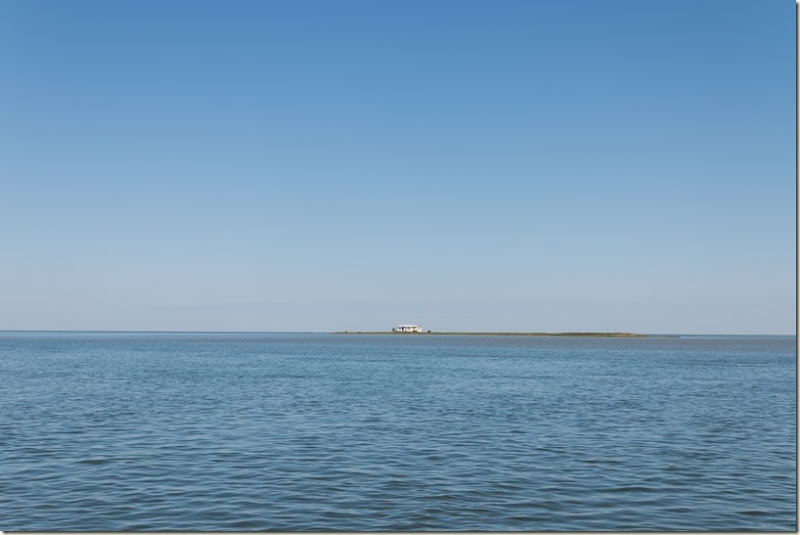 The owners use it as a fishing and hunting camp. None of the locals can understand how it has survived so many hurricanes in such an exposed location. 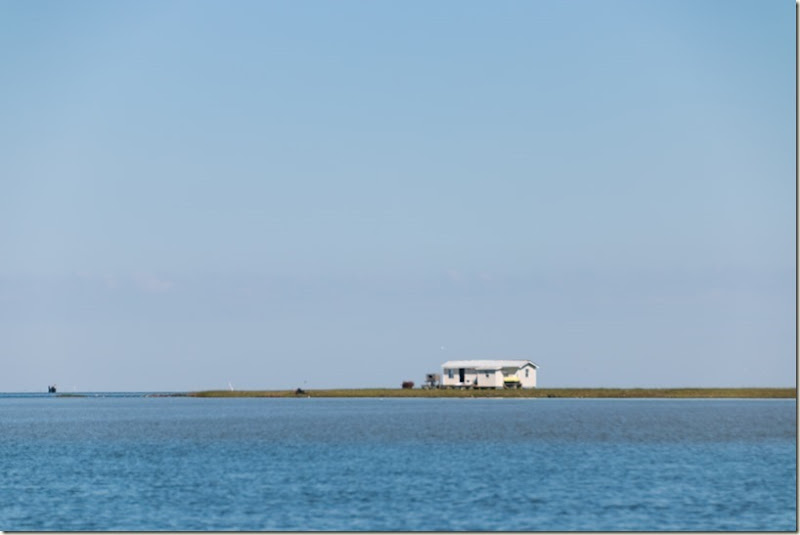 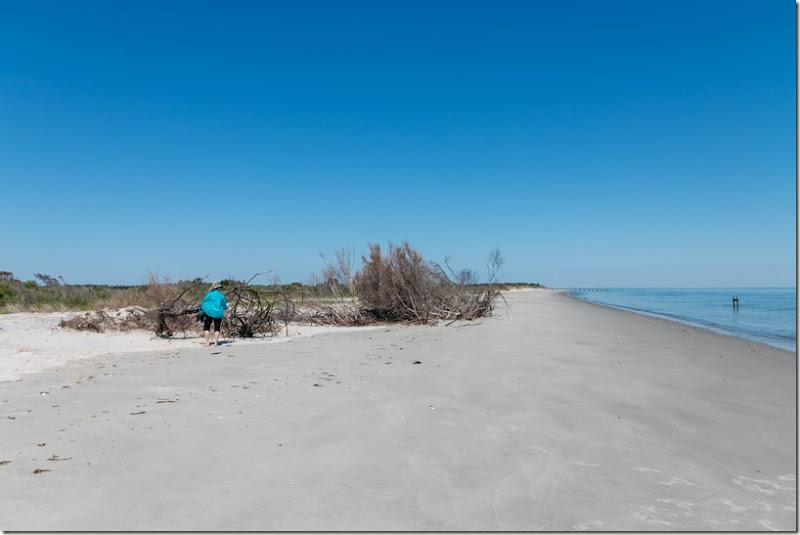 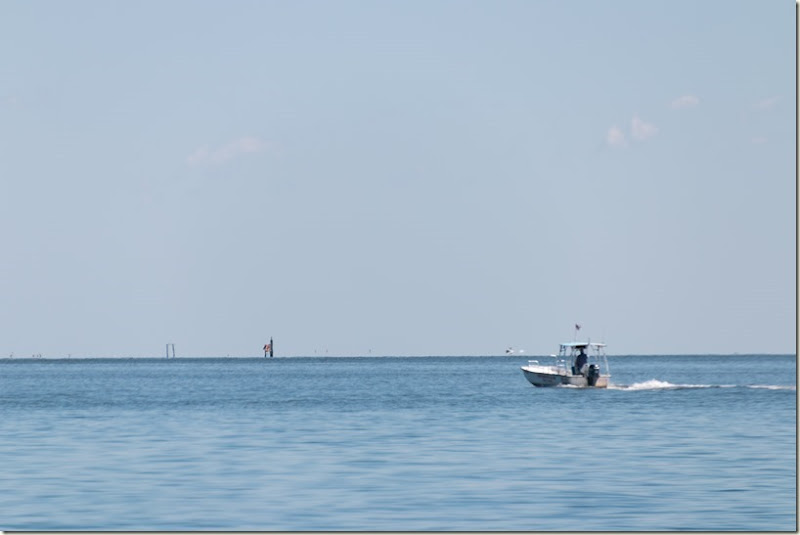 The GPS track and the picture don’t quite match, as we did stay on the beach the whole time. From the scale it looks like we walked about 4 km but our pedometer said that it was closer to 6. 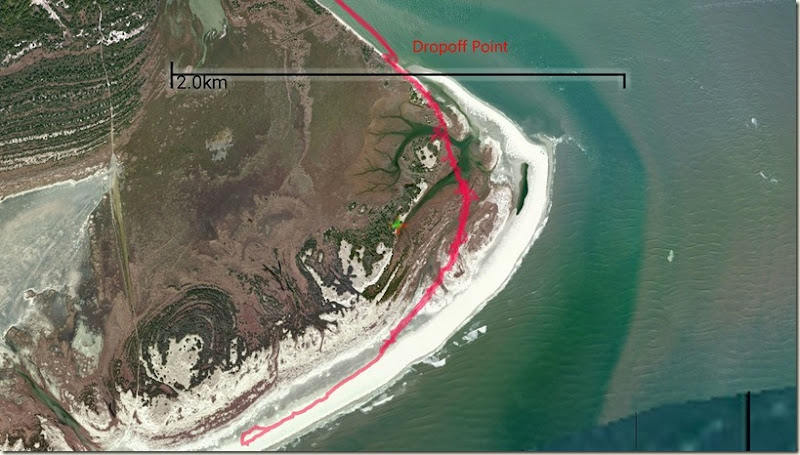 At the dropoff the beach was a bit narrow and close to the dunes. Around the corner it got very wide. 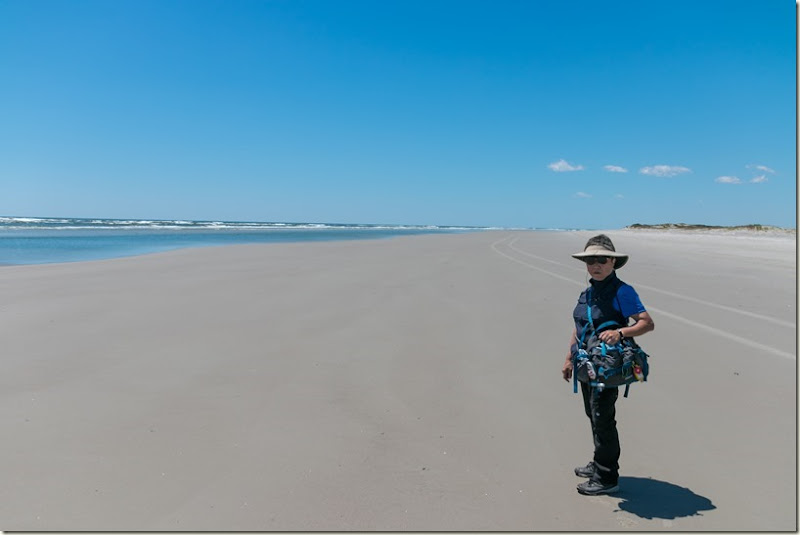 As usual there were lot of shell but not a lot of good ones. You really have to be the first ones here after a big storm. They also say it is better in the winter but that is certainly not happening. We did find a few nice ones and Jennie ended up with a couple of bags full.

Some of the interesting things we did see…

A different jelly, a Sea Nettle. 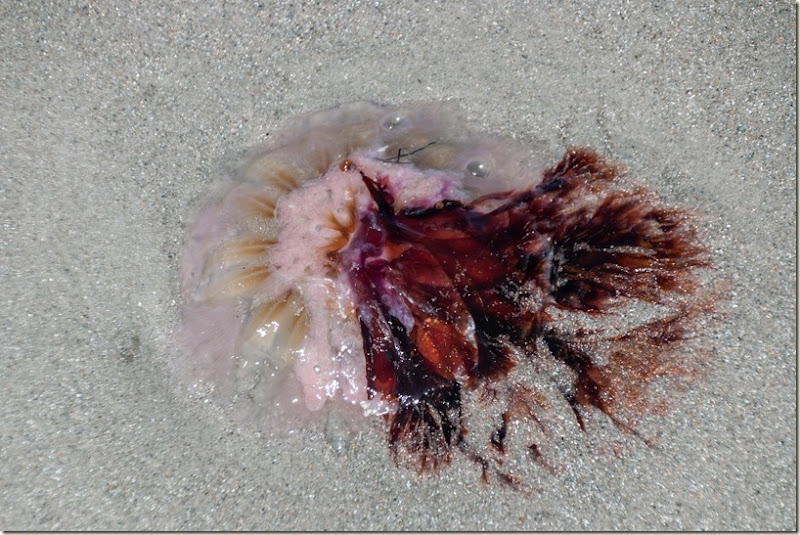 I seem to remember that this is the egg case for one of the mollusks called a Whelk. It was about 10 inches long. 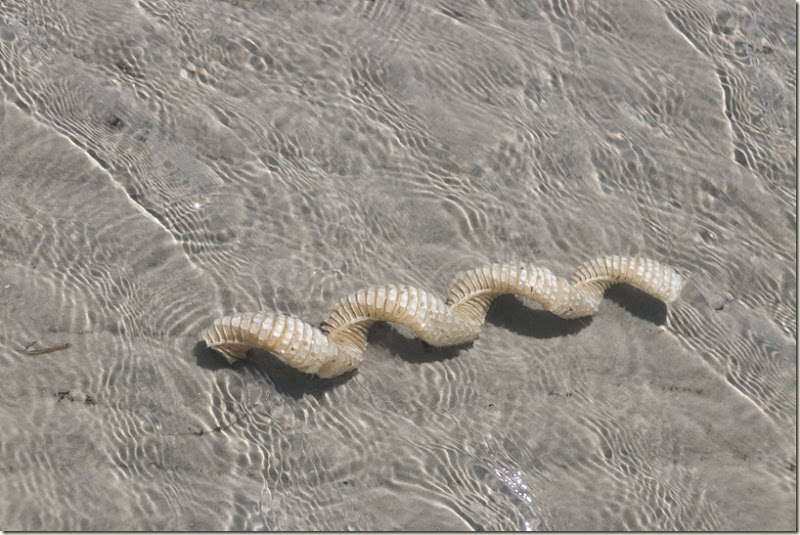 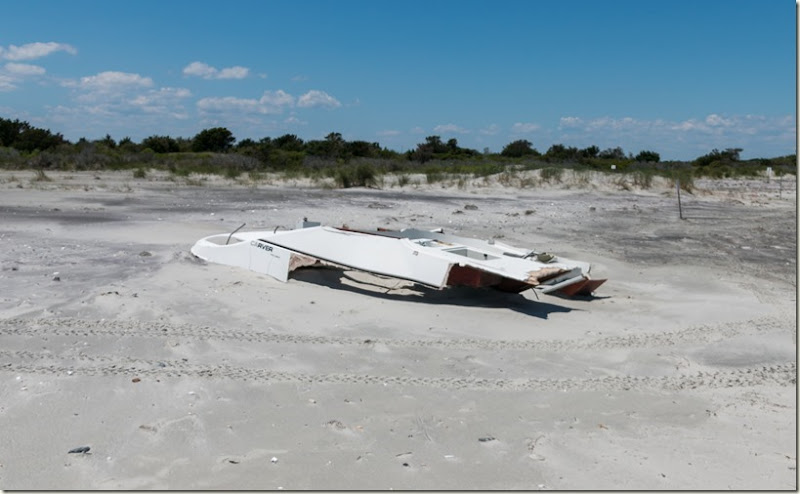 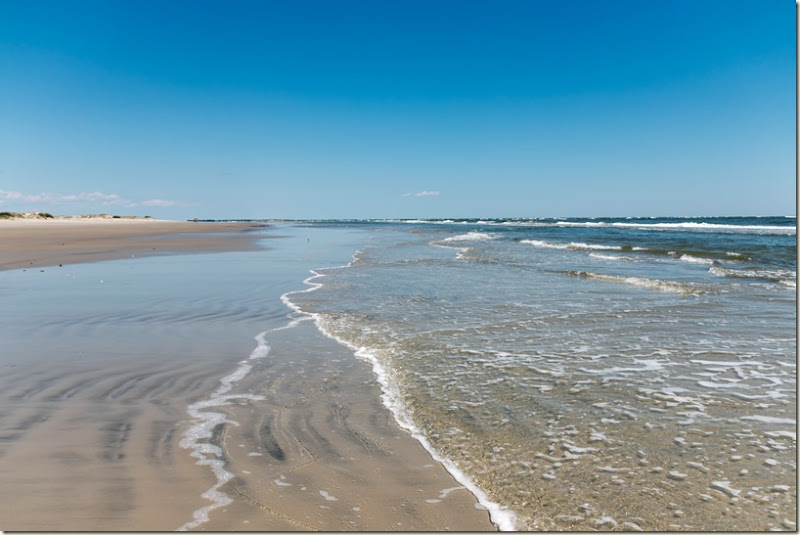 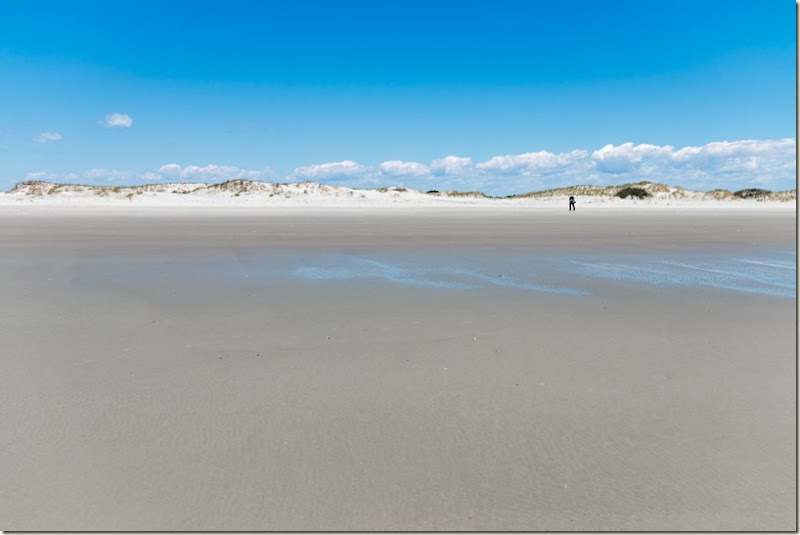 Around the point, near the dunes, the flies were vicious. We had sprayed Deep Woods Off, which is 30% DEET, but it had no effect. Later the captain said that the only thing that worked was 100% DEET, if you could find it. We had to keep escaping down to the water line, with a lot of arm waving, to try and get rid of them. There was also not much wind to help out.

More stuff. I think this is a fish skeleton. 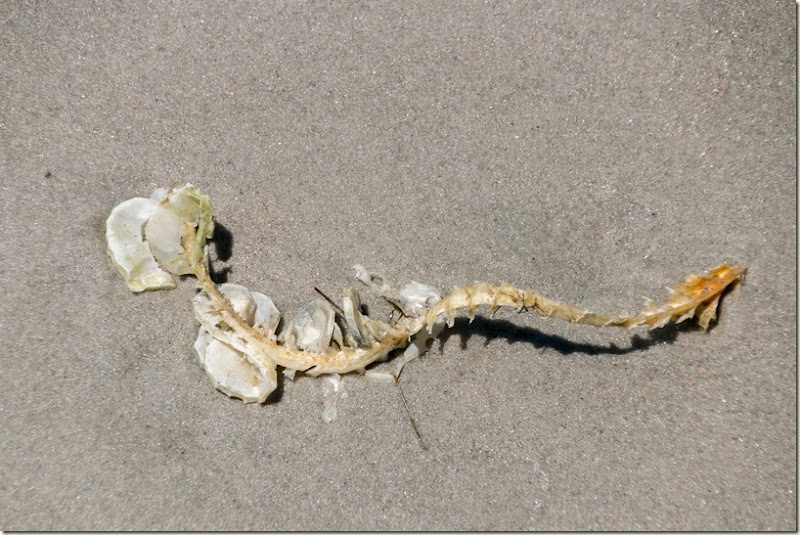 Another, almost cute, tiny puffer fish. It was about 3 inches long. 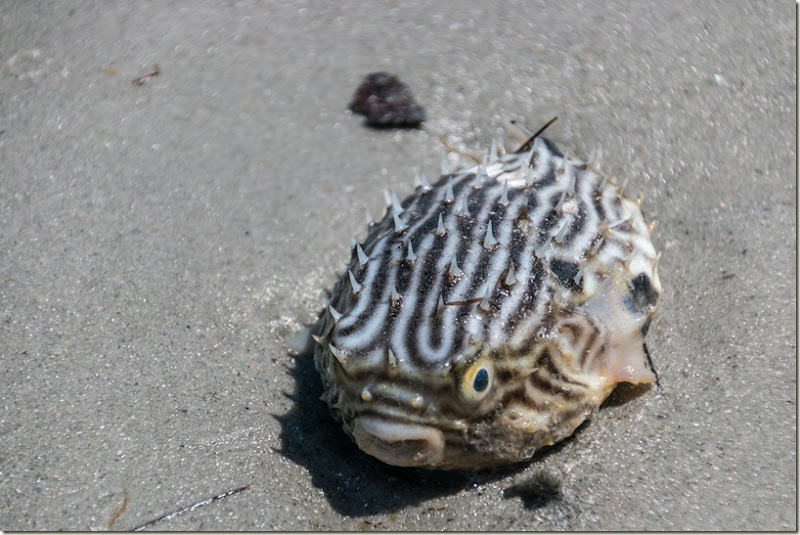 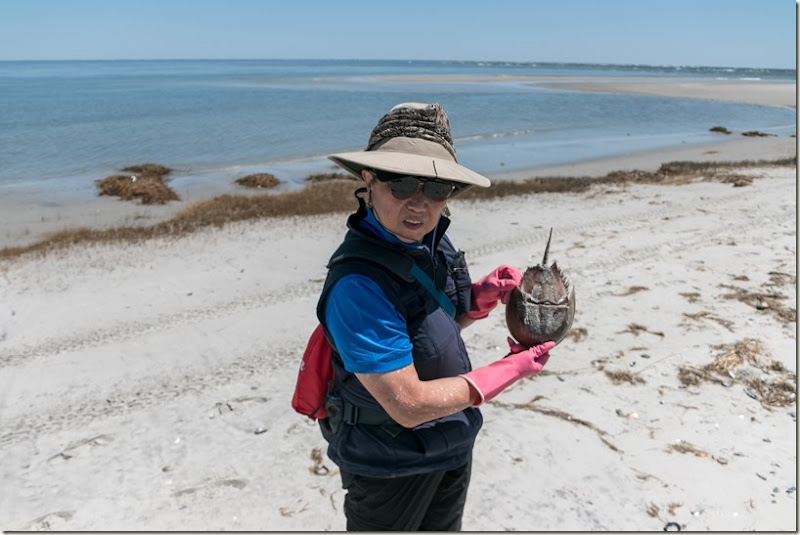 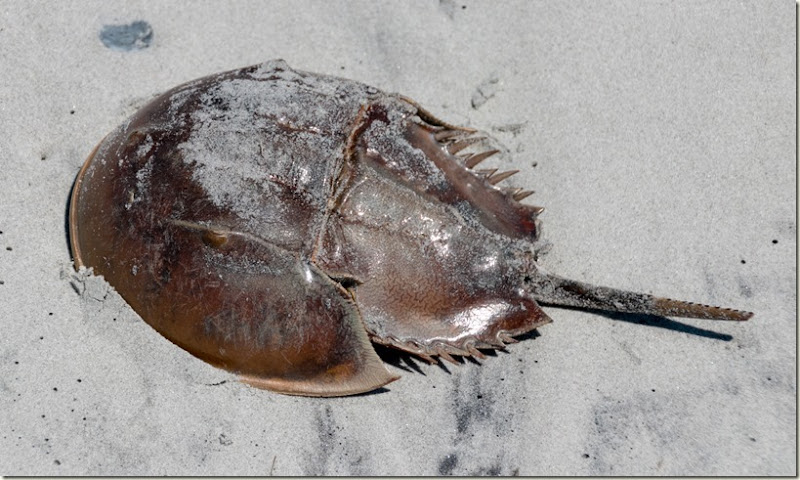 Heading back to the pickup spot you could see Ocracoke across the water. 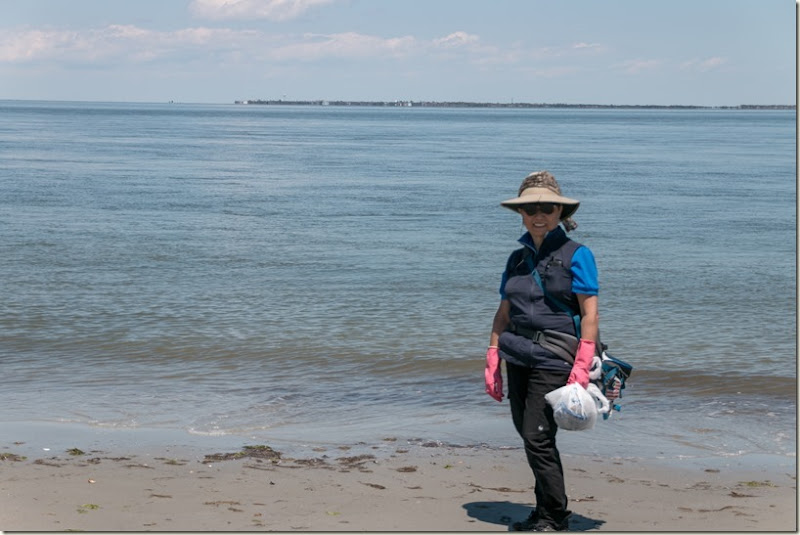 The captain was busy moving some pilings. The other boat had a water pump and a hose with a jet nozzle. They just put the nozzle in the sand and then push the piling and the nozzle down. It looked like it went in easily. 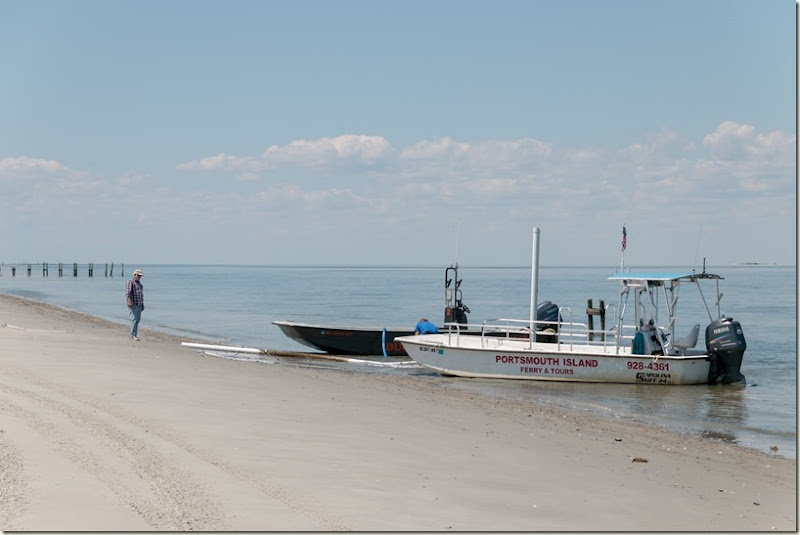 We got back to Ocracoke at about 3 pm. After another long day in the sun, we were quite tired so we headed home.

Another great day at yet another beach!