Today we drove down to Back Bay Wildlife Refuge and took the Blue Goose Tram Tour farther down to False Cape State Park. The trip was on some of the to do lists but I had not read another blogger talk about it so I was not sure what to expect.

Driving south from Virginia Beach you eventually go out on a thin strip of land with a sound on the west and the Atlantic on the east. It is actually part of the same strip that Corolla, with the Currituck Lighthouse, and Kitty Hawk are part of. Everything from the wildlife refuge all the way down to Corolla is protected land. 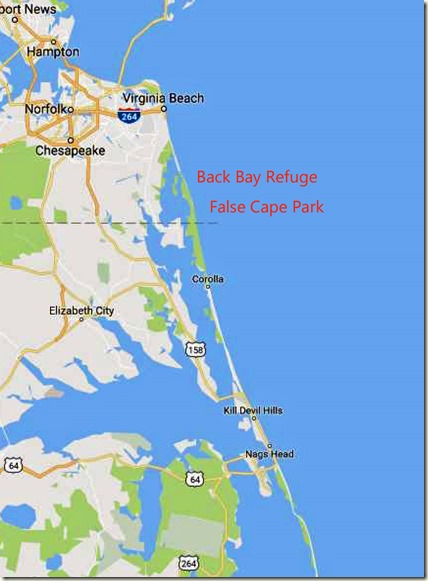 The tram runs once a day. It leaves at 9 am and gets back around 1 pm. I had hoped that it would drive us down there so that we could hike around for a while on our own and the drive us back. It turned out to be more of a guided tour.

It is a hour drive from the our current campground to the refuge, due to the low speed limits, so we had to get up much earlier than usual. It is also, first come first served for the tram so we got there about 1/2 hour early. There was no problem as the tram holds 24 and there were only 15 of us.

I think the main activity in the wildlife refuge is bird watching and mainly in the fall when the bird are migrating south. There was not a lot to see today. We drove on the narrow dikes between the ponds that the refuge maintains. 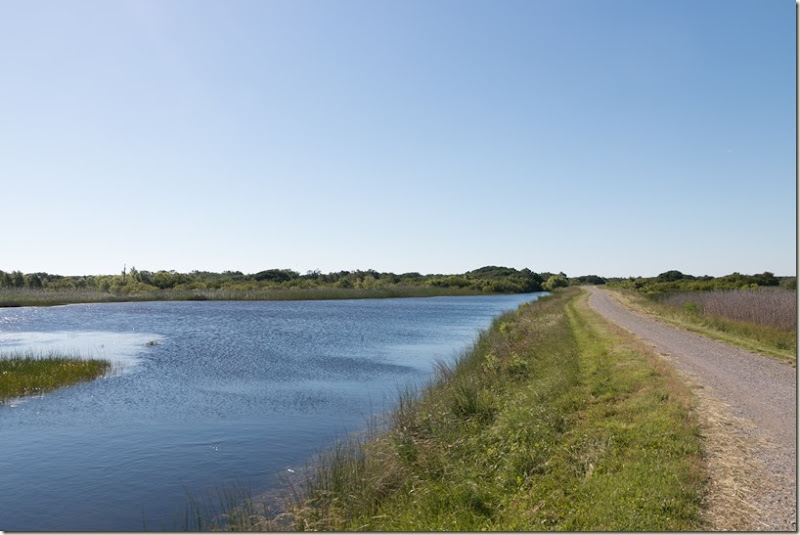 Whenever the driver saw a turtle or a snake on the road we would have to stop so he could move it to the side. We only had two turtle stops and one snake stop. The snake was too fast for me to get a picture. 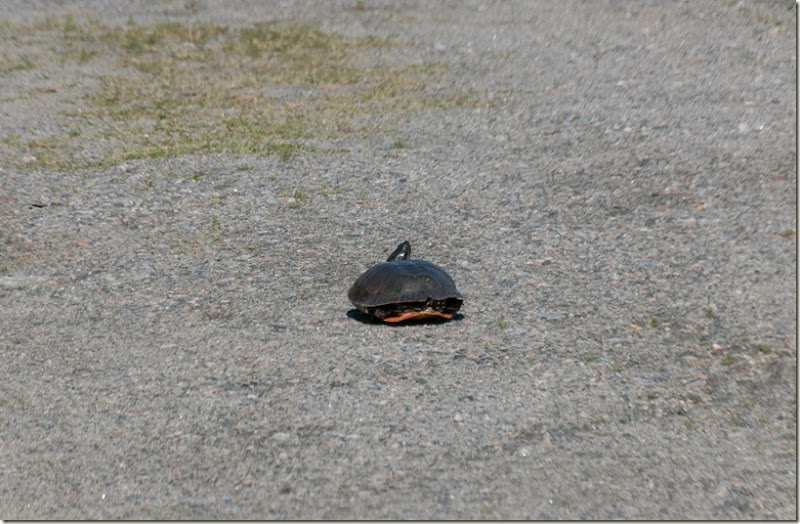 We saw a few far off egrets and some turkey vultures. 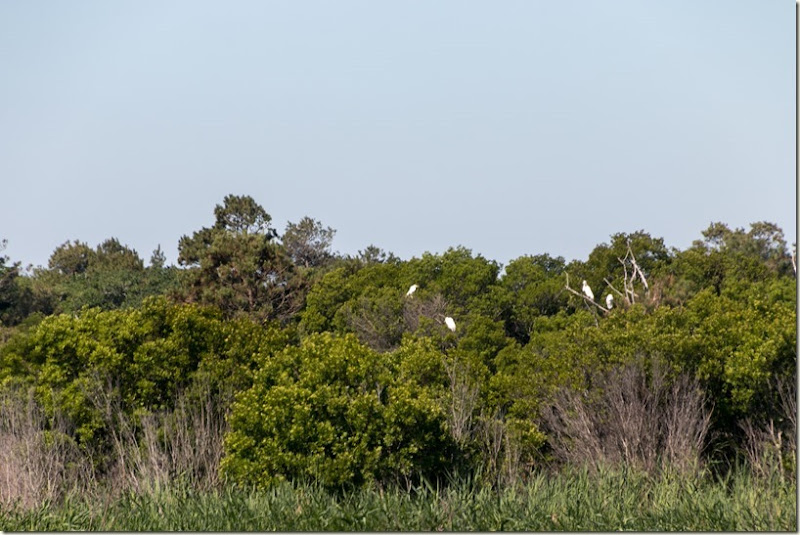 When the viewing is good they have this building for that purpose. 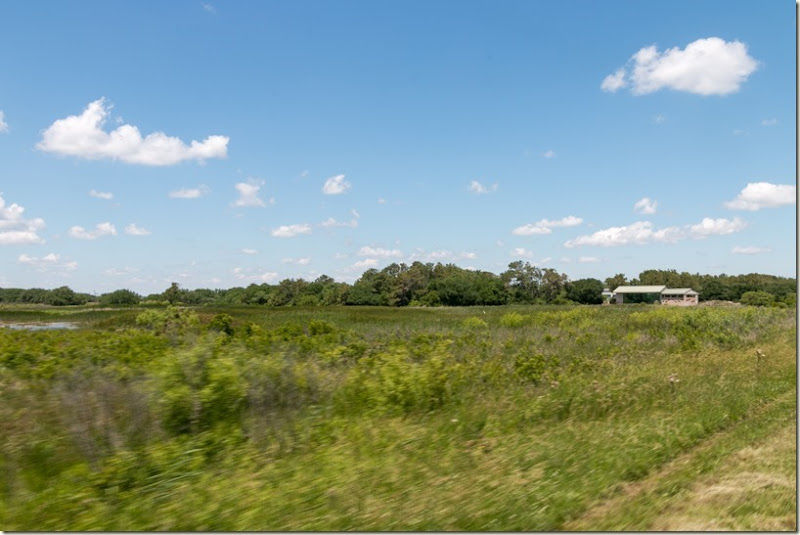 It has bleacher style seats behind a large wall of one way glass. The area off to the side has some small viewing slits that you can hide behind. 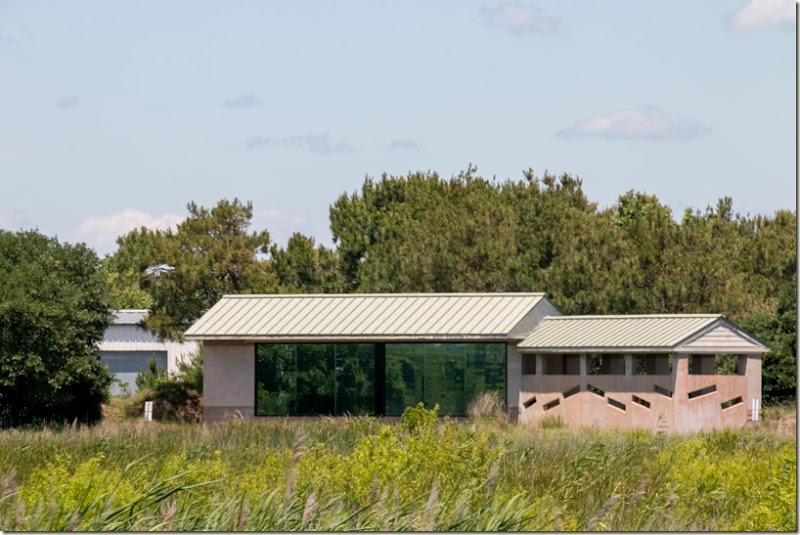 We stopped for a short break at the False Cape State Park visitor’s center. 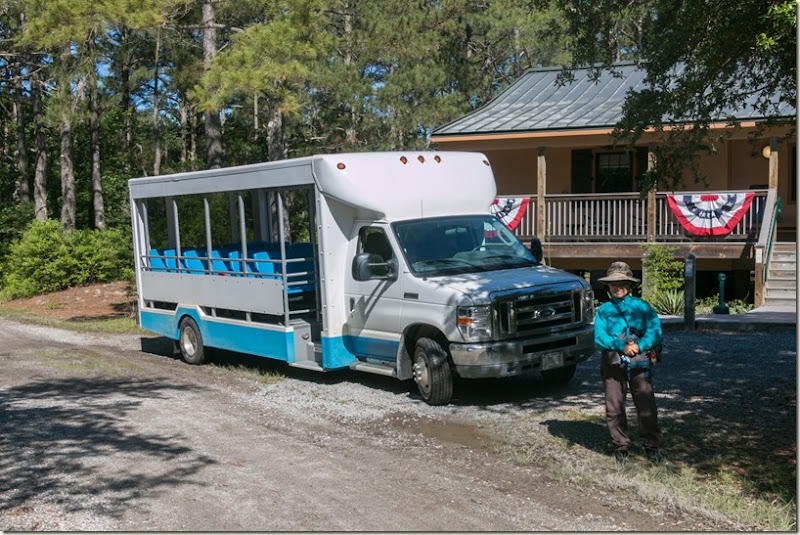 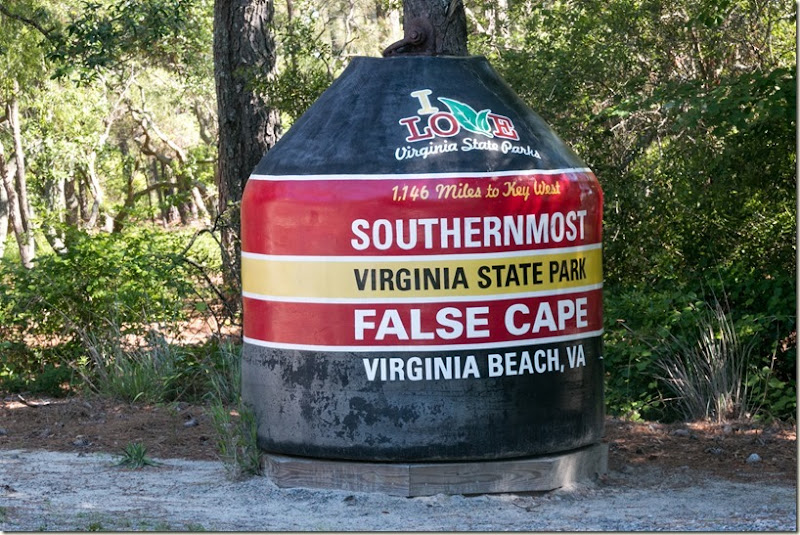 From here on we were in the forest. They didn’t make the road extra wide. The driver said to keep your hands in as, if they were out too far, you would get smacked by a tree. 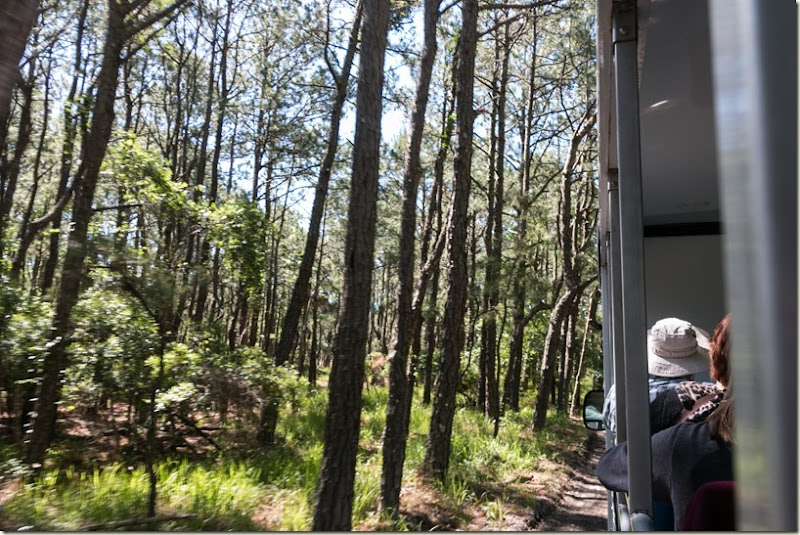 There used to be a community of about 50 families here, called Wash Woods. Our southern turnaround point was a stop for a short walk to what was left. 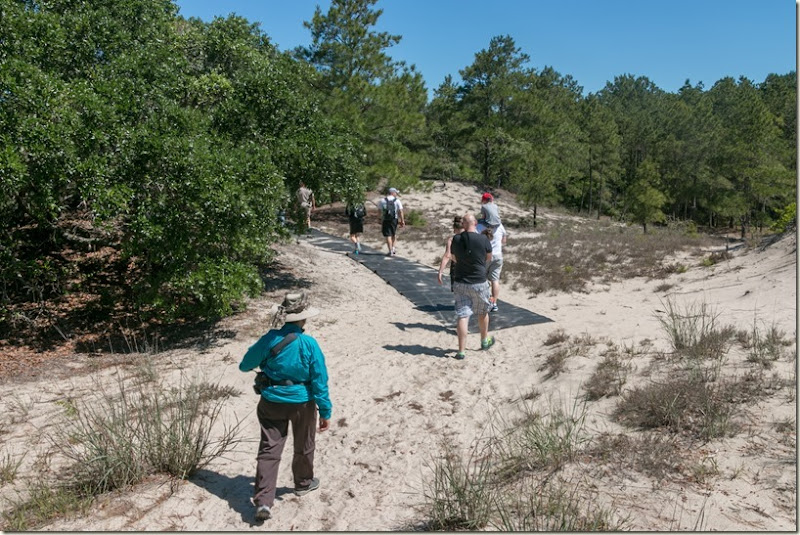 All that is left is a cemetery and a very old church steeple. People were taking souvenirs from the steeple so they protected it in this little building. The problem is that it was so dark in there that we couldn’t see the steeple at all. 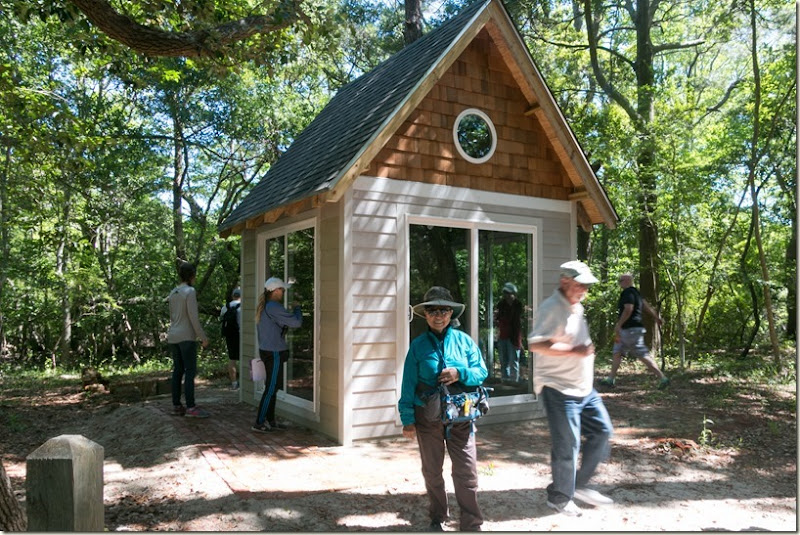 Around here, instead of flowers, people leave shells when they visit a grave. 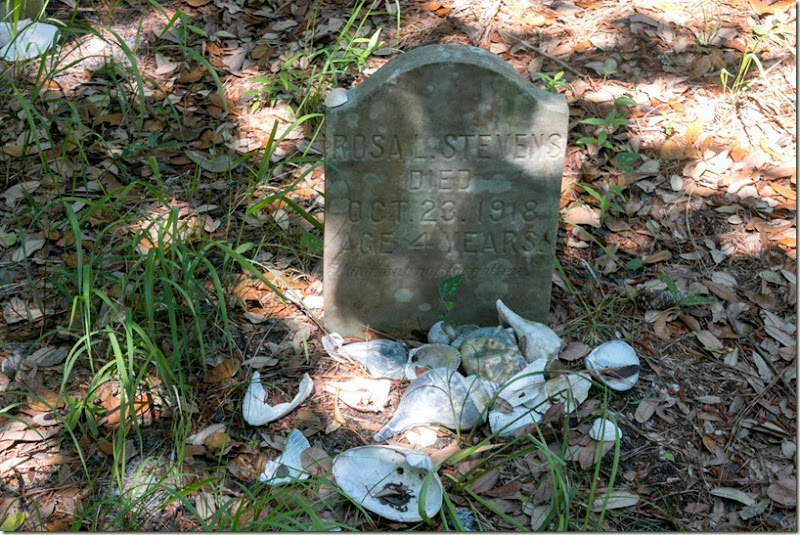 Heading back north, we stopped at a maintenance yard that had a view of the sound side of the cape.

There are no tides in the sound but the direction of the wind can dramatically affect the water depth. This dock is sometimes out of the water but was taking a beating today as the water spouted up between the boards. 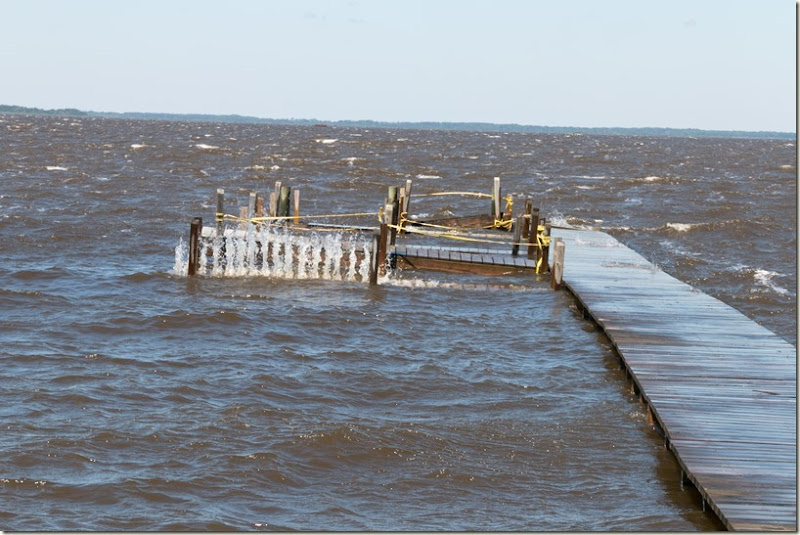 There were a couple of ospreys nesting on a platform just offshore. A bit too far away for a good closeup. 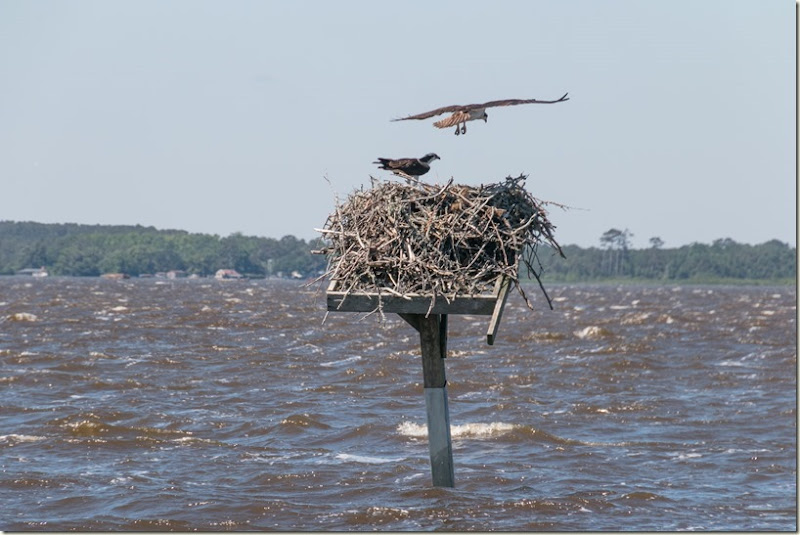 Back near the False Cape visitor’s center, the driver let those of that wanted to, off for a hike out to the beach. It was a 1.4 mile out and back trail and he only gave us about 1/2 hour so no dawdling.

This picture is coming back but the first part was still in the forest. 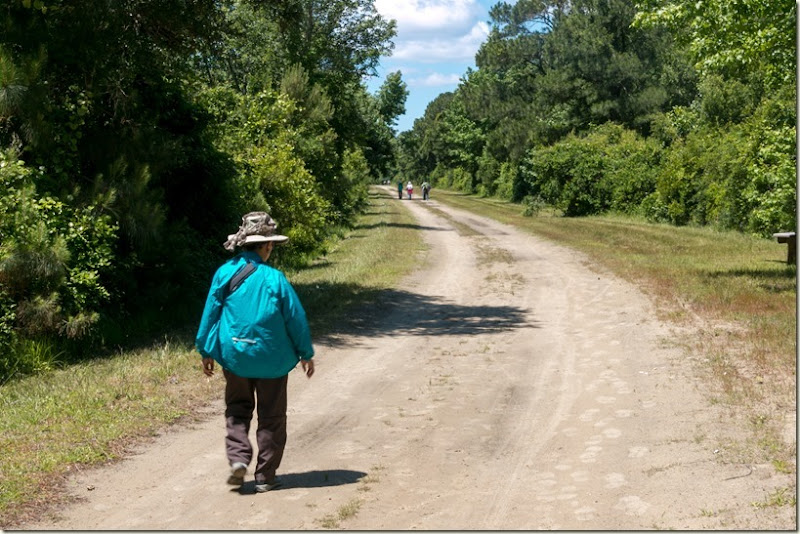 Just before we got to the dunes there was a small primitive campground. There was actually fresh water from a well. The only way here is to walk or bike. A few sites were in use. 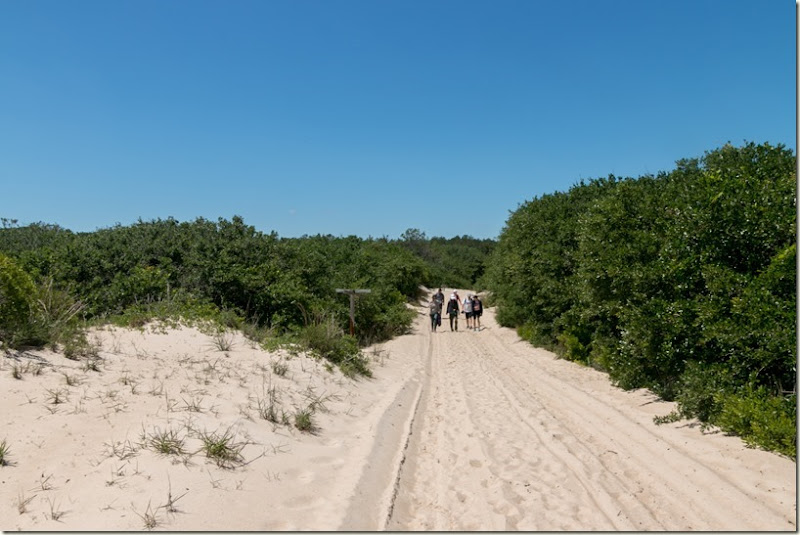 It was a bit of a trudge through the soft sand. 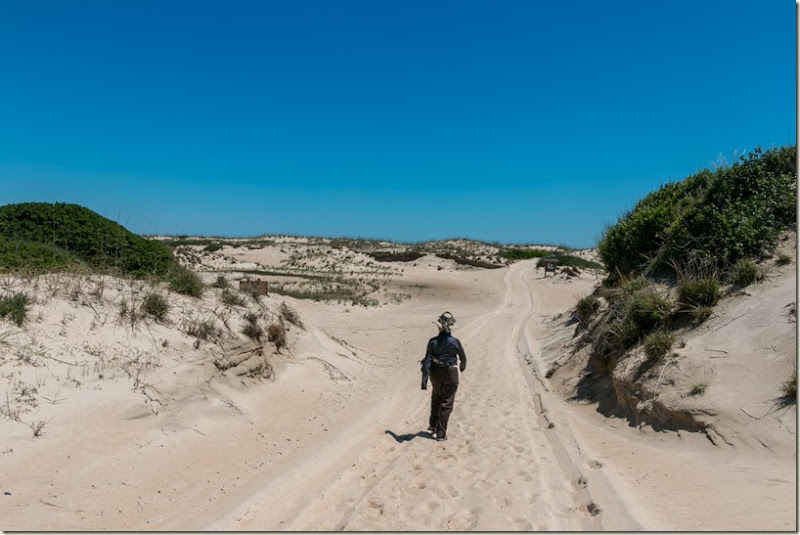 Another long almost empty beach. I think these campers were a bit annoyed that we had invaded their private beach. 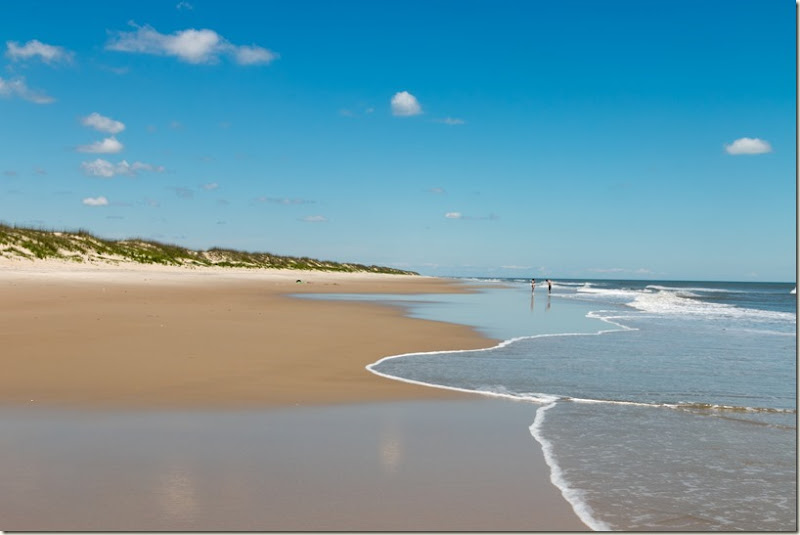 We didn’t have long before we had to head back to the tram. 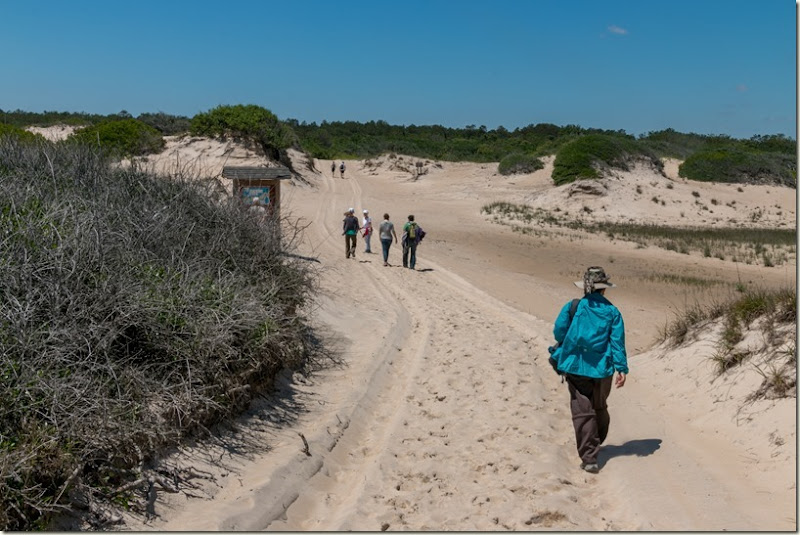 And then back to our cars. 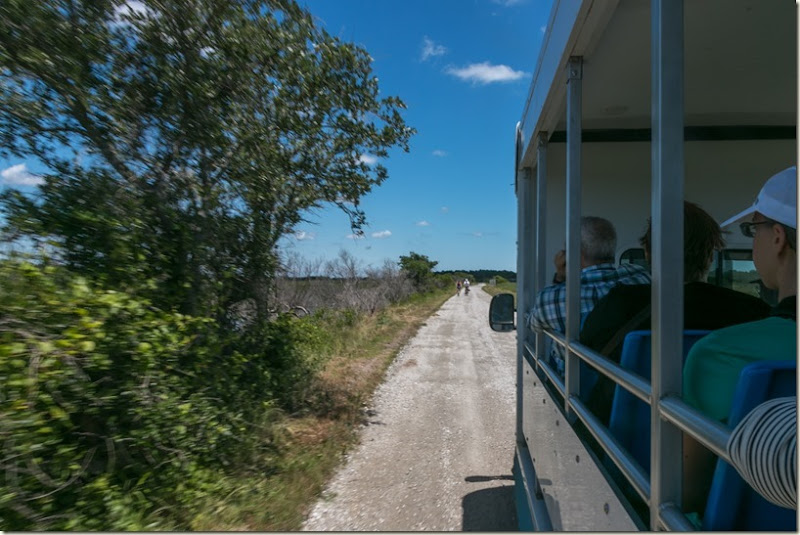 There was a British family on the tour with 3 very small kids. By now they were getting a bit restless. They hadn’t made the trek to the beach so Jennie gave them some of the shells that she had quickly collected. All but the baby were intrigued enough that they calmed down.

Once the tour was done we did a short walk out to the beach near the Back Bay Refuge Visitor’s Center, to have lunch. 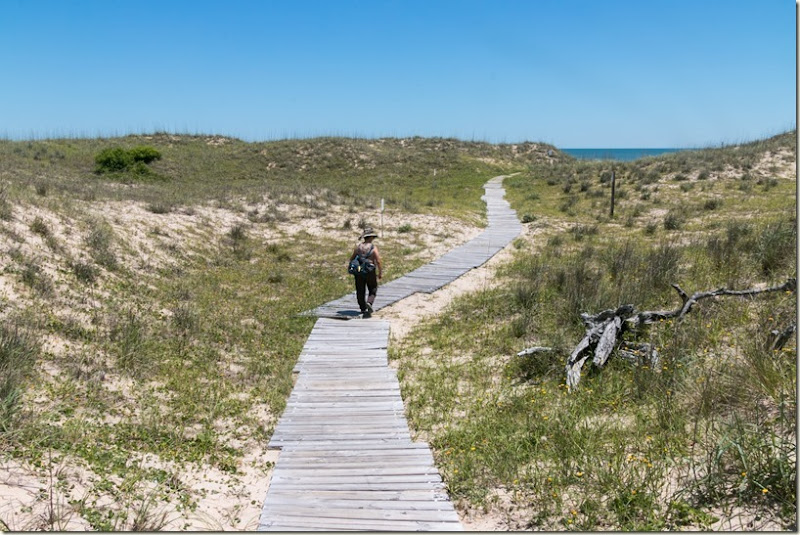 Empty all the way to Corolla to the south. 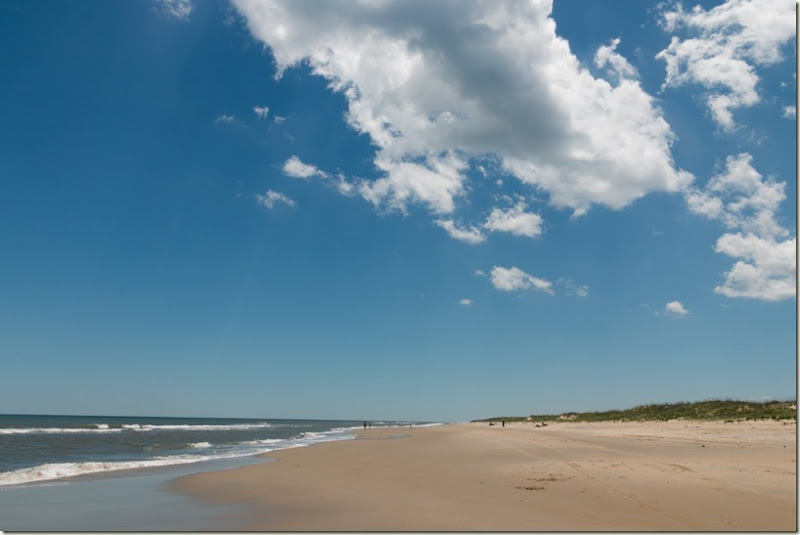 You could see the start of “civilization” to the north. 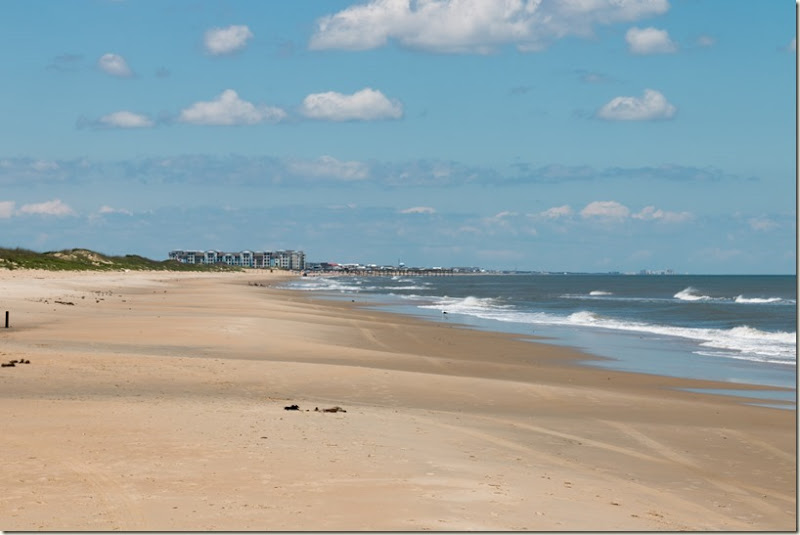 And off in the distance the bump of hotels in Virginia Beach along the boardwalk. 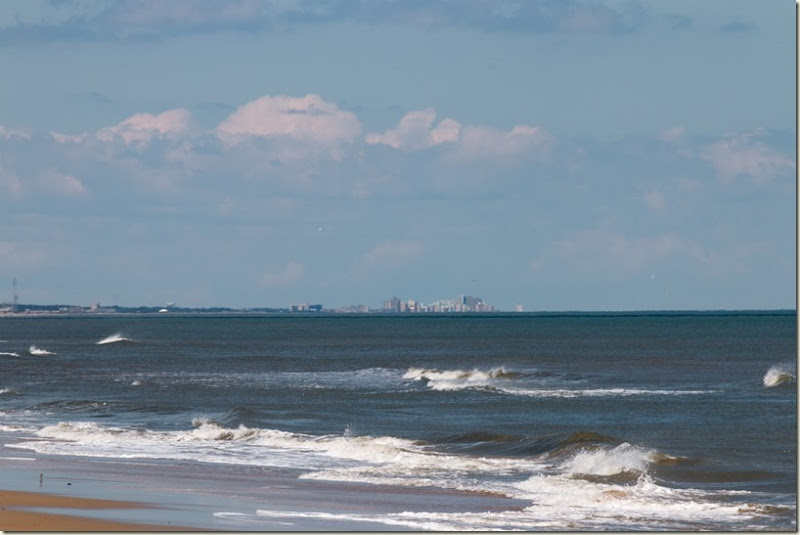 So not a super exciting day for our last one on the coast before we head inland but the weather was great and it is never terrible to be out in nature.