Today we headed back up to the top of the Sechelt Peninsula to hike out and watch the rapids at the Skookumchuck Narrows.

Before we left I read about a waterfall “not to be missed” that was a 2 minute drive and 5 minute hike from us. As this is our last day in the area we made a quick visit to Burnett Falls. 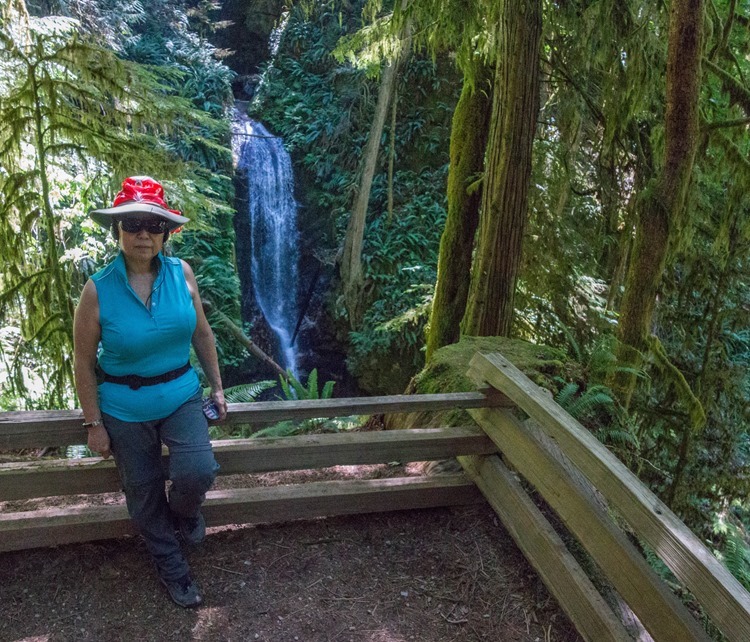 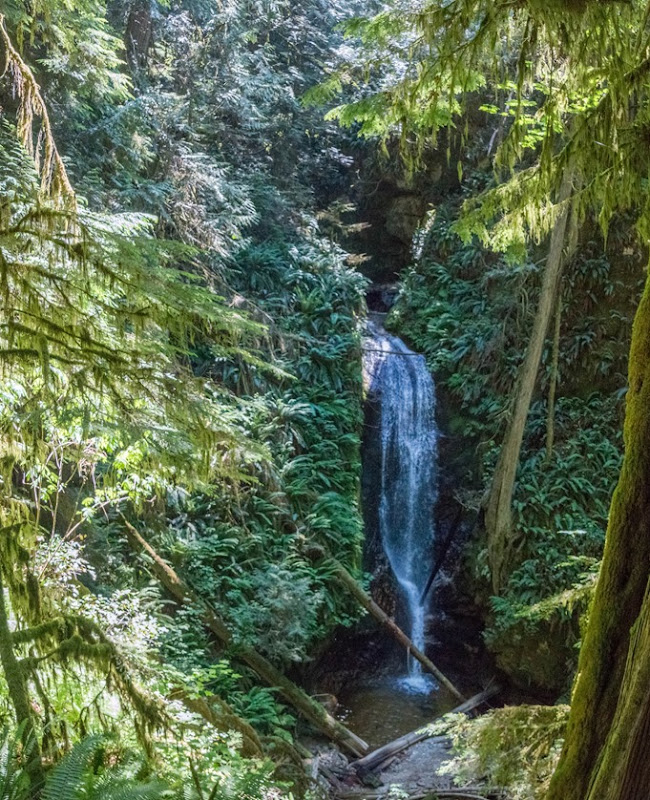 Since we couldn’t get much closer than this without a lot of work, it really was a quick visit.

It is a twisty slow hour long drive to get to the trailhead. It is also very close to where we took the boat cruise the other day. It would have been nice to do both in one day but after the cruise we were not up to a hike. 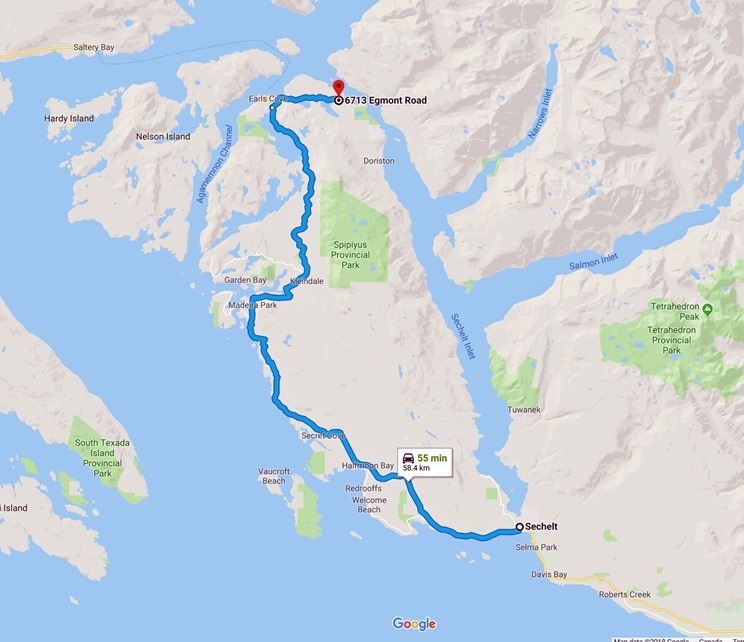 It is about a 7 km return trip to the viewing spot. The trail is wide and smooth with only a small bit of elevation changes. 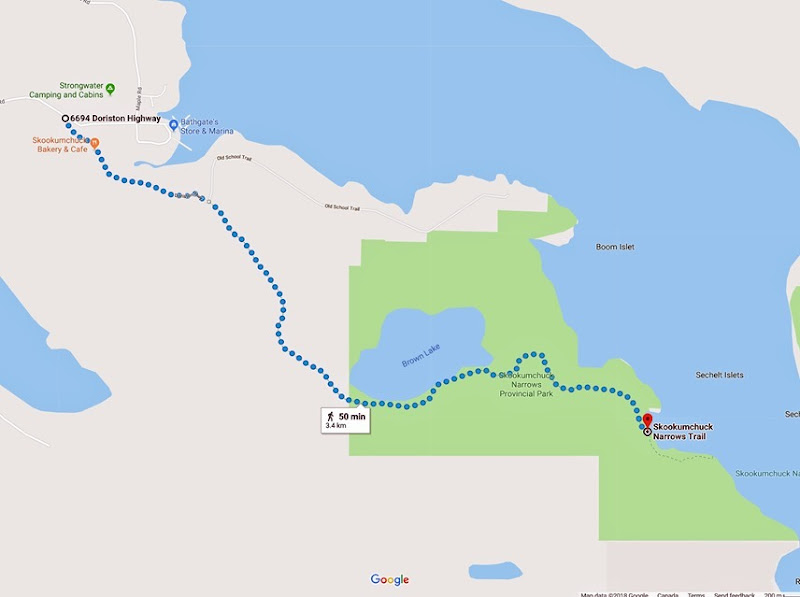 It was a hot one today. When we got back to the car it said the temperature was 29C in the shade. The first part of the hike is a short way down an open, sunny dirt road, used to access some private homes. Then, thankfully, the rest is in the forest. On the way in it felt cool. On the way out, not so much. 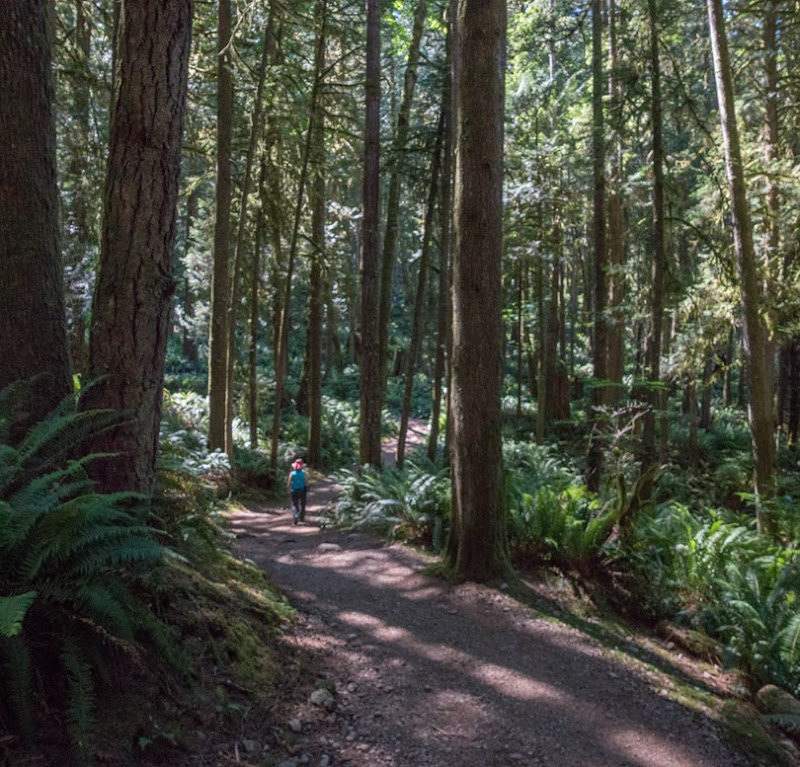 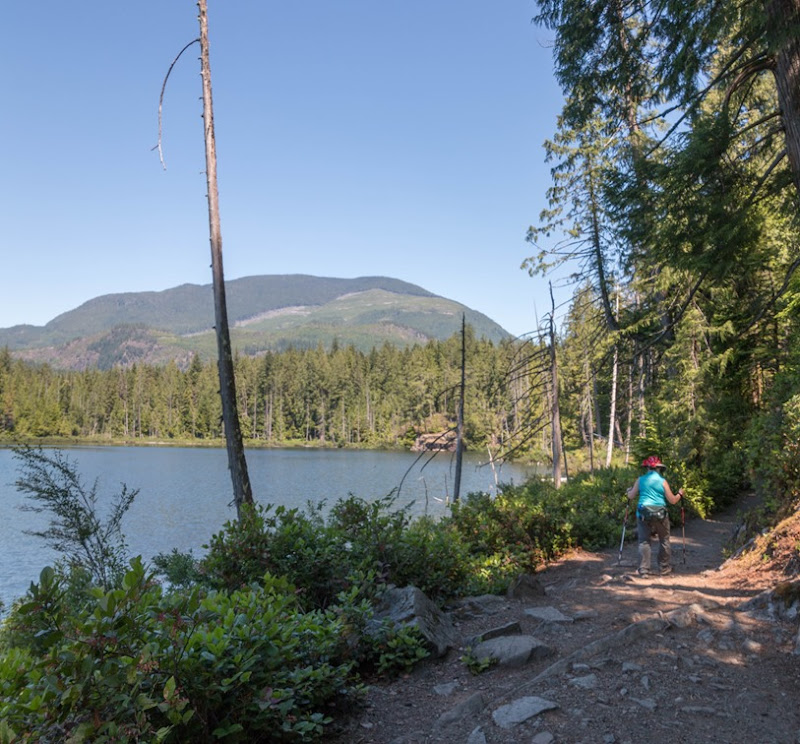 The Skookumchuck Narrows are the only entrance to the large Sechelt Inlet from the ocean via Jarvis Inlet. At peak flow the current runs at about 30 kph. The difference in water level from one side of the narrows to the other can be as much as 2 meters.

During an incoming flood tide the current forms some standing waves that the kayakers love. During an outgoing ebb tide there is a curved point of land on a islet that causes the water to swirl and create a lot of whirlpools. 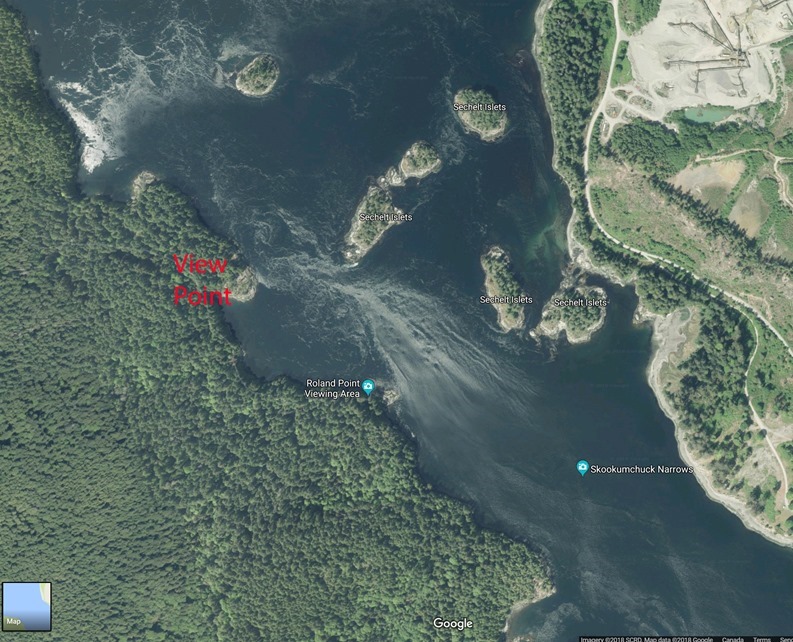 Today there was an “extra large” ebb tide flow at 3:17 pm. They say it takes an hour to hike in but we always take longer and you always want to get to the narrows before the actual time. We left Sechelt around 12:30 and started the hike at around 1:30. I though we were being extra early but a lot of others started with us and there were even more waiting when we got there. 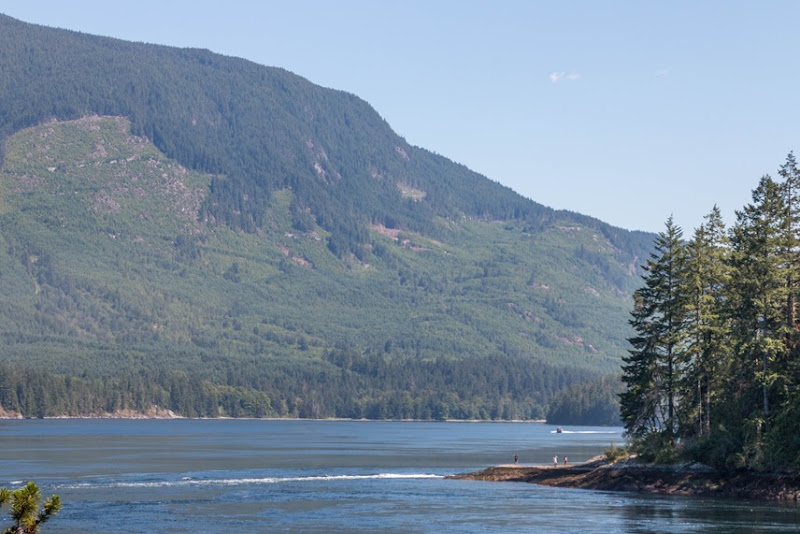 We had had a late breakfast so when we arrived we had our late lunch, after picking out a piece of shade. 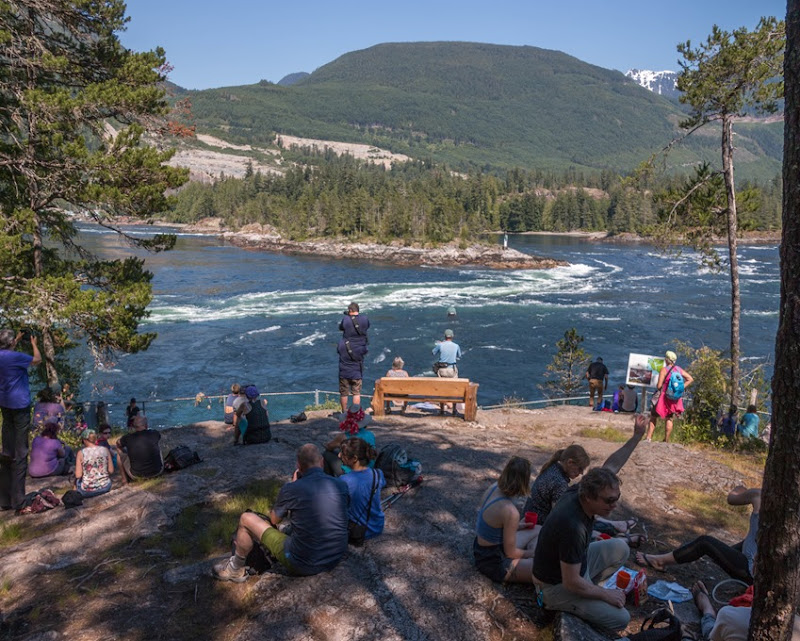 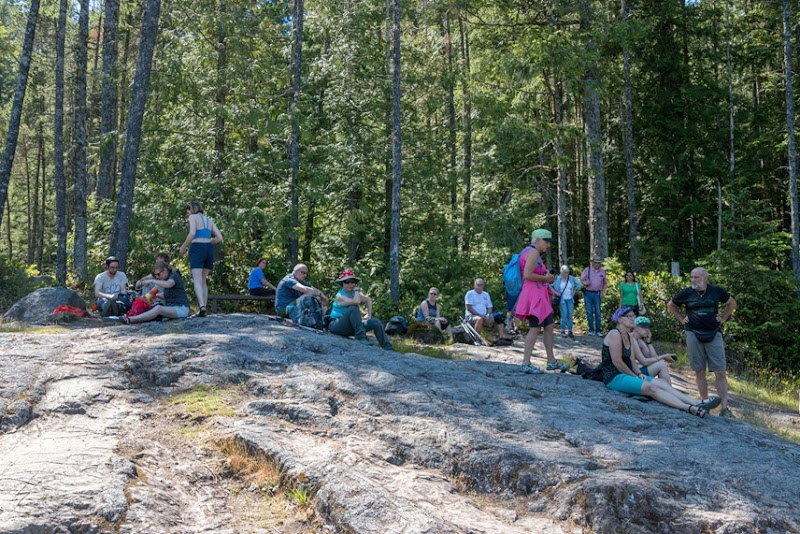 A photosphere from near our lunch spot.

And a photosphere from down by the fence.

There were a succession of people (even me) trying the bench but it was just too hot to stay very long. 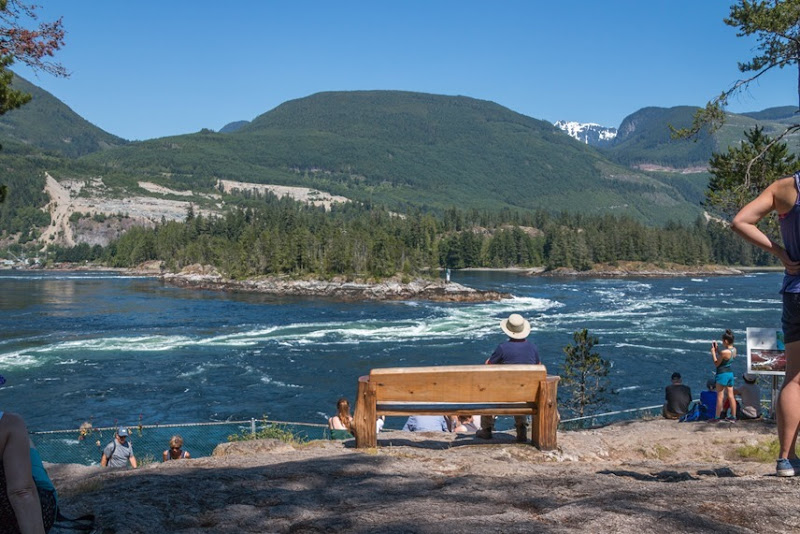 Watching the massive whirlpools swirl away from the point. 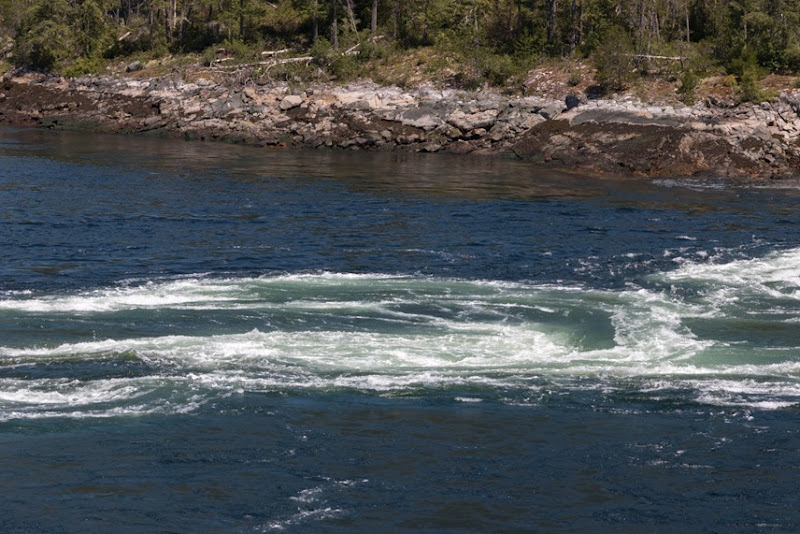 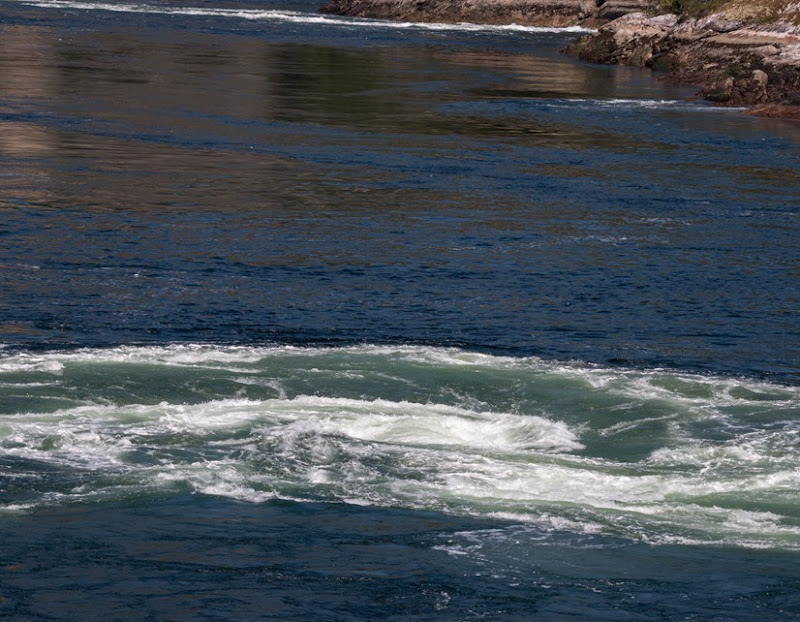 This really calls for some motion.

Some people got a closeup view. 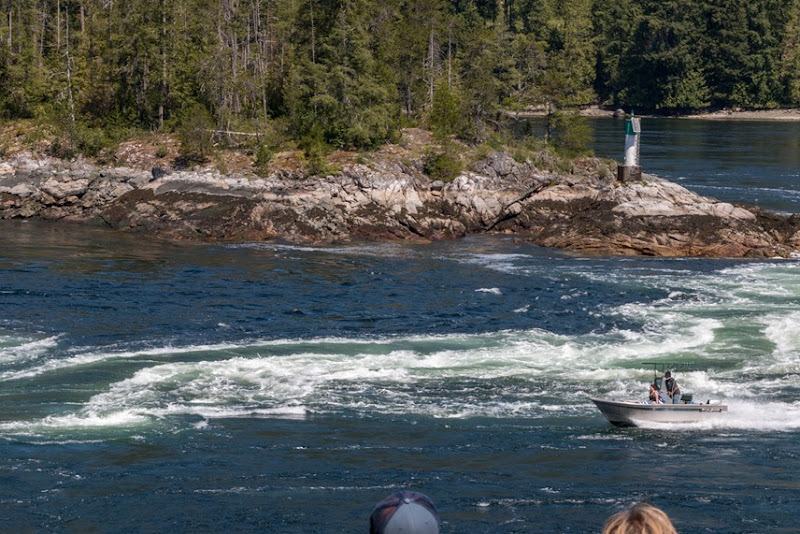 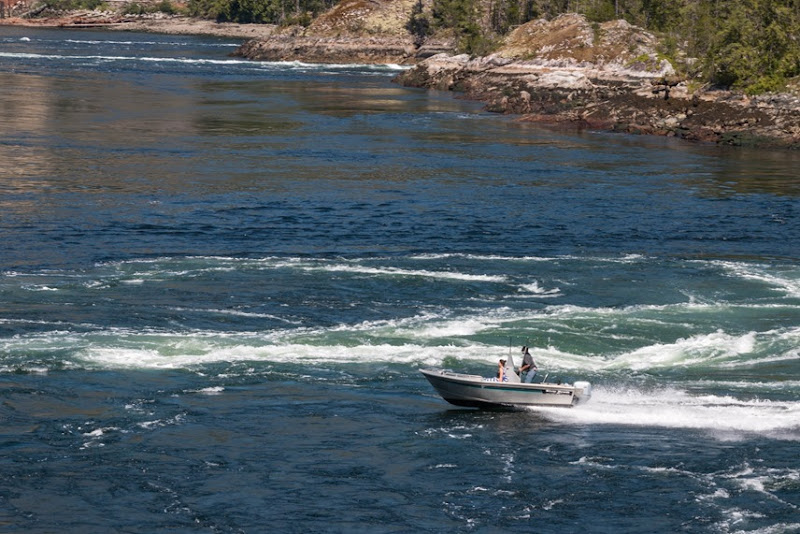 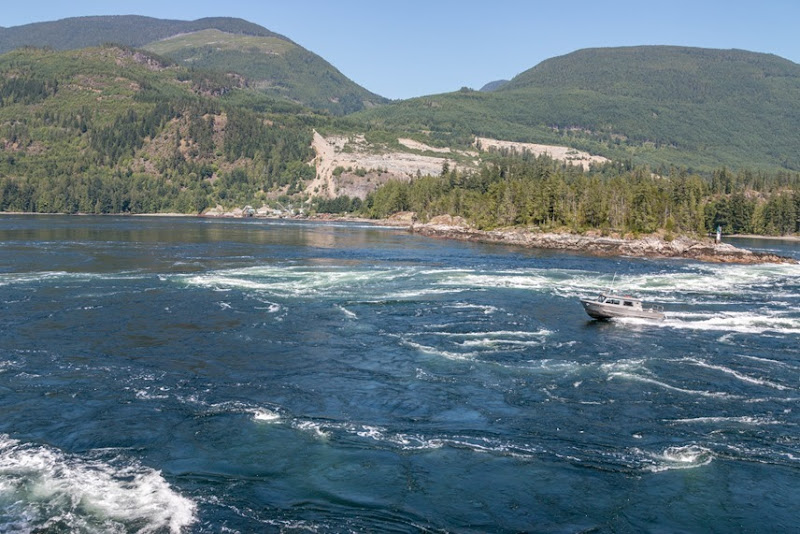 The wide view with the boat at the far right.

We even had a plane fly over. 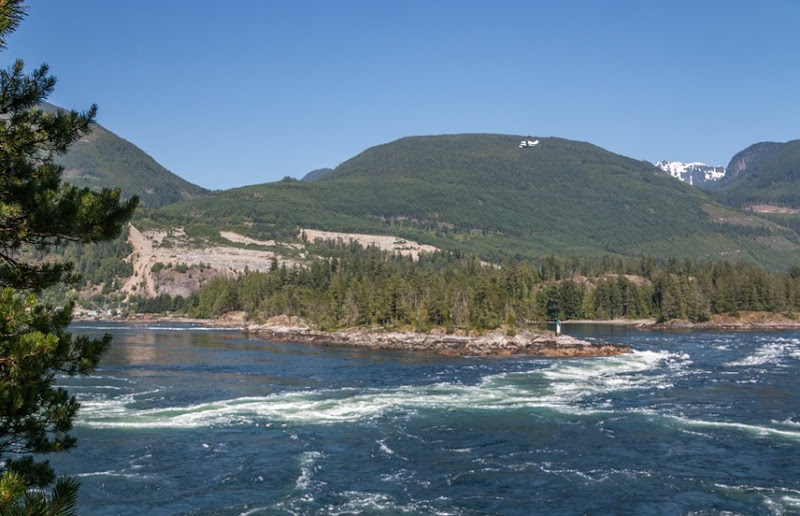 You can get some idea of the height difference by looking at the almost waterfall at the point. 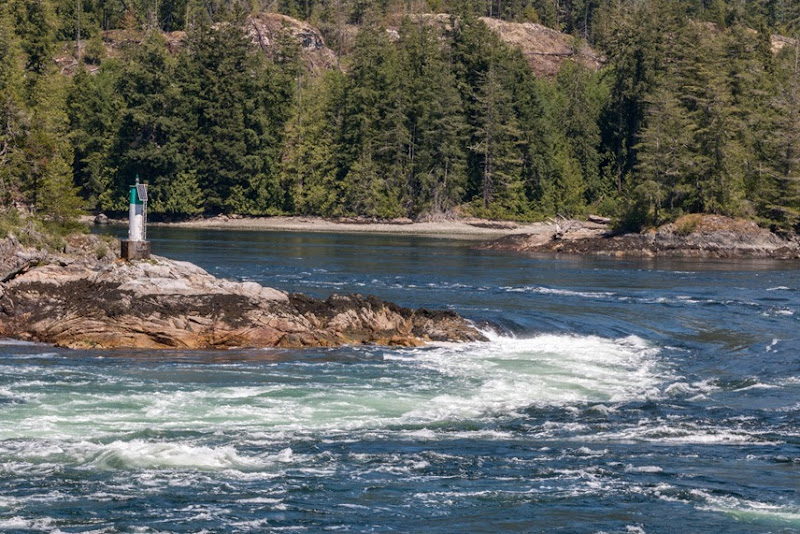 Down at the fence we watched some small whirlpools float by. 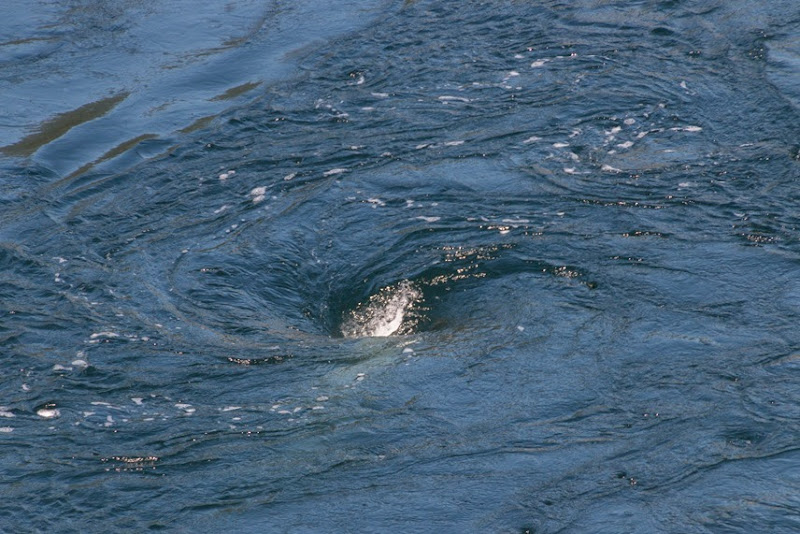 On some we could see the swirl underwater. 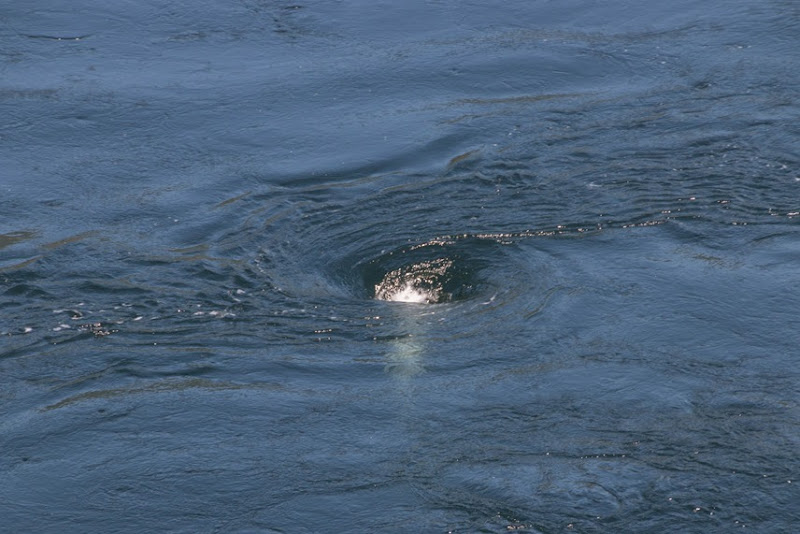 And this nice double one. 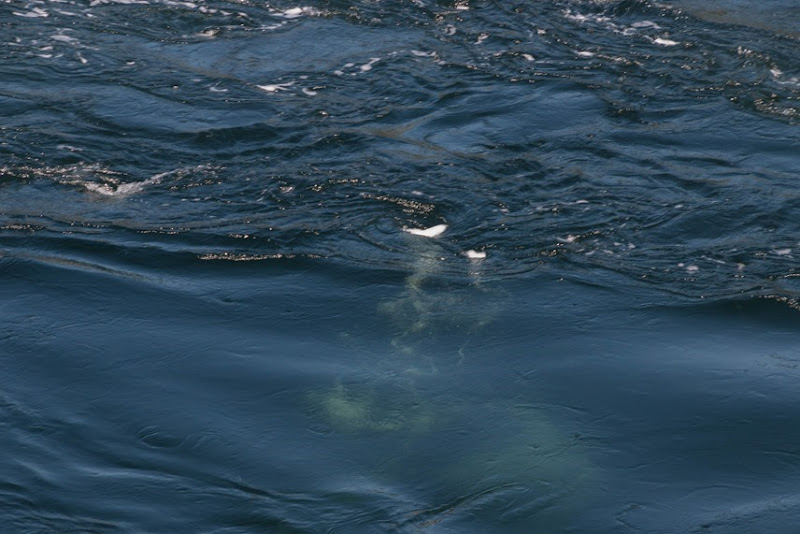 We actually didn’t notice a huge difference in the rapids between when we got there and the peak time. Afterwards we did notice that it was tapering off but very slowly. We left at about 3:45.

One more large whirlpool shot with yet another very scenic gravel pit in the background. 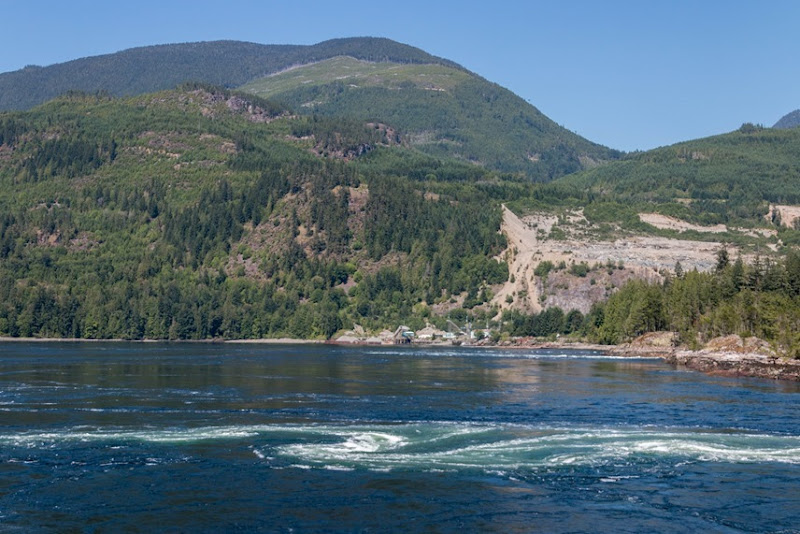 I guess a lot of people don’t know about the best viewing times but they are published online and at a signs in town and at the trailhead. It seemed strange that when we were walking in, there we a fair number of people heading out, so close to peak time. Again as we were leaving there were still people going in.

On the way out we passed by a couple stopped on the trail with a young child screaming her brains out. A short while later we passed a stroller parked at the side of the trail. I guess the trail got too rough for the stroller and that kid just did not want to walk. 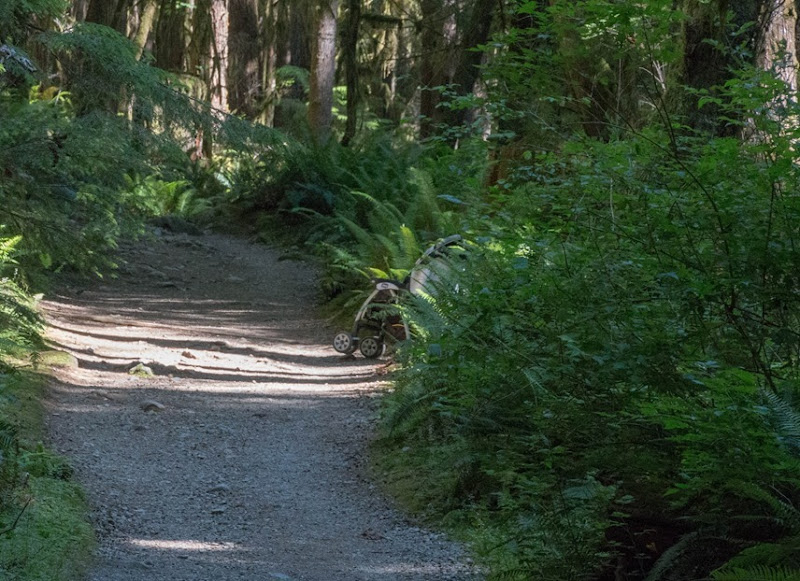 The trail was mostly smooth with just few rocky spots. We did see a family push their bigger tired stroller all the way in.

And then the long drive home.