Yesterday it rained rather hard all day. We spent some more time with the friend that I work with long ago. He suggested that we go out to dim sum for lunch. We drove to his place and then he drove us out to Richmond to an area with a lot of Chinese restaurants and malls. We haven’t had dim sum in a while so it was a nice change.

Afterwards we wandered around one of the malls and Jennie checked out the Japanese dollar store called Daiso. There were lots of unique things that you wouldn’t find in the Canadian version.

One thing you don’t usually find in a mall is a Mercedes dealership. 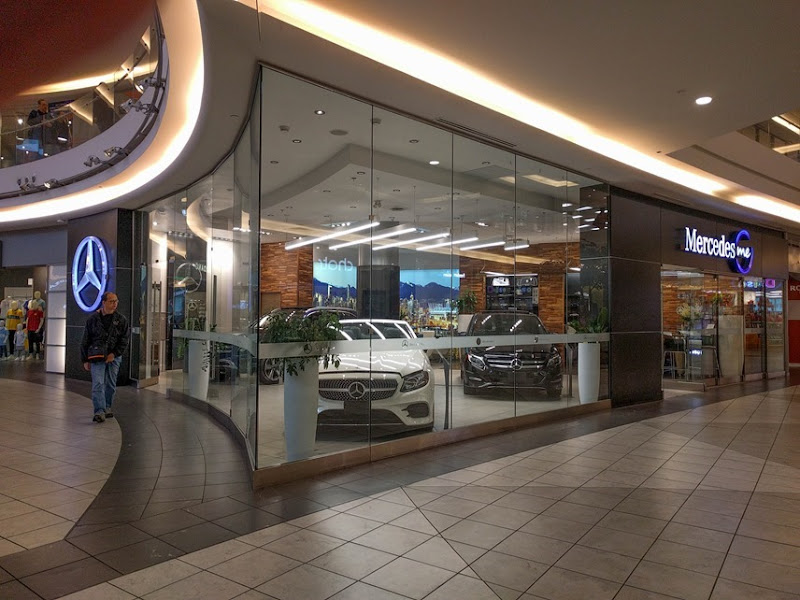 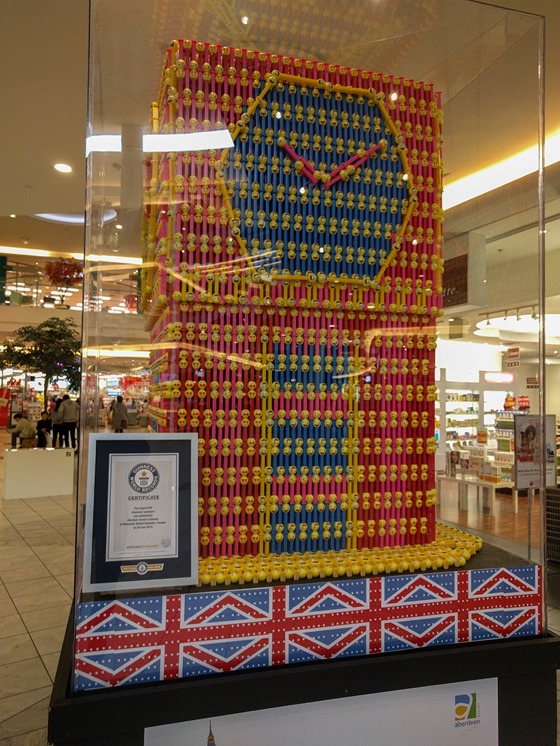 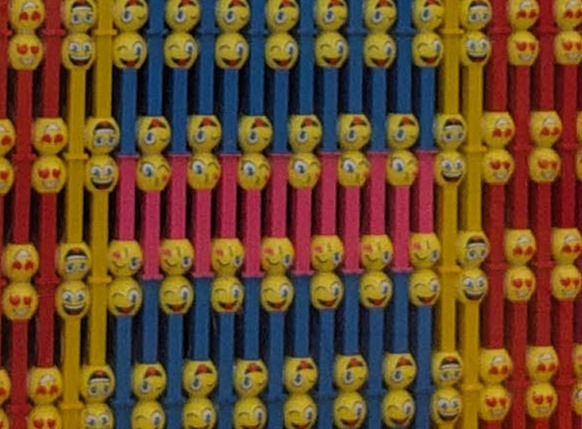 While he attended to an appointment we went to a huge mall near his house and Jennie got her fix of retail therapy. Afterwards we had a great BBQ dinner at his place with his wife and son.

Today the forecast was calling for showers and thunderstorms but after a bit of rain the morning it was bright and sunny all day. We headed up into the hills above the north shore of the Burrard Inlet to visit my cousin and his son and daughter.

He lives in an off grid house deep in the woods. To get there we had to drive passed what must be some of the most expensive real estate in the country. They get amazing views down on to the inlet and Vancouver and I am sure the pay for it. These two monsters were in the process of being built, blasted into the hillside. 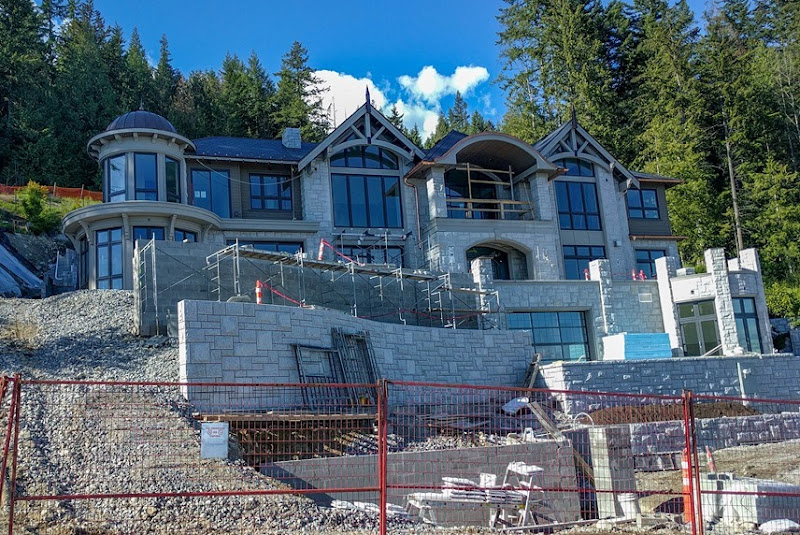 After climbing high up above these homes we took a very rough single lane dirt road about a kilometer into the woods.

His house is completely off grid powered by propane and batteries. I asked him about solar but he said we doesn’t get enough direct sun in the tall trees so he has a generator to charge the batteries. Their water is from an artesian spring. 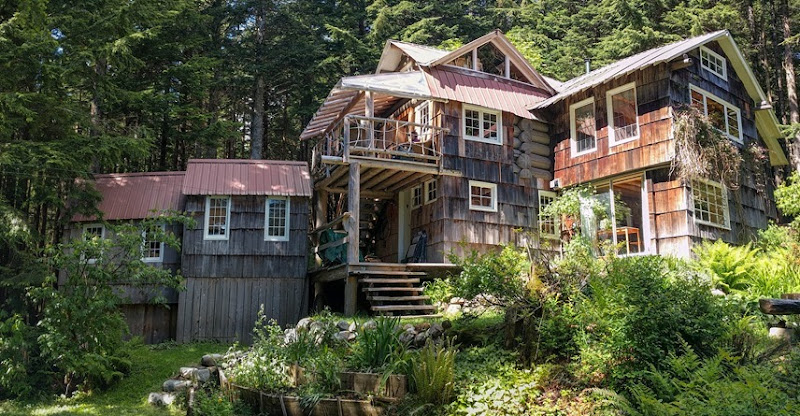 HIs bedroom is bottom right. Above it is the kitchen and above that is the son’s loft. The daughter’s loft is by those triangular windows in the middle at the top. There is no room for stairs so there are steep ladders to get you between levels.

After a great lunch we did a hike to get a tour of this unique area. In all he said there are about 100 cabins spread over a wide area. At one time there used to be over 200.

He and 5 other people are the only ones that own their property and live there full time. They are also the only ones that have part time road access.  In the winter the road is under a lot of snow so he has to walk or snowmobile in. Mostly he walks.

The rest of the cabins are on public land and only get 10 year leases that only include the land covered by the cabin and the adjacent outhouse. There are no road to any of them and some have quite the walk either up from the bottom or down from a road at the top. He said that most people come down from the top because it is easier to carry all the heavy food, etc downhill.

The cabins may only be used part time and there are strict rule about any changes. He said most are mainly used in the winter as they are close to a large cross country and snowshoeing area.

Our hike took us upwards first along a stream. 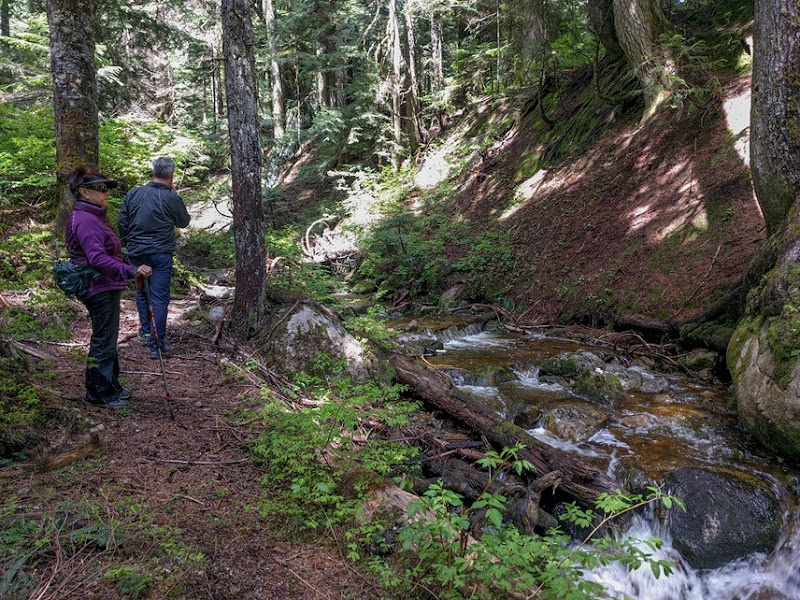 And then in a loop along some of the many trails that crisscross the area to give people access to their cabins.

There was no snow around his house but just a bit higher it started. 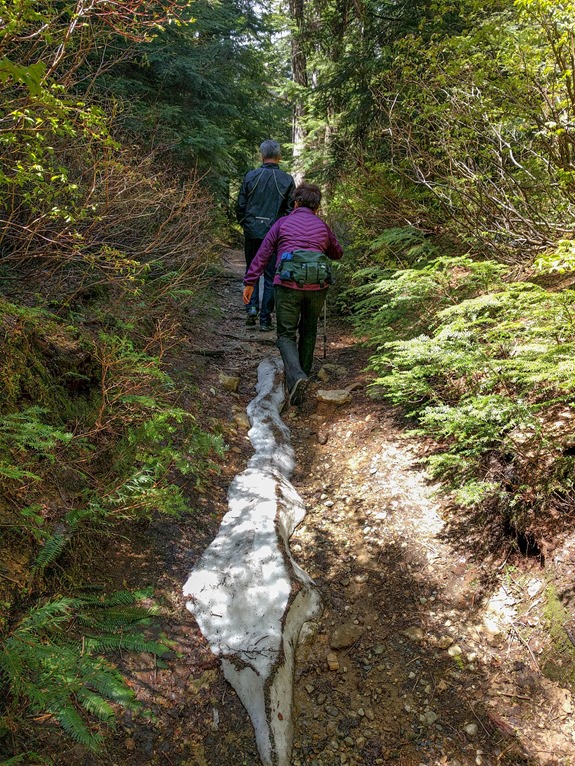 At about 100 m higher there was a lot but it was hard and easy to walk on. 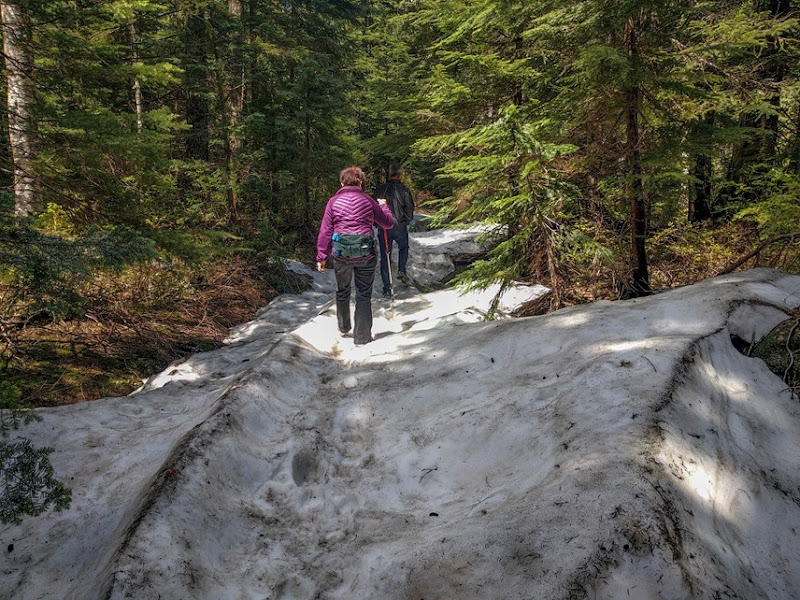 Most of the cabins have been here a long time, since the early 1900’s. They are mainly a single room with a loft above and maybe a porch. Since they are so old a lot of them are being renovated but they cannot be made larger. 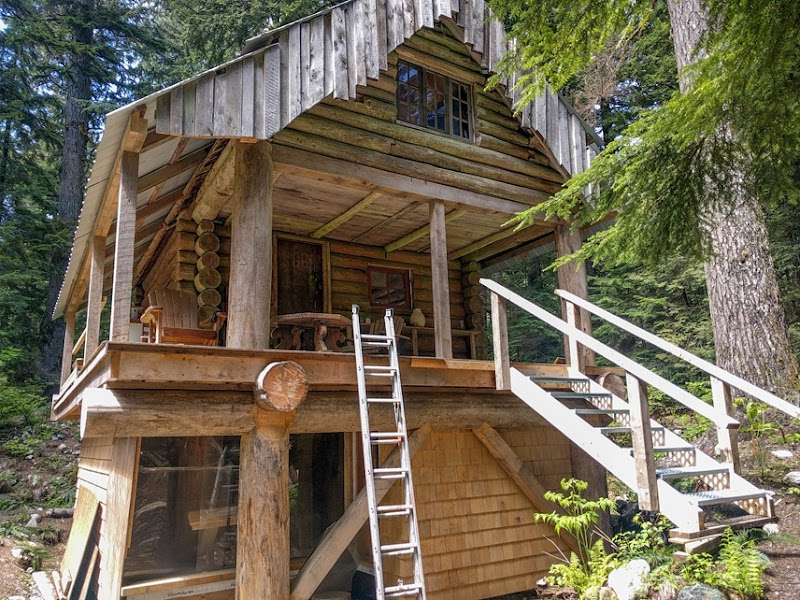 I asked why they and the outhouses all seemed to be up on stilts. It is because of all the snow they get. In the winter that is close to “ground” level. 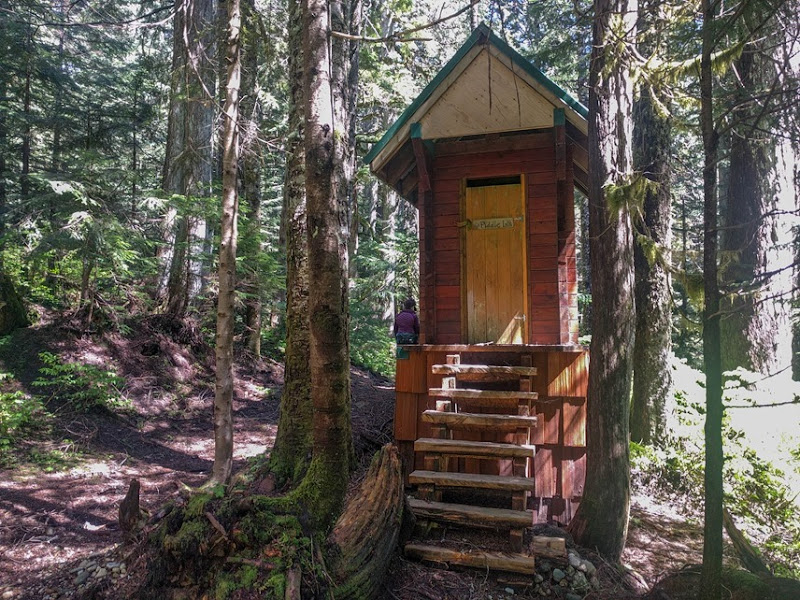 Even the older ones now had metal roofs to let the snow slide off and not crush the building. 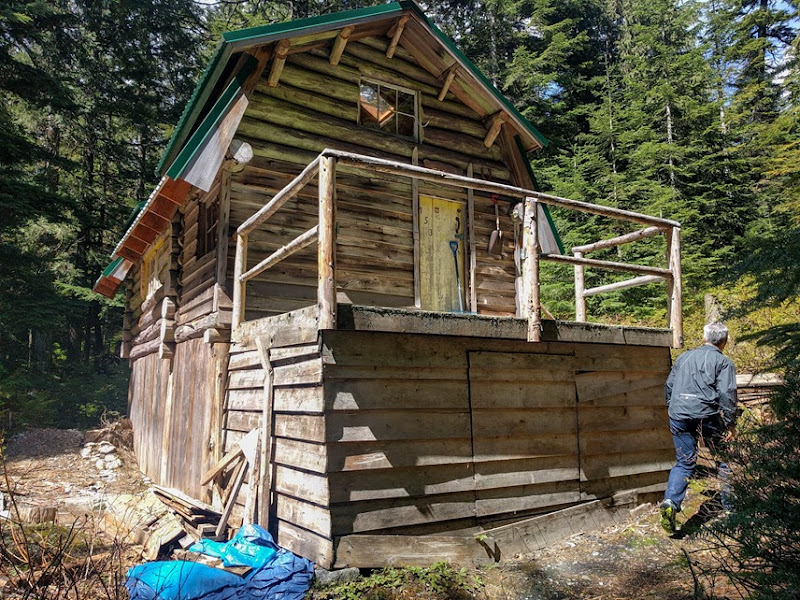 I guess this one was allowed to expand a bit. 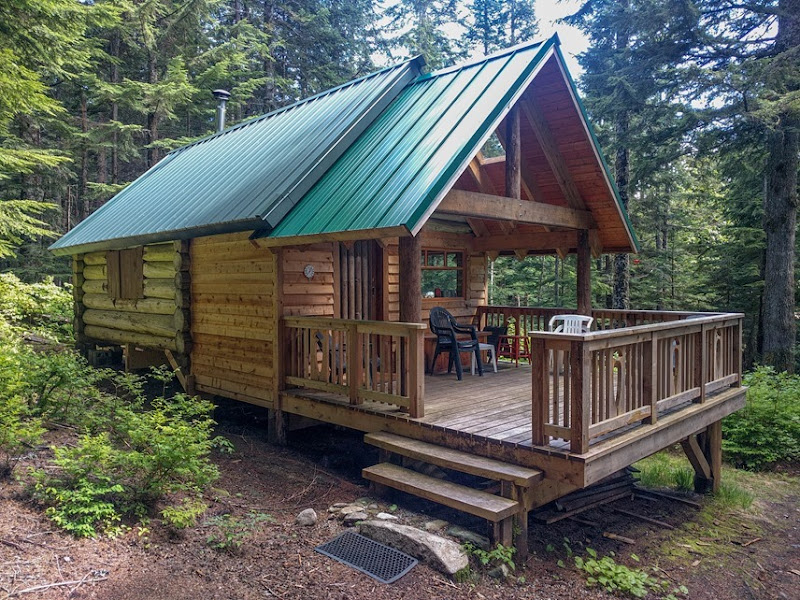 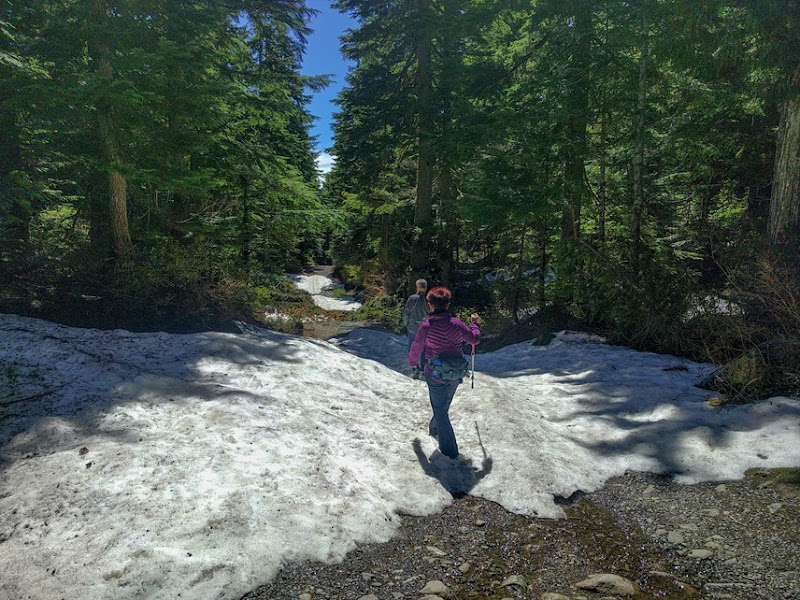 A photosphere at a lake at the top of our loop. 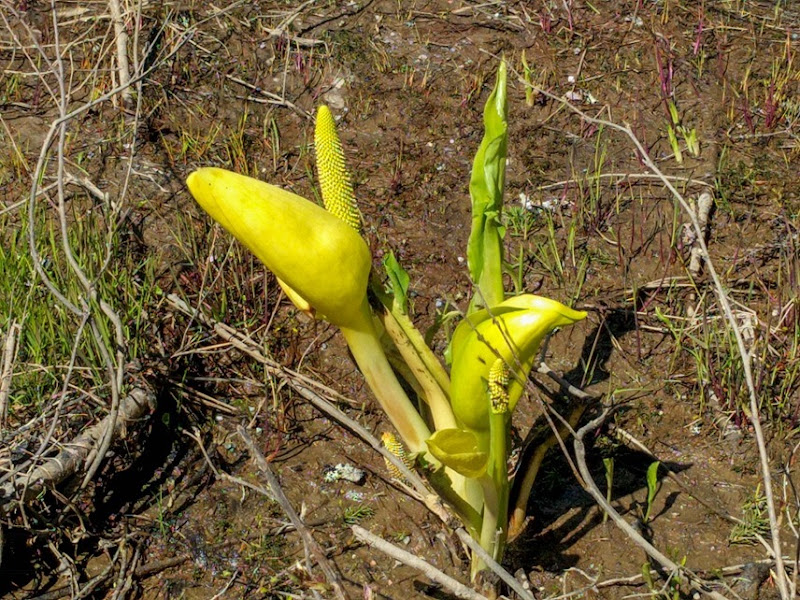 The girl guides own one of them for winter expeditions. 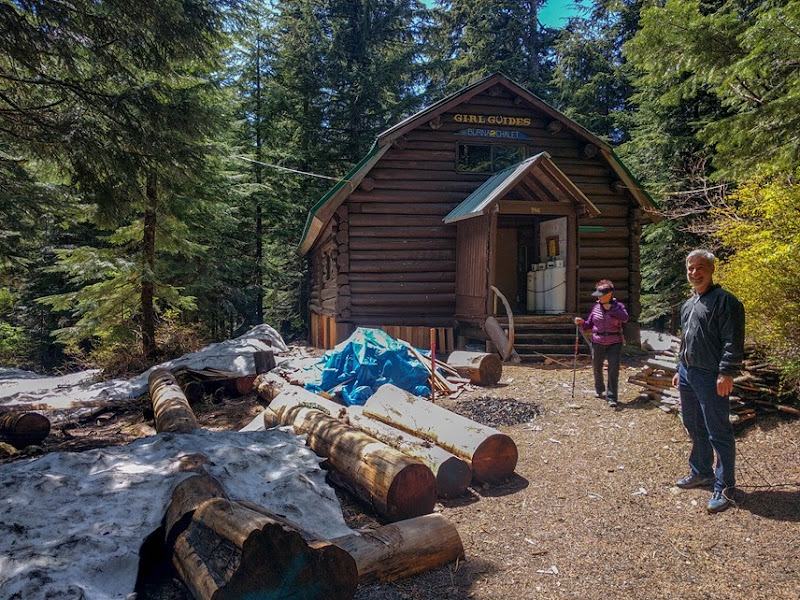 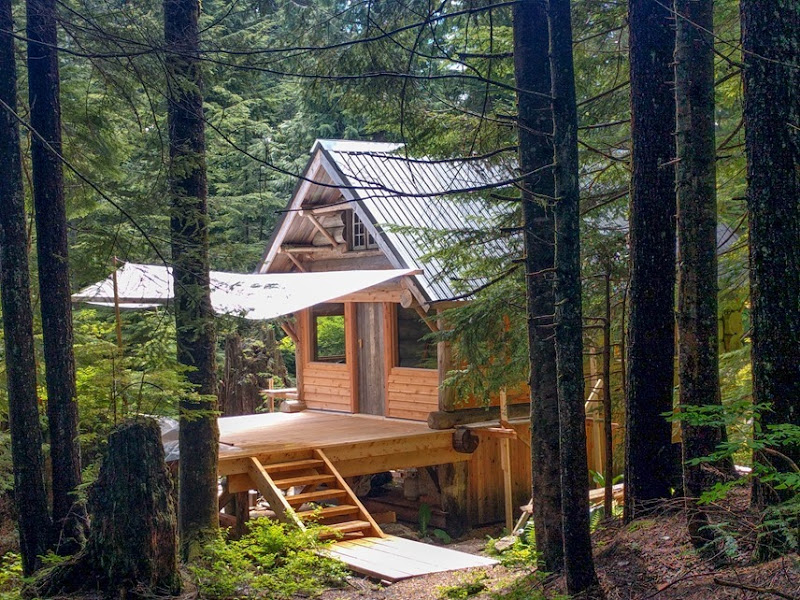 It must be a fun trip out in the snow. 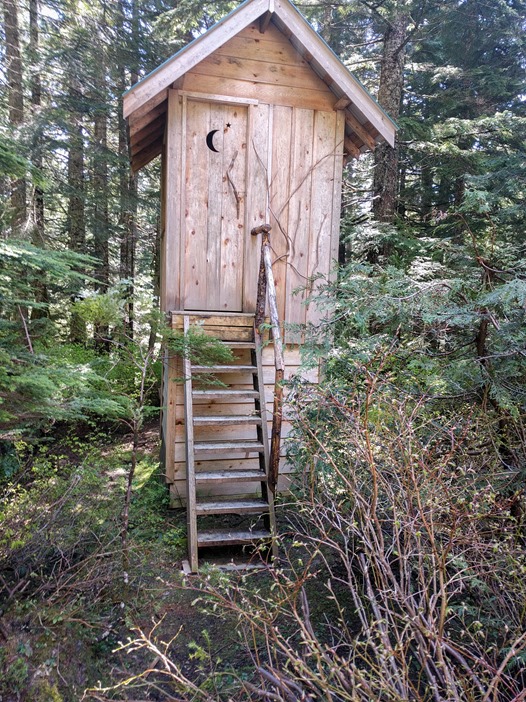 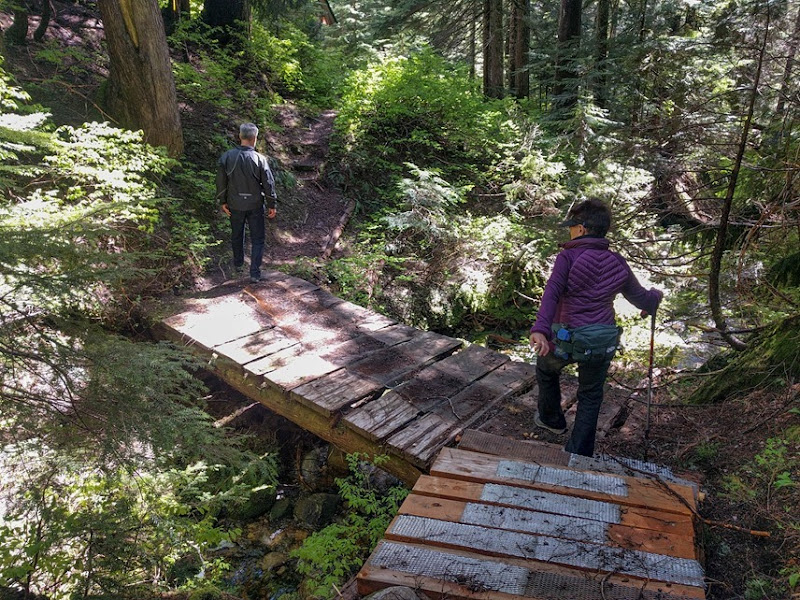 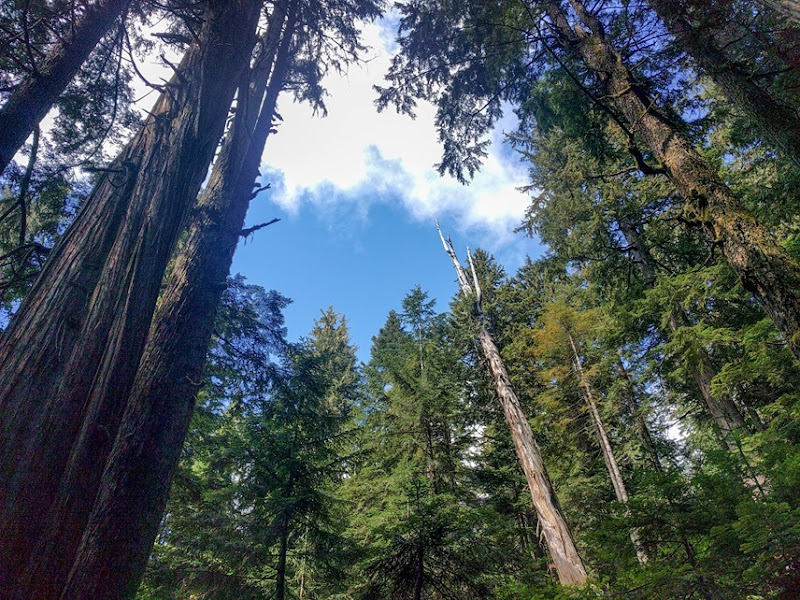 A photosphere in the trees.

My cousin is in the business of developing cocoa plantations in Central America. He (and almost everybody) likes chocolate but now he has taken a special interest. He is a member of a subscription service that sends him a box of 4 high end chocolate bars from around the world. As our hike reward we sampled 8 of the bars, reading the description of where and how there were grown. 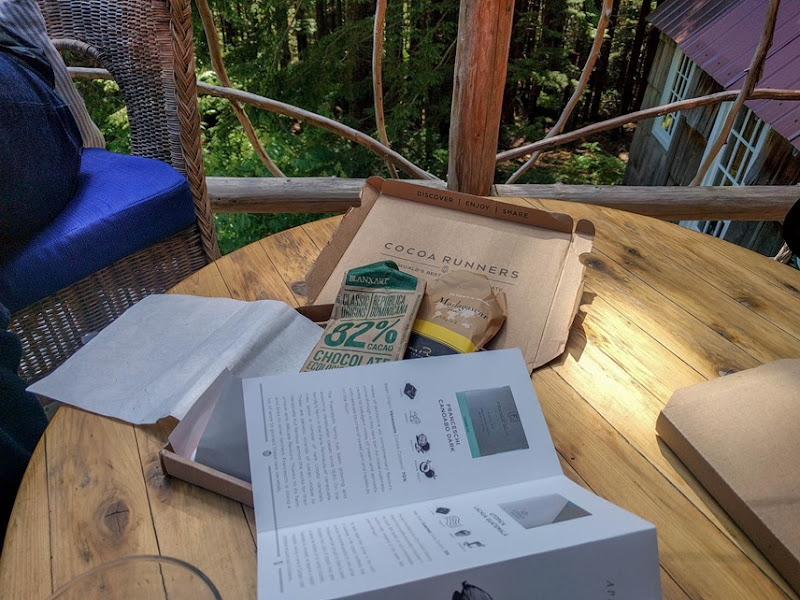 The only ingredients in most of them was around 80% cocoa, some cocoa butter and sugar yet each of them tasted very different. Of the eight there were two I really liked, one I didn’t like and the rest were just interesting because of how unlike each other they were.

I think I am going to have to subscribe because I love chocolate. He said it was around $35 a month.

Around 4 pm we headed back down the mountain. Part of the way up there is a viewpoint so we stopped to check it out. 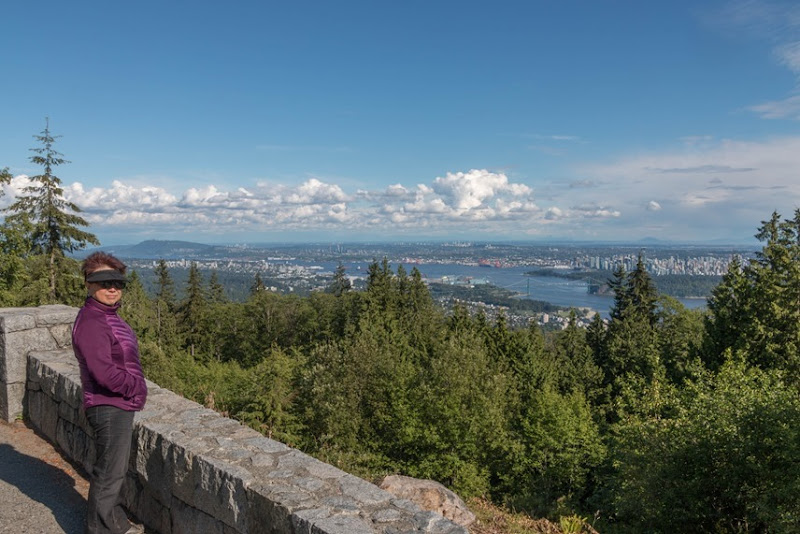 A cruise ship was heading out, I assume to Alaska, in front of Stanley Park and all the high-rises downtown. 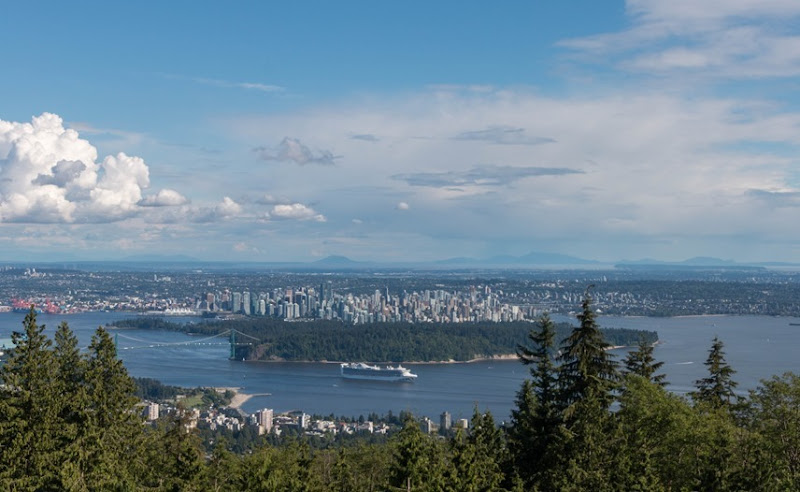 Another was ahead of it, moving past all the cargo ships waiting for dock access, with UBC in the background. 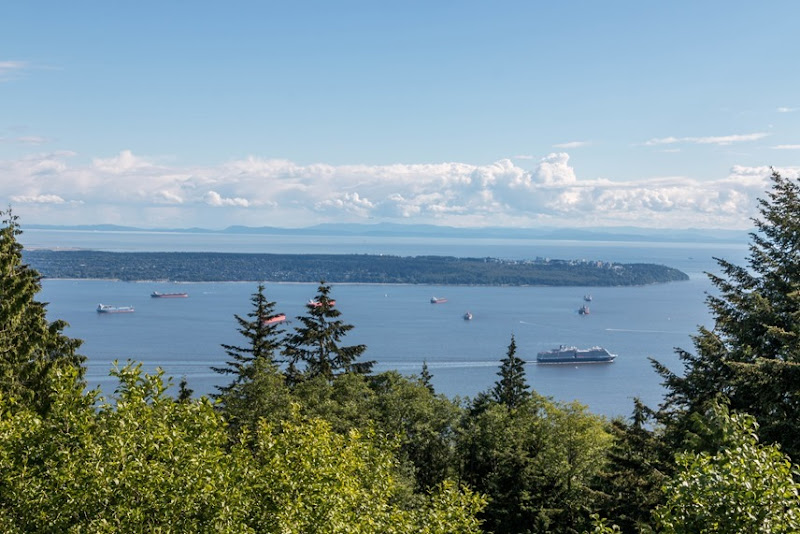 All the cars passing over the Lions Gate Bridge. An electronic sign we saw on the way home said there was a 60 minutes wait to get over the bridge from this side to downtown. 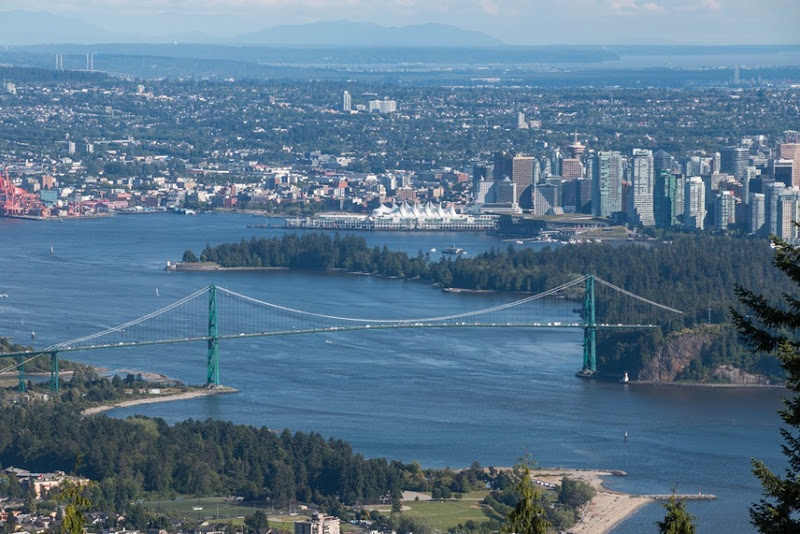 Off in the distance you can see all the pockets of high-rises for some of the other cities that make up the greater Vancouver area. 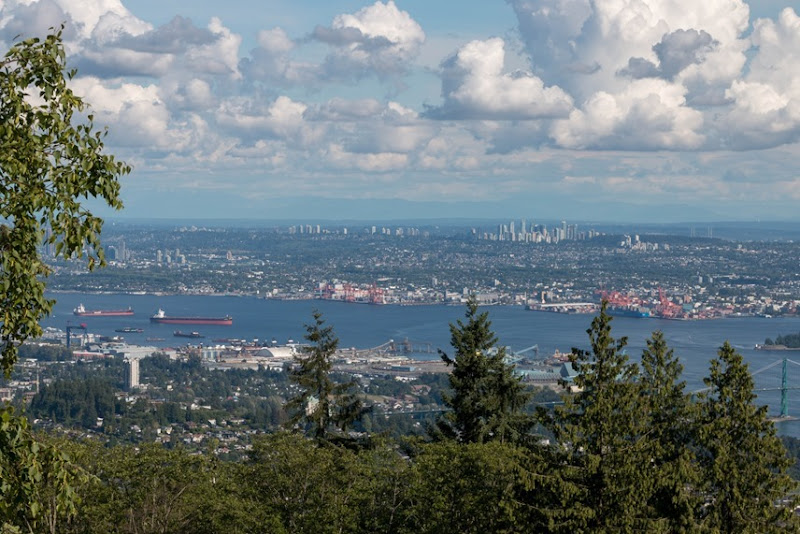 And Burnaby Mountain off in the east, where we got the views on Thursday. 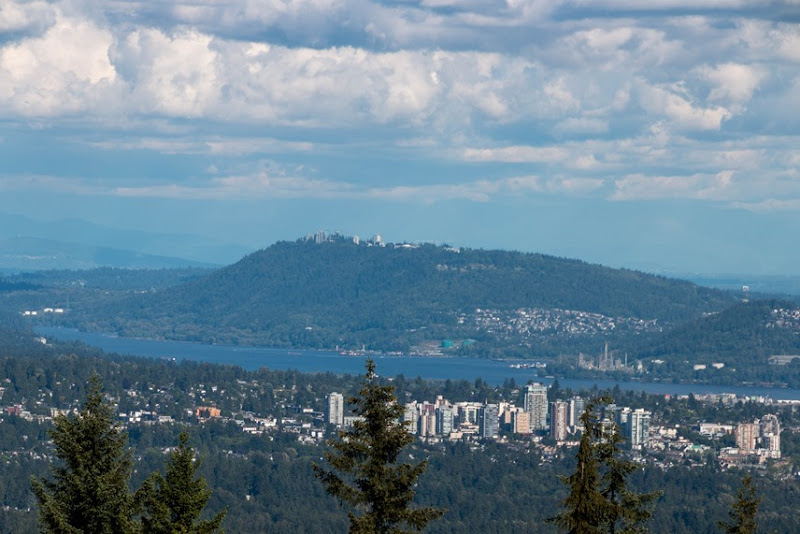