July 16 – Down The Hill to Bella Coola, British Columbia

We haven’t actually made it to Bella Coola yet. We at staying at the Rip Rap Campground in Hagensborg, about 16 km from Bella Coola. We were going to go into Bella Coola after we setup but with the draining drive and the oppressive heat (mid 30’s) here, we wimped out. 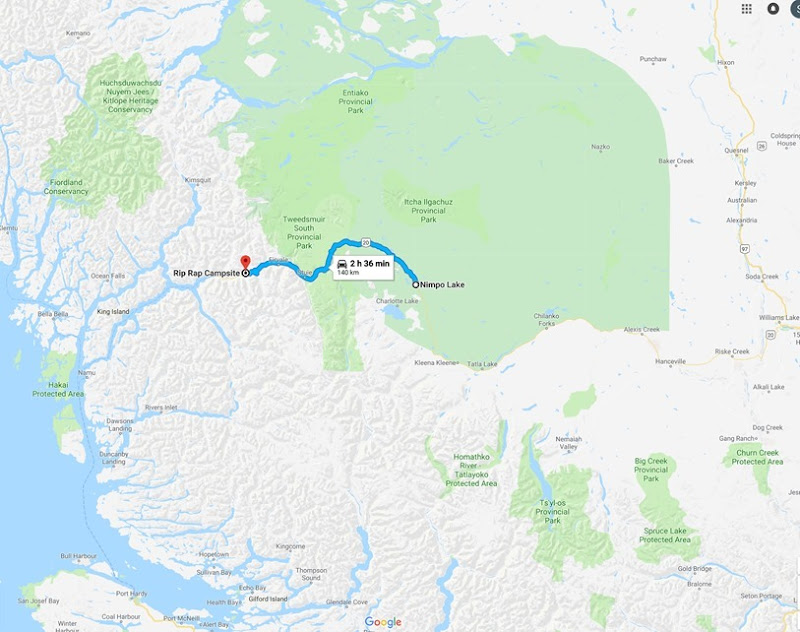 About 20 km from Nimpo Lake the road turns to hard packed dirt. The road is is very wide and smooth so it was no problem for the RV. The road also has very few cars on it although at one point we met about 6 of the large trailer dump trucks. That would not have been fun on the hill. 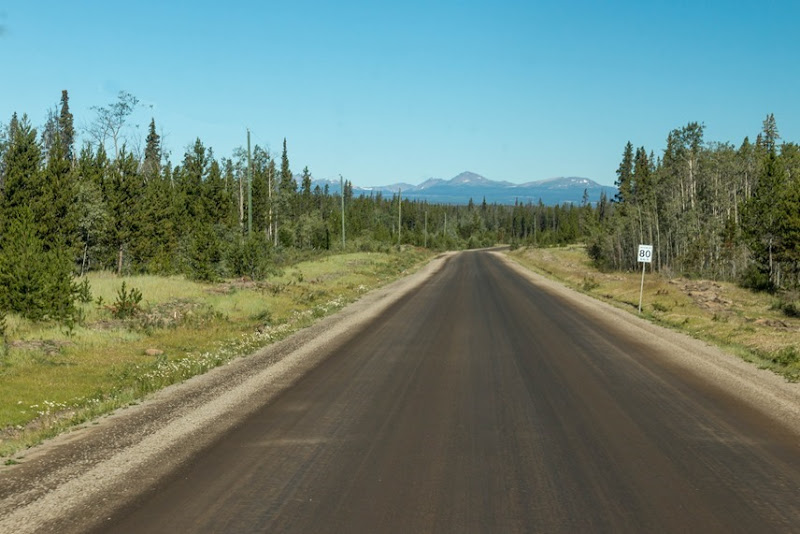 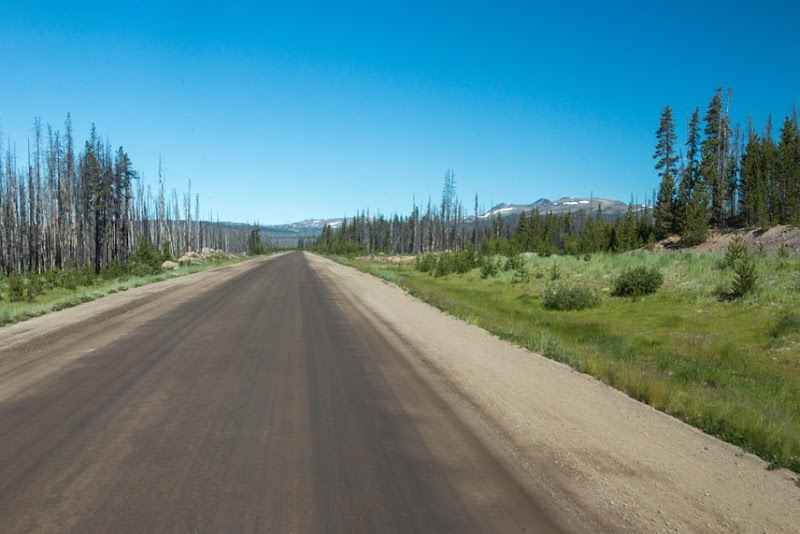 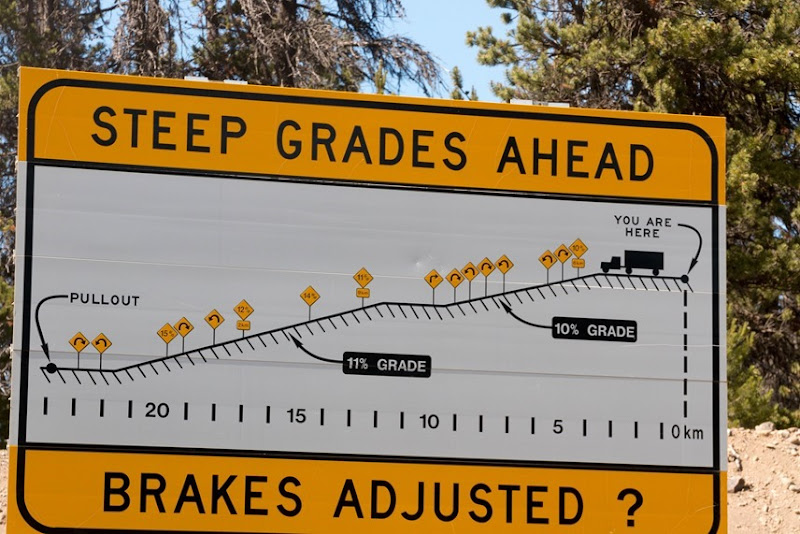 Mostly 10 or 11% grade and throw in some 12, 14 and 15% grades with a few hairpin turns for good measure. We are working are way down the side of a deep valley. It was not all turns. There were lots of straight stretches for you to build up speed. They are working on the road as well. We got stopped near the top for a single lane section. A sign said to expect up to an hour delay but today they were only grading so we waited about 10 minutes. 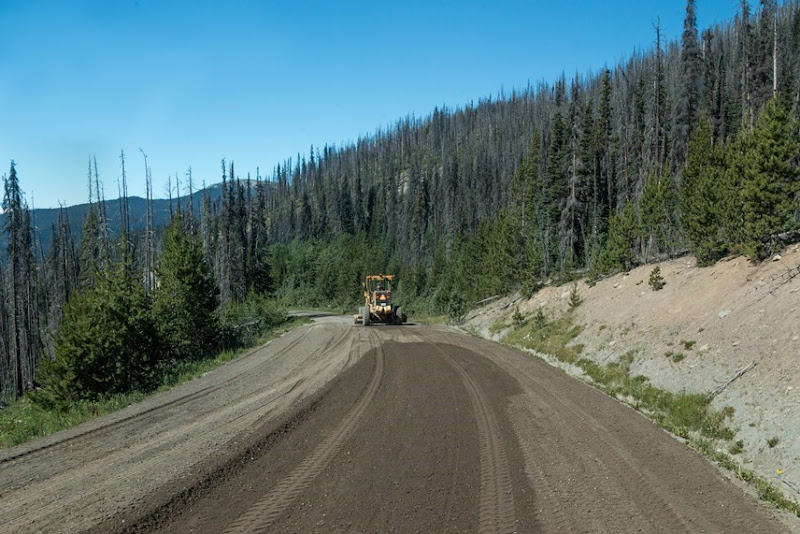 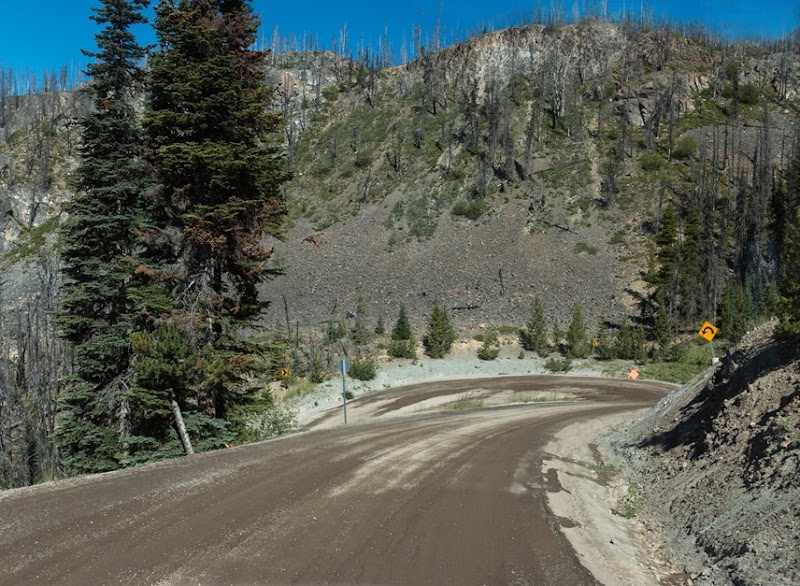 For the most part the road was very wide so there was no problem meeting someone. 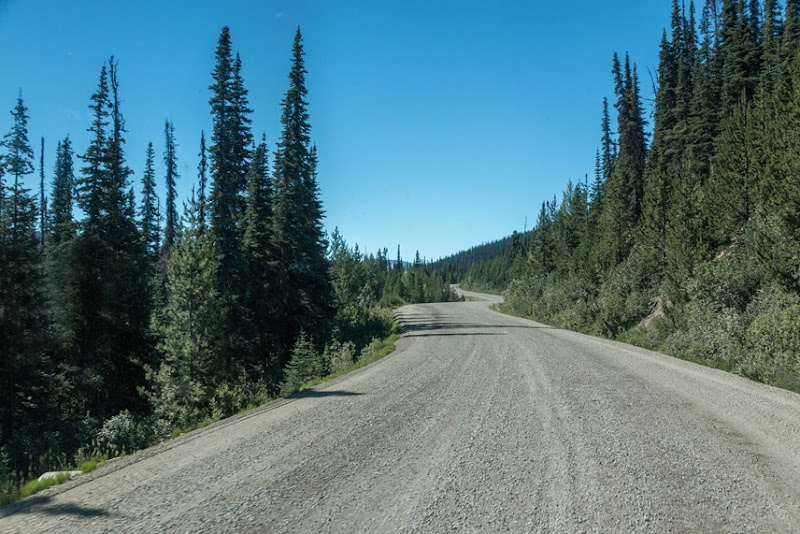 The pictures never show the steepness. 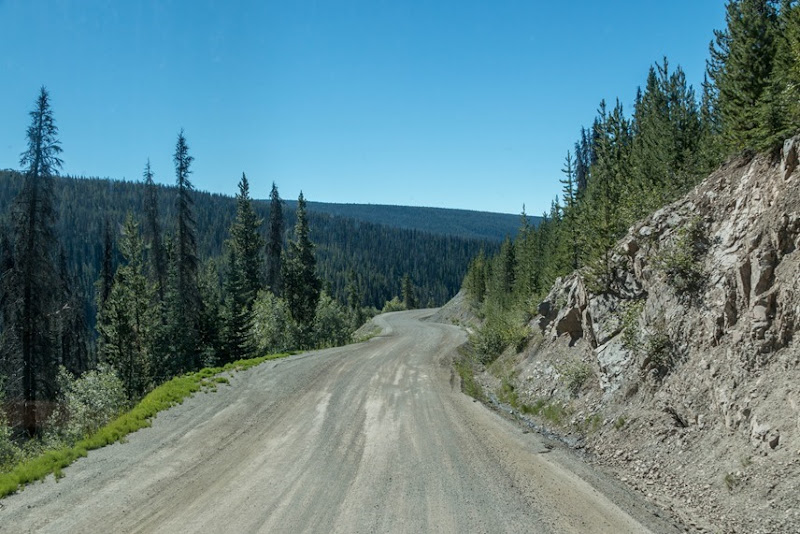 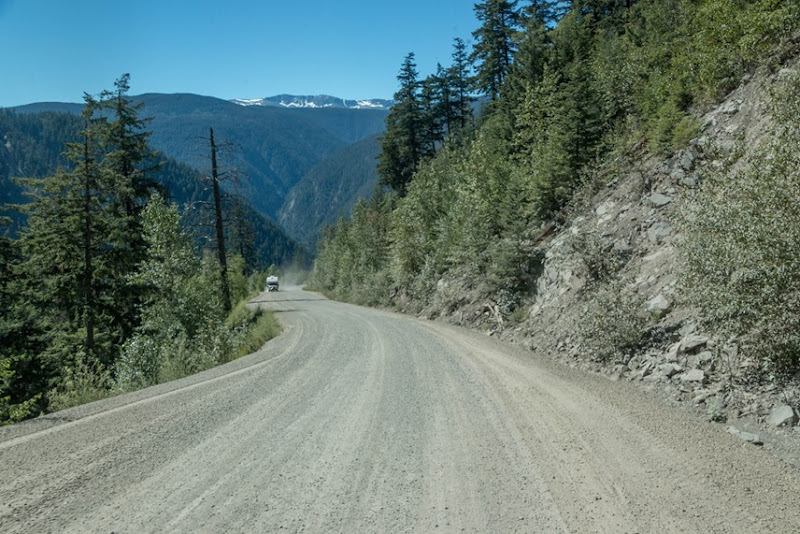 There were a few narrow spots that could have been a problem if we met a big truck, since we can’t back up with the car on. 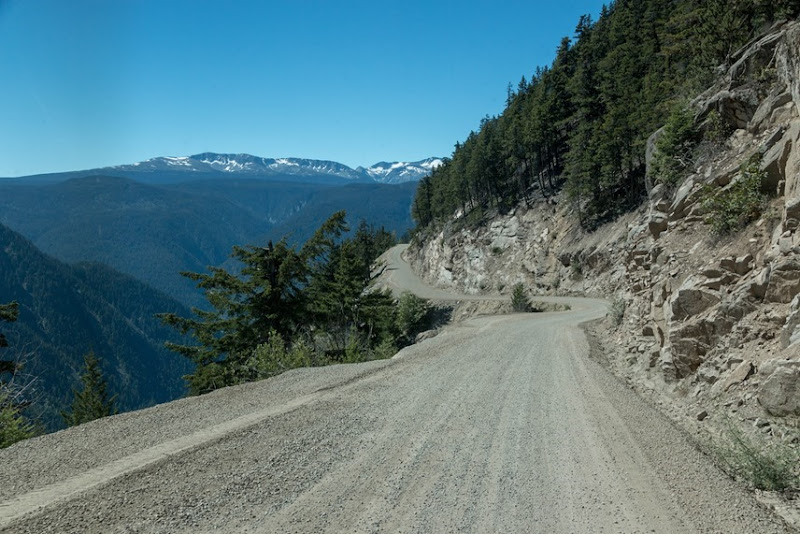 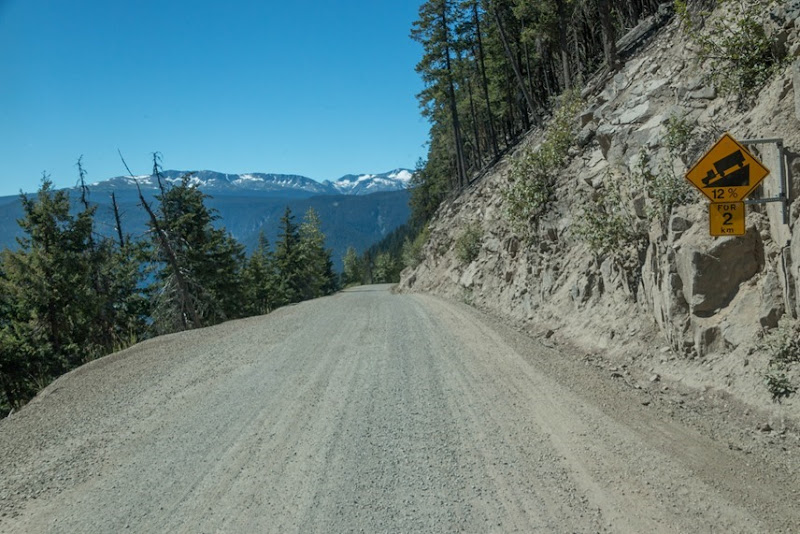 In the upper section we didn’t feel as much on the edge of a cliff as we did in the bottom section with the large zigzags we had seen from the airplane on Saturday. 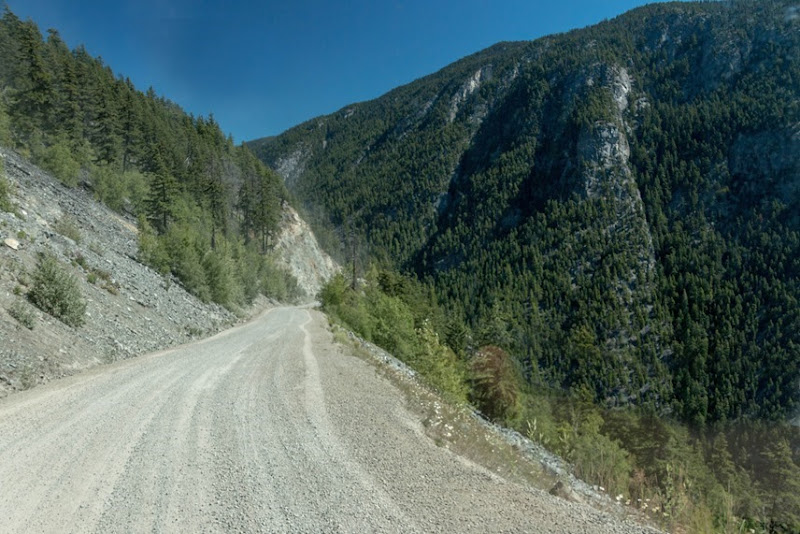 On most normal hills I can just gear down the RV and with the occasional tap of the brakes I am able to control my speed. Not here. Low gear was just not low enough so most of the way down and especially on the 14 and 15% sections I was either on the brakes all the time or at least every few seconds.

Part way down the zig zags my tire pressure monitoring system beeped that the tire temperature was too high, indicating the the brake temperature must be really high. I pulled over at the next wide section. My infra red temperature gun said that the brake discs with in the 400-500F range. I hadn’t noticed any fading of the brakes but we decided to give them a good long rest and had lunch. By the time we left they were back down to around 180F.

I have been worried about the brakes this trip. These are still the original brake pads, after about 90,000 km. Since we mostly drive the RV on the highway and I use gearing down to help with the braking a lot I expect them to last but this is a really long time..

At the end of last year I did get a mechanic to check how worn they were and he said that they were good for at least another year. I really should have told him where we were going this year though.

Here is our lunch spot from our aerial picture. 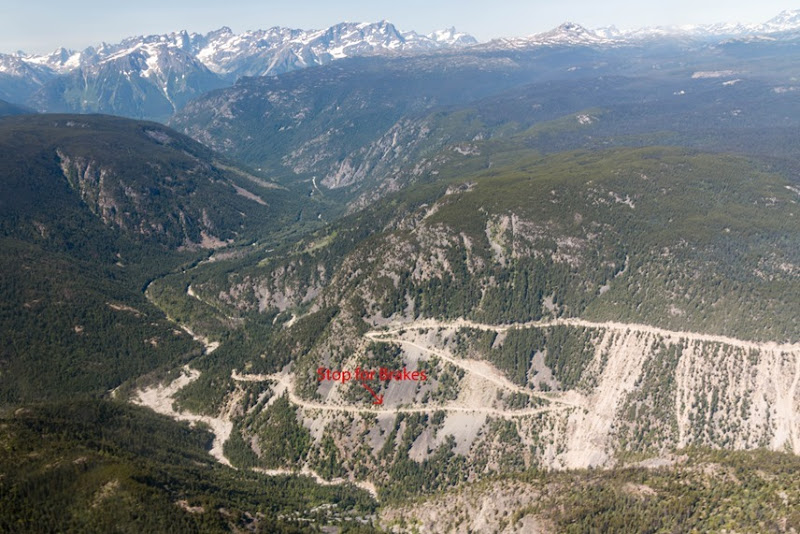 And on the ground looking downhill. 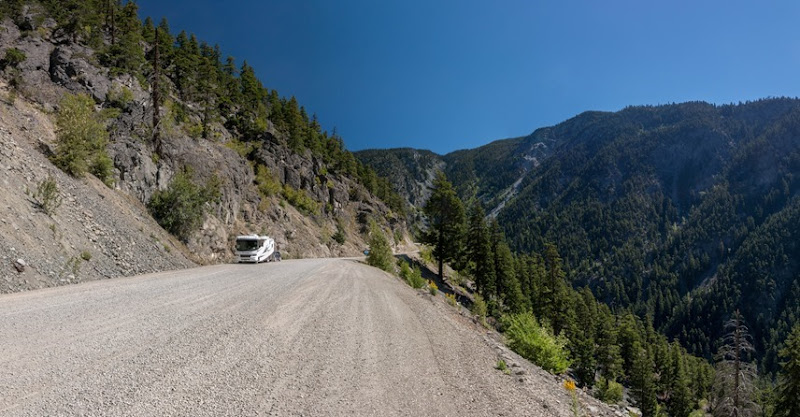 And for good measure, a photosphere.

The CRV, the back of the RV and our bike are covered in dust. 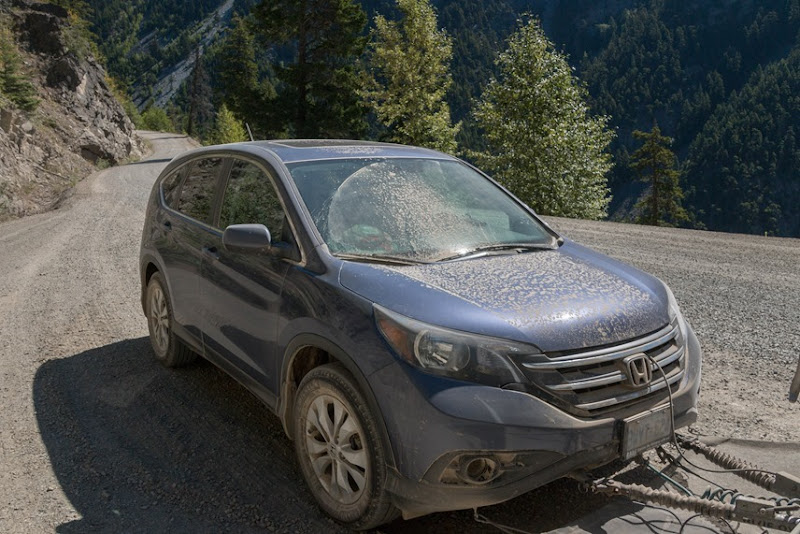 Eventually we continued and made it down to the valley below. On the entire trip down we were passed by a pickup near the top. We only met about 5 cars coming up and one large truck that came up while we were parked. 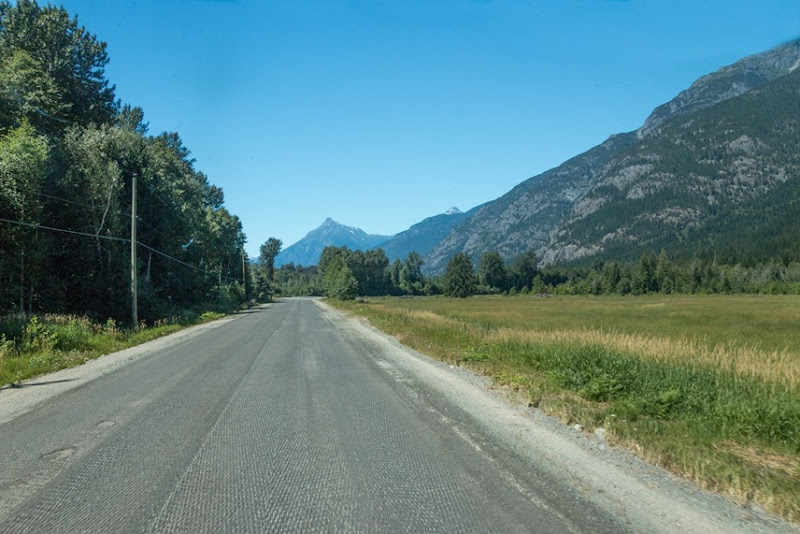 They are repaving the road here so it had been ripped up. These sections were actually smoother that the parts they hadn’t touched.

And into the Rip Rap Campground, surrounded by mountains on all sides. The wide angle lens always makes things look smaller. They are very impressively large in person. 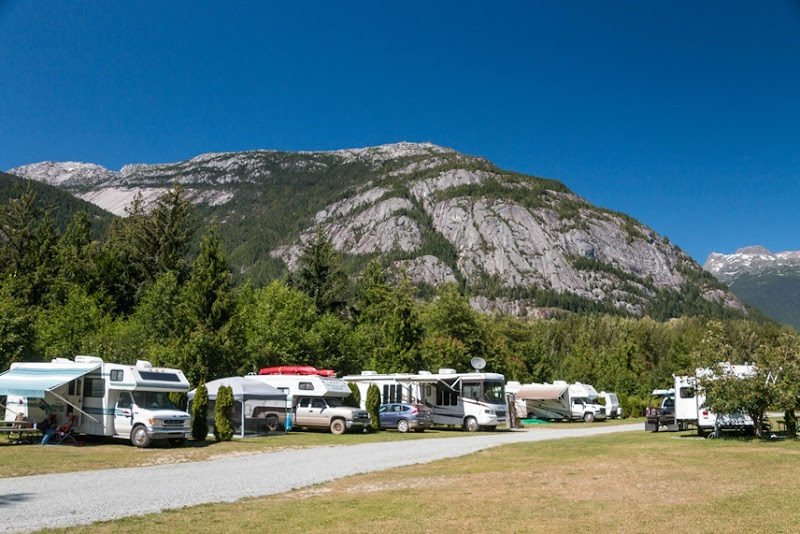 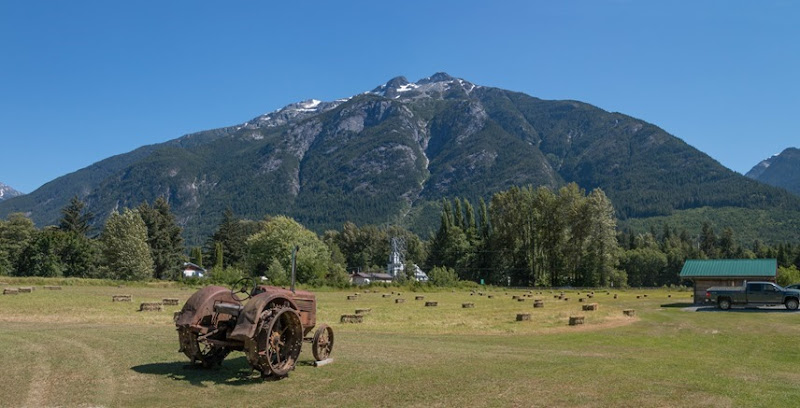 A photosphere does a better job.

At the edge of the campground, they have a nice viewing platform by the Bella Coola River. 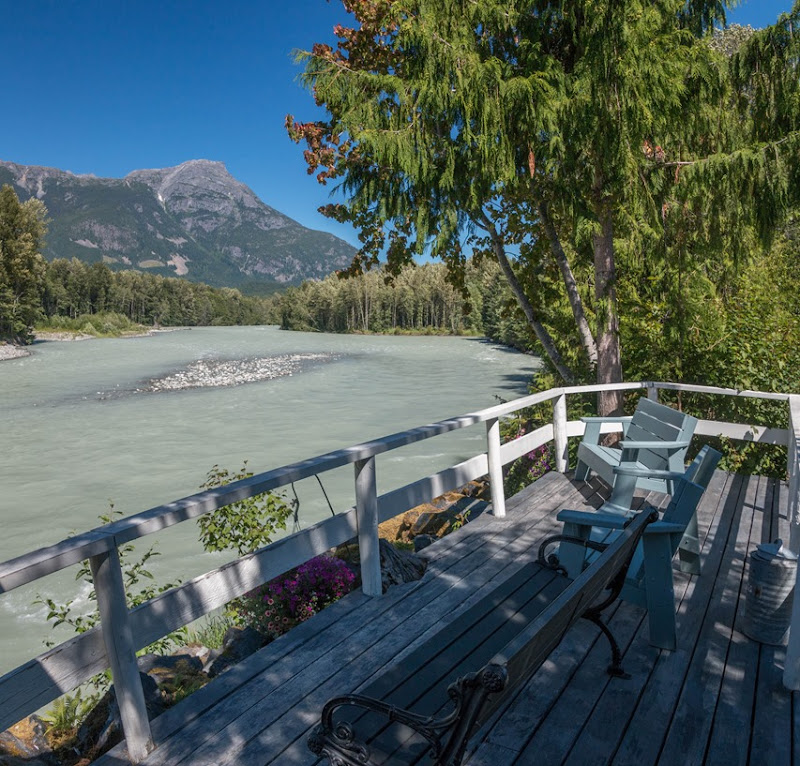 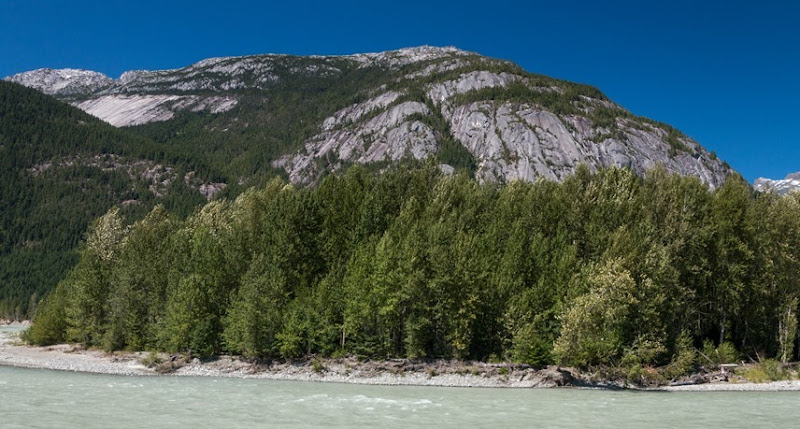 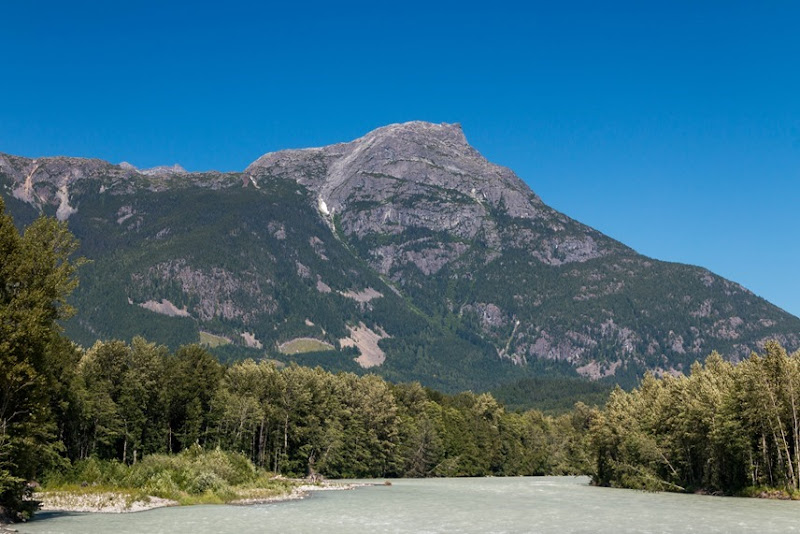 We only have 20 amp power here, which means we can only run one heavy use thing at a time so we will have to be careful. I am sure we will end up popping the breaker a lot. At least it is better than an normal outlet’s 15 amp power. With 20 amp we can at least run one air conditioner in this hot climate.

When we were checking in, we heard a helicopter heading up a side valley. The owner mentioned that it had been making many trips so maybe there was a forest fire that it was dumping water on. Jennie just happened to get a picture of it. 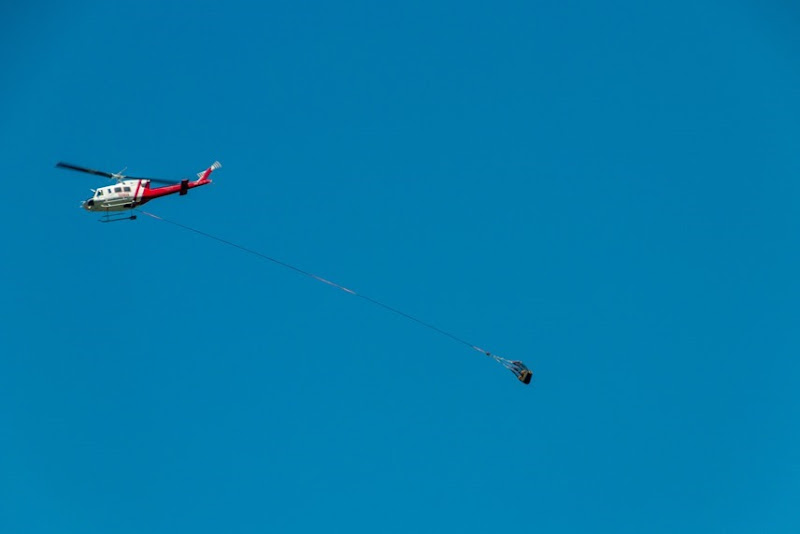 A closeup of its payload reveals that it is just carrying supplies to a remote location.  No forest fires wanted around here or anywhere. 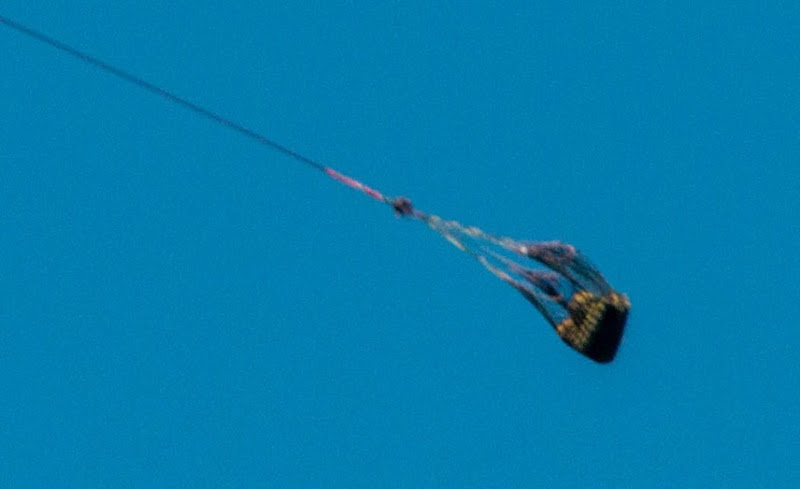