Today we drove up and did a few things in the northern section of the park.

On the way, our first side trip was the 4 km dirt road to the top of Green Mountain and its lookout tower. 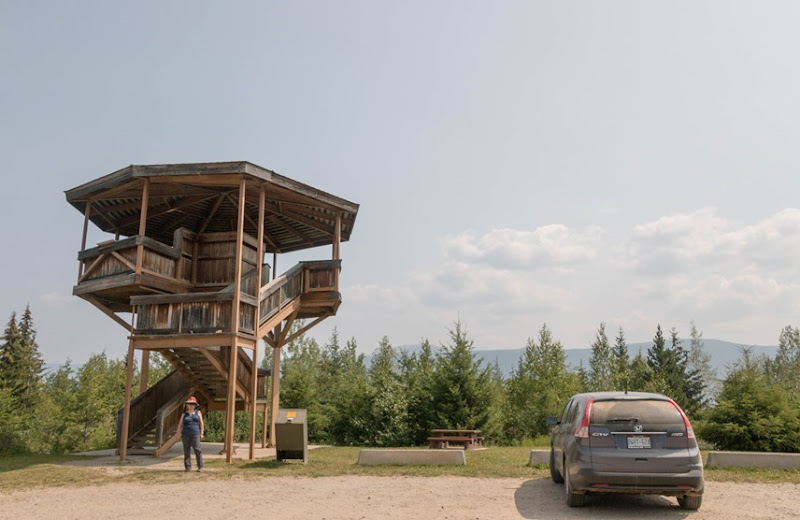 The view was a bit of a dud, as I think it was even hazier than yesterday. This is looking south towards some of the peaks of Trophy Mountain. 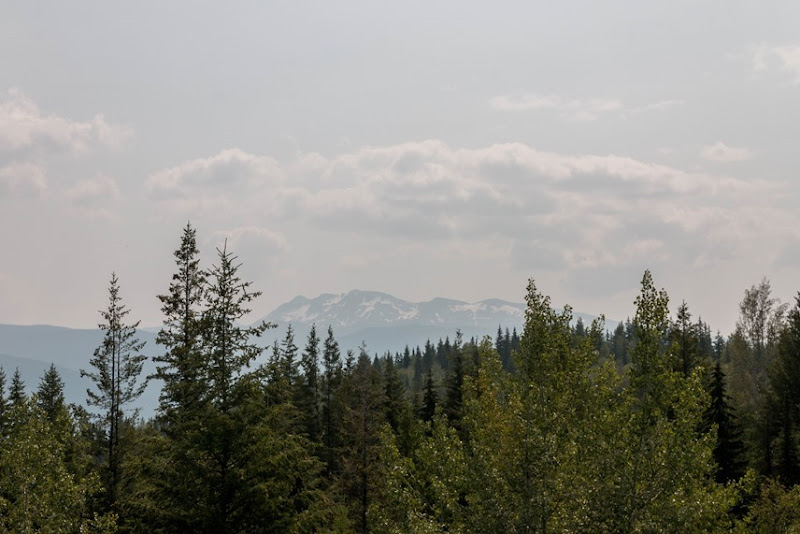 And the northern view. You can see the conical Pyramid Mountain  I had thought about doing a hike to the top but since the view would be much like this, we will skip that one. 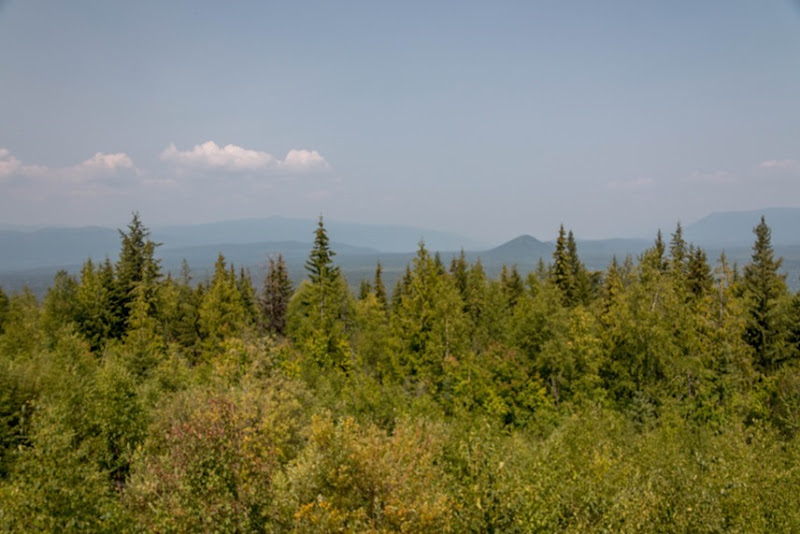 Next up was a waterfall just below a bridge on the park road. I am not sure why it is called the Mushbowl.

This is looking under the bridge away from the falls. There was no way to get the view from the other side. 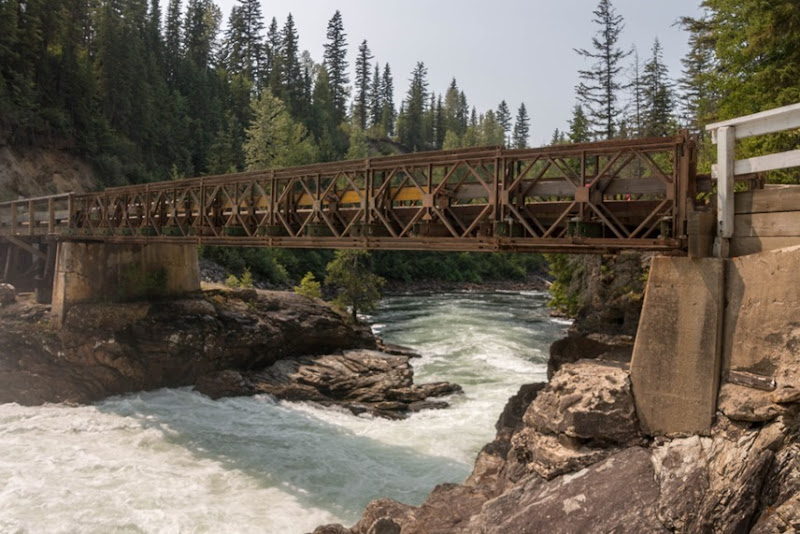 The bridge is a single lane with almost blind corners on each side. The road is not that busy but I imagine there have been quiet a few panic stops.

I climbed down to get a closeup side view. 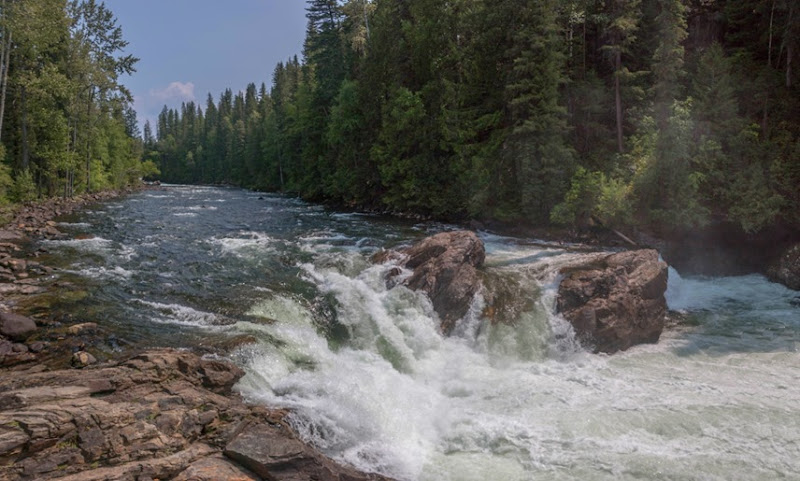 Then, after checking both way, I went out on the bridge for the better front view. 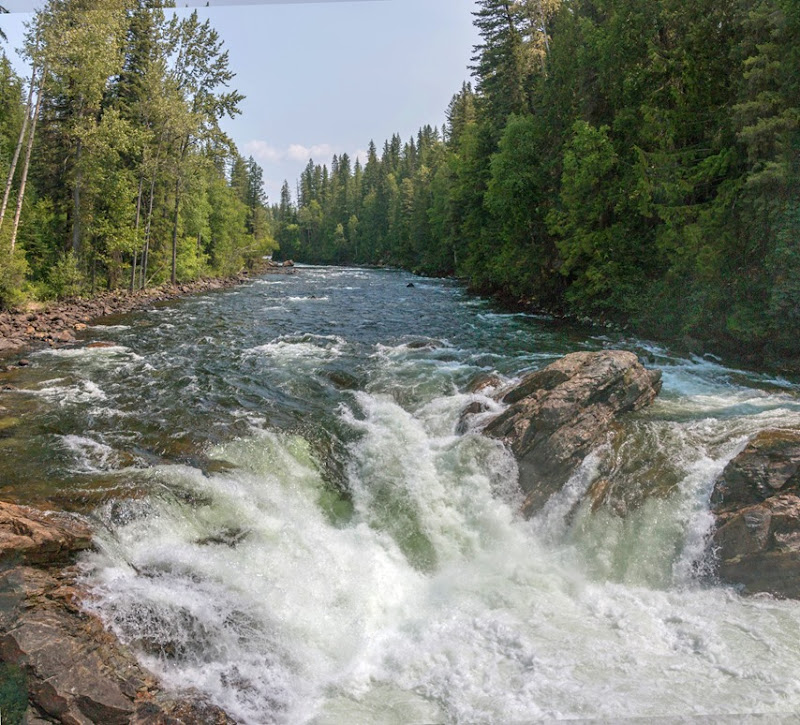 From the campground it is about 30 km north, most of it on a good dirt road, to the bottom of Clearwater Lake that feeds the Clearwater River.

The lake was formed when a lava flowed blocked the river. Now what is called Osprey Falls, is what happens when the water from the lake falls about 5 feet off of the lava shelf into the river. We parked in the park campground and walked to a viewpoint right at one end of the very wide falls.

This is the view down on the end of the falls. They are interrupted by an island and then continue off in the distance. 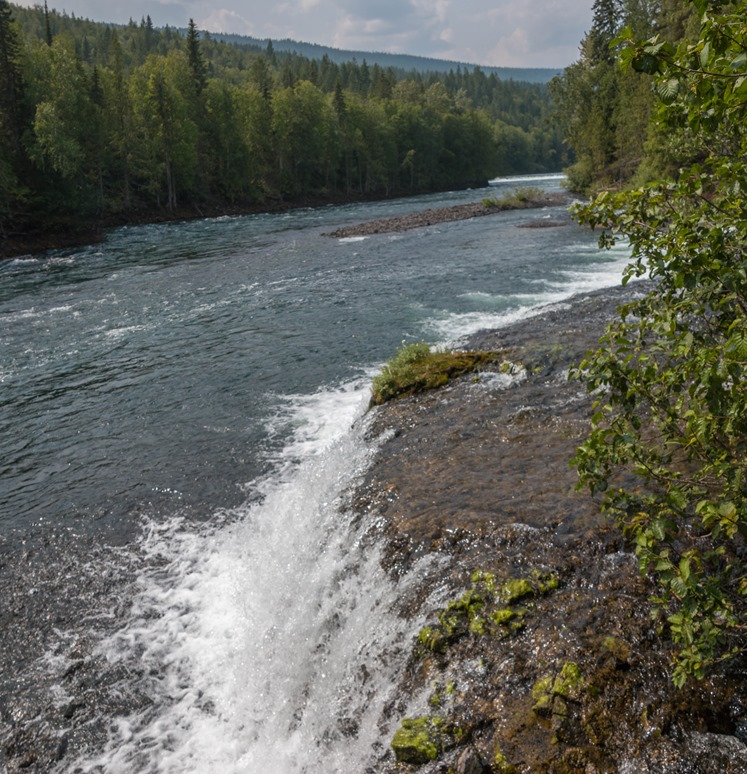 Since that wasn’t a very good view, we climbed down the lava shelf for more of a side view. 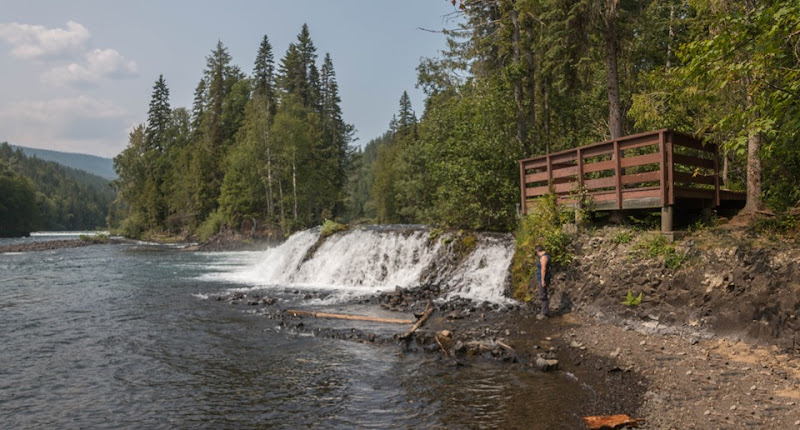 We went to another viewpoint a bit farther downstream. We first had to cross over Falls Creek. We couldn’t really see the falls at the end of Falls Creek as it too went over the ledge. 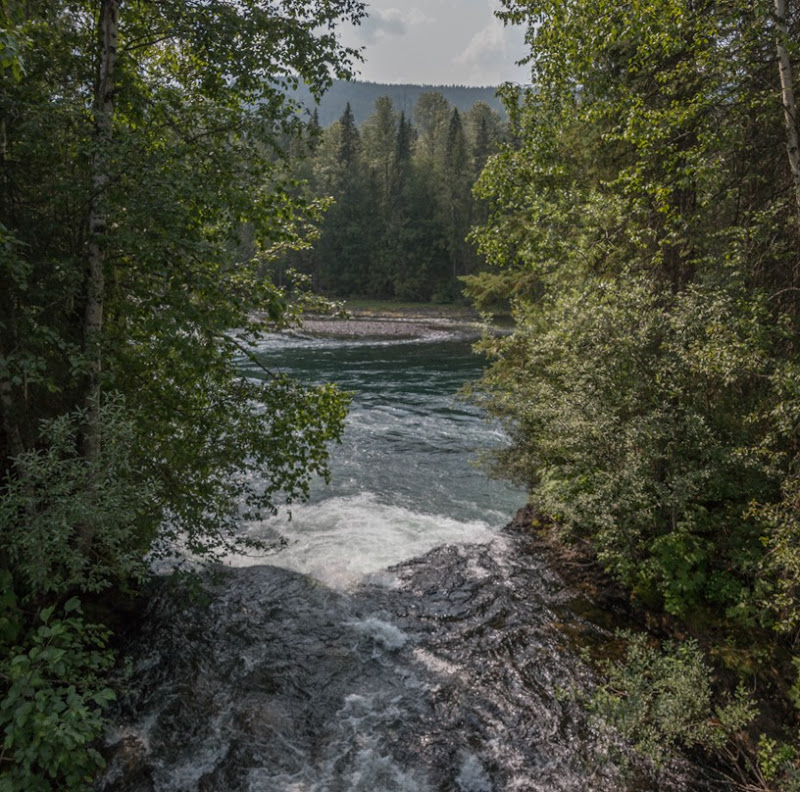 And the view back up towards the first viewpoint, with the lava cliff. 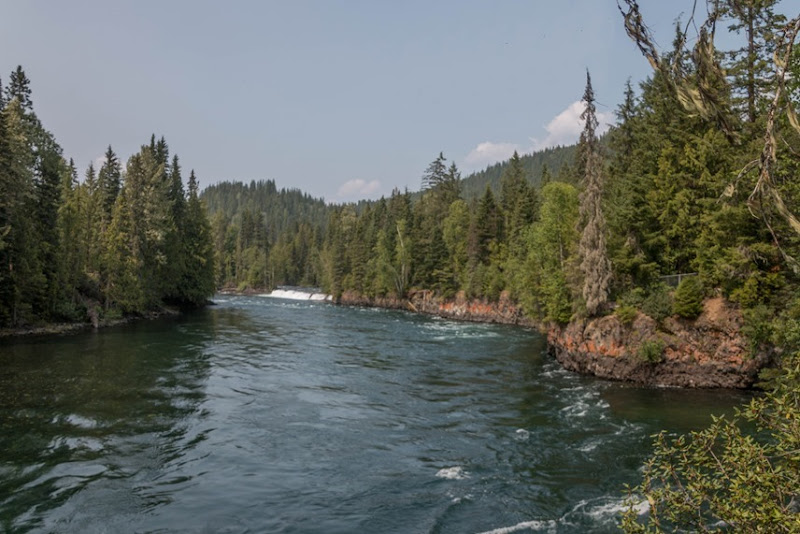 We did a short hike that zig zagged up a hill, to the east of the lake, to Stitca Falls on Falls Creek.

On the way we passed a beautiful patch of red mushrooms. 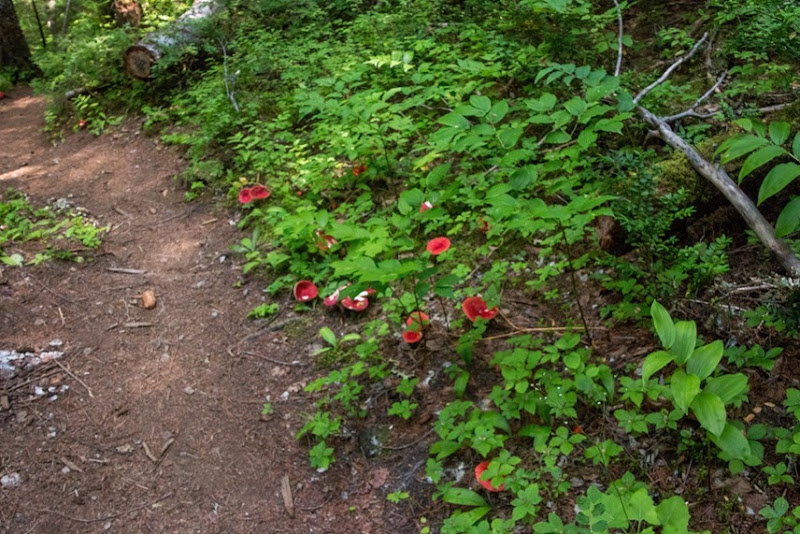 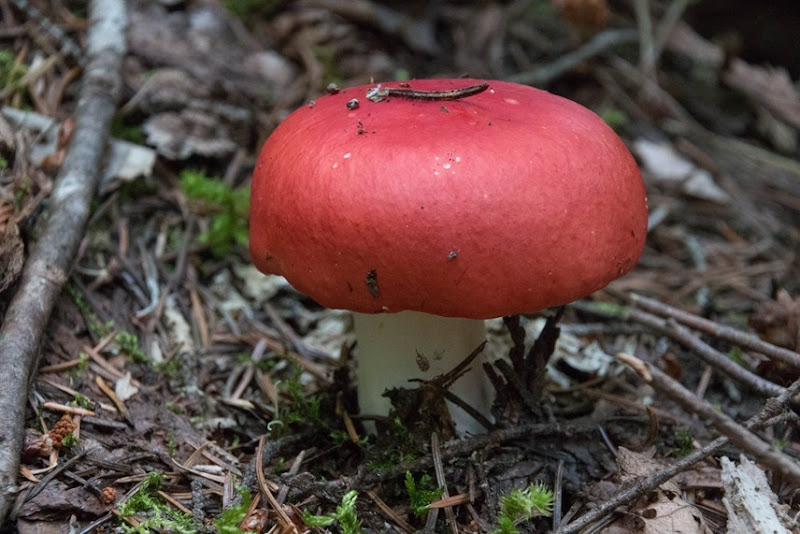 And a tiny almost perfect one. 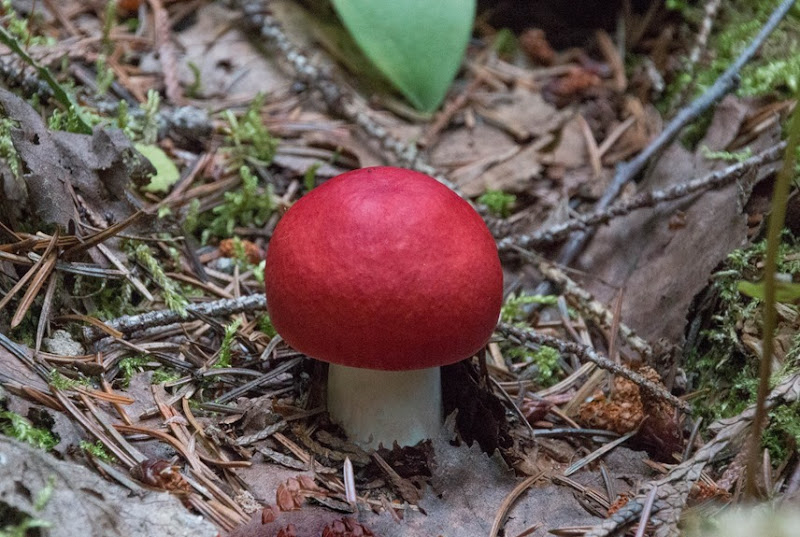 There was also this one that reminded us of a green apple, looking down from the top. 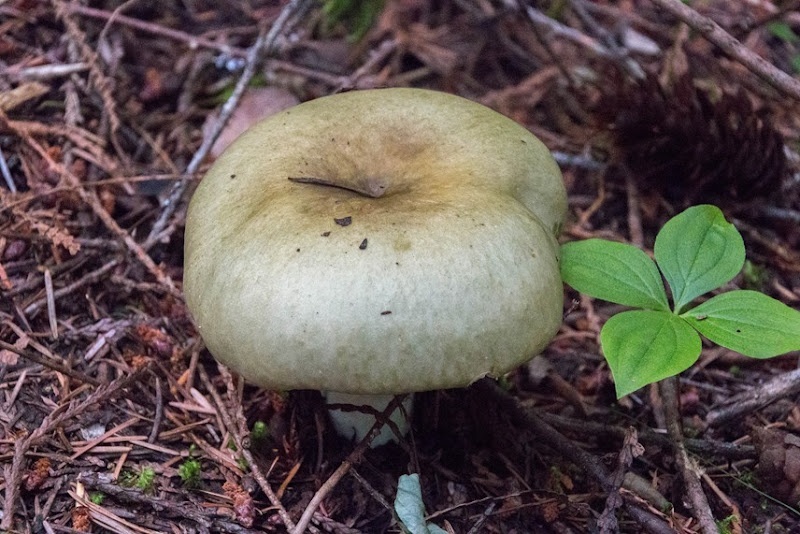 When we got to a bridge there was a sign pointing to a side trail down to the falls. At first we thought that this cascade under the bridge was the falls. 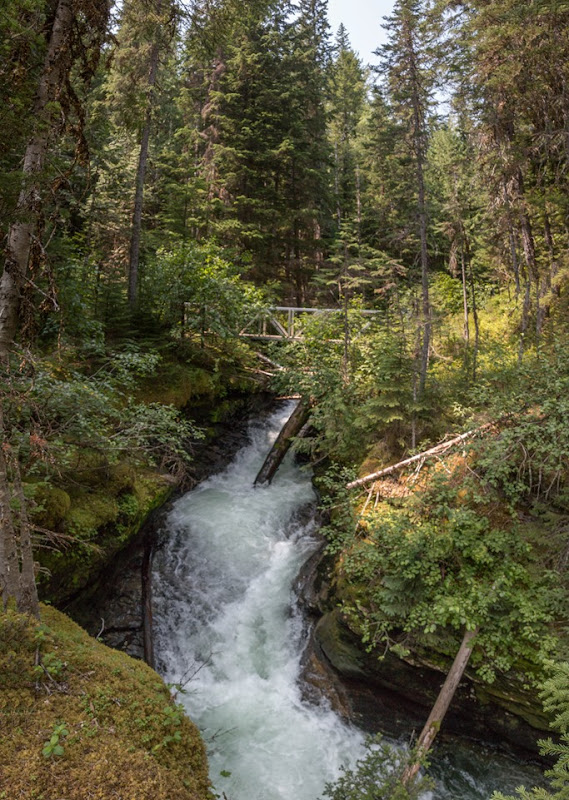 Then we saw that the trail continued steeply downhill to the real falls. One blog that I read about the falls never did show the real one. 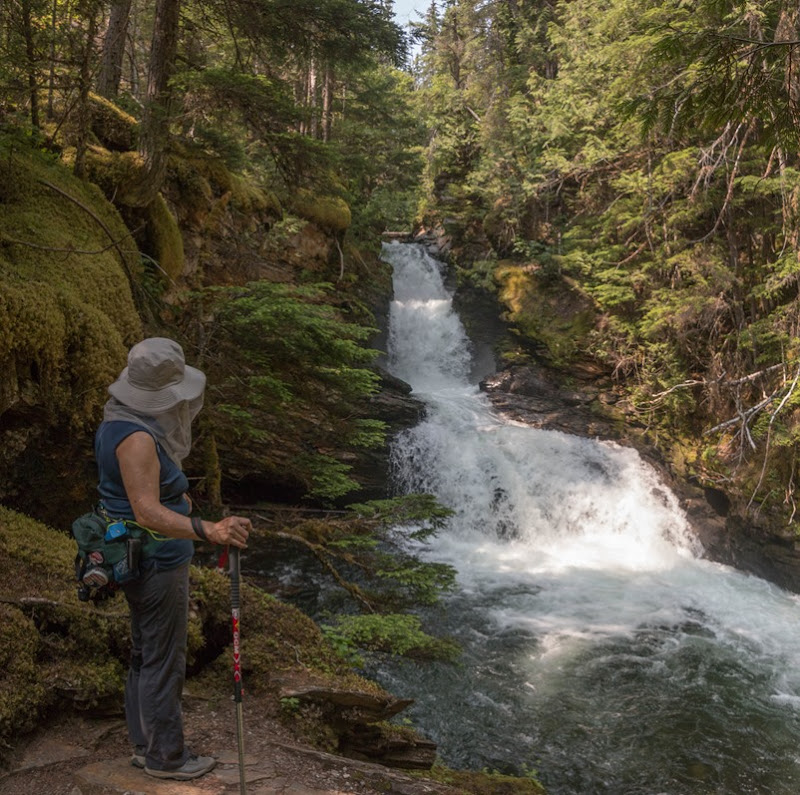 There was a very interesting basalt column undercut to the left of the falls but there was nowhere to get a good picture of it. 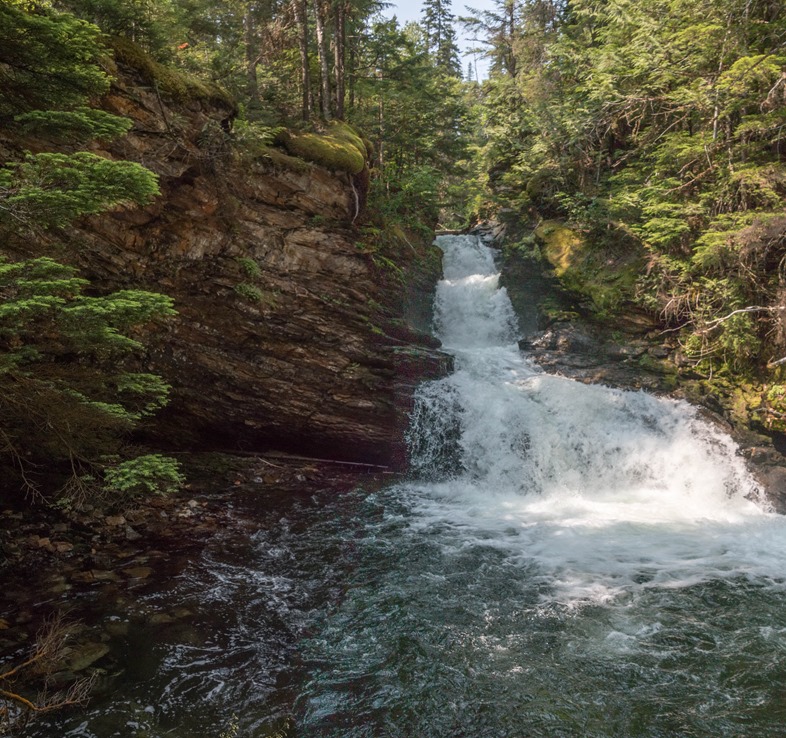 This was the best I could get, more just to remind me. 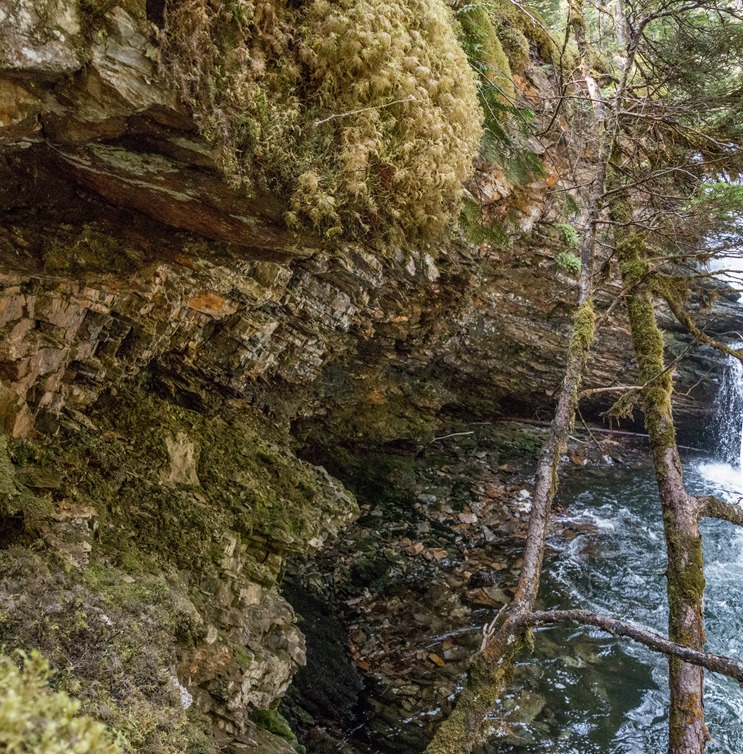 Below the falls and around a corner there was a tall cliff, with some nice layering, that the creek had cut through. 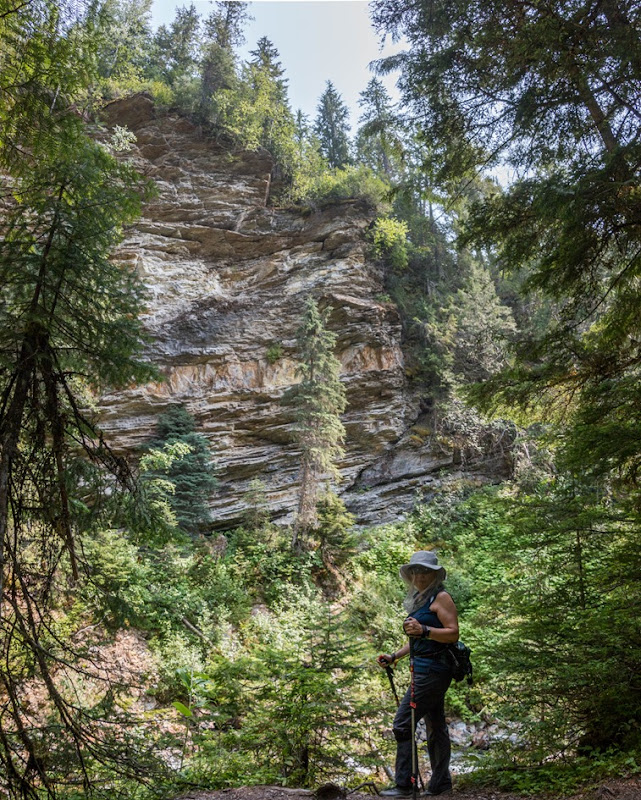 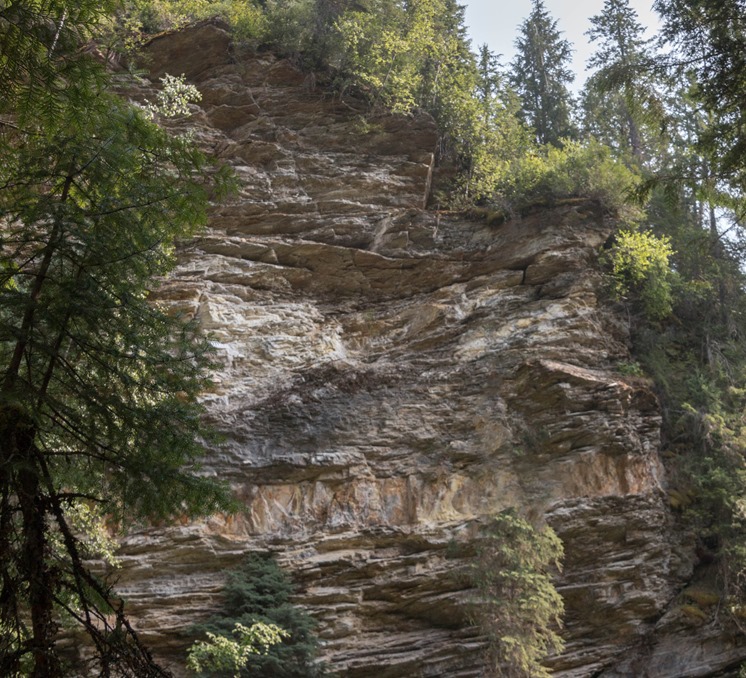 And then the climb back to the bridge. 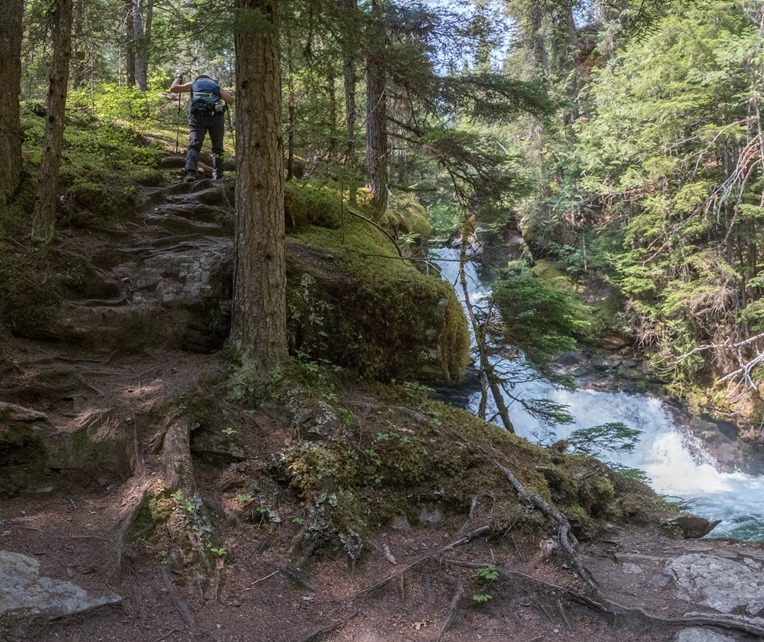 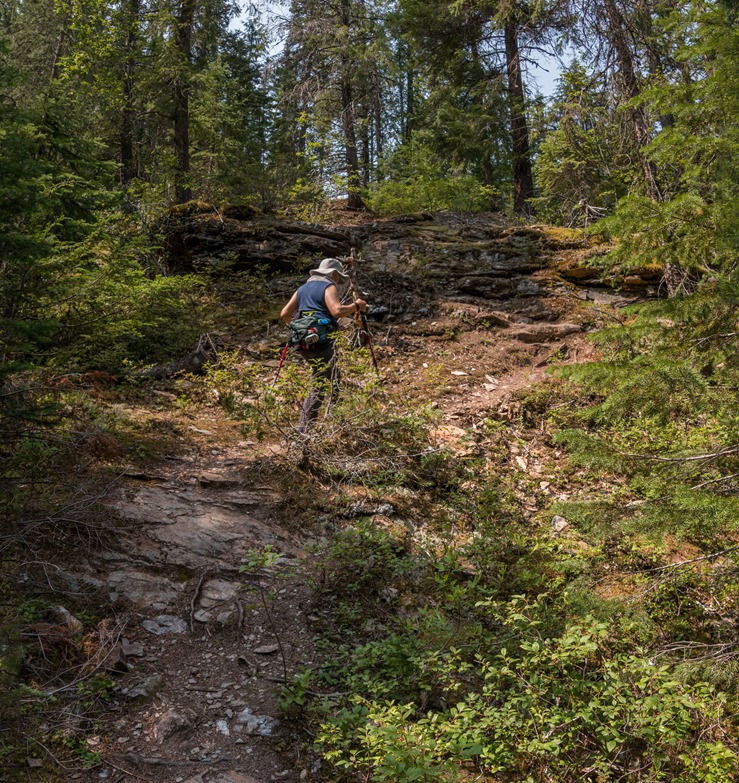 Just above the bridge is the Dragon’s Tongue. It is a lava flow that was cut off by the creek and now there is an undercut with basalt blocks having fallen down everywhere. 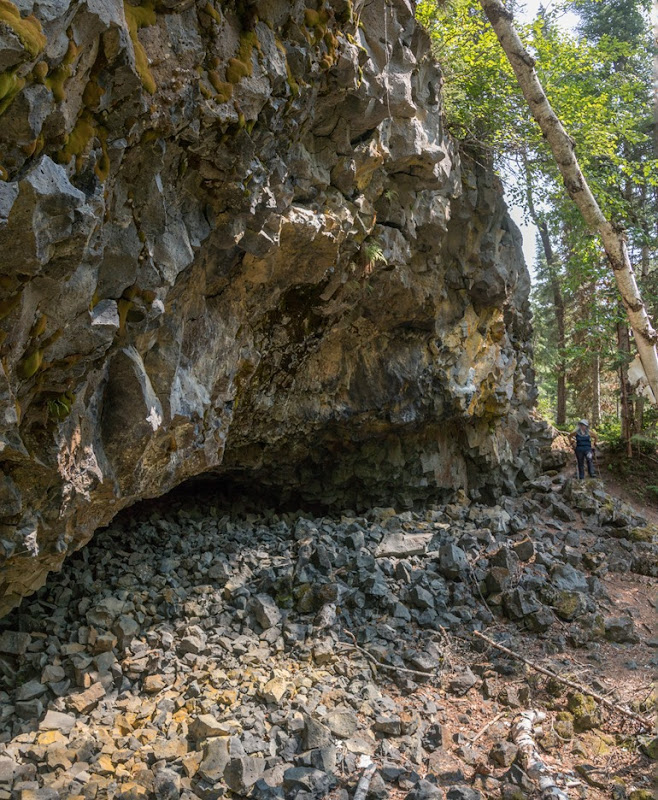 One picture is all that is really necessary. Plus a photosphere. 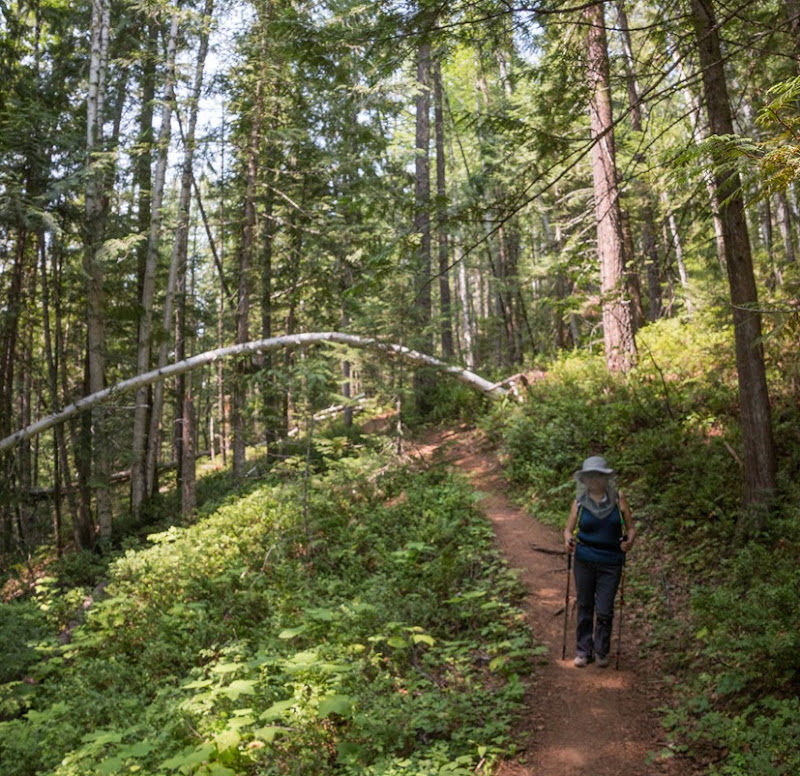 I couldn’t resist another mushroom shot. 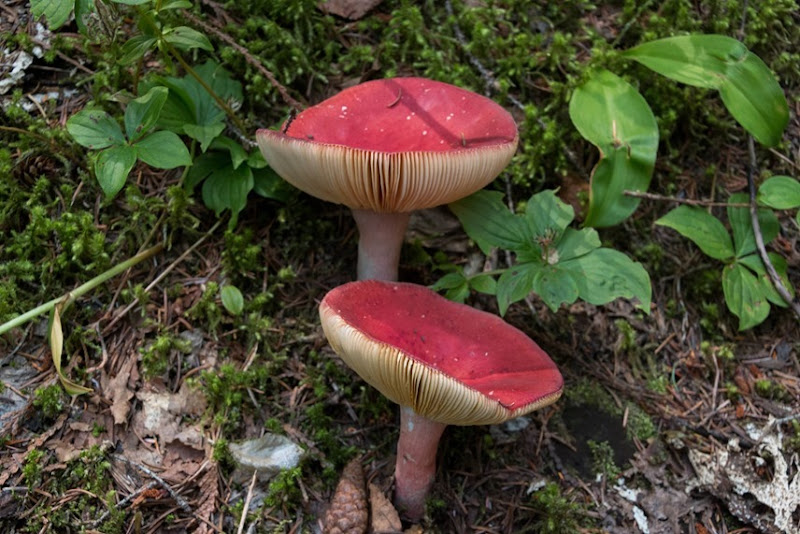 On Tuesday we had gone to see Helmcken Falls. We were there in the morning and the sun was behind them so they lighting was terrible. Today, in the late afternoon, they were partially sunlit. We may go back even later another day.

They have the next highest straight drop of water after Hunlen Falls, that we flew over the other day.

This is the best I could do on Tuesday. 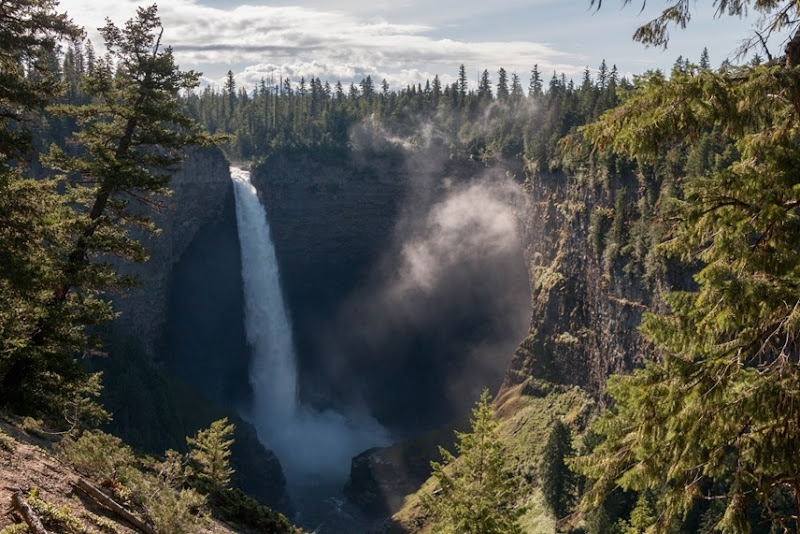 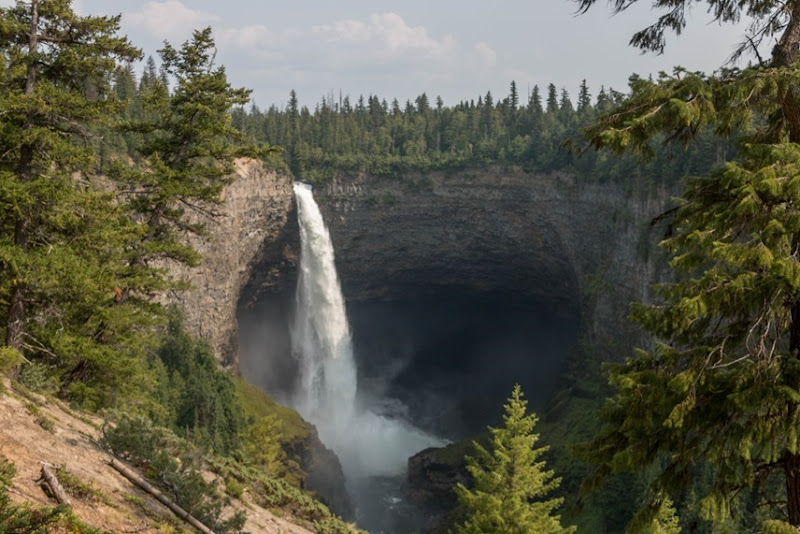 The water free falls into a huge bowl and really boils around in there. 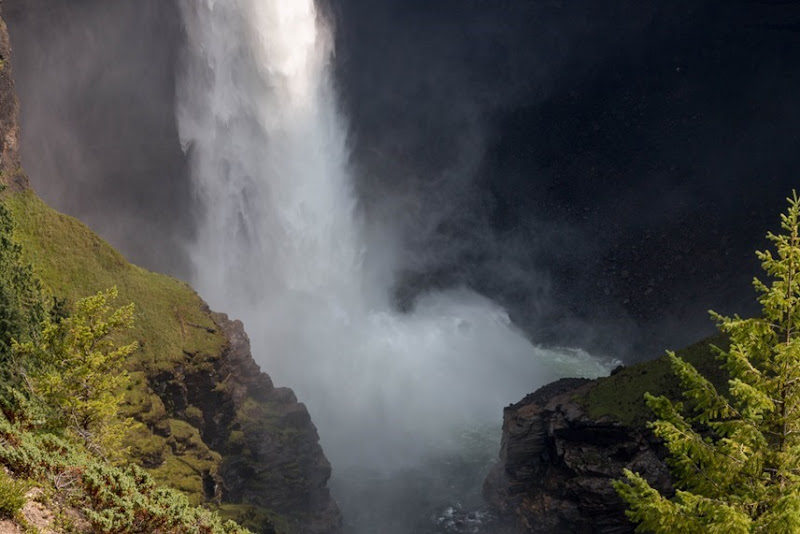 Another view from farther down the canyon. 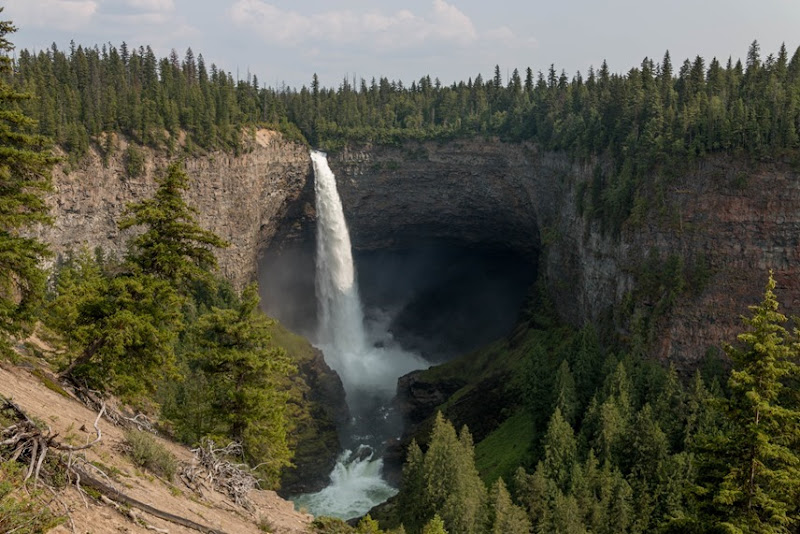