Triple Decker Falls is sort of a hidden gem. The only reason I know about it is that I happened to read someone’s blog post. It is not in the park so not in their literature. There is also no signage. You just have to know to park behind the concrete barriers at the “Woodlot 301” sign just north of Clearwater. 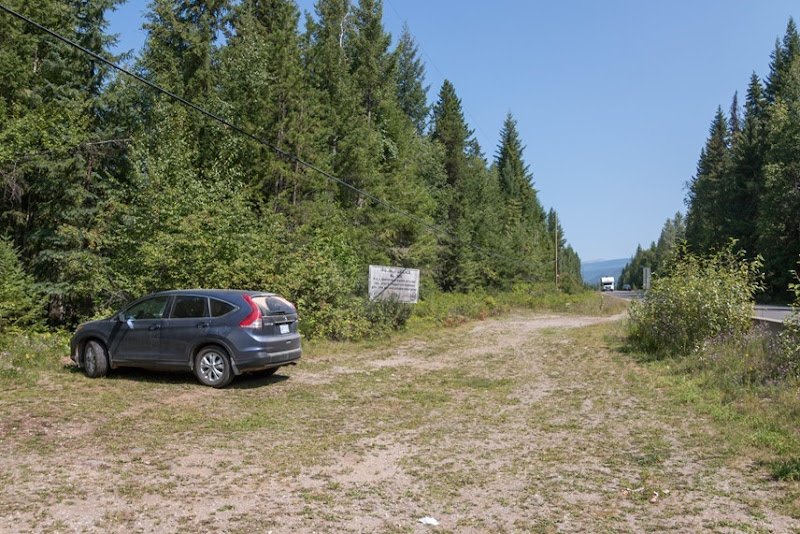 The trail is short at only about 1/2 km to get to the falls and you only drop down 70 m or 220 feet but you do it in several very steep sections.

You know its going to be bad when a local youth group leaves poles for you to use. 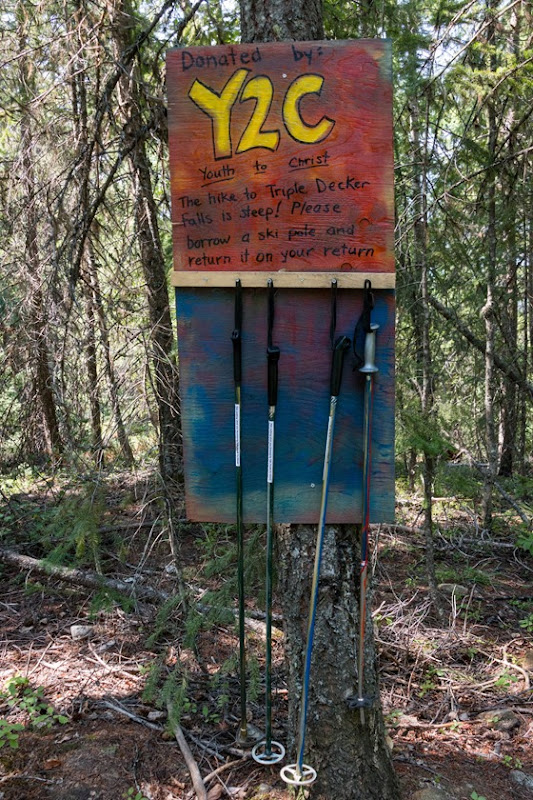 The first section is right at the start and was somewhat gravelly. Jennie discovered that she doesn’t have much tread left on her hiking shoes because she just couldn’t get a grip and slid most of the way down. This is picture going back up. 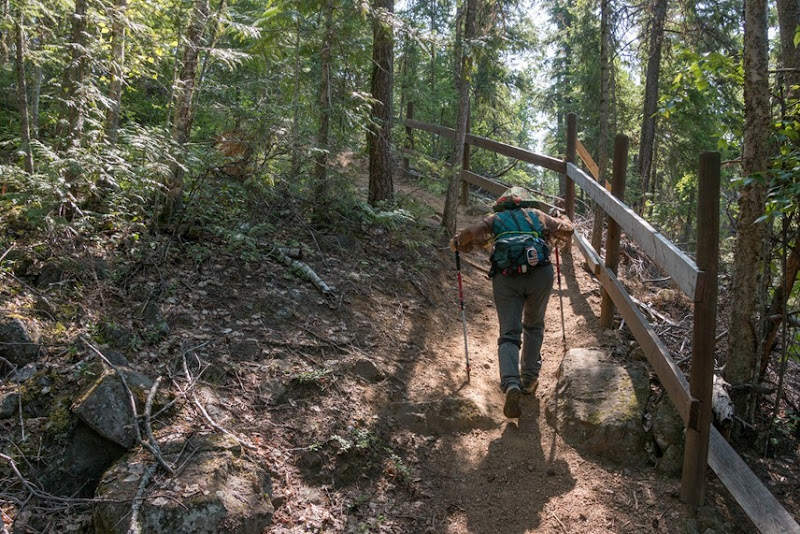 The middle section was a little more flat. 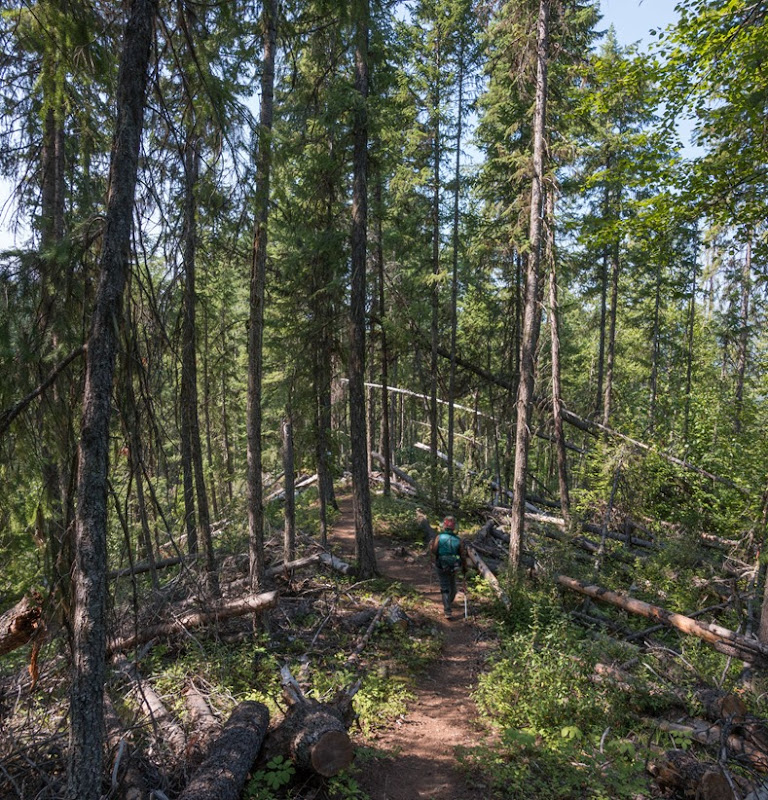 Then another very steep section without much traction and we were down to Candle Creek.

Now came some rock scrambling to get closer to the falls. 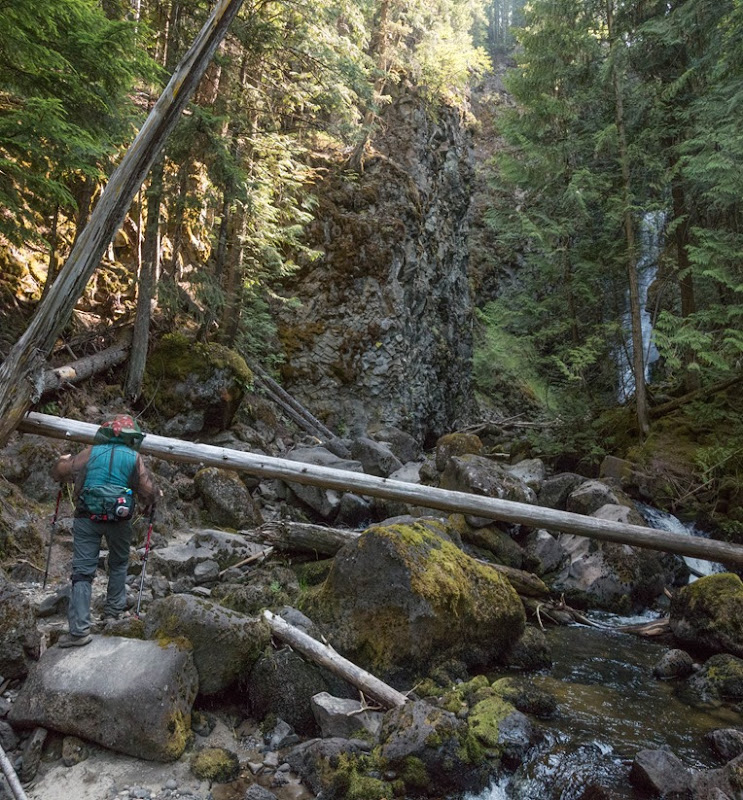 As the name suggests, the falls are in three sections. What I wasn’t prepared for was that we were down at the bottom of a very narrow canyon with lava walls rising vertically nearly the 70 m above us. 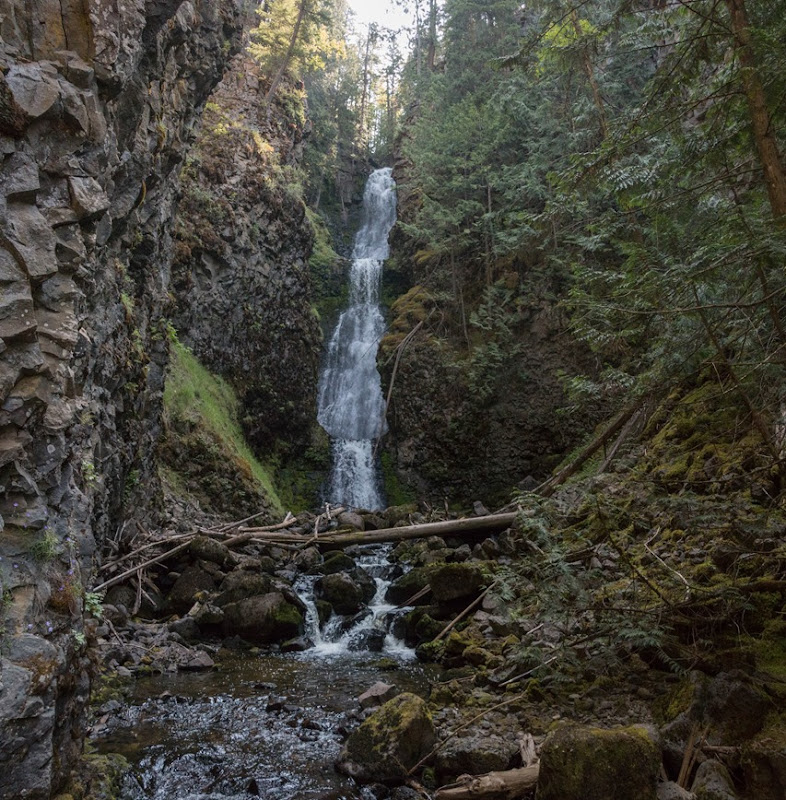 Jennie didn’t have her camera but took this one with her phone. We me in it, the shot at least gives you more of an idea of the size of the falls and the walls. 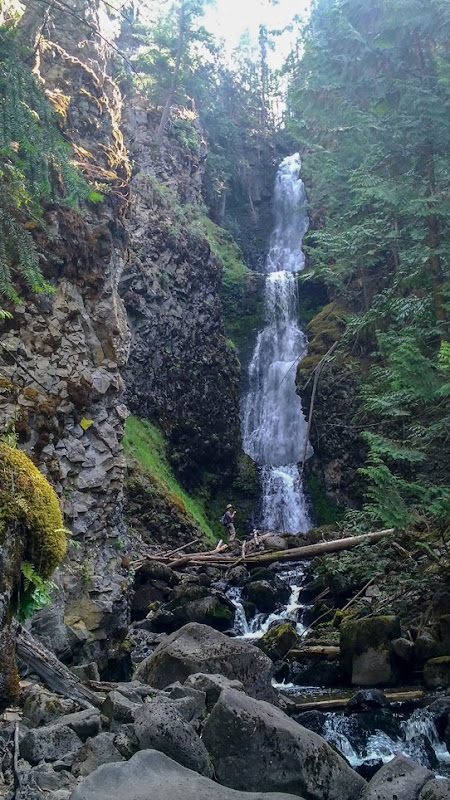 Also at each section of the falls, the water had hollowed out a bowl with a narrow slot in the the lava wall with a wider area behind it. This picture with more of a side view gives you some idea but it is really a “you just have to be here”. 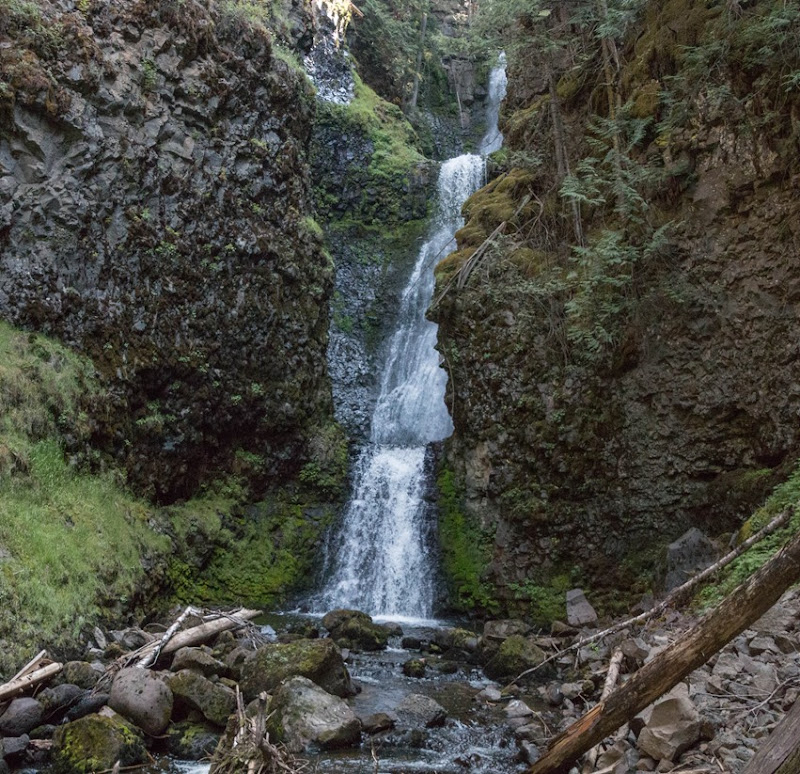 The photosphere from closer in.

I tried a blurry water one. 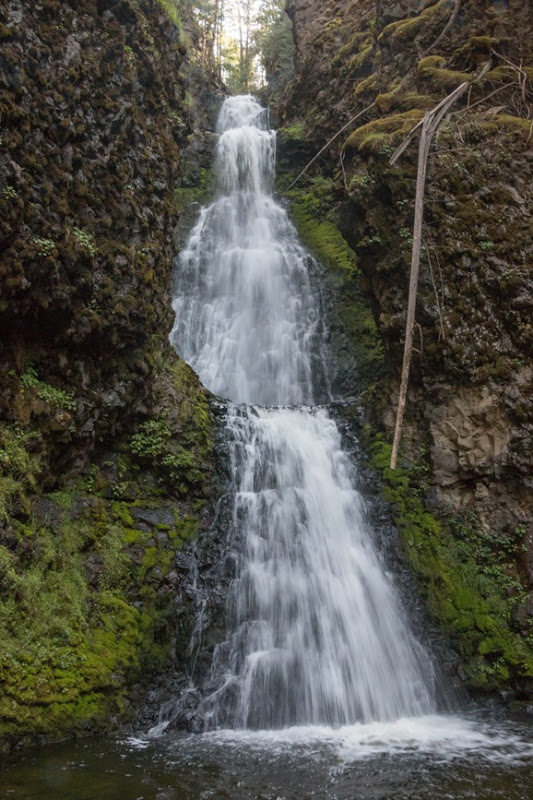 This was a really tough one to tear ourselves away from. There were just so many interesting features and shapes to look at but we eventually moved on and back up that steep trail. In this case, when it is slippery, up is easier. 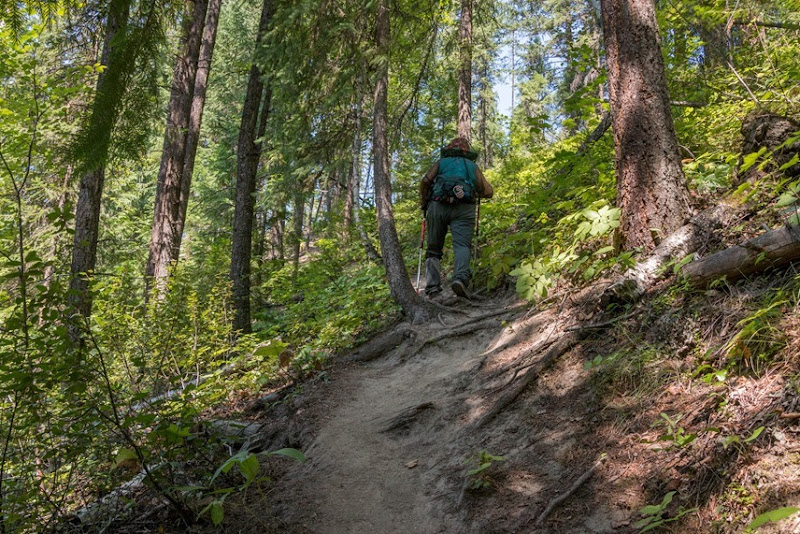 Next up was Silvertip Falls. There are many listed in the park brochures but are not visited very much. To get to the trailhead you first take 5 km of the dirt road that took us to Trophy Meadows. Then it is 2.4 km on a narrower road and finally a couple of hundred yards up a very narrow two track road. A lot of the people at the park are in rental RVs, which could not make this trip.

We did meet a family heading in just as we got back to the car and one other couple part way up the trail.

Silvertip Falls is a long ribbon falling down the mountain side. We could see a bit of it just before the turnoff. 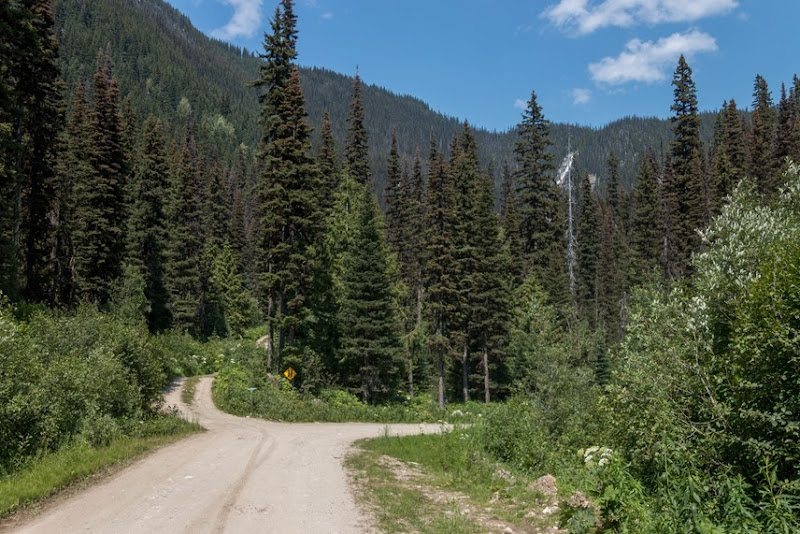 There was only one muddy spot on the access road and no big rocks. Any car could do it. 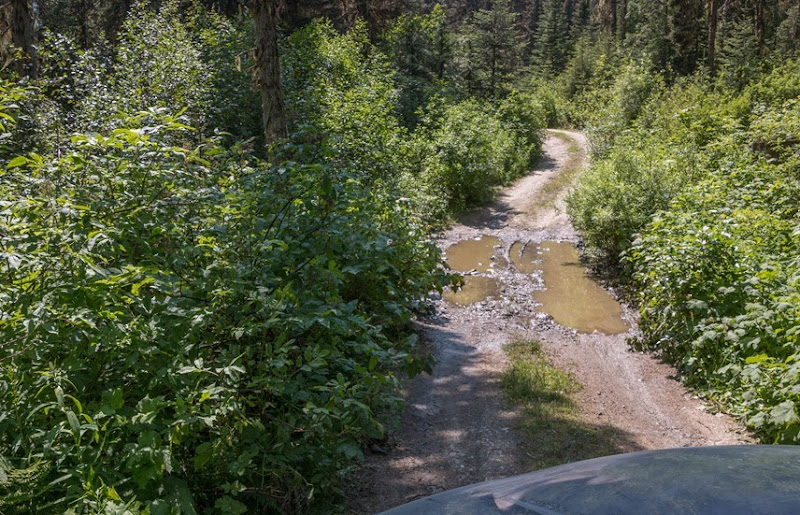 The trail is pretty rough. It is only 0.7 km to the falls and only gains about 80 m in elevation but most of that is at a very steep section right at the end.

You always had to watch your feet for rocks and roots. The vegetation could have used some pruning. 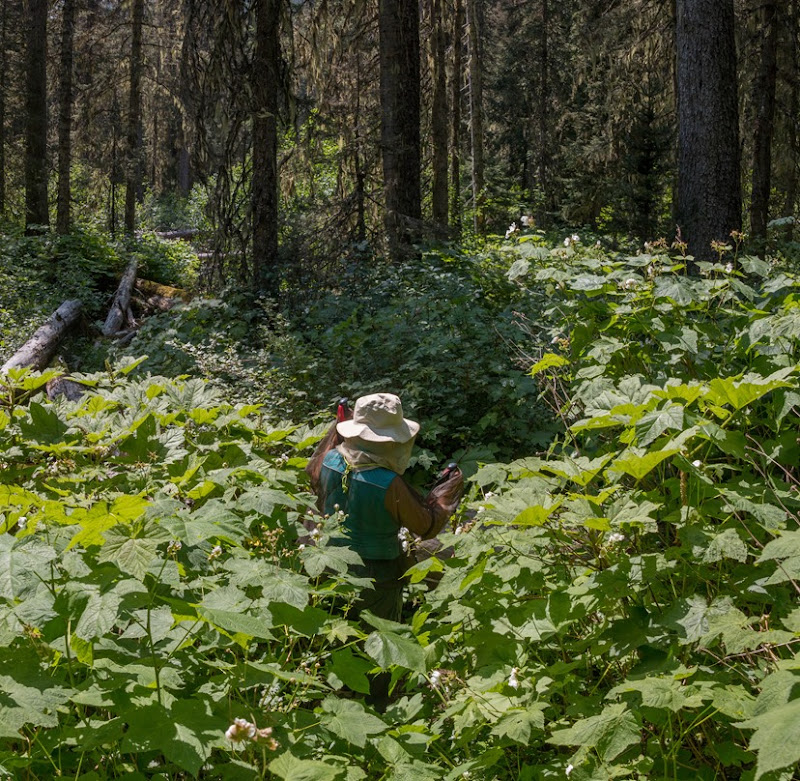 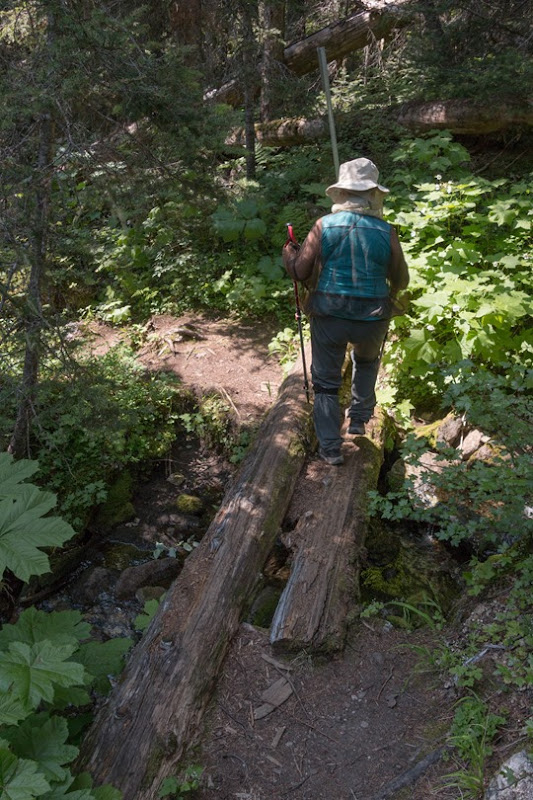 For most of the way we followed along side the creek. It’s under those logs somewhere. 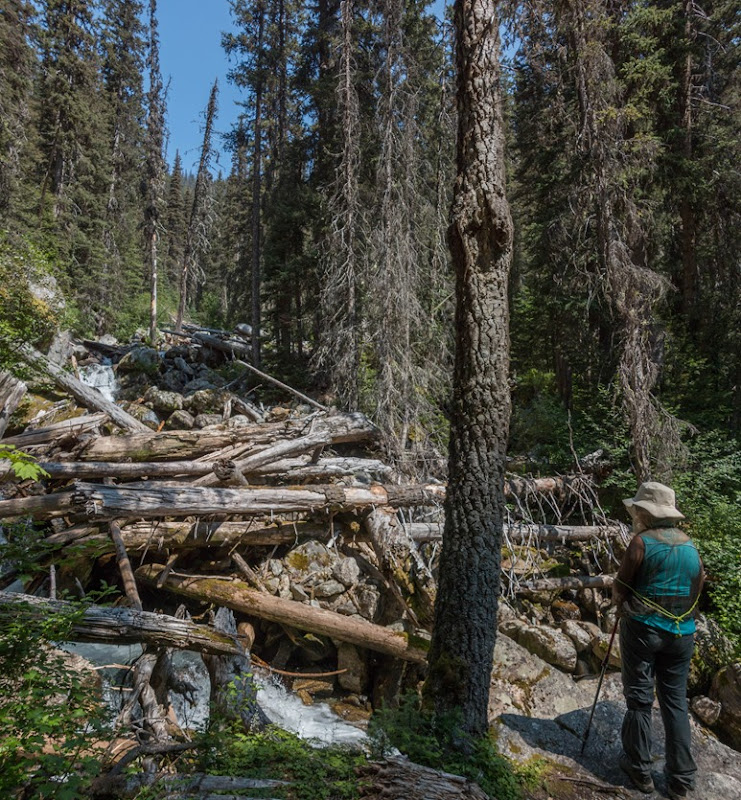 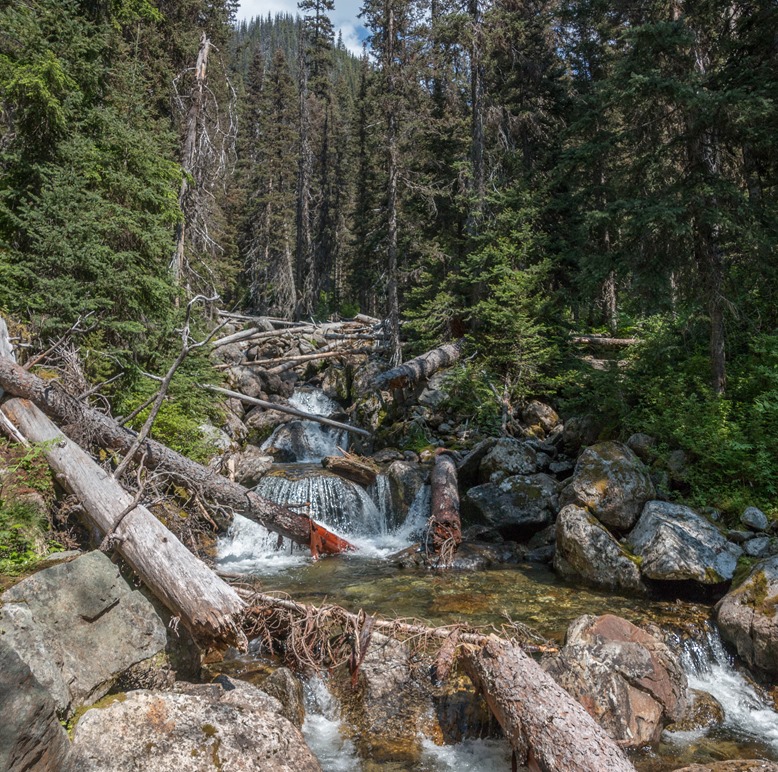 After it started to get steep we met the other couple. They were stopped for a rest. I think the wife was about done. We discussed how the visitor’s center tells you the time it takes to do a hike and not the distance. The time is useless to us slowpokes. We pushed on but we never saw them again so I guess they turned around which was a terrible shame because they were less than 100 m from the falls.

As I said the last section was steep. 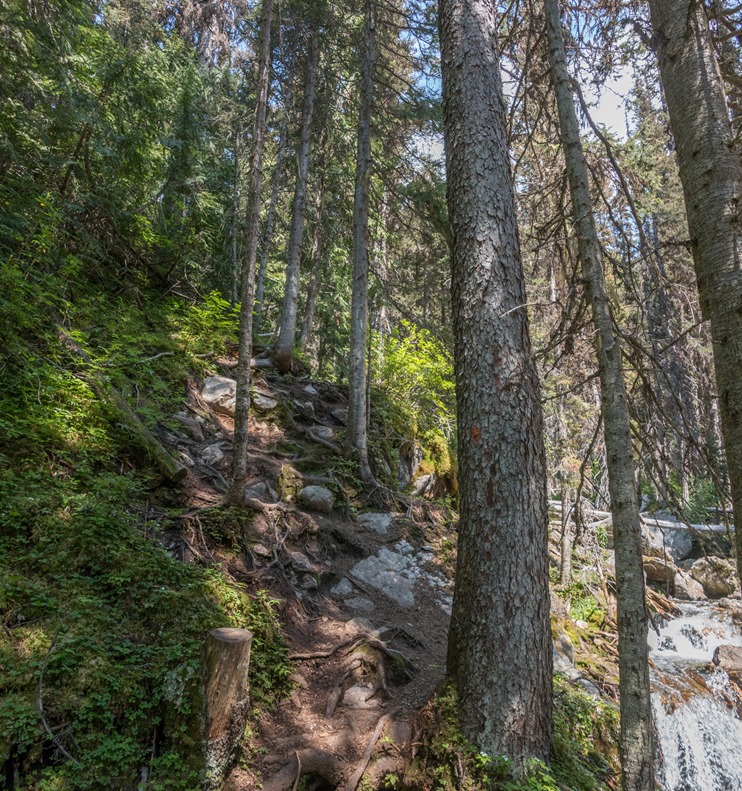 But it was really worth the effort. 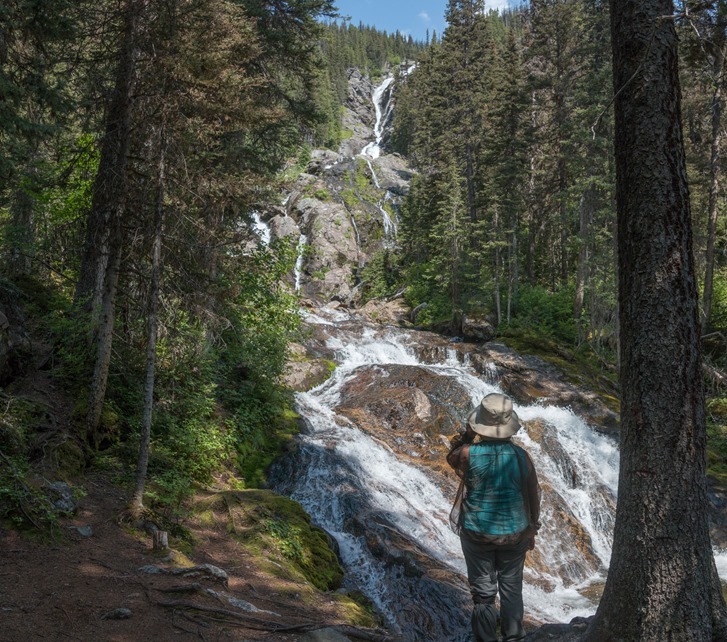 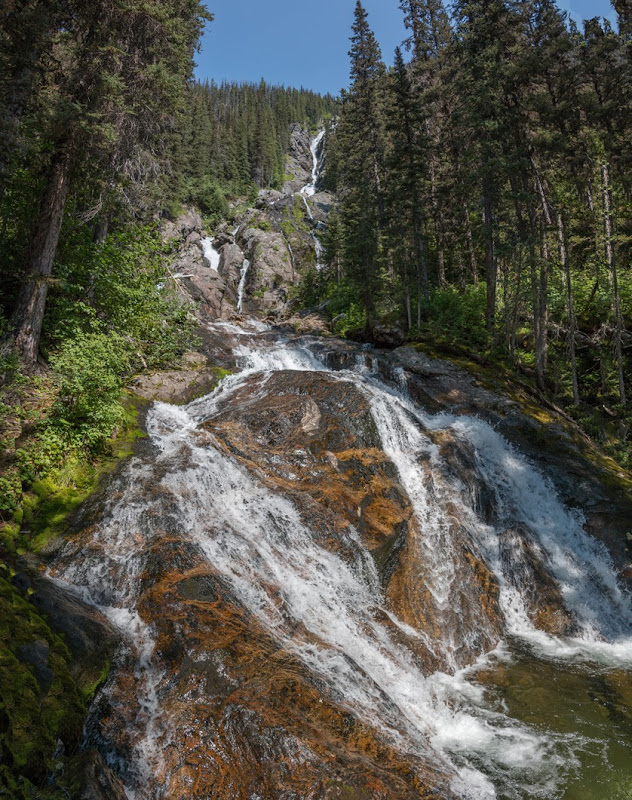 We loved the lines and colours n the rock right in front of us.

Not a bad place to have lunch. 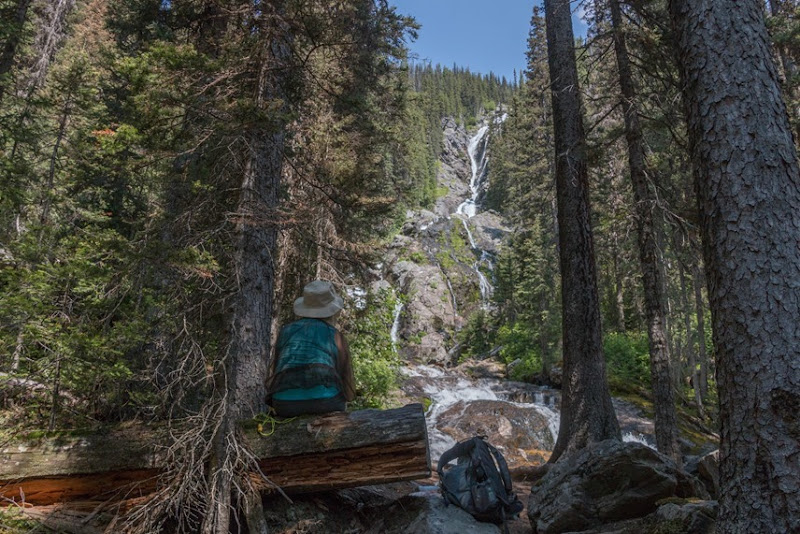 I think we got there just in time because the shadows started creeping across the lower section. 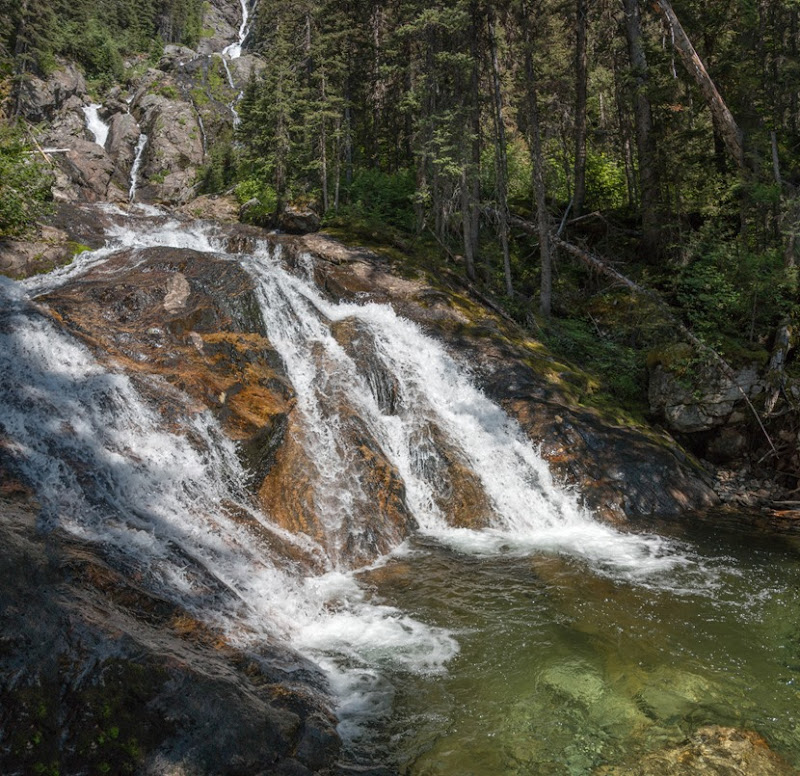 Another place that it was tough to leave.

Next up was another of the major sights of the park. The parking lot for Spahats Falls is right next to the park highway and it is less than 100 m to the viewpoint.

The falls have carved another massively deep canyon through the lava on their way down to the Clearwater River. The first view you get is down the canyon with the falls not visible beneath you. You can see the main viewpoint on cliff to the right. 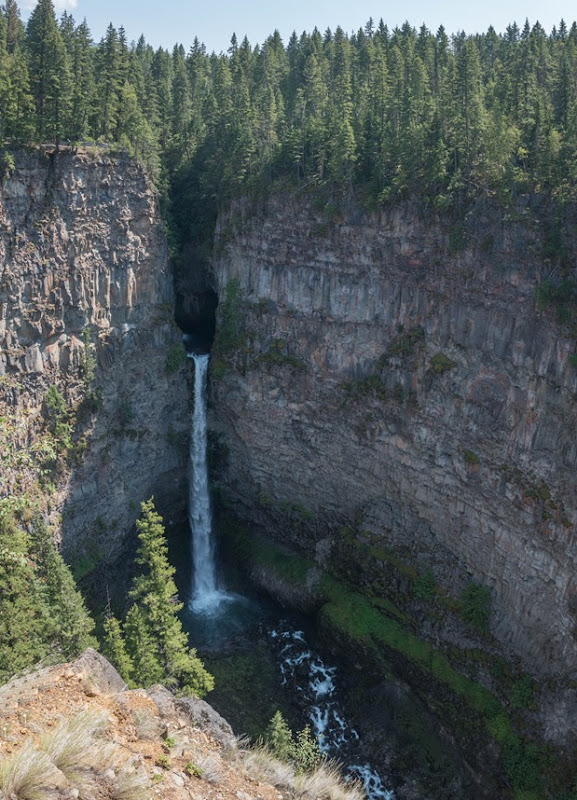 The falls actually have two section. The upper, hidden one comes down into the huge pocket from the left. 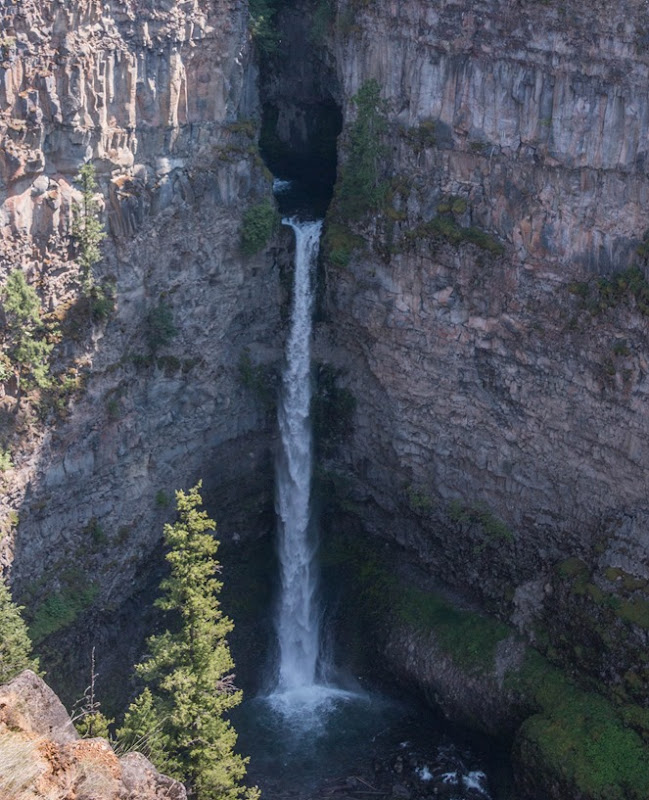 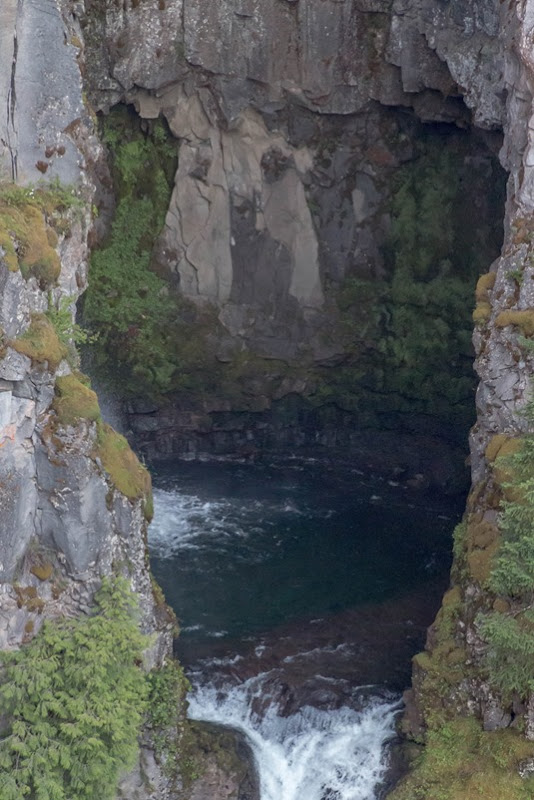 Back at the parking lot there is a Belgian Waffle stand, for some reason. I had read that they were real Belgian waffles made from dough rather than pancake mix and that I should try one. Who am I to argue. 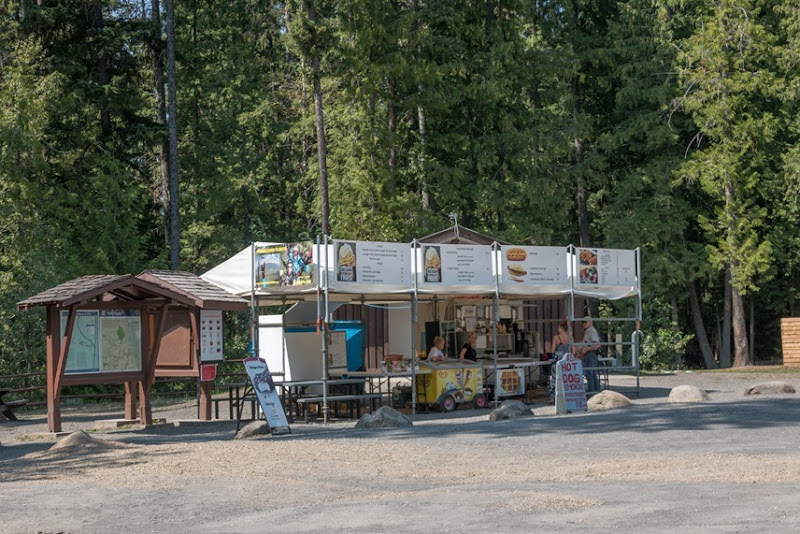 By now it was very hot so we got some ice cream as well. It was quite the sugar hit. 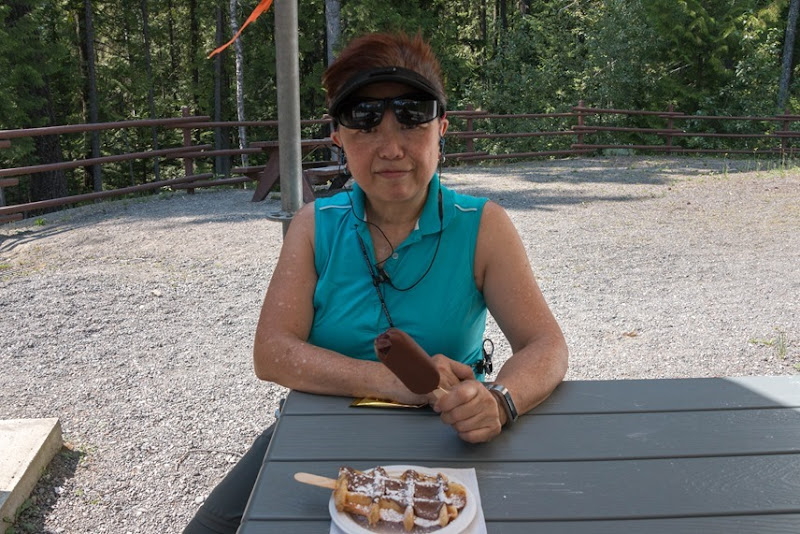 We headed home for a nap to wait for the restaurant we had chosen for dinner to open at 5 pm. So we went back to Clearwater for a nice light snack at the Hop N’ Hog. 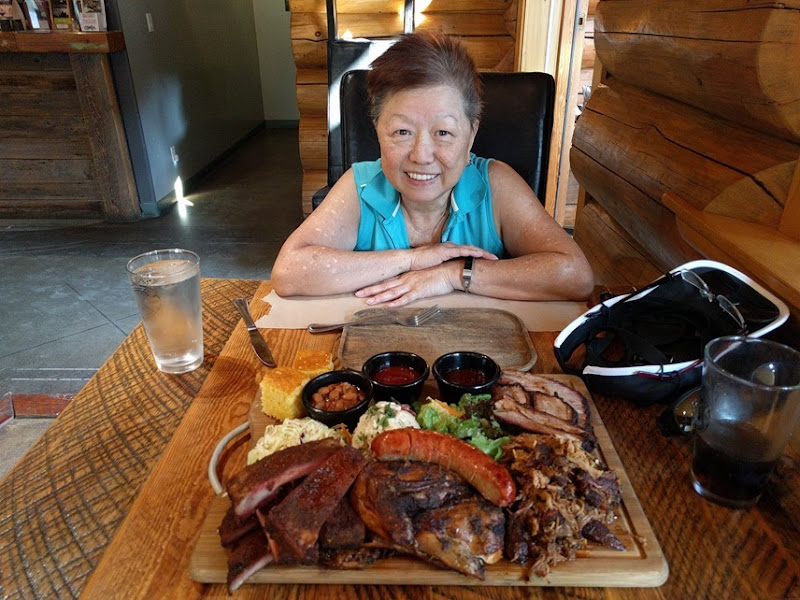 This was the BBQ platter for 2. It was very good. We could only eat about 1/3 of it and took the rest home for probably another couple of meals.

On the way home we did another quick stop in a Spahats Falls to see if the sun had swung around enough to light the falls. I guess it never does this time of year because it was about to set and the shadow line seemed to be in the same place. 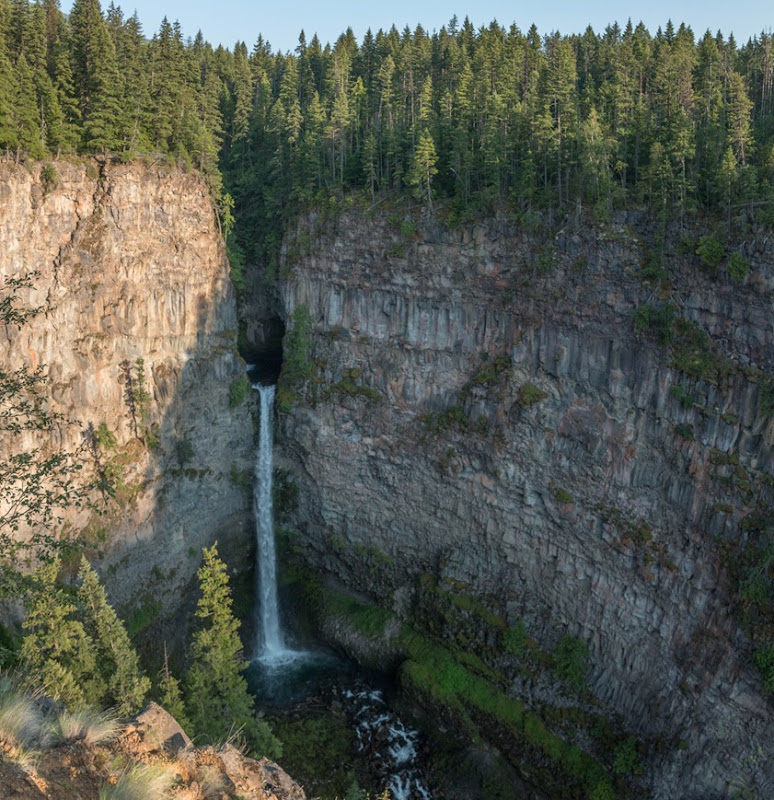