Let’s just say that today was not a good day. We drove over 80 km of dirt roads to see two sites that were very underwhelming and to not see one site that we didn’t realize was closed and now unmarked. To top it off we got not one, but two flat tires.

I will apologize in advance for the very negative mood of this post but man, what a day!

I had read in someone else’s blog about a drive to some interesting geologic sites. The pictures in the blog didn’t look that inspiring but in general I discount this because there are a lot of bad photographers out there. We had also seen write ups in the brochures I had gotten from the visitor’s center in Port Hardy.

I looked it up online and got this map. 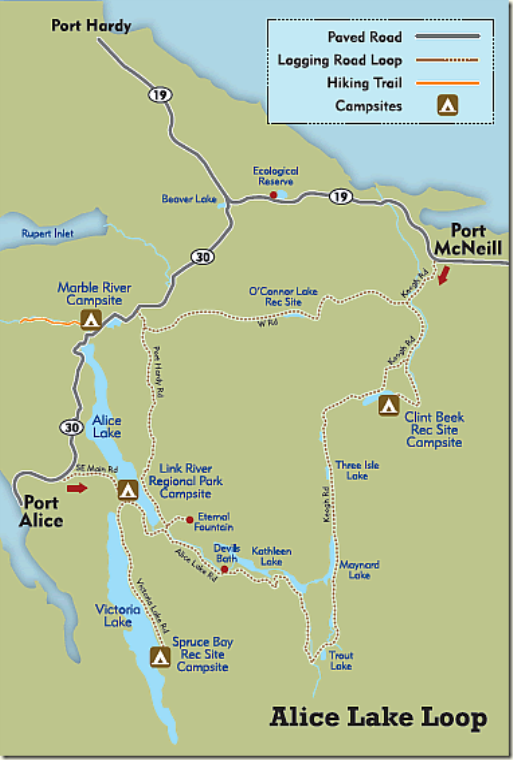 The two sites they mentioned had interesting names. Canada largest cenote was called Devil’s Bath and then an underground creek emerging from part way down a cliff and disappearing into a sinkhole at the bottom was called the Eternal Fountain.

I decided that we would drive the paved road to Port Alice and see if their visitor’s center had more info, drive to the two places and then decide if we felt like completing the loop up to Port McNeill or just turning around.

So once in Port Alice we talked to a young girl at the visitors center, who unfortunately was not from Port Alice. She gave us a map and a brochure, where someone had driven part of the loop, which gave turn by turn instructions along with mileages. It also went to a third site called Vanishing River, which also sounded interesting.

This is the map she gave me. It looked similar enough to the one I had, that I didn’t very closely at it. 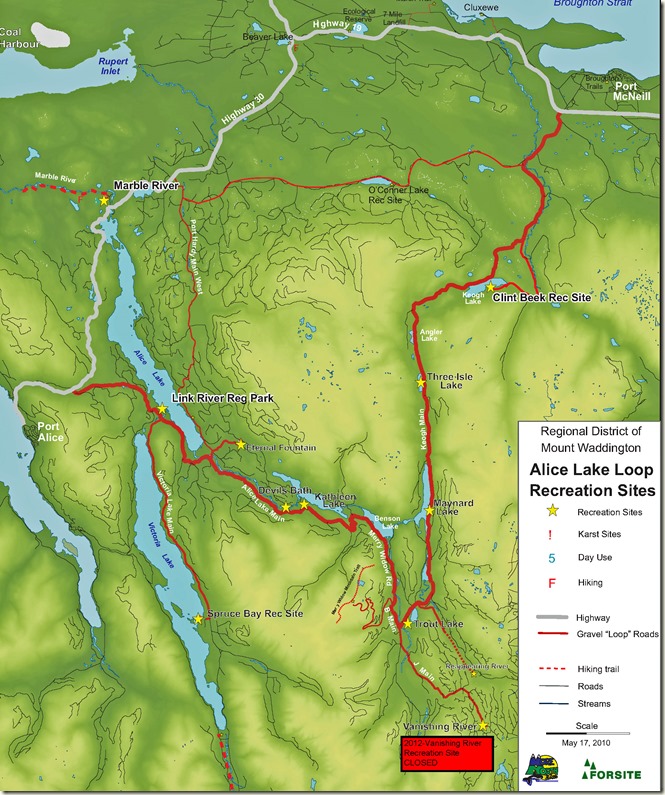 I am not sure if you can read the little red box in the bottom right but it says “2012 – Vanishing River Rec Site CLOSED”. There was no mention of this from the girl or in the brochure. You might also notice from the map, that trying to find the Vanishing River doubled the length of our drive on the dirt roads.

Anyway, off we went. The road themselves were not in that bad a shape but they are narrow active logging road, which meant possibly meeting a monster logging truck. Thankfully at least that didn’t happen. 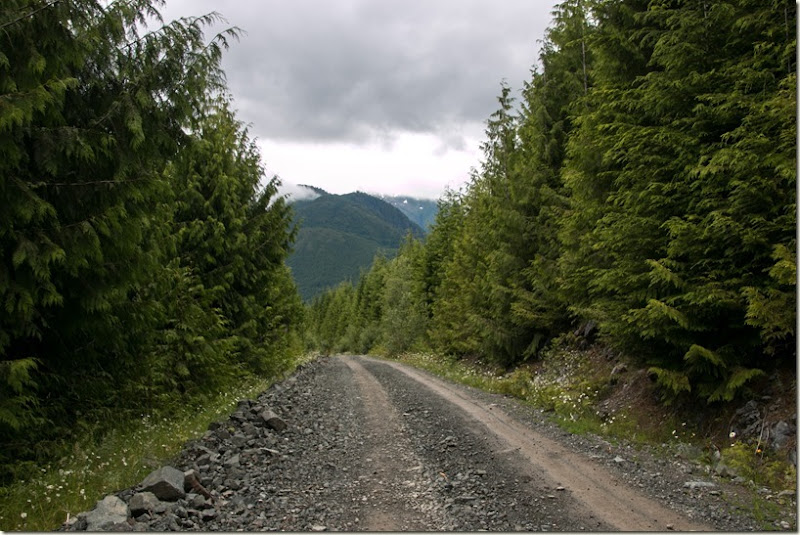 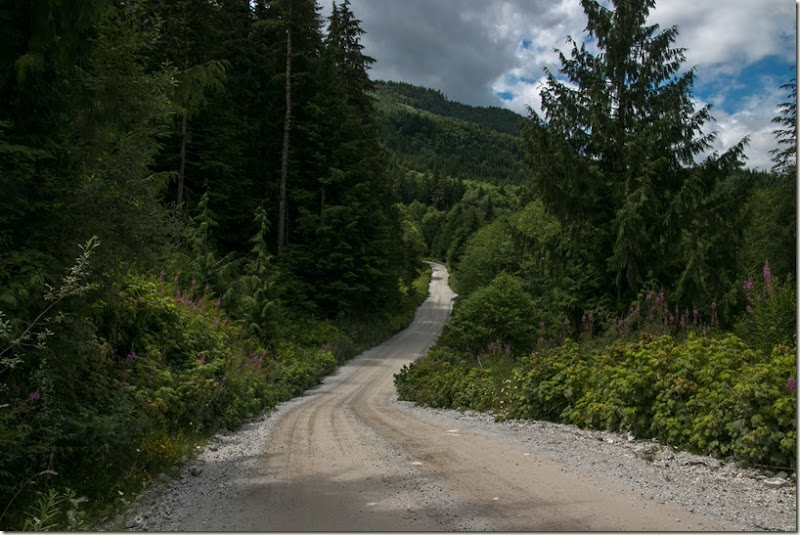 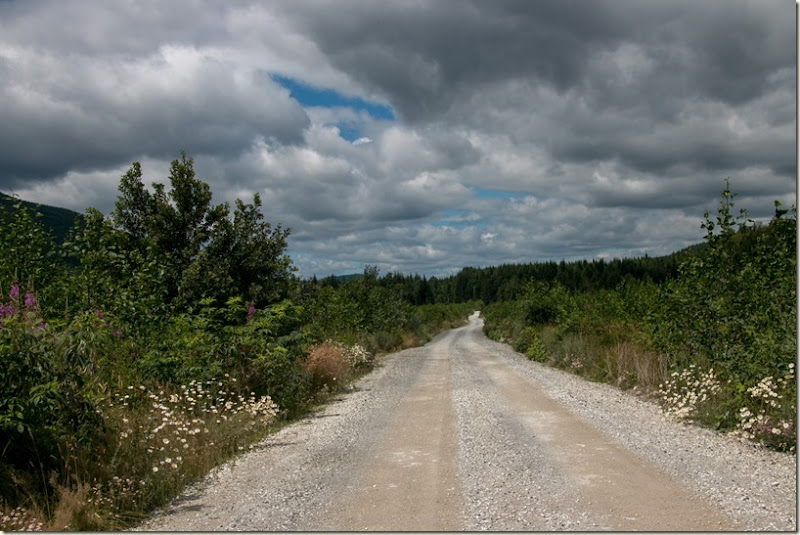 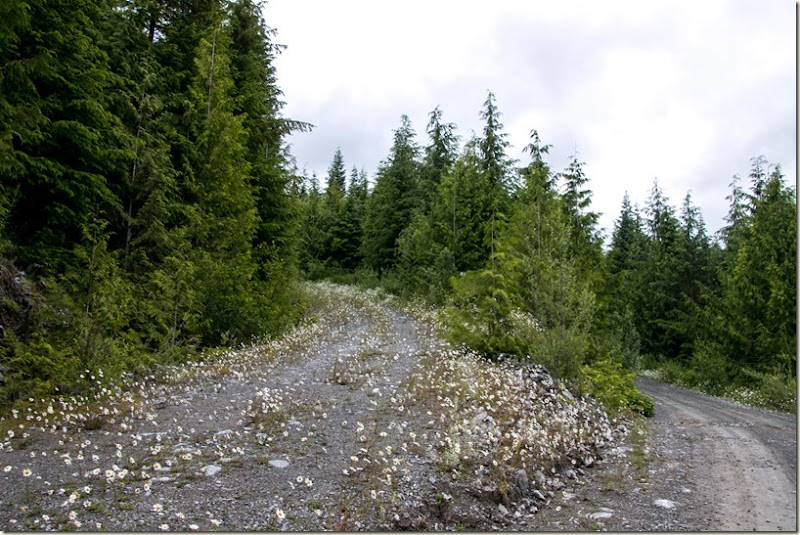 There were a few rough patches with some sharper than I would have liked stones but I just went over them really slowly. I actually wasn’t all that worried about the tires.

We arrived at the Devil’s Bath. 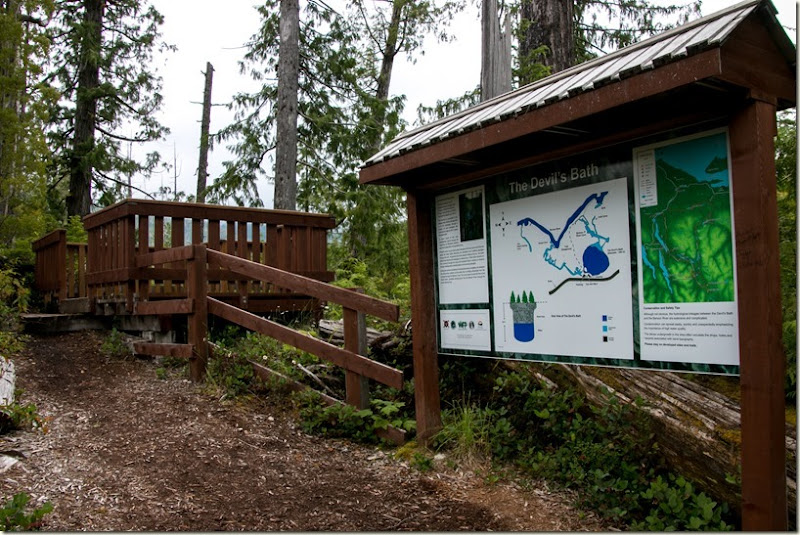 Here is the description from the board. 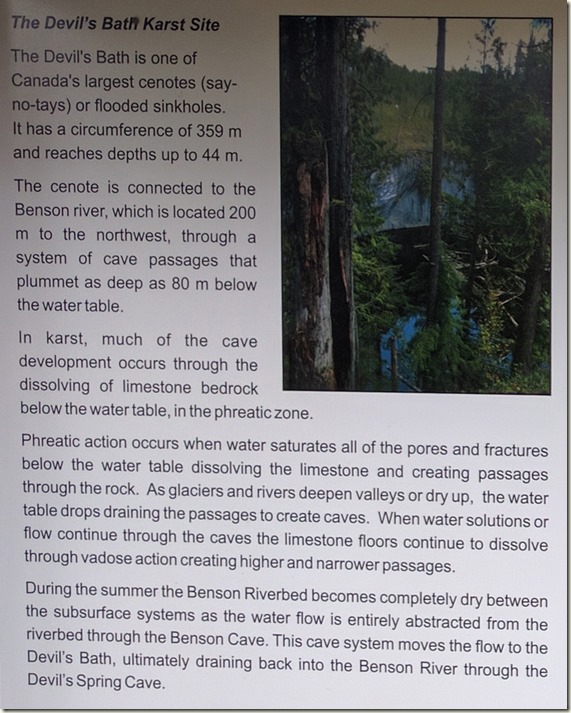 It is not a good sign when even the picture on the info board is obstructed. 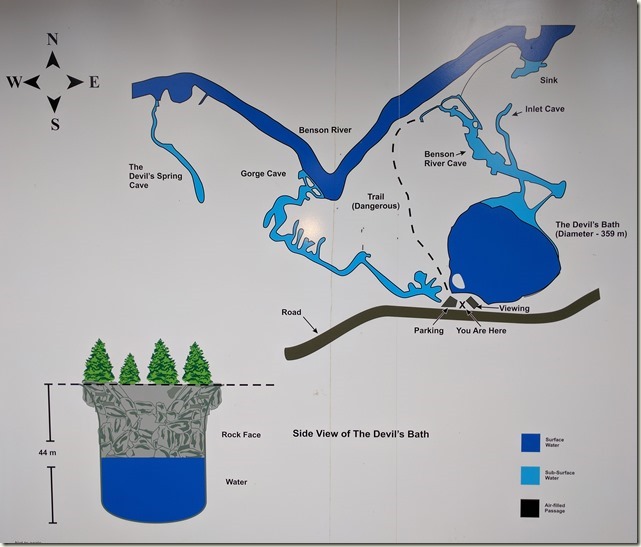 These are the best I could do. 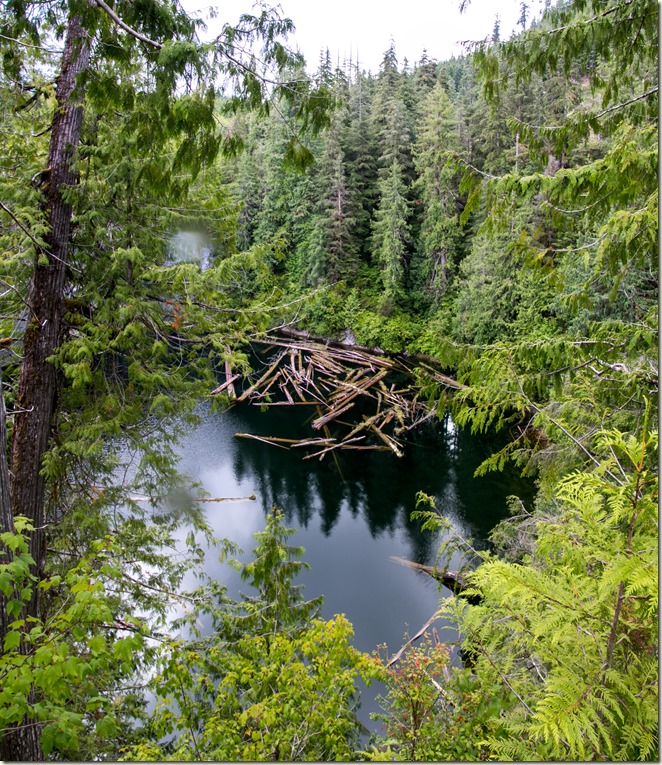 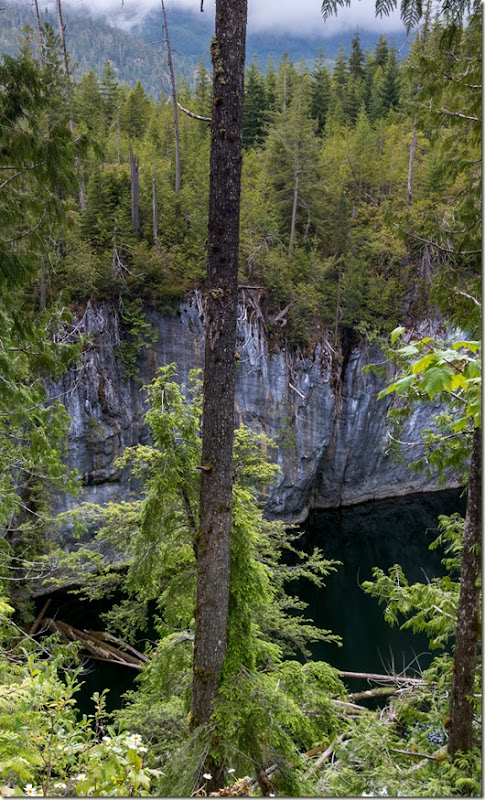 There was a trail on the info board marked as (Dangerous). I looked at it and it was overgrown and very steep so a no go.

The brochure said to drive down to the Vanishing River and then turn around and come back passed the Devil’s Bath to the Eternal Fountain and then continue on back up to the highway.

On the second map you can see a little squiggle beside the road on the way to the Vanishing River. It is for a hike called the Merry Widow. We stopped at the turn off for it to have lunch. I was going to drive the side road up to the trail head but there was a sign saying that they were working on the road. To add insult to injury, we later found out that the road climbs up above the tree line and the hike is in an alpine meadow with great views.

We had met a lady in an very off road Jeep at the Devil’s Bath. After we had driven well passed the mileage mark where the brochure said the Vanishing River should be, we saw her coming back down the road. She said that she had gone a long way up and found nothing. At one of the intersections we had passed she had seen a small sign indicating that it was closed but had at least expected to be able to tell where it was. I guess 4 years of growth has obscured it. We turned around there and made our way back towards the Eternal Fountain.

One of the stops on the way, from the brochure, was an old mine site.

I am not certain but I suspect that parking here may have been our tire’s undoing. 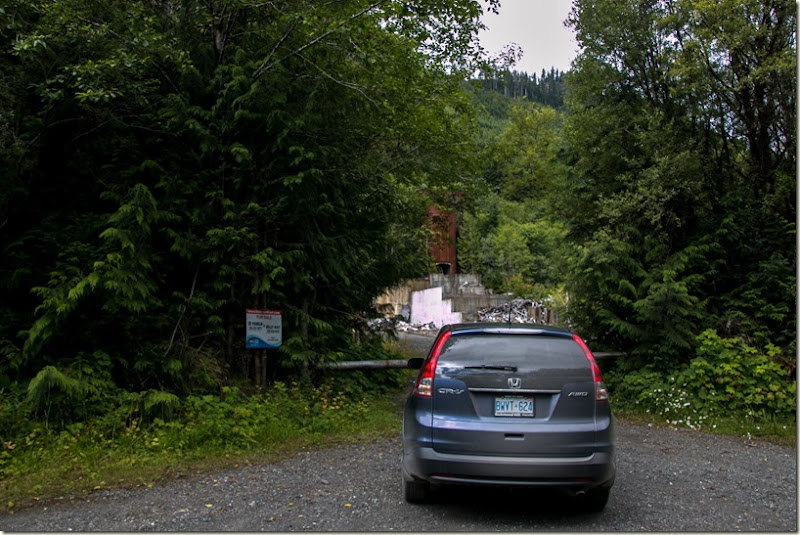 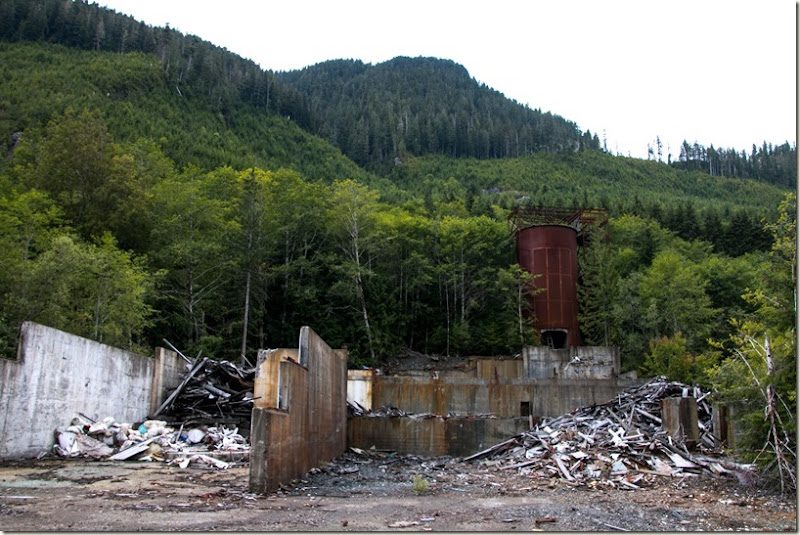 There was a lot of scrap metal lying around. 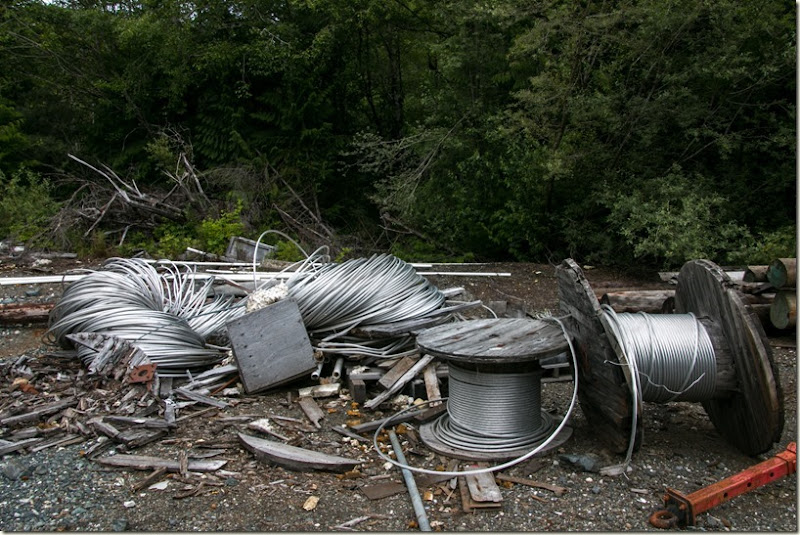 The site is for sale. I thought that the name of the web site to go to was a bit inappropriate. 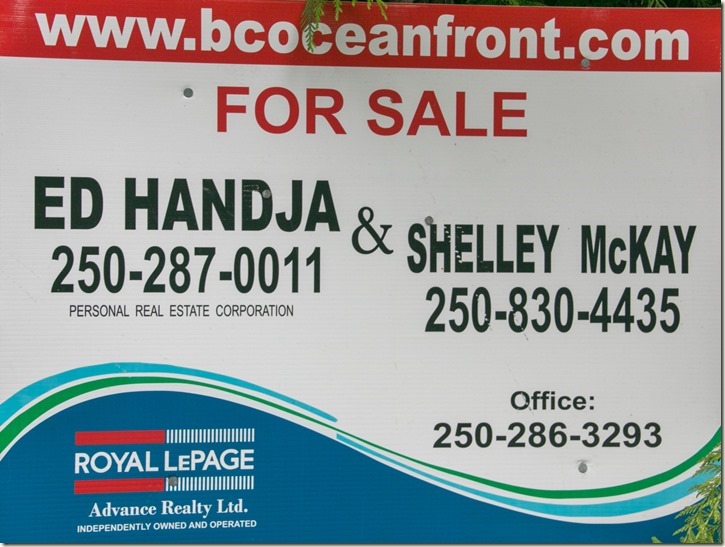 Jennie wasn’t feeling all that well from all the bumps and tight turns so she went for a walk along the road to pick some daisies. 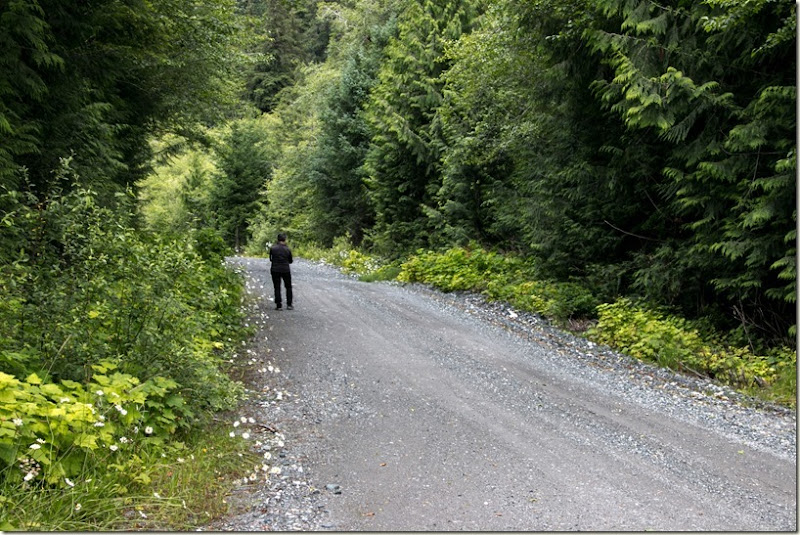 We met the lady with the Jeep walking out from the fountain. She said it was better than the rest. Not exactly a ringing endorsement. 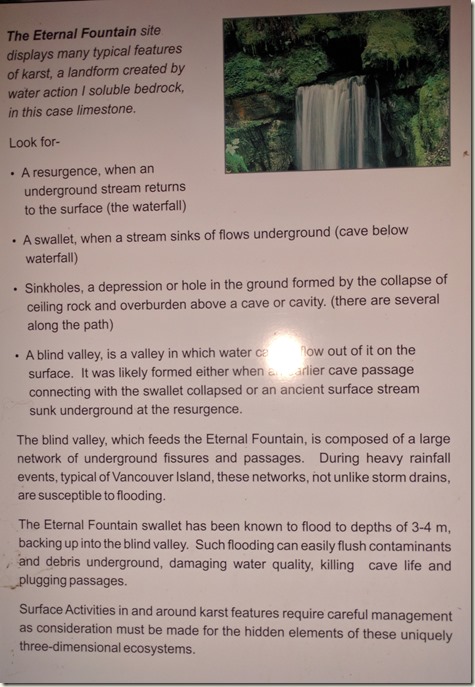 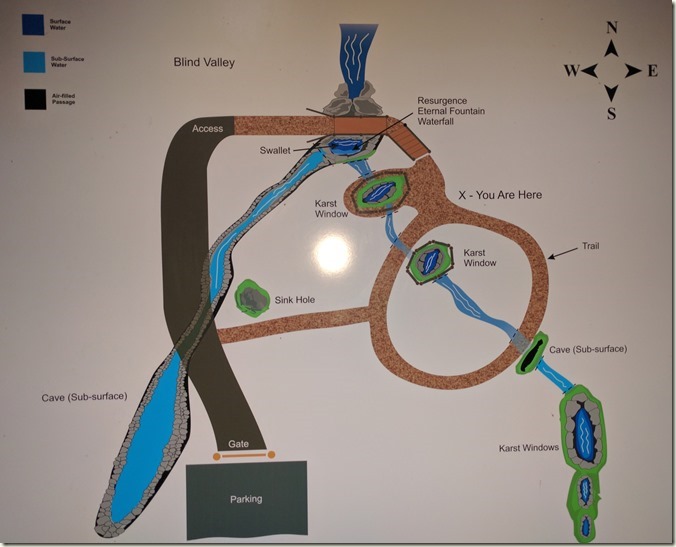 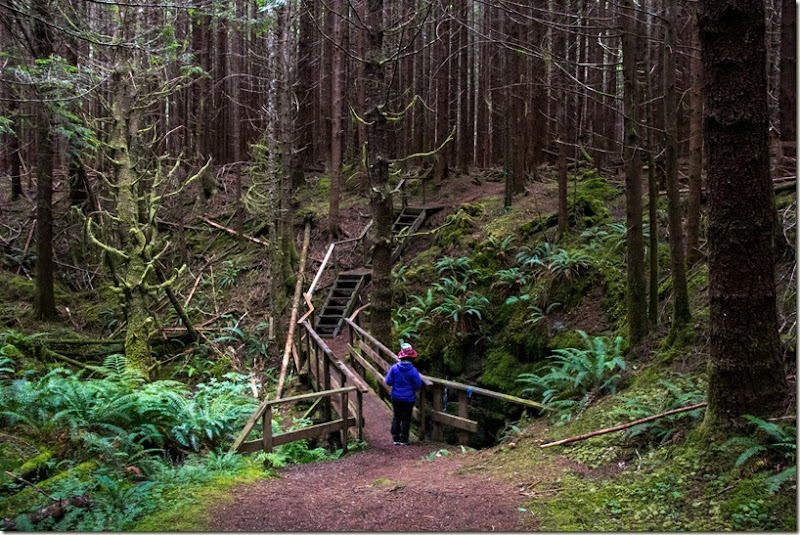 Oops, it is right there under the bridge. 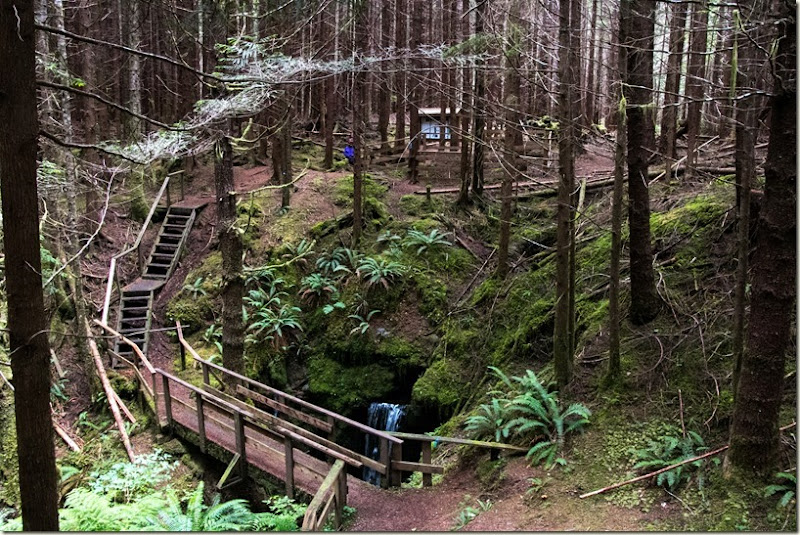 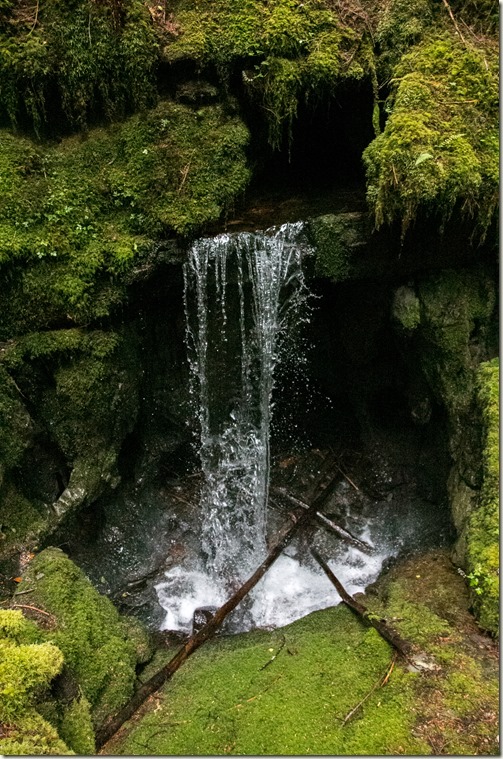 We took the short trail to some other sinkholes. Yup, it’s a hole! 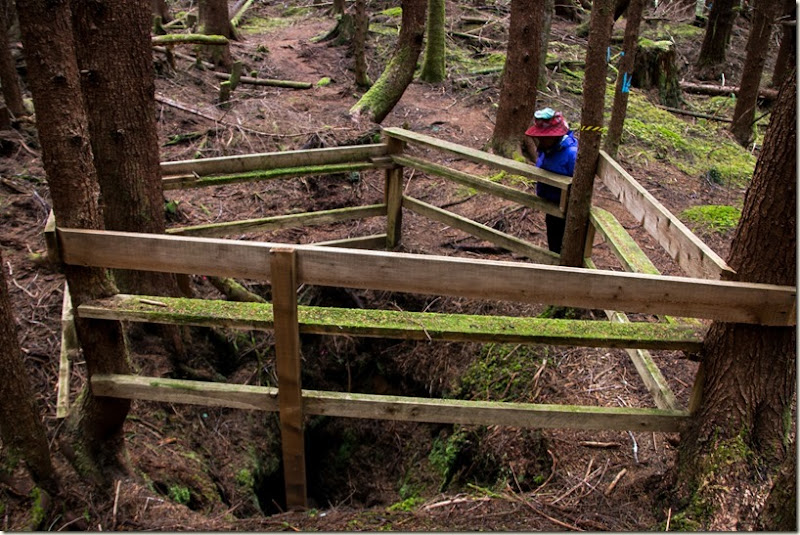 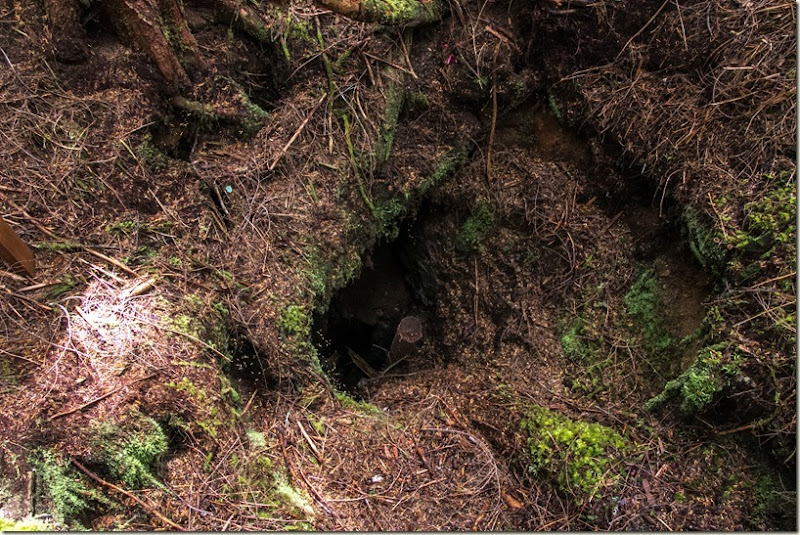 By now we were in a pretty bad mood. WE ARE OUTTA HERE! 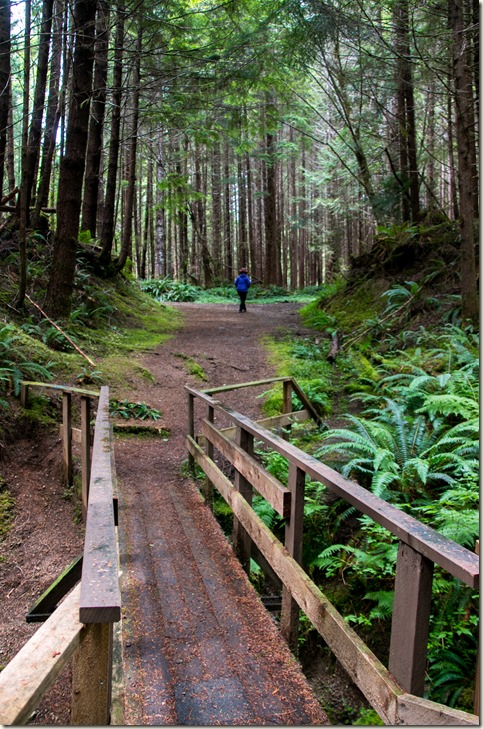 Then it got worse. I turned on the car and noticed that the tire pressure warning light was on. Sure enough the passenger front tire was completely flat.

Out comes the jack, off comes the tire and on goes the temporary spare. By now I was not thinking very straight and had forgot to set the parking brake. Thankfully just as I tightened the spare the car rolled off the jack. The spare is supposed to be at 60 psi but was only at 30 so I used my little compressor to bring it back up to 60.

BUT we still had 15 km of dirt road before we even got back to the highway and then about 35 to Port Hardy. The road to the highway was the smoothest section we had been on today but I took it really slow anyway. I have no idea how tough the spare is.

Part of the way out we encountered this deer on the road.  Instead of running into the woods, it took off down the road eventually switching to its high speed 4 leg bounding mode. 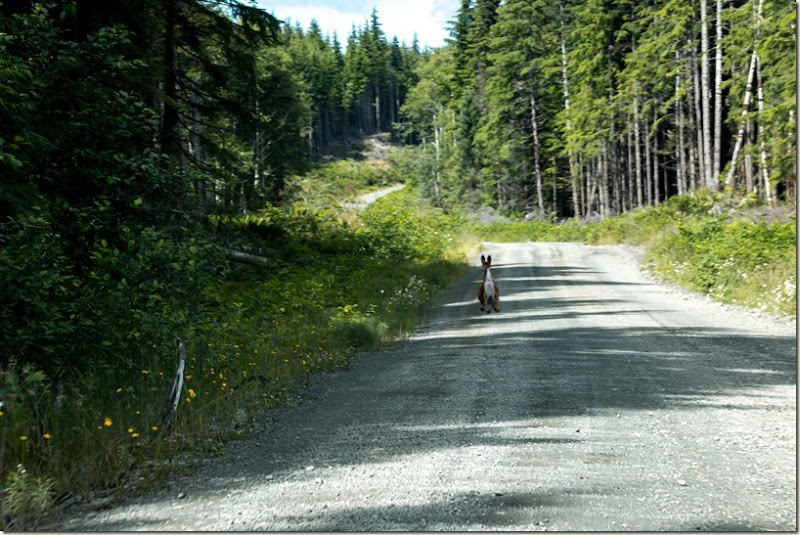 I tried getting close to it, backing off and honking the horn but it just kept going. I was worried that it was going to over exert itself but after almost a kilometer it finally jumped into the woods and watched us go by.

I set the GPS to take us to the only tire place in Port Hardy. As with the rest of the day, once we got there, there was no tire store to be seen.

Just down the road there was a Ford dealer so I thought I would asked them where it was. They said that the tire place had moved but that they could fix it themselves.

As we were talking, one of the other service people asked if we had seen that the rear passenger tire was going flat. We turned around and you could almost see the car sink to the ground. I guess if you are going to have two flats, the best place for the second one to happen is at a tire repair place.

Driving into Port Hardy I had noticed the the car was a bit wobbly but I had just thought that it was just due to the two mismatched front tires.

I was worried that the first tire was ruined because I didn’t know if I I had driven on it for any length of time. Thankfully it was repairable and since the second one went flat as we watched, it too was repairable. They actually found a chunk of metal inside one of the tires.

If they had not been repairable, the Ford dealer did not have the correct size but while we were waiting they called tire dealer and they did have a matching set, just in case.

The poor car and it’s occupants have had a tough day. 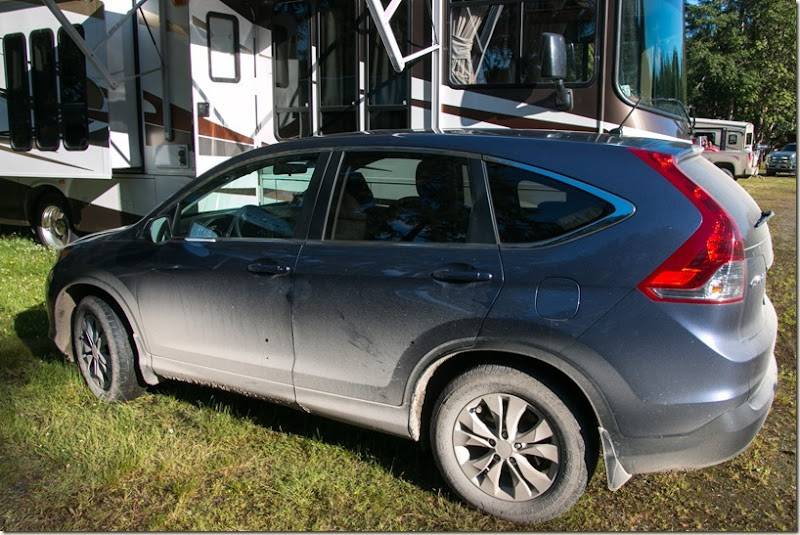