This is probably a first, a post with no pictures. We have already been on our path home on other trips so we didn’t bother taking more pictures through our bug splattered, sun reflected front windshield.

Most people can just skip this one. I only want to record some thoughts or unusual events so that I will remember.

We were in severe “going home mode”, Long days of driving with not a lot of stops.

We got up to be at the ferry, one hour before it left at 7:45 am, to secure out reservation. It ended up being only 3/4 full. It was a bright sunny day and the water was calm but after we left the dock there was not much to see so we went back to bed in the RV for the rest of the 2 hour trip.

There was a long line of cars at the Peace Arch border crossing. They have an interesting idea here to stop all the cars from just idling and creeping slowly. When the line gets long enough there is a stoplight. If you are behind it and it goes red you know you have about 10 minutes before you will move again so you might as well turn you car off. Once it is green you will make a large jump forward.

It took us about 1/2 hour to get to the booth. The agent asked us if we crossed the border often in our RV, which he probably already knew.. I didn’t quite know what to make of that but said “Yes, at least a couple of times every summer”. It seems if was trying to figure out if we knew the drill and would know what foods we couldn’t bring. We rhymed off what we had and said that we were making a beeline for Ontario and we were on our way.

As usual I-5 was very busy heading towards Seattle but once we turned east onto I-90 the traffic really thinned out. Going across this section of Northern Washington is pretty boring. There were a few picturesque spots but mostly it was scrubland to the horizon.

We arrived at the Moses Lake Walmart at around 6 pm. Since we got up around 6 am it had been a long day. We had stayed at this location  on our way out but when I drove into the lot they were paving the section where I had parked. The rest of the lot that I could see was very busy. After wondering what we were going to do for the night and (horrors) actually looking up some campgrounds, I remembered the “Walmart Parking”  website had said that there was a large area around the back near the truck loading bays. Sure enough there was lots of room, that we shared with 3 other RVs for the night. It was a bit noisy though because it is right next to a busy highway.

It was so hot sitting in the lot that we turned on the generator to use the air conditioning. The heat was even too much for it. We may have stressed it a bit by running both AC’s but it eventually shut down saying its oil temperature was too hot. Even our inverter issued a warning beep that it was also  getting too hot. There was a fairly strong wind blowing so once I opened the bay doors to both of them they cooled off enough.

On the way out we had stopped in Missoula, Montana the night before stopping at Moses Lake. The Missoula Walmart had a small lot and has a reputation of getting very busy with RV’s in the summer. I decided to make it a longer day and try and get to the Walmart in Butte, Montana. It has a monstrous lot with easy access but it was a long drive at about 7 hours.

I made sure that we stopped at a rest area every 2 hours and even had an almost hour long nap at lunch so it made the drive seem not as long.

I also love driving east because the prevailing winds give us a strong tail wind which makes the RV so much easier to drive and does wonders for the gas mileage.

The scenery in western Montana made the drive through there very enjoyable. Lots of far off mountains views and close up buttes.

We got to Butte at around 6 pm local time. I counted 5 other RVs in the lot. Later that night I went out for a short walk and there were now 18. When I looked out in the morning there were even more, maybe 25. It was a very quiet night, though.

I don’t know how people can drive for that long especially in a big RV. Leaving one Walmart at really early and getting into the next really late. I certainly can’t do that. I guess two drivers could handle it but that won’t happen with us so we usually try and arrive late in the afternoon for a relaxing evening.

Not much to say today. Eastern Montana is either huge fields of corn or wheat, or more scrub land. An easy, mostly flat day of driving. We did do a couple of long climbs to around 6000 feet, one of which was the continental divide. The long down hills are nice. One was a great gradual one, where I didn’t have to touch the accelerator for 10 miles.

Again, there was a very strong wind. It was mostly a tail wind and boosted my gas mileage from the normal low 7’s mpg up to around 11 or 12 mpg at times.  Not much for a normal car but that saves me a lot of money in this monster. The wind sure makes life interesting when it hits from the side though, especially when it is sudden or unexpected as when you come out of a protected downhill depression to an open bridge across a river. The RV did a lot of rather unnerving leaning.

The Miles City Walmart is another big empty lot. At dinner time there only were 2 other RVs.

The map of the first three days. 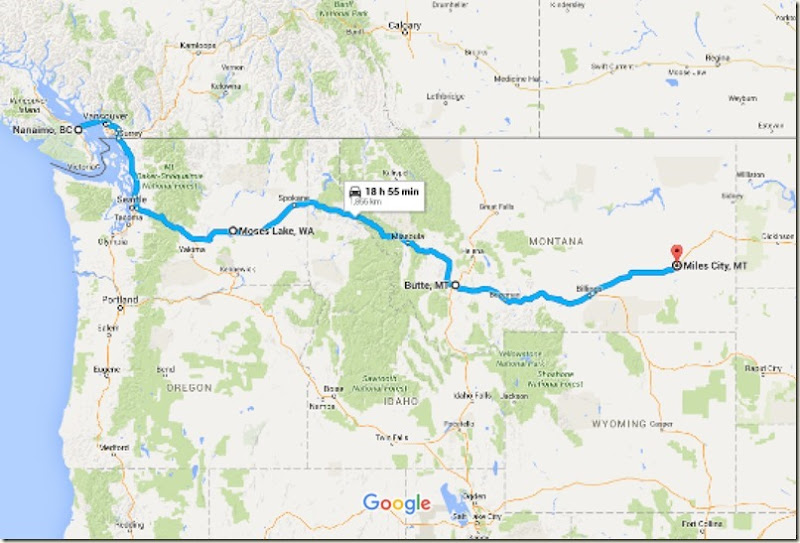 We had been doing longer than our normal daily driving miles so last night I looked at our trip planning software and just committed to trimming one day off our trip to the cottage.

It was the perfect day to do a long drive. Bright and sunny with that wonderful strong tail wind and very little traffic. Western North Dakota had some nice scenery as we followed the Yellowstone River valley. East of Bismarck the highway was mostly very long flat straight stretches off to the horizon, Easy to drive but kind of mesmerizing.

We took extra long stops to break up the drive. After two hours we stopped for an early lunch. After four hours we both had an hour long nap. Did that ever help. After six hours we parked at a rest stop and had our dinner.

Also, I-94 through North Dakota is the smoothest continuous road I have been on. There was not a rough spot in the entire state. They were even repaving what anywhere else would have been new road. I don’t know how they do it with there vicious winters but other states could take a lesson. I suppose it helps that the roads are not nearly as used as in the more populous states.

Some people must really like to drive fast here. Even though the speed limit is 80 mph, we still saw cars pulled over.

We also saw what looked like a car that been blown off the road and rolled over in the center median. It was really messed up. There was a trucked parked there with a long flat trailer. I hope the car just blew off the trailer but there were EMTs there with a back board on the ground so the truck was probably just to haul the wreck away.

The Walmart last night in Fargo was in a more urban setting. The night reminded me on the movie title “Planes and Trains and Automobiles”.

Just as I went to bed, two planes, separately, buzzed quite low over the parking lot. I hoped that we weren’t close to an airport. All night long we heard the low rumble of long trains passing through town. There were also several level crossings where they had to blow their horns.

People in the mid west sure do seem to like their big trucks with very little muffler on them. The Walmart is open 24 hours so it died down a bit but never stopped. There was also the not so wonderful sound of that damned back up beep all night from a loading dock somewhere.

So we didn’t get the greatest of rests.

It was another fairly easy although boring drive today. We almost immediately left I-94, as it headed south and we wanted east. The smaller highway were still very smooth except for about 20 miles on MN 210 and again on US 2. They was also very little traffic and long straight stretches so I never held any one up on the two lanes roads.

While it is nice to be off the interstate and actually see some of the towns we are going passed, I really miss the highway rest stops. I always know where they are, from the map and know that I can get in and out easily. It is harder to plan our stops when I have to slowly cruise through the small towns looking for a suitable place and hoping we see one before we go by.

Another long but easy drive. We got a few views of Lake Superior but not enough.

As we went through Marquette I had to do a fast stop for a stoplight that changed without much warning. We normally put a clip on the cupboard door that has our dishes but we forgot that morning. So we ended up with several Corning ware dishes and some glass bowls smashed on the floor. The worst part is that some of the pieces had gone under the closed slideout floor making them really hard to find. We pulled over into a parking lot and spent about 1/2 hour cleaning up.

We should have stopped at one of the lake side pullouts for lunch but we were a bit early. The GPS map was only showing up to the next turn in Munising. I hadn’t noticed that after that we would be away from the water for good and have an almost 90 mile long straight stretch along a forest lined highway. Give me the open spaces of the mid-west over this any time.

After a final fill up of cheaper American gas, we had an easy border crossing. There was only 2 cars in front of us.

We arrived at the cottage at dinner time. We are hoping to stay here for a month. 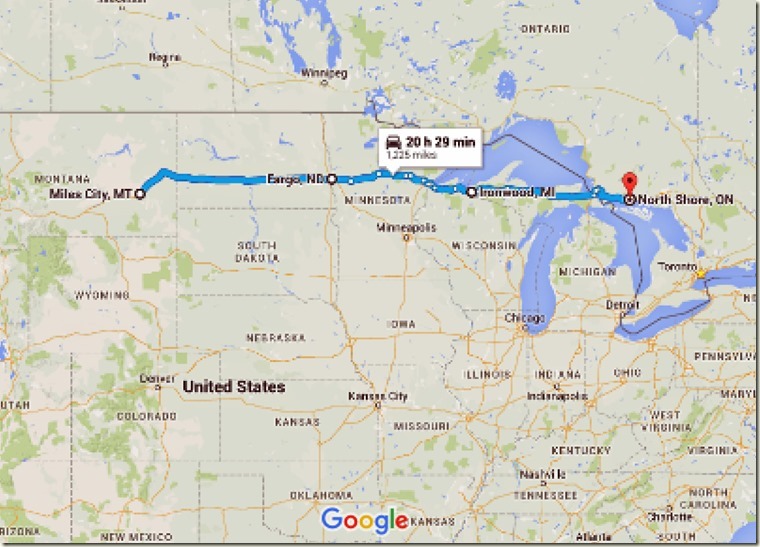