Paul and William didn’t have a car but they wanted to go and see the Haida Museum over on Graham Island near Skidegate before they had to come back for their flight out tonight. We were not sure which ferry we were going to take so Sharon and Steve volunteered to drive them to the 10:30 ferry. We ended up taking that one as well so they hopped out of Sharon’s car and into ours for the ride across in the rain. By the time we had dropped them off and said our goodbyes the rain had mostly stopped.

In the two days we still have on the islands I wanted to make sure we got up to the north end near Masset but the weather tomorrow looked much better so we just went to a few places near Skidegate since we are staying at Jags Beanstalk again tonight.

First up was Balance Rock, which is a big boulder perched on a flat rock ledge. It is right next to the highway. We were really not into any long hikes today. 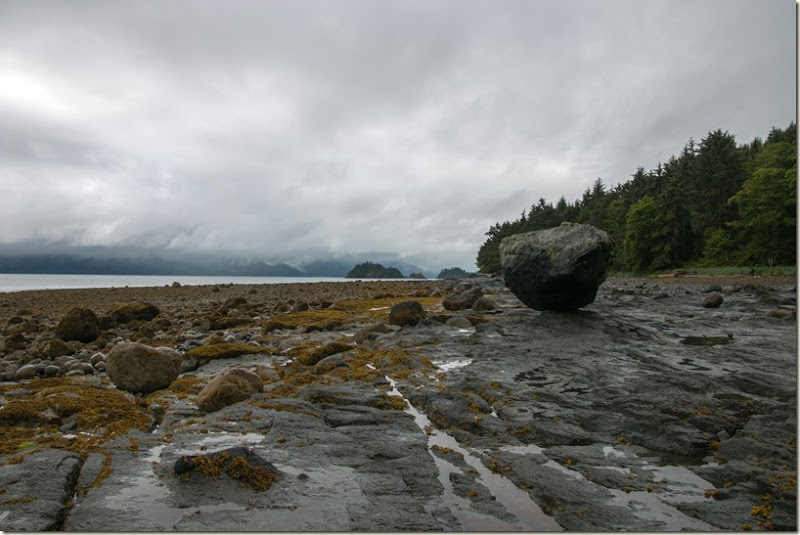 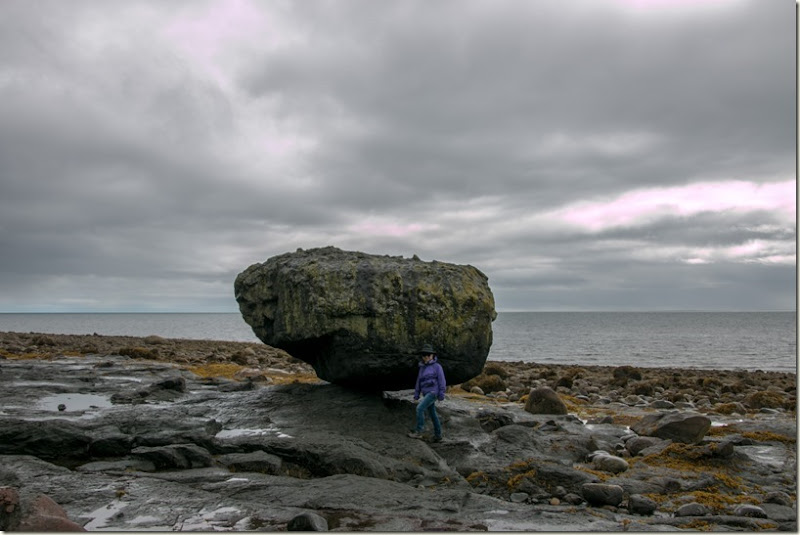 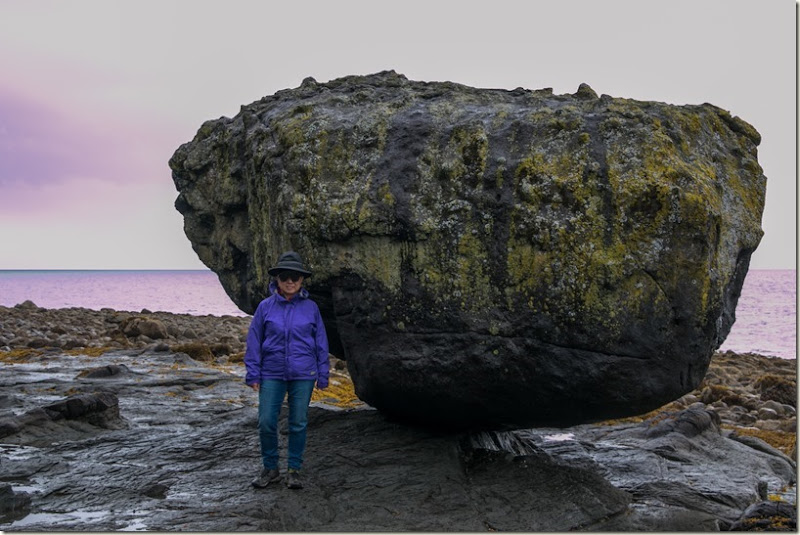 We explored the surrounding area for a short while. 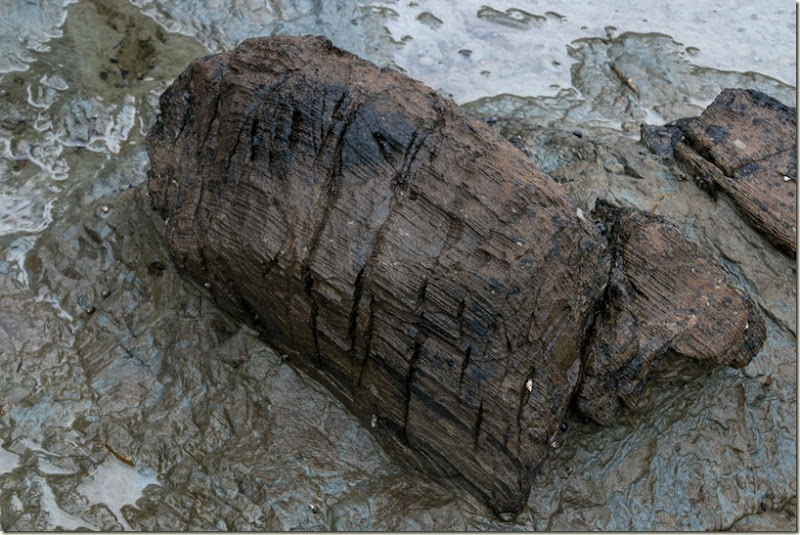 There were some unusual rocks with cross hatch cuts in them surrounded by the otherwise smooth ledge. 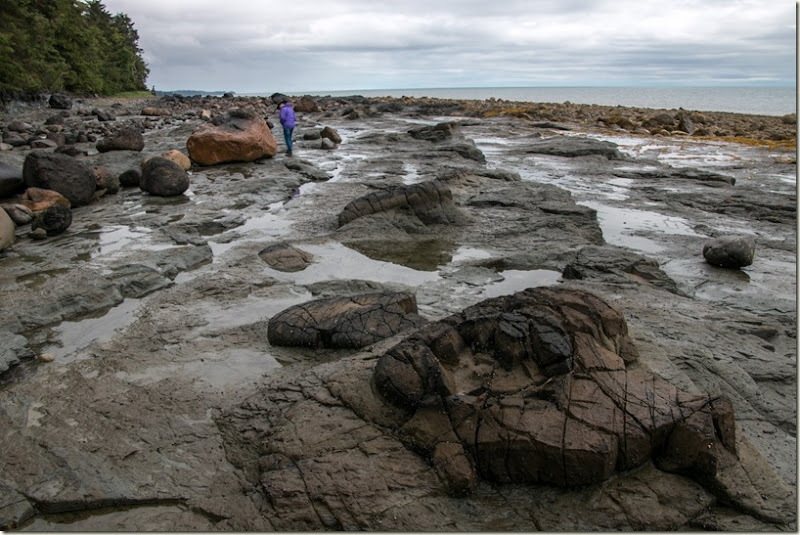 And this bright copper coloured boulder. Just a bit farther north next to the highway was Jungle Beach. I have no idea where the name came from.

Right at the entrance from the parking lot, someone has turned this old stump into a an interesting viewing platform. 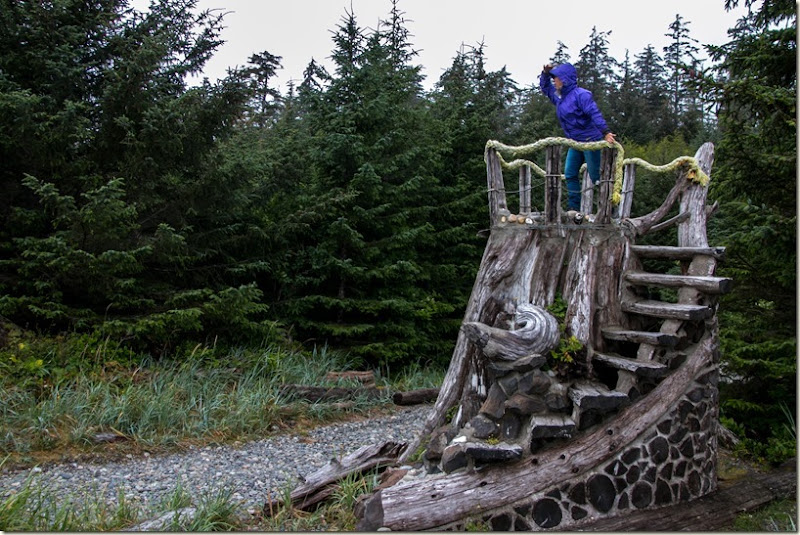 And carved a seal head into the curved section. 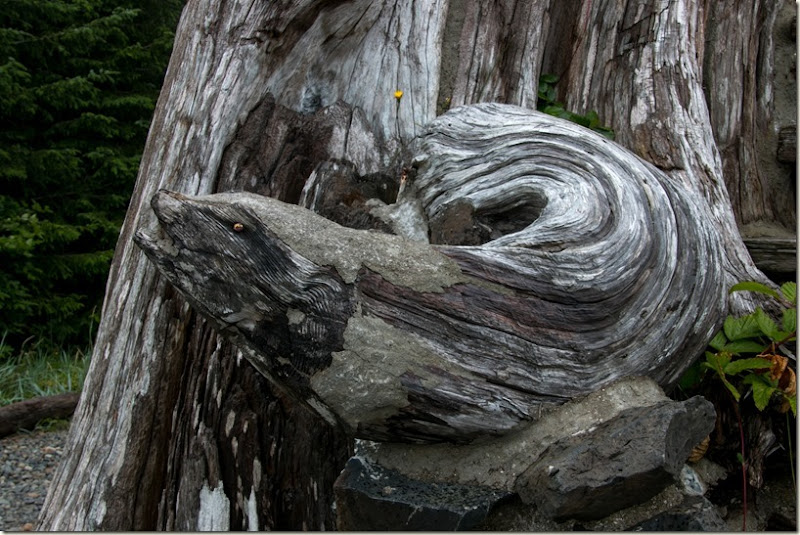 It looks like a great beach to take a long walk on. Smooth sand in either direction. Someone even drove their truck out the path and then headed up the beach. 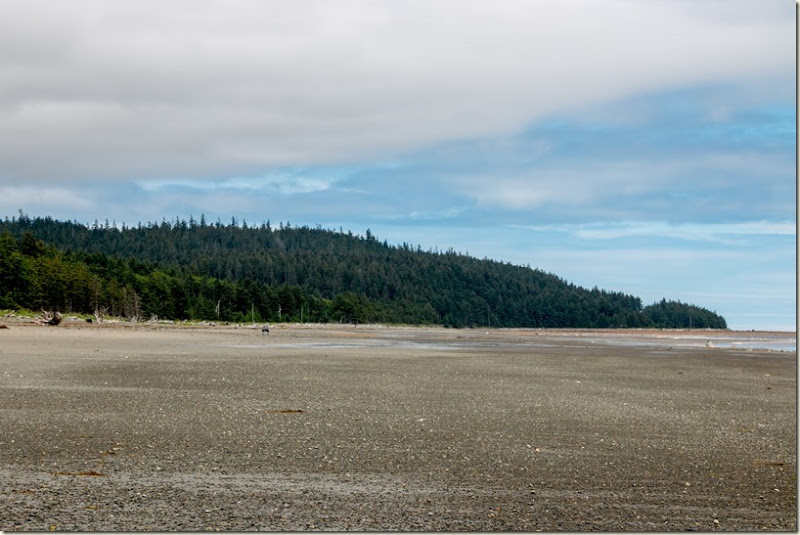 Since it was low tide there were some sea weed covered rocks right in front of us so we went down to investigate. 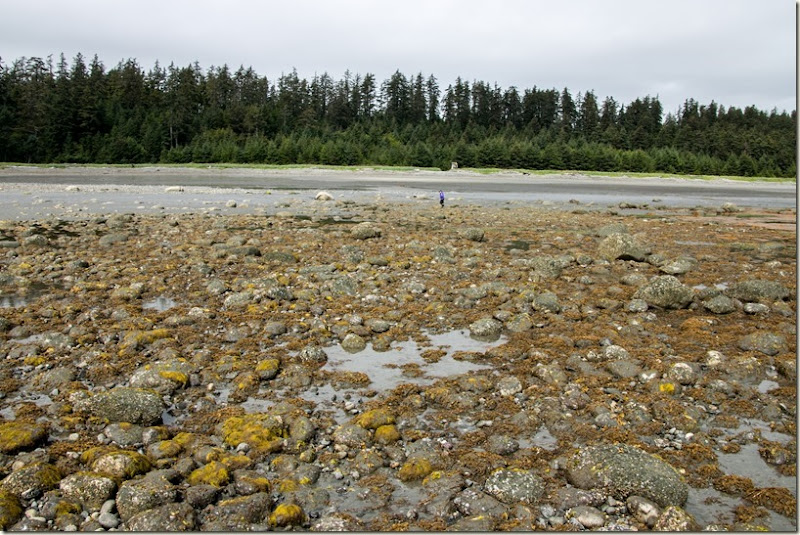 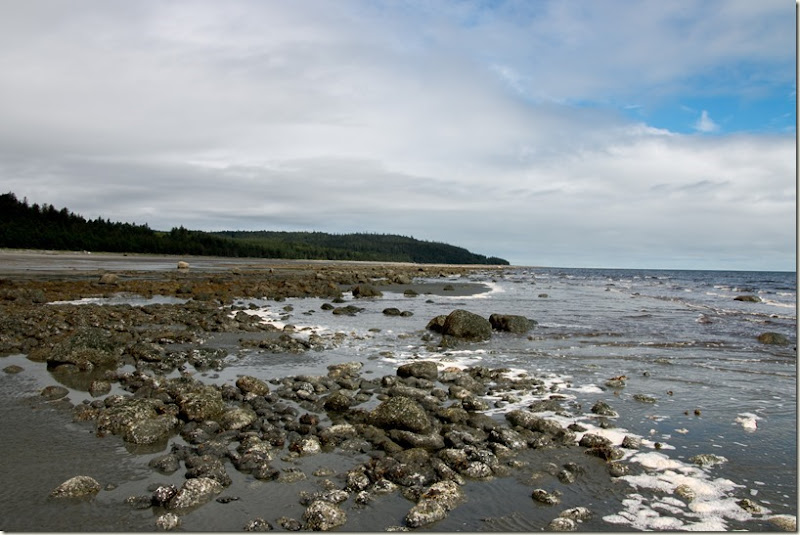 There was not a huge amount to see. 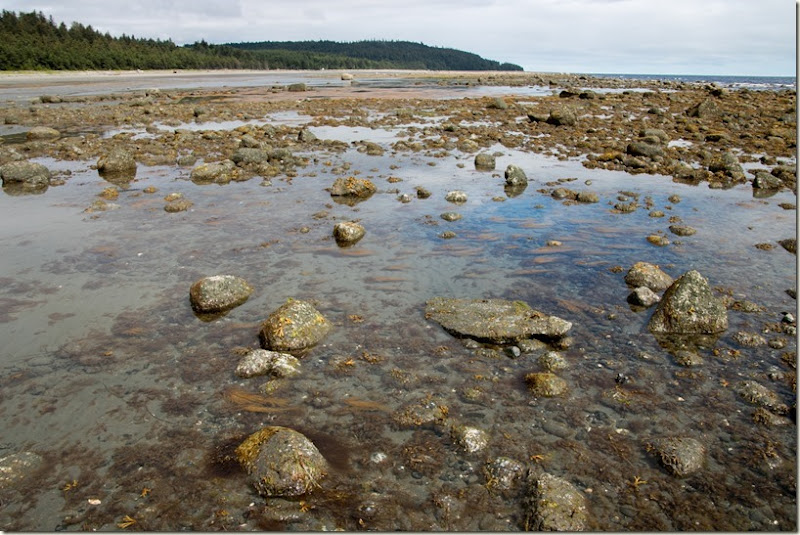 Lots of crabs. Most were hiding in the sand and you could just see the top of their shells. I disturbed this one and he reared up before digging himself back down. 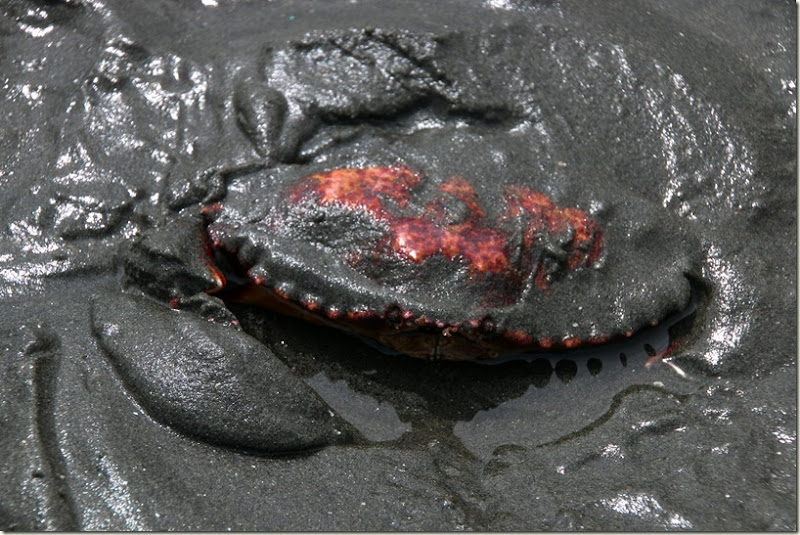 It looks like this one just lost a claw but he was still in a fighting mood. 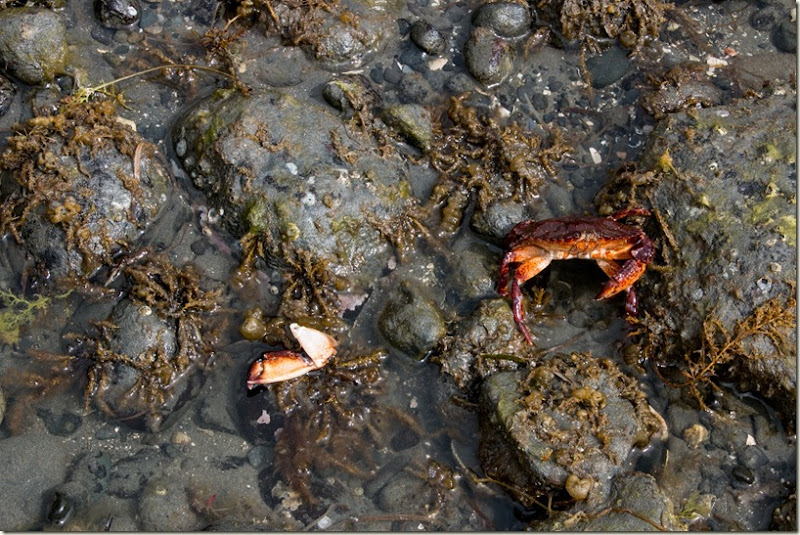 At first we landlubbers couldn’t figure what caused these tracks but then we saw the crabs shuffling sideways. 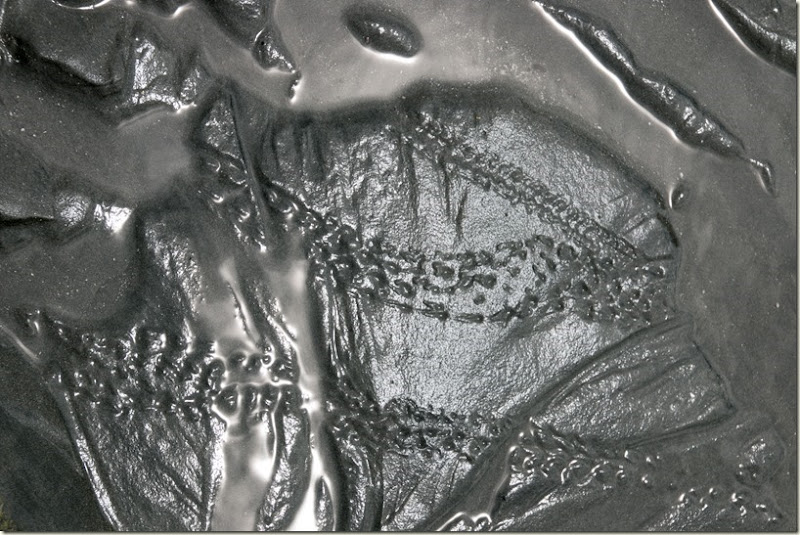 This feisty little guy was only about 2 inched wide but he got caught out in the open. 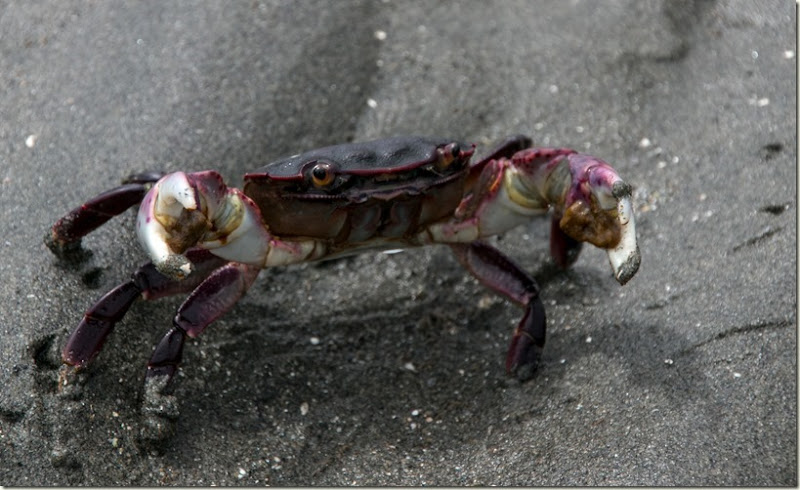 When I walked around behind him he reared up so much that he almost fell over backwards. 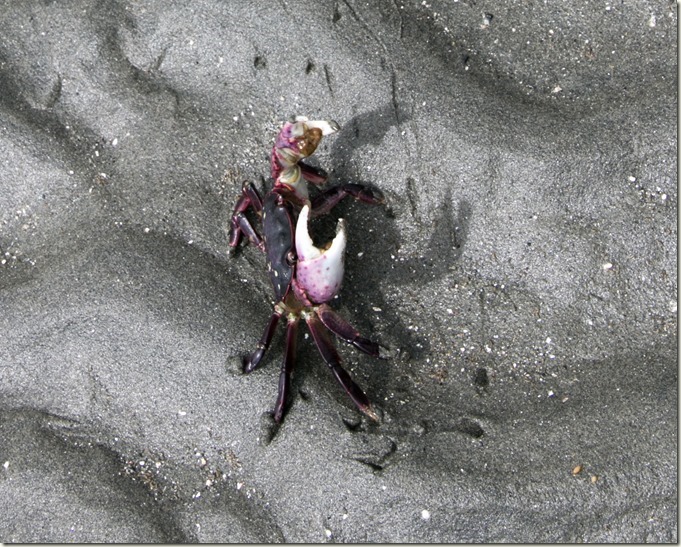 We found some interesting seaweed textures. 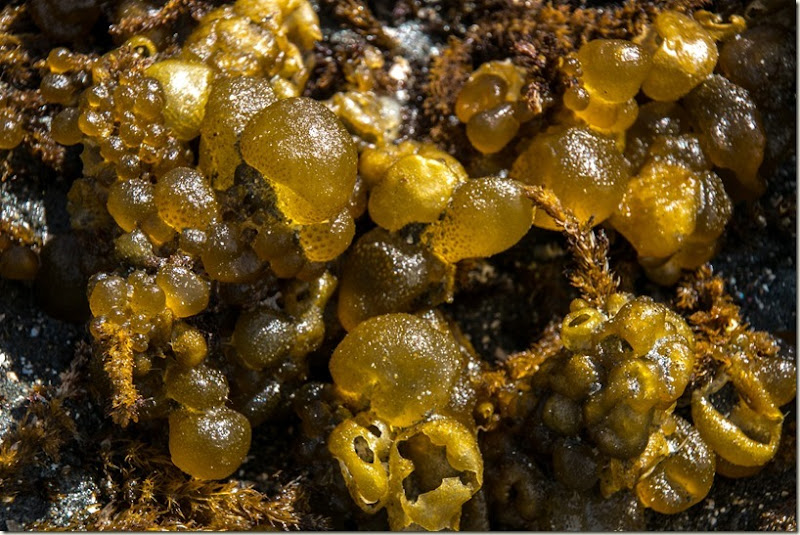 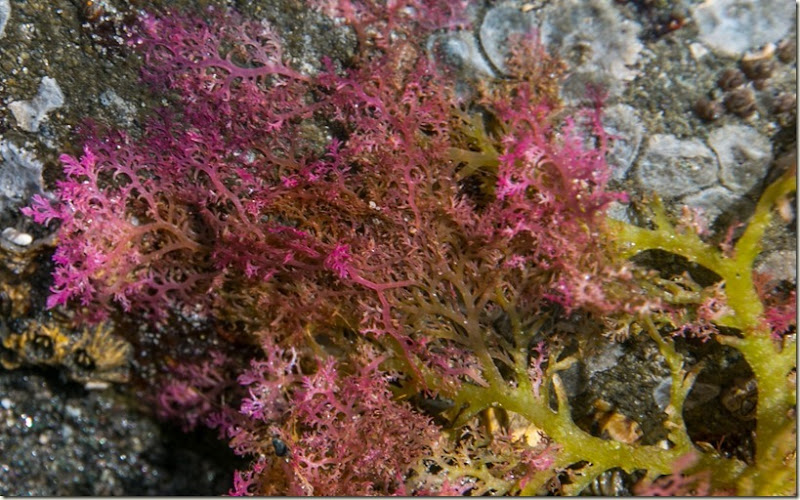 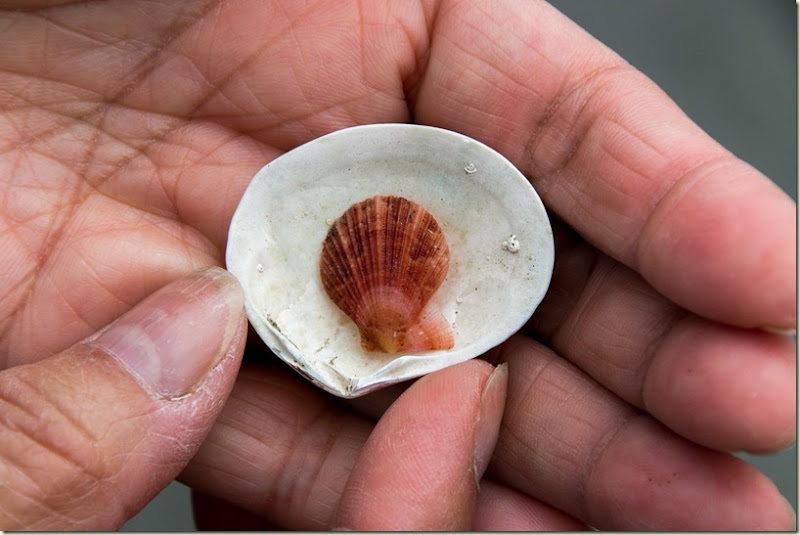 As the tide started coming in our walking area shrank. 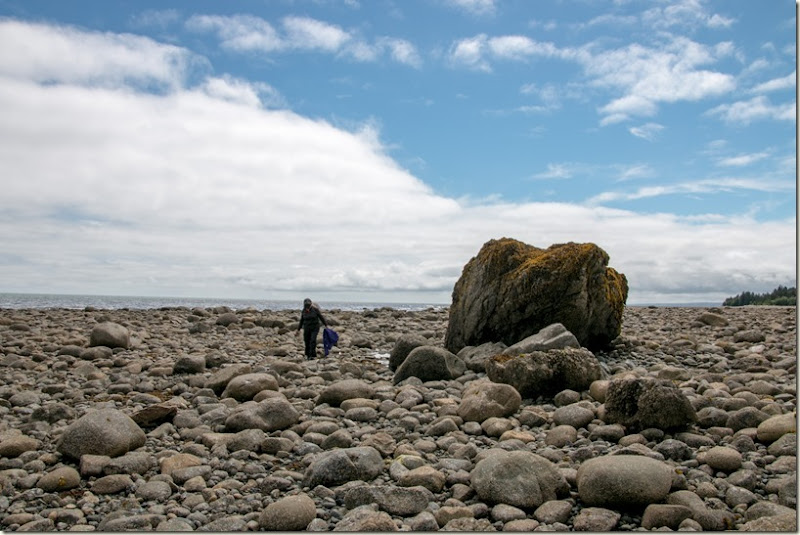 We drove up to Tlell to the Crows’ Nest Café for a late lunch of a huge sandwich and soup.

Driving back to Skidegate we could hardly keep awake. We checked into the B&B as early as we could and crashed into bed for a long nap.