It seems like this is the trip where we have all the problems with our vehicles. In every other year I think the worst we have had is a flat tire.

Let’s start with the CRV’s problem because it is shorter. After the first, short dirt road that we took near Port Hardy to Huson Cave, I had started to hear a rattling from under the car. It kept get worse and worse so today I took it to a Honda dealer in Nanaimo for a look before we start the long trip home. It turns out that a sway bar bushing is loose. They said that it should eventually be fixed but it is not a safety issue and we could wait until we get home.

The motorhome is a longer story.

About half way along the way out from Toronto in April the check engine light had come on. Since we were nowhere near anywhere that could look at it, I recorded the code and cleared it. I looked the code up online and it said that there might be a problem with a vacuum line but that it wasn’t really bad for the engine to keep going. The check engine light kept coming back once every day or two.

I also noticed that the engine was idling really slowly and roughly. Worse, when cruising down the road at a constant speed I got a really big vibration in the steering wheel. If I accelerated at all or let off on the gas it would go away.

Since we were getting close to our destination I thought I would wait until we got to Victoria because, surely, there would be a place there that could look at it. Once there, I called up our road side assistance help line and they were as useless as usual. They could come up with no place to take it on Vancouver Island. They said to either go back to Port Angeles or to somewhere near Vancouver.

So I put up with it. In our entire time on the island the light has only come back on twice. At each of our stops I would call the local Ford dealer and see if the could handle a large RV. I even called some truck repair places but they would not take an RV. It turns out that I guess I forgot to call the Nanaimo dealer. I think I looked at the google earth view and didn’t think their bays were big enough.

While we were on our Gwaii Hanaas trip, I told our tale to our new friend William. He said that he had a friend that had an RV and he would ask them where they took it. When he got home, the friend said that we should try the Nanaimo Ford dealer.  I called them up and sure enough, “No problem, Bring it in.”

Since I was going to stop in Nanaimo overnight before we took the ferry back to the mainland, I just added another night to our stay to take the RV in.

It surprised me, looking at the map, how far back down the island it is to Nanaimo. 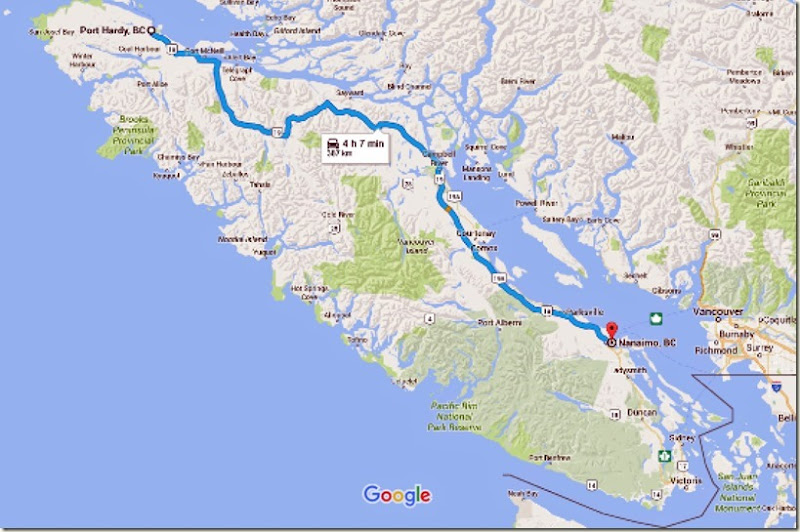 So I booked two nights at the Living Forest RV campground, which is near the ferry terminal and not too far from the dealer. It is a huge place with over 300 sites. Most of the sites are quite large but the roads are really narrow. 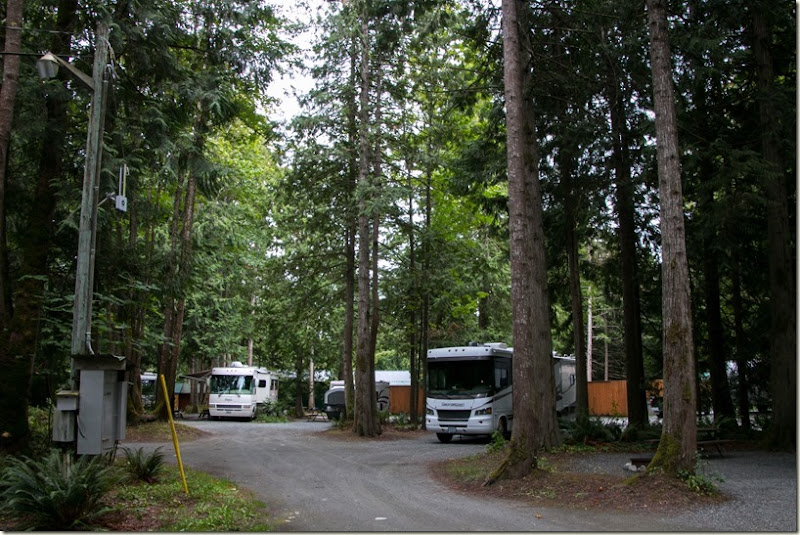 I hope I never meet another big RV coming the other way because they are two way roads. 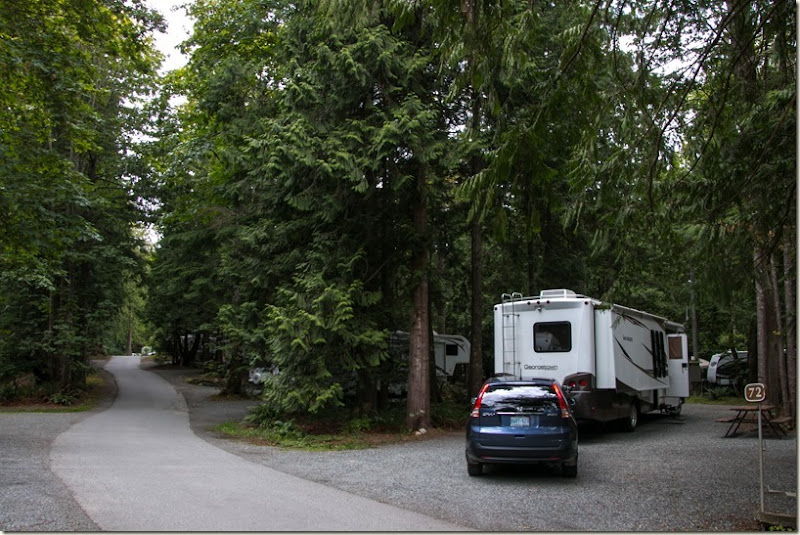 After we arrived at the dealer for our 10:30 am appointment, I dropped Jennie off at a mall and then came back to wait. And wait. They finally started looking at the RV around 1pm.

My assessment of the place from Google Earth was somewhat correct because none of their bays are big enough. He just parked the RV up against the door and worked on it outside. I have no idea why none of the other dealers couldn’t do that as well.

It didn’t take him very long to discover that it was not a vacuum problem but that the fuel injector on cylinder 7 was not working. So the engine has only been running on 9 of its 10 cylinders. That would certainly explain the rough idle and the vibration. I had been really worried that the vibration had been a transmission problem.

Unfortunately they didn’t have the replacement part in stock. They had to order it from Edmonton but it would arrive tomorrow morning. So I quickly called up the RV park and booked another night. It is a different site but since we take everything with us to the dealer it doesn’t matter.

We left the RV at the Ford dealer and went to the nearby Honda dealer. We were only there about 1/2 an hour. Then we went back and hooked up the car to the RV to go back to the campground.

We will drop off the RV tomorrow morning and find something to do in Nanaimo while we wait.

As to the ferry, I had put off booking one until I knew how long the repair would take. I had checked availability, hoping we could go tomorrow, but the two morning ones were full. My choice would have been 5:15 am or 12:45 pm or later. I was not looking forward to getting up at 4 am to get be there the required 30 minutes early. Now that we have to wait until Thursday, the much more reasonable, 7:45 am ferry is available and now booked.

Fingers crossed that all is made well tomorrow.

For my family, with our slightly delayed departure, we should arrive at the cottage sometime late on Wednesday the 27th.