It was a perfect day weather-wise, with bright sunshine but just enough breeze to keep us cool.

I had read about Crisp Point Lighthouse in some brochures and some RV blogs.  They said it is hard to get to but worth the effort. It turned out to be right up there with the most picturesque lighthouses we have visited.

The hard part is that you need to drive on 18 miles of dirt road to get there. The first 10 are easy, wide and flat. 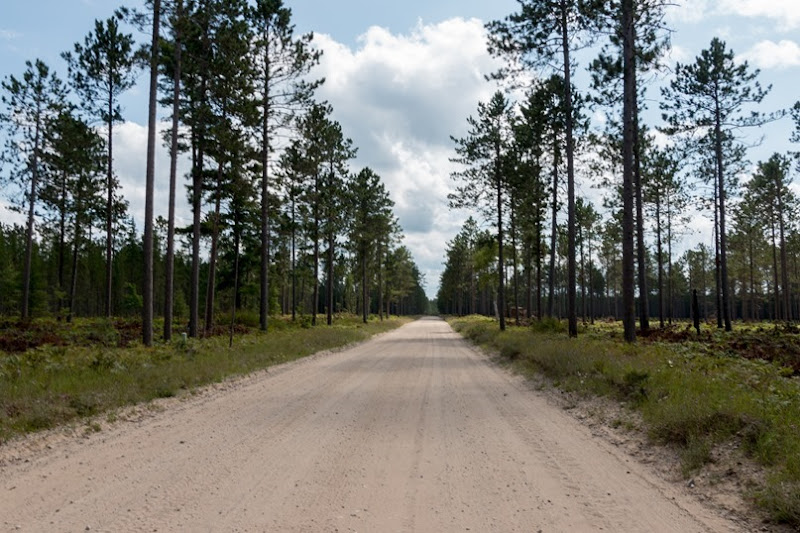 The last 8 are narrow, sometimes only a single car width, some soft sand sections and the worst is that part of it is used as a logging road.

We didn’t need 4wd but it sure felt nice to have it going through the long deep soft ruts. although on the way out we did see a Lincoln Town Car heading in. 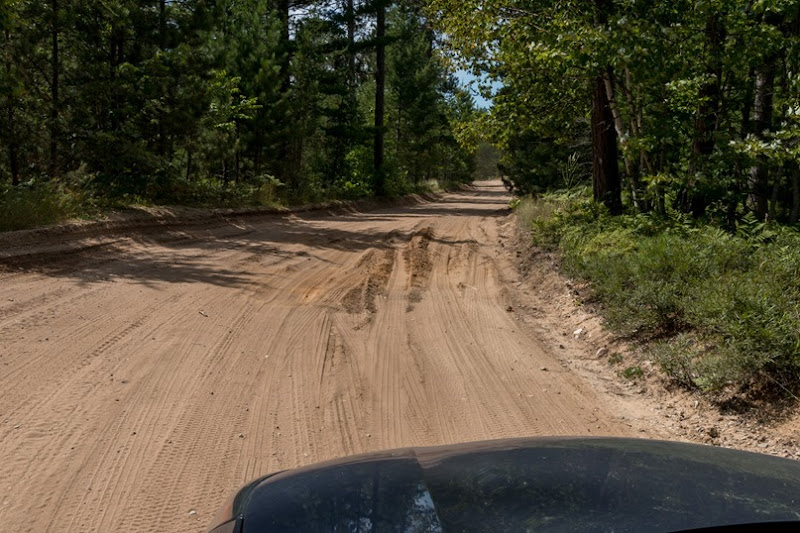 This is not the worst rut but there was no way I was stopping in those to take a picture.

The blind corners were the worst part. I did not want to meet a logging truck. 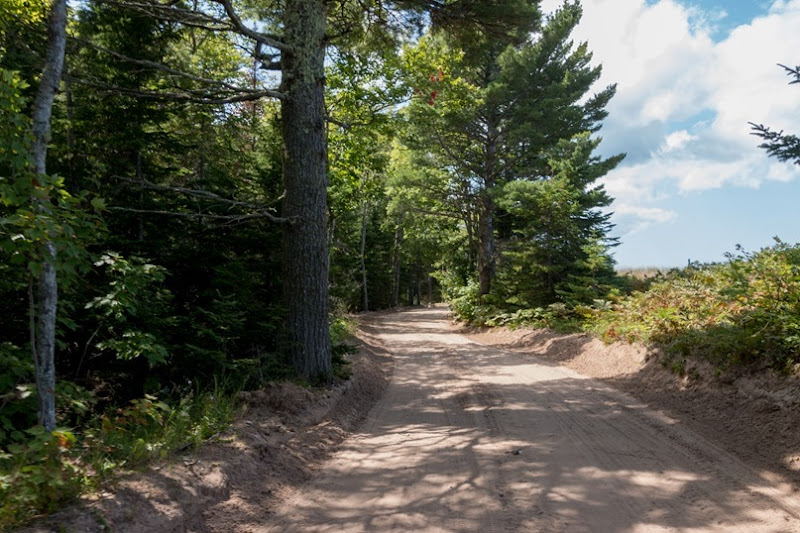 As we were driving there, we wondered how many people would actually make the trek. When we were getting close at around 11:00 and had not seen another car, we tried to guess how many cars would be in the parking lot. I said 2 and Jennie said 0. There were actually 2 but one belonged to the volunteer keeper so that doesn’t count. Another couple did arrive shortly after us. During our time there we were very surprised by the number of people that did show up.

Once we parked, we could easily tell where all the spider webs were on the back window. 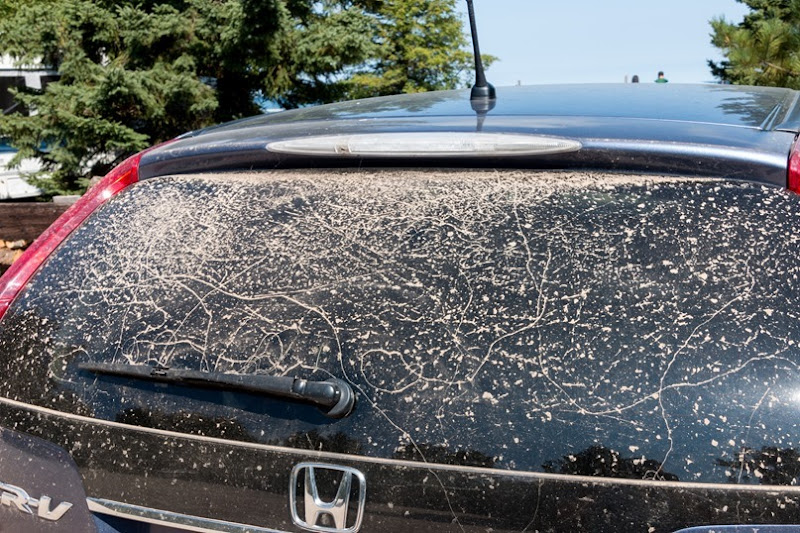 We also really didn’t know what to expect as far as facilities and the state of the lighthouse but we were blown away. Someone has spent a serious amount of money here. Everything was freshly painted with very new looking boardwalks everywhere. 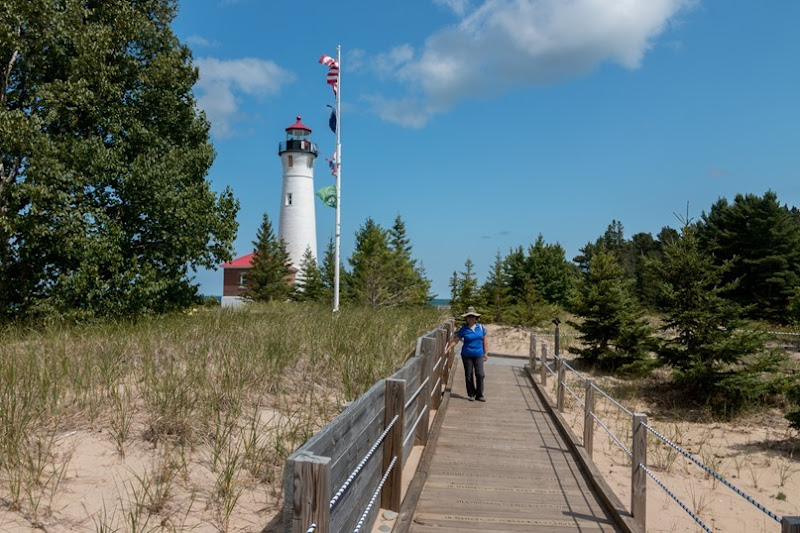 The volunteer keepers camp out here for 5 day stretches. The current ones had a pop up tent trailer. I don’t think you would want to take much more than that on the road but who knows. We have seen some pretty large RVs in some very remote locations in our travels.

There is no admission or climbing charge. They only ask for a donation. The volunteers stay at the visitor’s center / gift shop. The lighthouse itself is unattended and “climb at your own risk”. 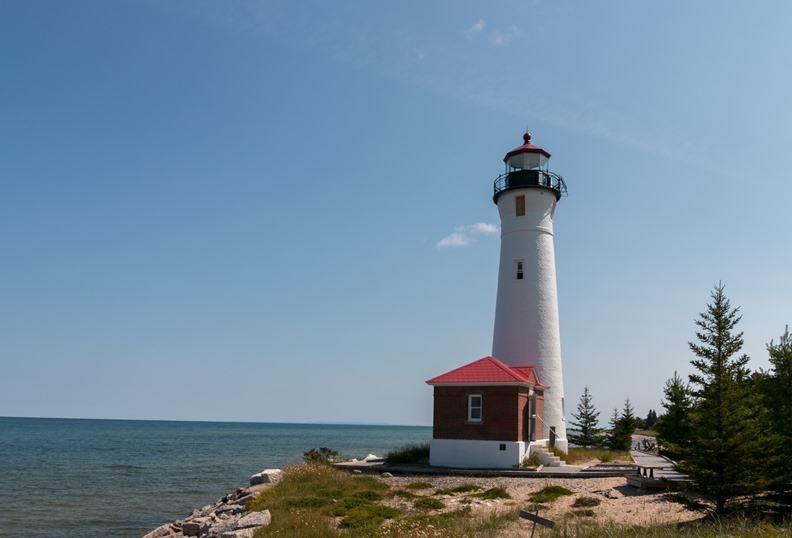 Since the other couple was on the beach we had the lighthouse to ourselves. Jennie decided she would give it a try since no one would be rushing her.

Up we go. One long spiral to a landing just below the deck. This part was not too bad. 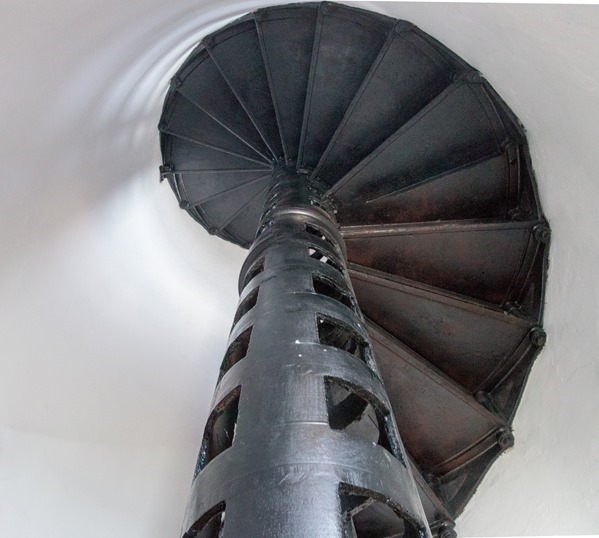 I think the hollow central column was used for the clock mechanism weights.

Then the hard part. A narrow, twisting, steep ladder, with no railing, up through a hole in the floor.

But she made it. 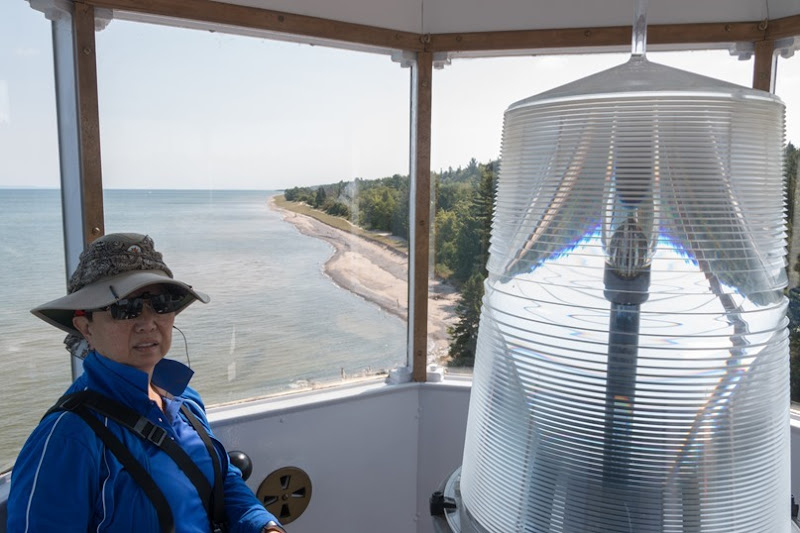 The light looks like it is a halogen bulb. (this vertical panorama is a bit disjointed) 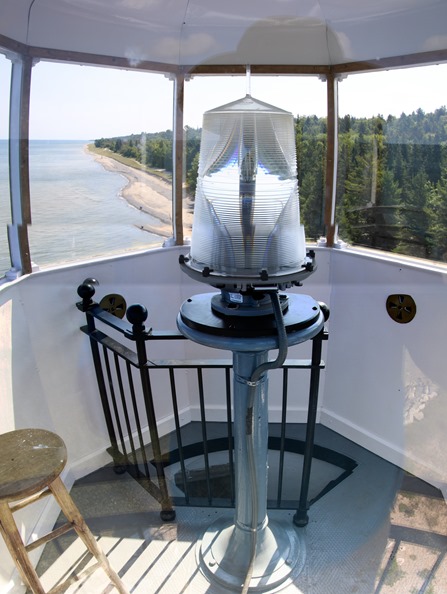 She didn’t want to stay long so we both went back down and I went back up again.

To get out on to the balcony you had to duck down through a hole in the wall. Once I was out there the railing did seem a bit low. 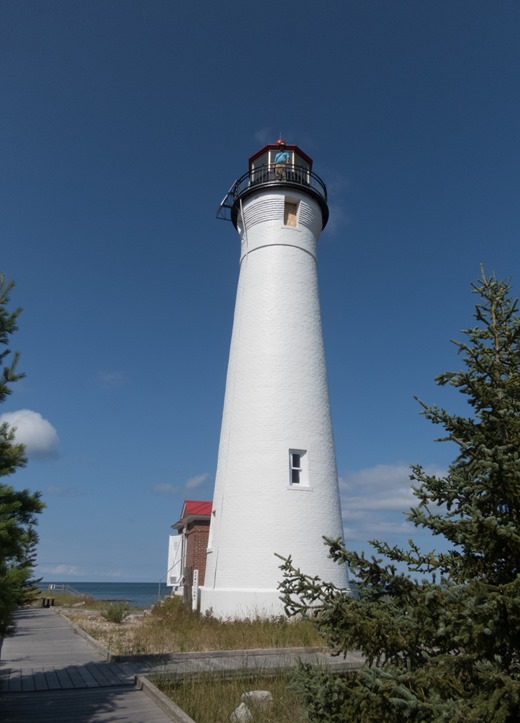 The view to the east. 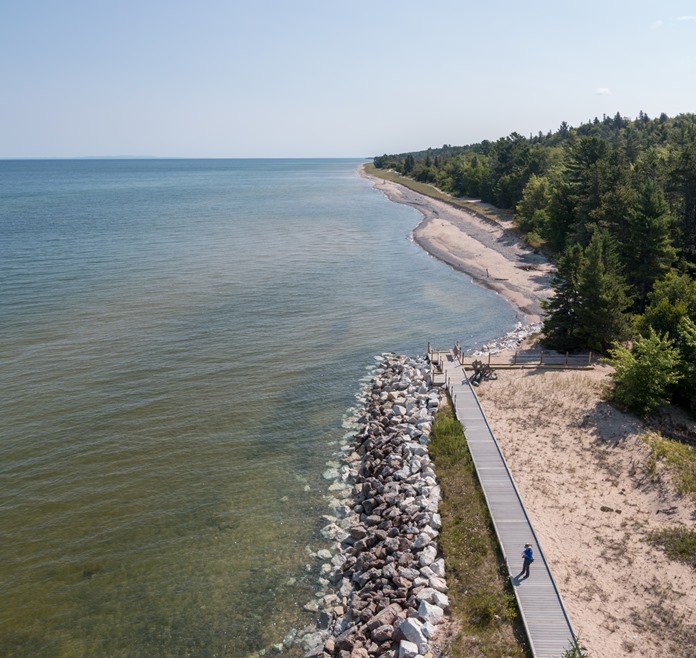 And a vertical panorama from straight down to the horizon. 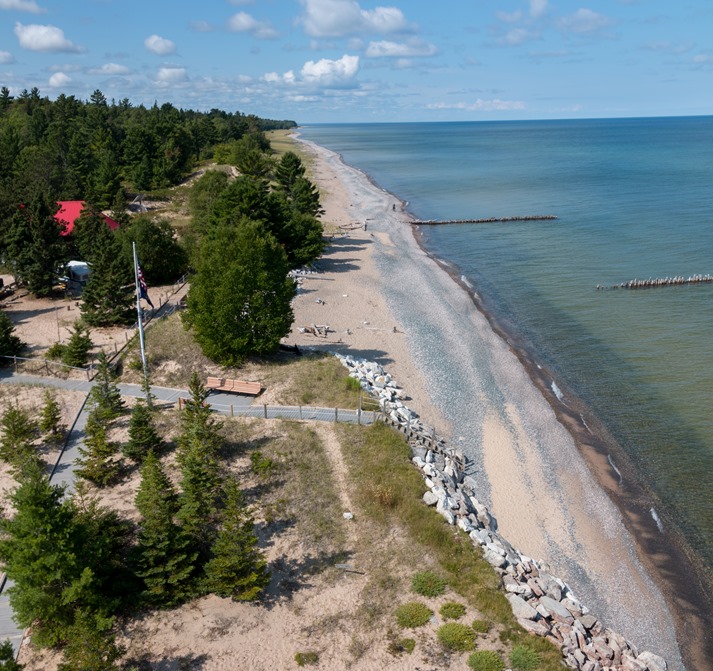 The photosphere standing on one spot on the railing.

The photosphere moving around the railing to remove the lighthouse from view.

Jennie went off to collect her rocks. 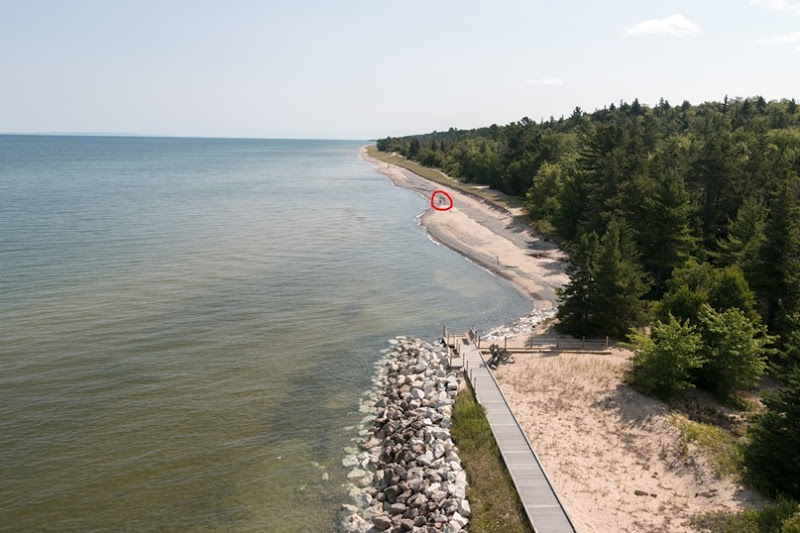 And I went after her. 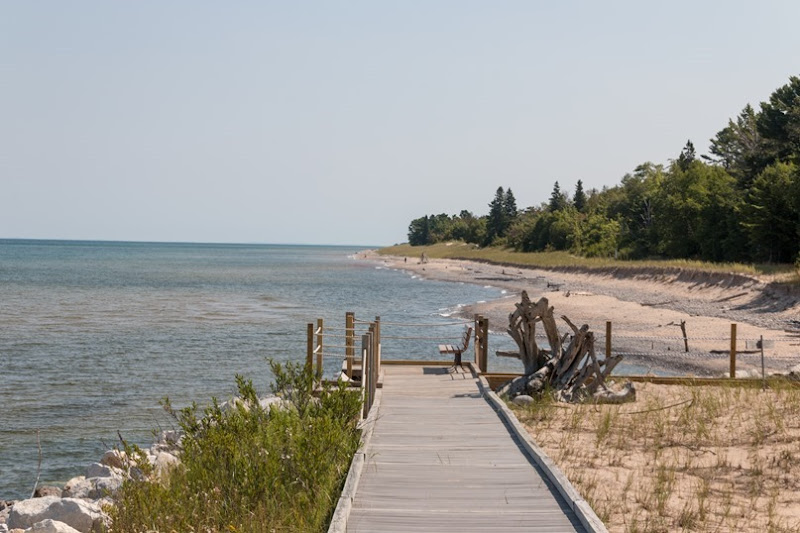 The thing that makes this lighthouse so picturesque is that it actually sit on land that juts out into the lake. Because of this it was once the most at risk lighthouse in the USA but now there is a huge rock breakwater protecting it. 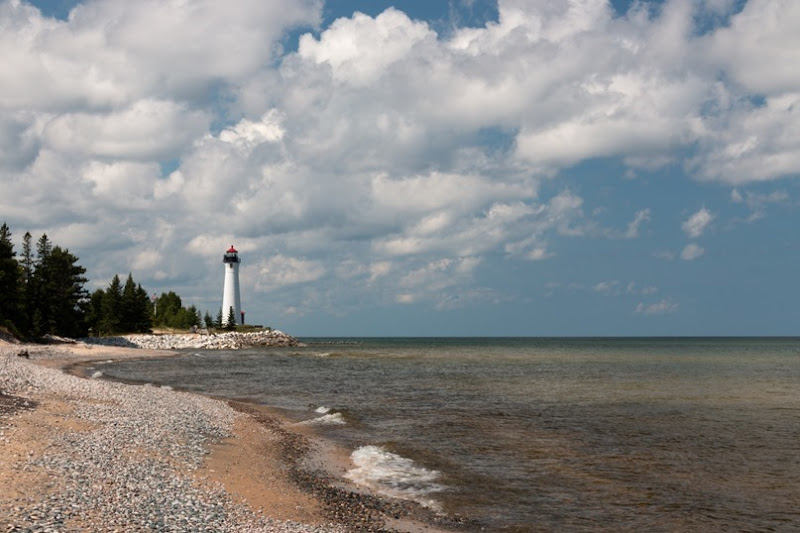 The pictures just don’t do it justice. I sat and stared for a long time. 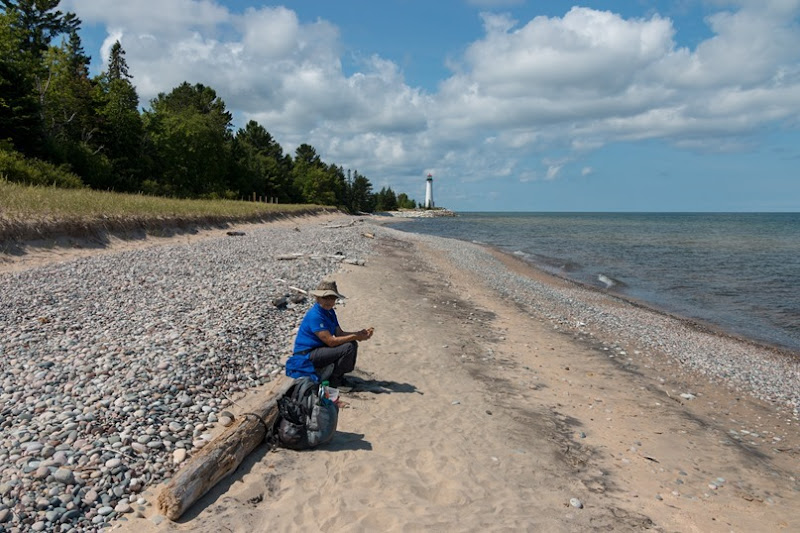 With a view to infinity. We loved all the different rock colours under the water near shore. 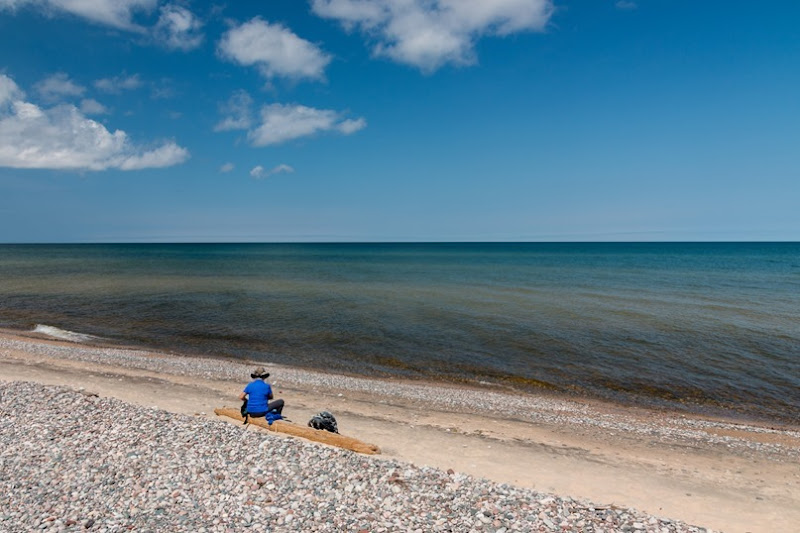 Eventually we headed back. 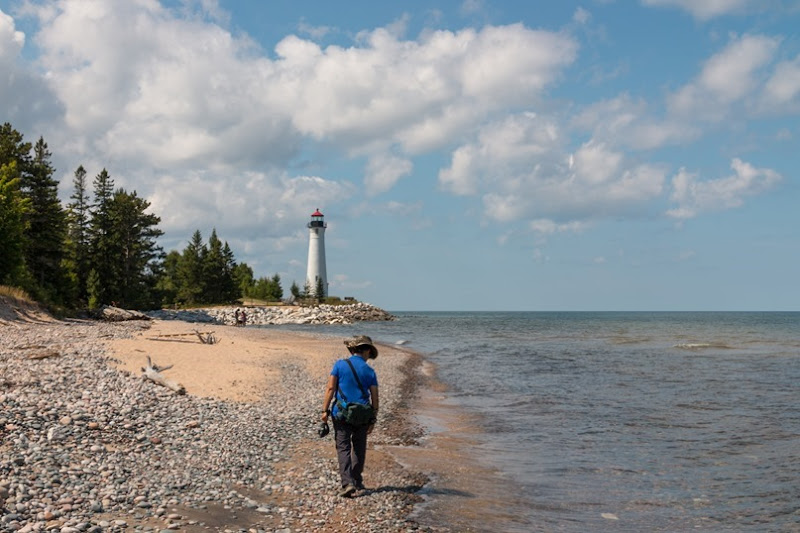 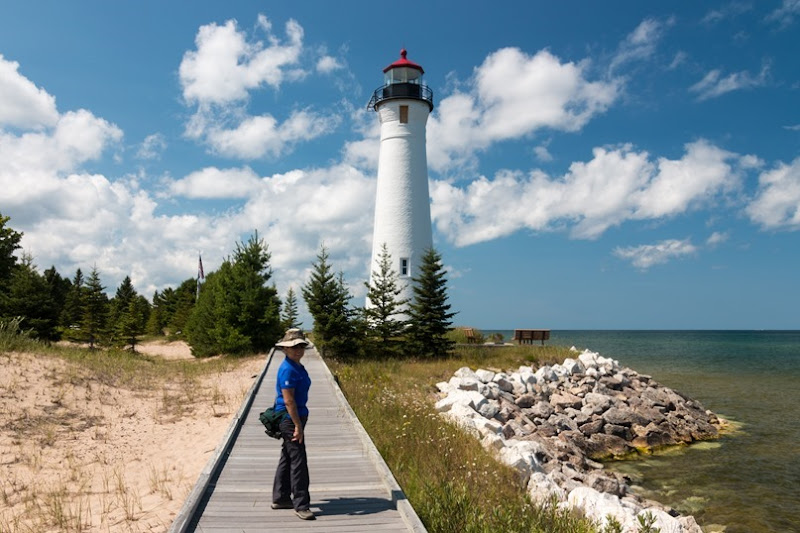 To the beach on the west side.

We never did see a lot of people up top. 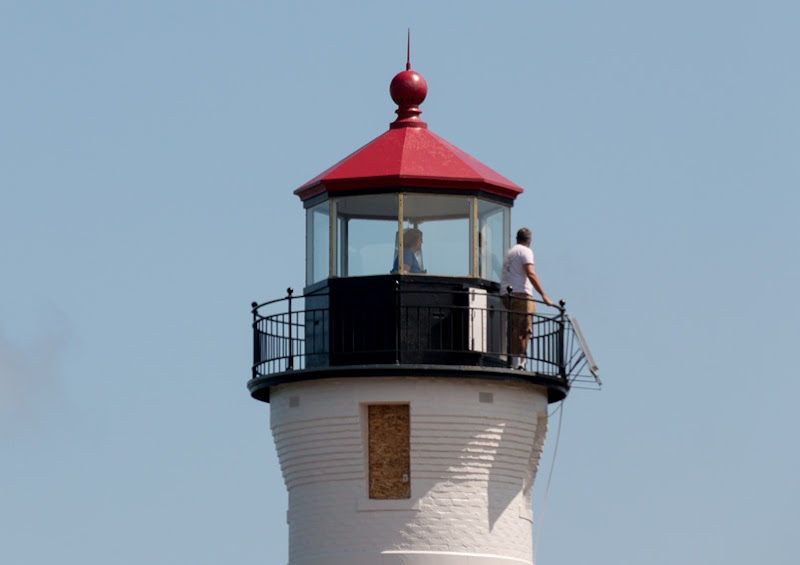 More rock collecting, with the lone freighter of the day far off on the horizon. 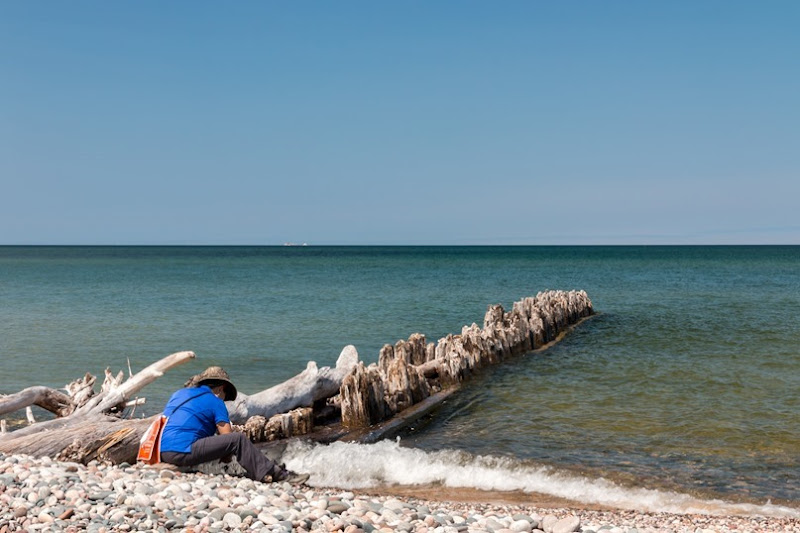 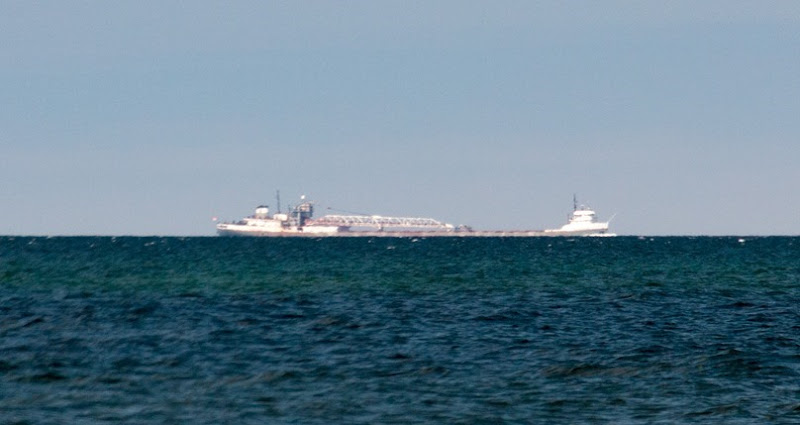 These people were serious agate hunters, with scoops, waders, a wet suit and shoulder bags 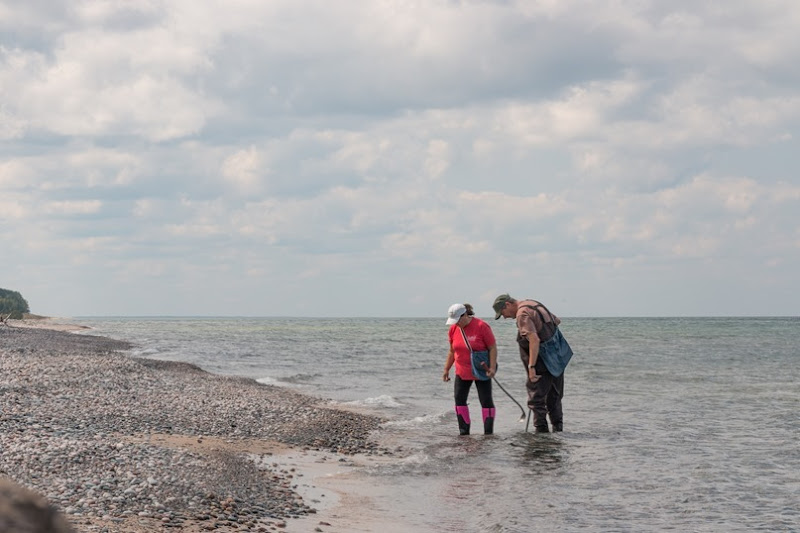 One more picture before we headed home just after 2:00 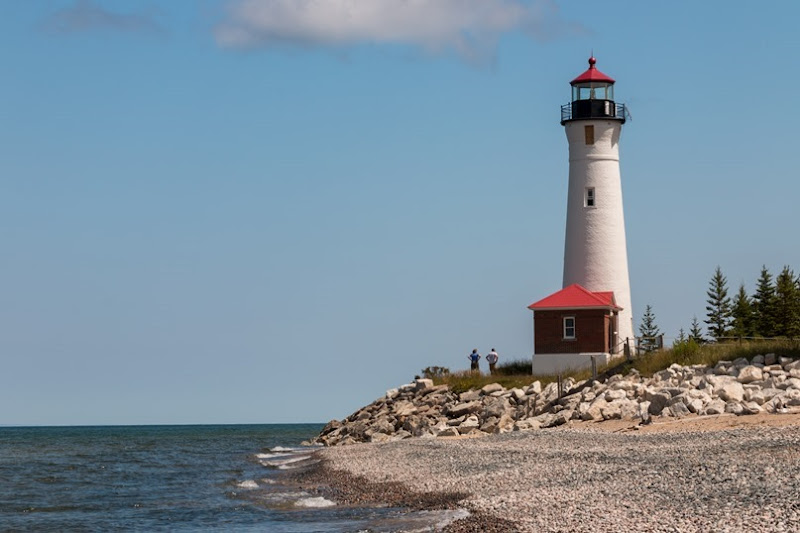