July 12 – Back to Portage Valley

We had no internet for a few days…

Instead of going to the Sealife Center on Tuesday we should have done the hike in the nice weather. It never stopped raining hard Tuesday night, all day Wednesday and this morning. We just stayed in yesterday, read and watched TV. 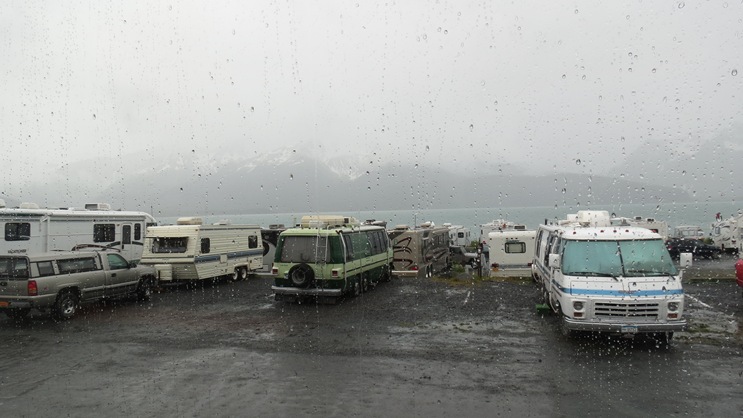 Today we drove back to the Williwaw Campground in the Portage Valley, where we had stayed when we visited Whittier. I wonder if it ever stops raining here. We tried to put the satellite dish up and it would get a signal for a few seconds and then lose it. It was so windy I was worried about it so we gave up and put it down. With the wind, the rain, the snow on the mountains and single digit Celsius temperatures it really did not feel like mid July. 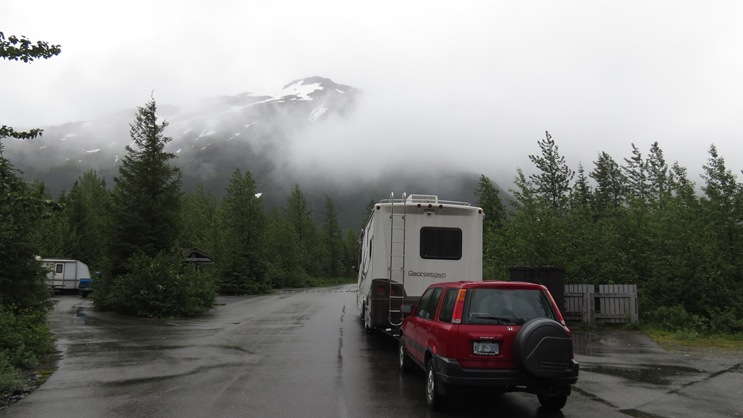 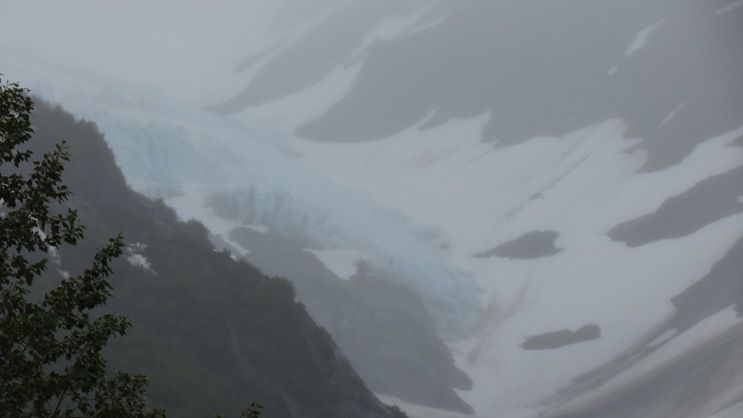 Just up the highway was the Alyeska Ski resort. We have a 2 for 1 coupon for their gondola. We decided to drive up there, more just to escape the weather we were in, to check it out. I didn’t expect to actually take the ride because we have been on a lot of ski lifts and with the low cloud there would not be much of a view. 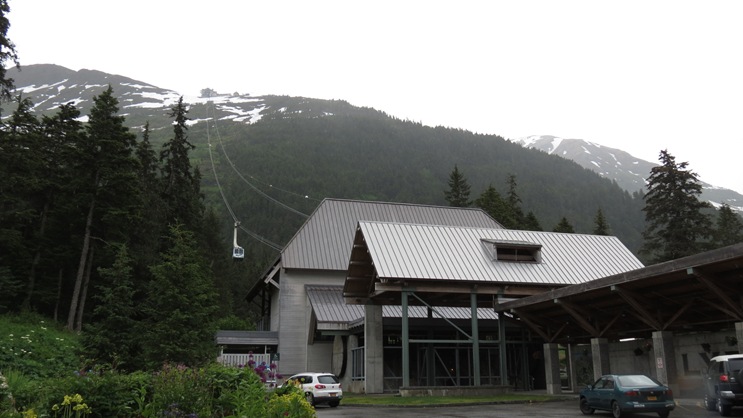 I had heard about an interesting hiking trail, called Winner Creek Trail, that started just behind the tram station. The scenery on the trail itself was nothing much but the destination made it worthwhile.  The trails goes 1.5 miles out to the creek and then 1 mile along it to where we wanted to go. The weather was also much better here. It was only sprinkling a bit and we even saw our shadows a few times. 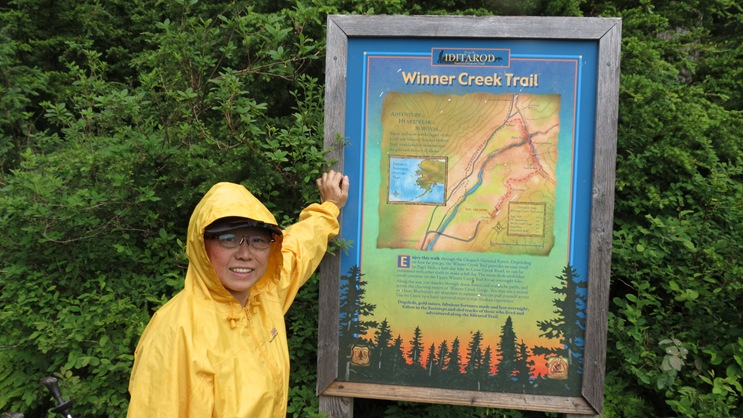 There is a large resort hotel here as well, so I guess a lot of people use the trail because it was very civilized. Anywhere that there was even a hint of water there were nice wide boardwalks. 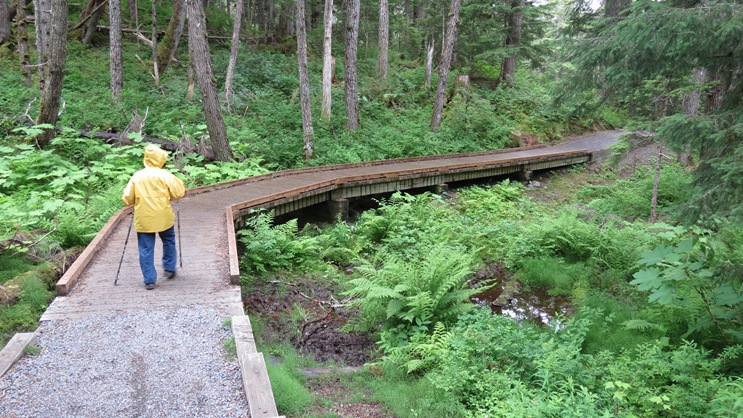 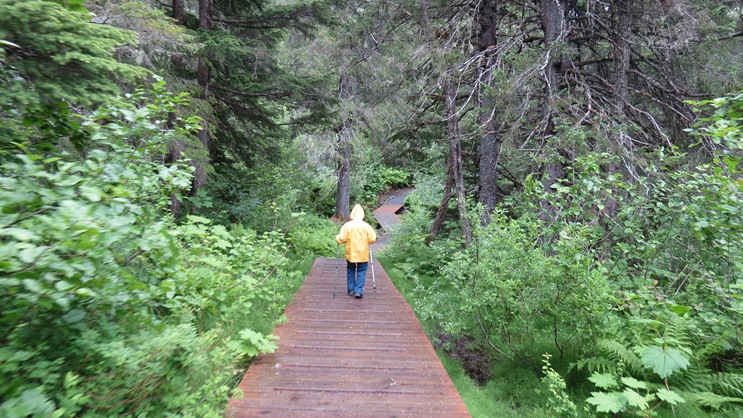 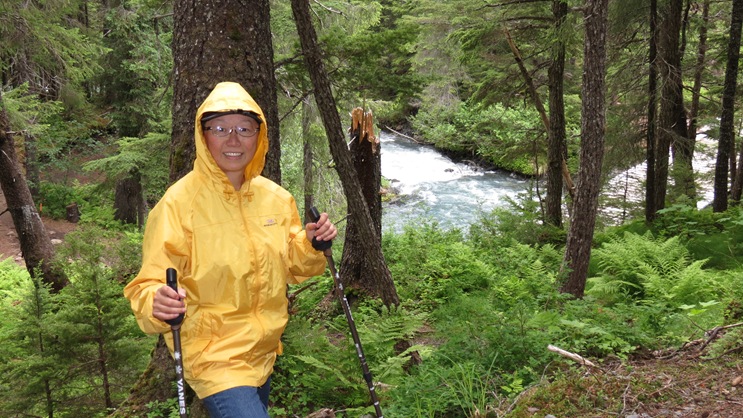 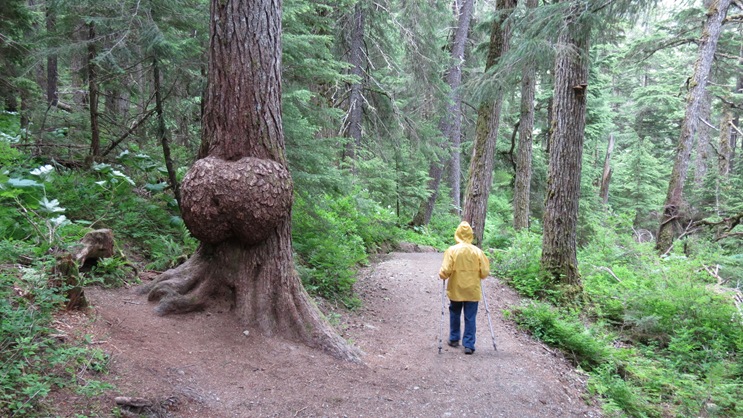 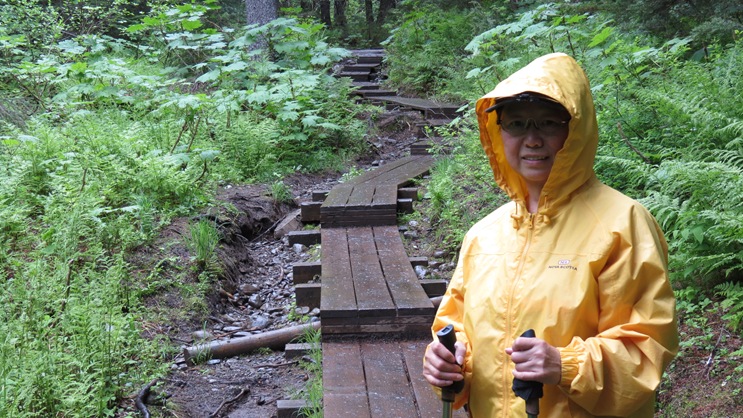 Once alongside the creek you walked along a trail cut into the hillside. We still couldn’t really see the creek itself. 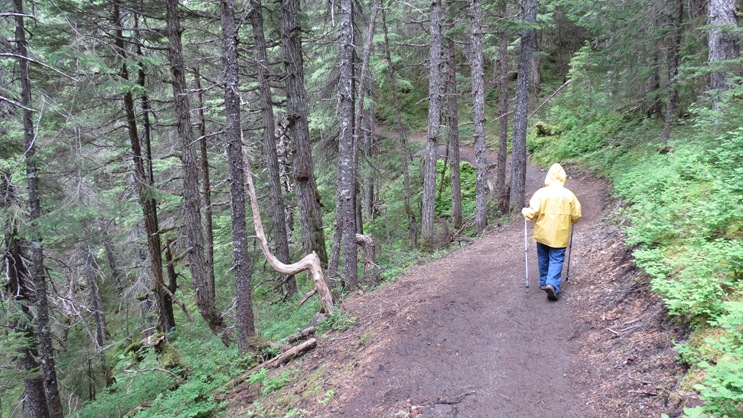 The creek splits to go around an island. We crossed the first branch on a small bridge over a nice gorge. 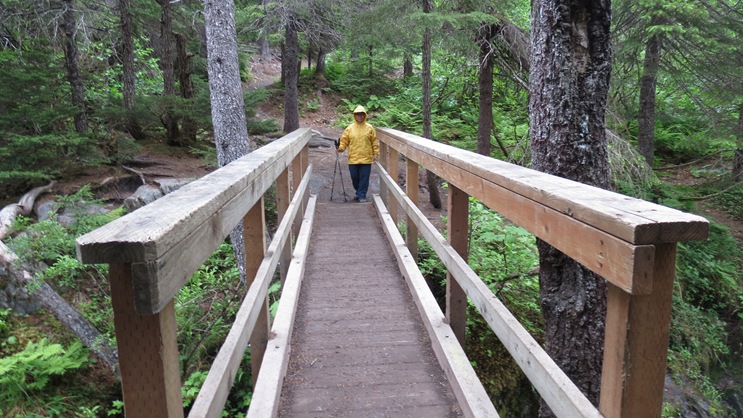 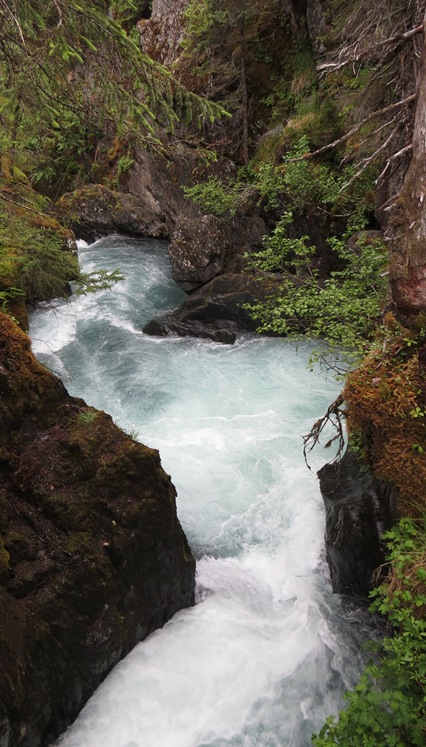 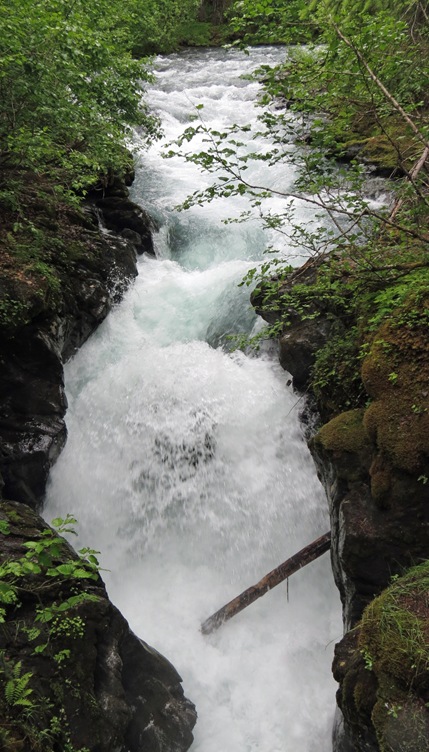 The real destination was the way you get across the second branch. A hand tram. 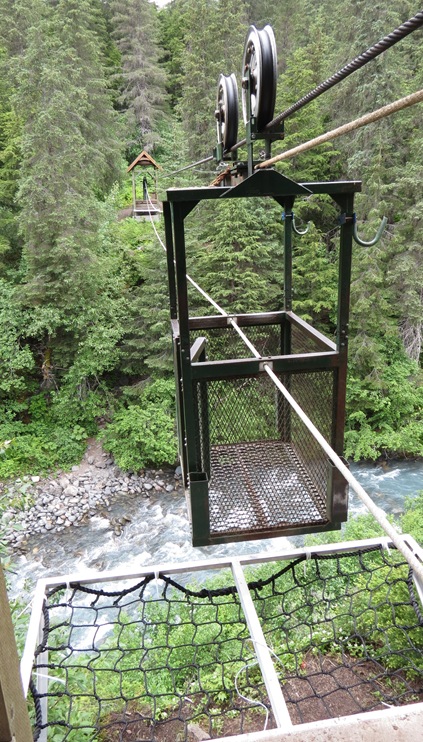 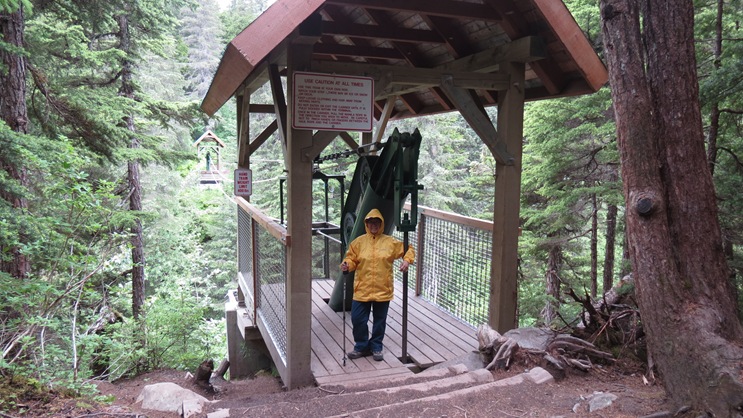 When we got there the tram was on the other side and I had to pull it over. 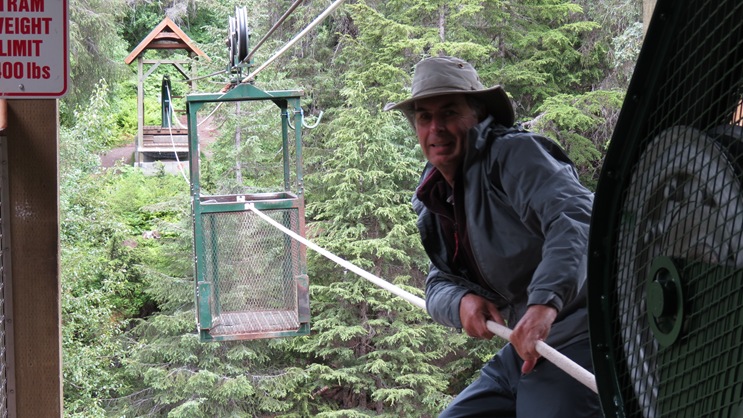 That was a lot of work. They say you should have two people to go across. One pulling from the tram and one pulling from one end. There was no way Jennie was going near this thing so I got in and only went a little way out so I could be sure I had enough energy to pull myself back. It was actually easier to move when you are in the tram. I am not sure why. 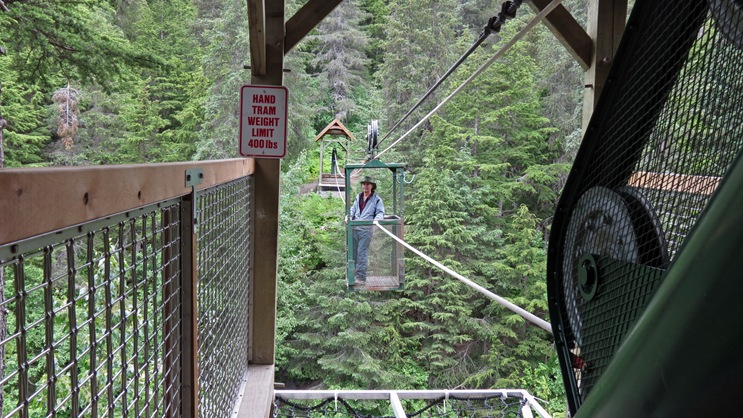 It was definitely not for the faint of heart. The walls and floor are just wire mesh and I would guess I was about 50 feet above the creek and of course it rocked side to side every time you pulled on the rope. 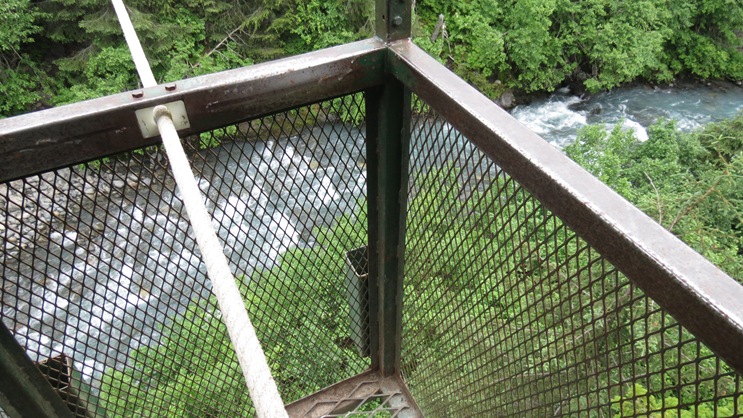 After a while some other people came and they did go all the way across. 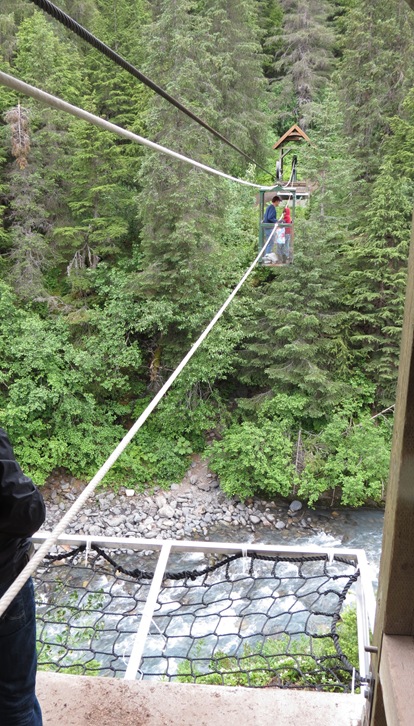 If you do go across, the trail makes a long loop back to the resort. Most people, us included,  just go out to try the tram and return the way they came.

We wandered around the resort hotel for a while but there wasn’t much of interest. 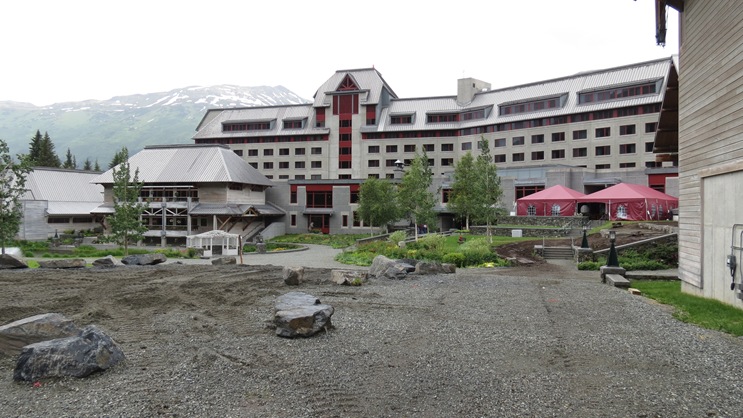 We headed back to the RV for a noisy night of wind and rain.