Last night the mosquitoes were so bad at the campground that even I wouldn’t go outside.  At least with our big front window I could pretend to be sitting by the stream side.

Today was bright and sunny but it was a bit hazy in the distance so the far away mountain views were not as good. 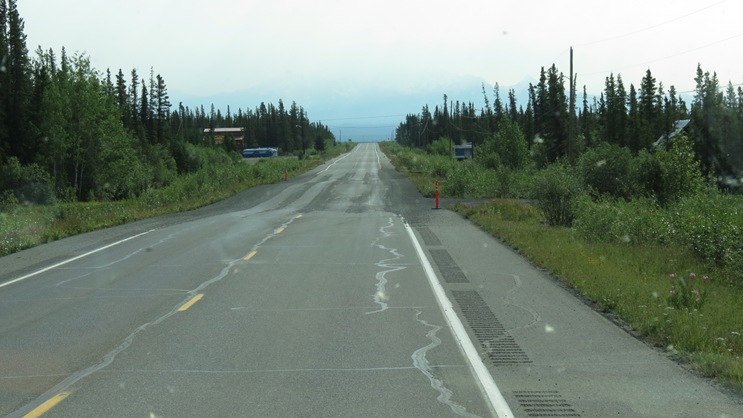 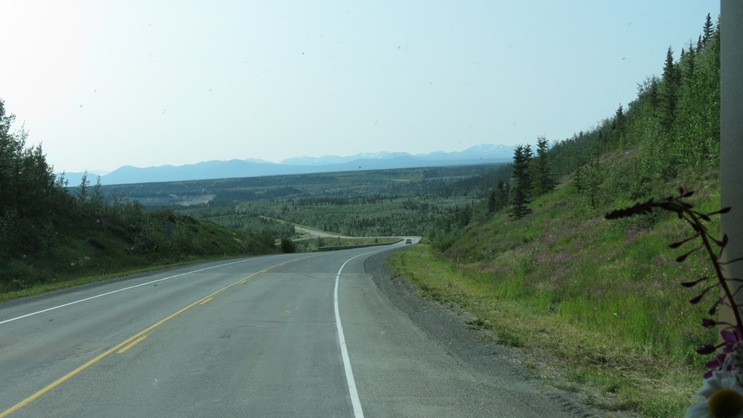 Part of the drive today bordered Wrangell St. Elias National Park. It is huge, larger than Switzerland. It was also only recently made into a national park and it still very undeveloped. There are only two dirt roads into the interior of the park. As a result it is one of the least visited parks. There were only 60,000 visitors last year. In contrast Denali had 800,000 and the most visited, Smokey Mountains, had 10 million.

We stopped at the park visitor’s center just off the highway just south of Glenallen. On the way back from Valdez we plan to take a day and drive in one of the access roads. It has a pretty bad reputation so we tried to get any info we could. Supposedly it is in better than normal shape. I hope it doesn’t rain too much until we get there. We also watched a movie about the park and walked to a viewpoint where are supposed to be able to see some of the mountains. The park has 9 of the 16 highest peaks in the US. Mount Wrangell and Mount Drum, each around 14000 feet high, were at least partly visible from here. 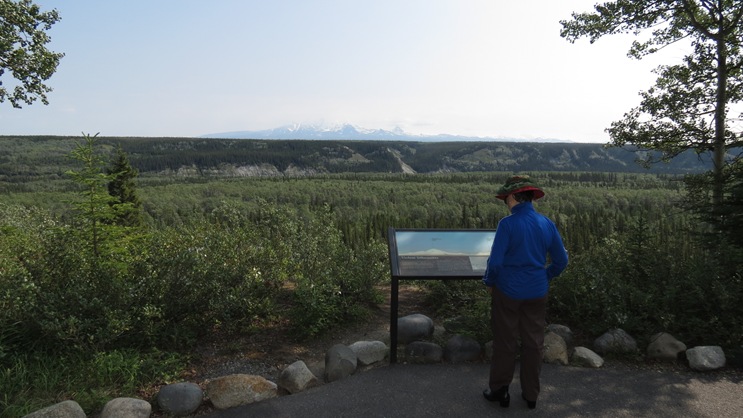 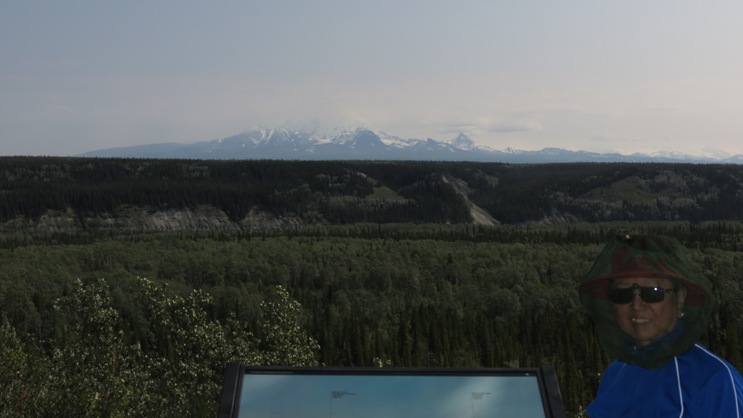 With the haze and high clouds we could only see the bottom halves. 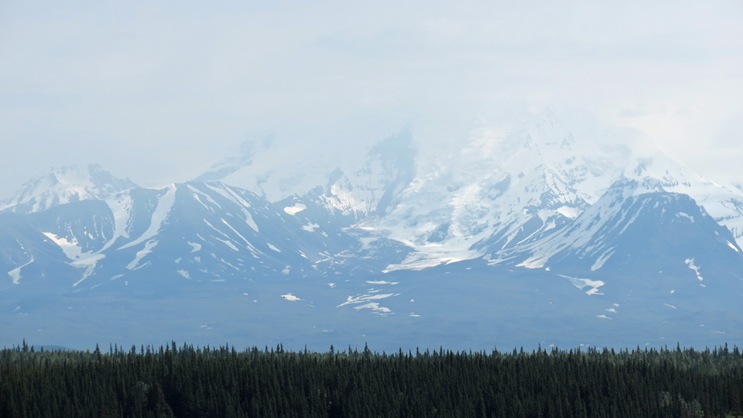 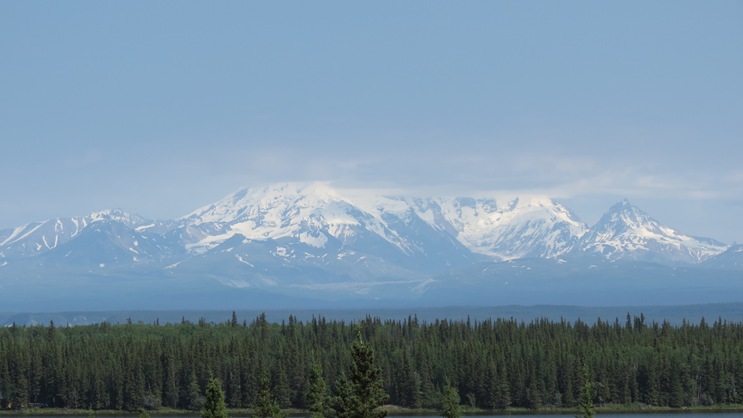 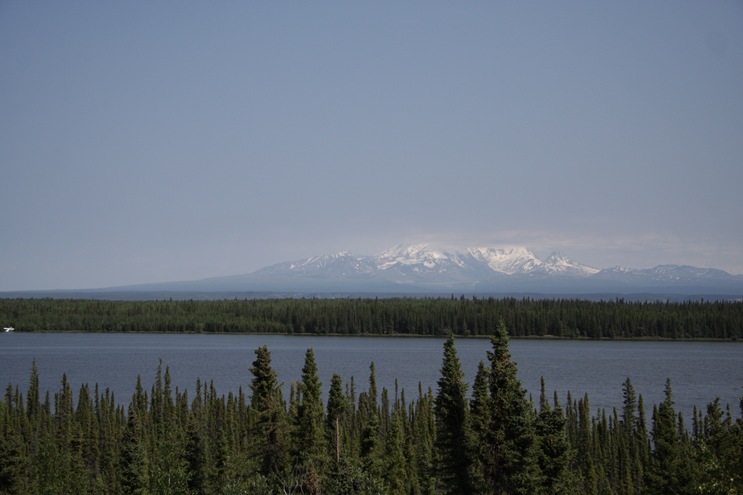 It was too bad because you could tell from the size of the bases they would be very impressive to see in their entirety. Hopefully on the way back we will see more but I don’t think we could get much better weather than this.

There are a lot of bugs around here. I had to clean the windshield at lunch but it was kind of pointless because it covered again in a very short time. I had to do a lot of touching up on the pictures we took while moving.

Initially the scenery near the highway was kind of flat and boring but as we got nearer to Valdez we got back into the mountains. 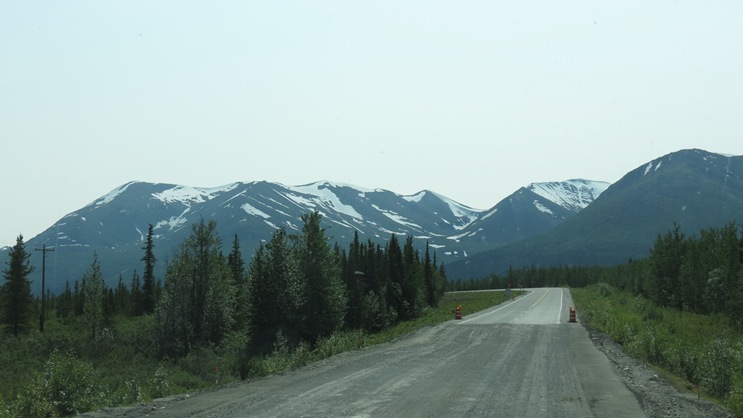 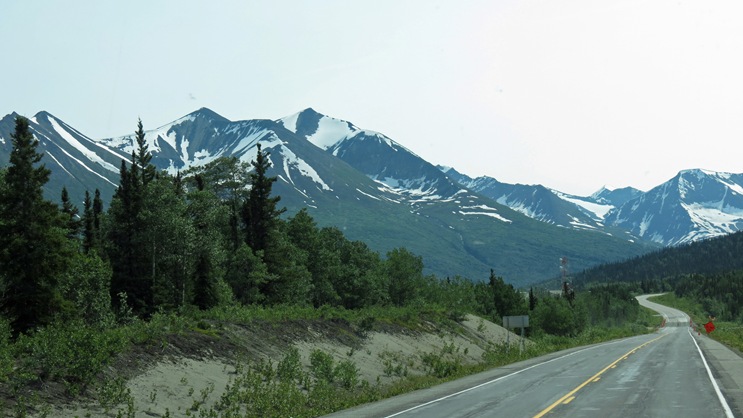 You can get some scale by looking for the tiny car in the picture below. 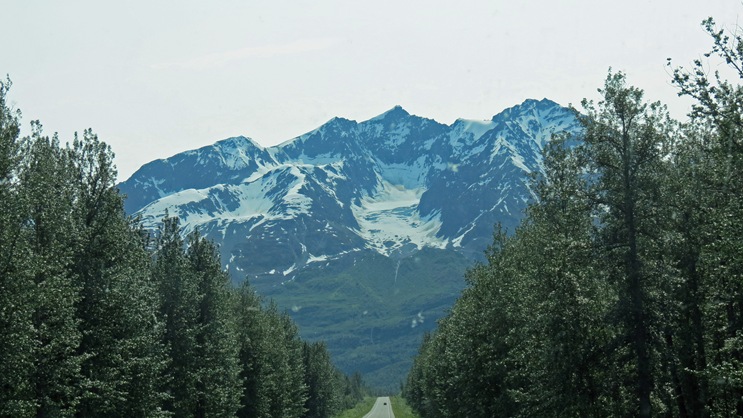 We got some great views of the Worthington Glacier as it is very close to the highway. There is a state recreation site here but it is close enough to Valdez that I think we will come back with the CRV rather than going in with the RV. 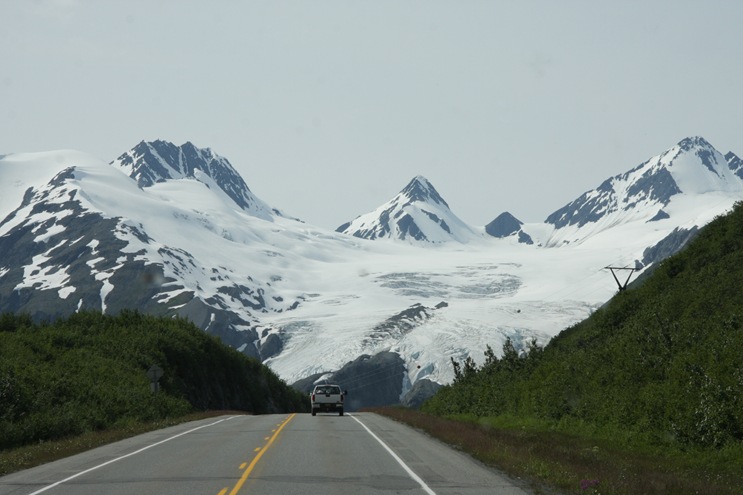 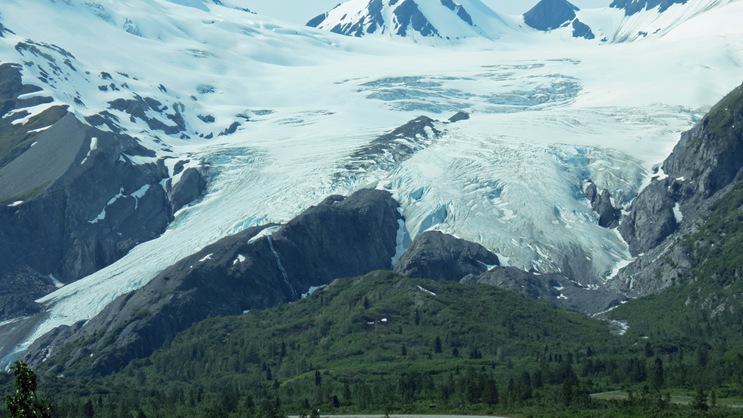 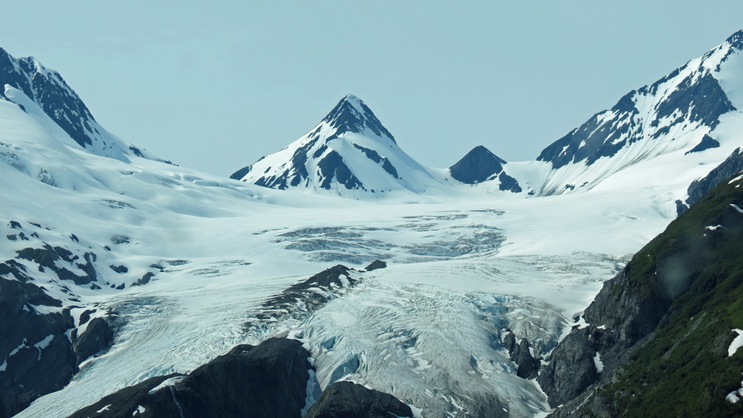 We climbed up to Thompson Pass. This is the snowiest place in Alaska. It averages 550 inches of snow a year. In 1955 it got over 5 feet in one day. I wonder what it was for this year because they said they set a record of 322 inches in Valdez itself. 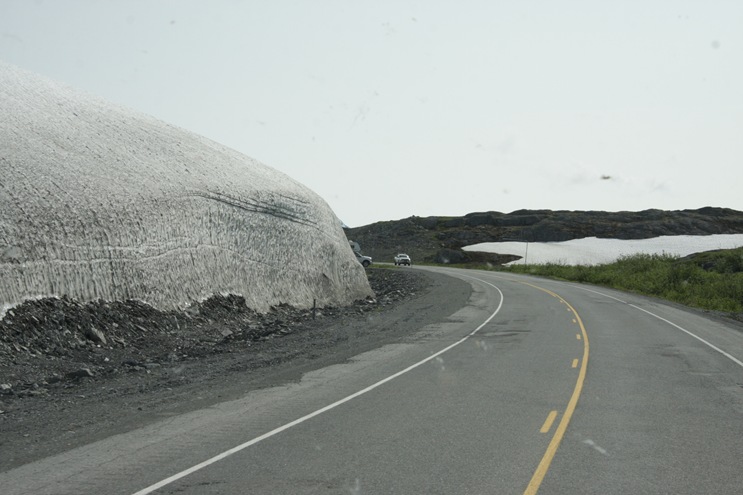 At the top we could see another glacier in the distance. 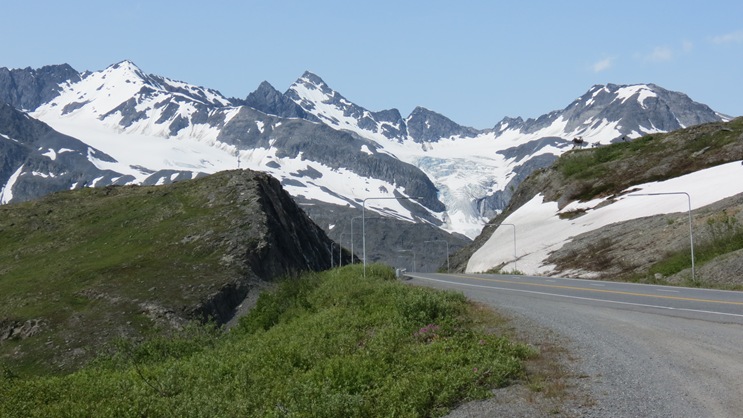 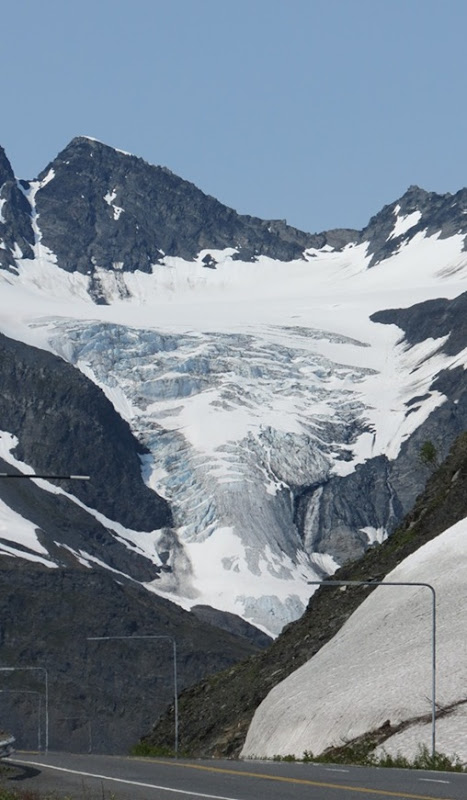 The angled poles tell the snow plow drivers where the edge of the road is when it is buried. 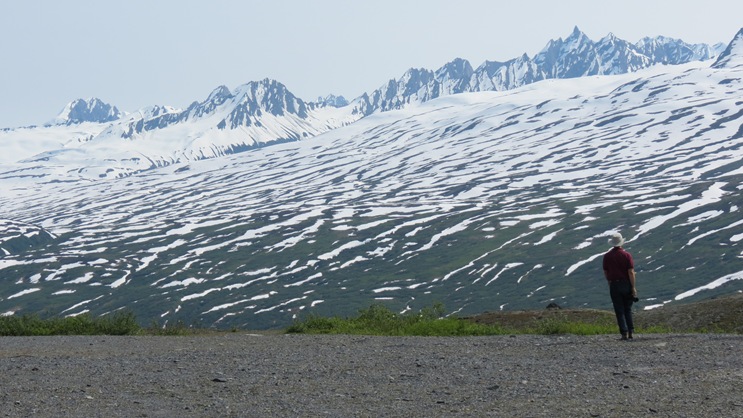 The pass is at 2800 feet and of course Valdez is at sea level. The road down was very steep and very long. The engine was screaming in a lower gear in order to save the brakes, which would have overheated. This will be a very long and slow climb for the RV on the way back. 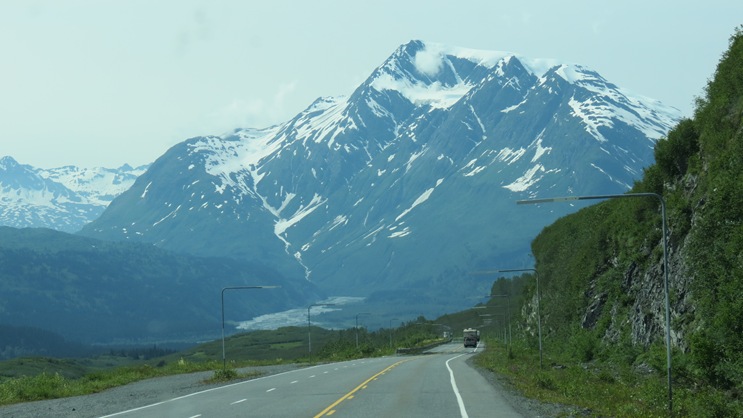 At the bottom we went through the very narrow Keystone Canyon. It was hard to get pictures because it is so narrow and tall. 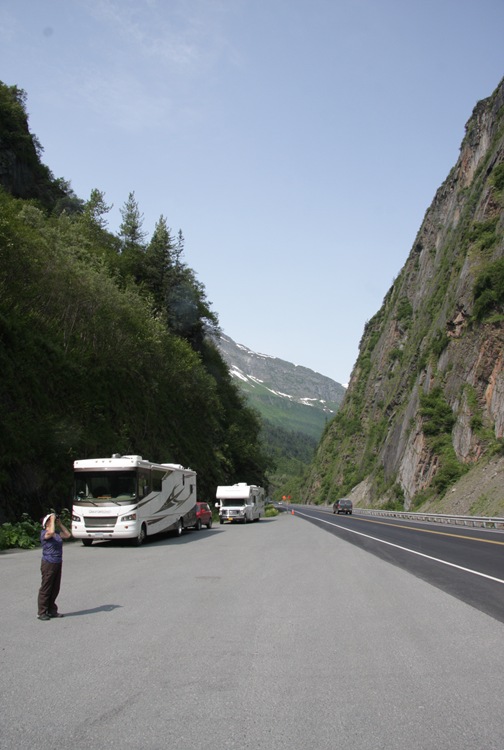 Part way through the canyon is a stop for Bridal Veil Falls. I wonder how many Bridal Veil Falls there are in the world. A very common name. This is the best waterfall we have seen so far on this trip. 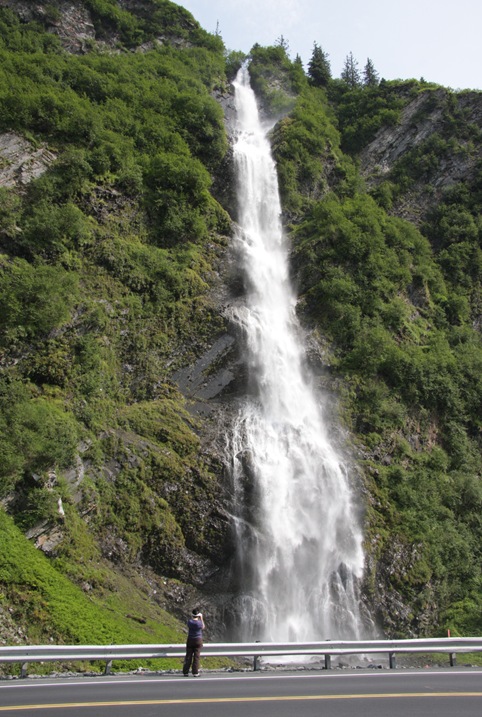 It doesn’t seem like much water is coming over the top. 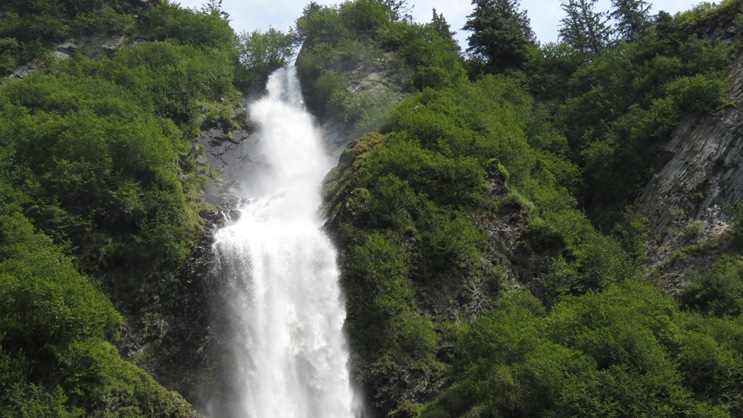 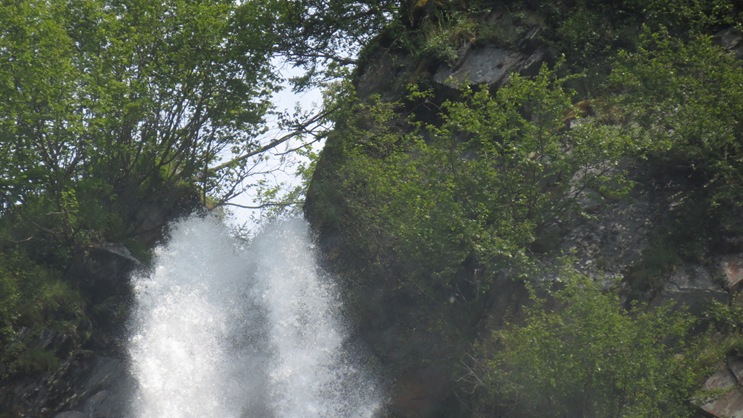 But is sure looked like a lot at the bottom. 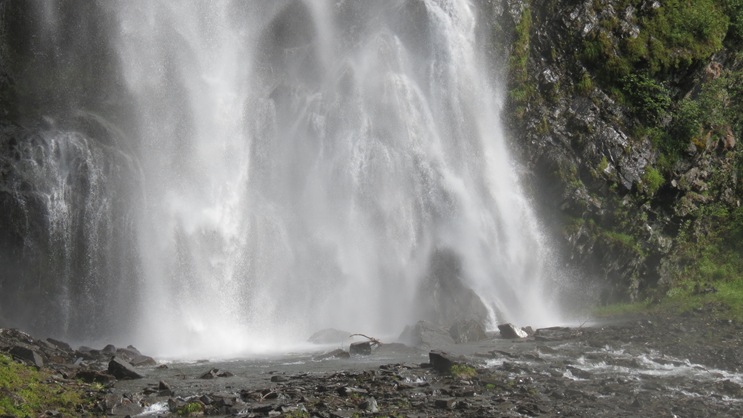 Valdez in on this flat plain surrounded by mountains. I left the bug splatter in this picture. 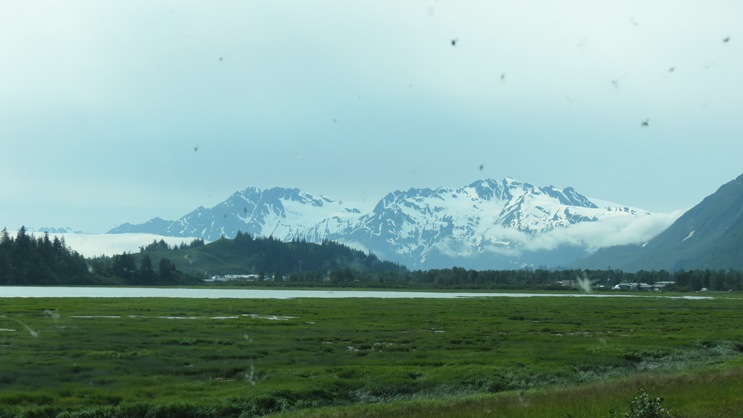 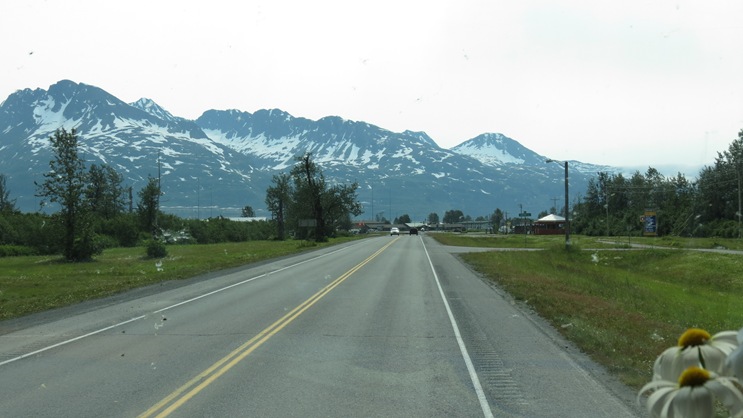 I booked our RV site for 4 days. It is just another parking lot type place but we have full hookups, WIFI and a satellite signal. We will see if there is enough to do to keep us longer.

We always seem to be the only RV with their satellite dish up. I don’t think any of the American systems can be received up here by the RV sized dishes because the houses seem to have very large dishes. We have been able to get the Shaw signal everywhere. Sometimes it is pretty weak but still useable. Also, since up here the satellite is only about 12-15 degrees up in the sky, any bad weather really affects the signal as it has to go through so much atmosphere. Of the 70 or so days we have been out there have only been about 5 or 6 when we couldn’t get a signal because of obstructions. I always laugh at how lucky Jennie has been. We could be parked surrounded by mountains but the satellite always seems to be visible in the one valley or hole in the trees around us. Having the dish on the roof also helps get us over any of the close trees.