I forgot to mention that yesterday as we were preparing to set out on our hike a guy in the parking lot asked if I knew much about the trail. It seemed that he had a reservation that night and wondered if he had time to see the waterfalls. I told him what I knew and then asked where his reservation was. He said it was in Cherokee, at the bottom of the Blue Ridge Parkway, over 450 miles away if you take the parkway. He had the parkway map but had not looked at the scale. I noticed that he decided not to do the hike,

It seems the campground had a silver invasion last night. 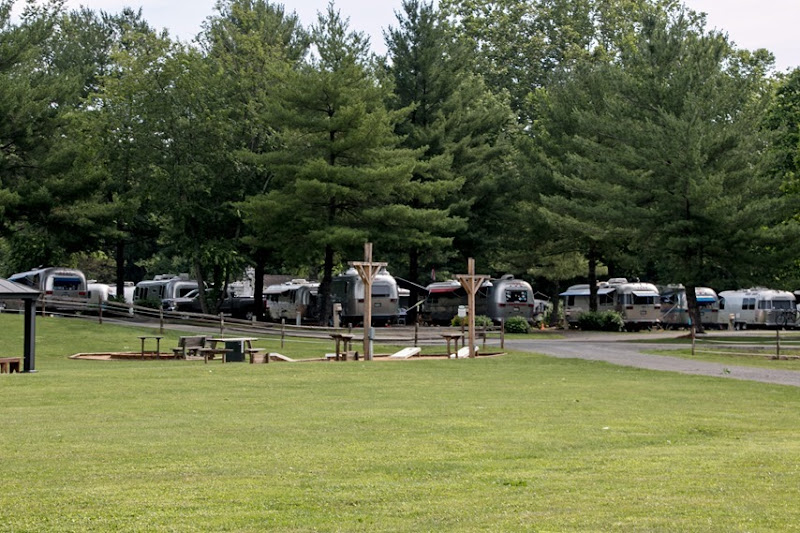 Today’s hike was kind of a bust. I guess not everyday can go as planned.

We had been going to go up into Shenandoah National Park and do two short hikes but I read the descriptions and they talked about walking in an open meadow. It was a very sunny and hot day so that did not seem like a good idea.

Both my guide book and the park newspaper recommended the hike to Chimney Rocks. It is a 3.2 mile return trip and the elevation chart in the book didn’t look too bad.

When we got to the trailhead the sign said there was a 850 foot elevation change due to all the ups and downs. That was a lot more than I expected but we were already there so on we went.

Here is the short version. The trail was narrow and overgrown with very few flat spots and very few views. Chimney Rocks were so unimpressive that we didn’t realize we had gotten there and continued on for quite a while looking for them until I finally checked the GPS map. We ended up going 4 miles in total instead of the 3.2.

We had a huge thunderstorm go through last night so all the bushes were wet and it was very humid even in the shade. It ended up being a day of very hot and sweaty exercise and not much more. 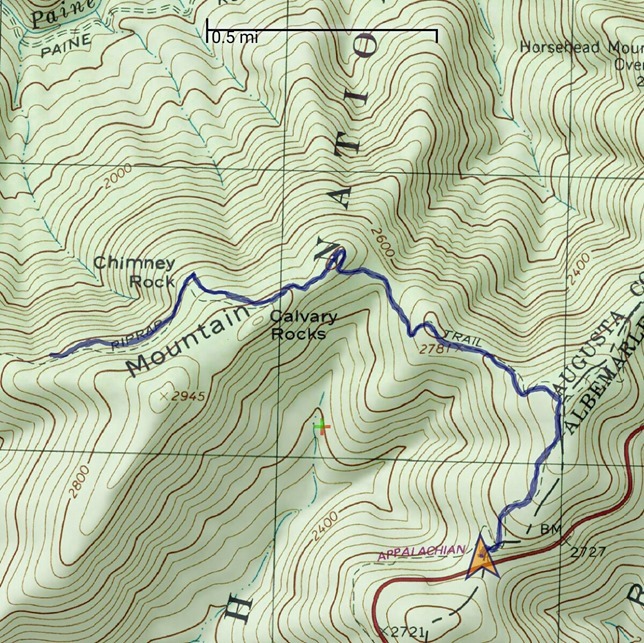 We did an initial climb up 300 feet on the Appalachian Trail and the immediately back down that distance once we got on the Rip Rap Trail itself. 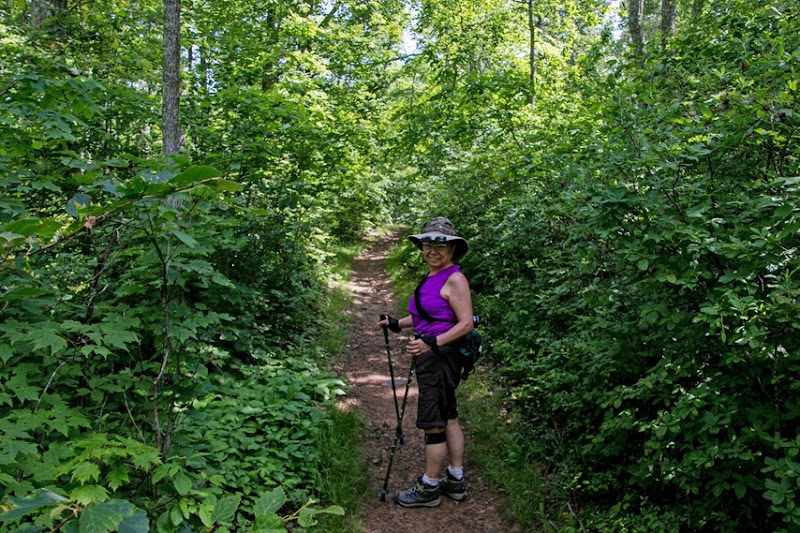 Another 100 foot climb first took us past this open area full of boulders. I think they are called riprap. We climbed to what the map calls the Calvary Rocks. 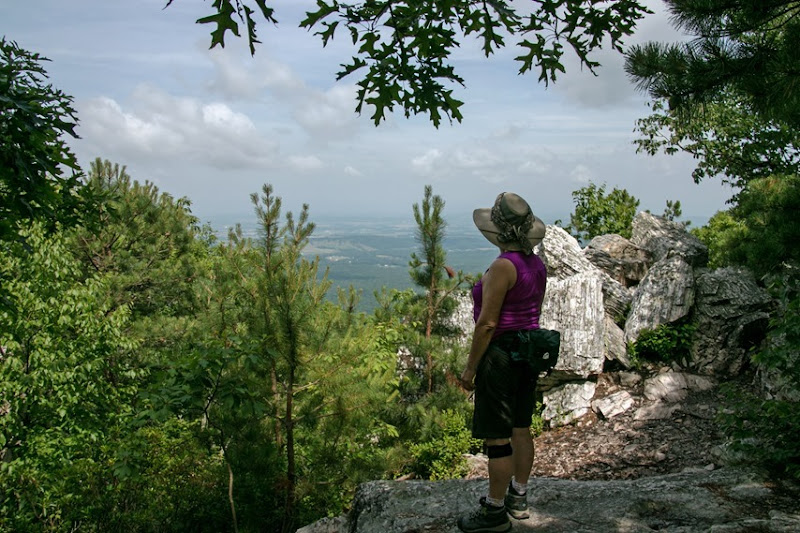 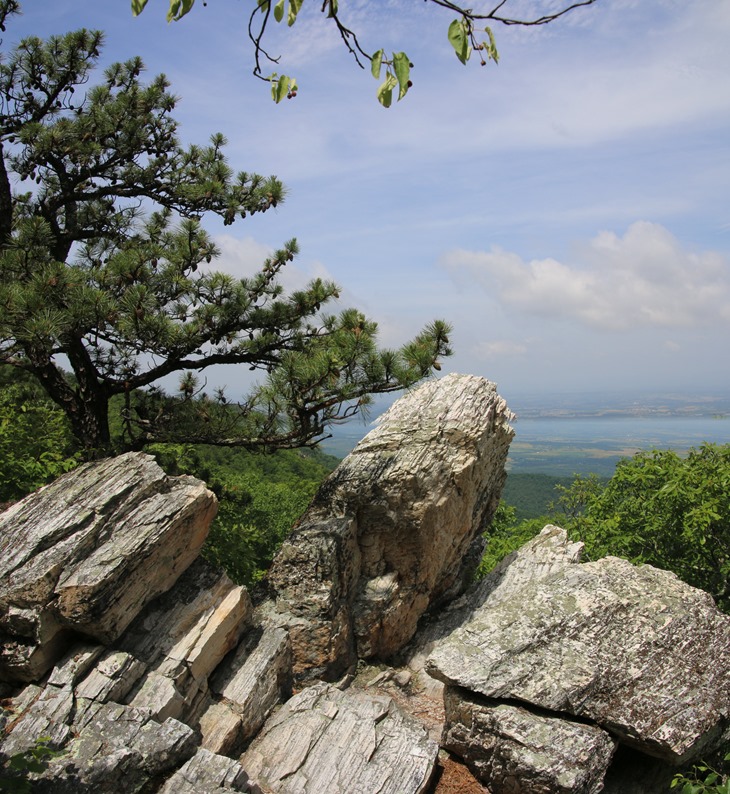 I hate to be so negative but we could have gotten better views at the lookouts, from the car, on Skyline Drive.

We later determined that you can see the Chimney Rocks from here. 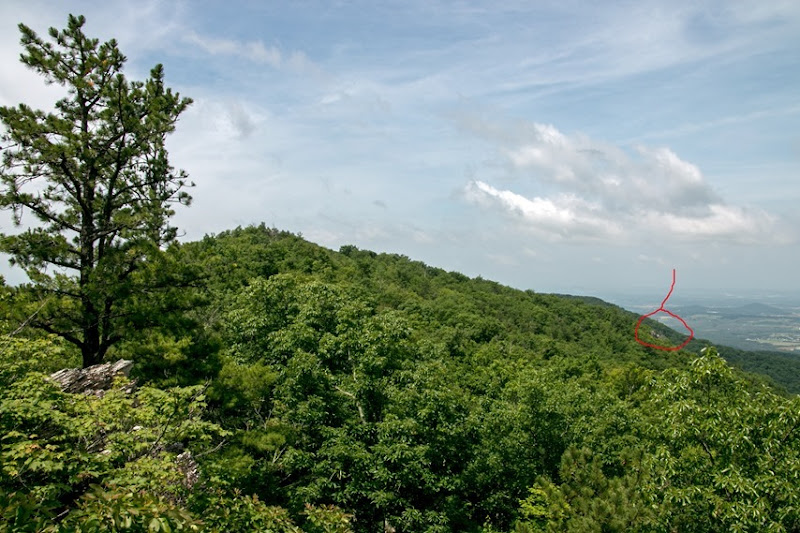 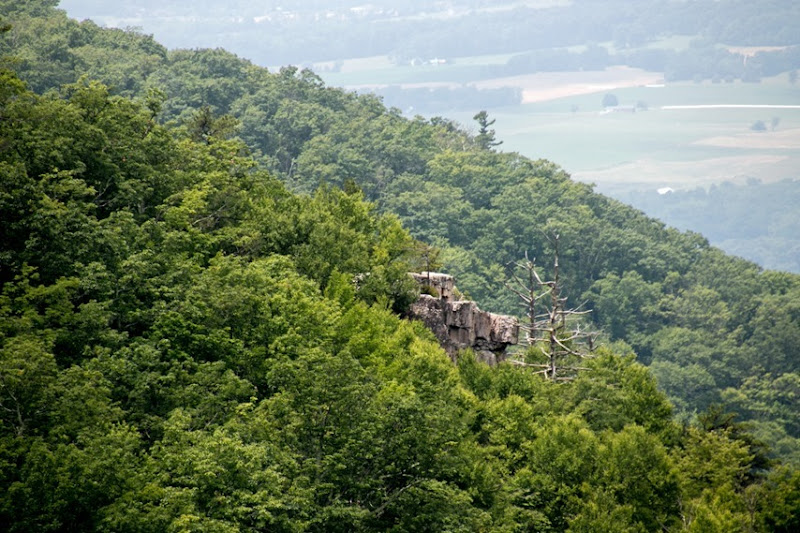 From here it was back down 200 feet to the rocks. We passed by some more outcroppings which, I think, was why we didn’t recognize our destination as anything special. 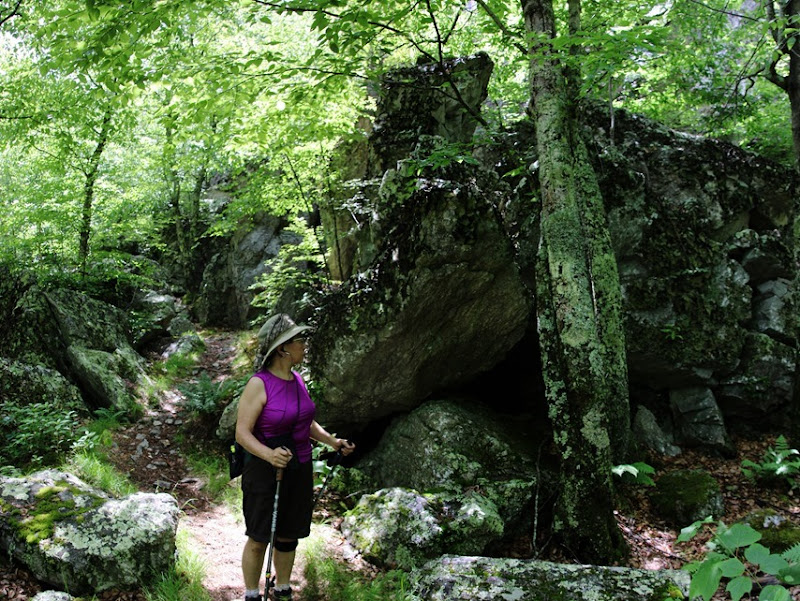 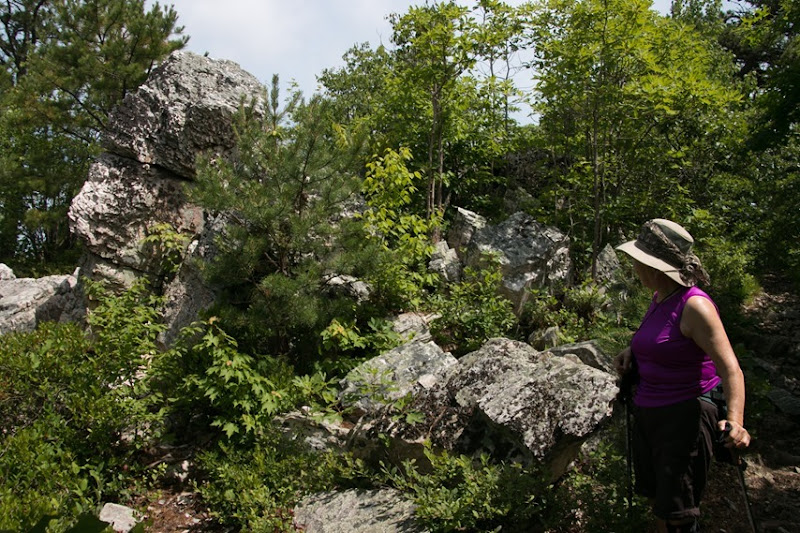 In the sunny spots, the blueberries were starting to ripen. Some were very seedy but we found a few good patches. 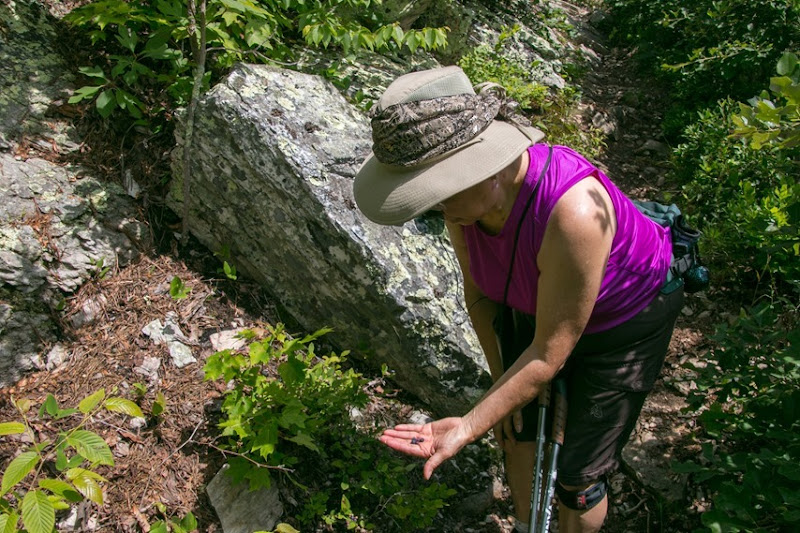 I guess I had expected the Chimney Rocks to tower over us rather than drop down below us. We explored here for a while even though we didn’t know it was our destination. 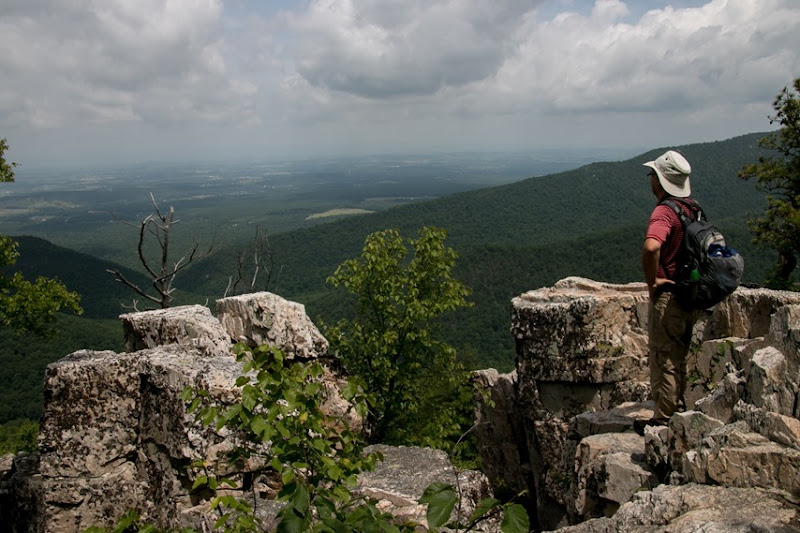 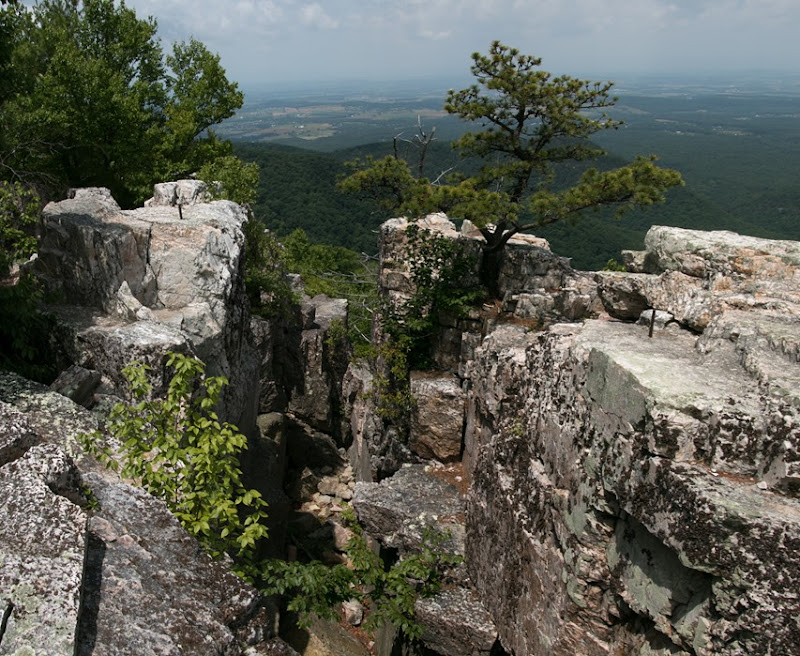 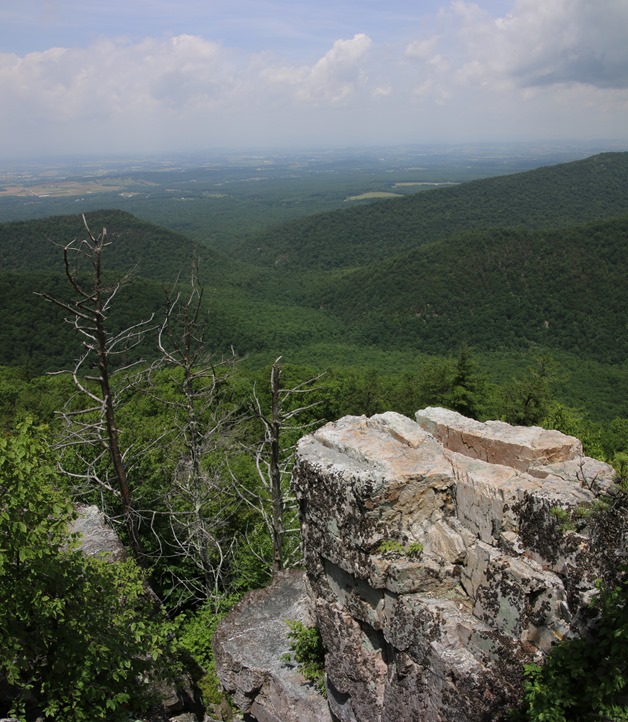 We continued on another 4/10 of a mile before it finally clicked in my brain that I should check the GPS. 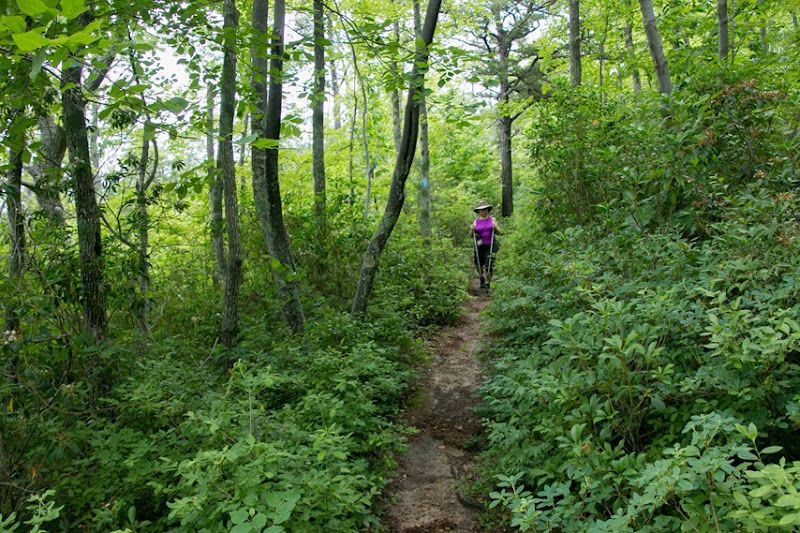 The part just before we turned around was actually the most interesting to me, but not so much for Jennie. The trail was open along the edge of the hill with nothing blocking your view down. 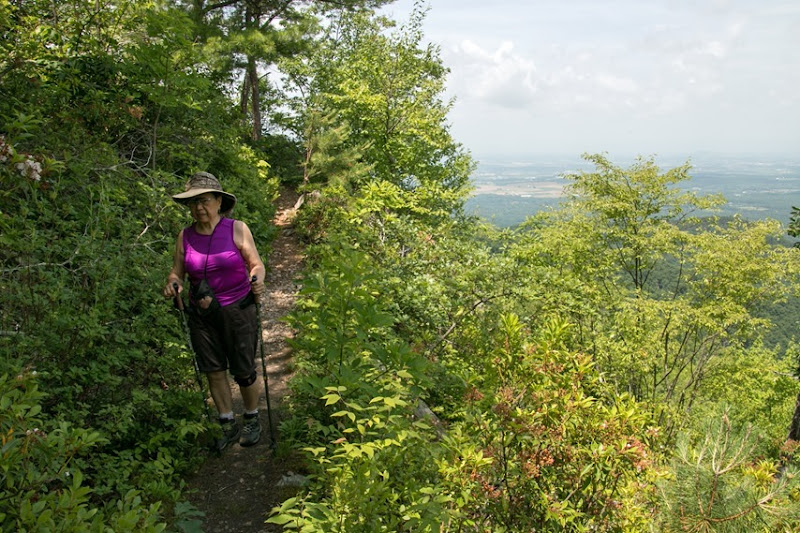 We headed back to the rocks for lunch. It got a bit grey while we were eating. The forecast had called for an increased chance of rain around 1 pm but it never happened over us. 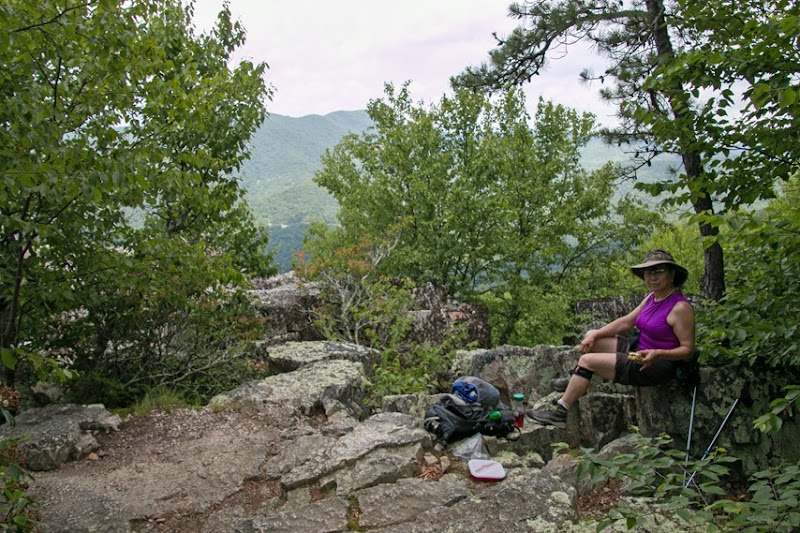 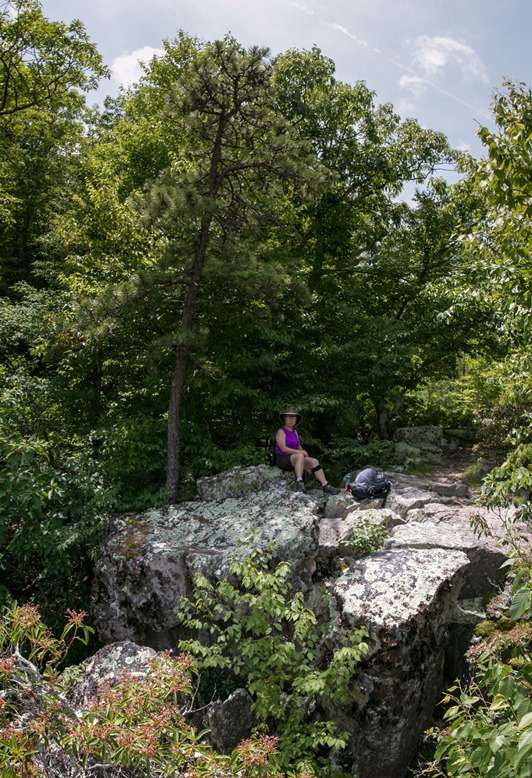 And then the long trudge back to the car. Tomorrow we move to Meadowlands Campground in Shenandoah National Park. It is another no hookup park but the sites are more open so the solar panels should keep us going. The cellular and internet connectivity is unknown although I am told that a nearby lodge offers free WIFI. We will be there for 6 days.