Rain and more rain. When I first looked through the windows this morning it just looked cloudy and grey. When we got up there was actually some blue sky and sun.

Since the forecast was pretty bad we decided just to do a very short trail and then head into town. The Beacon Heights Trail is only 0.7 miles return with a Y partway up to two viewpoints.

It still wasn’t raining went we got to the trailhead but there sure were some dark clouds around. Say goodbye to the blue sky. 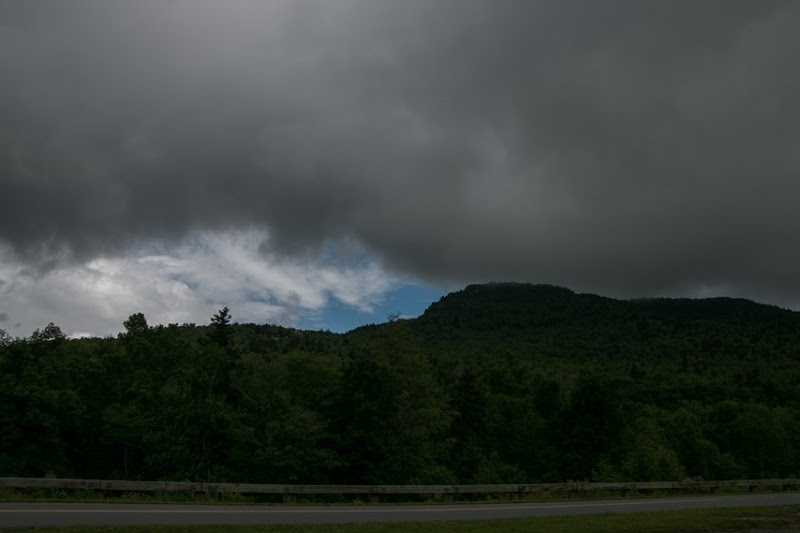 Starting the trail looked like going in a black hole. 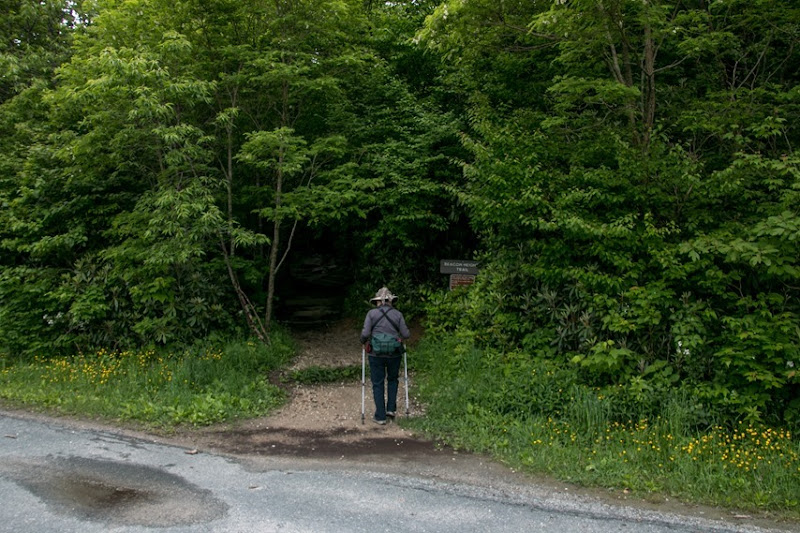 It was pretty dark and gloomy. The trail itself was very rocky and once again with all the rain, the rocks were very slippery. 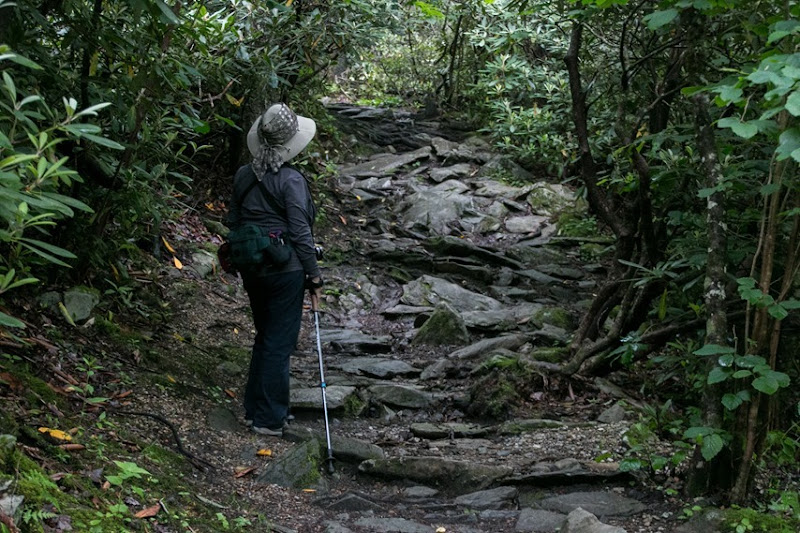 The first viewpoint was a large open rocky outcropping looking south and east. 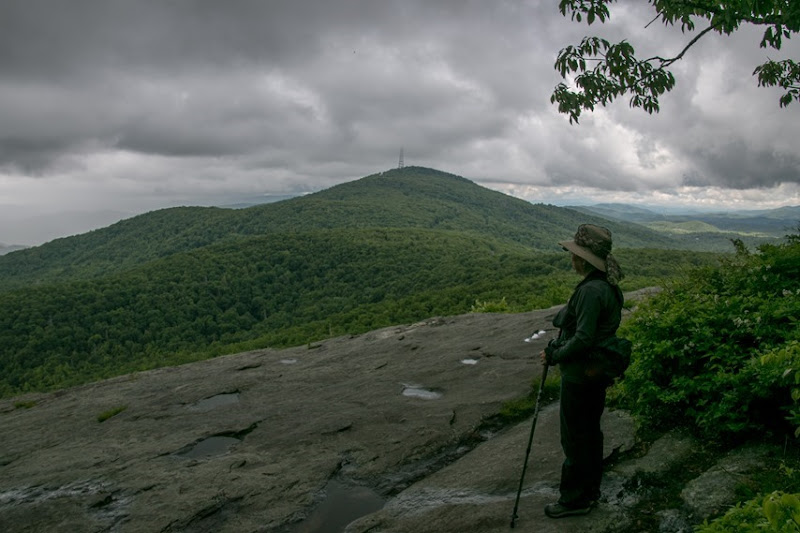 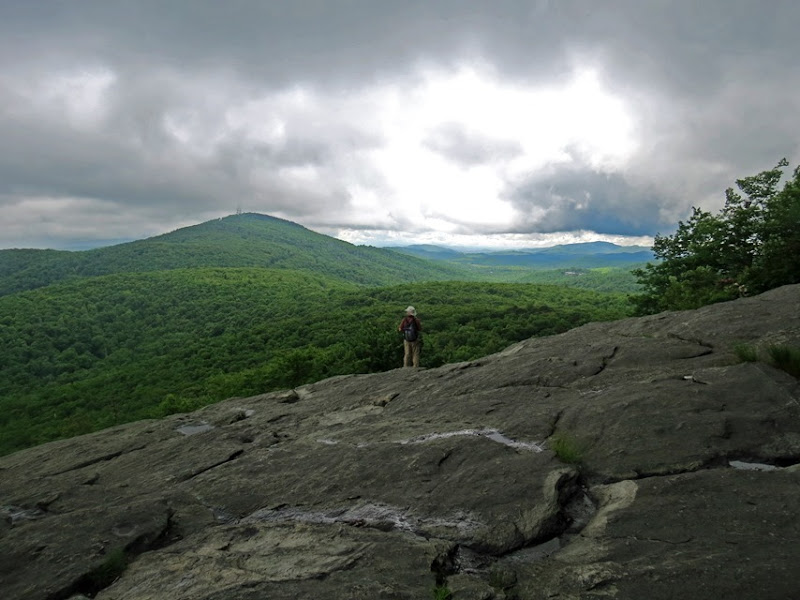 The generally dark sky with patches of sun created some interesting patterns on the rolling hills in the distance, 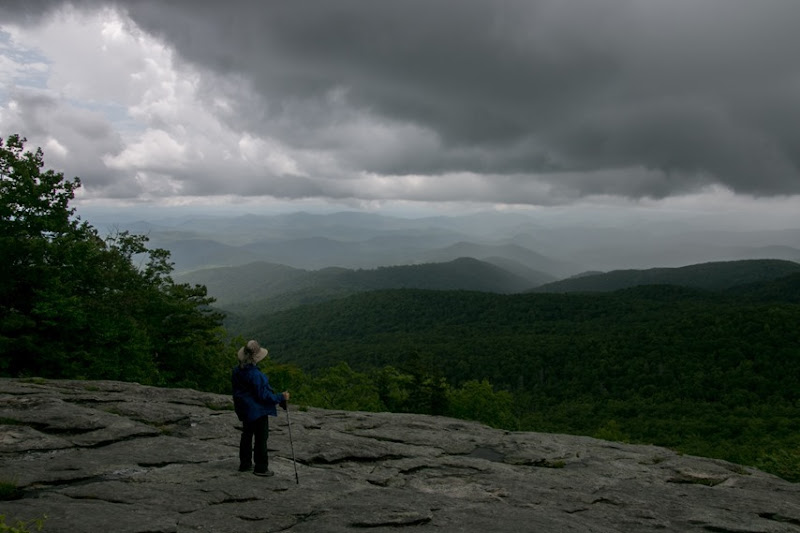 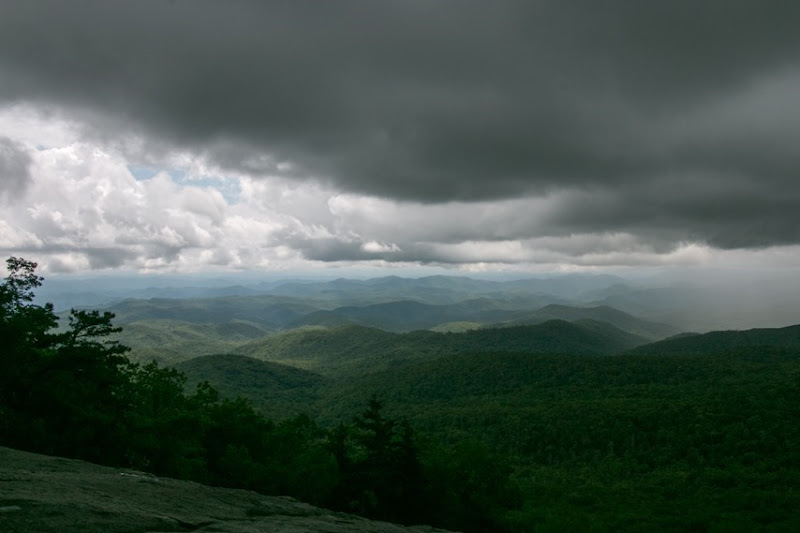 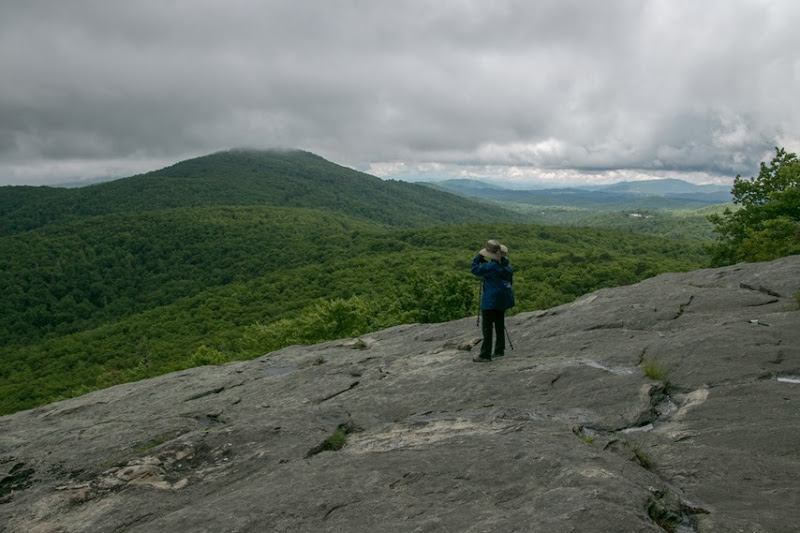 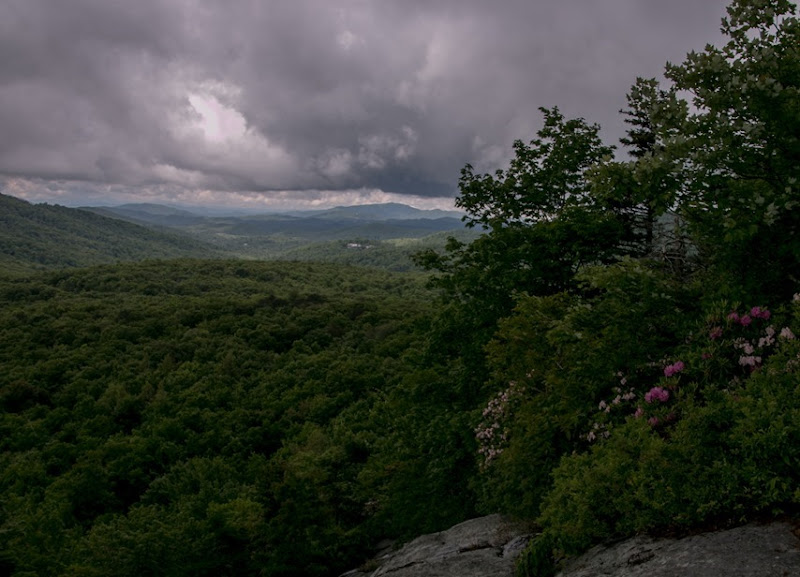 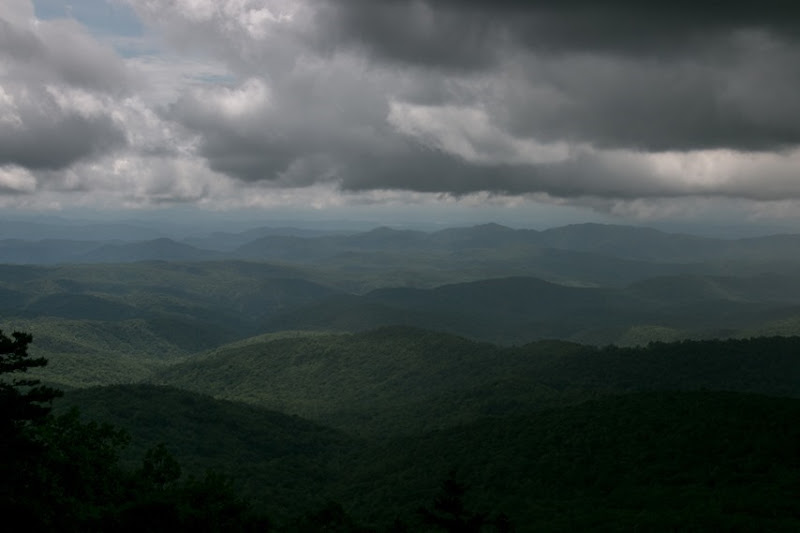 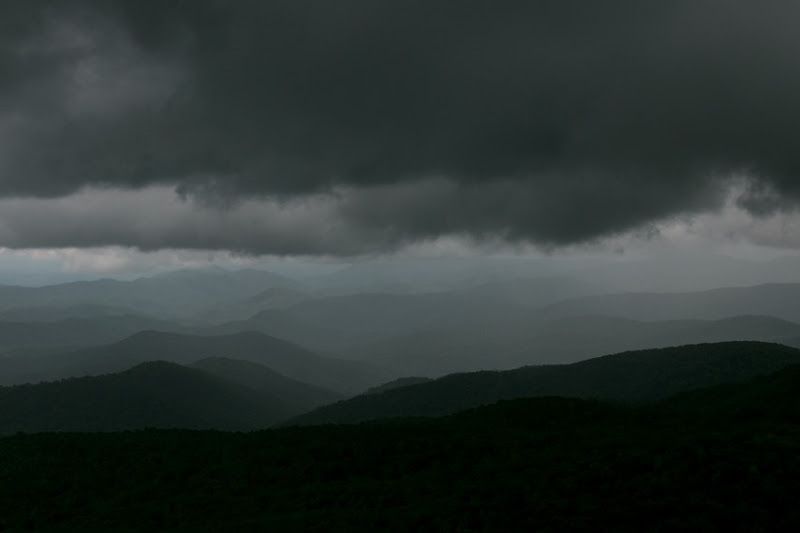 It started to lightly rain so on went the raincoats and we quickly moved on to the next viewpoint. 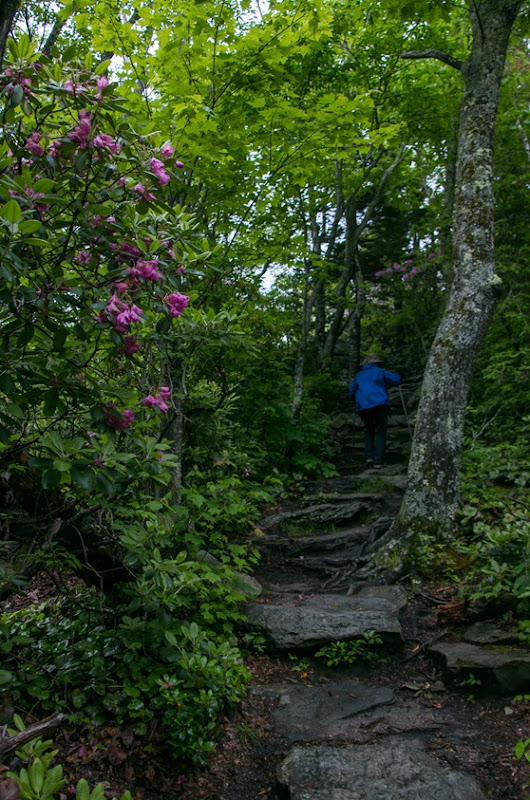 The rain intensified and just as we got to the second viewpoint we heard a very loud crack of thunder. This made our visit VERY short as it is not a good idea to be standing in the middle of a open area on top of a mountain, acting like a lightning rod. 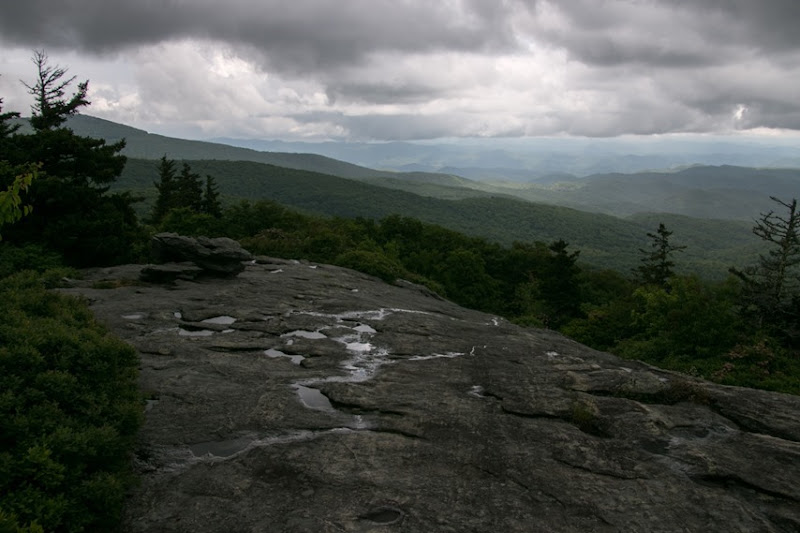 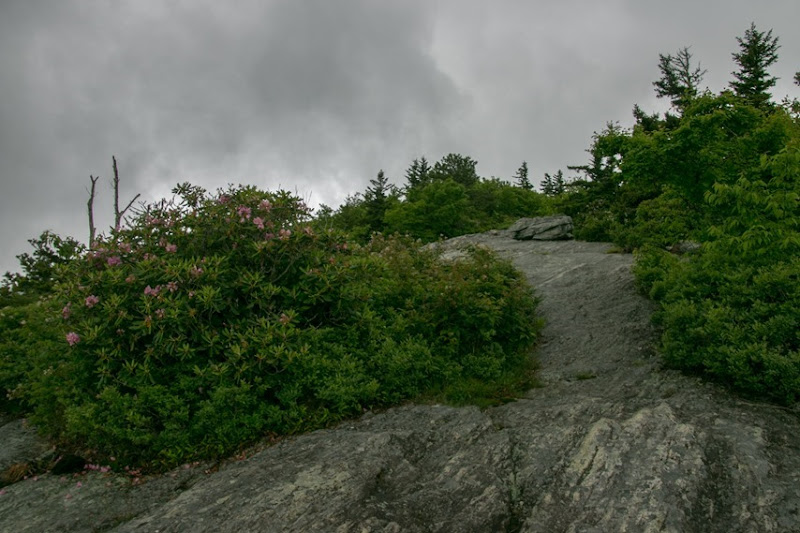 Jennie wisely declined not to come out in the open. You can just barely see her blue jacket about 1/3 down and in from the top right, in the picture below. 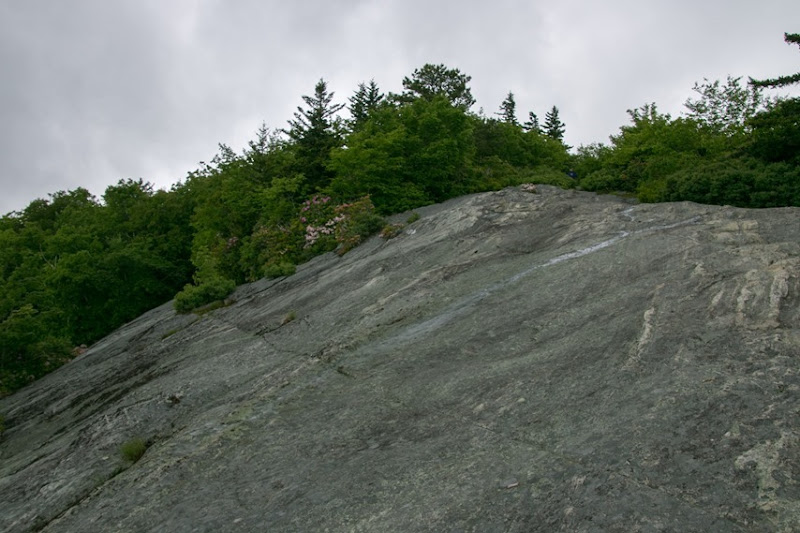 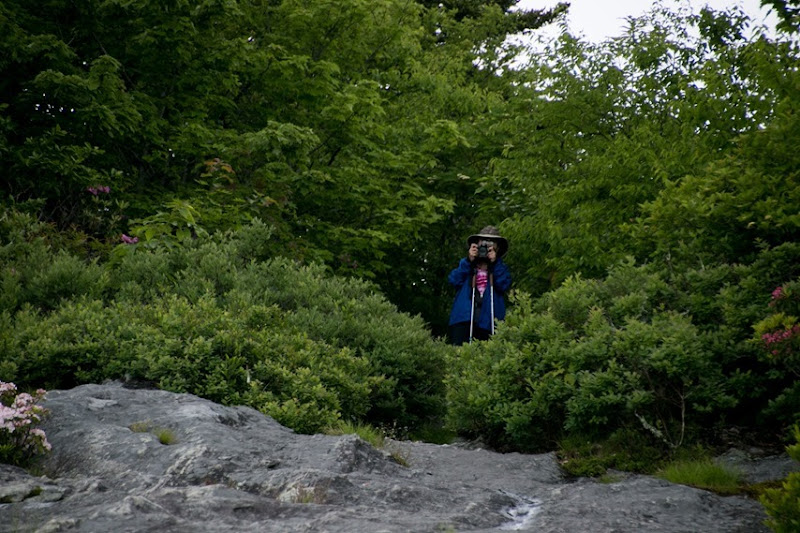 And you can just barely see me in the center of the picture below. 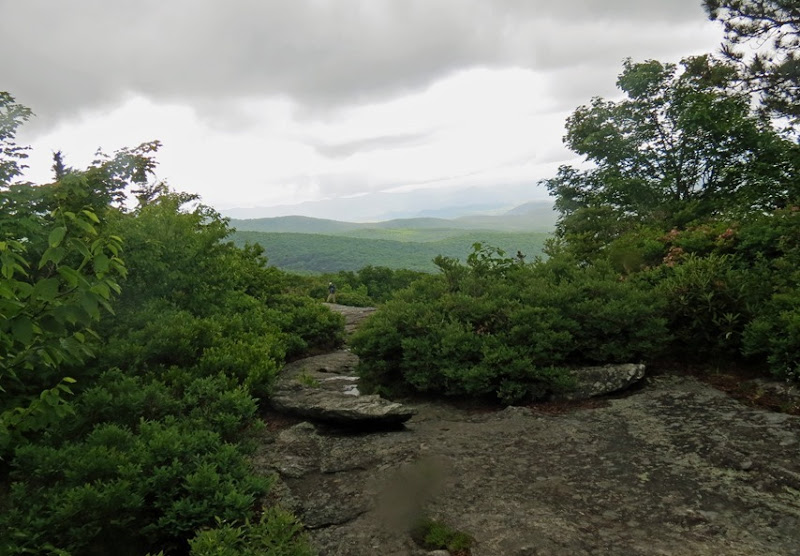 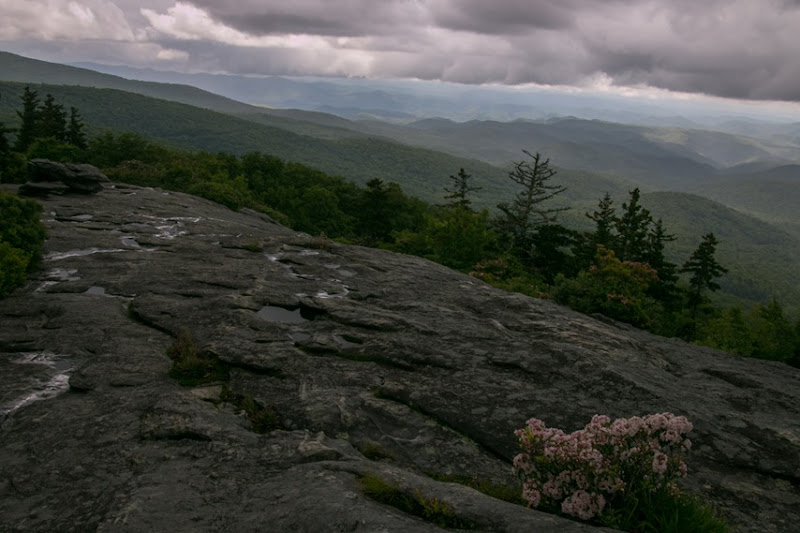 We beat a hasty retreat. It was actually kind of good that the trail was dark and gloomy because all the trees protected us from most of the rain.

Back at the car we headed into the town of Newland through the pouring rain. It rained very hard all afternoon. I am writing this at 5 pm and we are just now back in some sunshine.

Our first stop was the MacDonald's to get some free WIFI.

A few days ago Google had made a change to the interface to the blogger.com website. As a consequence anyone, meaning almost everyone, that uses a standalone program to create their blog posts could no longer login to their own blog to add new posts.

The main program that people use is called Windows Live Writer (WLW) which was developed by Microsoft but is not longer supported. Initially everyone thought that the change to blogger.com would require a change to WLW which was unlikely to happen to an unsupported product. By the way almost other all lesser used programs were similarly affected.

Panic ensued! There were many hundreds of worried posts of the Blogger support forum. The only hope for most people was to switch to the wordpress.com blogging platform. My blog had originally been there but I found the Blogger website more flexible. I really didn’t want to switch back.

On Saturday there was a post by the Blogger support team that they were working with Microsoft to try and resolve the issue. That provided a ray of hope but everyone assumed that would mean a new version of WLW and an associated long release process.

Then I checked today and, miracle upon miracles, the Blogger support team posted that everything should be working again without any changes necessary on our part. I bet the number of new posts on the website dropped to a very low number and they knew they had to fix it fast.

I had only brought the first two of my delayed posts with me on my tablet but, with great relief, they could be published to the blog. I was 5 posts behind but will wait until the next campground with free WIFI before completely catching up, which is why this post is also delayed.

After we satisfied our internet fix we decided to scratch another itch and go for some more BBQ. There just happened to be a place right across the street from the MacDonald’s. It was still raining so hard that we had to put our raincoats back on just to go the 5 feet from the car to their front door.

I had a combo plate with pulled pork and chicken. Jennie had a 1/2 rack of ribs. It was very good and as usual we had lots of leftovers.