When I first got the RV I downloaded the user and maintenance manuals from the Ford website. Up to the mileage the RV is at now (about 50000 km) and the age (about 5 years) I had thought that all that was needed was oil changes.

Since I could rarely find a place, with doors tall enough to get the RV in, to do the oil changes let alone any major maintenance I ended up learning how to do the lubrication, oil and filter changes and did about half of them. It not actually too hard with the RV because it is so tall underneath I can almost sit up when I am doing it.

For the last year I have been trying to find a place to get this maintenance done. There is a Ford dealer in Hamilton that will do it but it is very awkward to get to. There is also a RV dealer between Barrie and Orillia but that was kind of far to drive. All of the other RV dealers I asked said they only work on the interior and do not do chassis work. I had thought I was going to have to make the trek north of Barrie.

When we were driving home from downtown Kingston the other day we passed by a Ford dealer and I noticed a sign that said that they also service the large Ford trucks. I quickly turned in and asked if they could service the RV. To my relief he said sure and that I could bring it in right away. As we already planned to do the cruise yesterday I waited until today.

We got up at 6:30 am today. Jennie went in to spend the day in our friends house while I got the RV to the dealer by 7:30. I discussed what would be done with the manager. He suggested a brake service but said he didn’t think the brake fluid should need changing. They would check it’s condition and only change it if necessary. 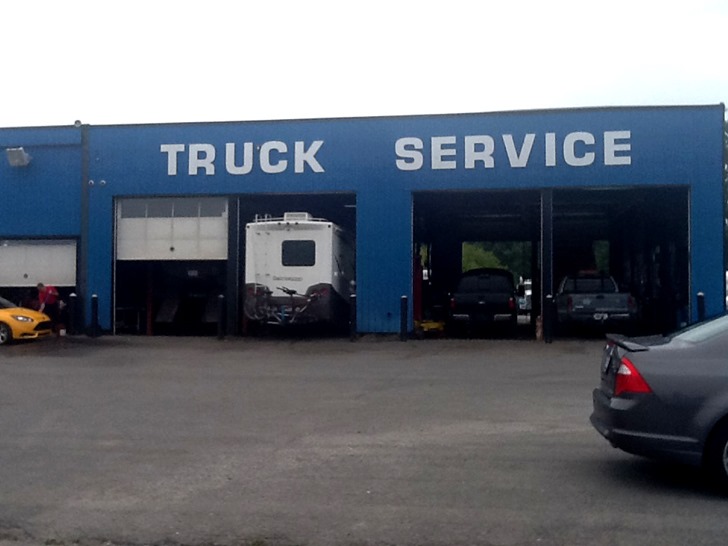 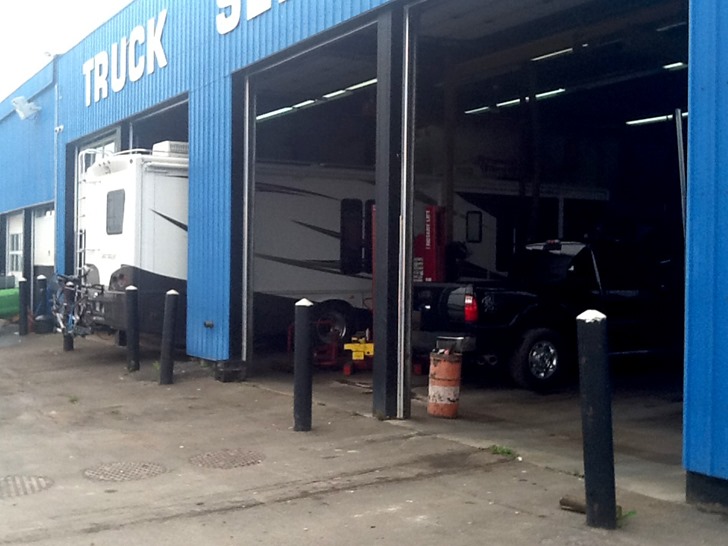 I spent the day sitting in the waiting room for as long as I could stand the strange shows that the other people wanted to watch on the TV and then walking around the lot. At least there was free WIFI.

Every once in a while I would walk by the RV to see how it was going. It was weird to see it propped up on jack stands with those huge wheels off so that they could get at the brakes.

When I first brought it in, I saw a sign on the wall say that they charge $104 an hour for labour. There was a mechanic and his apprentice working on it all day. As the hours went by, I could see the dollars signs adding up.

At around 3 pm, after 7 hours, they were done. They had changed the transmission fluid, engine coolant, fuel filter and cleaned and lubricated all the brakes. I was almost as impressed by what they had not done. He said that the brakes themselves and the brake fluid were fine. I would never had known any better if they had changed them.

I was expecting a bill of a couple of thousand dollars but I was pleasantly surprised that it was only $880. He said that he only charged the official book rate by each specific job even though some of the jobs, especially accessing the brakes, were much harder with the RV. As this is the first and only service it has had in the 4 years I have owned it, $880 is not too bad. When I had the Audi I never escaped for under $1000 and it was usually almost $2000.  Even my last service for the Honda was $1400.

So with a huge load off my mind, I highly recommend Edwards Ford in Kingston. The next time I need a major service I may just drive back here.

On an other note, our generator has been acting up so I had been looking for a place to get it serviced, without any success. Randomly, today, while I was walking around the dealer parking lot, I saw two pickup trucks back to back and two guys pushing a generator of the same brand as mine from one truck to the other. I asked the car salesman that was getting the generator where he had bought it. He pointed at the other guy. It turns out he owns a business that sells and services them. He said I should call him early Tuesday morning and could probably bring it in for one of his service men to check it out. Very unexpected.