Well this year's adventure has begun.If everything goes according to plan it will be our longest one yet, at about 5 1/2 months away from home. We are on our way out to explore southern mainland British Columbia.

This is, hopefully, our approximate path barring any closures due to forest fires. 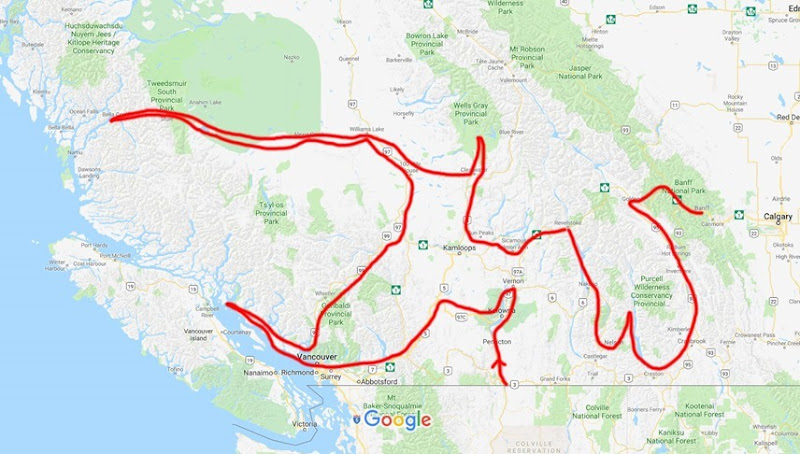 I went up and got the RV from the storage lot on April 5. We planned to leave on the Sunday April 15th and we like to take our time packing. As it got closer to the 15th the weather started looking worse and worse. We couldn’t leave before Jennie’s final curling game on the Thursday the 12th. I thought about leaving early on Friday or Saturday but from the forecast along our path we would just be driving into the bad weather so that was out.

The forecast for Saturday and Sunday lived up to its hype. Rain, sleet and freezing rain leaving everything covered in about 3 inches of slush covered in a hard coating of ice. 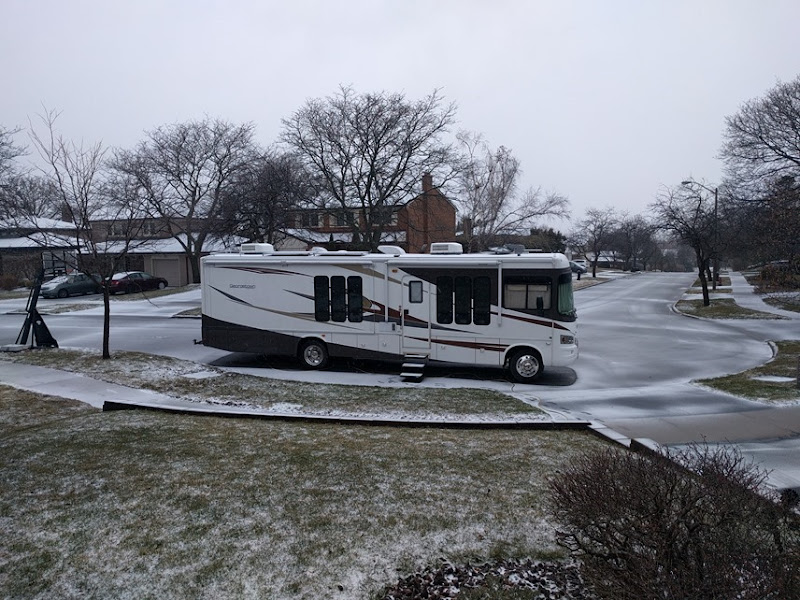 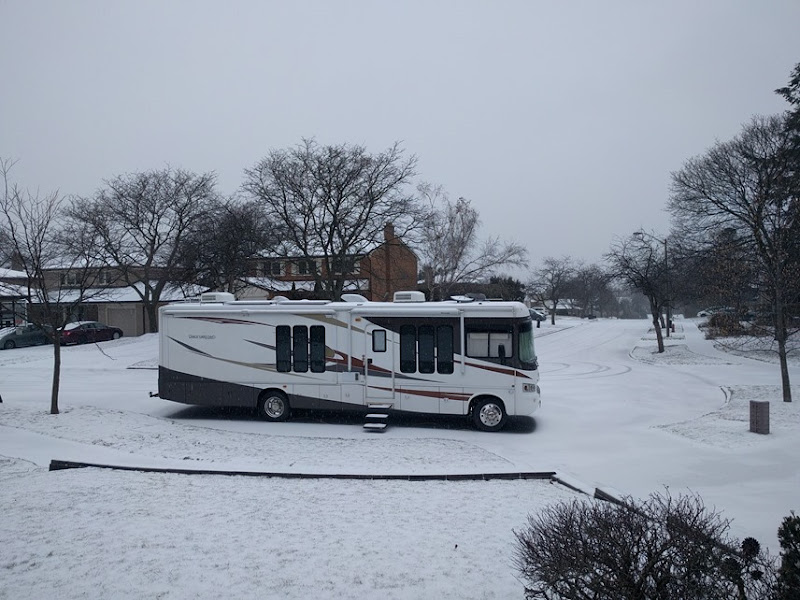 So we postponed liftoff to Monday morning. The forecast for Toronto called for just rain, while the forecast along our path for the days we would arrive at each stop didn’t seem too bad. Cold but just a bit of snow in some places.

By Sunday evening we had everything but the last minutes stuff packed. Unfortunately due to the sub zero temperatures that we will encounter on the trip out I couldn’t fill the water tanks. The tank itself and the waste tanks have heaters to prevent them from freezing but they would draw an awful lot of battery power to run. Also the water lines under the floor are not heated and I was afraid they would freeze and burst. So we just have 2 - 20 liter water jugs to last us the 6 nights it will take to get us to BC.

As usual we are Wallydocking (staying at Walmart parking lots) every night mainly because it is free and also there are not a lot of campgrounds open this early.

My first task upon getting up was to VERY carefully shovel off the roof of the RV. As I said there was about 3 inches of slush and ice on everything. To have some of that break off while we were driving would at the very least smash into our CRV that is towed behind the RV and at the worst smash into a car following us and cause them to have an accident.

Thankfully with the slush underneath it wasn’t too hard to break the ice coating and throw chunks of ice and snow to shatter on the ground. I did get a lot of strange looks from all the people driving by on their way to work. After that task I was very cold and very wet. After a quick change of clothes we got the last minute stuff in the RV.

We don’t have to shut the house down as much this year because my daughter and her partner are going to move in to save themselves some rent.  It works for us because I don’t have to hire someone to mow the lawn or worry about an unoccupied house.

We got away about 11 am. The drive through Toronto was not that pleasant as it was rain pretty hard along with the usual Toronto traffic. 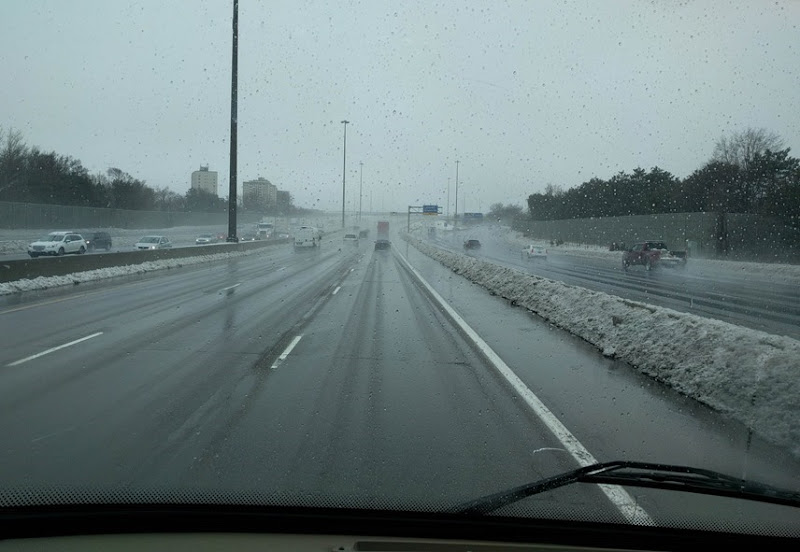 The rain did eventually let up some here around London. From there to the border crossing in Sarnia was easy because Google Maps saved us from a from a 45 minute delay due to an accident. There was an highway exit just as the traffic started backing up, another one just after the accident and a not too out of the way road between them.

The border crossing was one of the easiest yet “Just the two of you?”, “Where are you going?”, “Any animals?”, “Thank you”. We always worry about what food we can bring in but he didn’t care. It may be because I said we were just passing through the states on the way to BC.

One glitch at the customs booth was that I drove up and there were three lanes with signs saying for cars only, no RVs. The only other lane was for Nexus. I stopped out in the lanes looking bewildered before they motioned me into the Nexus lane. All the other years it has been clearly marked what lane I should use. At least there was no one behind me while I sat blocking everything.

We got to Lansing at around 5 and found a nice level spot in a rather empty parking lot.

In the evening it was hovering around 0C outside. Our propane catalytic heater could not keep up by itself we so broke down and started the generator for a while to run our electric heaters

Overnight I think it went down to –4C outside. We left the propane heater on low just to stop things from freezing and it got down to about 5C inside. We were warm enough in bed but it sure made it hard to get up in the morning.

Not unexpectedly, no other RV joined us. We have seen quite a few on the road but I would guess that they are just some very surprised people coming back from their winters in the south.

It also snowed overnight. It was bare when we arrived. 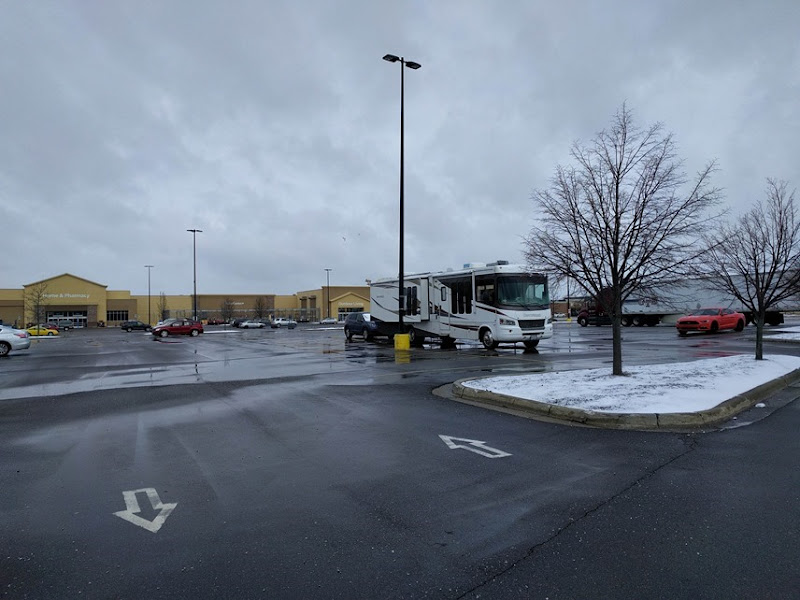 Since we would be using our bottled water in the sink and the toilet I didn’t want the water to freeze in the grey and black water tanks. Conveniently there was Lowes just across the street so I bought two jugs of plumbing antifreeze. One for each tank should do the trick. Since antifreeze is not something that is normally needed this time of the year it took me and an associate quite a while to figure out where they had stashed the remaining stock.

The morning drive through the rest of Michigan had a bit of everything. Wind, rain, snow, and sunshine as we neared Chicago. 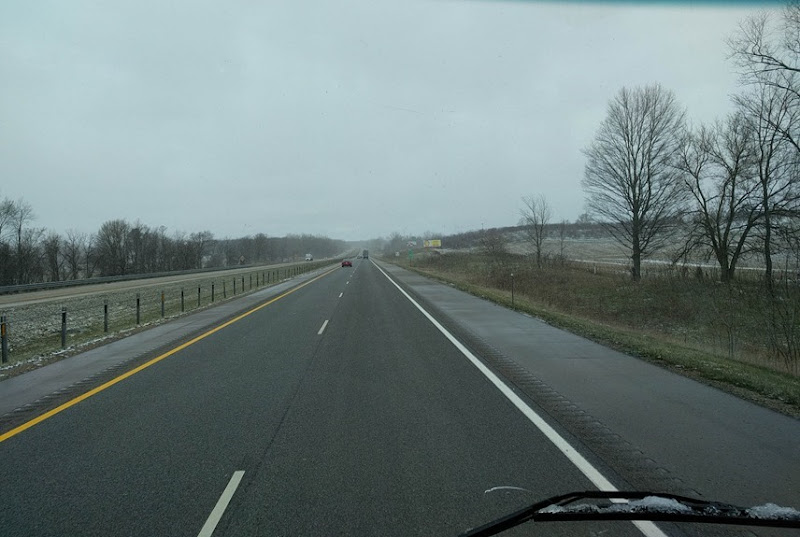 I never like to drive through Chicago. I always seems to be stuck in the middle of several lanes of wall to wall trucks, all trying to go faster than me. Today was no different but at least the weather was nice.

Following the GPS we took I-90 through most of Illinois, which happens to be a toll road. After 7 toll booths and about $30 in tolls we made it out of Illinois. We probably could have taken a cheaper route but this was the fastest and least busy. And the highway was pretty smooth. 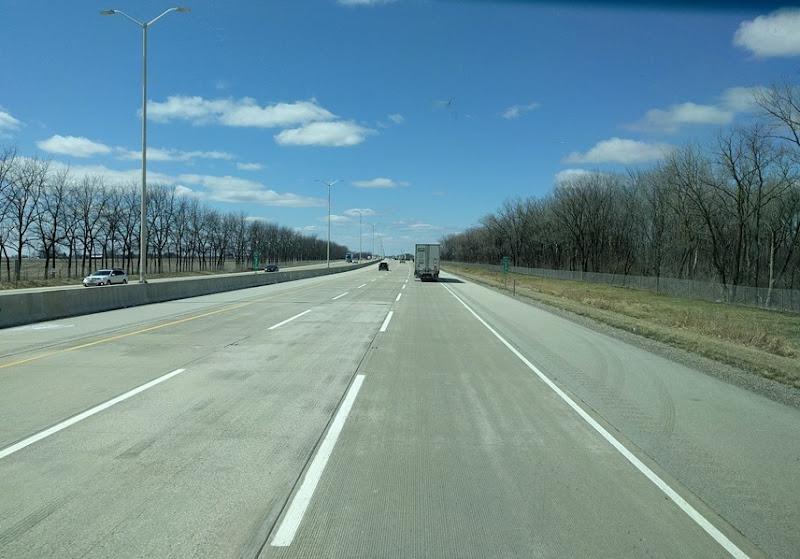 We are now parked at the Walmart in Sun Prairie. When we drove in the lot was very full but we found a sloping spot along the edge. 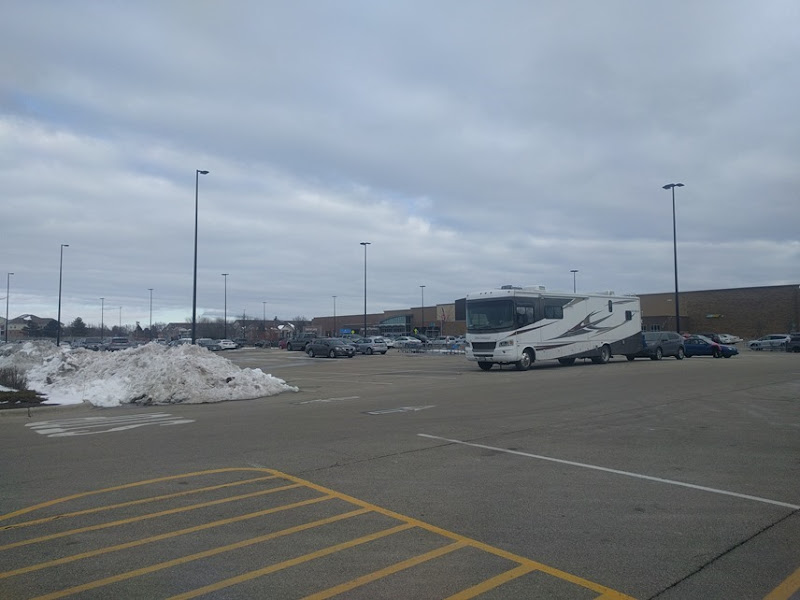 Here is our path for the last two days.