Much like yesterday, today had a low probably of complete success but even partial success was pretty good.

Mount Kobau is an 1871 m (6100 foot) tall mountain just west of Osoyoos. There is a dirt road that goes all the way to the top and then there are a couple of short hikes to some fabulous 360 degree lookouts. Long story short, we were too early in the year and the road was snowed over part way up.

On the way we first stopped for a quick look at Spotted Lake. It is considered one of the most highly mineralized inland lakes in the world. In the summer there are white crystal circles on the surface. 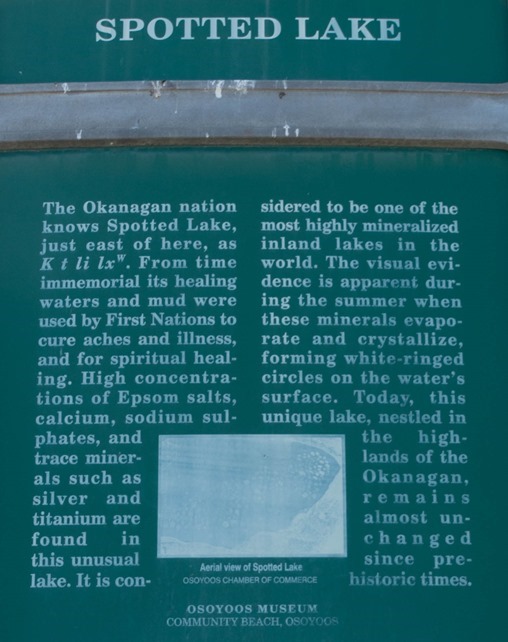 Right now we could just see some dark circles beneath the water. 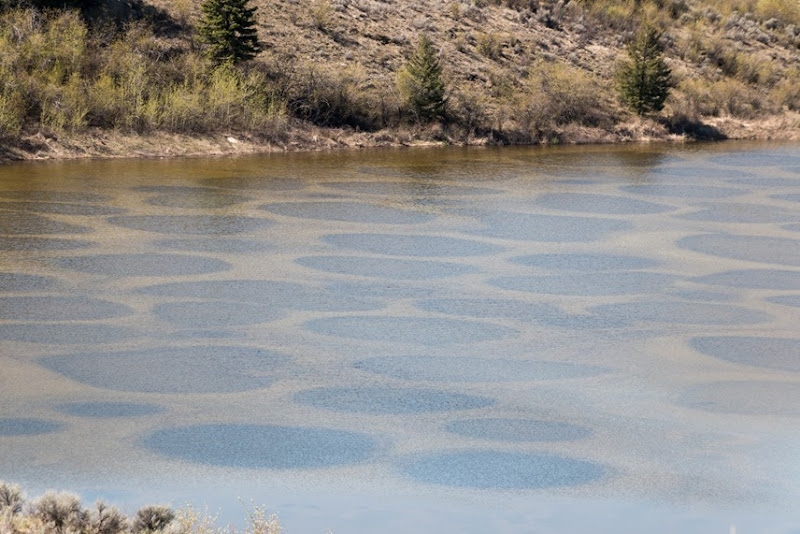 Next was our attempt at Mount Kobau. The road was dry but very wash boarded. There was northing any normal car couldn’t have handled. We just chugged up at about 20 kph to stop the car from shaking apart. 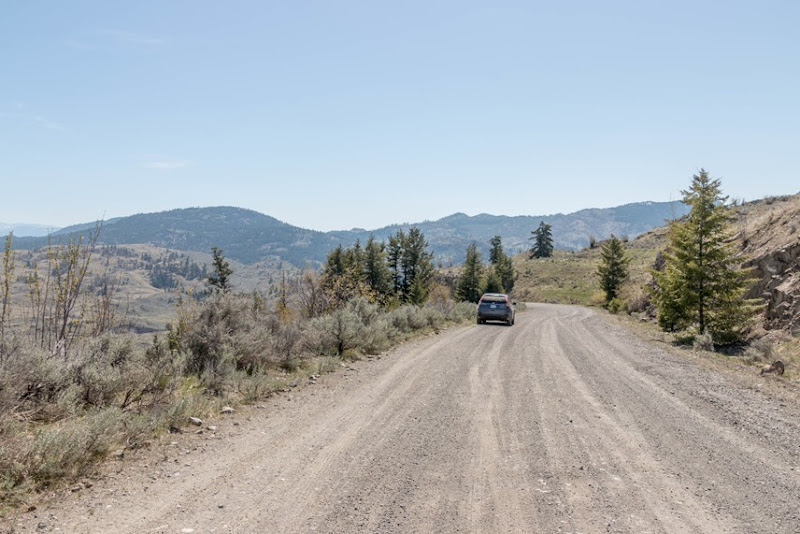 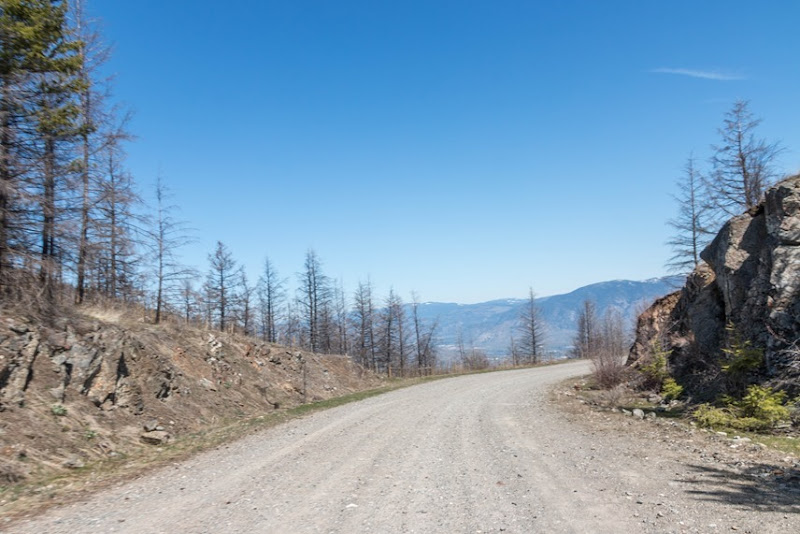 There were a few rough spots but they were easy to work around. 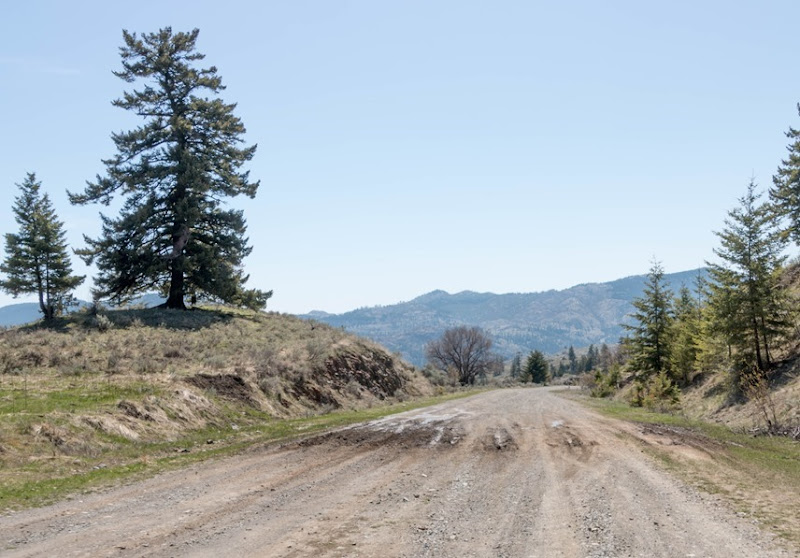 Up higher we started to see snow. 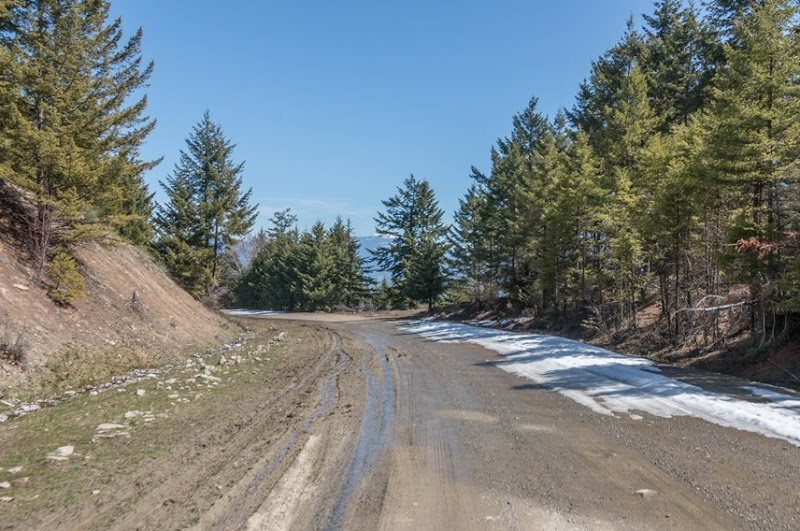 We quickly stopped at a great viewpoint, snapped a few pictures and moved on.

Up to now we had been on the south facing side of the mountain. Unfortunately, we soon rounded a corner to the north side. I plowed the CRV through a few places where the road was covered in slushy snow. 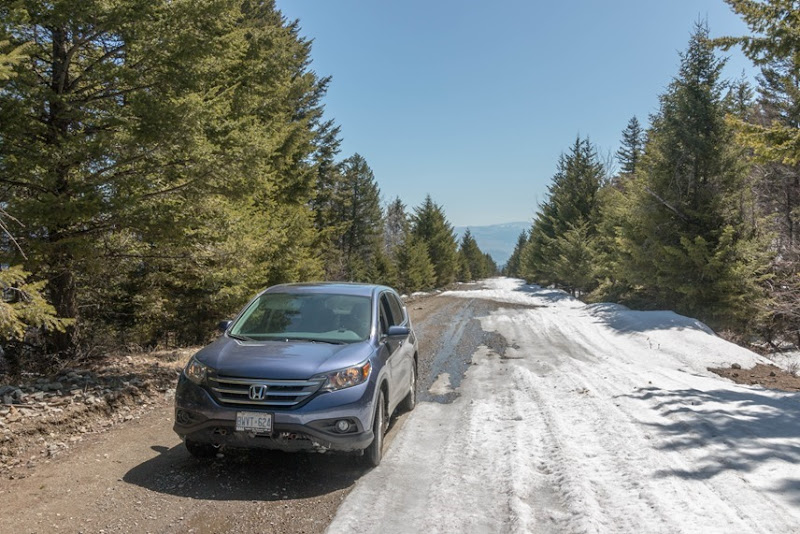 But then up ahead it seemed to be rather deeply covered for as far as I could see. 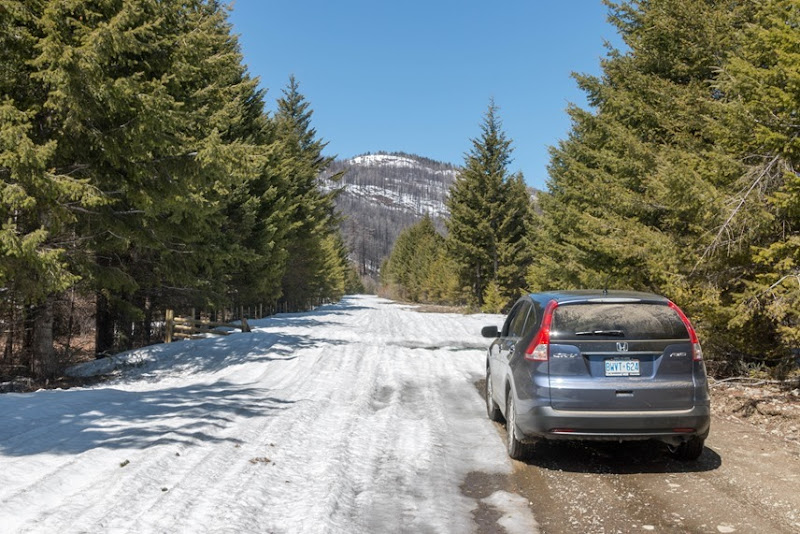 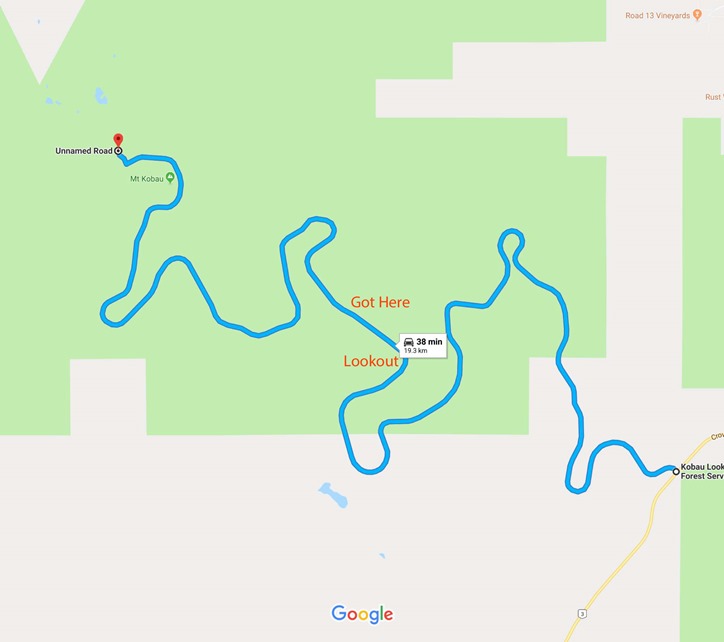 Knowing that it was impossible to continue, we turned around and retreated the short distance to the lookout, to have lunch. 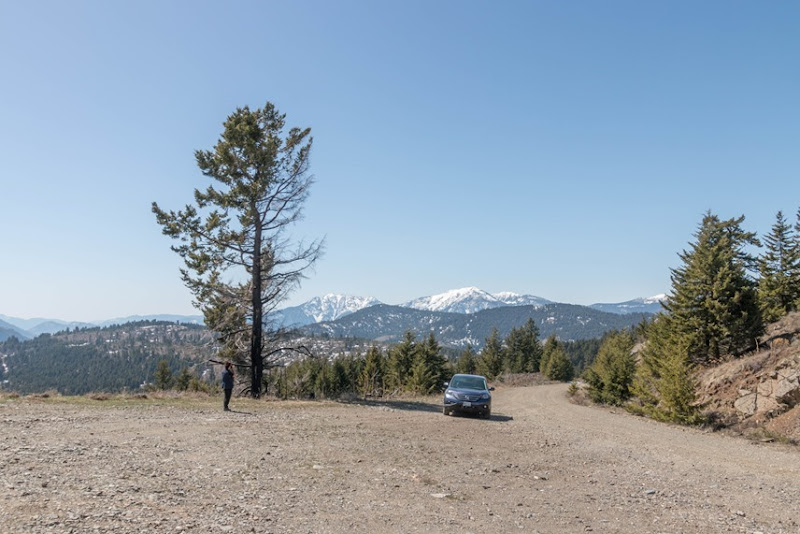 It was not a bad consolation prize. 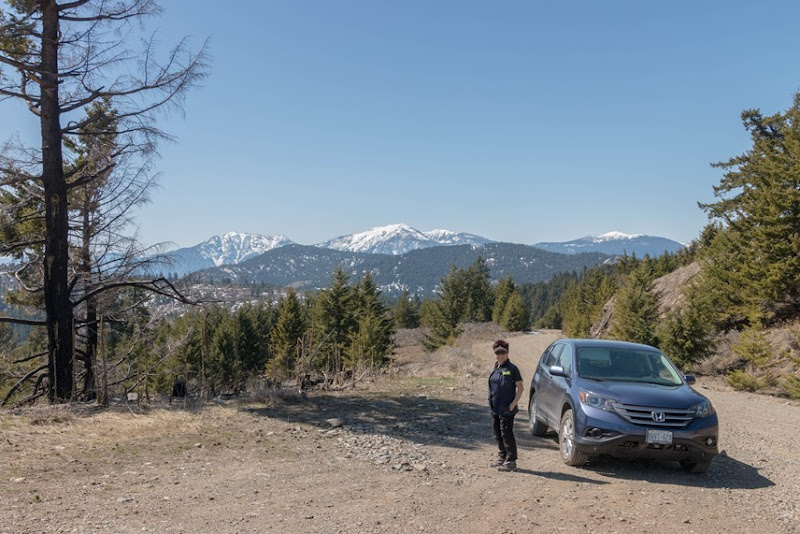 Another great view way down to Osoyoos. 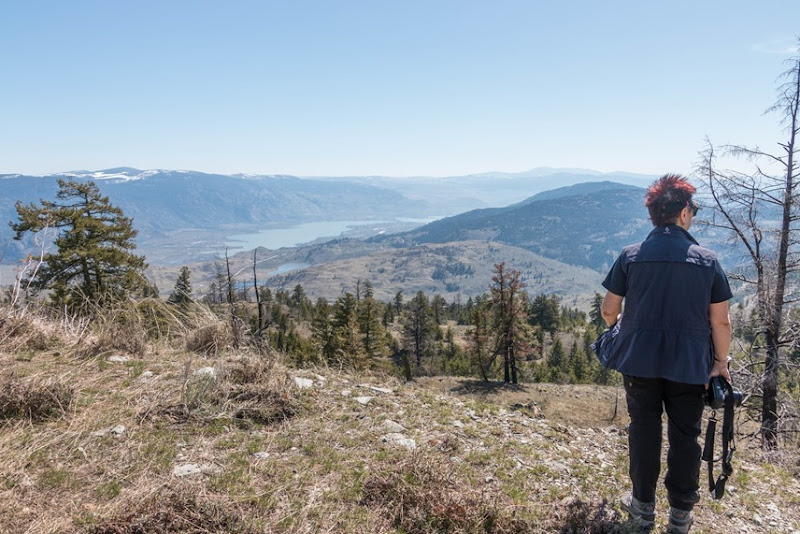 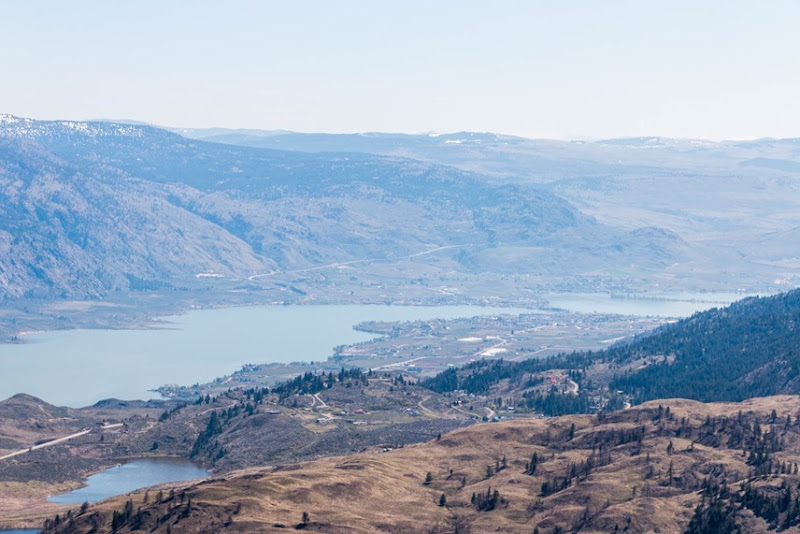 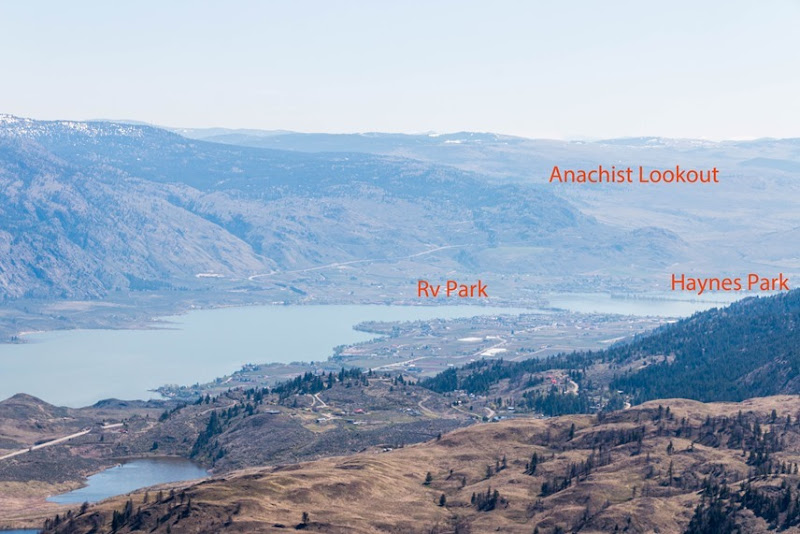 And Spotted Lake below us. 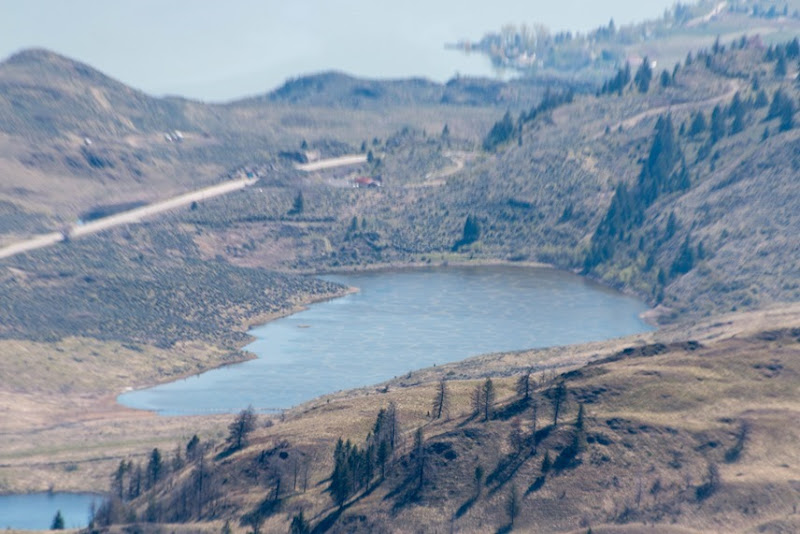 There had to be a photosphere.

Eventually we tore ourselves away and slowly made out way down in first gear.

This almost looks like a drone shot but I just climbed the hill next to the road.

Heading up we had seen a car park near the start of the road. Then a few km later we saw a young couple walking up the road. I have no idea why they thought that this would be a nice walk. Surely they could not have planned to walk the entire 18 km to the top.

As we drove back down we saw them almost back at their car. 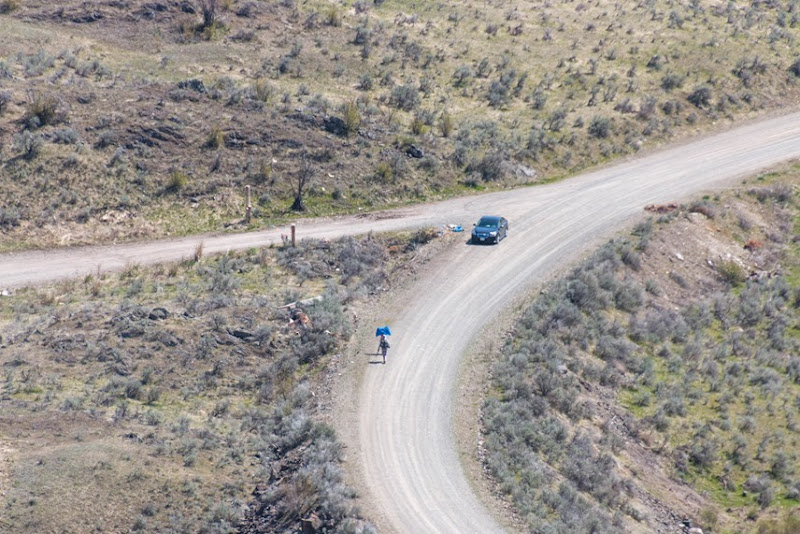 The gentleman was even holding an sun umbrella over the ladies head.

Since I had planned to do some hikes at the top, we now had some time on our hands. I had read good things about a huge model railway setup in town so off we went.

It is truly massive. This picture covers maybe 1/10th of the entire setup. 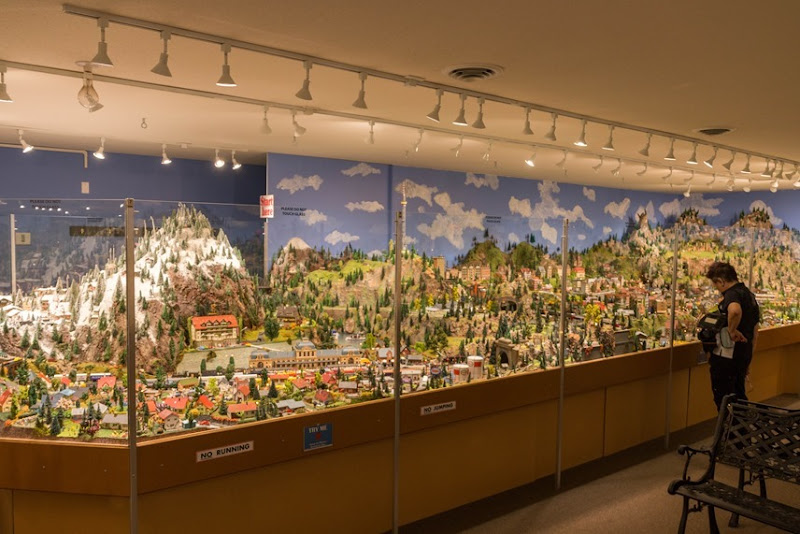 There are 42 computer controlled trains running at all times. The husband handled building the trains and control system. The wife did all of the scenery and hand painted all the figures. The son and the daughter have taken over running the operation now.

I did three photospheres, one in each of the tree main sections. As I said, huge. 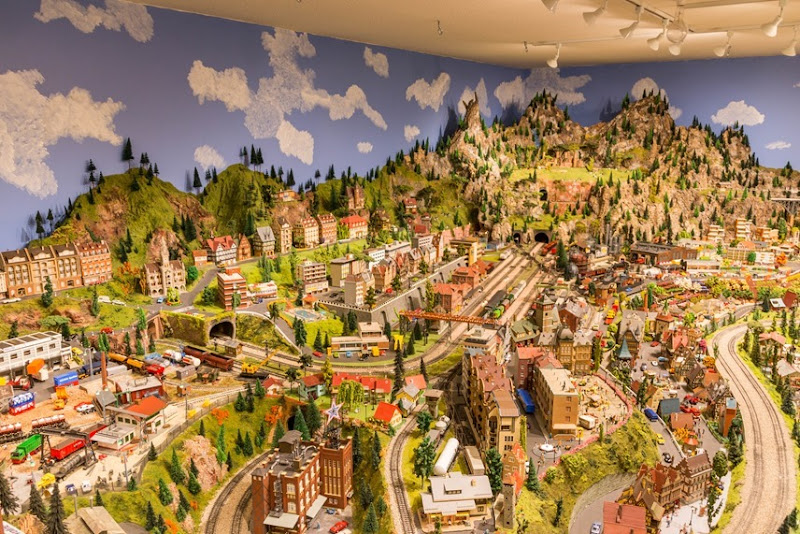 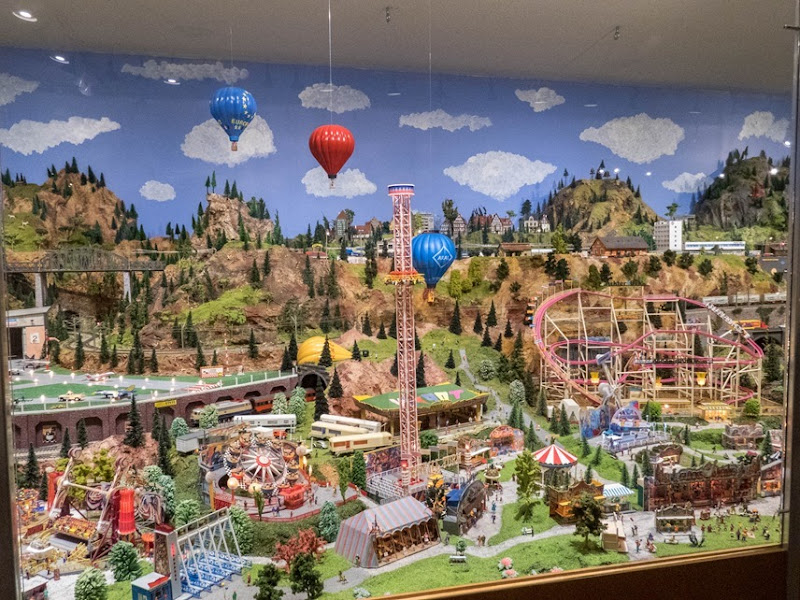 There was so much detail you had to stop and really look closely at each panel of glass. 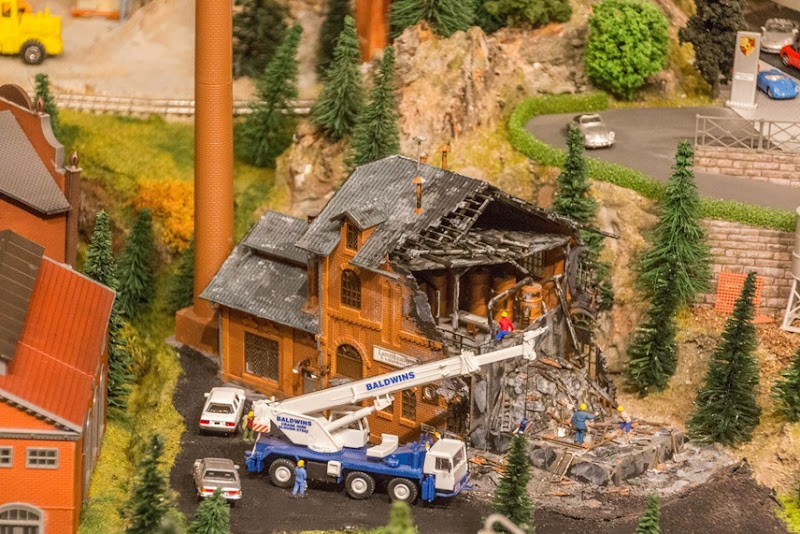 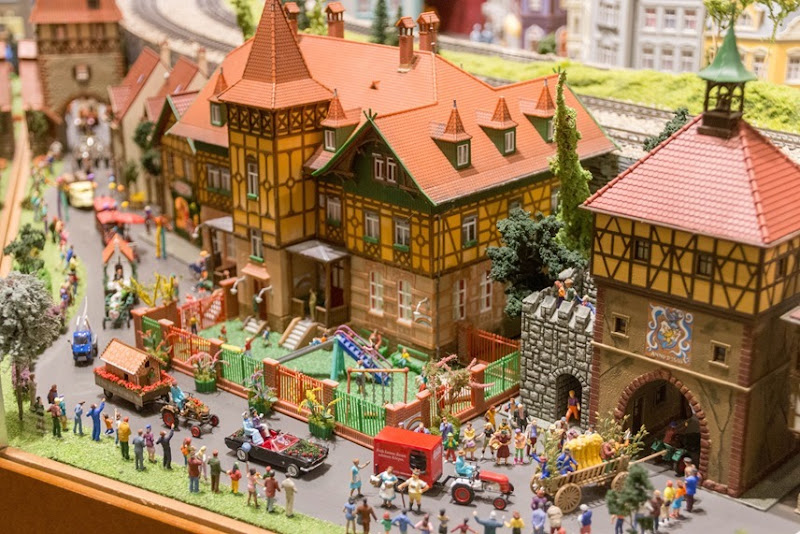 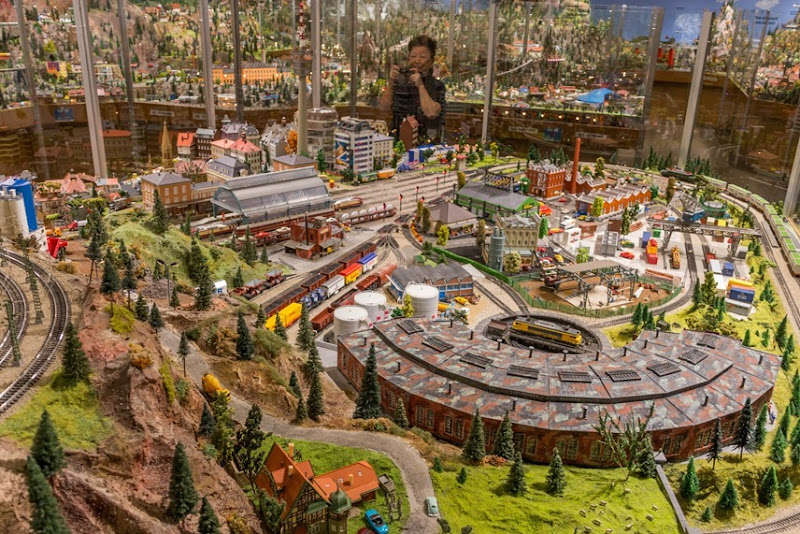 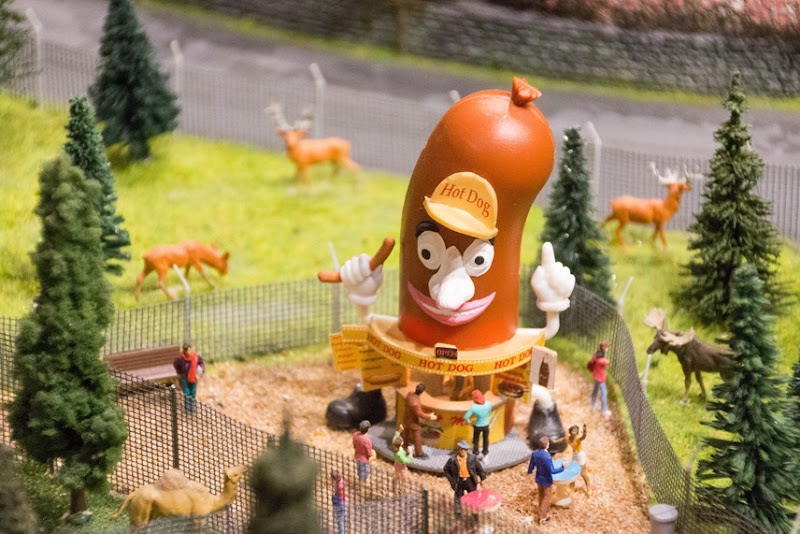 Even a little RV Park. 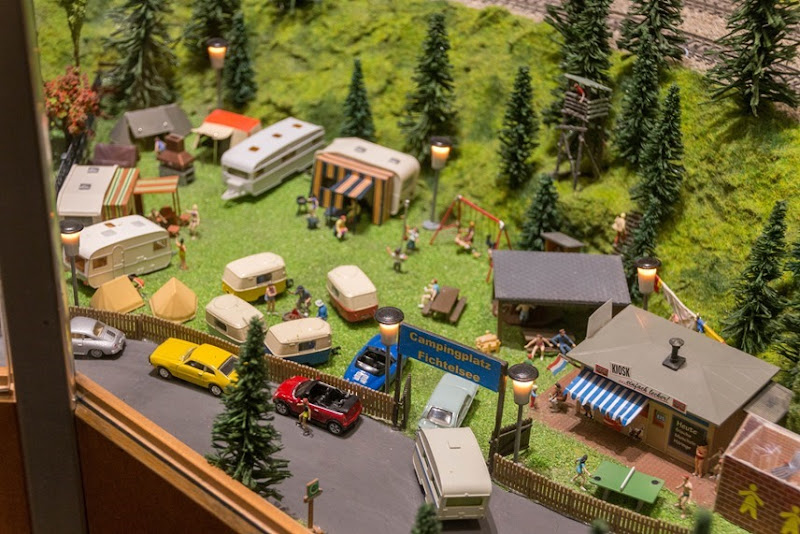 Once a hour they turn the lights down for a few minutes. 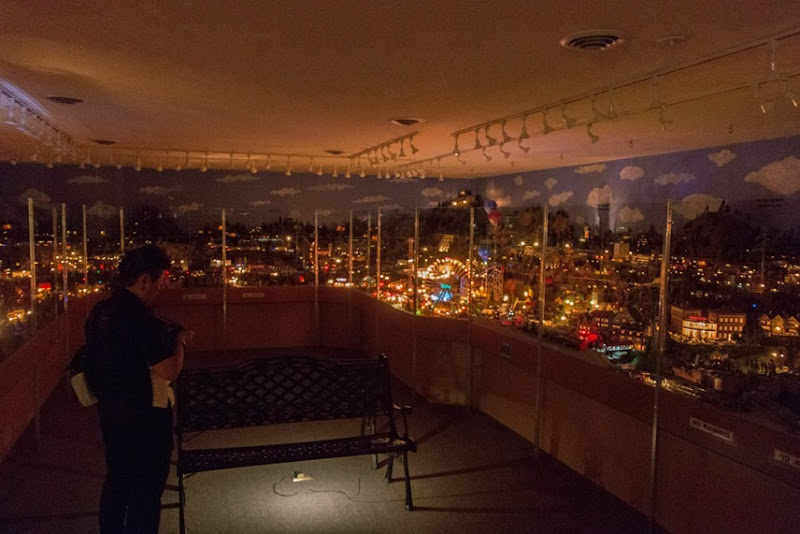 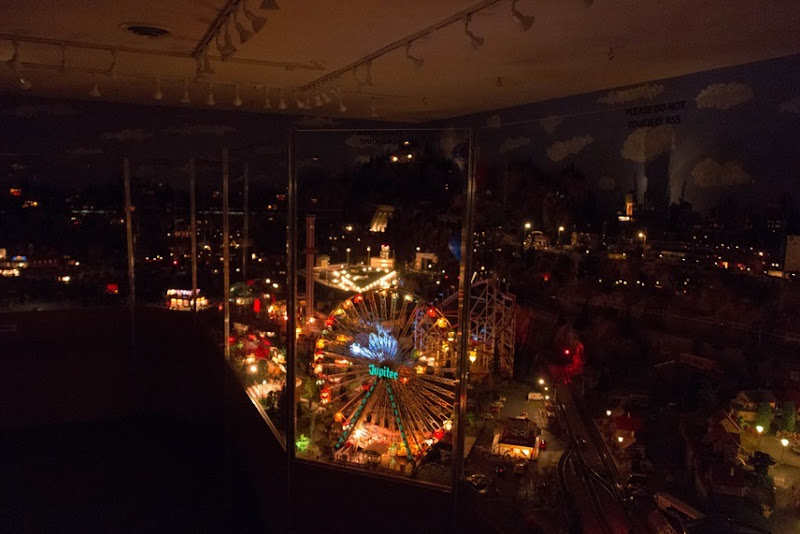 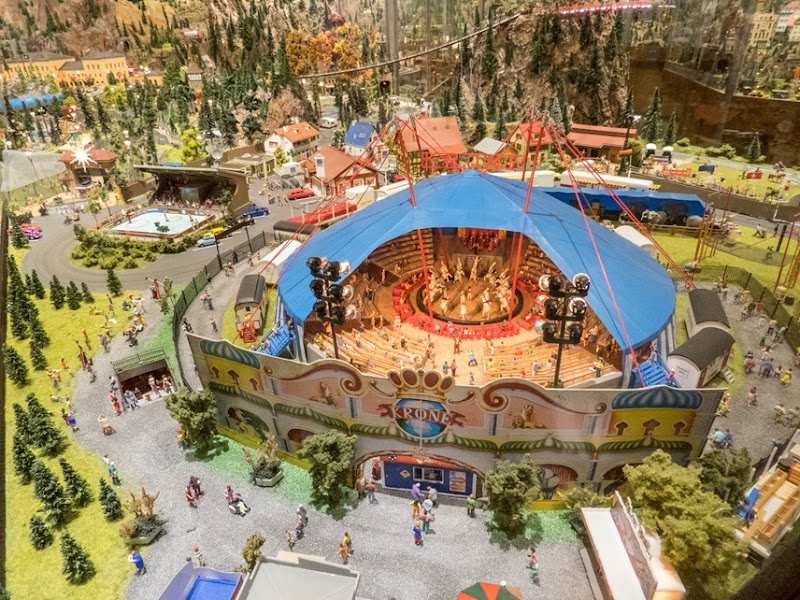 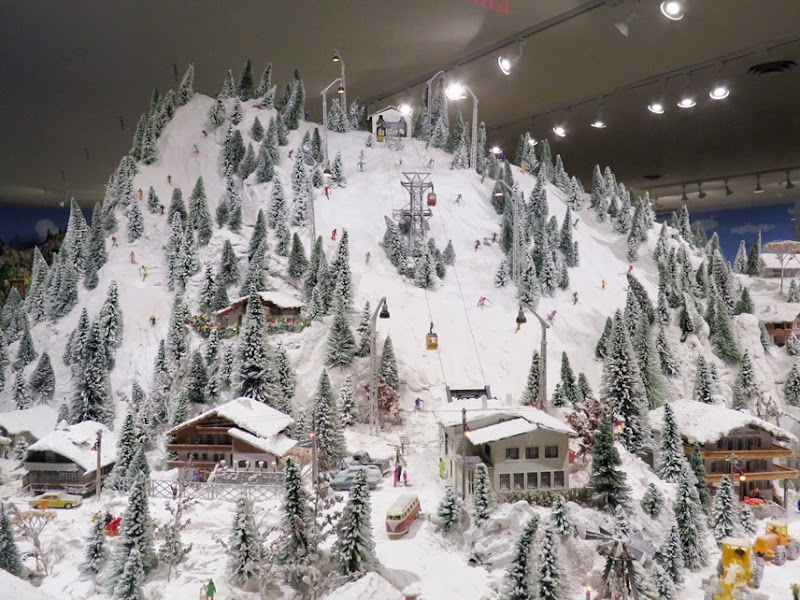 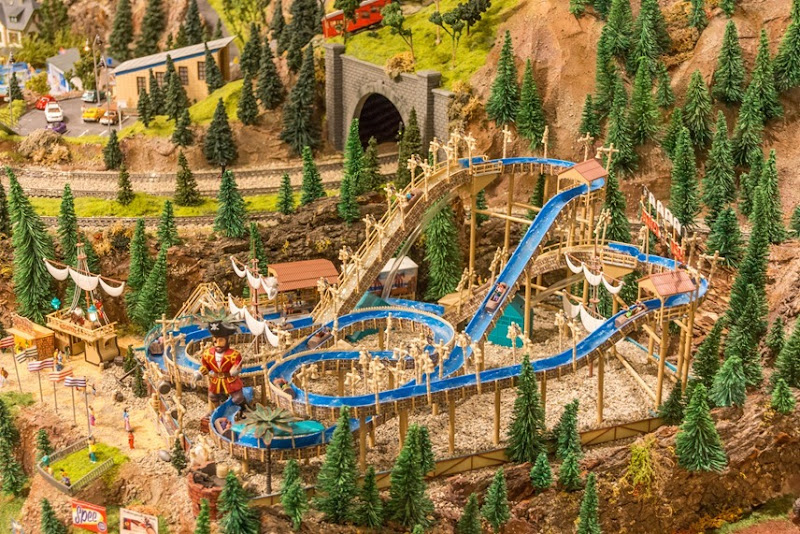 Definitely worth the $8 admission.