We got up early 5:00 am had breakfast and quickly close the few remaining things and left the campsite around 6:00 am, to make sure we arrived by 7:00 at the docks on time to get into a queue where we had reserved a spot on the large vehicle quota to ferry across North Sydney, Nova Scotia to Port Aux Basque Newfoundland. There were lots of vehicles, all sizes and shapes already waiting to catch the ferry too. 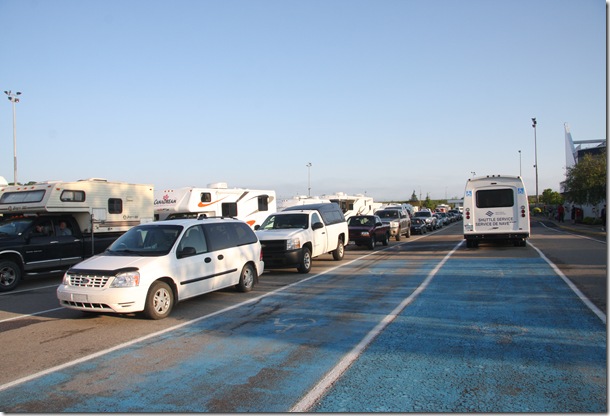 Once we had our spot in line, I went into the Tourist building to get a coffee and pick up some tourist brochures for our destination. I took my laptop and a book (fussed that I might not have enough reading material, silly twit), we packed lunch (as the food would probably be cafeteria stuff and nothing special to waste our money on). Once the ferry was ready to load, passengers were urged to board first by taking the shuttle that would deliver them to their entrance. Next the drivers of the vehicles were asked to return and wait further direction as to when to start their engines and start moving forward. I was a bit nervous as the rows were narrow and some mirrors could have been loosened in transit but fortunately, everyone moved cautiously and carefully without incident.

We were fortunate to be directed to the front of the line onto the ferry. Stuart said that since it was not very busy today, after a week of being booked solid, so we had a lane and a half for our line which was nice, as there is not much room to open the door of the RV on the side to exit. It would be easy to whack someone walking by at the wrong time by opening the door. So, once parked, all occupants of the vehicles are required to leave them and go into the passenger seating lounges of the ferry. 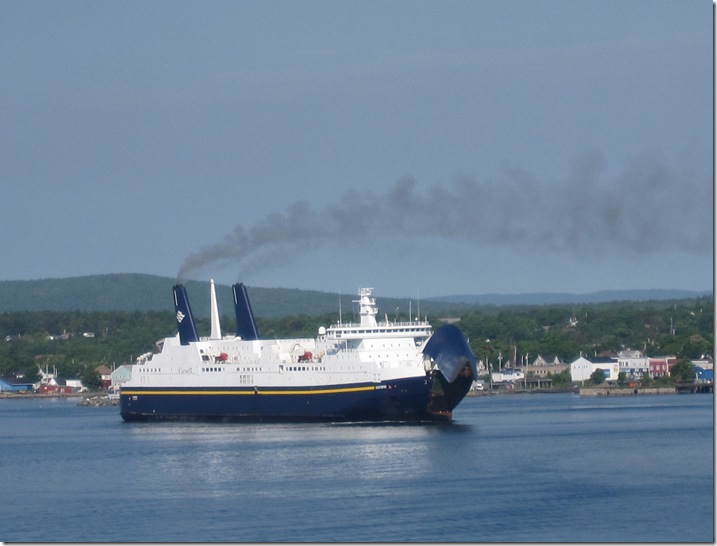 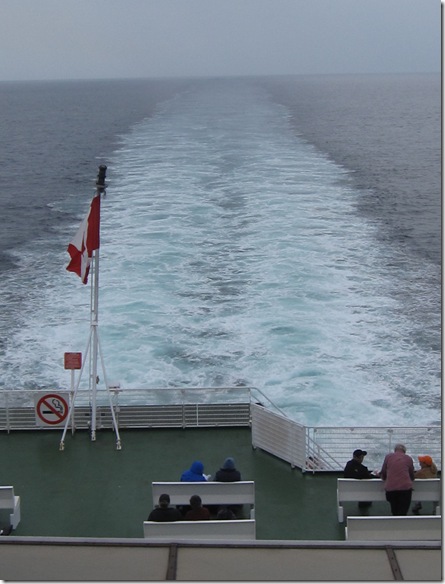 I tried to read and then got hungry. Once we were on the open ocean, Stuart came back from taking pictures and we bought breakfast. I watched a couple of movies in the theater and then I read my book while Stuart closed his weary eyes. As we got close to land, Stuart went off to take more pictures. It is very cold and windy and since I did not bring a headband or ear muffs, I thought it best to stay out of the chill section for fear of getting a head cold. 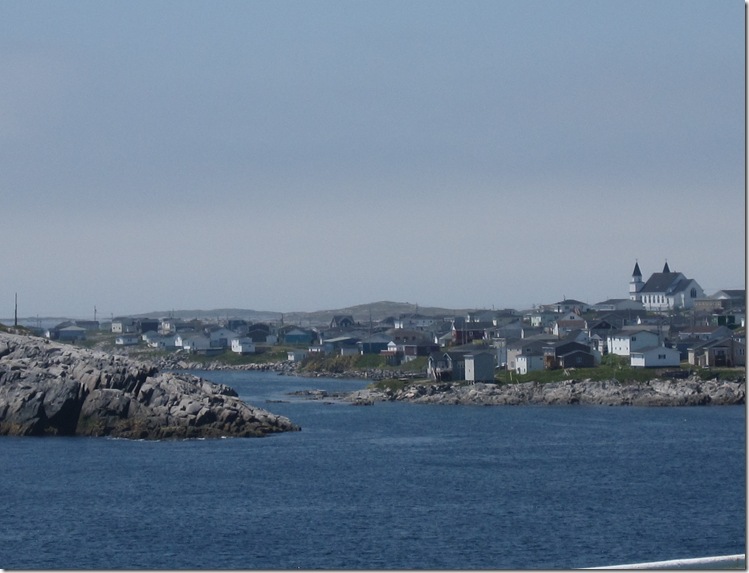 We are called back to our vehicles to prepare for unloading. It is great being at the front watching the sequence of events and knowing that your line will be called soon and you will be the first to drive out. The water travel was around 5 hours and it is another half an hour time zone change. So, it is now 2:00 pm now that we have landed in Newfoundland.

The first thing we did was head into the Tourist Centre for brochures and recommendations on place to see, campgrounds that are special and what to do. Being quick to leave the ferry we are also second in line to speak to a rep. Had we been at the other end of the ferry disembarking, there would have been little room left for us to park, as many of the visitors had RVs of varying size; mostly bigger ones towing things behind like kayaks on cars. I guess staff is used to the waves of visitors, like the tides. I reviewed and signed the guest book. I saw sign-ins from Japan, New Zealand, Missouri, New Brunswick, etc... and quite a few from Ontario.

We are taking the 470 north along the west coast from Port aux Basques to Grand Codroy RV Park of Doyle Road, the first one off the highway in this direction. 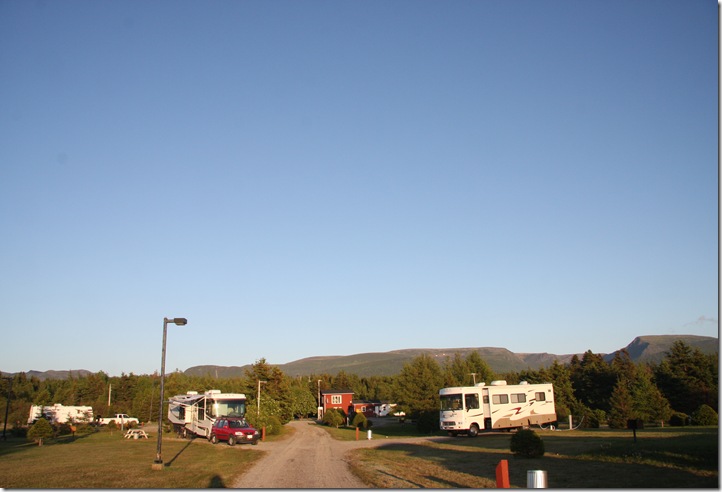 This part of Canada truly has earned its name, “The Rock”. It was a nice day around mid-afternoon and there was thick clouds looming around the caps of some of the peaks. Luckily we are not driving through them today, so it is good for seeing sights. Not having seen much of Canada, I find this scenery novel; where one drives up to the top of a mountain looks around and sees water (sometimes ponds, marshes, pools or the ocean); then cruises down to sea level and sees vast expanses of water.