Today the temperature is 70 C, which is quite cold with the fog and winds. We headed to L’Anse Aux Meadows National Historical site. Unfortunately they were building a new visitors center and it was not complete yet. To make up for this admission was free, except that we already had bought an annual pass. We headed down to the actual site for a guided tour by a Park Ranger of the ruins. This is what it looks like. 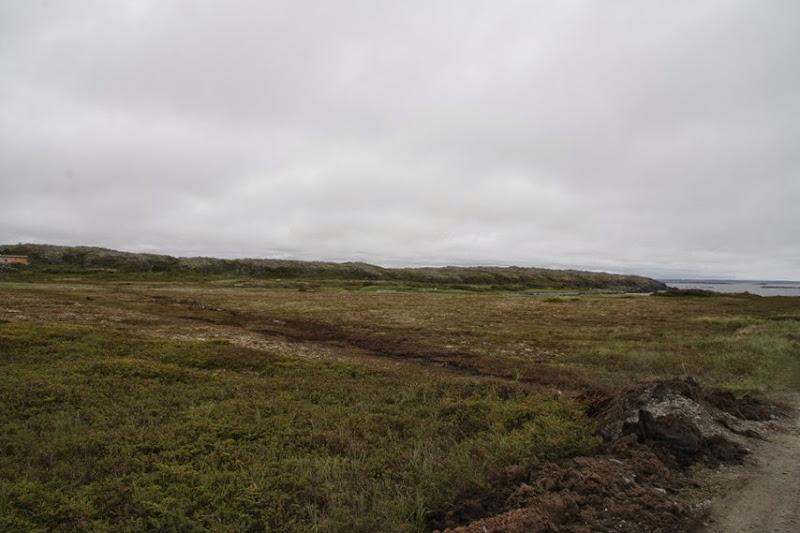 You really had to use your imagination as she explained that what laid beneath the contours of the surface was the home of Leif Erikson who was the first to land on the shores of Newfoundland. The outline of the perimeter showed that there were 3 rooms, plus a workshop with only 3 walls. The captain had private quarters and could bring his wife along on the journey if he so desired; sometimes the navigator brought his wife too. She explained how they determined the function of each room a bit of history of the period. For example, they were capable of forging metals, used wood mostly, and the type of wood explained the origin of the item.

It was too cold to stand around just listening, instead of walking and moving to keep warm so we went to re-creation village they had built nearby. 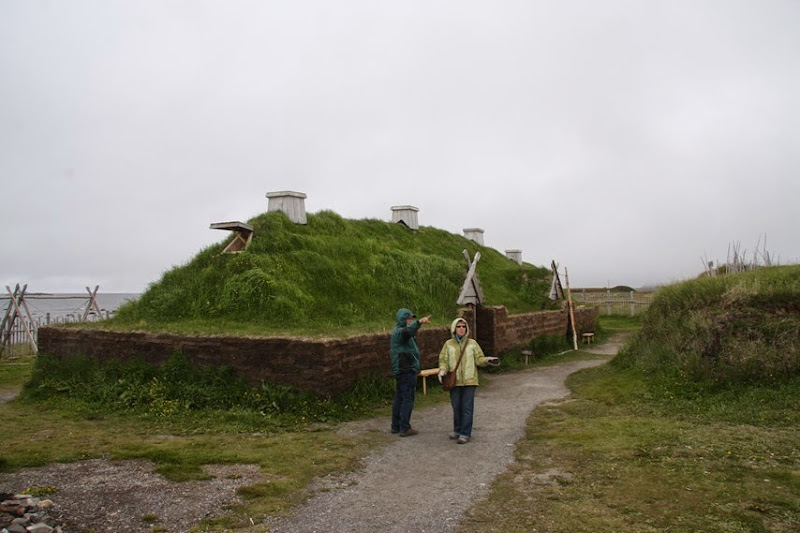 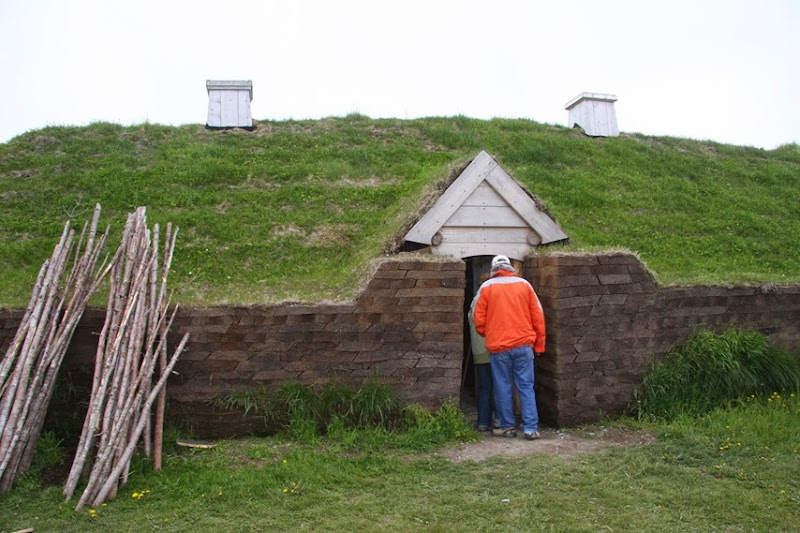 We looked inside the “house” with was built into the earth and the exterior was made of sod cut into bricks and totally covered by grass. The structure took advantage of the protection offered by the landscape, in the form of camouflage and economized on the use of wood, as it was used only for interior and not necessary for the exterior. There were no windows but there were hatches in the ceiling for ventilation and lighting during the daylight. 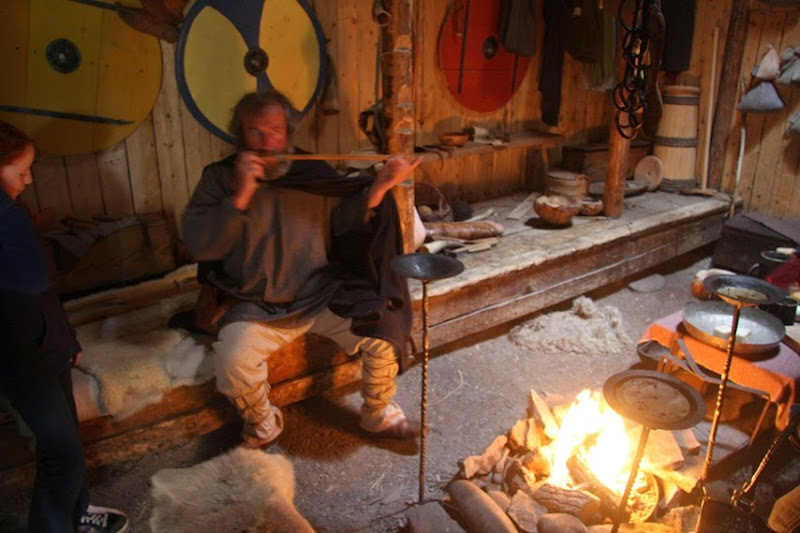 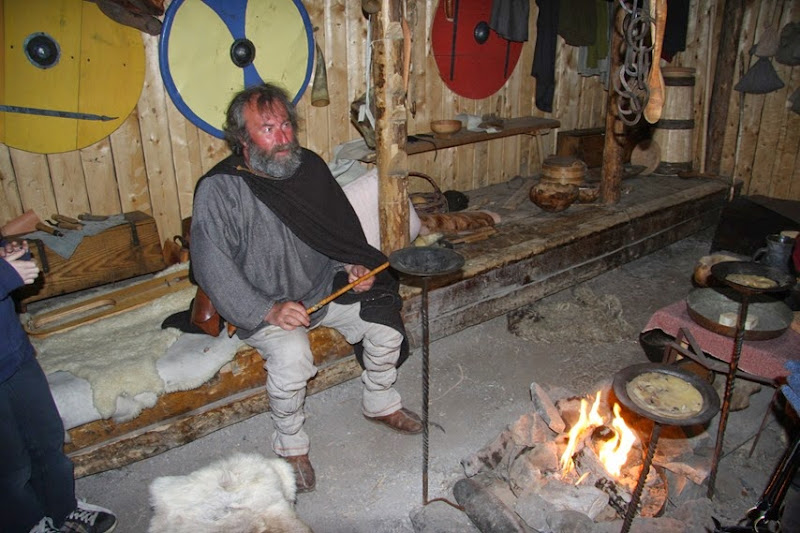 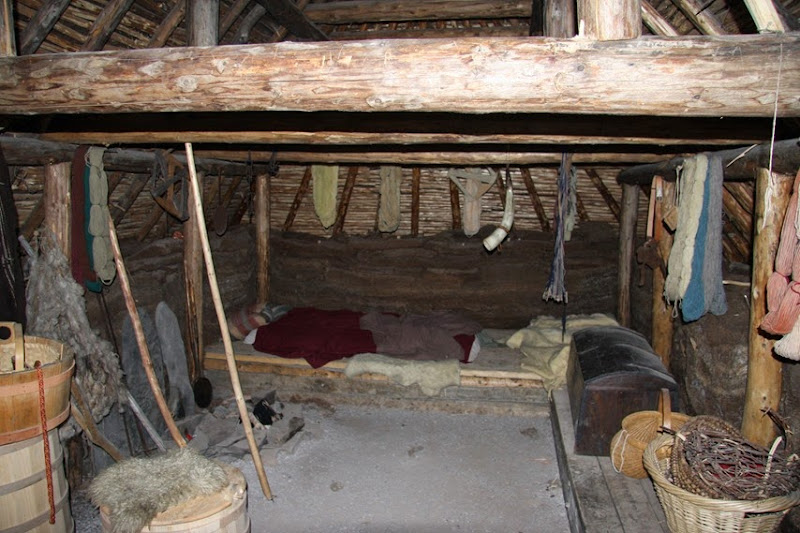 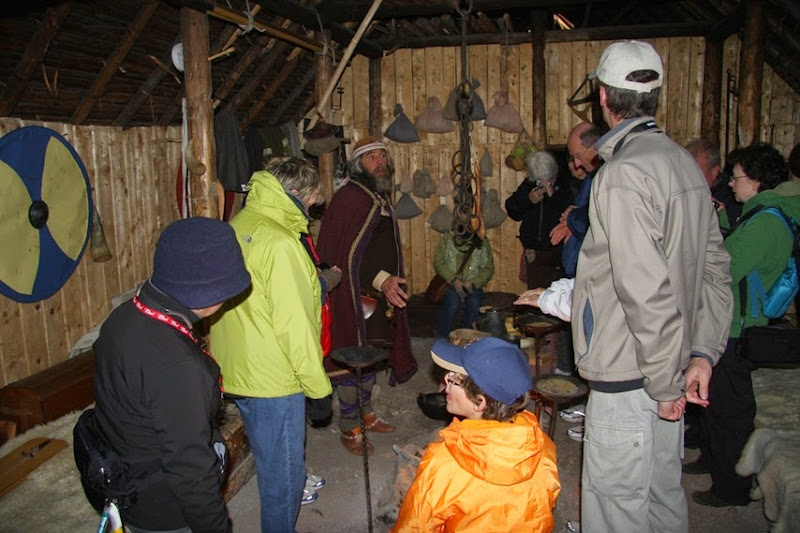 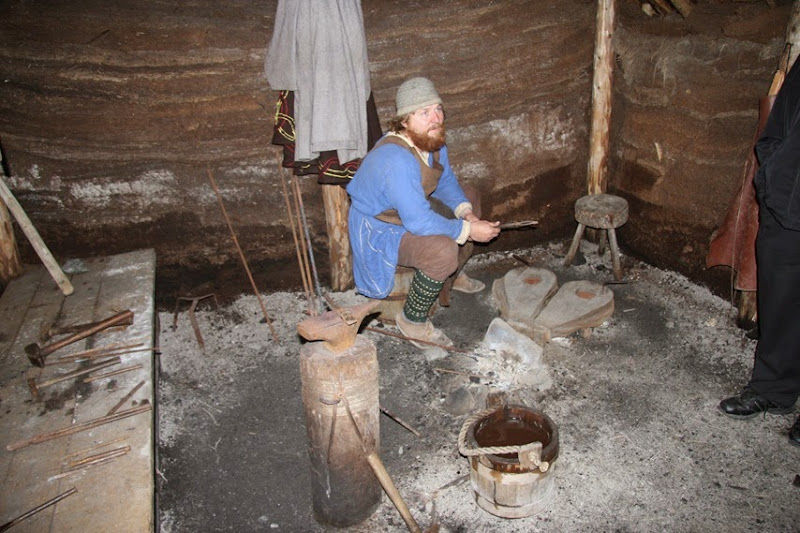 After lunch we literally went just across the road to Norstead which is a privately owned replica of a Viking Village and Port of Trade. 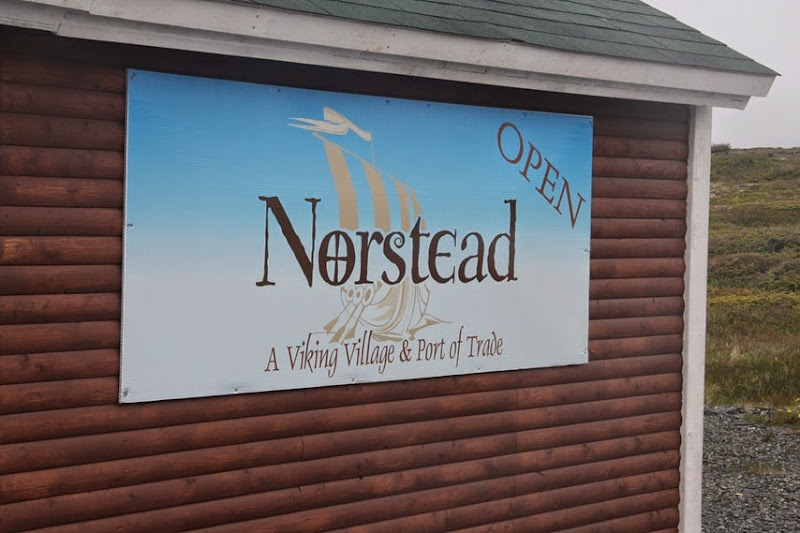 There were people dressed in period costume portraying various members of the community, like a woman who weaved on a loom and did one needle knitting (like sewing with a needle and thread and using your thumb as the other knitting needle). 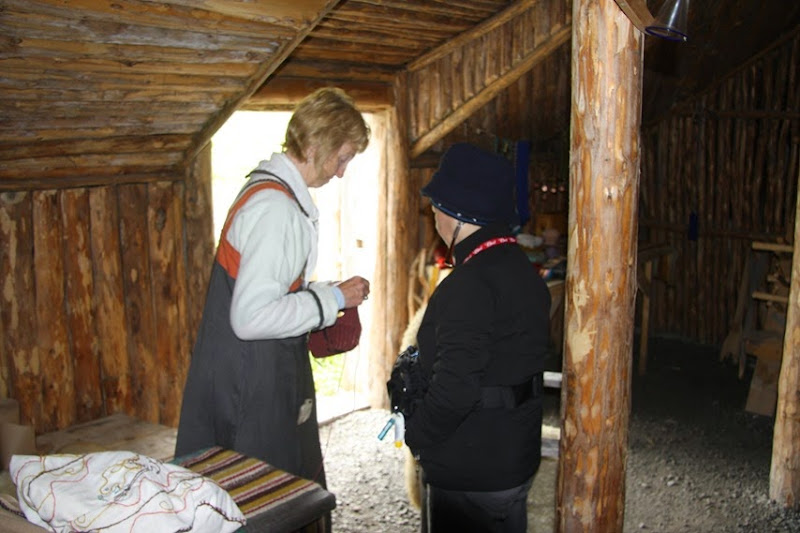 Jennie had to try the throne. 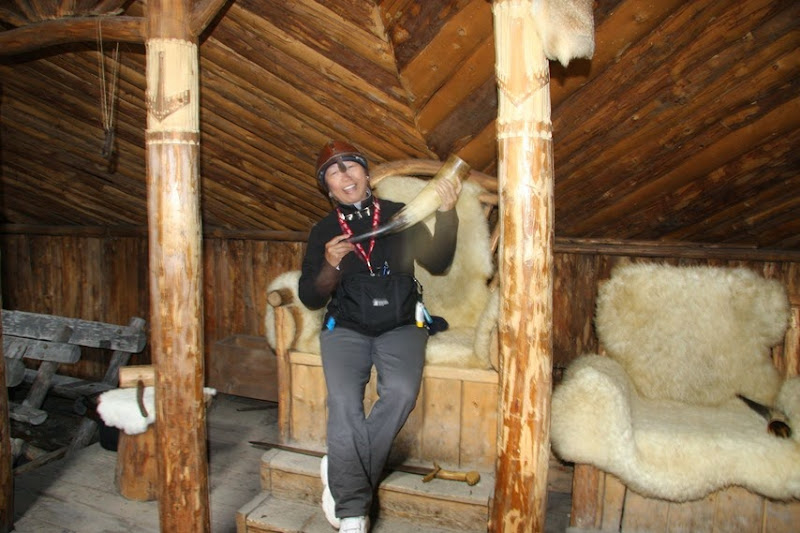 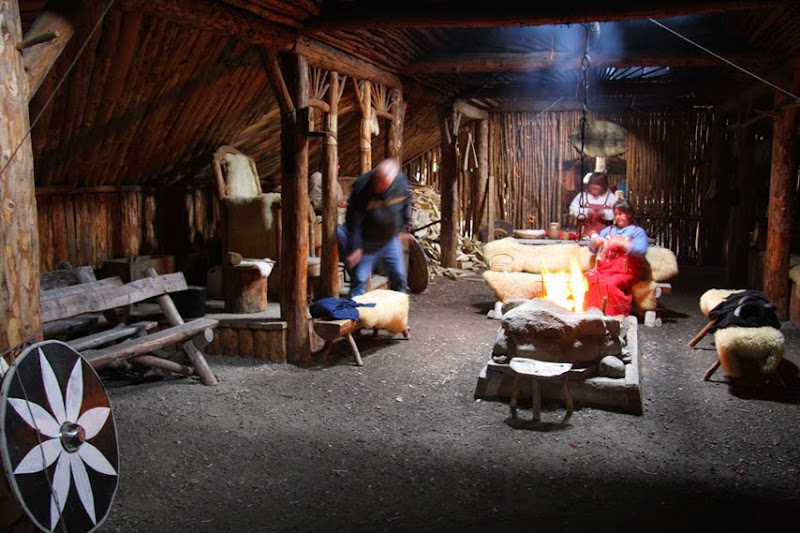 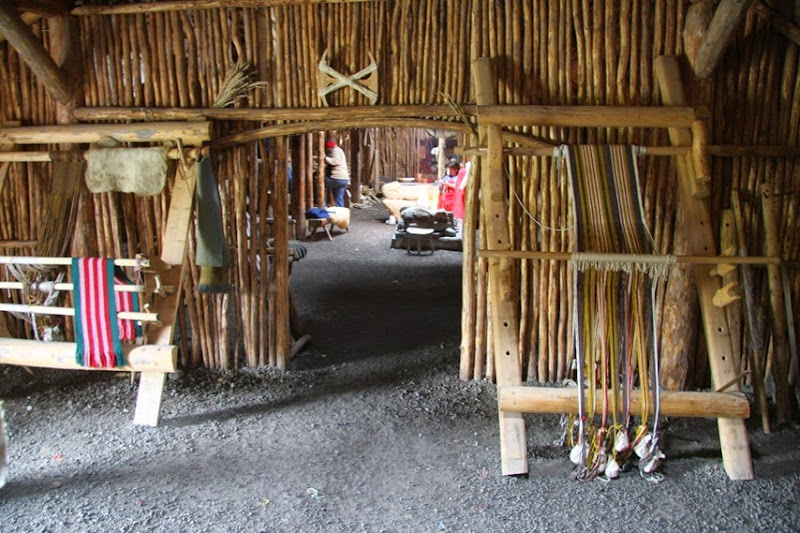 A blacksmith showed us how to use the bellows to heat up minerals and scraps to make nails. 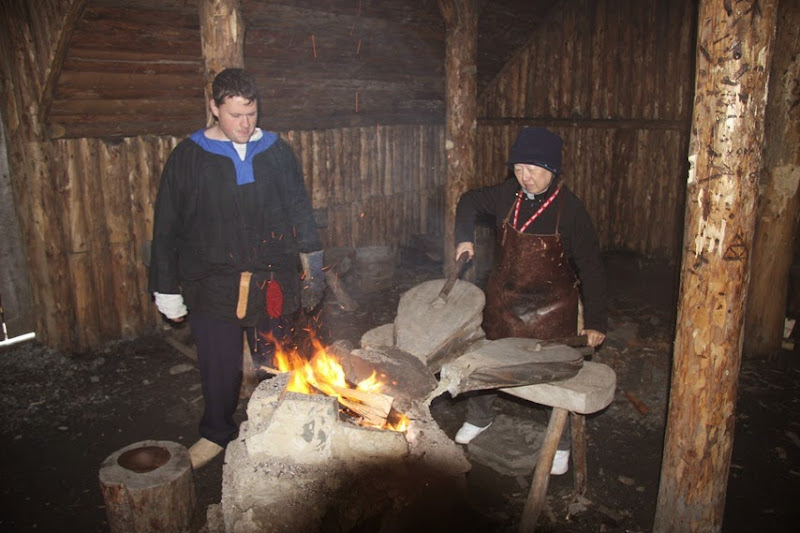 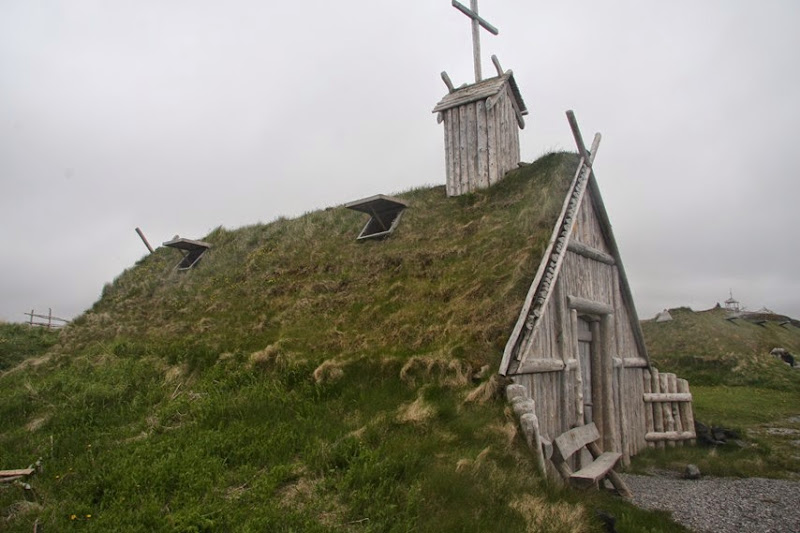 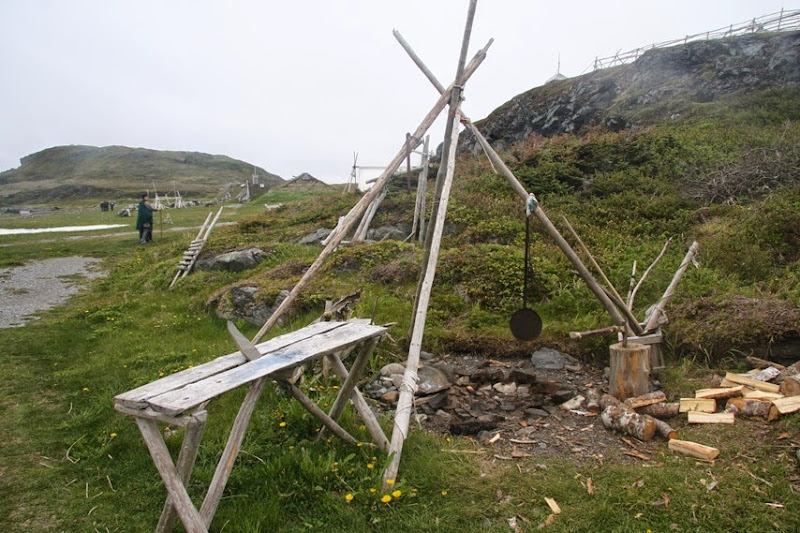 A ship builder told us how the boat was made with carved oak on the bottom for sturdiness, pine on the side for more flexibility, stuffed with bits of wool & leather soaked in animal grease in the crevices, then the whole ship was painted with tree sap and oil for waterproofing. 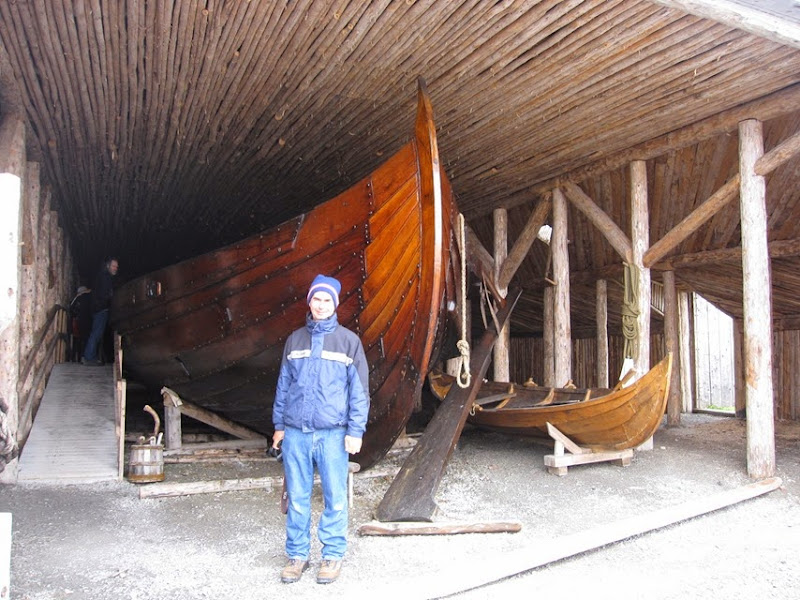 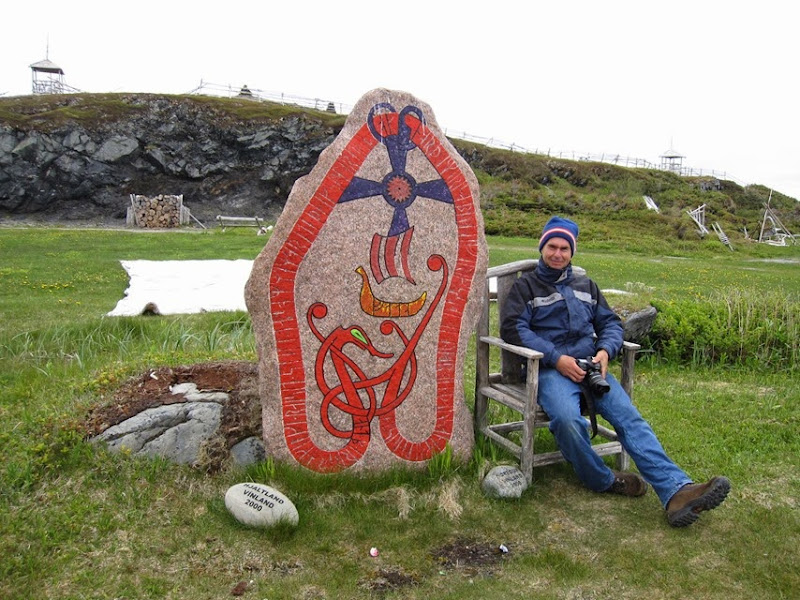 We listened to a man in the main structure talk about life expectancy back then and how the smoke from the fires impacted their health, especially the women who spent most of their time inside. The village had a church which was Christian, despite the residual belief in paganism and folklore. Stuart and I tried our hand at axe throwing and I could not get my throws to stick and S did get one good shot. It is not as easy as it looks. 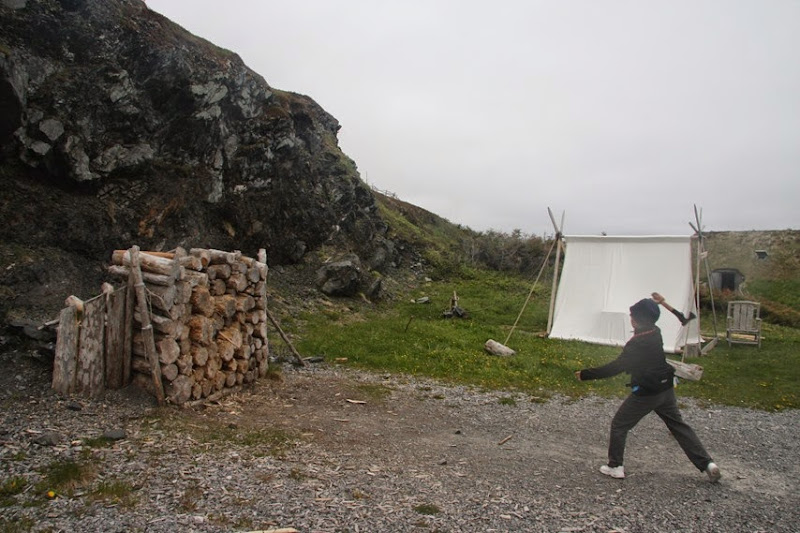 It was around 2:20 when we arrived at Burnt Cape Ecological Centre for a tour of the flowers. The guide had said there were no takers for the 2:00 pm but if we wanted to go, she would take us. Not knowing the setup, we were hesitant to ask her to take just the two of us. Another couple from the UK, agreed to take an abbreviated tour, ($5 each), so she loaded us into her van and drove us up some rock area, pointing out sights along the way. By this time of the day, it was getting colder, foggier and with the chill, around 20. 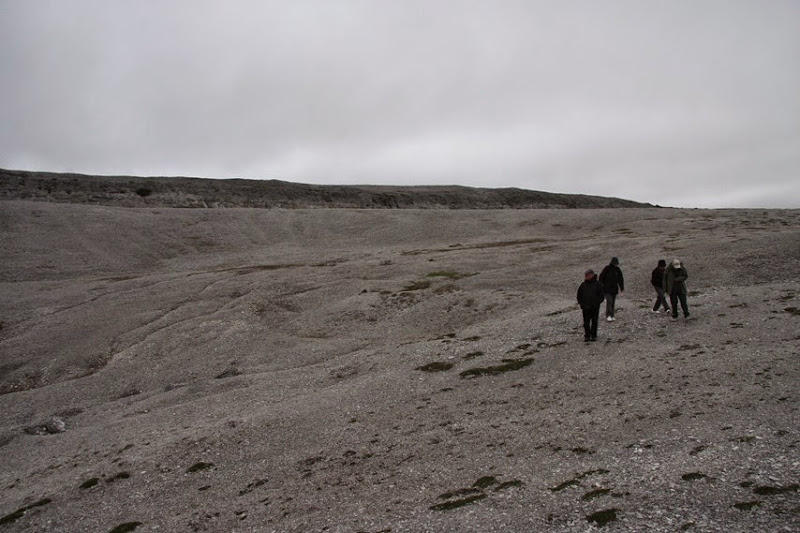 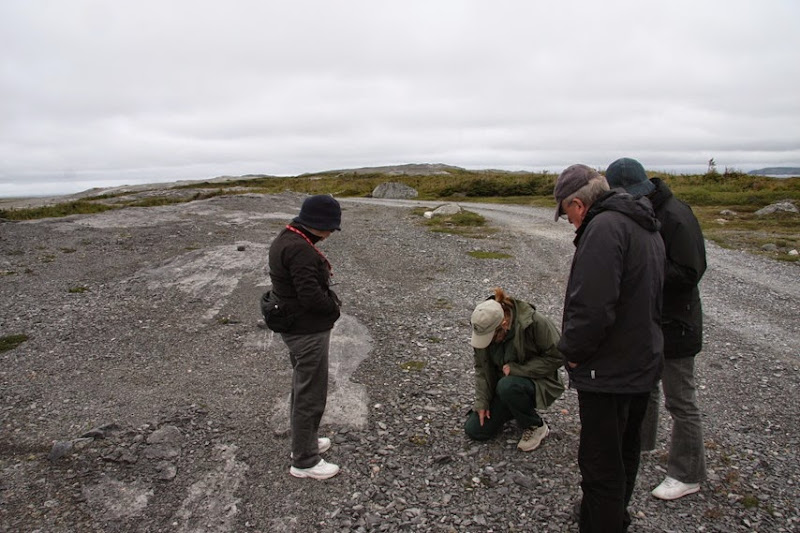 Our guide was very knowledgeable about the small plants and flowers. It was mind-boggling how many plants are around us. At first sight, the rock looked barren but she says everything is low to the ground and smaller than commercial plants. With the short warm period and the harsh conditions, each plant has to flower quickly and propagate soon. They like the conditions as there is little competition and they flourish. She rapped off the usual ones that we have seen in many other places around Gros Morne, like dwarf birch, juniper or larch, potentilla, lady slippers, moss campion, cinq foil, butterwort that has a star shaped base leaf and a little mauve flower, mountain avens, bunchberry, etc. 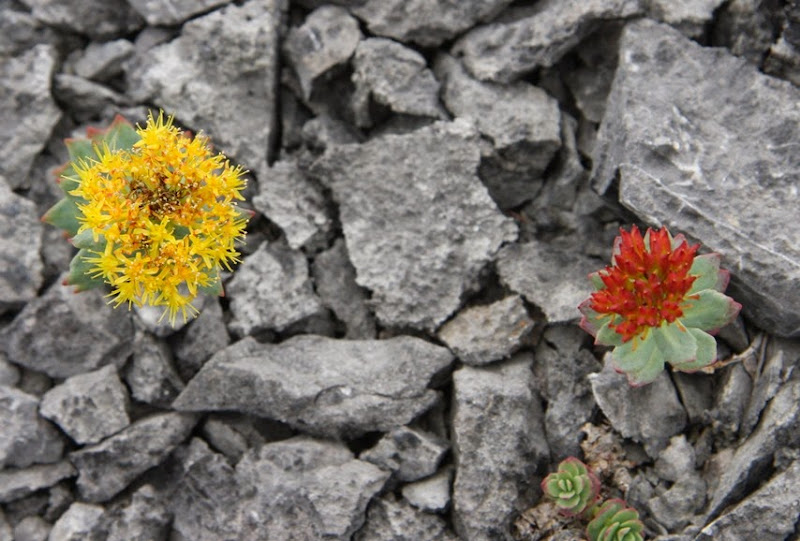 A very flat tree, to stay out of the vicious winds. 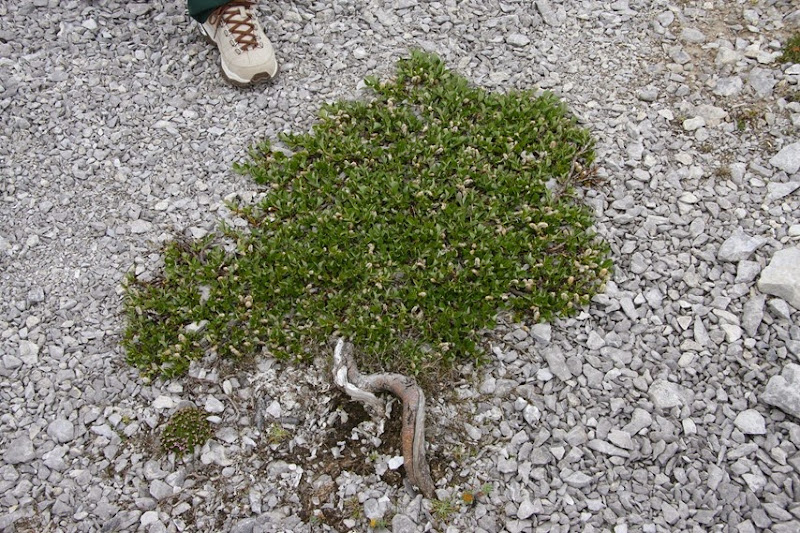 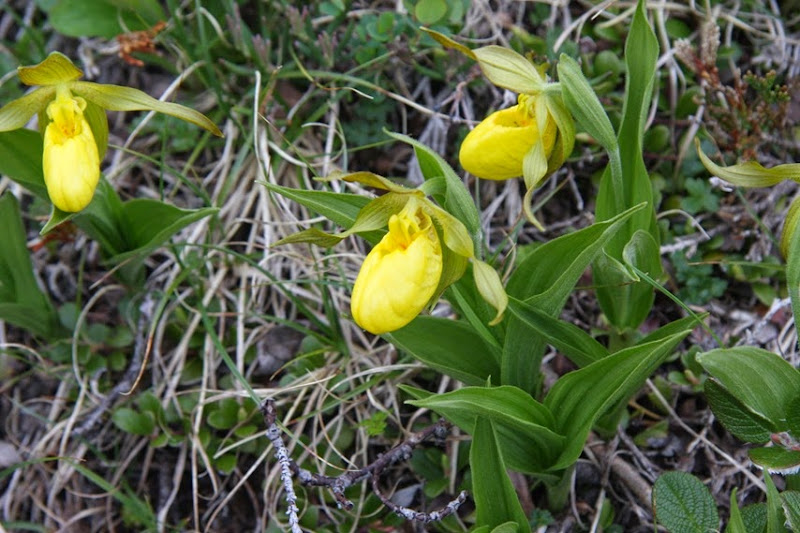 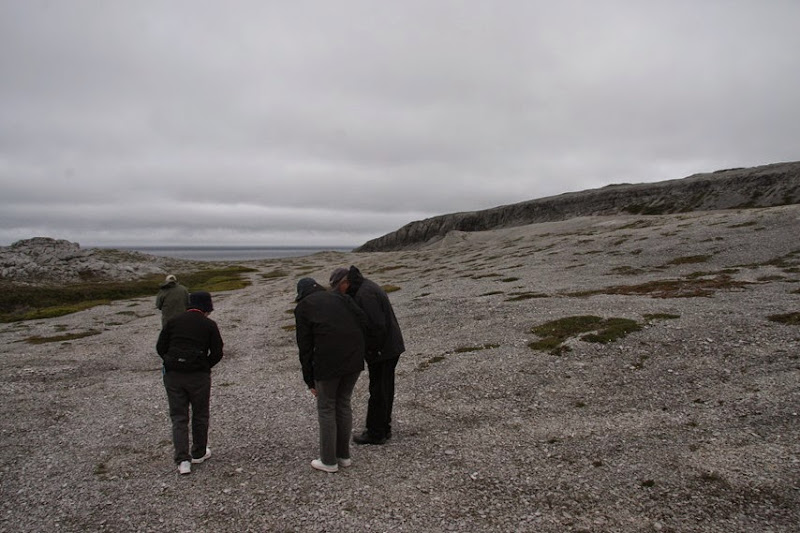 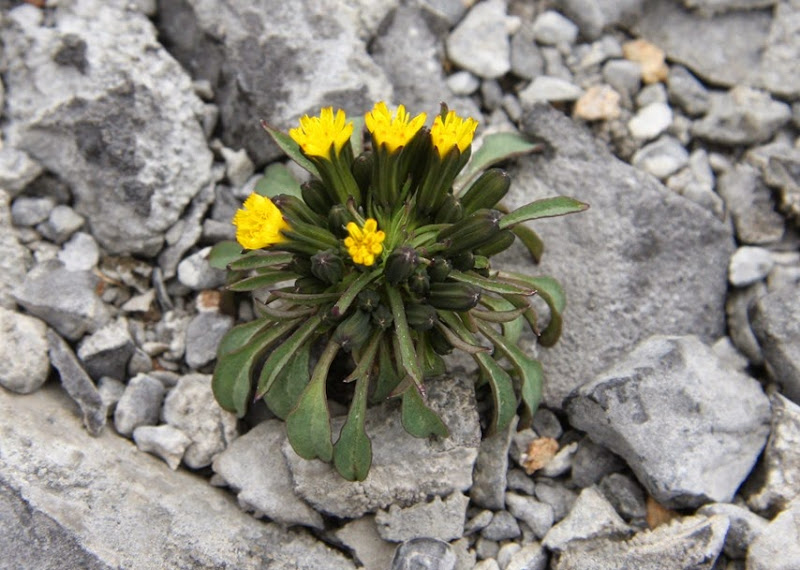 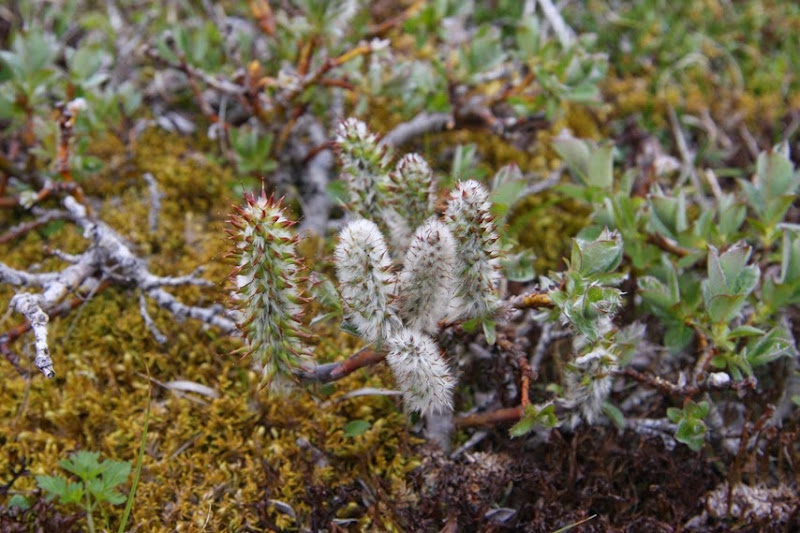 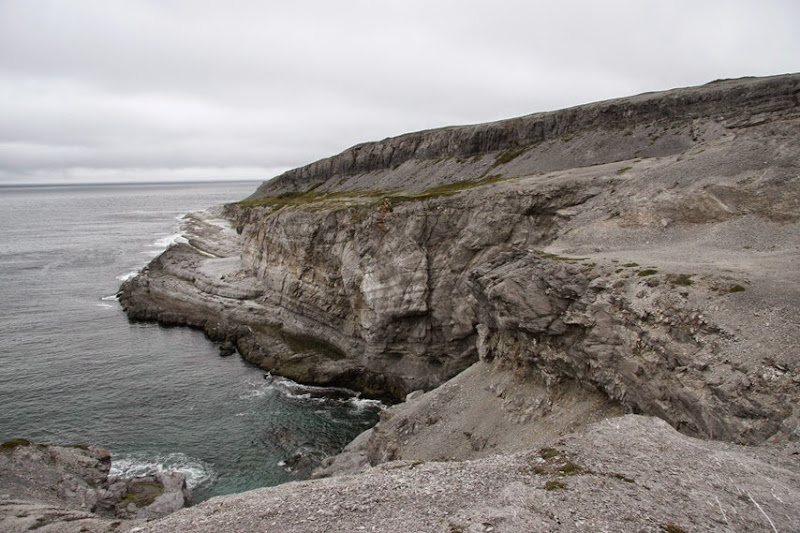 It was around 4:00 pm when we got back so we decided to call it a day. 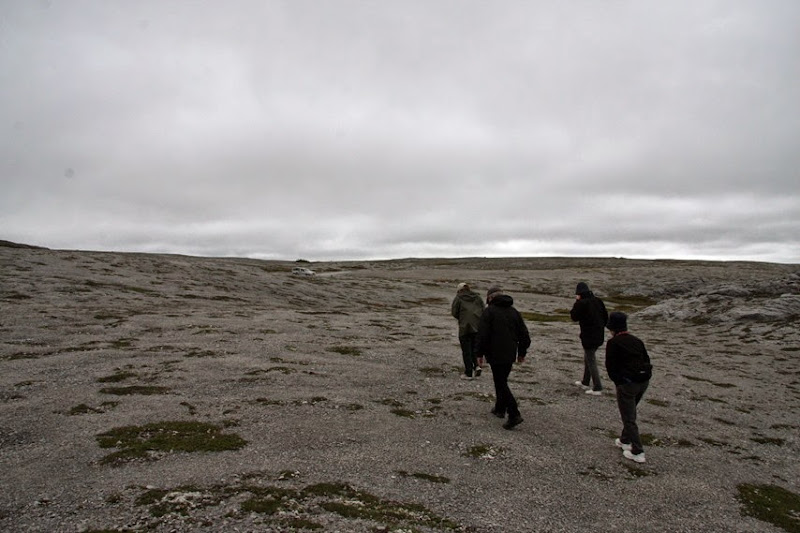