We got up early again, as we have not adjusted to the time difference yet. It gave us plenty of time to pack our belongs and prepare for the next city on the agenda which involves a local flight.

We were picked up at the hotel around 8ish, in the morning. The flight was not until 10:30 am but who can tell how long it will take with traffic and obstacles. We arrived at the airport with plenty of time to spare and checked in. Our seat assignments were together this time, so we went to our gate, found a seat to rest in and read until called to board the plane.

The man seated in the window seat spread out into my seat, making it uncomfortable and difficult to relax. Then when he fell asleep and snored most of the flight, I was irritated but what can you do? The meal was small and the flight was a short 2 hour ride.

It was 12:30 when we arrived and were greeted at the airport by Melanie, the next guide on the tour for Xian. She was easier to understand than Robert and she was not as exhausted or uncertain. Melanie appears to be experienced and goes about securing the activities forcefully. When we collected our bags, she lead us to the restaurant at the airport, thinking that we would be hungry but weren’t.

After lunch, at the airport restaurant where the meal was unappetizing, we met our second driver, Mr. Fung, who had the same manner of dress as the last fellow, polo shirt and dress slacks, except he is fastidious about his vehicle and is insistent on opening the door and helping me into the car. He wears white gloves to drive, like it is a part of the protocol and it shows that his Korean minivan is well-cared for. 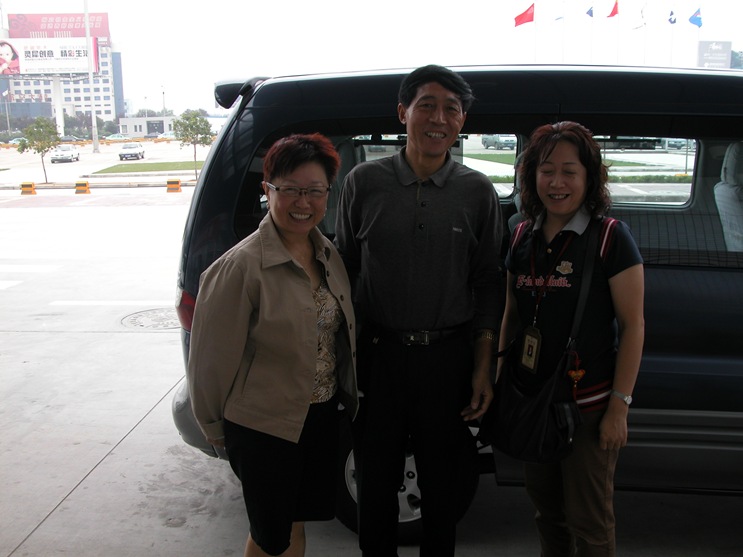 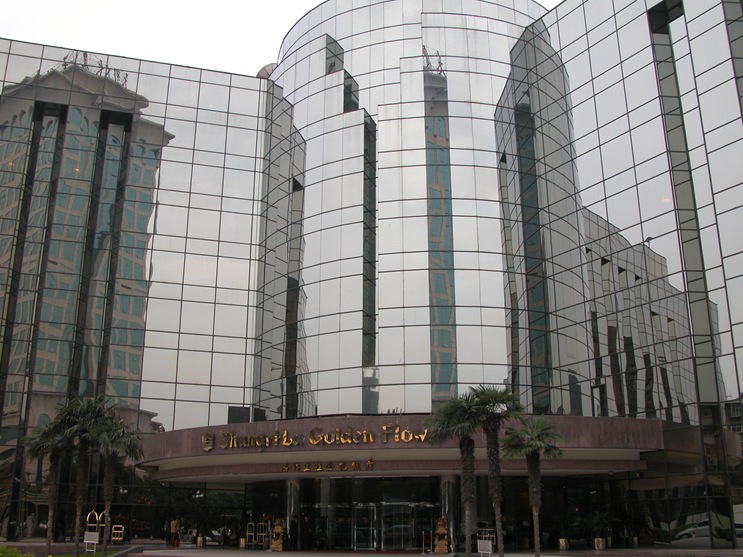 We were supposed to be driven to the hotel for free time to recuperate but the hotel did not have our rooms ready yet, so Melanie suggested we go to a museum, which was slated for the last day in Xian. In retrospect, it would have been better to have the free time in the beginning to study the map and figure out what extra things we wanted, like a night tour of the city to see the lights at the South Gate entrance, the Bell and Drum Tower which look quite different in the day versus at night. We could have thought about when the best time to ask for a short stop at a shopping mall to get a few things. It would have saved us a bit of cash and stress with Melanie & Mr. Fung. I just did not know enough about what I want to see and do in this quaint former capital of China before Beijing superseded it. 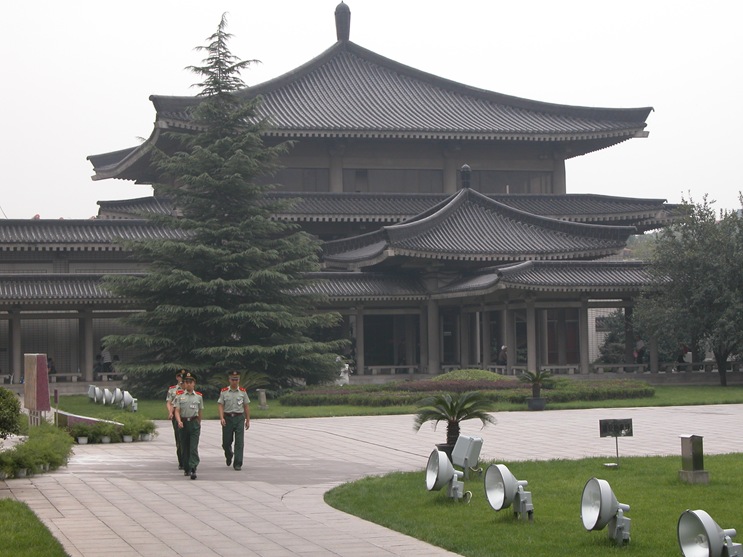 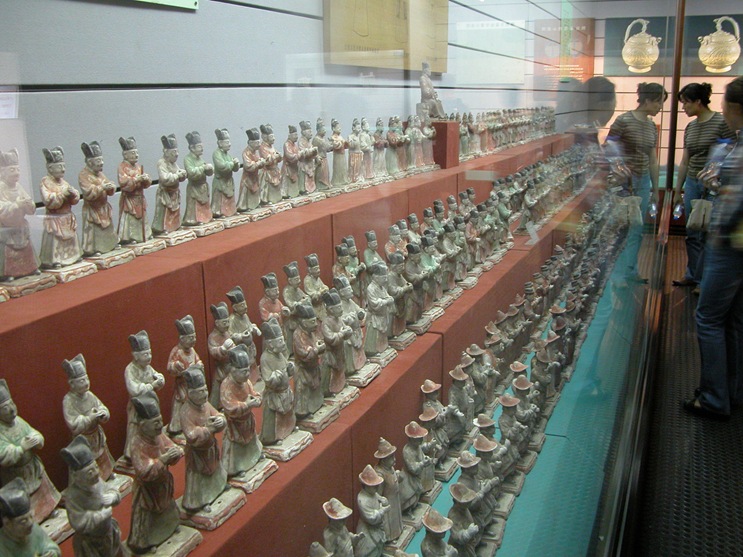 Xian area is noted for its tomb burial sites because with a mountain with Jade and Gold veins on one side and a lake on the other, Emperors say that it had good Feng Shui. This city is not as industrialized, crowded or busy as Beijing. Since we were not in the heart of the city, there was more night life around the hotel. We are situated just outside the four walls that surround the core. We were driven around the city and were able to view how quickly the city is being established. Everywhere there is construction. It is good to see that they are planting shrubs, trees and all manner of vegetation everywhere to help beautiful as well as absorb the pollution from manufacturing and the massive number of cars and motorized vehicles moving around.

We had a fascinating trip through history following the evolution of pottery from blobs of mud shaped into rudimentary pots, vessels and vases, gradually becoming more ornate in colour, glazing techniques and shapes. As the civilization evolves, weapons and jewelry and other uses appear as artifacts discovered over time. I am curious as how metals are discovered and become substituted into the weapons, currency and jewelry applications.

After a few hours, it becomes brain overload and I cannot appear interested anymore in what is on display. Two hours steeped in the history of China, made me feel like a cold cup of day old tea. It is time to leave the museum and we tell our guide this so we head to the hotel for a rest around 4:00 pm. Melanie said that she would be back at 6:00 to take us to a special Dumpling Restaurant meal. Since we are not acclimatized yet, and my brain is swimming in facts and historical detail, the moment my head hit the bed, I was out cold. Unfortunately, we did not set the alarm and overslept. Melanie has to call our room and remind us to come down.

It is not like us to be late, but since we are still on Canadian time and waking up at 3 or 4 am, we are passing out early too. We are driven to a noted restaurant, Defachang Dumpling Restaurant, for dinner. It is a busy establishment with many tour groups and other patrons crowding into the large second story premise. Melanie secures us a table quickly but Stuart does not like the location, by the stairs and on the outskirts. He feels like we are being cast to the peanut gallery. Another guide quickly scoops up the two person table for her foreign tourists. Melanie got another table more in the middle of the  and things were bustling there. Once the appetizers come, some cold veggies and stuff, there is a pause before the rush of little dumplings are place at our table. 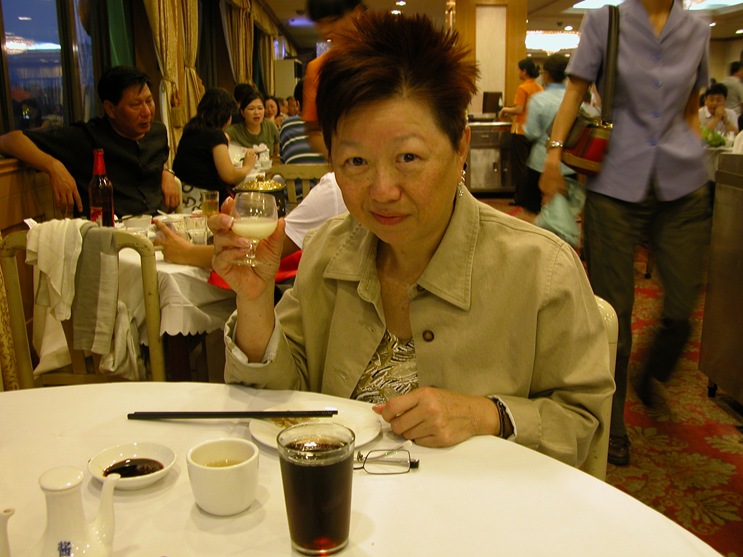 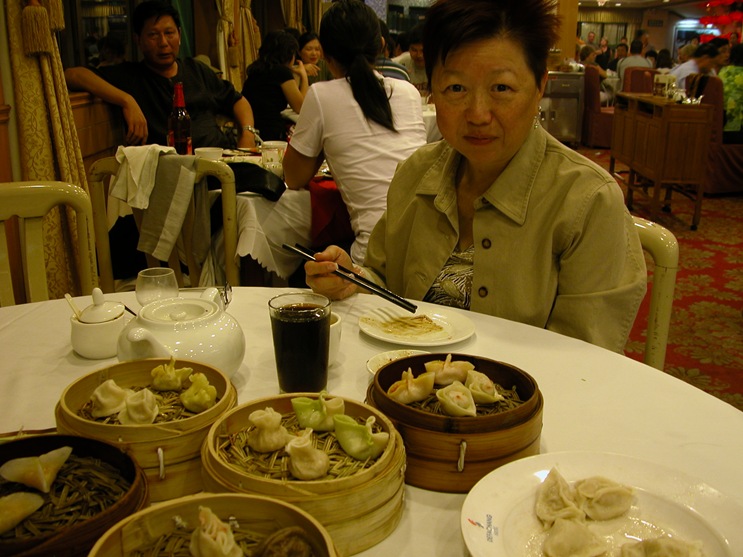 I cannot remember how many, as I thought there were 7 different types 2 of each in the steam baskets, plus one large plate of perogie looking dumplings. As we were about to polish off the last one, another bunch of steam baskets came alone. Some of the delicacies were shaped like a phoenix, like swans, chickens, and heaven knows what other type of creatures. It was such a blur now.

On the way back to our hotel we asked to be driven around the city a bit. It was too bad there was not enough time to stop and look. 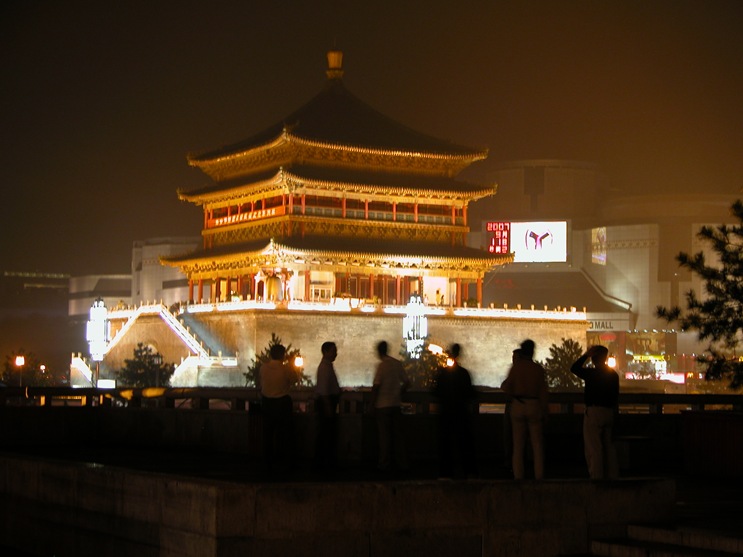 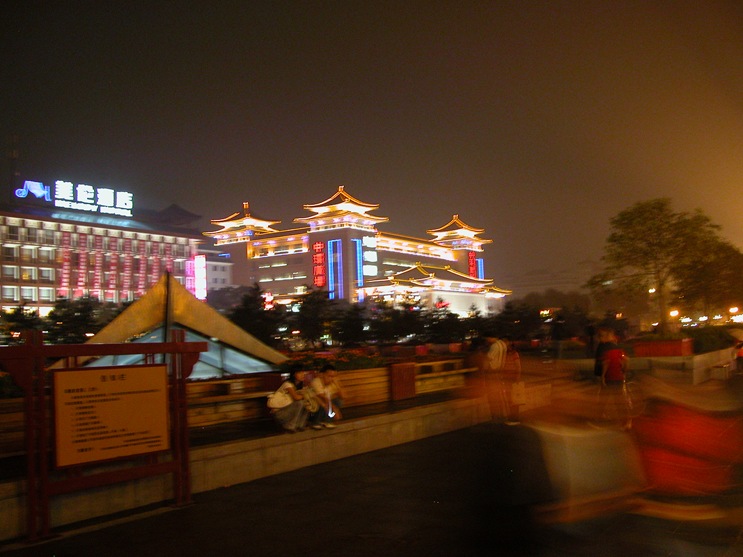 We were still tired, not quite 100% yet so we went back to our hotel. I wanted to make use of the facilities, like the pool and exercise room. We ended up using the hot tub which is not as hot as ours. There was nobody else in the beginning and eventually another man came in to swim. We went in to change and I noticed the sauna was on and ready to go, so I sat in it hoping to easy the neck pain that started two months ago. I should have booked a reflexology session @ $12 US and 18 for a 30 minute massage in the style of your choice, i.e. Swedish, Thai, Japanese, etc. I was tired so we went to bed and slept right away.

We are able to sleep for longer periods but still waking up early, like 4:00 am in the morning. The hotel provides breakfast buffet starting at 6:00 am, so we get up, do a little packing and preparing. By 6:30 am, we go down for breakfast. The spread in this hotel is not as good, despite being a 5 star rating. It is slightly lower quality in every way starting from the bathrobe quality, slippers are thinner soles with open toes, bath towels not as big, cheaper pens, desk set, no hole punch, paper clips etc. It was a step down but still a 5 star.