We met Wendy at 8:45 am for the drive to the docks by 10:00 am for the 4 hour boat cruise along the Li River to Yangshuo. It is a very hot and muggy day. We were concern as the forecast was for rain. It was foggy and a bit overcast, dull for our pictures to capture the hills or mountains in the distance.

It is a very popular cruise as the line of boats seemed endless. 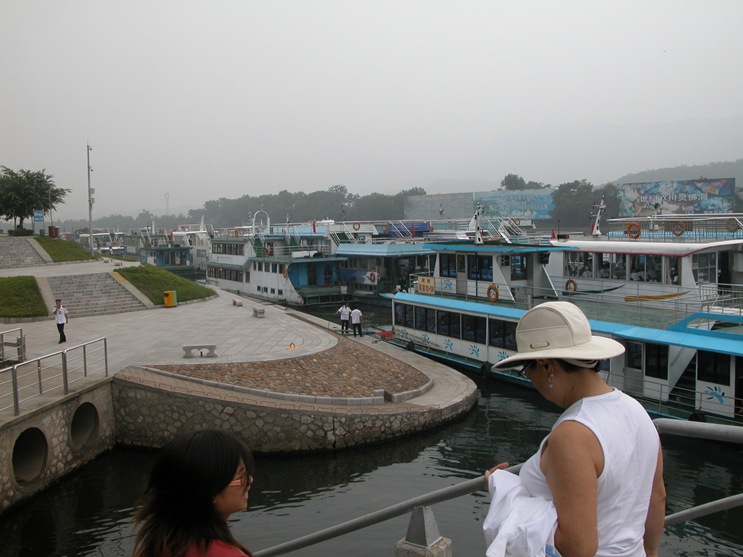 Wendy said that we would be seated in a group with other tourists. It would be an opportunity for us to meet other people. I did not think that we would, especially since most of the tourists we have seen all about did not speak English. So many tour groups everywhere we go and most spoke German, French, Italian, etc. We heard Australian accents and others we could not figure out.

At our group there was a man who called himself a security consultant (read mercenary) working in South Africa (Botswana and Zimbabwe) who came because his friend wanted to come here and did not want to go with his wife, across from him Carlos (who just want to come here) and his mother neither of them spoke any English as they were from Mexico. Across from us, there was a Dutch couple who have been in China for 3 weeks already touring, Jan and Dianne on the cruise boat.

The cruise down the scenic Li River was truly amazing, breath-taking and inspirational. If I was a poet, a painter, musician or artist of any worth, I too would want to express and translate the essence of this scenery into the melody of my heart.

For me, words could not express the beauty and elegance of the hills, mountains, valleys, landscapes and nature’s kiss bestowed on this part of heaven. The harmony of life and the peaceful coexistence of all the forces as we meandered downstream, struck me with wonderment. I could not help pointing to features spotted along the river. It is this region only that has the sharp and singular hills punctuating the riverside. 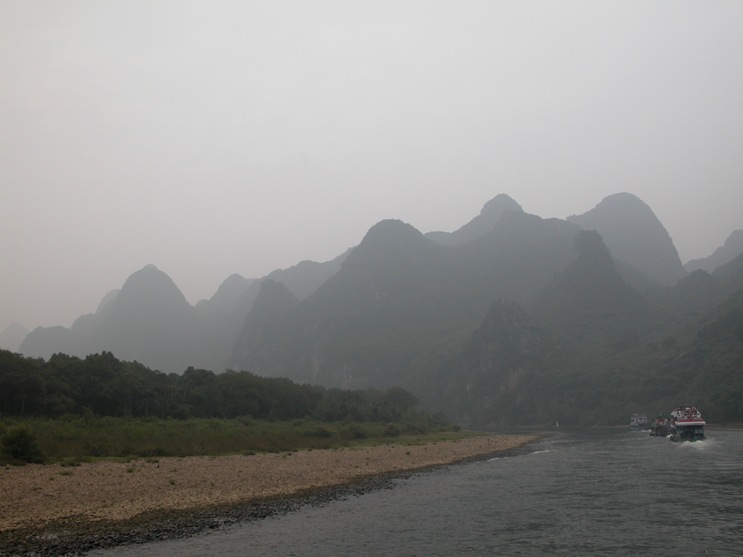 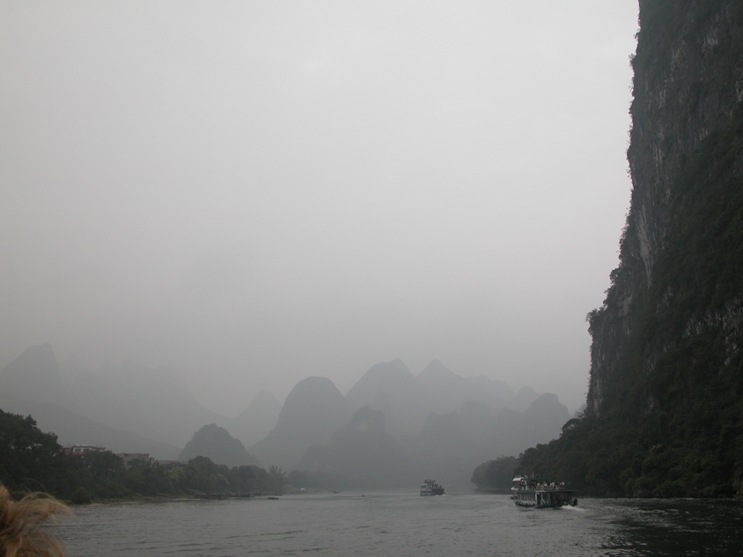 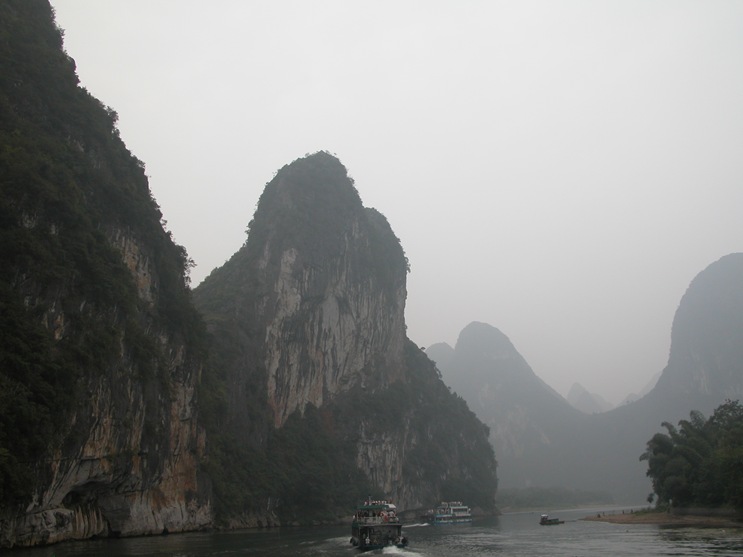 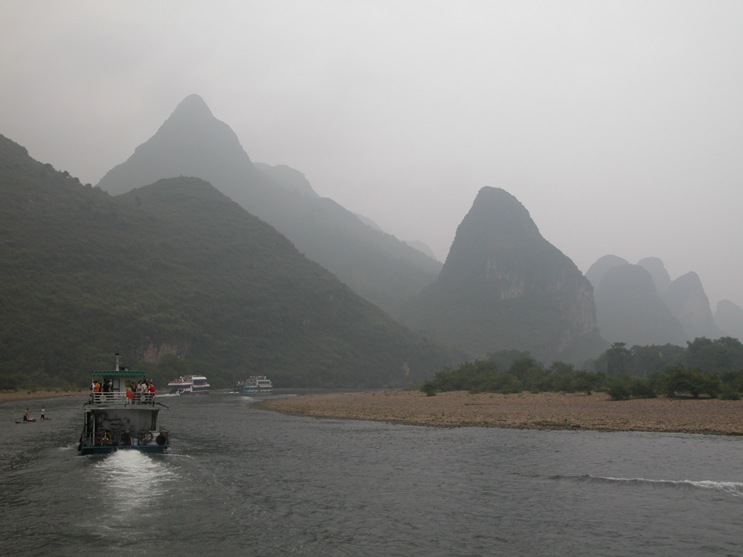 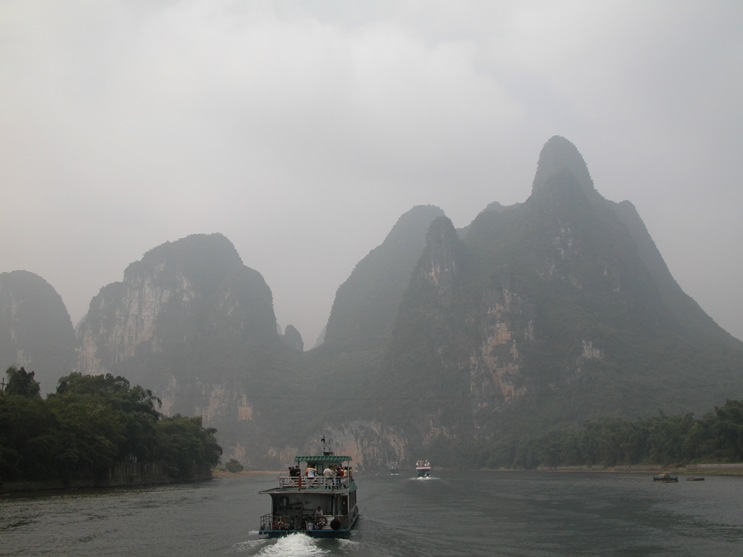 I have been told that the peaks represent hard molten rock that erupted through the softer limestone surface. As the water eroded the softer rock, it left the sharp, steep, vertical peaked formations bare. Gradually vegetation would take root on any horizontal surface that it could take hold leaving the vertical surfaces stained with dirt, sap, residue from the elements and animal deposits. It gave the mountains the appearance of being painted by weeping willow branches. People would then interpret the shapes of the rocks, peaks and vegetation, like old man peak or widow waiting with baby. The scenic cruise was just so magnificent and breath-taking. It was very different from the cruise through Milford Sound in New Zealand and even more spectacular, I think.

It is not hard to understand why so many artists have come to paint these hills and create many art forms through various media after experiencing the splendor that is the Li River. This type of mountain formation is very unique in the world and specific to this region of China. Other ranges throughout the world are more triangular and less rectangular in rise. S and I were on the top deck for most of the ride.

We were called in for lunch and sat with our mates from various countries. The two soldiers loved spicy food and ate the spicy aged bean curd with hot sauce that I would not touch. Carlos and his mother were more conservative, and just as cautious about hygiene as I was. He gave D&J a large blob of hand sanitizer before the meal and when I peeled and cored an apple, they declined a chunk. I was interested in each person’s rationale for coming to visit China, after all, it is radically different from European countries. I can see wanting to marvel at the eight wonder of the world that might be the Forbidden City, wanting to see the terracotta warriors, etc., but even I did not expect this beautiful countryside.

After lunch we were a little worried about what we ate as we could see the kitchen of one of the other boats. 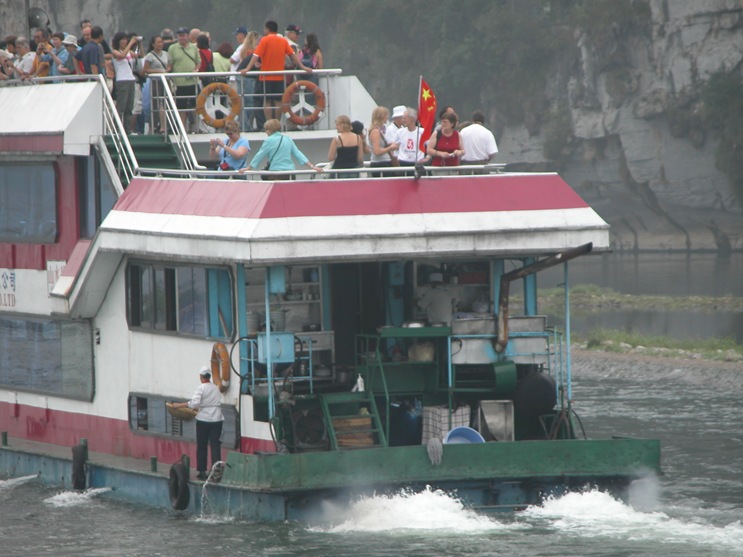 After lunch, I went back to the top deck to view the scenery again. 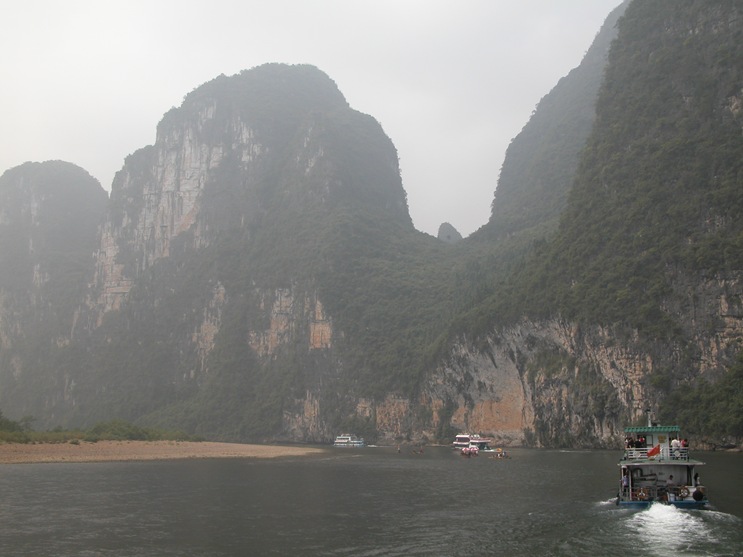 Here was the cheaper way to see a bit of the river. Chairs were just perched on the flat rafts. 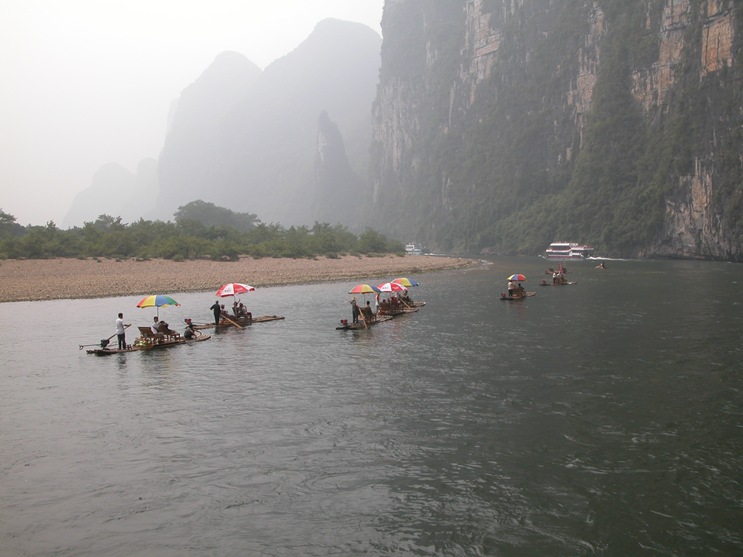 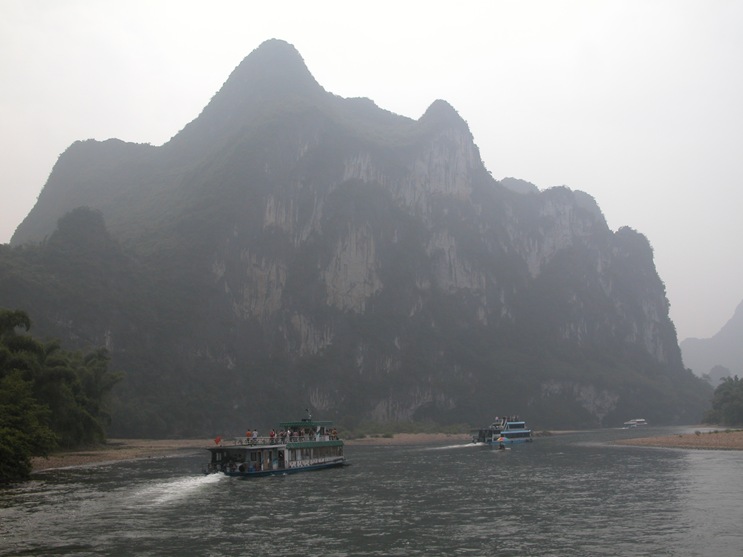 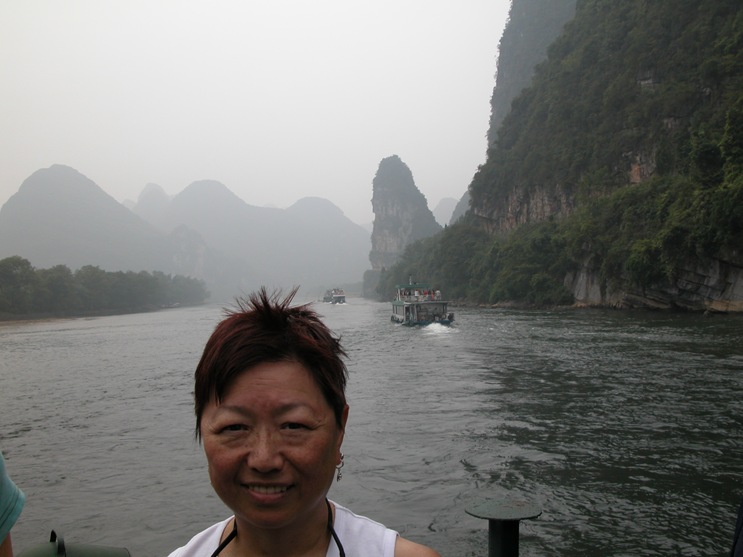 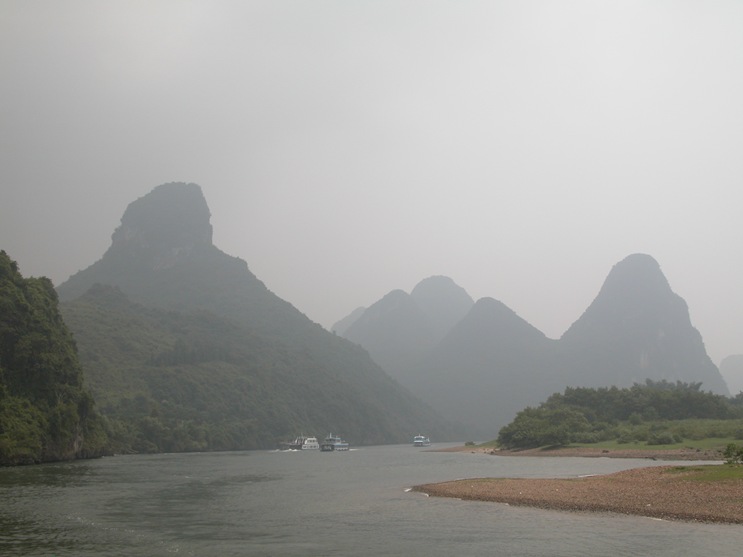 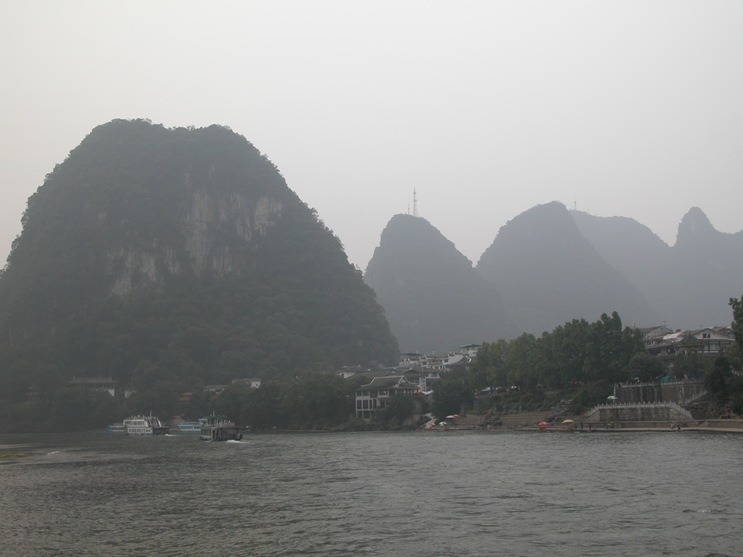 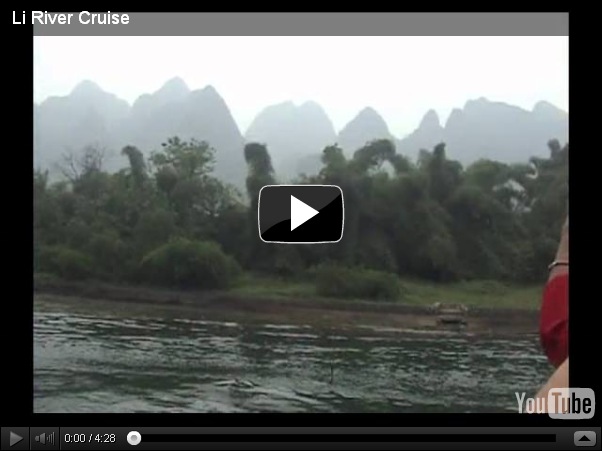 During our meal, the sun started to burn off the haze and it was getting too hot and I was getting burned so I migrated to the side deck where there was shade. D&J were standing there and we conversed some more, exchanging words of praise and awe over the landscape. We got along so well, that we ended up disembarking together. When we ended up at the same hotel our plans started to converge around doing the same activities. Since we enjoyed their company so much we decided to dine together and see the same show together. We did not have any plans for the evening and it was nice to have suggestions for entertaining ourselves. Having company was a bonus. Wendy would not have sat with us and she is a very entertaining person but as is the custom for guides, they leave when we eat and do special things.

Jan and Dianne were going to take a bike ride around. I am not comfortable ride single in Toronto on designated bike paths so there is no way that I am going to risk my life here with the crazy drivers and such pedaling about. For one thing, it was so hot, just walking about was making us hot and sweaty. Secondly, we did not have maps or any idea what we want to cycle around to see. I knew we were tired and needed some time to catch up the journal. Most of all, I wanted to shop, see what was around.

We did walk about a great deal which was painful because our legs were tired from standing on the cruise boat for 3 of the 4 hours, cruising the Li River. Truthfully, if we did not have dinner companions tonight, we probably would have simply crashed in our rooms until dinner but we needed to say we did something. There were the booths of goods up and down most of the streets downtown. We walked through a park where many locals were playing cards and mah jongg. I noticed a beautiful structure with pagoda top linking two corridors of rooms terraced down to a central courtyard leading to numerous other chambers. I do not know the age or the building or why only the ground level is occupied. 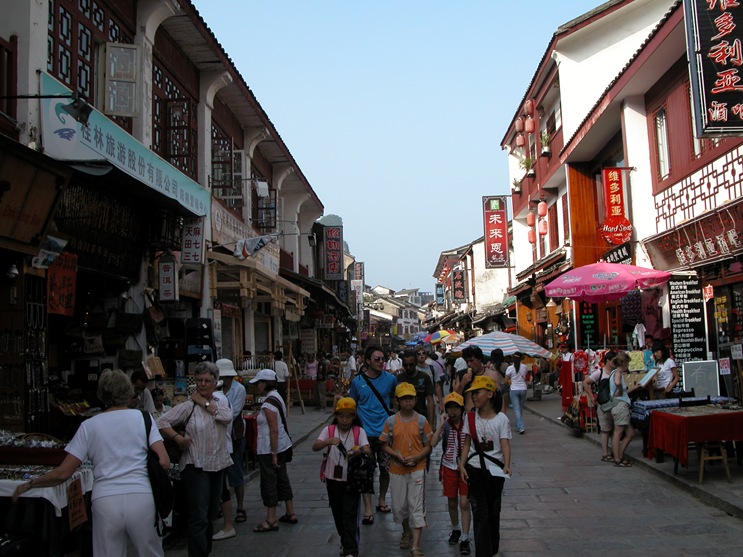 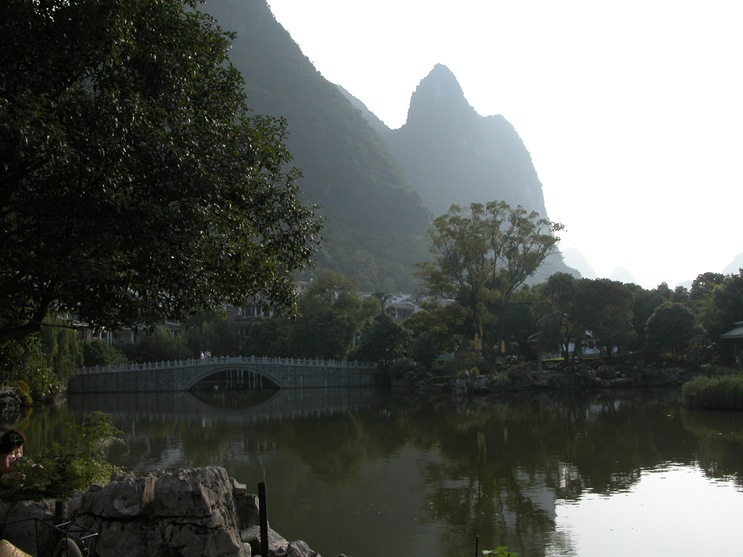 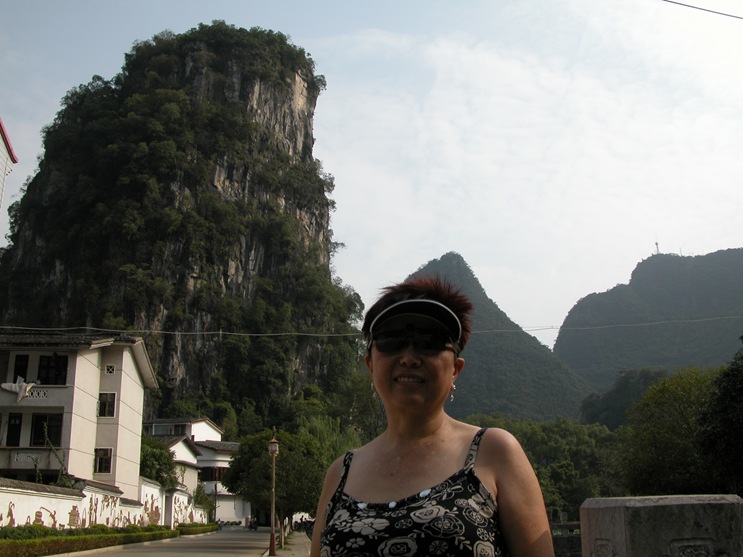 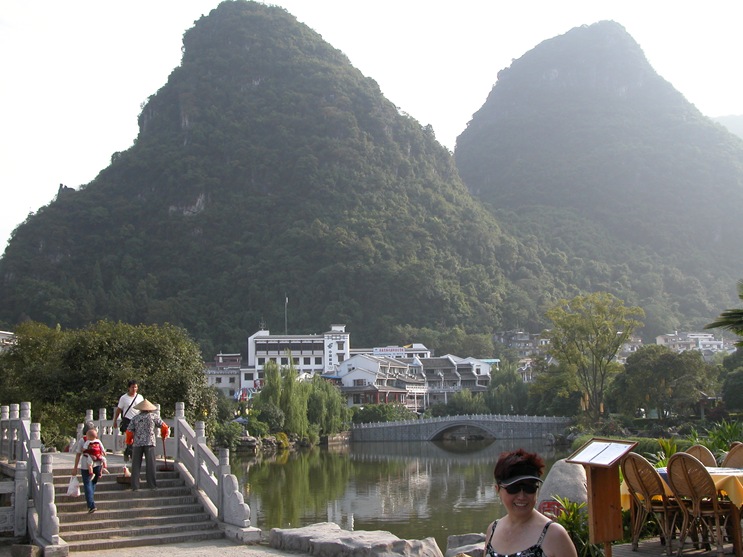 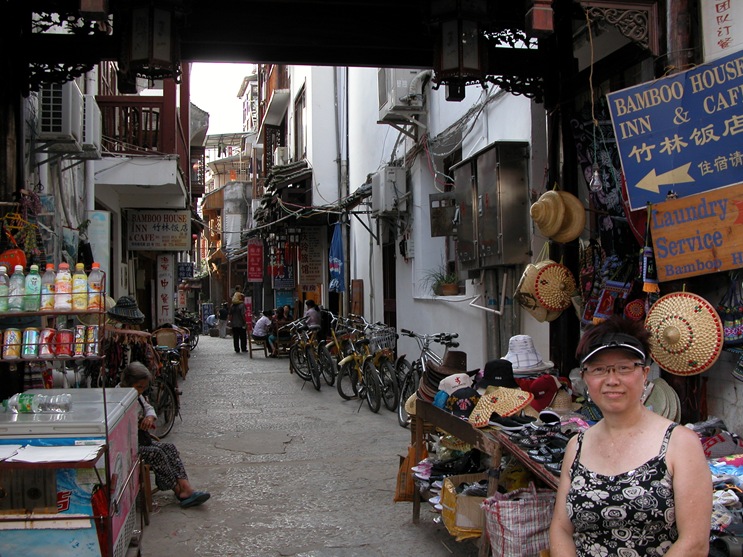 The view from our hotel room window. I am not sure how they got up to the building on top of that spire. 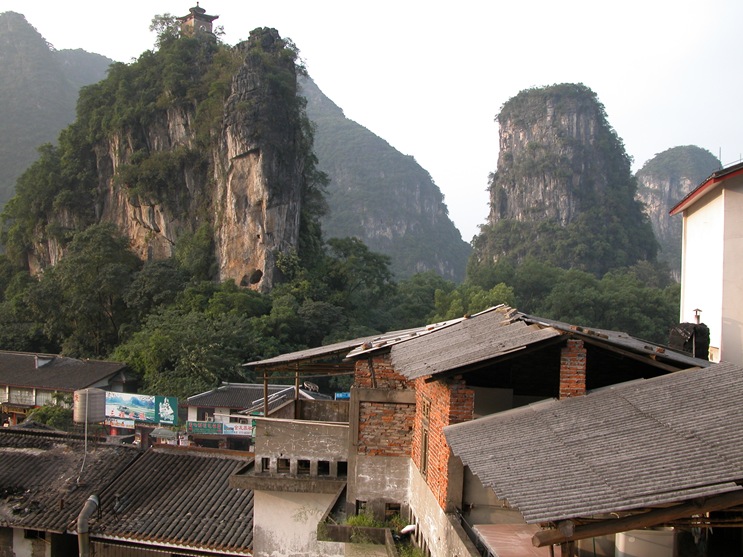 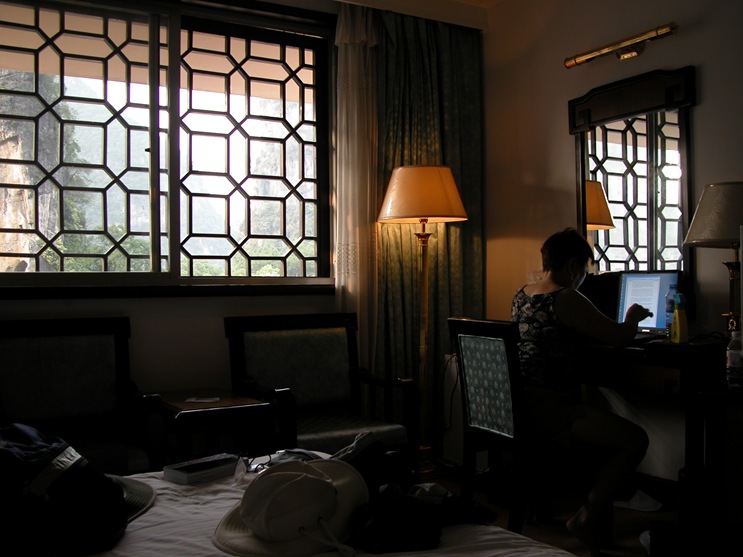 We met at 6:00 pm in the lobby of our hotel. Wendy and the other guide select Mei You Restaurant for dinner and since D&J’s meal was already ordered, Wendy helped us add a few dishes for a collective meal.

We have lots of time before the River Show that night, so after a leisurely dinner, we strolled around the street stalls that Stuart and I had already visited.

We got tickets for the second show because the early one was sold out. The outdoor theatre seats 2,000 people and our performance was not as full as the first. There were 600 performers, from singers/dancers, boatmen who paddled back and forth and did the red wave. It was dizzying trying to keep your eye on where the segments of action would happen. This show was directed by a famous movie director, Zhi Lui. Some parts of it were imaginative, and surprisingly good, according to the crowd that gasps in awe. It certainly struck me as a massive feat of production coordinating that many bodies. The troupe consisted of 100 professionals and 500 hundred local people (farmers and natives) who have day jobs and in the evening would perform every night. 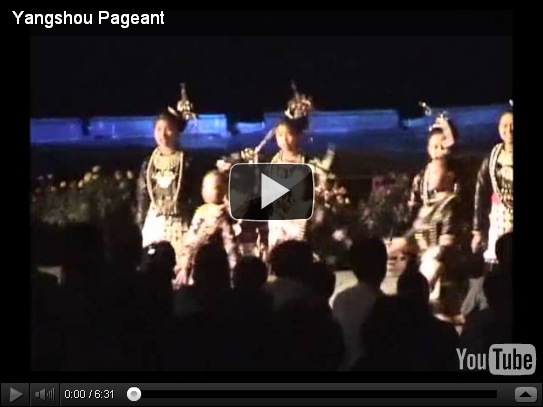 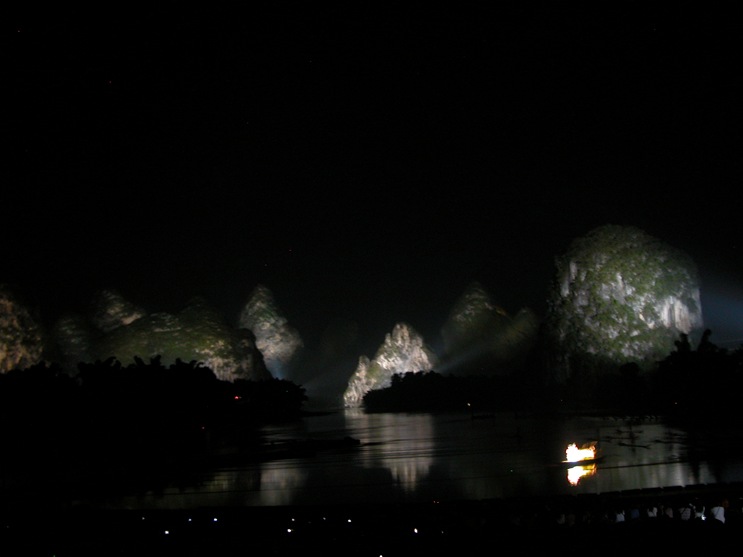 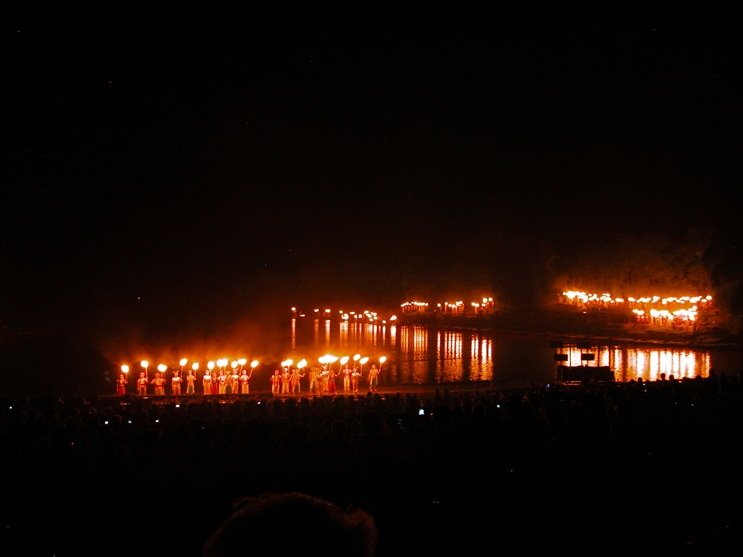 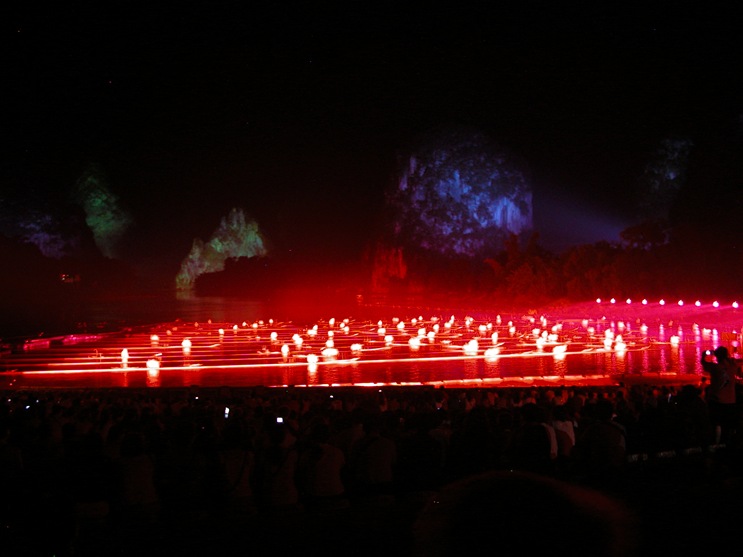 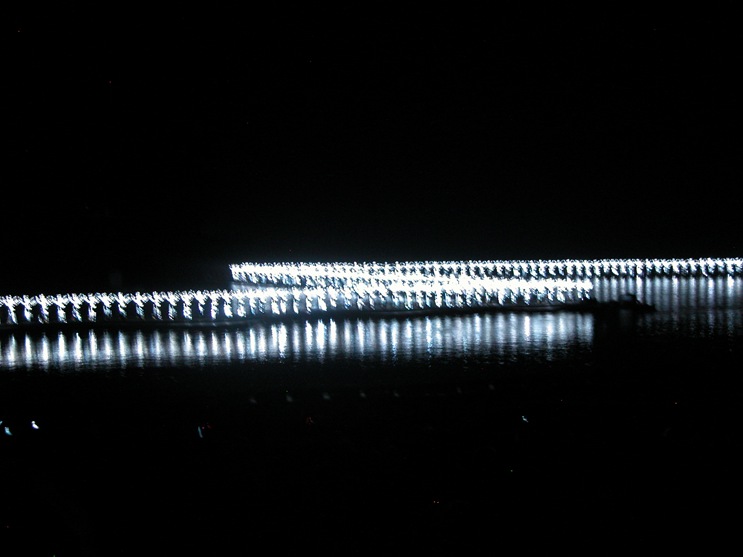 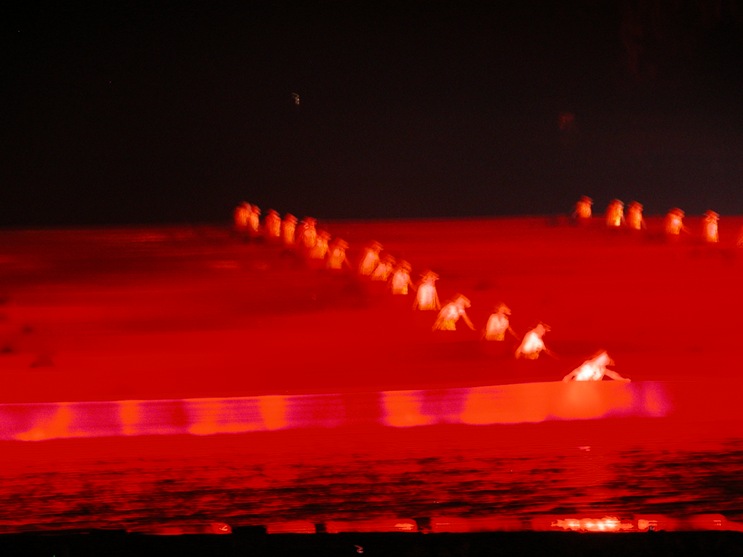 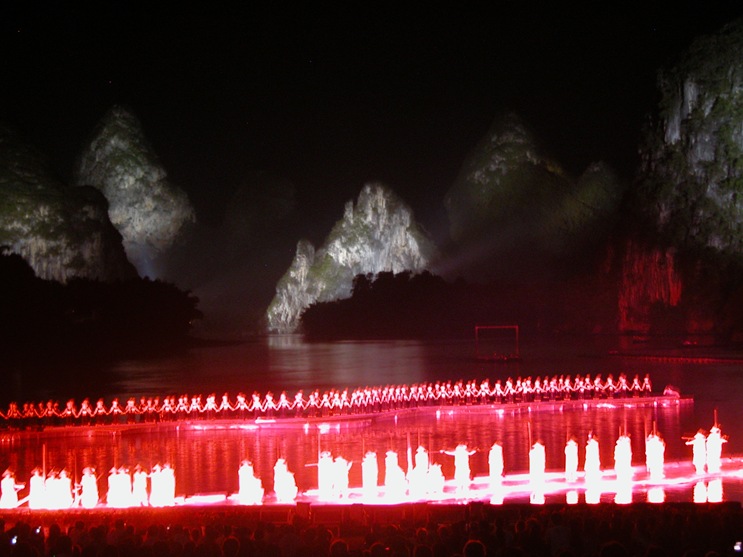