Around 8:30 am, we head down to the front desk to checkout and wait for our guide. The first stop on the revised schedule is a cable car ride from the south island to the middle island that is separated by two rivers, the Yangtze (brown coloured water) and the Lijang (green coloured water). Jenny says that the cable car used to be the only transportation between the islands that join the entire municipality. Now there are bridges, subways and the light rail. This is the fourth and youngest municipality that is quite large with many suburbs stretch along the rivers. 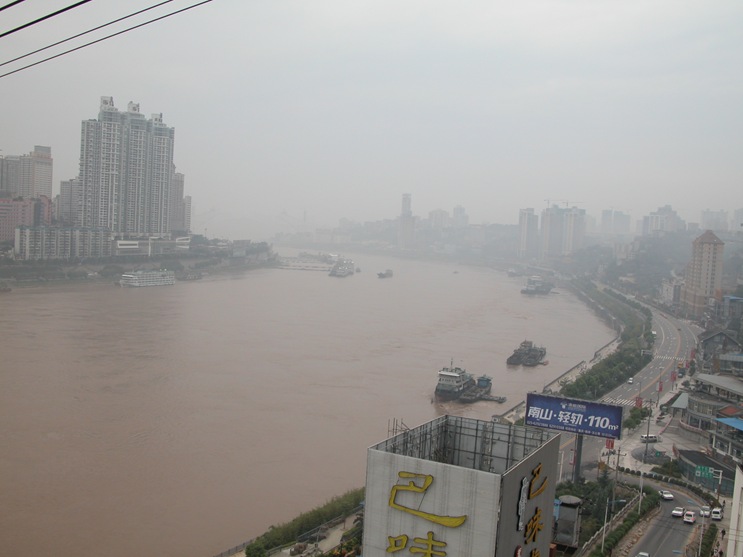 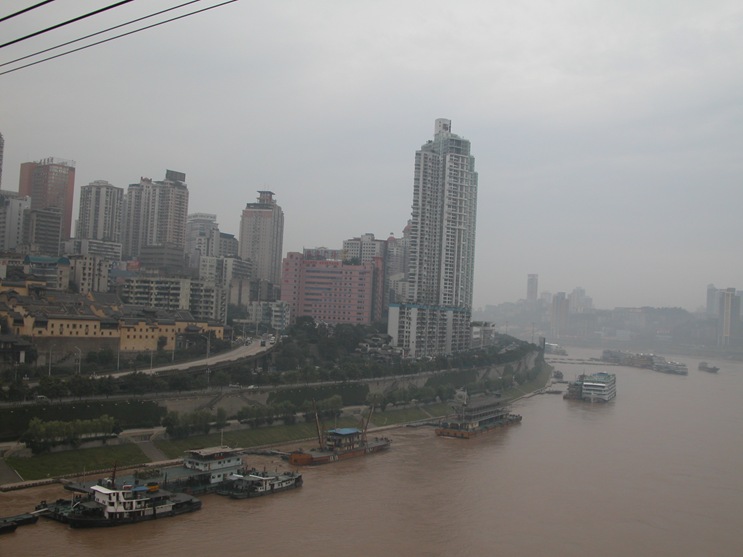 Riding over the river one can see the dirty parts of the town with all the old houses that have not been ripped down and rebuilt. Overall the impression is modern and very high density dwellings in apartment building rising over 30 floors above malls and rows of stall size stores. All over the city you can see the attempts to fuse new and old architecture. One office tower has a rectangular base, looking quite modern, until the eye catches sight of the top which was finished in the traditional Asian way with the porcelain tiled roof curving up to the sky. It is a short ride up and down the cable car that crosses the yellow river. 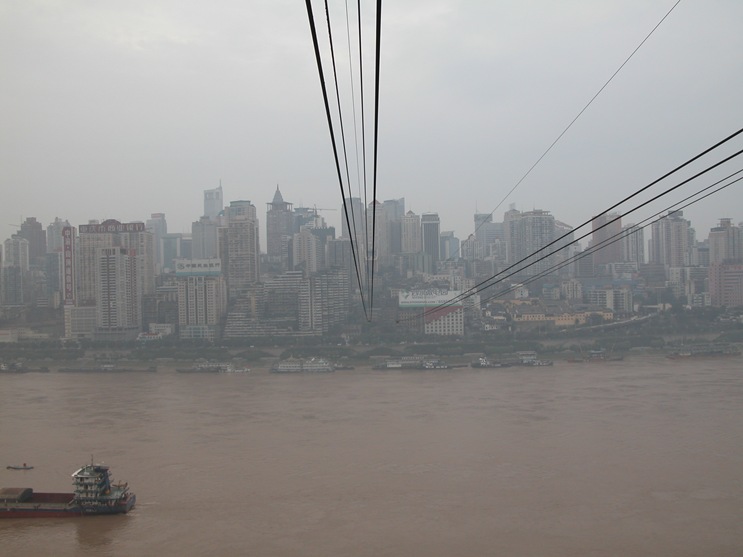 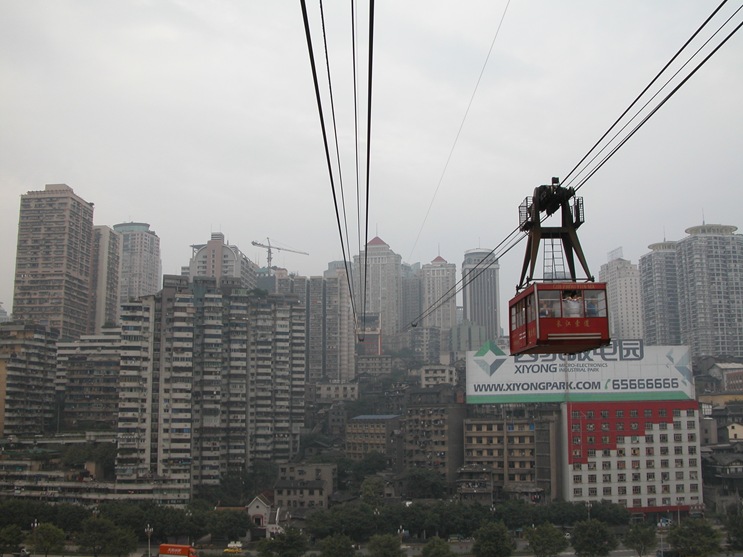 This didn’t look like a fun place to live. 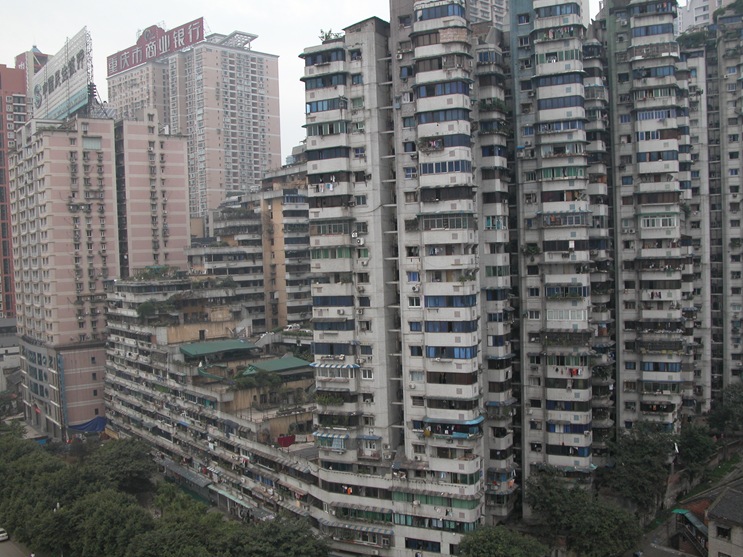 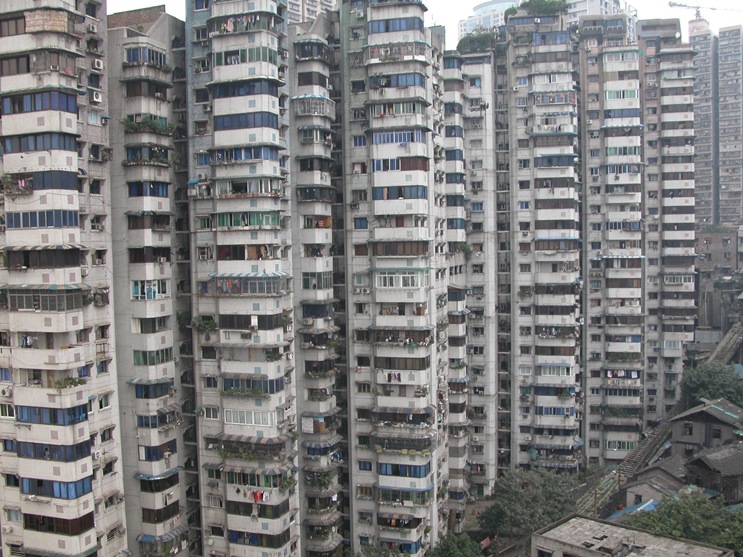 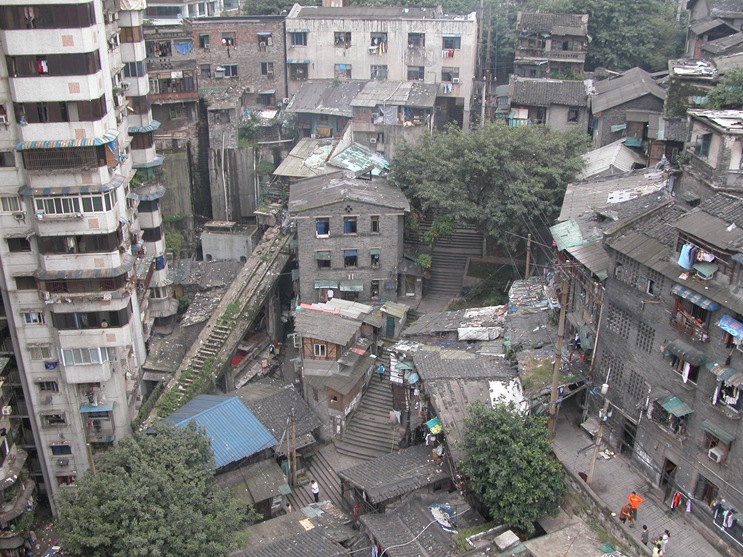 Next on the agenda was a visit to an older 3 Gorges Museum which is up on a hill with an observation tower for another view of the city. These babies got to climb the hill the easy way. 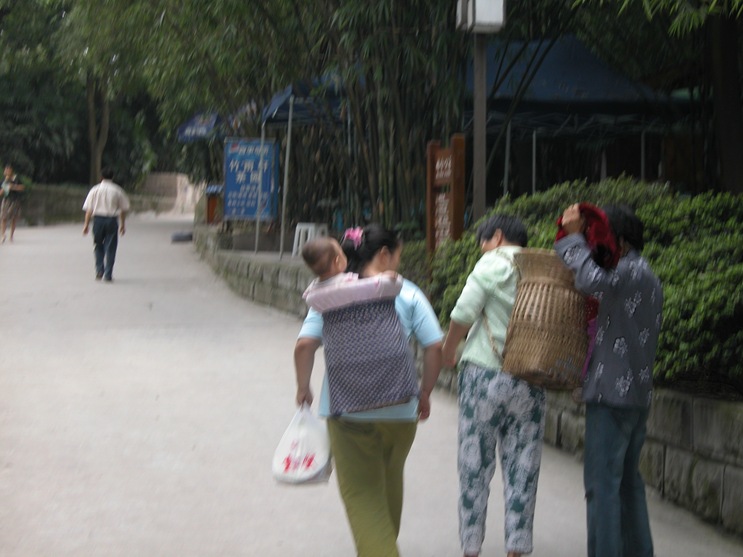 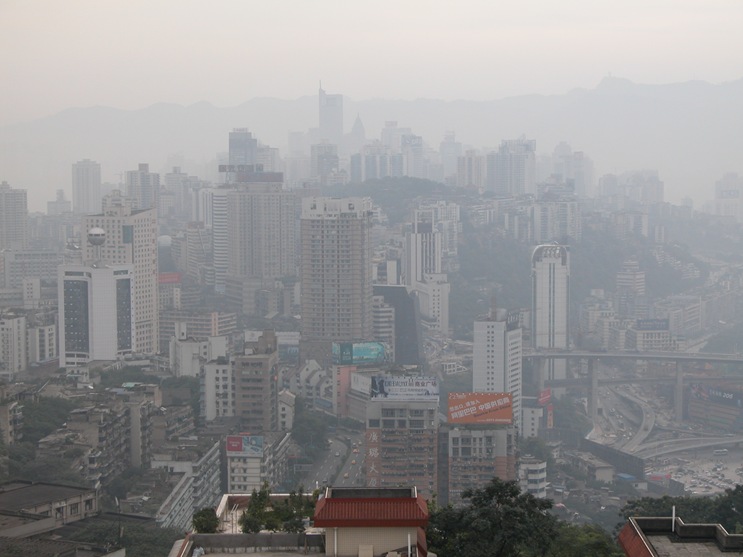 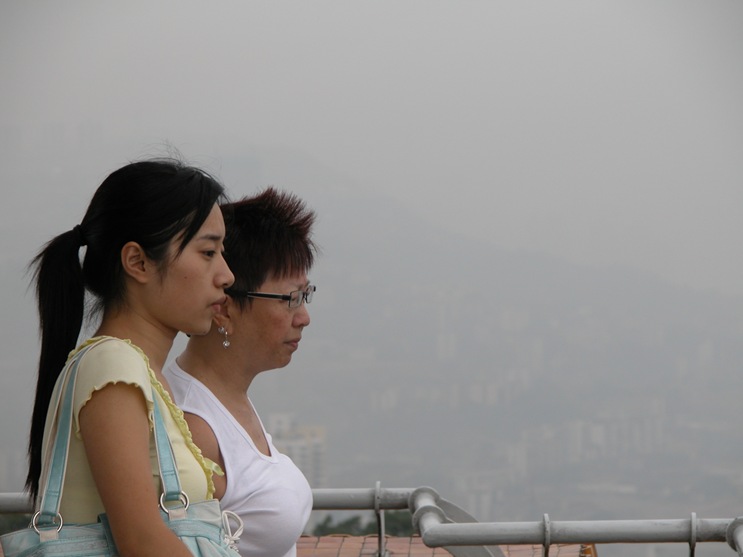 Someone has a nice setup.This was the view down to the top of one high rise. 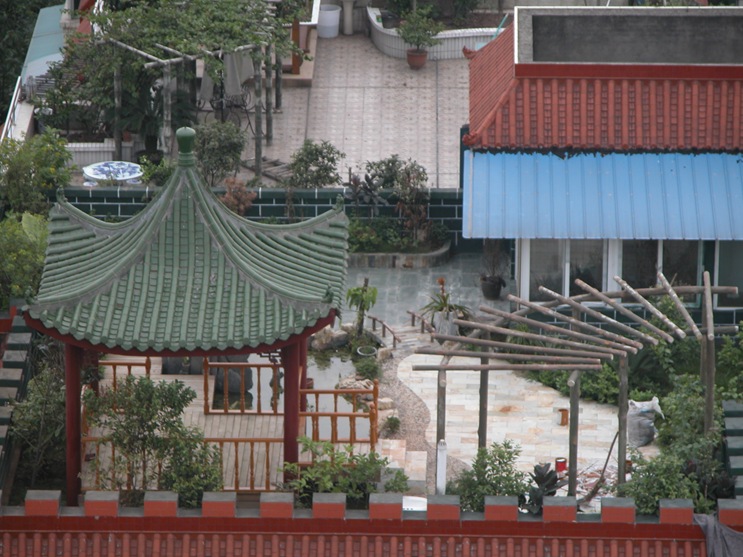 In the museum the resident artist had painted a 30 metre long picture of the Yangtze River countryside before the dam project and on it are markings where the water level will be after completion. Unfortunately no picture were allowed  It highlights all the communities and landmarks that will be submerged once the dam starts to control the flow of the river. Many villages are destroyed and the residents are either relocated in different areas or new homes are built higher up for them. There is a large black rock island where poems and pictures have been carved into the surface. The government is going to build a bubble over it and make it into an underwater museum. Other temples and historical structures, like pagodas and gates will be moved to higher ground. In most places, the water level will be raised 50-85 metres above the current depth. The brochure is only 80 Yuan and I want to buy a copy of it. There is a little gift shop everywhere one goes.

We next went to a picturesque garden on the hill. 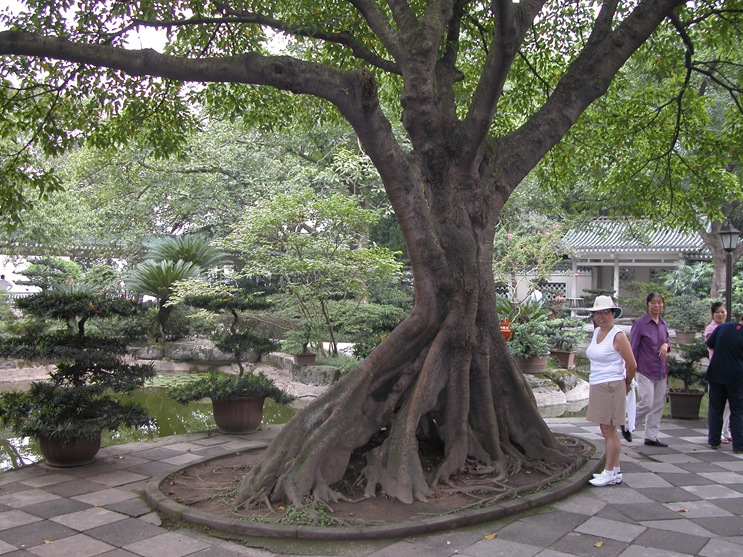 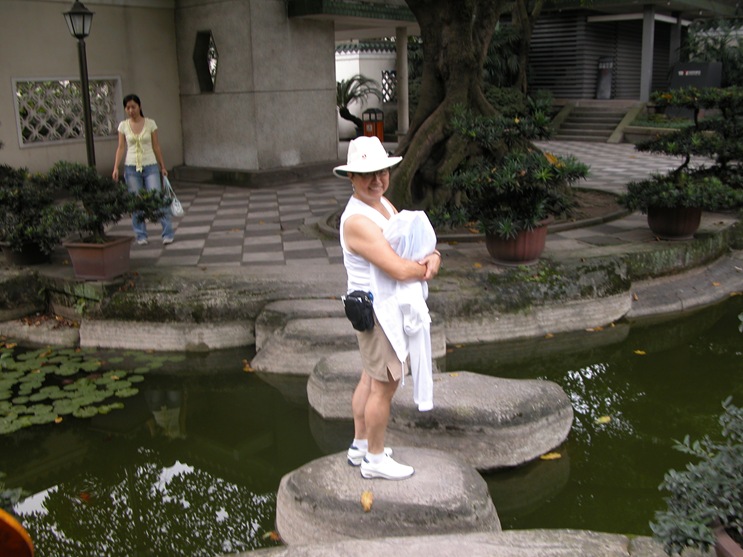 For lunch we went to this very ornate mall and then wandered around it for a while. 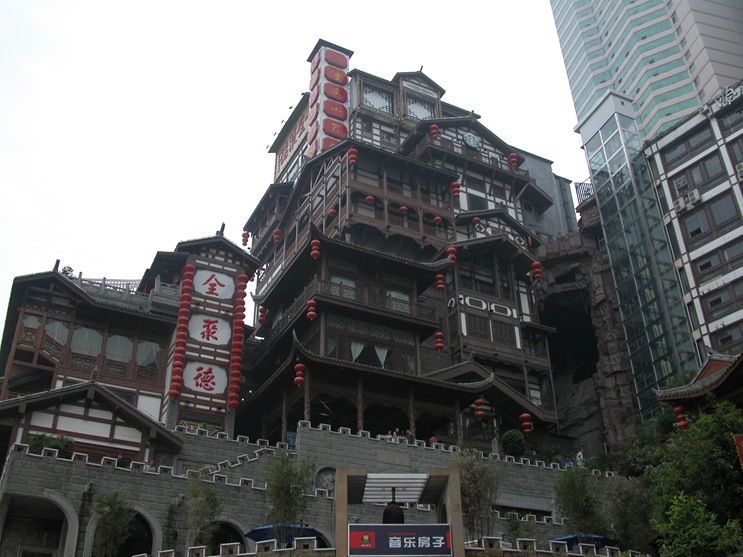 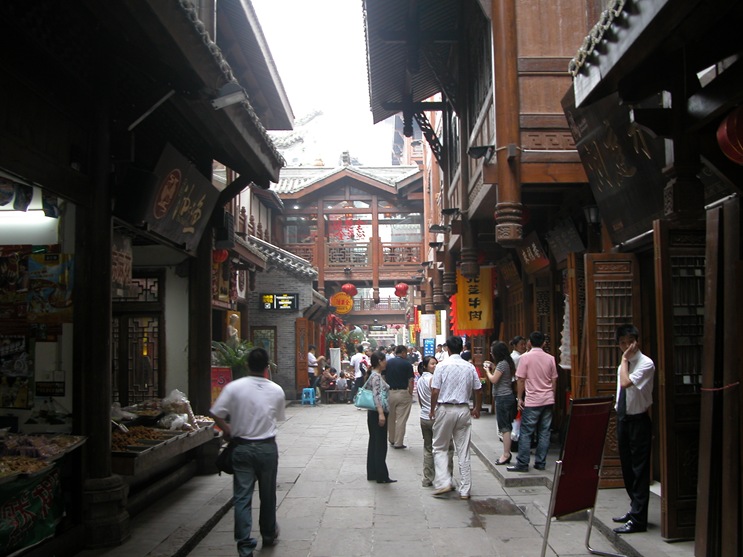 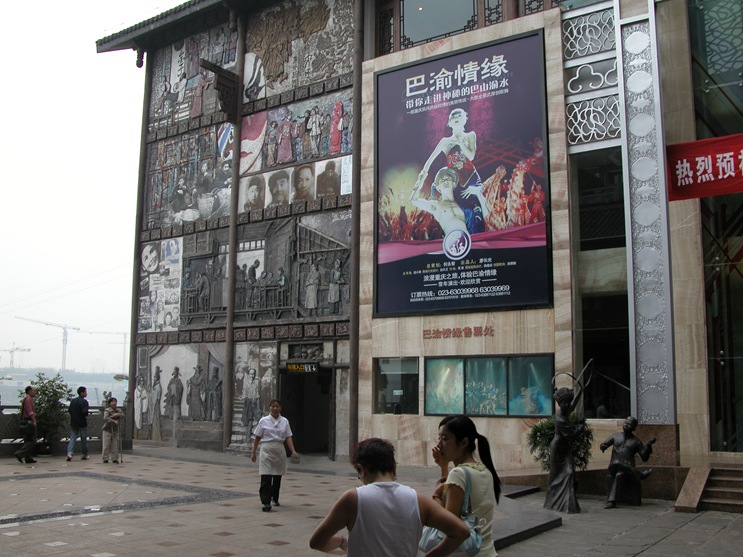 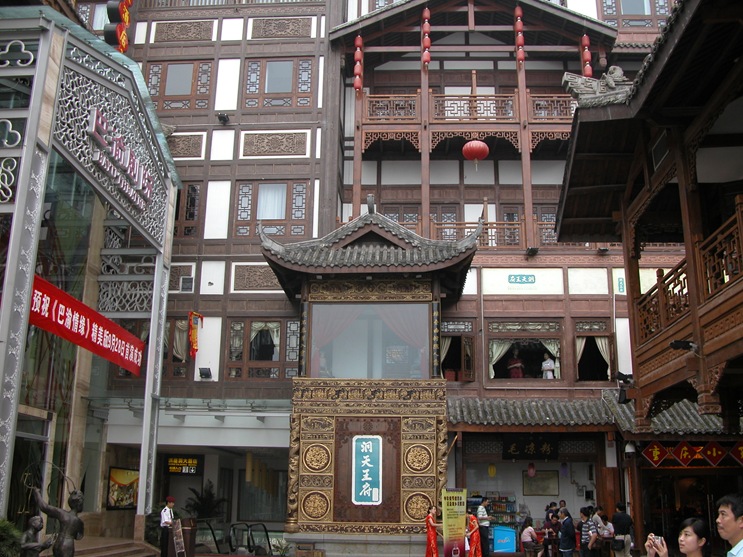 In the afternoon we went to tour the modern Three Gorges Museum. 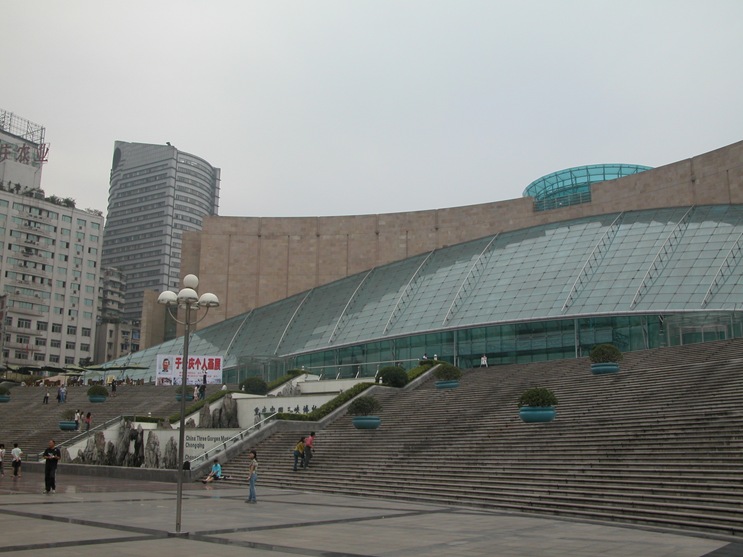 There wasn’t much inside worth taking pictures of. Just a lot of “information” about the Three Gorges Dam project. The building across the plaza from the museum was impressive. I can’t remember what it was. 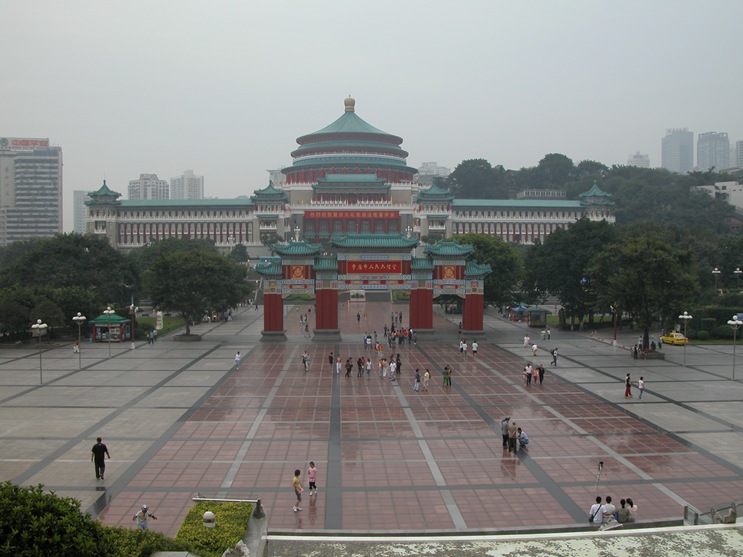 Then it was time to board the boat for our cruise down the Yangtze River through what is left of the Three Gorges. This is not our boat. 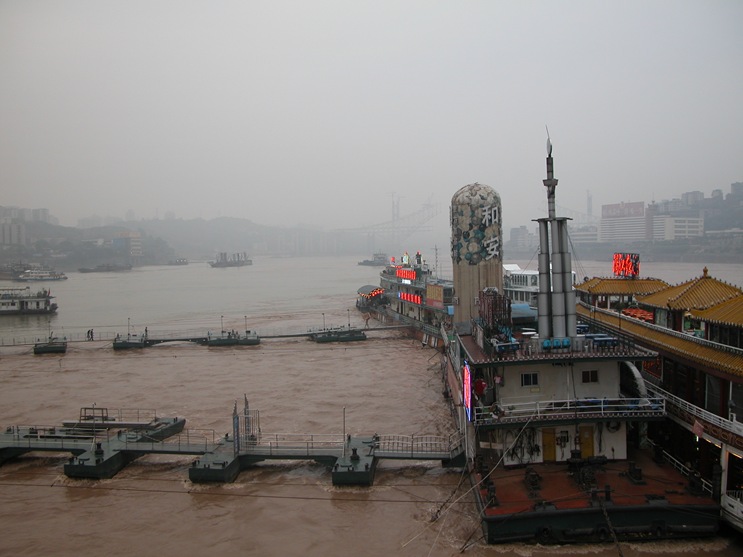 We had some very nice tablemates for our meals. The couple on the right were also on a tour from the same company, following a slightly different route. 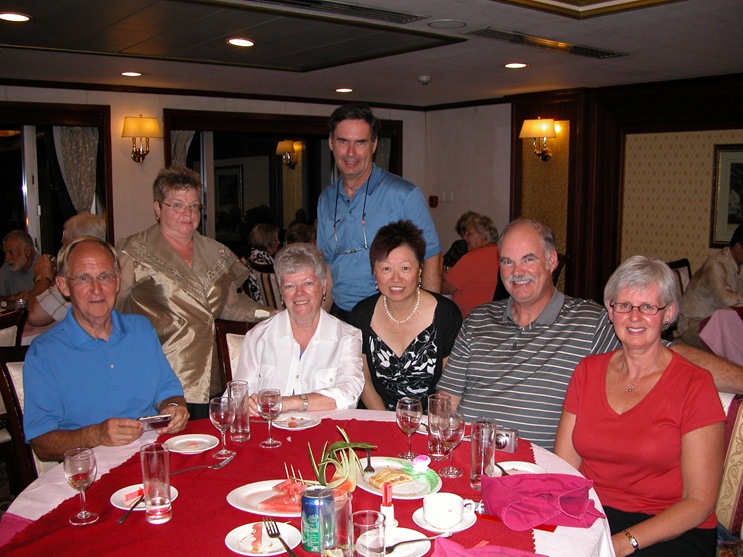 That evening the city and the boats on the river were lit up like crazy. 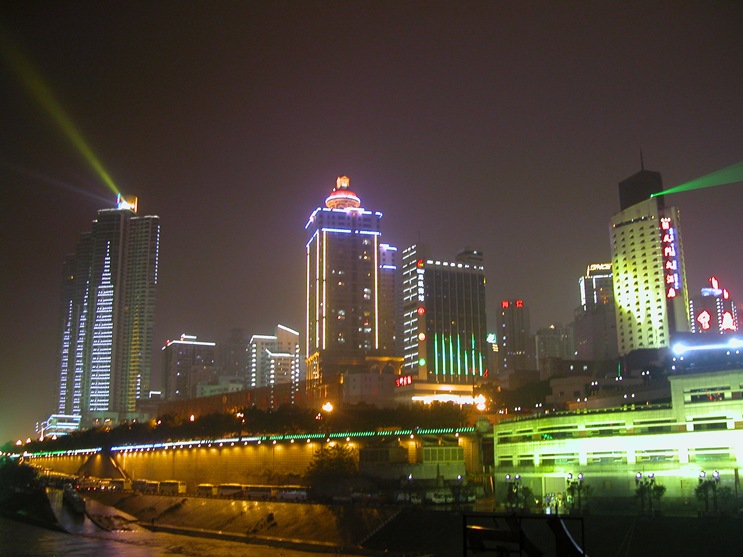 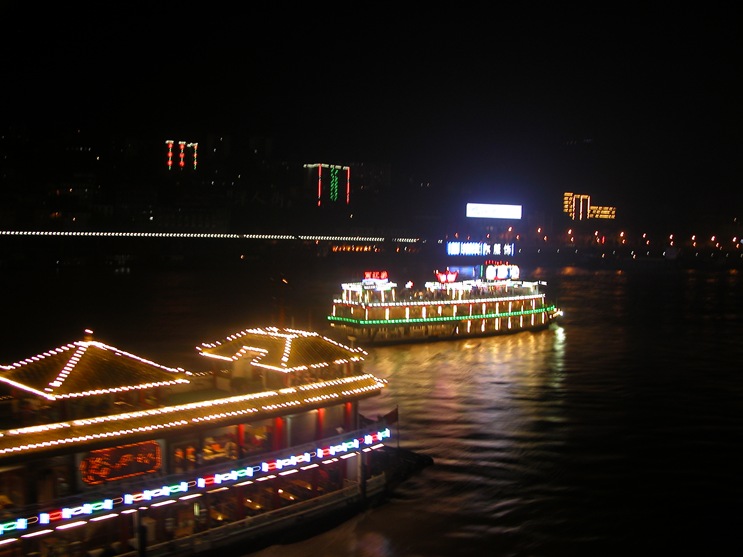 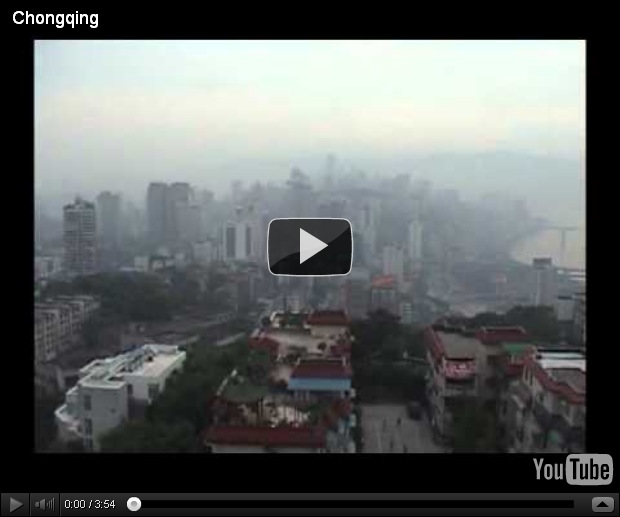