The man responsible for the lit waterfall built 3 dams on the river to supply power to Seattle. The company is called Seattle City Light and is now owned by the city. Today we went to get as close to each of the dams and their powerhouses as we could.

The first power house is the smallest and is right next to the waterfall. It is also the only one you can see inside thanks to Sep 11. This one only generates 450 Megawatts and I guess they figure it is too small for anyone to bother with. So sad. 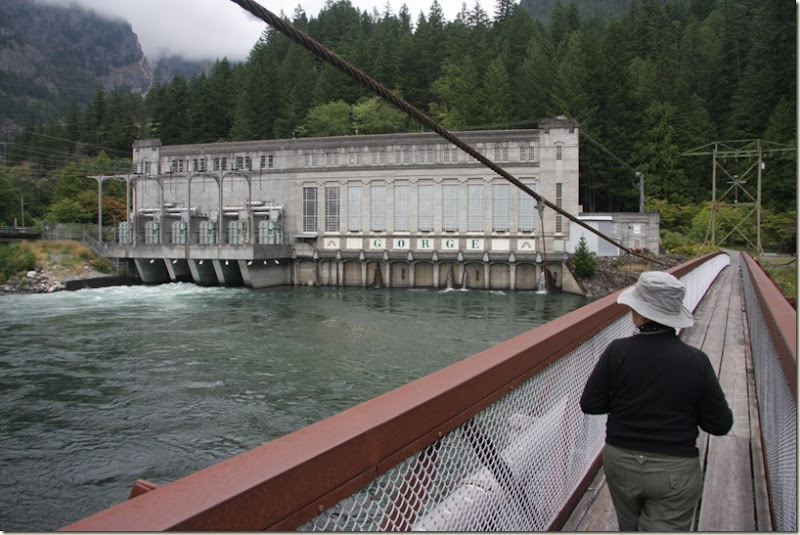 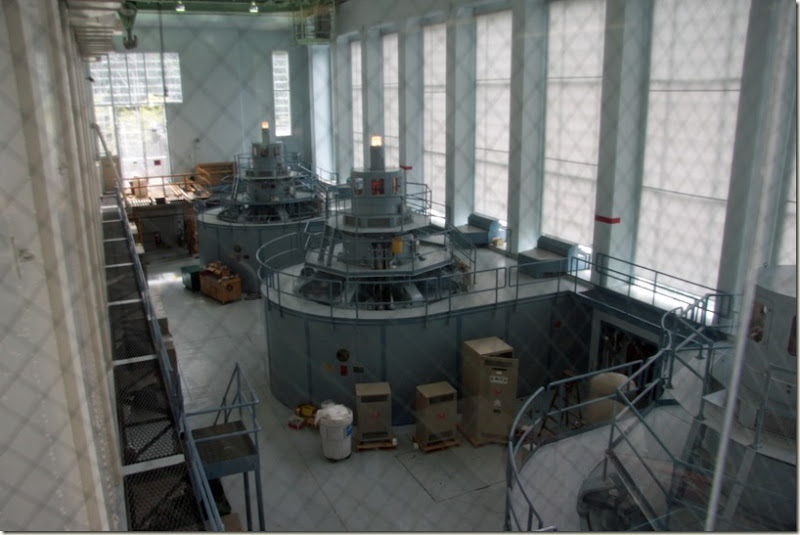 The associated dam is 2 miles away. We walked a short trail that said it gave a view but this is the best we got. 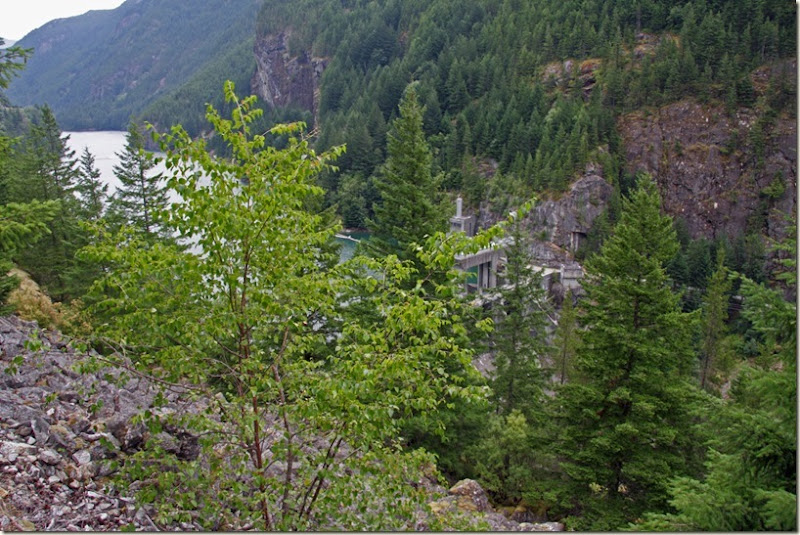 Our next stop shows the value of exploring all the nooks and crannies. The map showed a road off the highway to the town of Diablo and also showed some trailheads. The sign on the highway just said “Diablo” and an arrow. We found this mostly abandoned town and the powerhouse to the next dam called Diablo Dam. There was not another soul around so we got out and walked around a bit.
The powerhouse was built into the cliff. 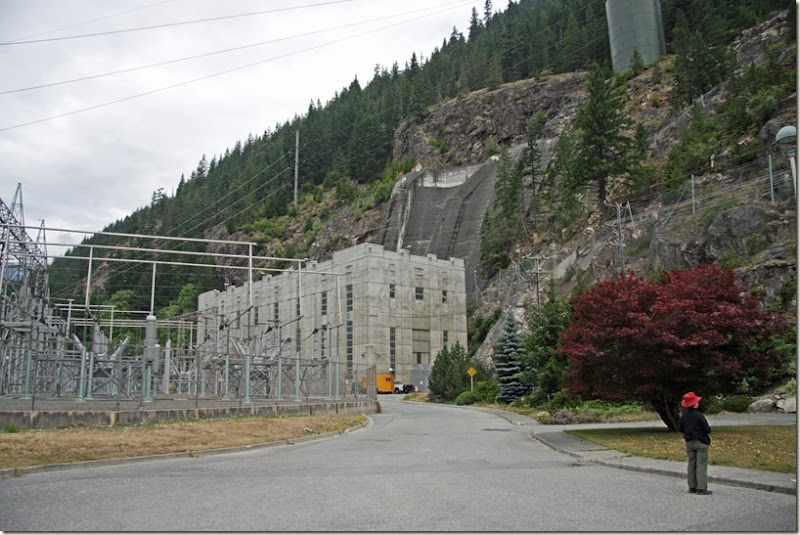 I remembered reading about an inclined railway that I think was built to help the construction of the powerhouse but was turned into a tourist attraction. It closed in 2000 and we found it here. It was a little sad to see the abandoned  ticket booth and waiting room. 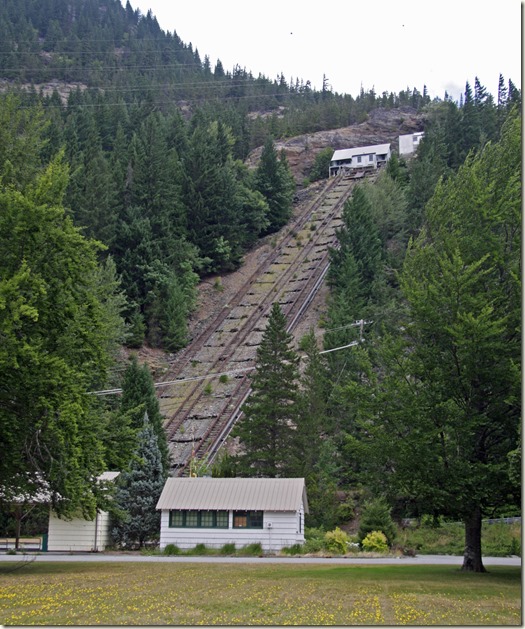 This platform held about 100 people and was pulled up the hill for a view of the river valley. 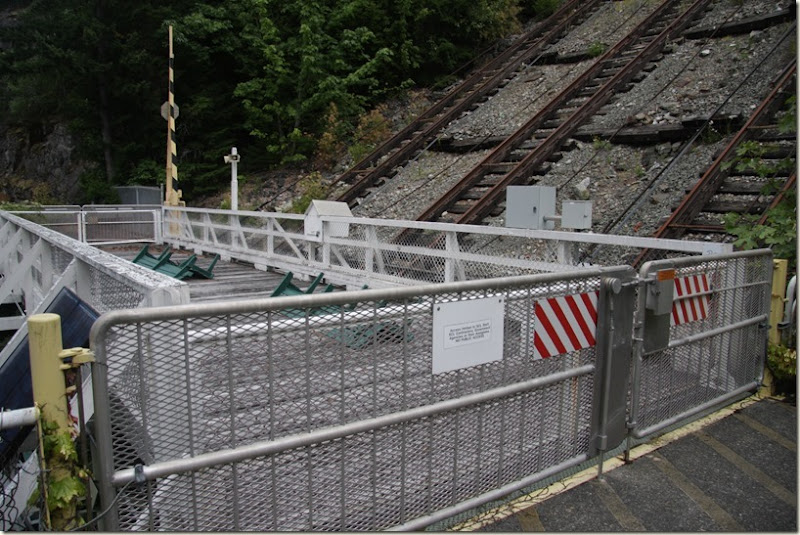 Since the powerhouse was here we walked down to the river to see if we could see the dam. Sure enough. 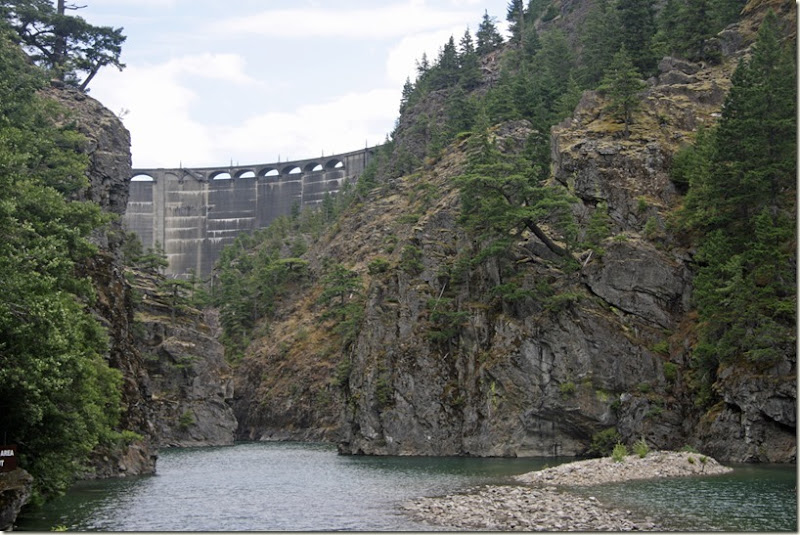 We also saw cars driving across it. A look at the map showed a side road off the highway was what we wanted. 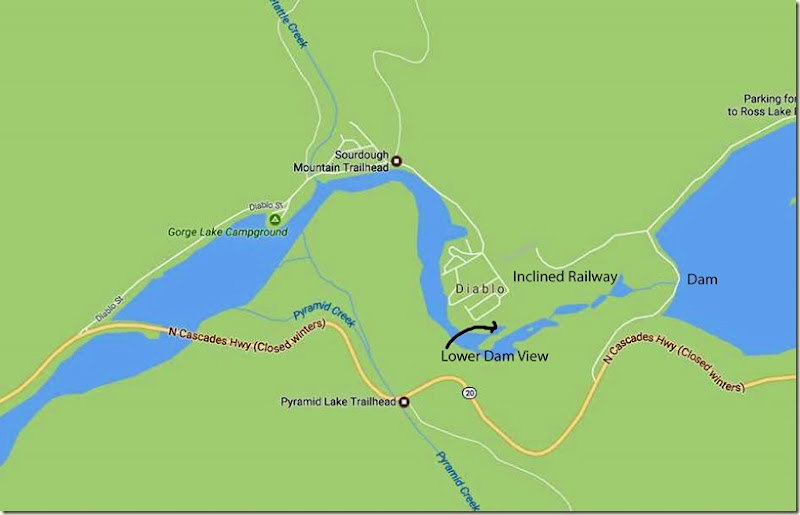 Back to the highway we found the road but the sign gave no indication that it crossed the dam and just said it was the road to a resort. Without going to the town we would have missed it completely. Only a few other people were there.

The road across was barely two cars wide with beautiful light standards along each edge. As you can see the wall was only about waist high. 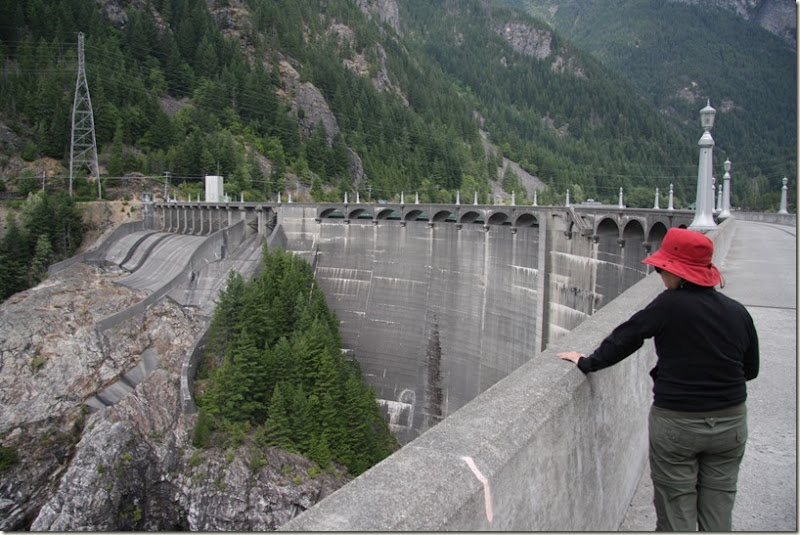 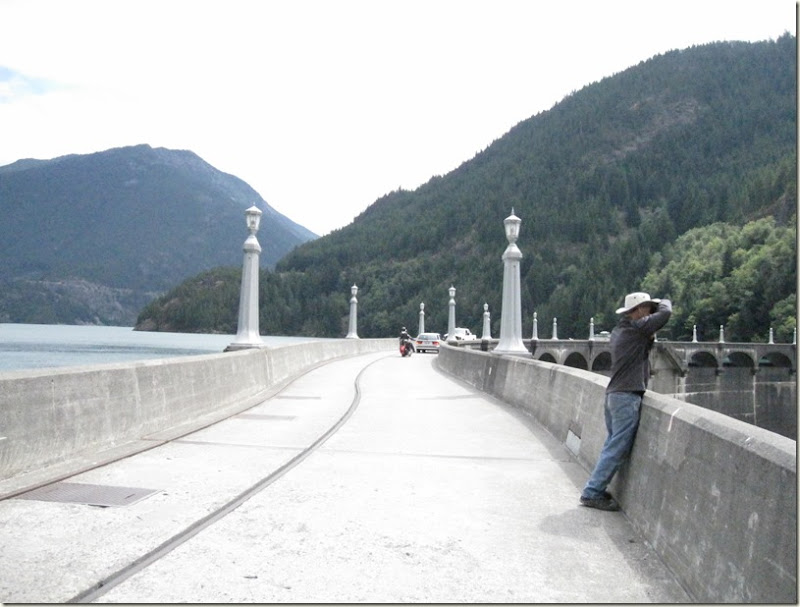 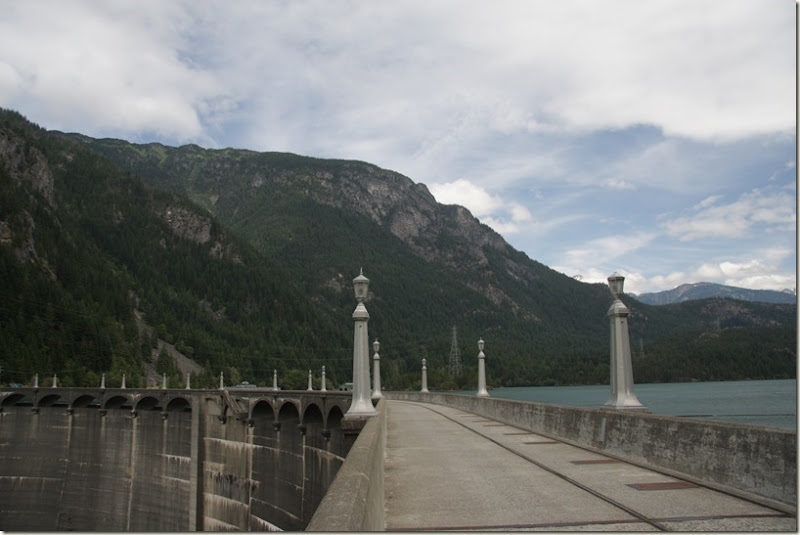 Looking back down to where we had been in Diablo. 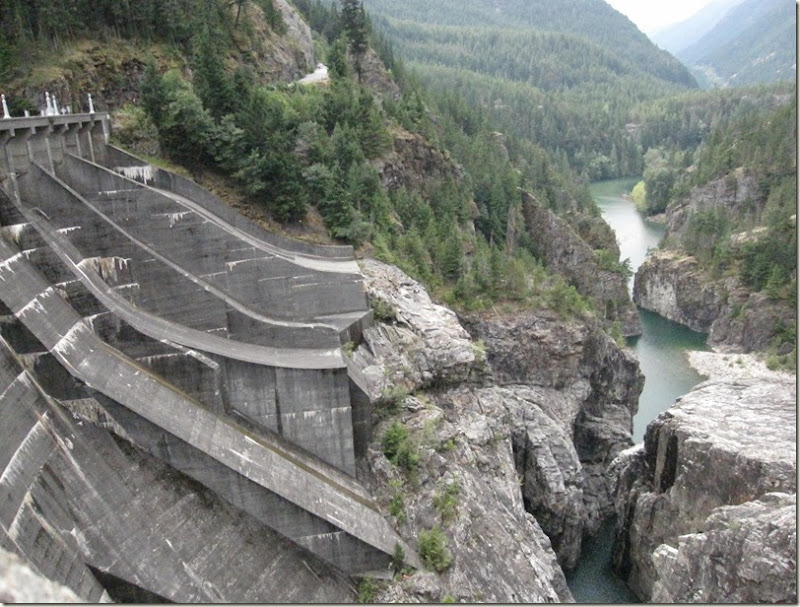 It was very freaky leaning over and staring down the dam face, 390 feet straight down. If Jennie ever wanted to get rid of me… 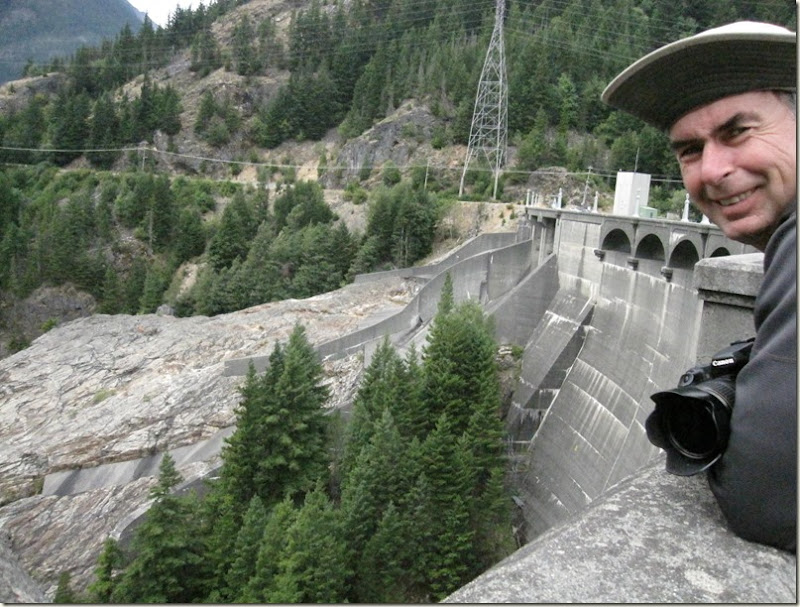 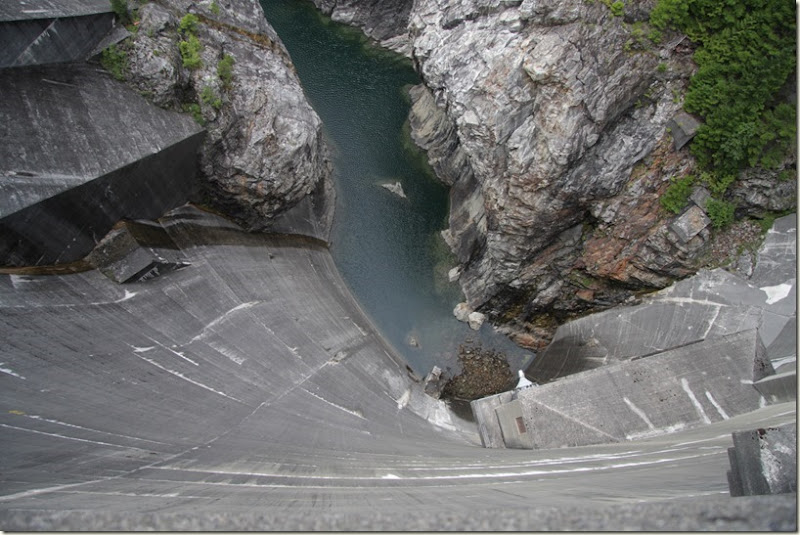 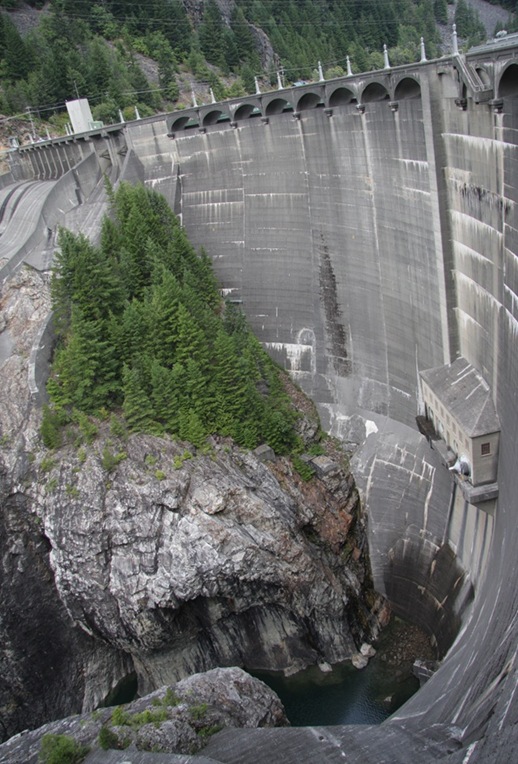 We loved the graceful curved spillways. Too bad there was no water flowing. 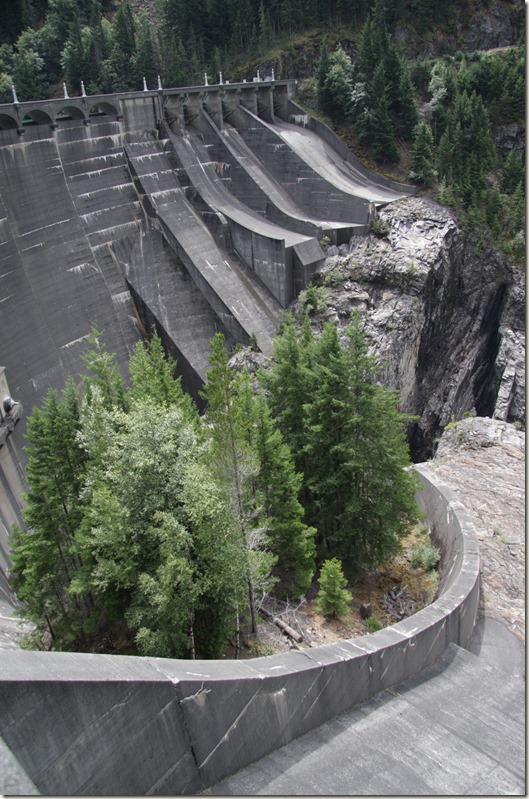 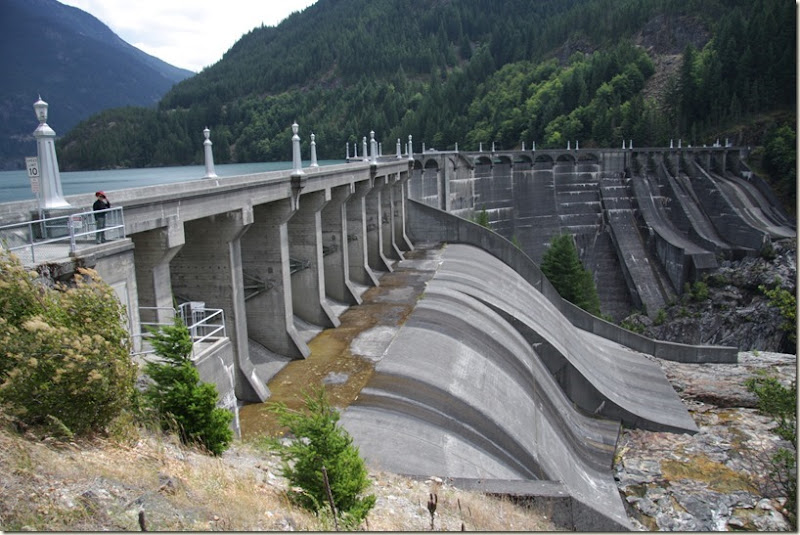 There was a very strong wind blowing up the gorge so we squirted some water out and watched it blow upward (into Jennie’s face). 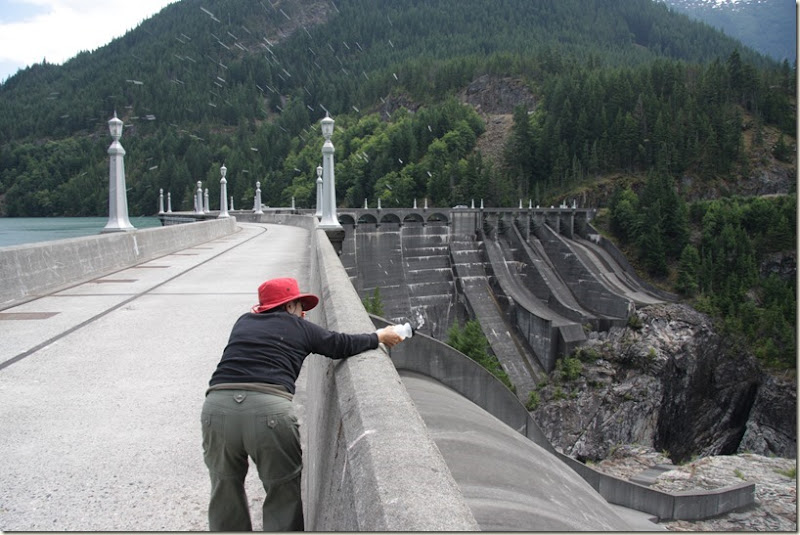 Back out on the main highway we drove along side the reservoir behind the dam. This is the view of the dam and reservoir that 99% of the people get from the lookout on the highway. Nice but not the same. They don’t know what they missed. 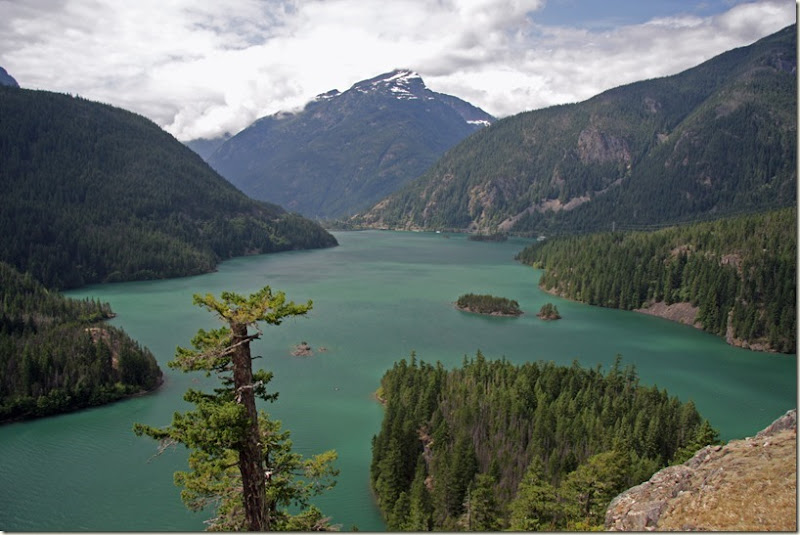 Finally we did a short but steep hike down to the 540 foot high third dam called the Ross Dam after the man himself. 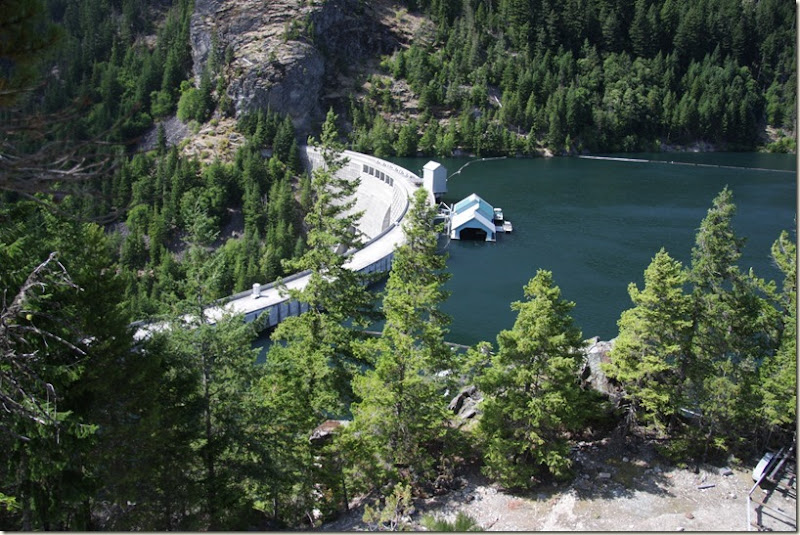 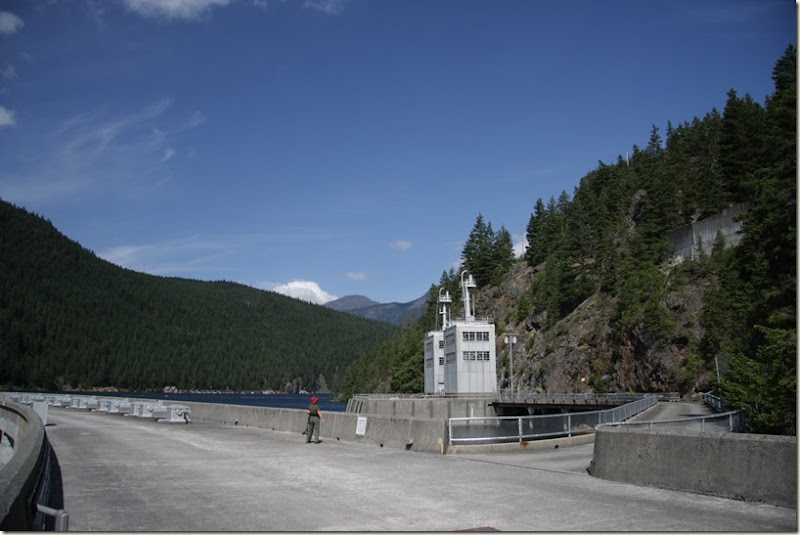 It was a much more modern looking dam with this checkerboard pattern on it. The Diablo Dam had much more character. We didn’t stay long here. 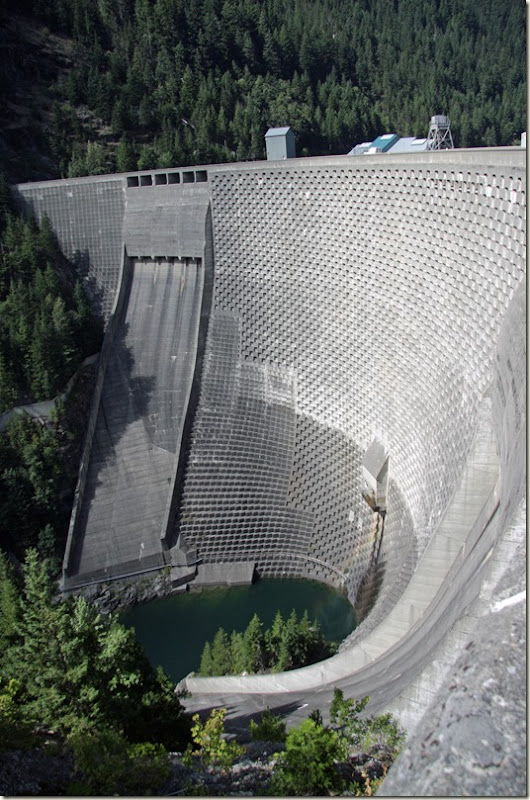 We thought that we should go back to see if the Diablo dam was lit after dark but when the time came we just couldn’t work up the energy.