What started out looking like a rest day turned into one of the most awesome ones yet. Whether you want to call it luck or coincidence but it was a weird day. I am going to number what I think are those moments.

I got up early to turn on the heater and looked outside. It was very dark with low hanging clouds so back to bed to sleep in late since it had been a long week.

After getting up and puttering around for a while I started to look for things to do on a lousy day. I saw the ad for the Mount Rainier Scenic railway. You get about a 2 1/2 hour ride on on old train pulled by a steam locomotive for about $20 and it was only 15 minutes away.  The next one left at 1:00 pm. By this time it was 11:30 and they said to be there 45 minutes before departure time. So we rush to get ready and head over to see if we can get tickets.

For starters (1) the 10am one and the 4 pm one we full but ours had room, which was unusual for an August weekend. So we line up on the platform and wait for the train to return. 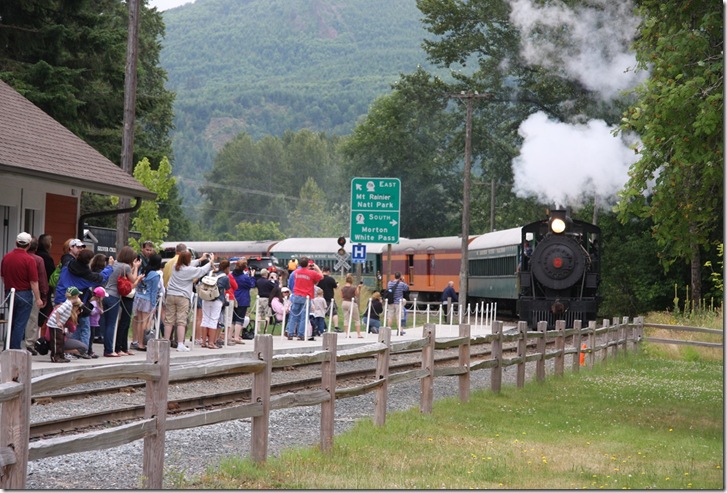 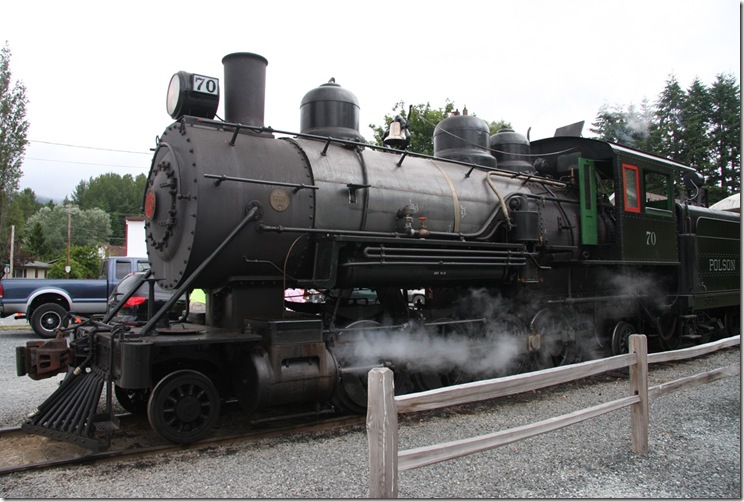 We were in the middle of what we thought was the line to get on but of course the train pulls up and the place to get on is right in front of us (2).

They have one car that is open (has no roof)  so of course we went for that one. On the previous trip the engine was on the far end of the train but they move the engine to a siding and (3) put it on the end right in front of the open car.

Lots of steam and smoke. 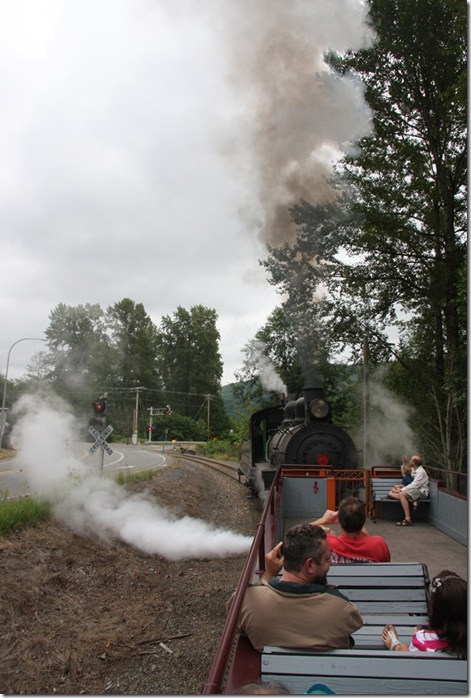 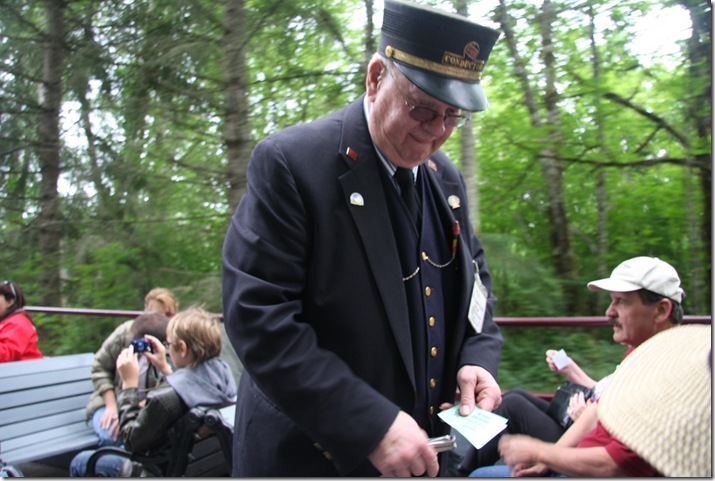 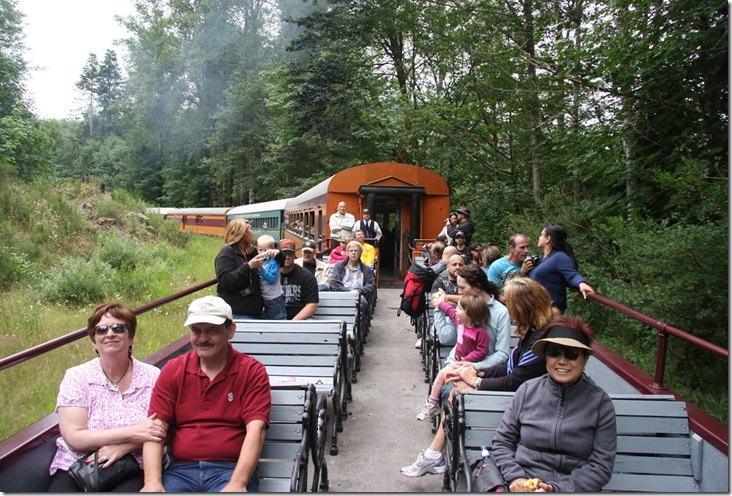 You ride out to this small lake and you can get off for about 15 minutes to look around. We decided to stay on the train (4) as it didn’t seem very interesting.

I wandered up to the front of the car (5) just to look at the engine and see that they seem to working on something. 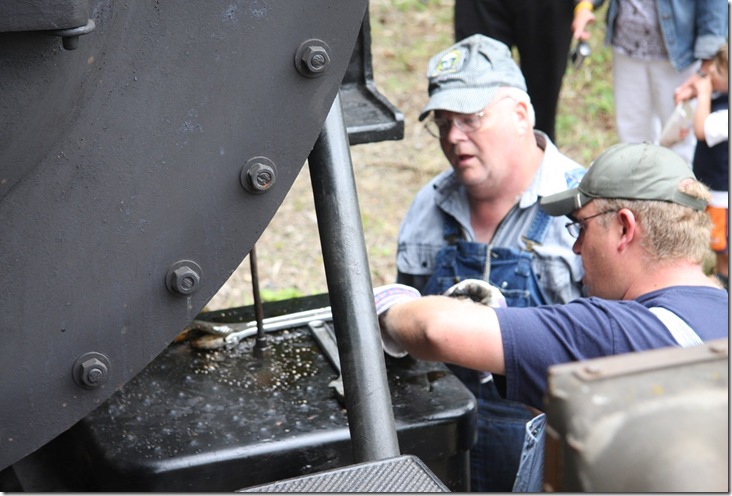 I hear them talking on the radio to the shop and it seems a pressure restrictor in an oil line is clogged (6). They are told to use a stiff wire or paper clip to clean it out.  The engineer goes to the cab but can’t find anything (7). I run back to Jennie and she does have one (8) in her purse. I go back up and yell that I have one (they are still back in the cab). They come back and thank me, clean out the gunk and put it back together.

Now he said without it they would have had to wait for the maintenance guy to come but I am sure that someone else had a paper clip but I was first (9).

Then he looks up at me and asks if I would like to ride in the cab on the way back. ARE YOU KIDDING ME!

Now they normally allow 2 people to ride in the cab, a different set each way and the ticket price is $70 a person. I asked Jennie if she wanted to come but with all the smells she decided to stay in the back.

Well I spent the entire time going back grinning from ear to ear like a fool. The paying couple and I stood on the platform between the engine and the tender with a great view of what they were doing. The engineer had been around and working with steam engines since he has 8 years old. He said he actually trained on this exact engine. 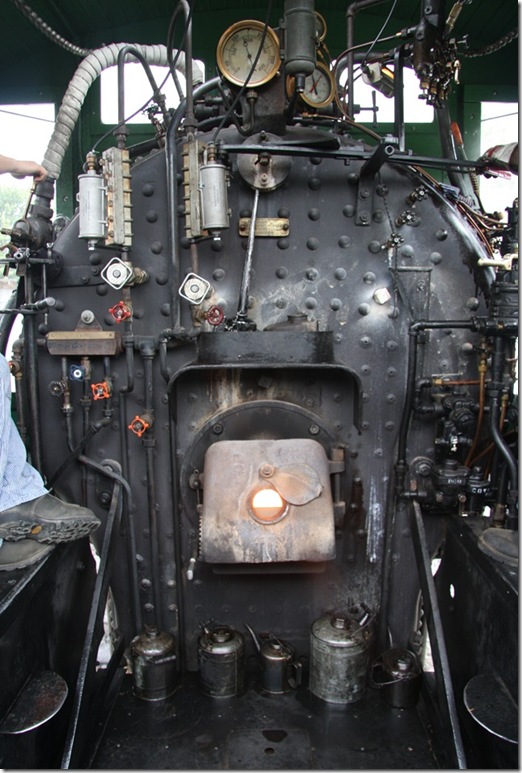 I hung out the side to take some pictures of the people in the cheap seats. 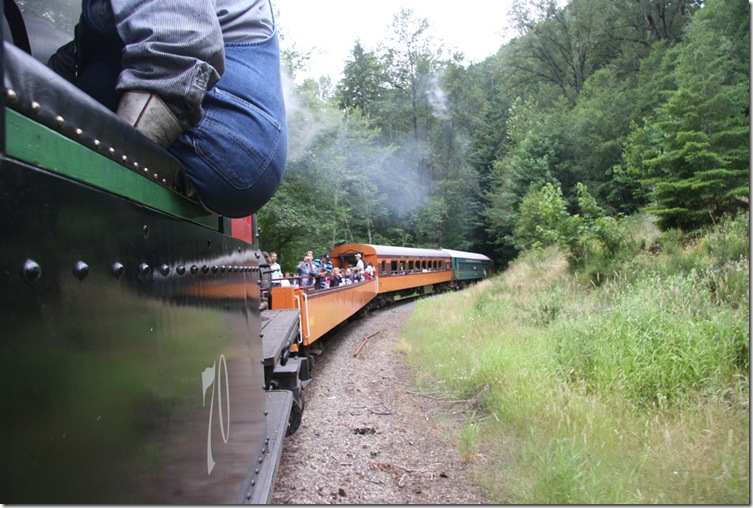 One neat and kind of scary thing was that when the engine was working hard, on every chug, flames would pour out of the firebox. I put the camera in high speed mode to catch it at the right moment. 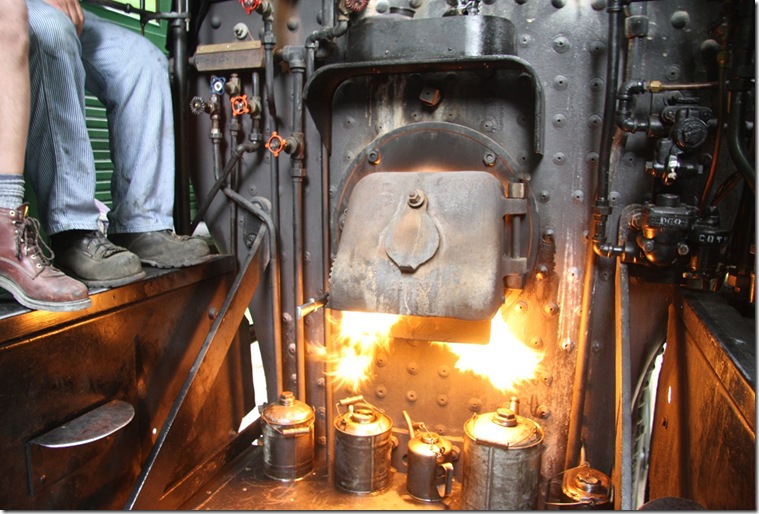 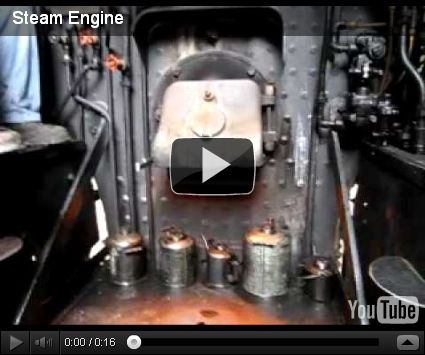 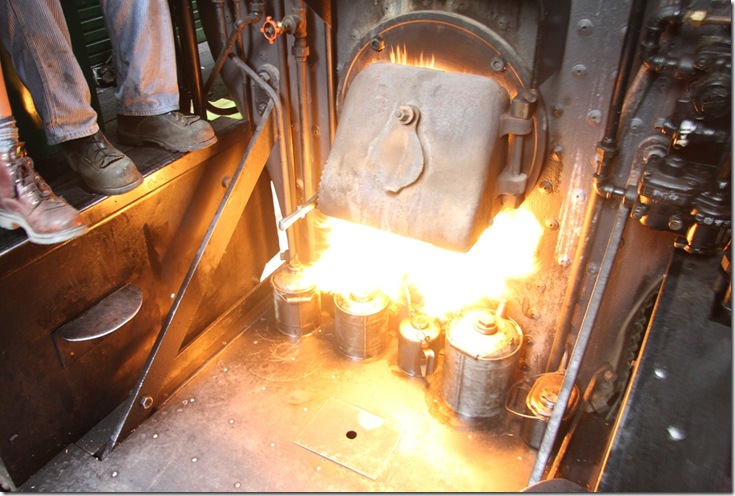 Notice those cans underneath, that I would guess are filled with oil.

Once we got back to the station they asked if we wanted to stay on while they switched the engine back to the other end for the next trip. The couple left but I ran and got Jennie and she jumped on board. 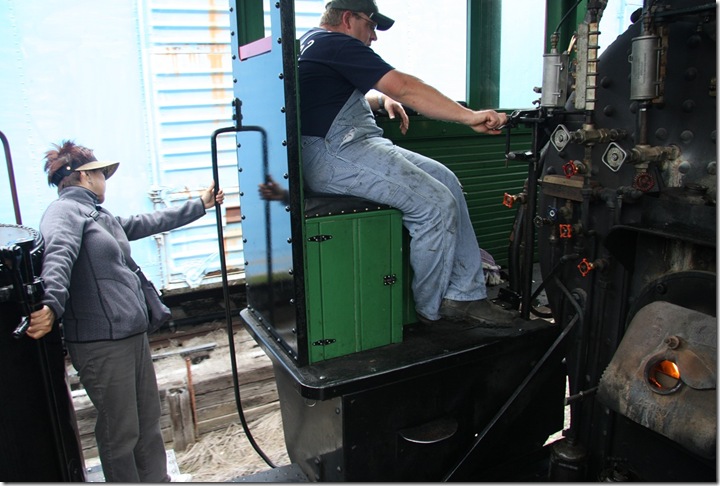 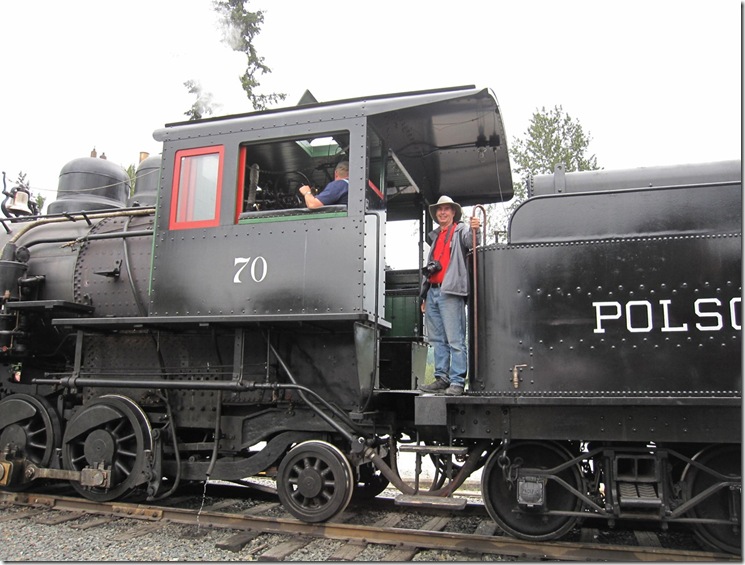 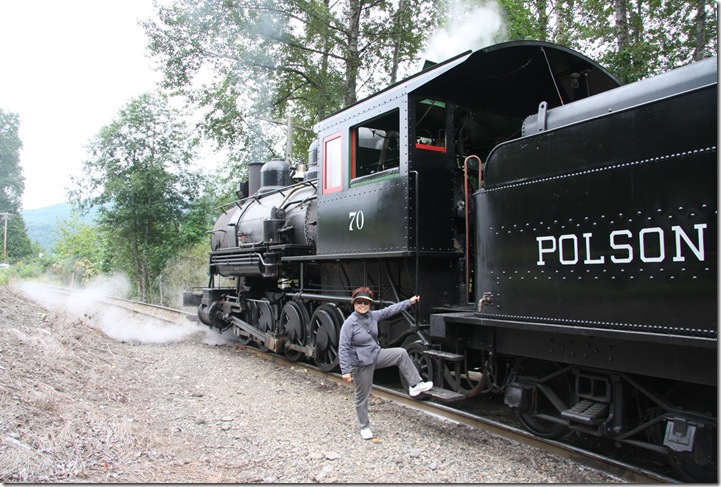 Wow! It is many hours later and I am still feeling kind of giddy.

On the way home we stopped at this metal artist’s house where there were many of his sculptures on display in the yard. 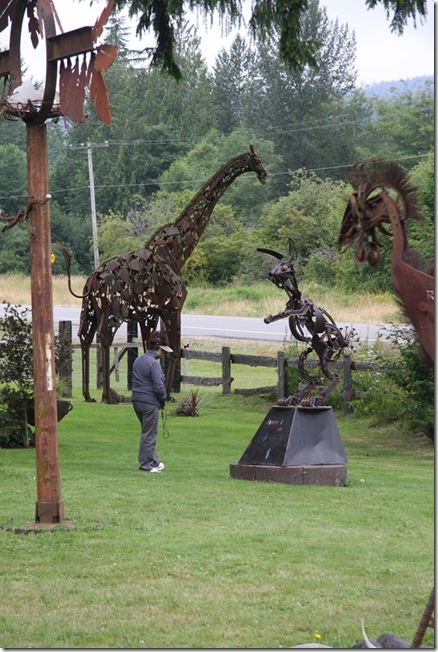 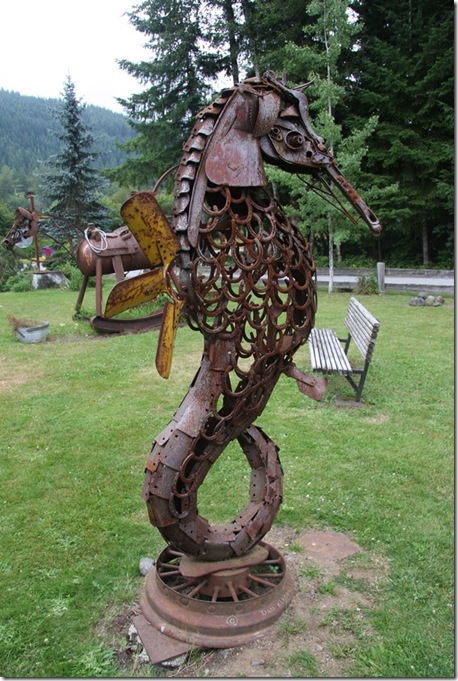 I would normally put a lot more pictures of his sculptures but this is already a very long post.