May 24 – Stone Mountain Provincial Park, BC

The internet is not everywhere so some posts have been delayed until we found cell coverage or a WIFI hotspot.

Boy, am I glad we waited a day. It was mostly sunny with a few clouds. Later in the day we got a bit of rain and hail but we were safely ensconced in the RV by then.

We hit a bit of a snag trying to get away this morning. When I tried to hook up the CRV, its battery was completely dead. I can’t figure out why either. I checked that nothing was left on. It’s a mystery! Thankfully it was in a place where I could maneuver the RV close enough to use my jumper cables. Then we were off.

The first part of the road out of Fort Nelson was quite narrow with no shoulder with very steep ditches. No daydreaming here. 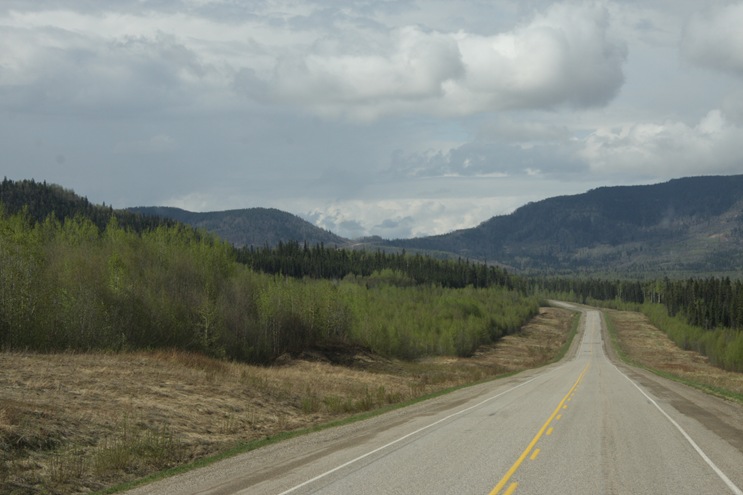 You know you are about to start climbing when you see one of these signs and there is a pullout for the truckers to put the chains on. 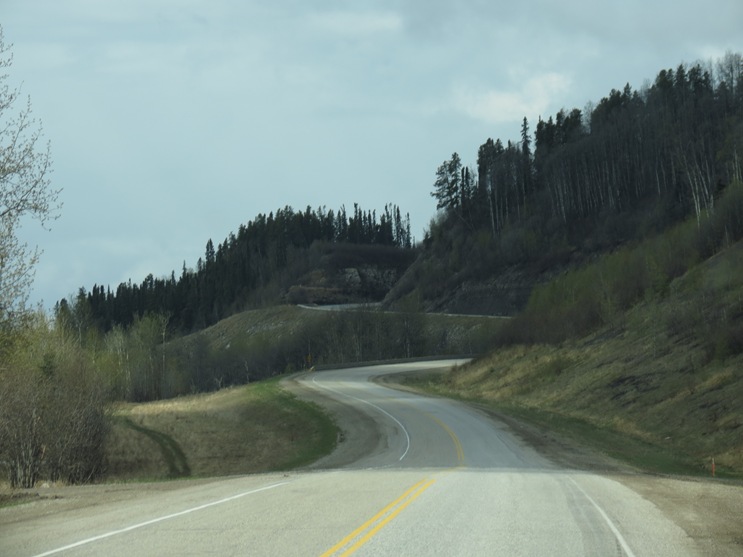 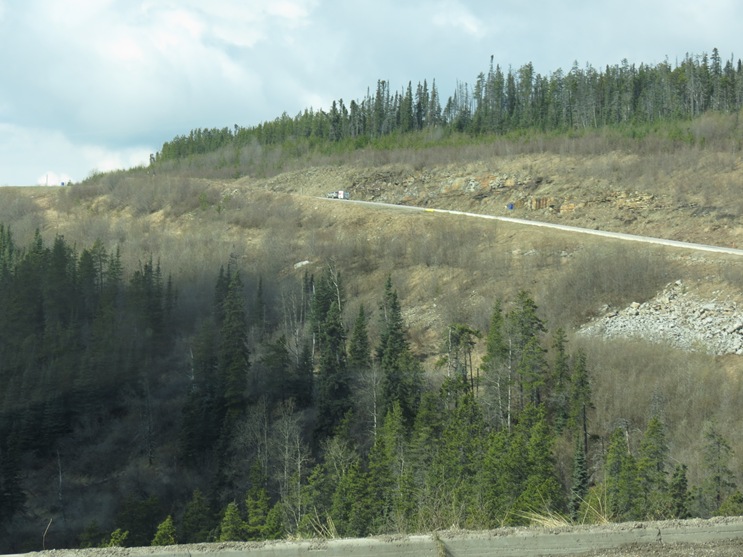 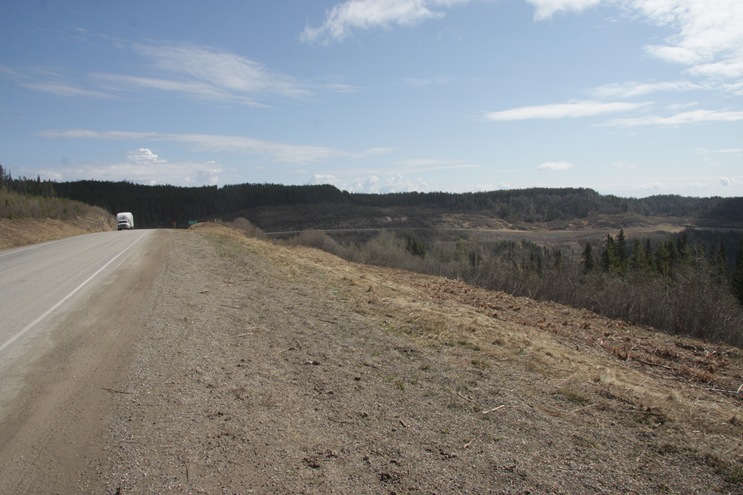 The long distance views were great. The pictures can’t do it justice. 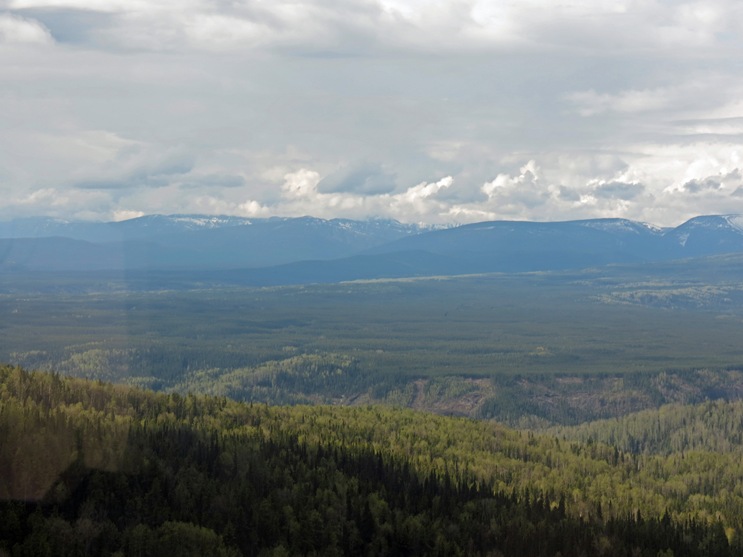 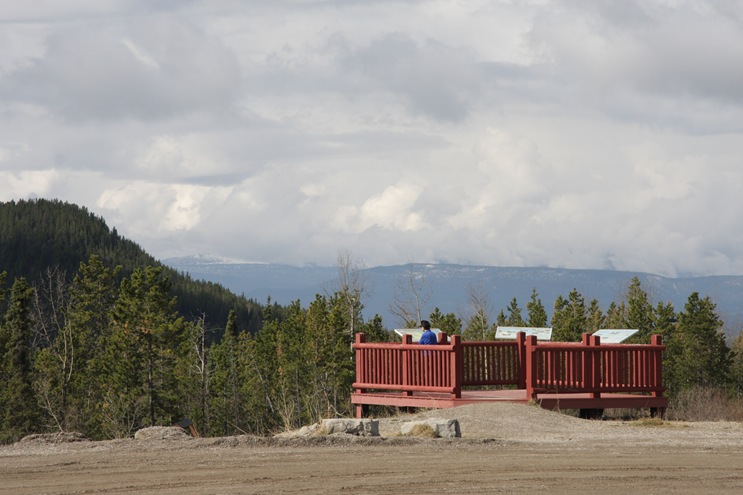 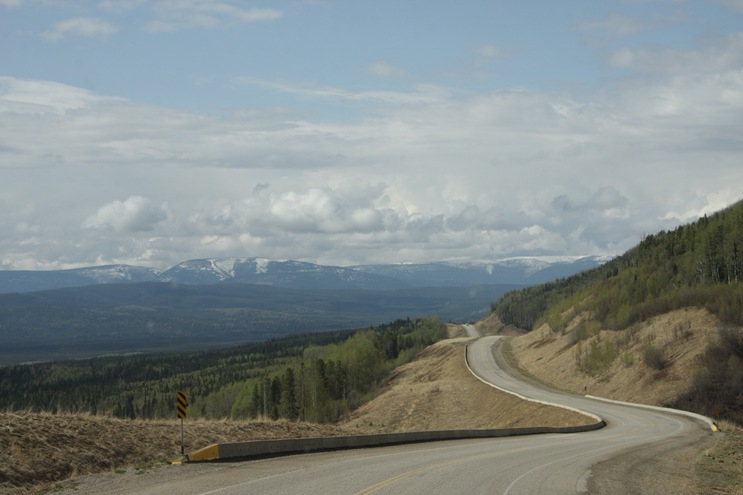 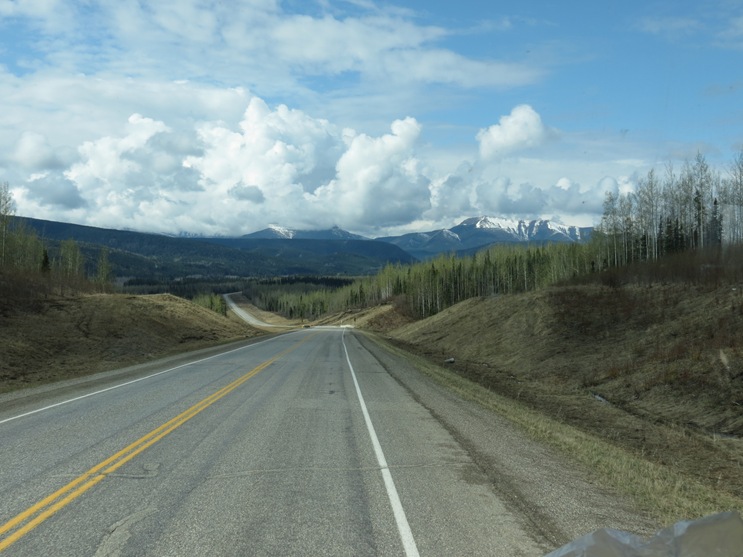 All the books say you have to stop at the Tetsa River Lodge for cinnamon buns, which they claim are the best in the Galactic Cluster. 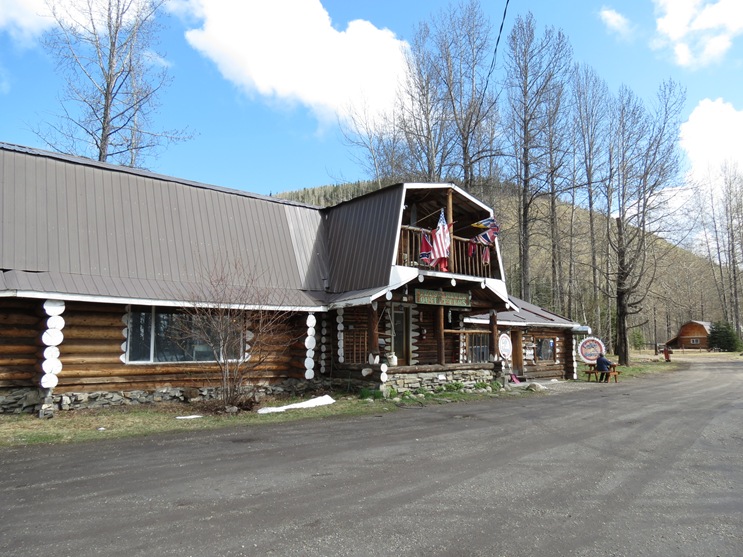 They were very good but for $5 each they had better be. If they had been a bit less we might have gotten some to take with us. 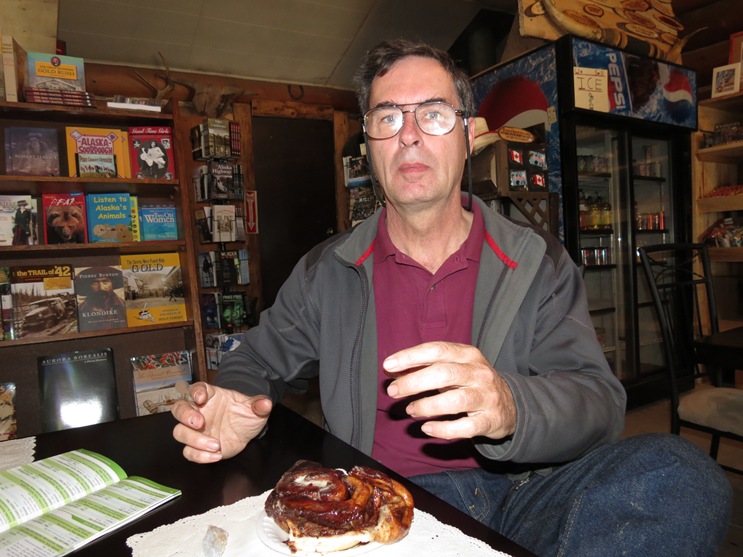 Our fill up the morning at Fort Nelson was $1.44 a litre. I guess out in the middle of nowhere, the lodge can charge what they want. 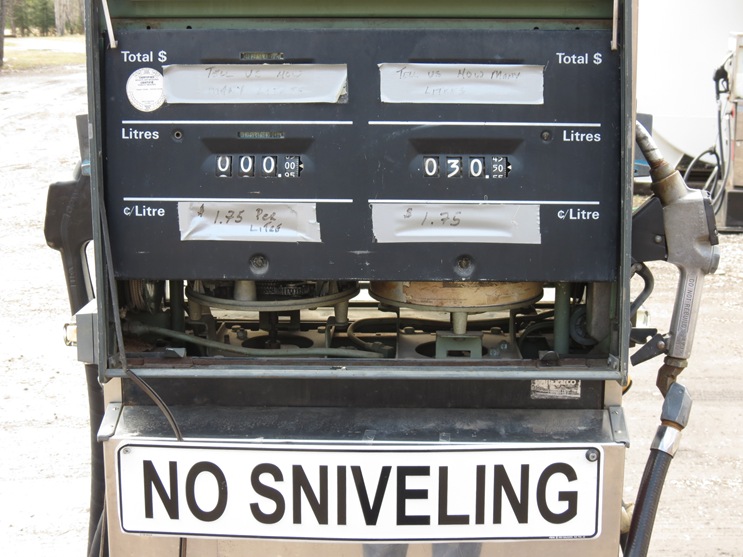 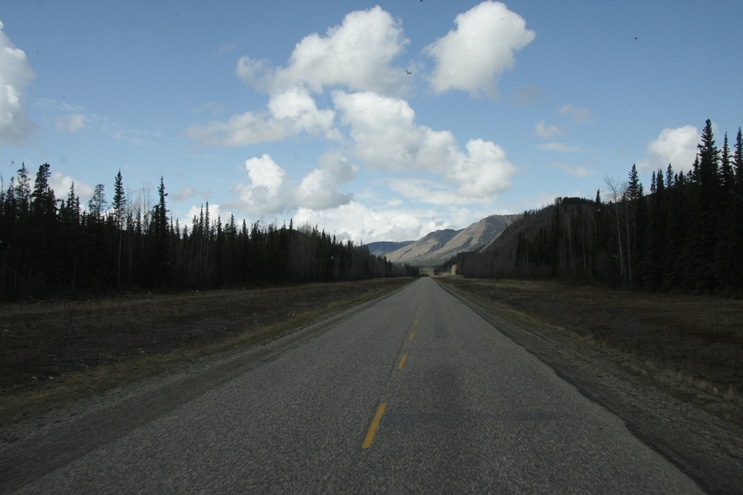 Then we continued up higher. 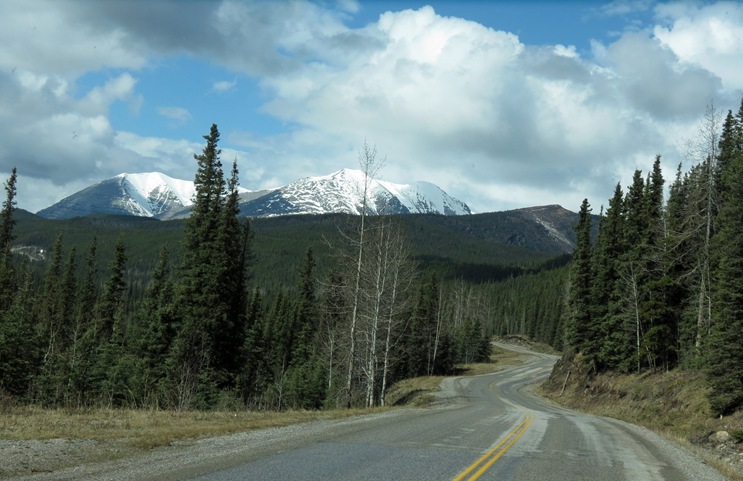 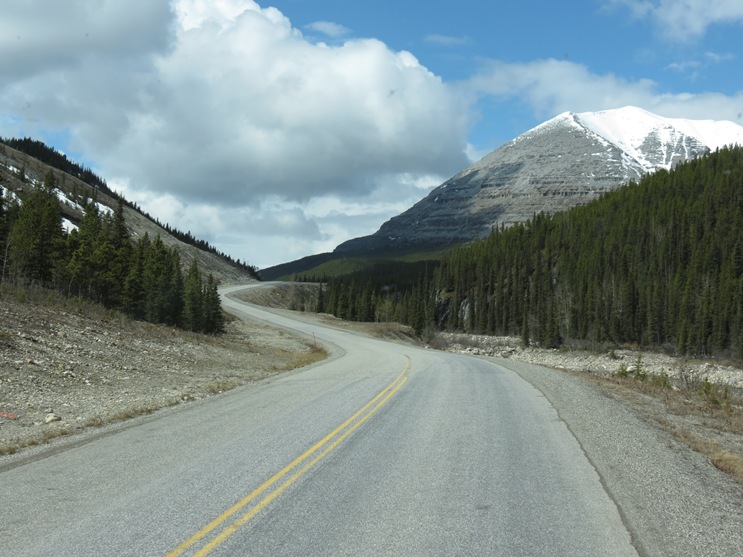 This is our campsite at Summit Lake at Stone Mountain Provincial Park. This is the highest point on the highway. It is only about 4200 feet but it is quite a bit more “wintery” here. The lake is still very frozen. 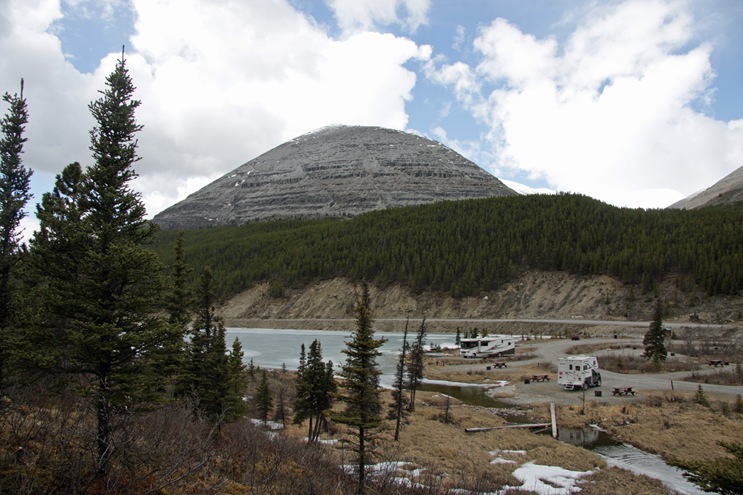 It is views like this out our front window that make me glad the RV is very self contained and we can camp quite comfortably just about anywhere. We even get a satellite signal. How civilized. Since we got here around 1pm we decided to try part of one of the hikes. The full hike goes to the peak on the middle of the picture below and takes 5 hours. We were just going to go enough to try and get some views and come back. 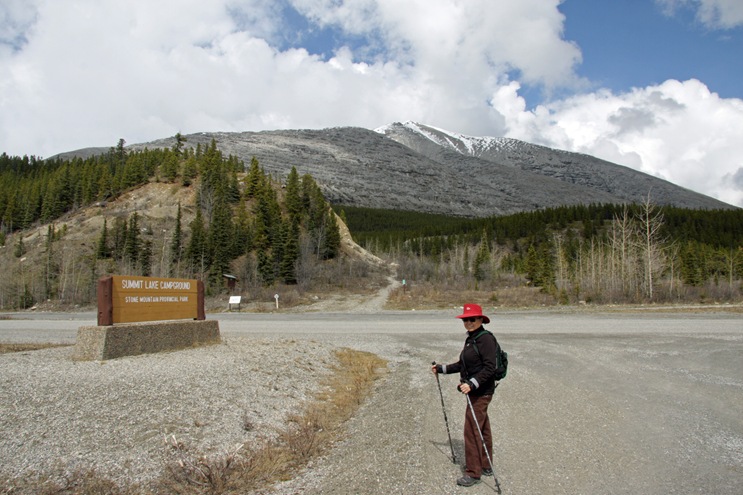 Less than a kilometer in, the trail comes to the banks of this stream. We can see the trail on the other side but can see no way to get across so we started working our way up to see if it narrows anywhere. 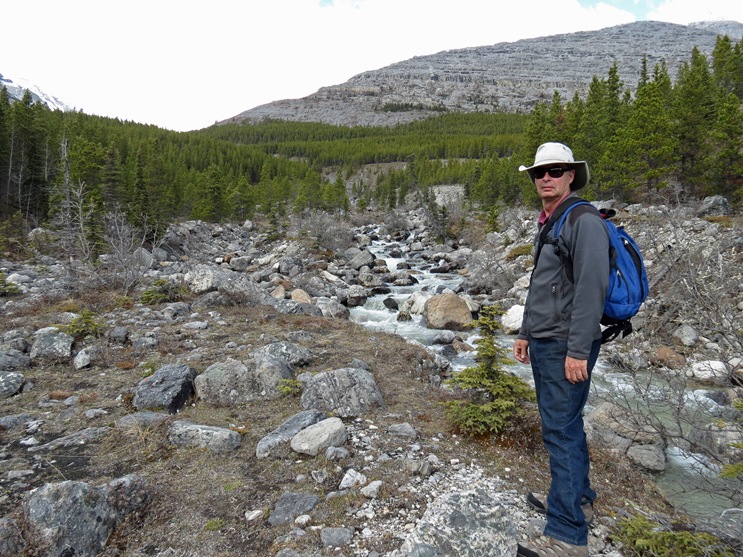 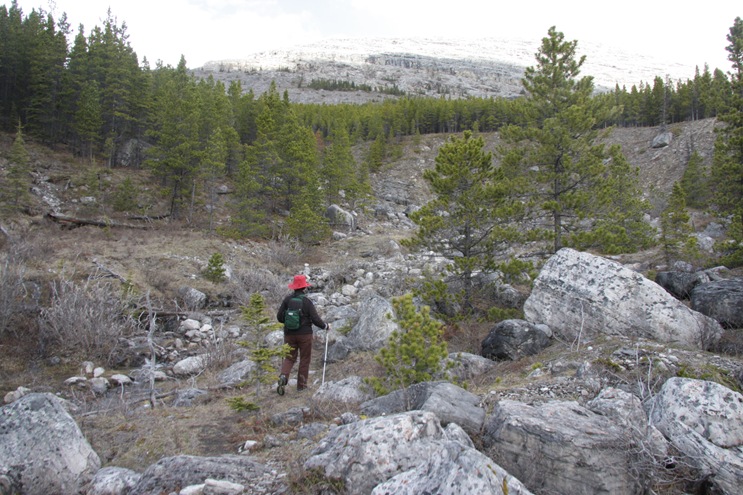 Once we got to this spot in narrowed but it was a deep gorge. Then we saw some people on the other side. We couldn’t hear them but they motioned that there was nowhere to cross up here and to go back down. 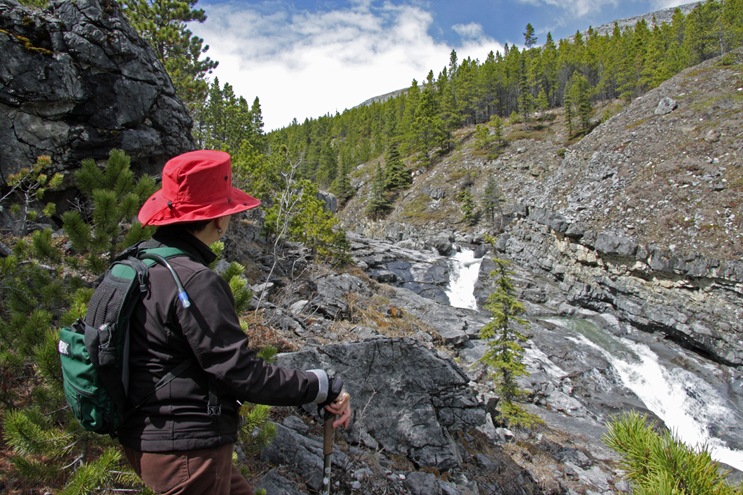 We followed them back down assuming they they knew where to cross but it soon became apparent that they were stuck over there. 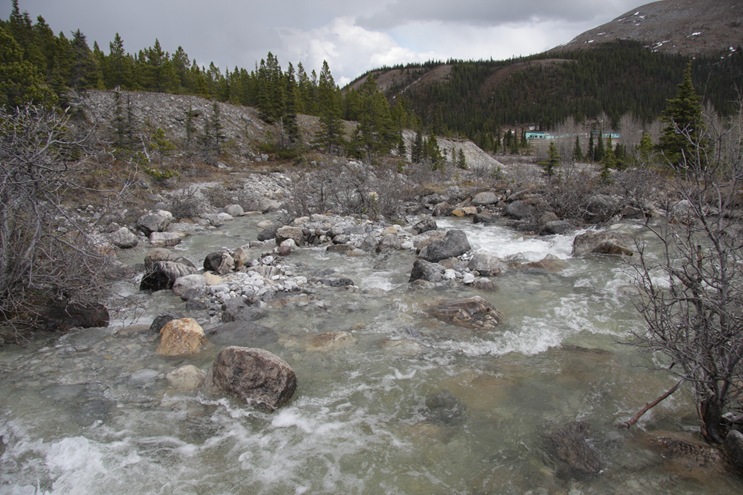 At one point I found the remains of some structure with this fairly sturdy looking board. I hauled it over to the stream and found a spot where it would let us both get across and motioned for them to come back. They were vey glad to get back on our side. They said they had had to go very far up the stream to find the crossing that first got them over. By this time a bit of a cold rain had started so we decided this hike was just not meant to be and headed back to the RV. 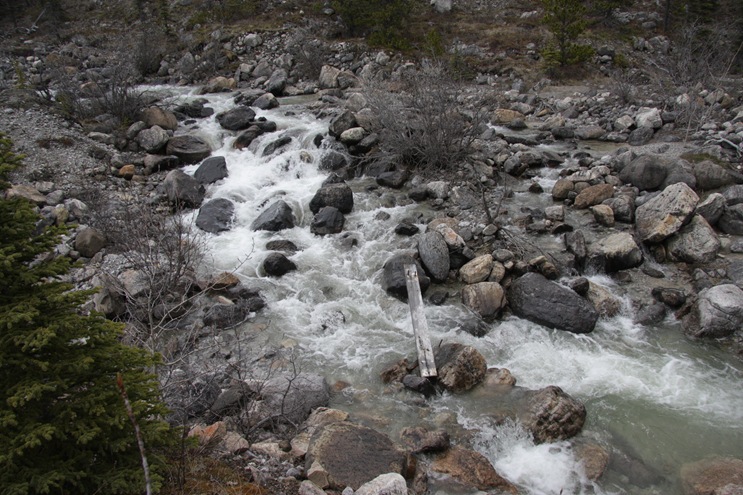 In the evening the campground has filled in some more. There are even a few people in tents and one girl sleeping in her car. It is about 5C now and is supposed to get colder. You can see a bit of hail on the ice. 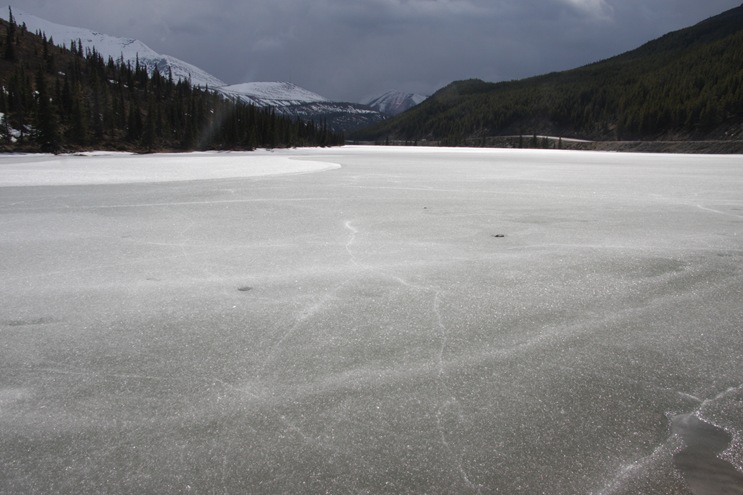