It was a little cool and partly sunny but we just weren’t feeling like doing much so it was a restful day.

This evening we went over to the Richmond Night Market. It runs all summer on Friday, Saturday and Sunday and only opens at 7 pm until 11 or 12. Since Richmond has a large Asian population most of the booths are Asian themed.

I had heard that it gets very busy and they weren’t kidding. We drove over and got in the admission line at about 6:30. 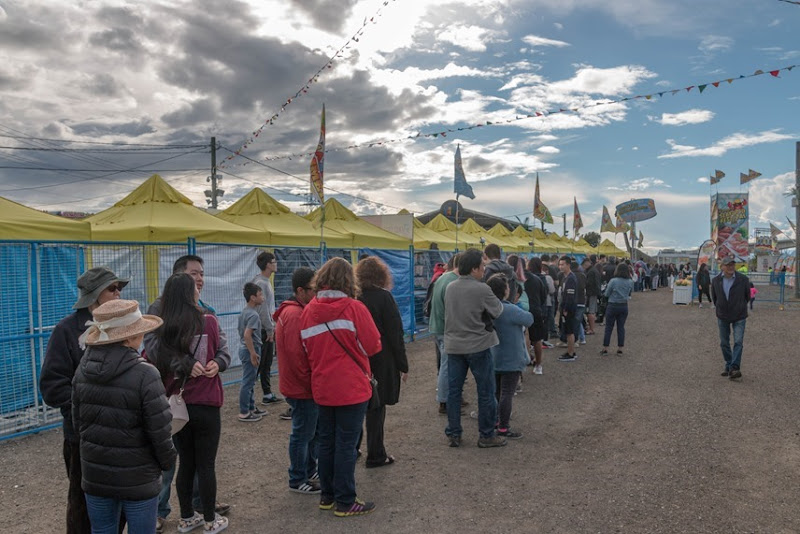 By the time it opened at 7 the line was at least 5 times this length. When we left at about 9:30 there was still a line up about this long.

It turns out that we really didn’t have to line up by the admission booths because seniors (60+) are free and we could have just shown our id at a different gate.

The market is divided into three sections. Food booths, stores and an arcade. The website says that they have 100 food stalls and 200 vendors total.

Everybody heads to the food booths. The lines weren’t too bad by the time we got there. 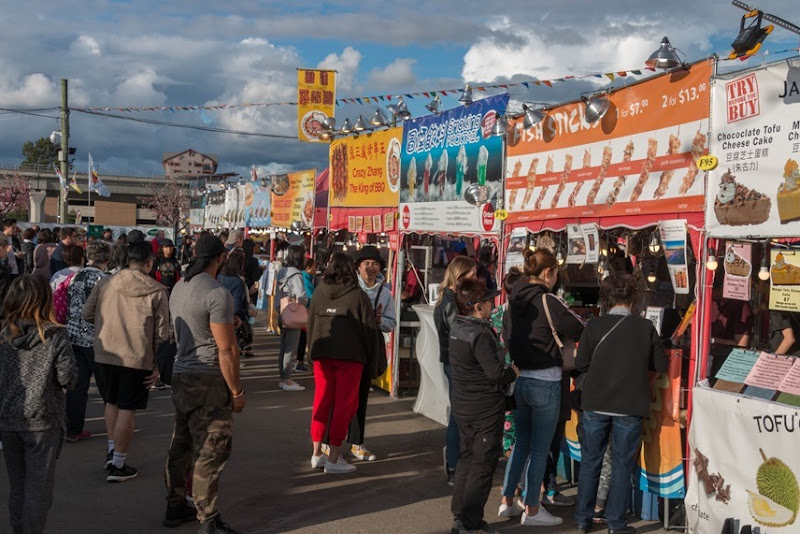 First up was a skewer of beef and one of fried fish. Not cheap but both very good. 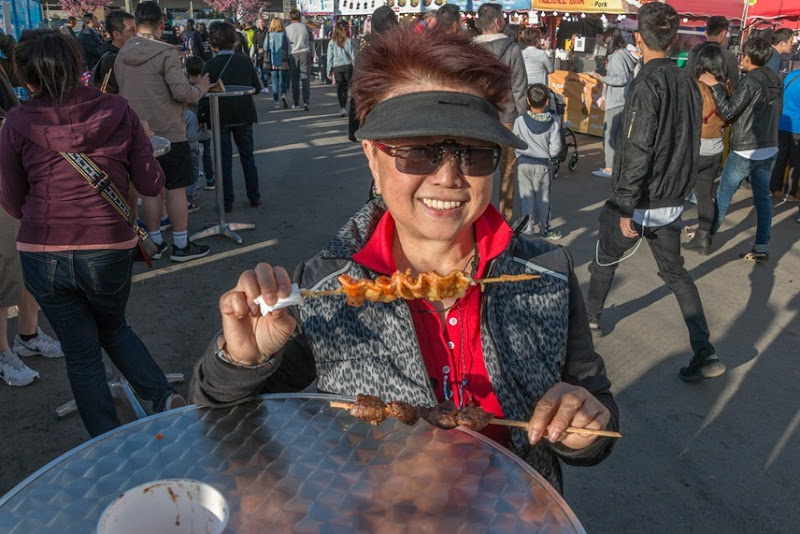 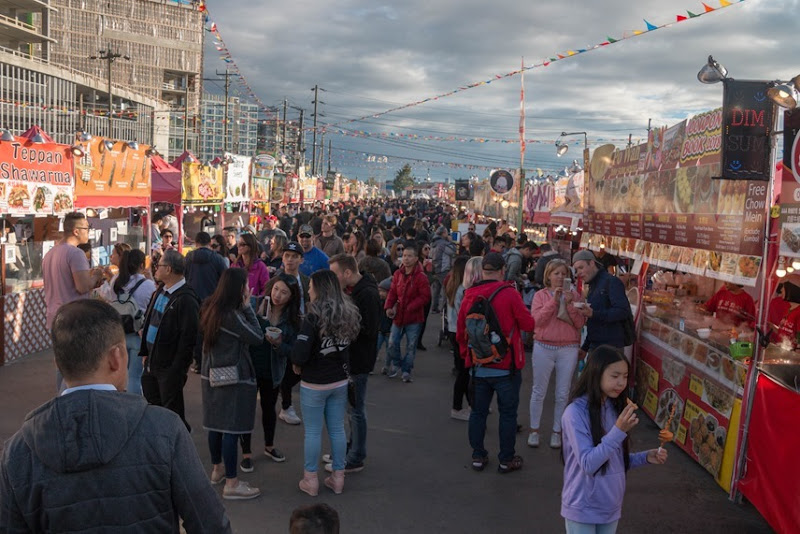 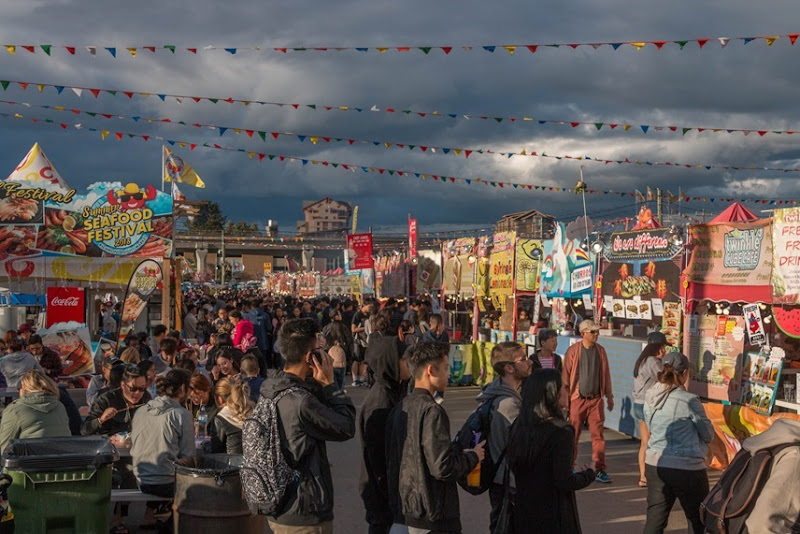 I can’t remember what nationality this crispy chicken bowl was supposed to be from. Again, pretty good. 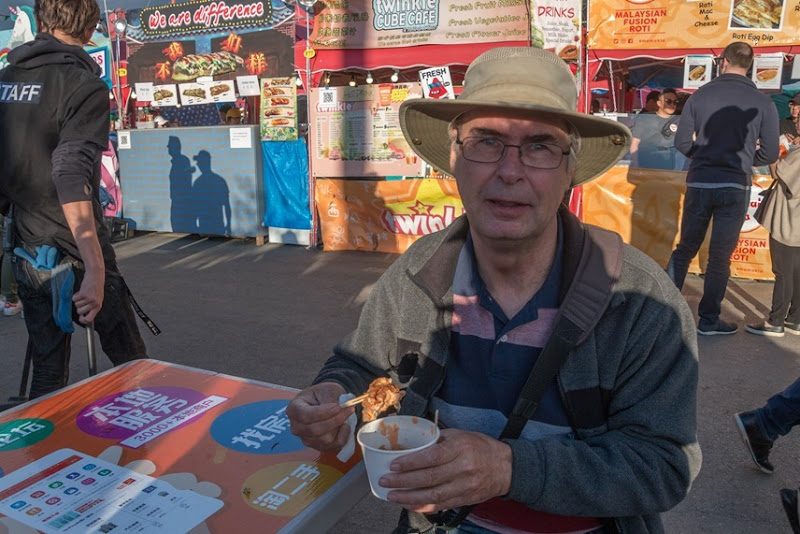 We next tried something at a Korean Booth. It was supposed to be Kimchi and I can’t remember what else but when we got it, it looked nothing like the picture. It was a pancake with something green in it but we couldn’t tell that it was kimchi. A big disappointment. No picture for you!

They had some dragon dancers roaming the aisles. 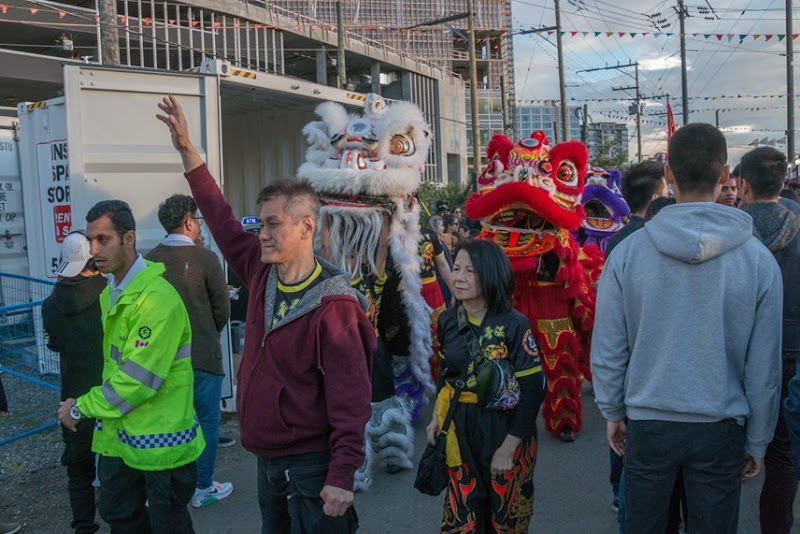 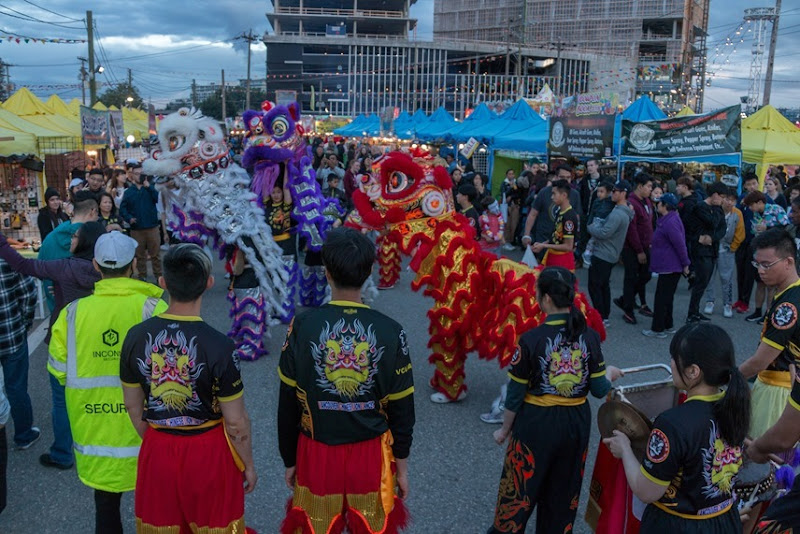 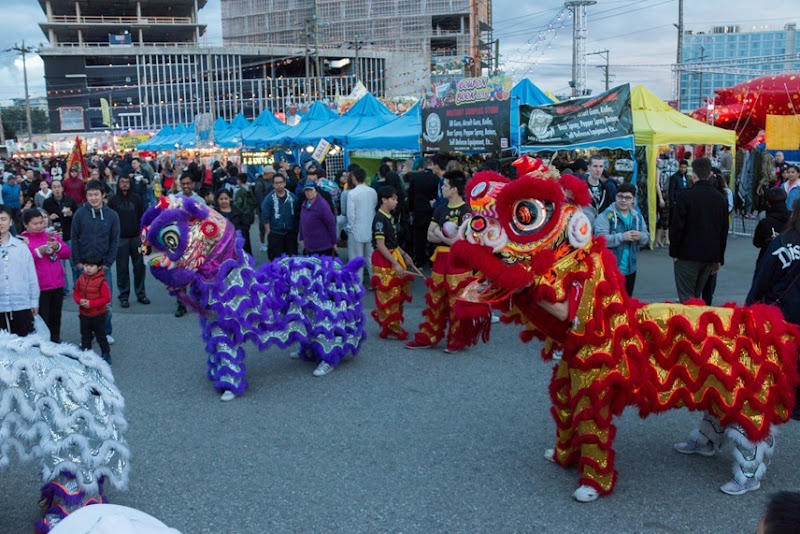 We couldn't understand why this place, that made the spiral cut potatoes on a stick, was by far the busiest stall in the market. Just about the most boring food in the whole place. They even had a roped off line. 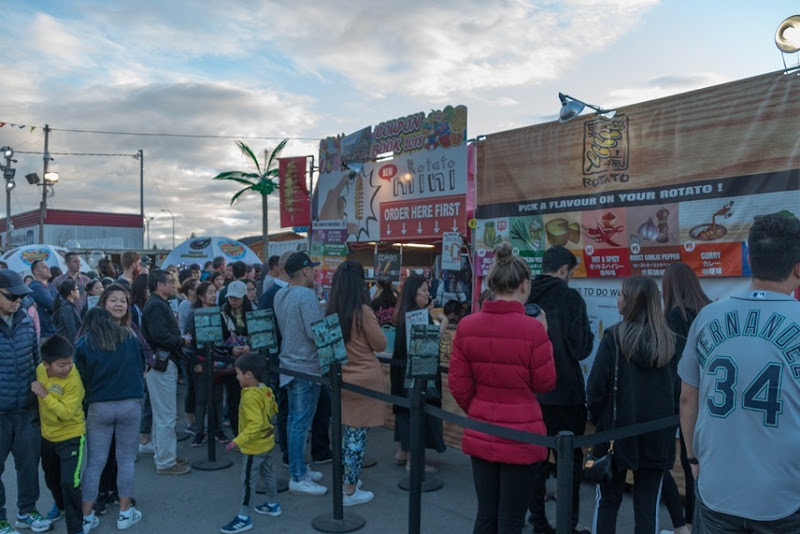 The last thing we tried before we were full was this thing called a spicy chicken fusion wrap. 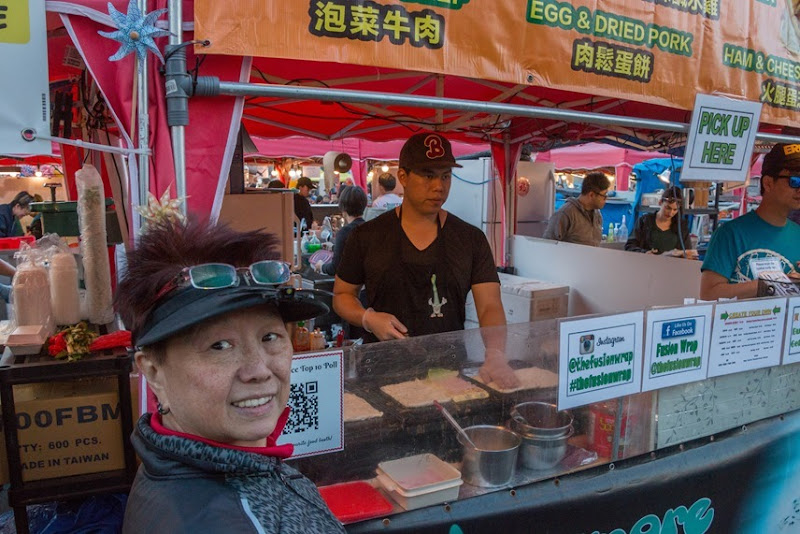 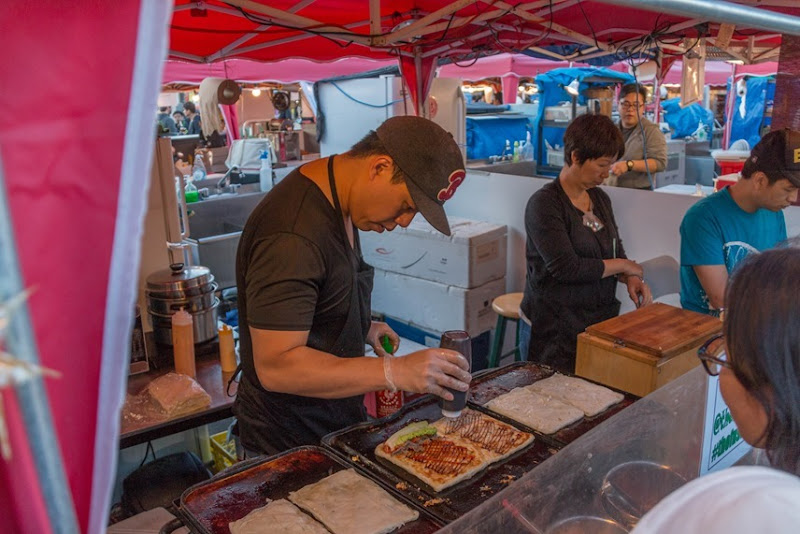 Very good and very filling. That was enough. 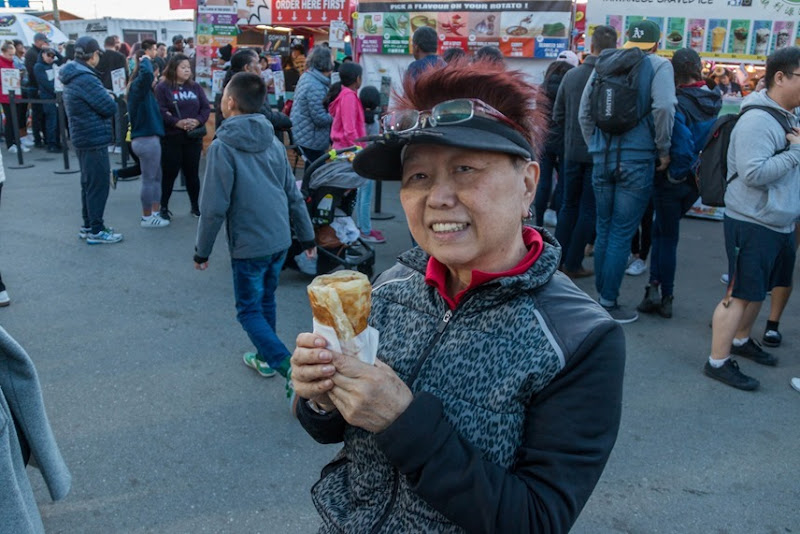 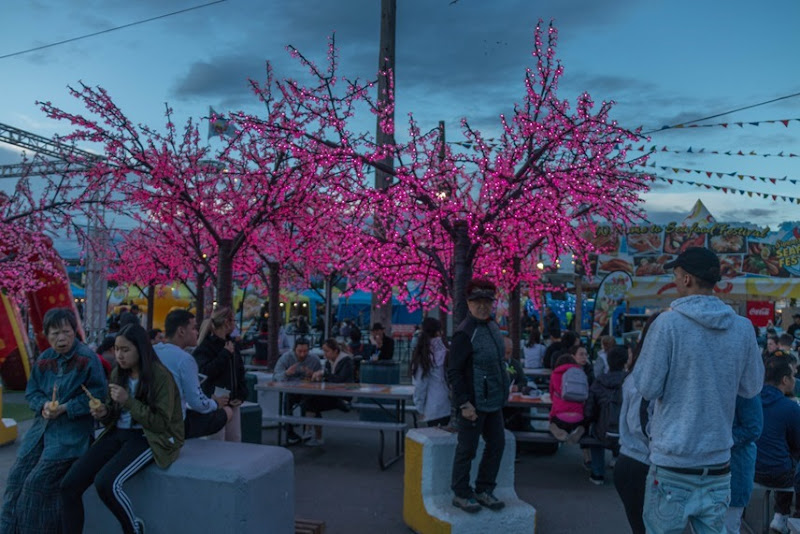 We walked through the arcade. The standard stuff that is almost impossible to do.

At the ladder climb we could see the attendant hold the ladder at the start. 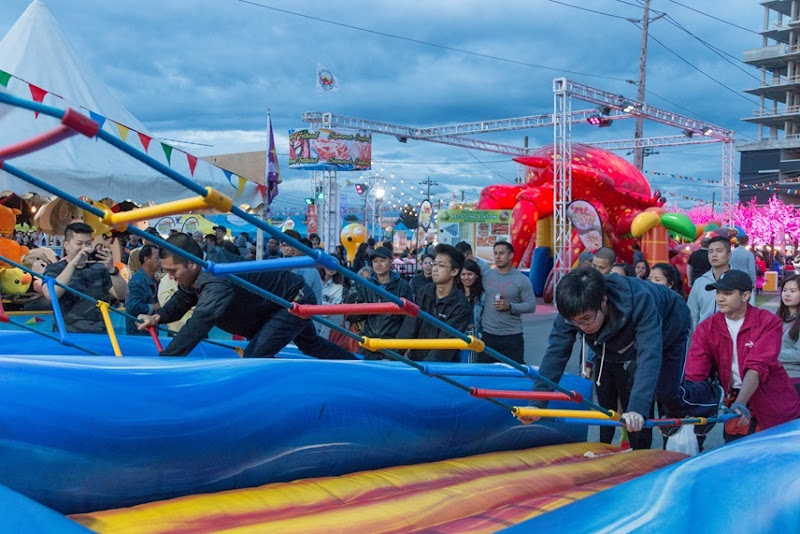 But as soon as he let go. 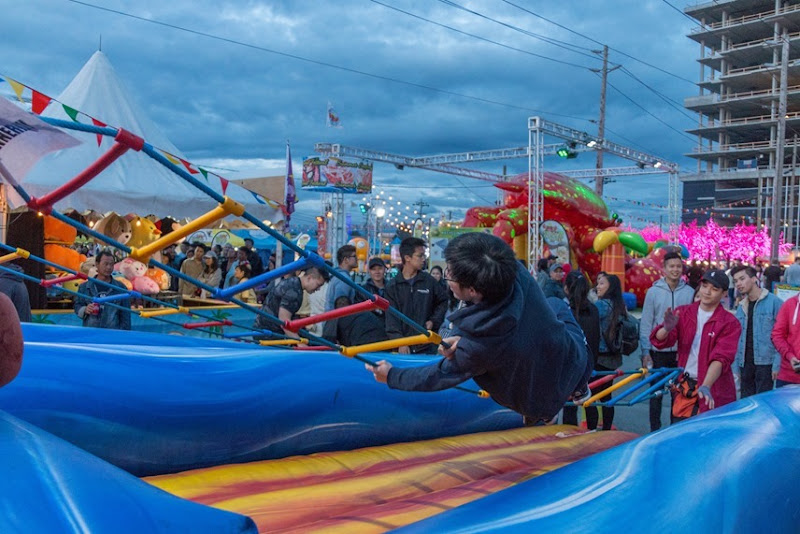 There was a large stage near the entrance where a succession of Chinese dancers performed. 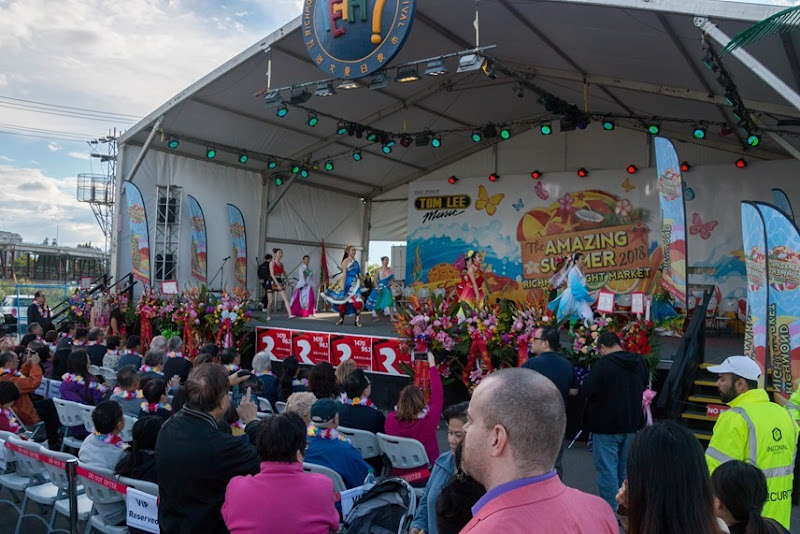 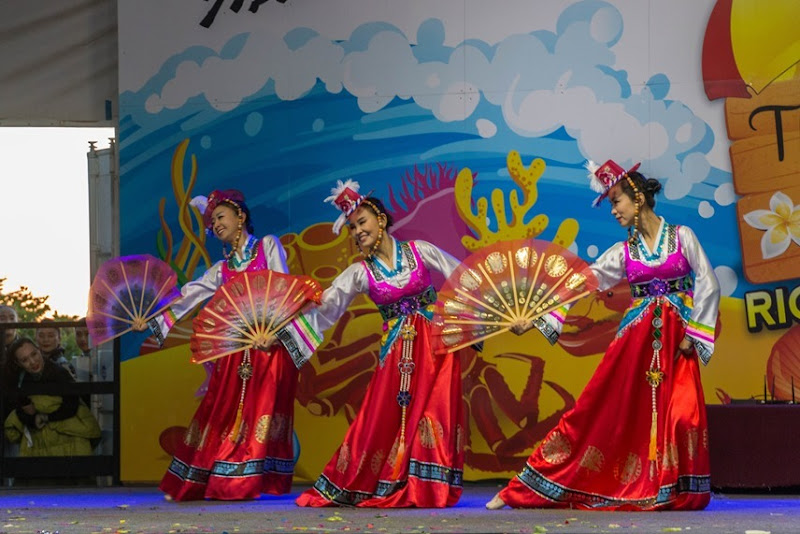 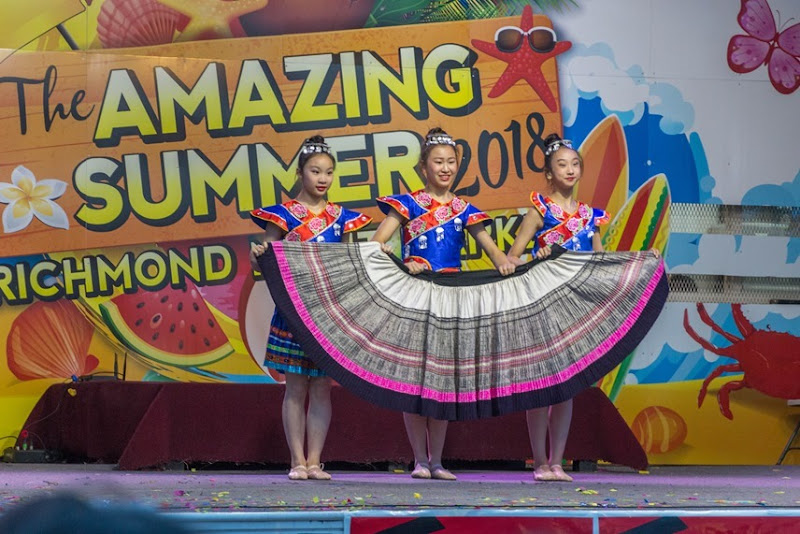 Walking through the vendor booths, this guy created some amazingly detailed metal sculptures. 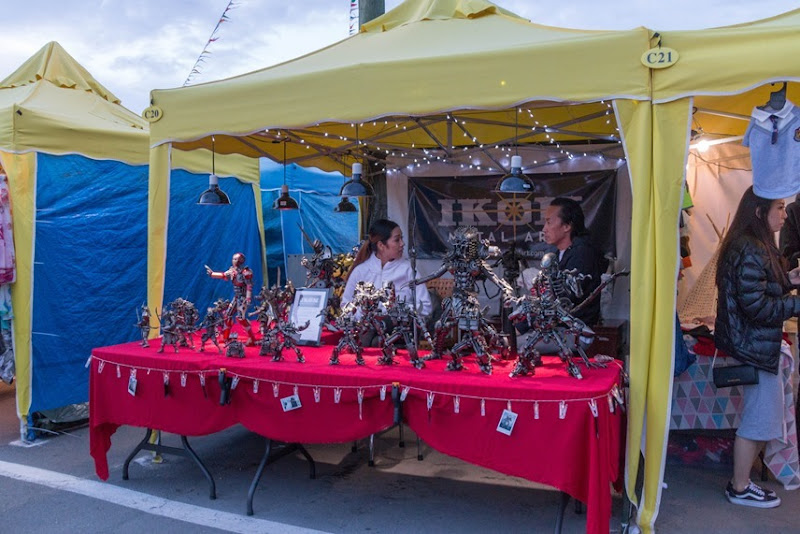 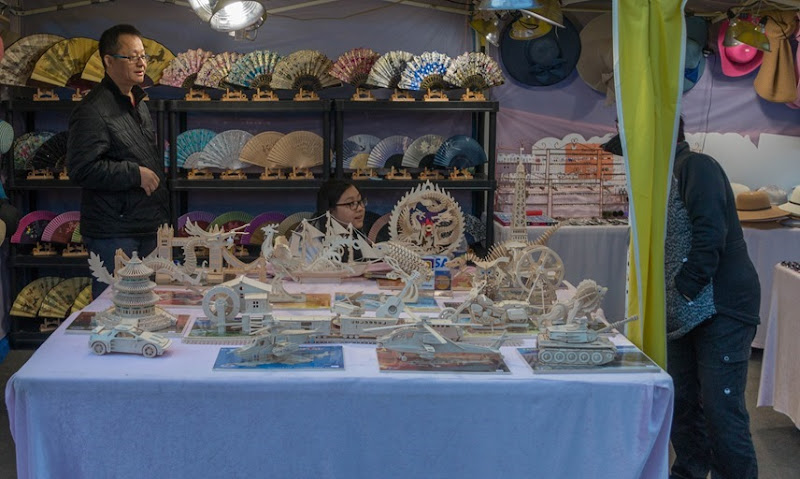 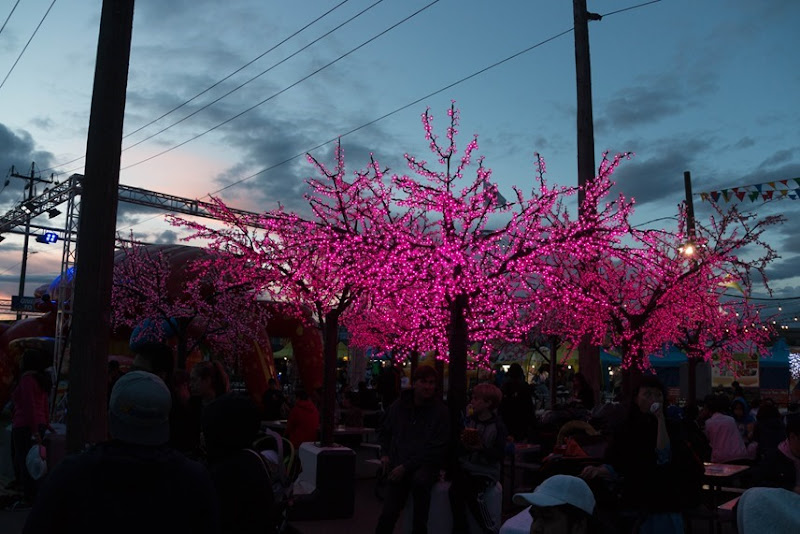 It looked like there was a nice sunset off in the distance. 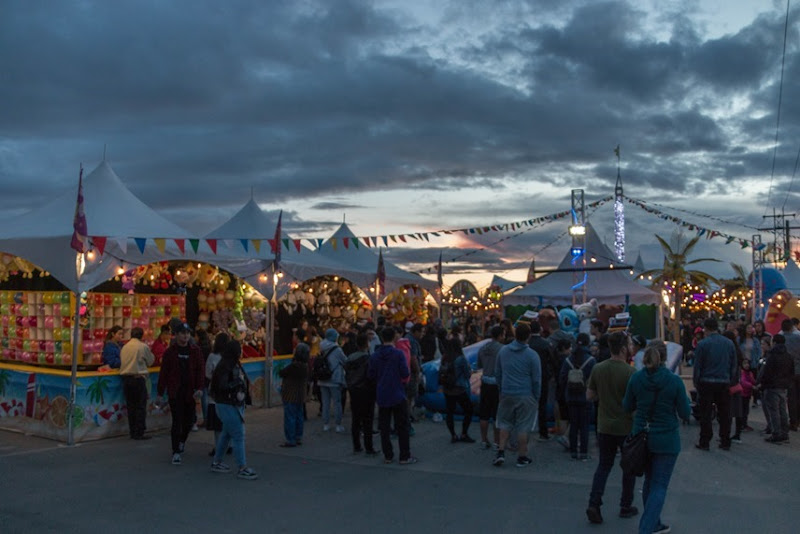 The souvenir of the day seemed to be these LED lit balloons. 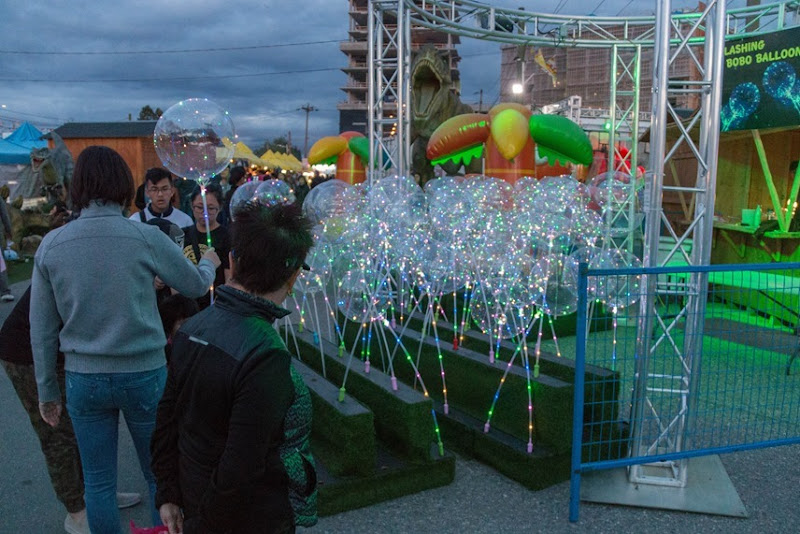 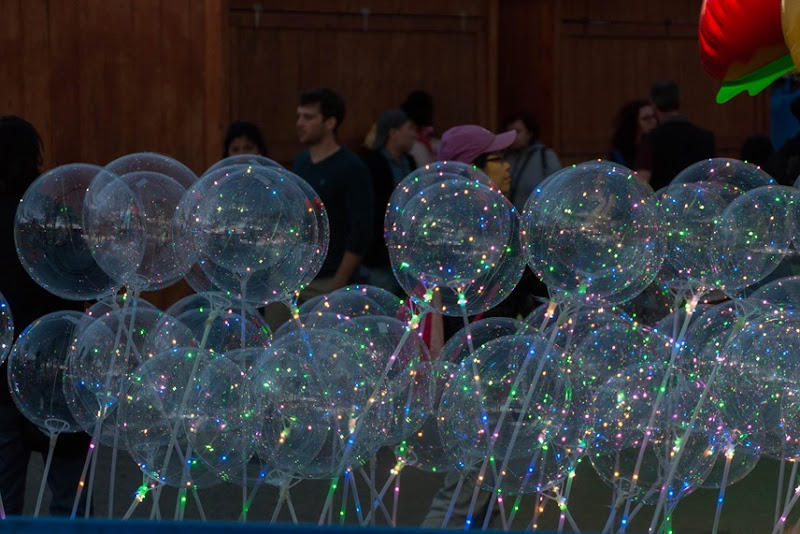 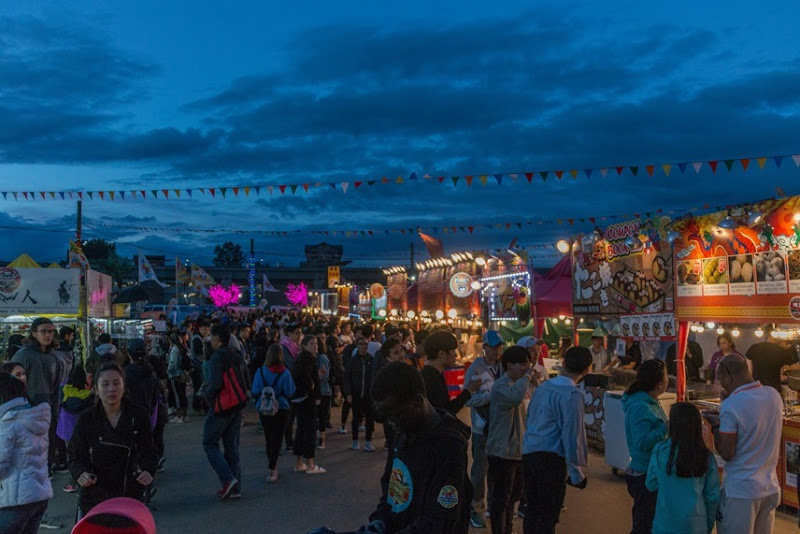 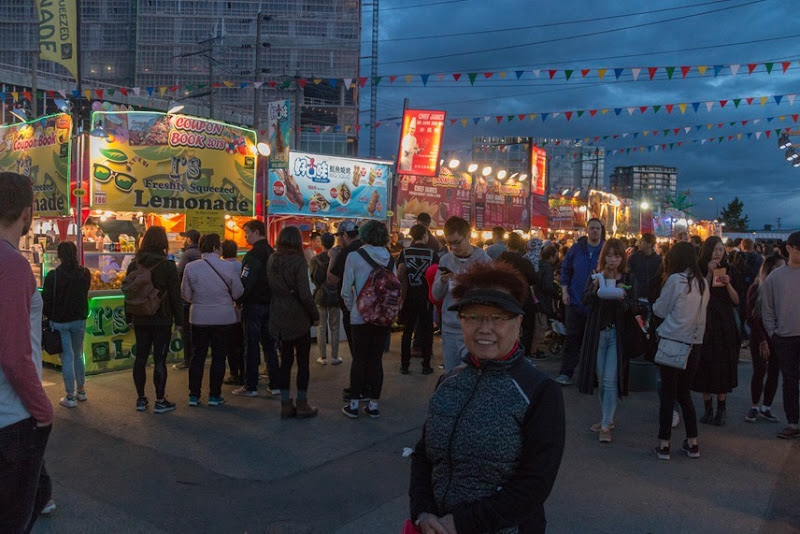 By 9:30 it was getting a bit cold and we had seen everything we wanted to see so we headed home. 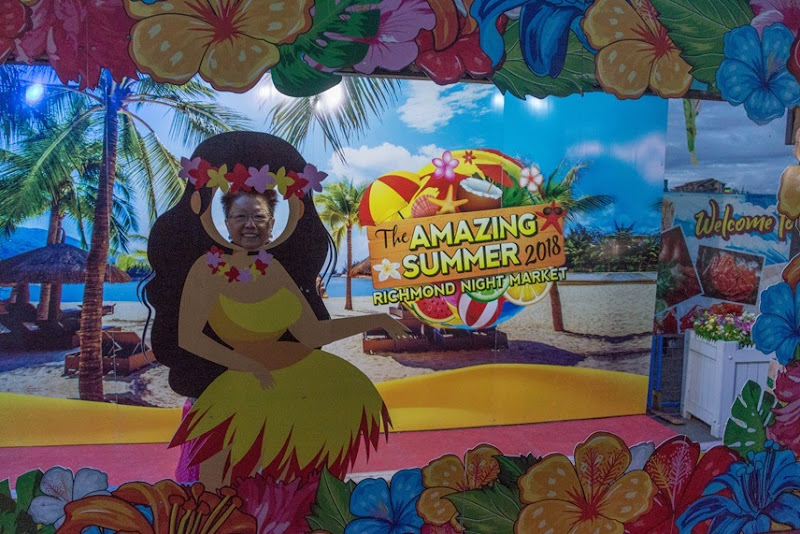